Scout report: What can Newcastle fans expect from Alexander Isak?

Over the last 48 hours, we have seen news break that Newcastle United are close to securing the signing of the Swedish international striker Alexander Isak from Real Sociedad for a fee reported to be in the region of £60M. This move represents the first real signal of intent from Newcastle since the club became one of the richest in the world following their takeover by a Saudi-backed consortium.

While some onlookers felt that we would immediately see the English side acting aggressively in the market we have instead seen a more measured and even intelligent approach to recruitment. This involved deals for the likes of Kieran Trippier, Nick Pope, Bruno Guimaraes and Sven Botman, all players who represented significant upgrades on the players already at the club.

The same measured and intelligent approach can be seen in the coach’s dugout. As with player recruitment, there was a sense around the footballing community that Newcastle would look to appoint a ‘name’ when they parted company with Steve Bruce. Instead, after a relatively in-depth search the club turned to the former Bournemouth and Burnley head coach Eddie Howe. There were many who thought that Howe would act as a placeholder in the job but very quickly the English coach has established Newcastle as a very effective and organised side who look to have the ability to hold their own at Premier League level. This led to the decision to extend Howe’s contract prior to the start of the 2022/23 Premier League season.

Now, the club are looking to stretch their position with the addition of a true top-level striker and in Isak they may have identified the perfect striker for what they are looking to do as a team, Isak is a modern forward who has the capacity to hold the line and play as a lone striker or to play and interact with teammates as they play through and into the final third. He has the physical stature to succeed in the Premier League but this is coupled with an excellent technical base which makes him a considerable threat with the ball at his feet.

What does the data tell us about Alexander Isak? 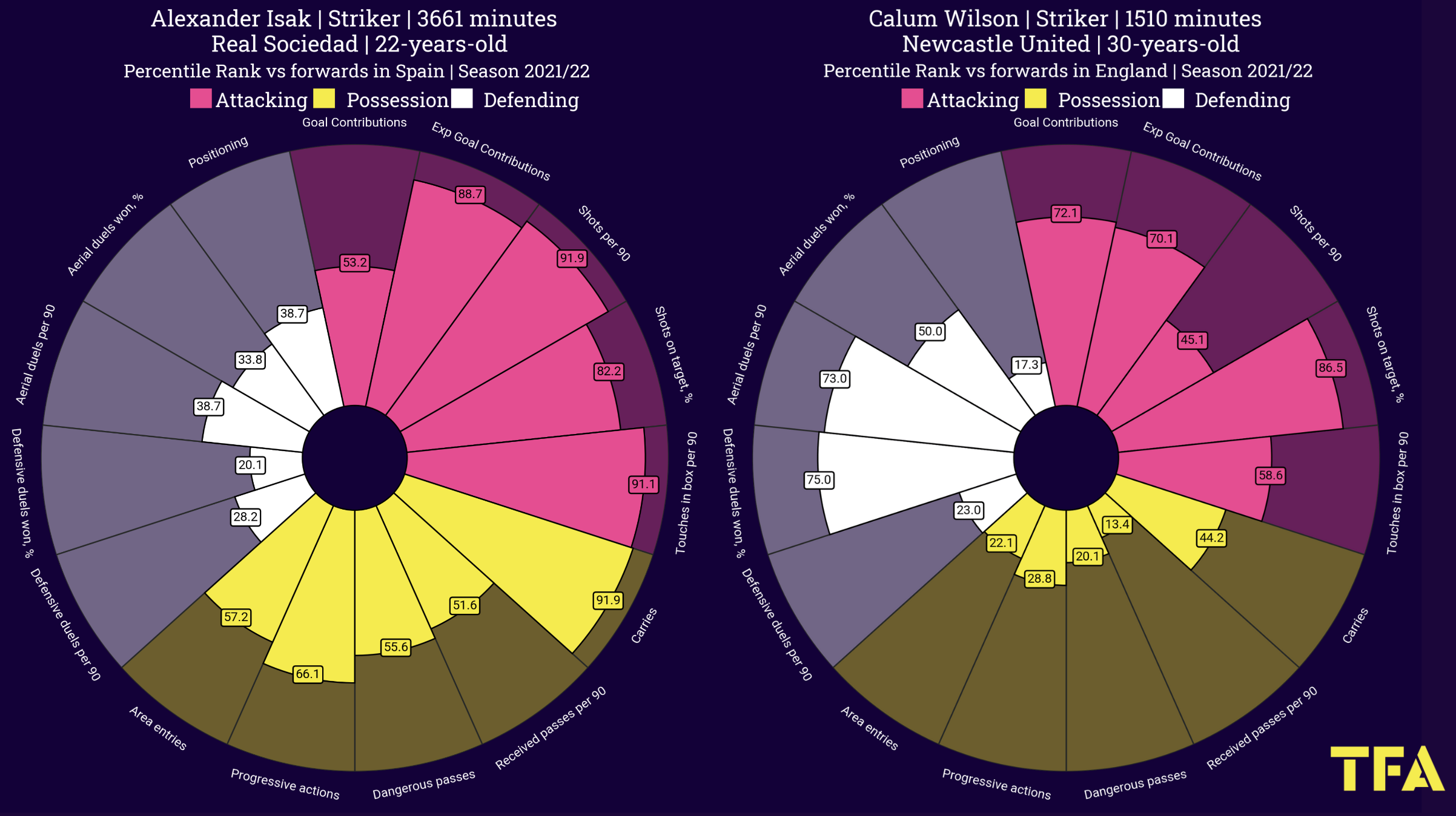 First of all we can use data to assess Isak compared to the regular first choice striker at Newcastle, Calum Wilson. All data at this point is from the 2021/22 season. The data is taken from Wyscout and converted into percentile rankings, which are based on all strikers in their respective leagues, before then being visualised using pizza charts.

When we use data in this manner we can very quickly get an idea of the individual players strenghts and weaknesses compared to another.

It is also worth noting at this point, as it will be important later in the article, that Isak has the edge over Wilscon in all areas of passing and ball progression (the yellow section). While Wilson would profile for the main part as a true ‘9’ in that he is at his best when attacking goal we can see that from the data Isak is a more well rounded attacking player.

Under Eddie Howe we have seen Newcastle United line up almost exlusively in a 4-3-3 system with a single fixed striker. Wilson, who we have already profiled using data as a true ‘9’, is the kind of striker who wants to play on the shoulder of the defender. He is at his best when he is looking to make runs from the blind side of the centre back across the face of the defence in order to get on the end of crosses or through balls. The reality is, however, that this profile relies on chance creation and ball dominance from teammates, see Erling Haaland at Manchester City for example, and that is not where Newcastle are at the moment. Instead, they have to be more of a transition based team as they look to attack quickly from back to front when they regain the ball.

This means that the central striker has to have the capacity to receive the ball with their back to goal before linking the play and then making movements into advanced areas. The striker is one of the key positions in a transition-based system because they have to be able to receive the ball deep but also to move high to play hard against the opposition central defender and to maintain the threat to run in behind the defensive line. 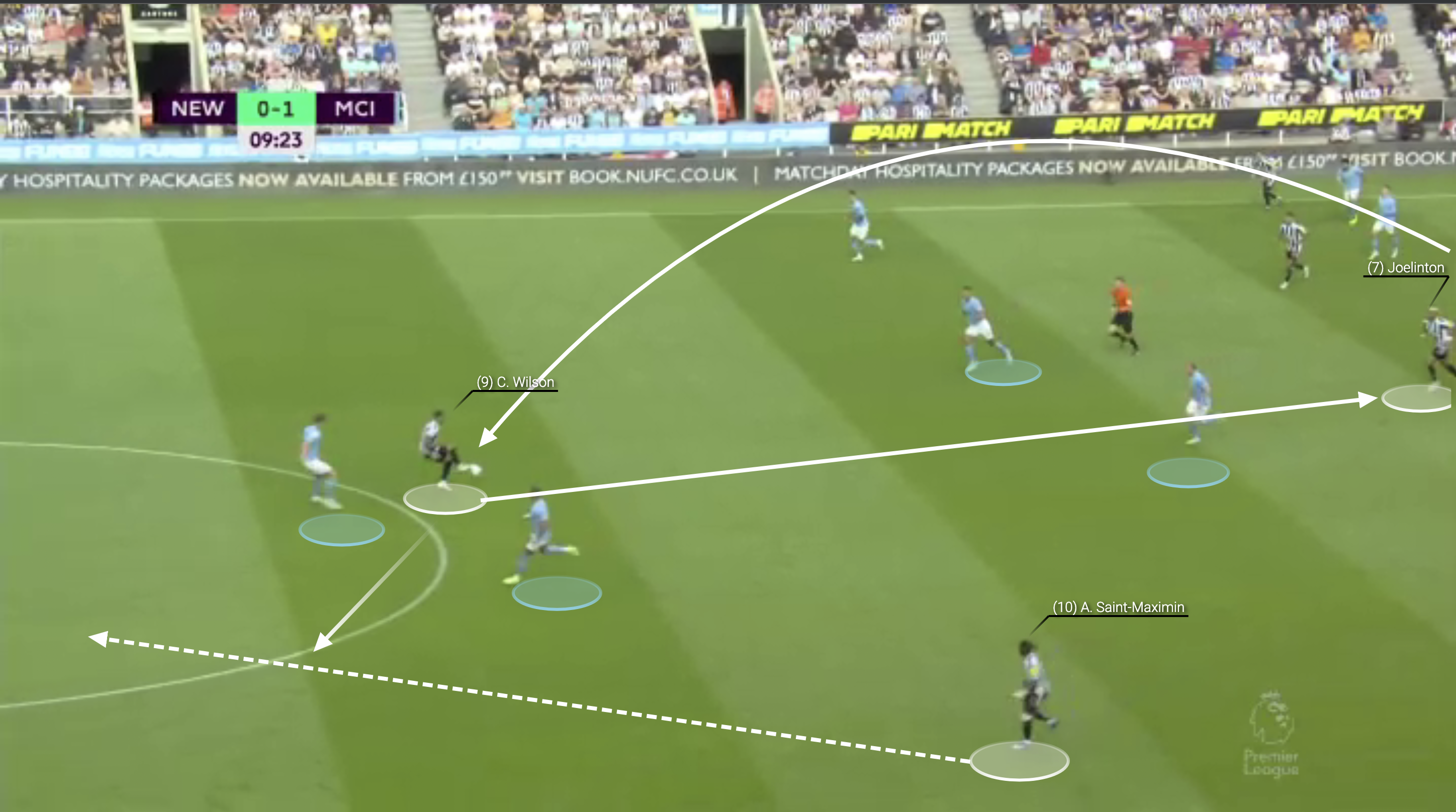 Wilson does have the ability to play in this manner but he tends to think and play in straight lines instead of with flexibility and nuance. Take this example from the recent 3-3 draw between Newcastle and Manchester City. When you are playing against Pep Guardiola’s side you have to be effective in transition because you know that City will dominate possession of the ball. This takes an element of bravery from your players who receive the ball in these transitions.

In this example Wilson receives a longer pass with his back to goal and with pressure behind his touch is safe and secure. He holds the ball and takes the safe option with a shorter pass back the way he is facing into the Brazilian midfielder Joelinton. Look at the run from Allan Saint-Maximin on the near side though. Could Wilson have been braver in holding the ball and then playing on the half-turn and putting Saint-Maximin through the defensive line? 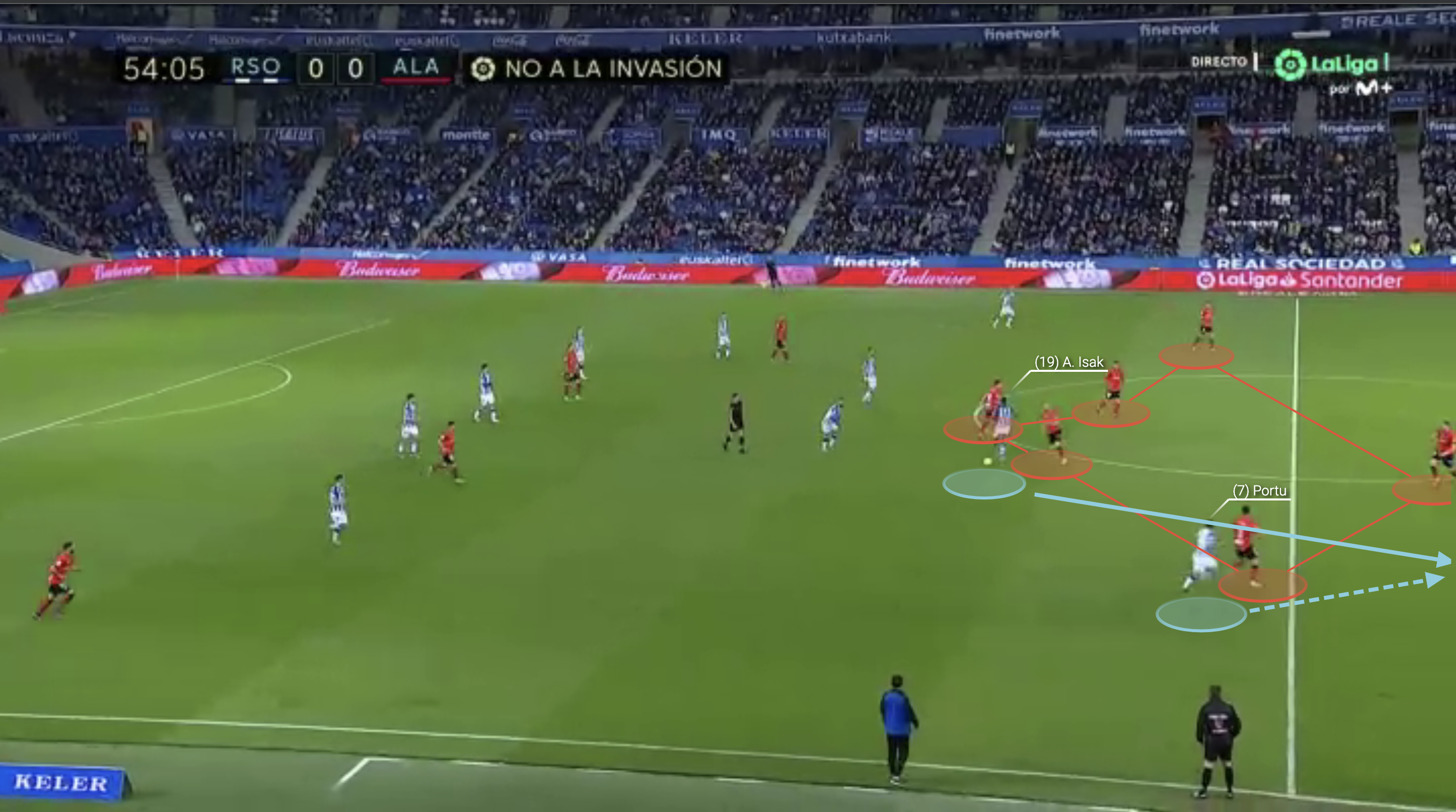 Isak is a powerful forward player who is extremely press resistant. He is capable of receiveing the ball but they delaying his next action and allowing the play to develop around him before he makes his next choice. Take the above as an example from the match between Real Sociedad and Alaves. Isak has received the ball on the highest line and as you can see he has immediate pressure put on him and the ball.

Instead, of just dropping the ball off, however, Isak stays on the ball and carries across the face of the defence. This allows the run on the near side to be made and then the Swedish forward is able to slip the pass through the defensive line to release the ball. 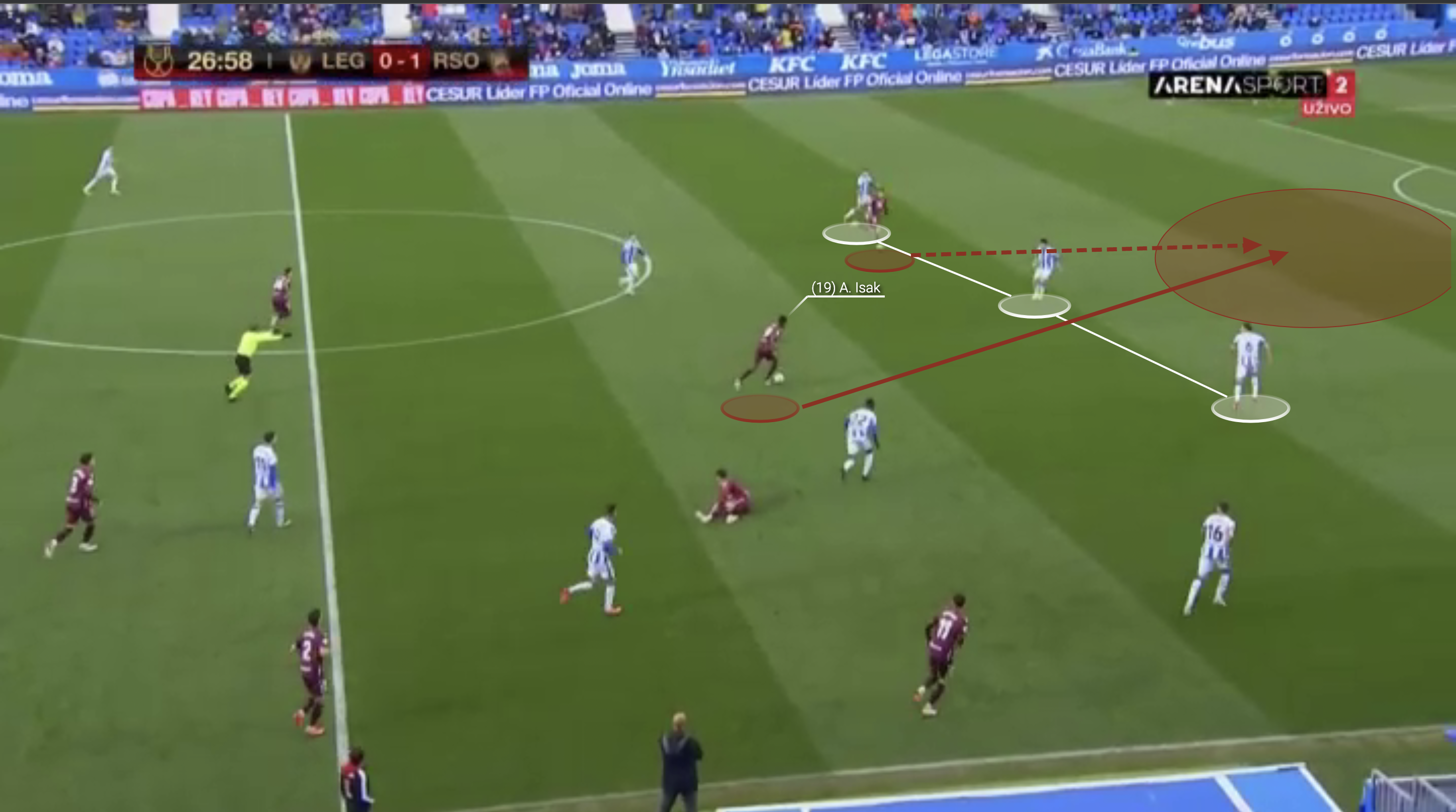 Here’s another example, this time from the match between Leganes and Real Sociedad. This time Isak is in possession of the ball in more space and facing the opposition goal. He is not a striker who is only comfortable playing on the highest line and looking to make aggressive runs behind the defensive line. He is also capable of dropping to the ball and into the half-spaces in order to receive the ball and drag defenders out of position. We see in this example that he is a threat when carrying the ball centrally.

The key thing is though that he understands when to release the ball to break a line and put his wide forwards through on goal. This creative aspect of his game will be a huge threat for Newcastle with the pace and direct nature of Saint-Maximin from the left.

Movement in the area

For all that in the modern game the striker has to have some capacity in terms of receiving and linking the play the bread and butter of the position still comes in the penalty area. Calum Wilson is a good penalty area striker at the Premier League level. He has consistently scored goals wherever he has played despite playing for teams who would generally have less of the ball and create fewer opportunities. He is a quick and dynamic striker who thrives on making dynamic movements and the right time to meet the ball before the defender can react. Alexander Isak is a slightly different forward in the area. He is less dynamic and explosive but his positioning, anticipation and awareness still mean that he arrives in the right area to get on the end of chances. 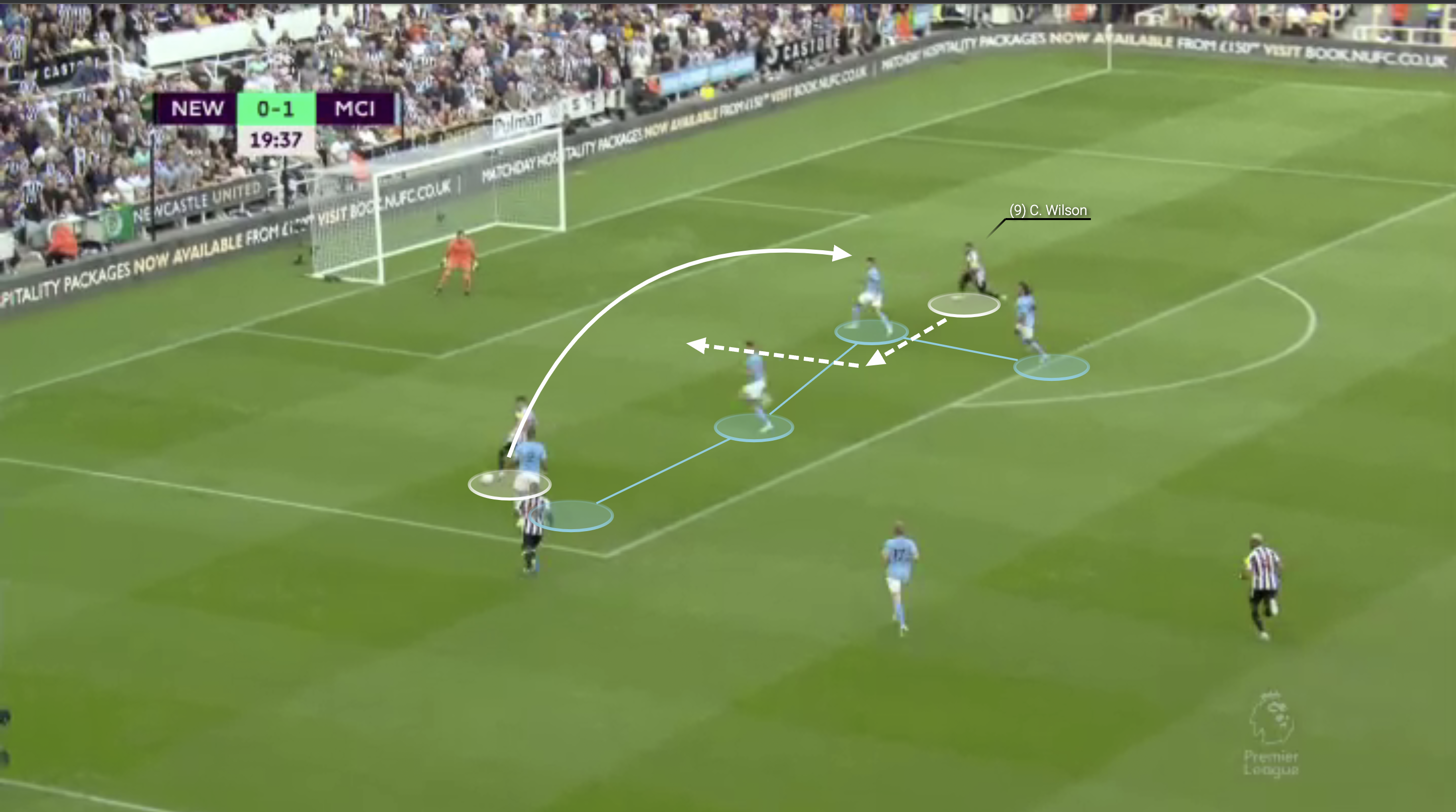 These are the situations in which the role of the striker really comes to the fore. As Newcastle break into the Manchester City penalty area on the near side here the defenders are quickly recovering their position to react to the threat. In these situations the attacking team needs two things, they need quality in terms of the ball and the decision making from the player in possession but they also need timing from the forward.

These are the areas in which Wilson is very strong. He times his movements well to get across the front of the last defender to attack the cross. In this instance, the pass and run do not quite match up but the intent is there. 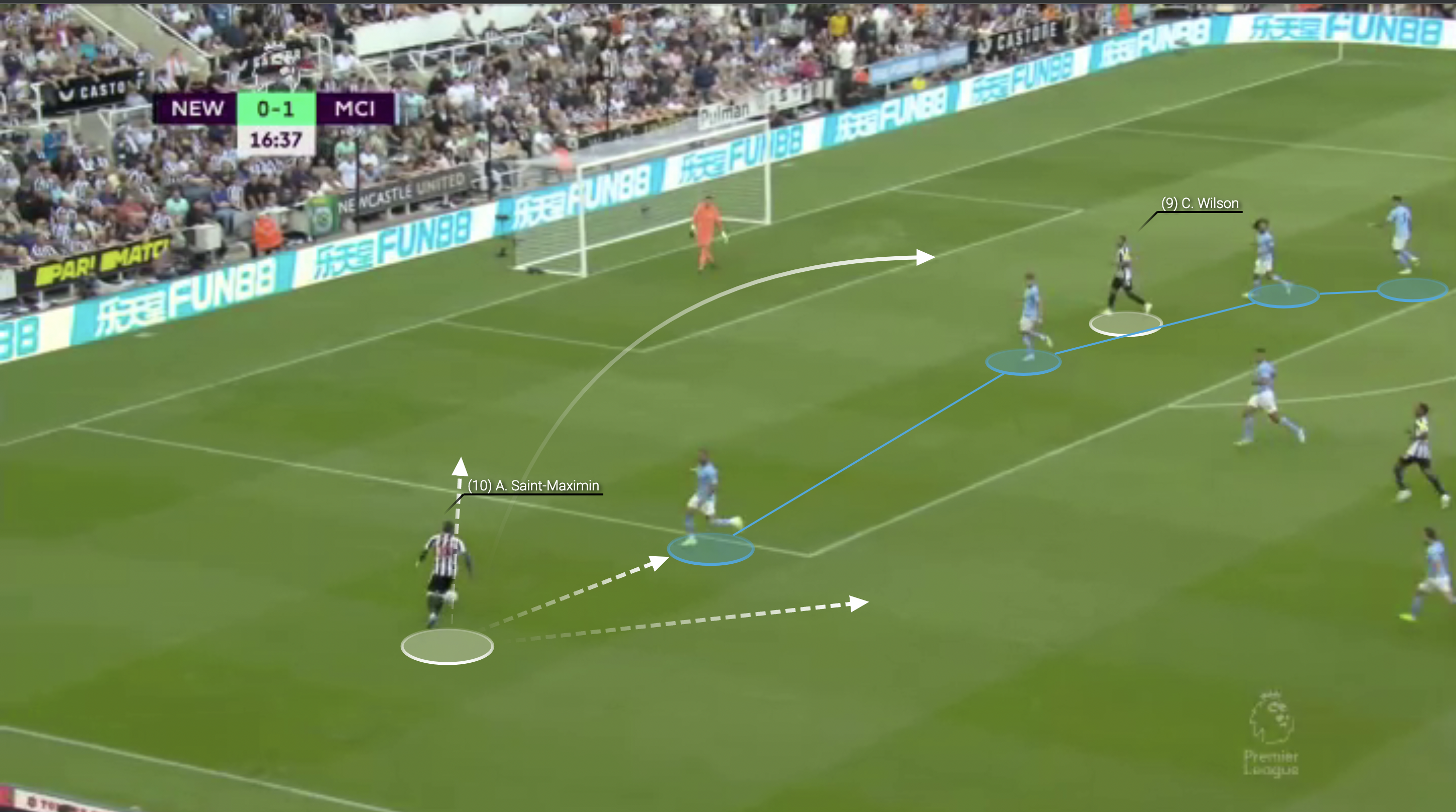 In the French winger Saint-Maximin, we see that Newcastle have one of the most dynamic, unpredictable and fun wide forwards in the top-5 leagues. He is aggressive in his approach to engaging opposition defenders and his final ball can at times come at times that the striker does not expect.

Here we have an example of the positions in which the French winger is at his most unpredictable. He is a threat here to go on the outside or the inside of the defender but he might also dribble directly at the defender to pin the player and outplay them 1v1. He can also, however, hit the early cross. This makes him difficult for the striker to read.

This is where we believe that Isak has a clear advantage over Wilson. While Wilson wants to be dynamic with his runs this is less effective when the ball does not come. Isak will instead look to isolate and attack s specific zone within the penalty area. 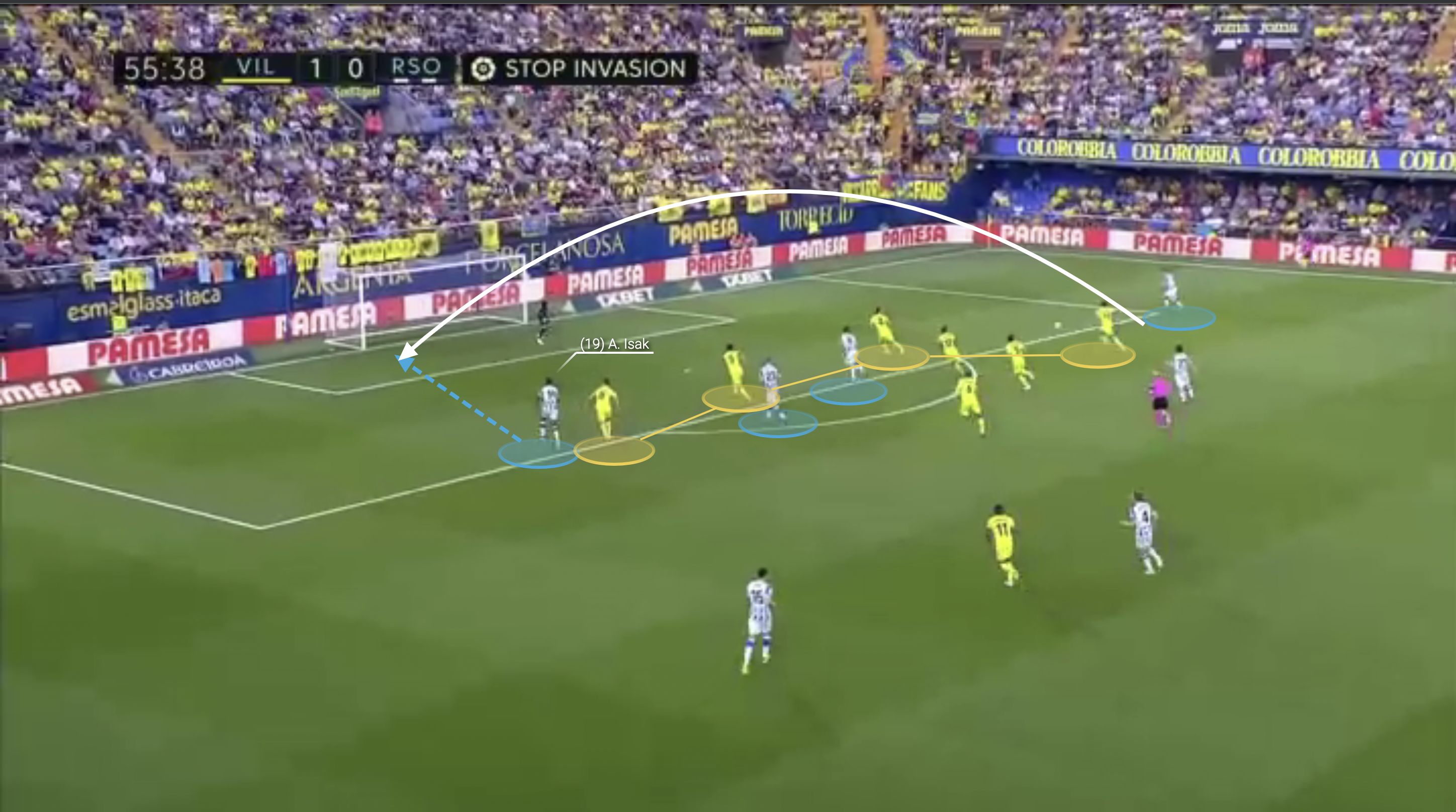 Take this as an example of what we mean.

In the match between Villarreal and Real Sociedad, we see Isak positioned at the far side of the area away from the ball. Villarreal are actually in a good position defensively although they are being forced to defend back towards their own goal. Instead of trying to force things with an aggressive run across the face we see Isak read the space and attack the far post while the defenders try to cut out the threat at the near post and centrally.

As the cross comes in Isak has seemingly just drifted into the right area and he scores with a tap in.

Strikers who are positionally intelligent, as Isak is, often appear to be ‘in the right place’  but make no mistake about it there is a real skill in that.

Whenever a club receives significant investment in the manner that Newcastle United have the first sign that things are progressing tends to be when the first team squad starts to look like it has real depth. This is the case now with the signing of Alexander Isak. He represents a better-rounded and more modern striker than Calum Wilson but the 30-year-old English striker will provide real quality and a genuine threat from the bench for Eddie Howe’s side.

The signing of Isak represents a real statement of intent from Newcastle and their recruitment team.