Hans Vanaken at West Ham United 2022/23: On the verge of his big move to the Premier League – scout report

After a spectacular seven seasons with Club Brugge, Belgian international midfielder Hans Vanaken is rumored to be close to finally getting his big move at the age of 30. English Premier League side West Ham United are the interested party, with an apparent first bid of €10 million rejected by the Belgian champions. This however, has not deterred the east London club, with a rumored second bid coming shortly.

This scout report and tactical analysis piece will take a look at some of the strengths that Hans Vanaken possesses, and analyse why the five-time Belgian First Division A champion would be a tremendous fit for West Ham’s midfield, and squad as a whole. 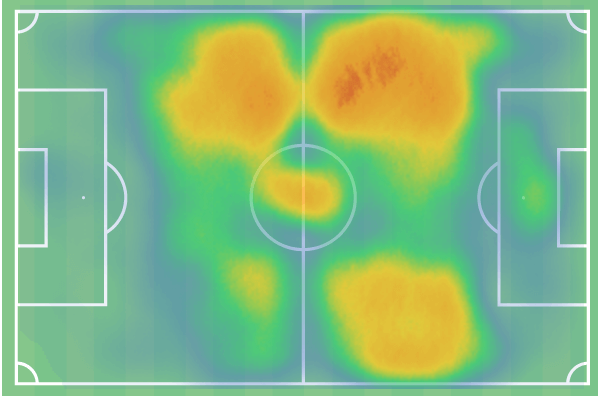 The image above shows Hans Vanaken’s heat map from the 2021/22 season. Last season under current Ajax boss Alfred Schreuder, Club Brugge were usually lined up in a 3-5-2 formation, with Vanaken playing as one of the central midfielders. While he spends most of his time on the left half of the pitch, the Belgian international sometimes will drift into a wider right position, depending on who his midfield partner was for the match.

When watching Hans Vanaken play, as well as looking at the underlying statistical numbers, it is hard to look past the range of passing that the Belgian international midfielder possesses. In all competitions last season, Vanaken averaged 56.23 passes per 90 minutes, with an unbelievable completion percentage of 88.5%. These are not just backwards or sideways passes either, the Belgian averaged 17.21 forward passes per 90, completing 81.6% of them. Following are a few examples of the passing range that Hans Vanaken possesses. 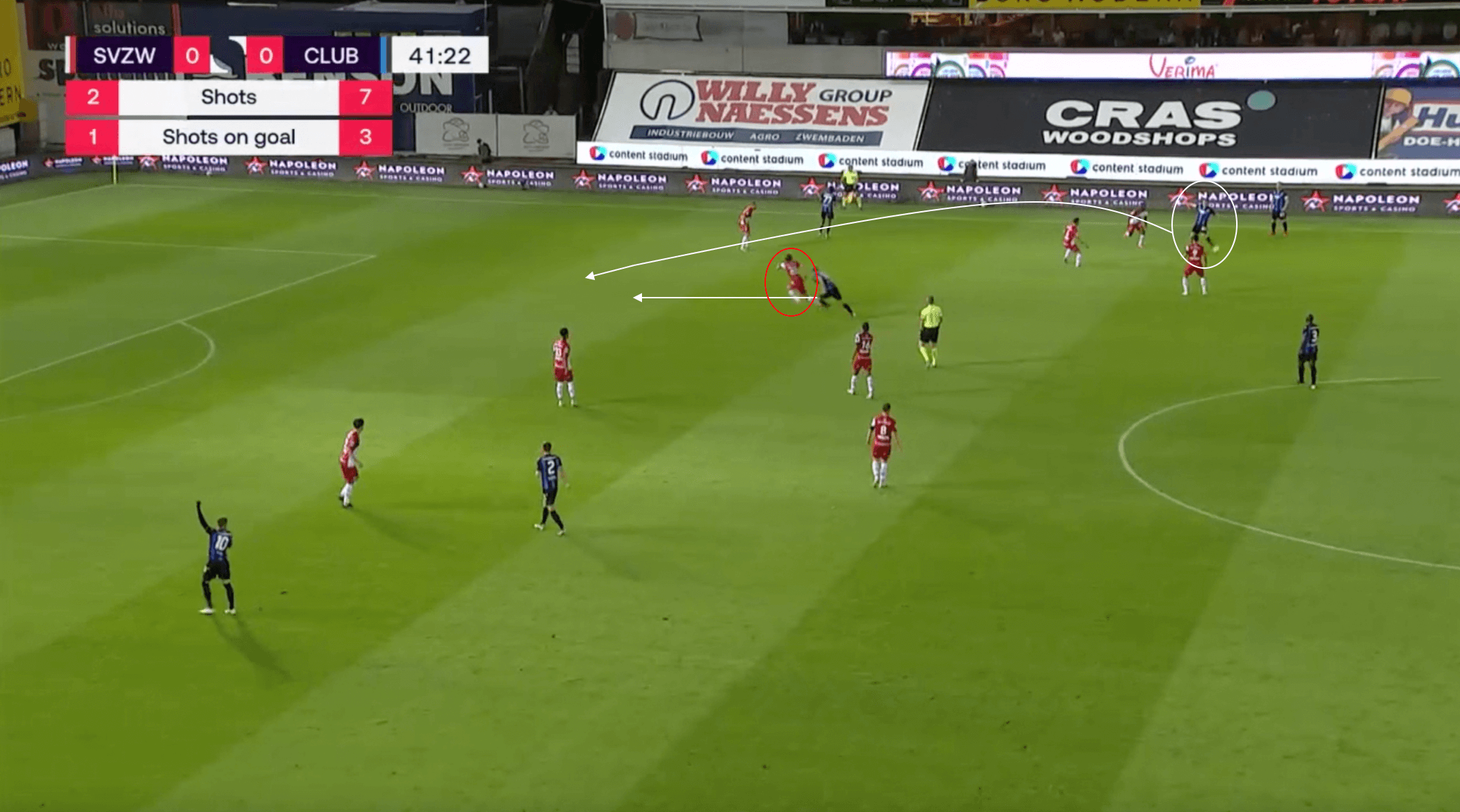 An example of Hans Vanaken’s range of passing as well as vision is shown in the image above. The midfielder has drifted out to the far touchline in order to get on the ball. After receiving possession, he is able to quickly look up and spot the opposition central defender out of position. New AC Milan player Charles de Ketelaere is able to spot the space and make a run into it, with Vanaken playing a perfect ball over the top into the young forward’s run. The midfielder ends up getting credited with a second assist, as the ensuing ball across the box by de Ketelaere is put into the back of the net by Club Brugge. 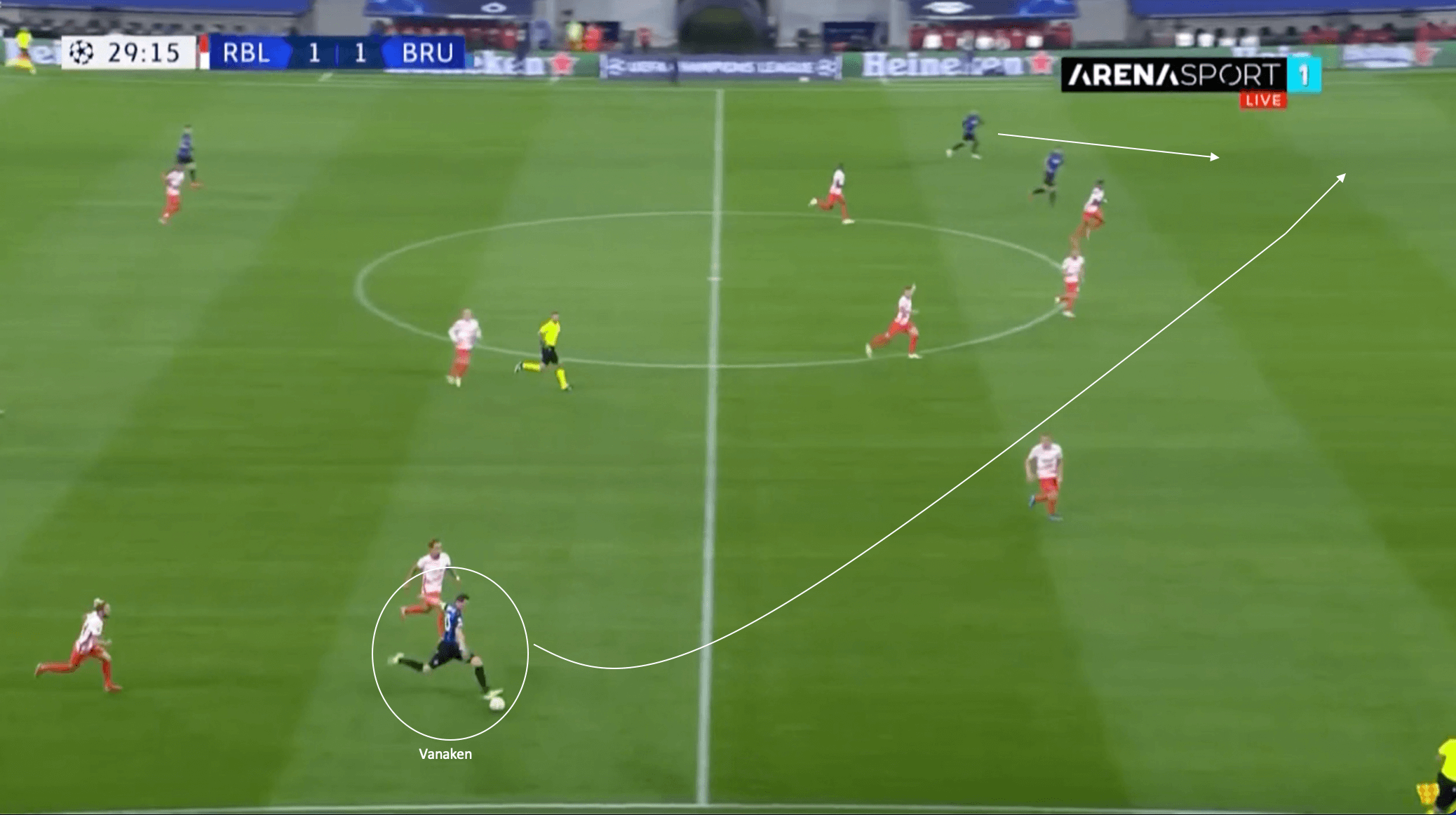 The example above shows an instance of Hans Vanaken using his range of passing to catch an opposition’s high defensive line out. With the defensive line of RB Leipzig out of position near the halfway line, Vanaken is able to spot his opportunity to exploit the space in behind the defence, with the Leipzig wingback caught out in an advanced position. With Club Brugge holding a 2v1 numerical advantage on the far side of the pitch as a result of this, the Belgian plays an absolutely incredible cross field pass into the wide players path. This allows Club Brugge to quickly advance into the attacking third of the pitch, all from the quick thinking and spectacular passing range of the 30-year-old midfielder. 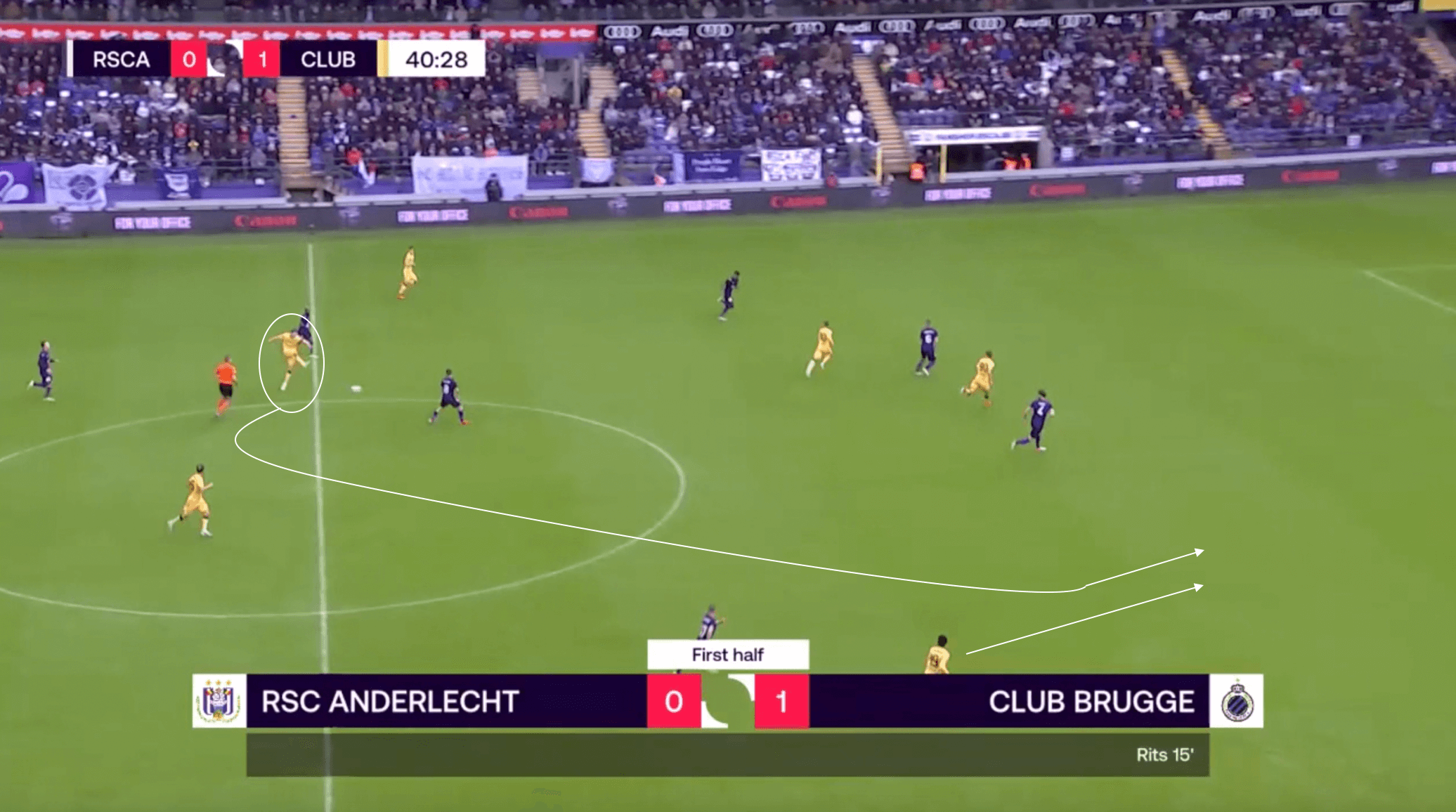 The image above shows another example of Hans Vanaken’s ability to exploit the space in behind opposition defences with his passing range when defenders are out of position. In the phase of play above, Anderlecht’s entire defence is back into position beside current Manchester City player Sergio Gomez. Vanaken notices this space in behind and plays a great ball through the midfield and in behind Anderlecht’s defence, and into the path of the Club Brugge runner making a darting run in behind the vacant space left by Gomez. Though no goal results from this passage of play, it once again starts from the ability of Hans Vanaken to progress the ball from all over the middle third of the pitch.

This section has taken a look at the passing range of Hans Vanaken, and especially his ability to break opposition lines, especially when the opposition are still trying to get into their defensive shape. This would be a particularly useful trait for David Moyes’s side, either from a #10 position, or as one of the holding midfielders alongside one of/both of Declan Rice and Tomáš Souček.

While the outstanding strength that Hans Vanaken possesses is without a doubt his passing range, especially when it comes to line-breaking passes, the midfielder is also a very capable goal scorer as well. The Belgian has a total of 344 appearances for the Bruges club, scoring 102 goals in the process. However, Vanaken is not a midfielder who just takes shots from the edge of the box and they go in, rather, he makes intelligent movements in and around the 18-yard box to find himself in dangerous positions in and around the penalty spot. This next section will take a more detailed look at Vanaken when it comes to being a goal scoring threat. 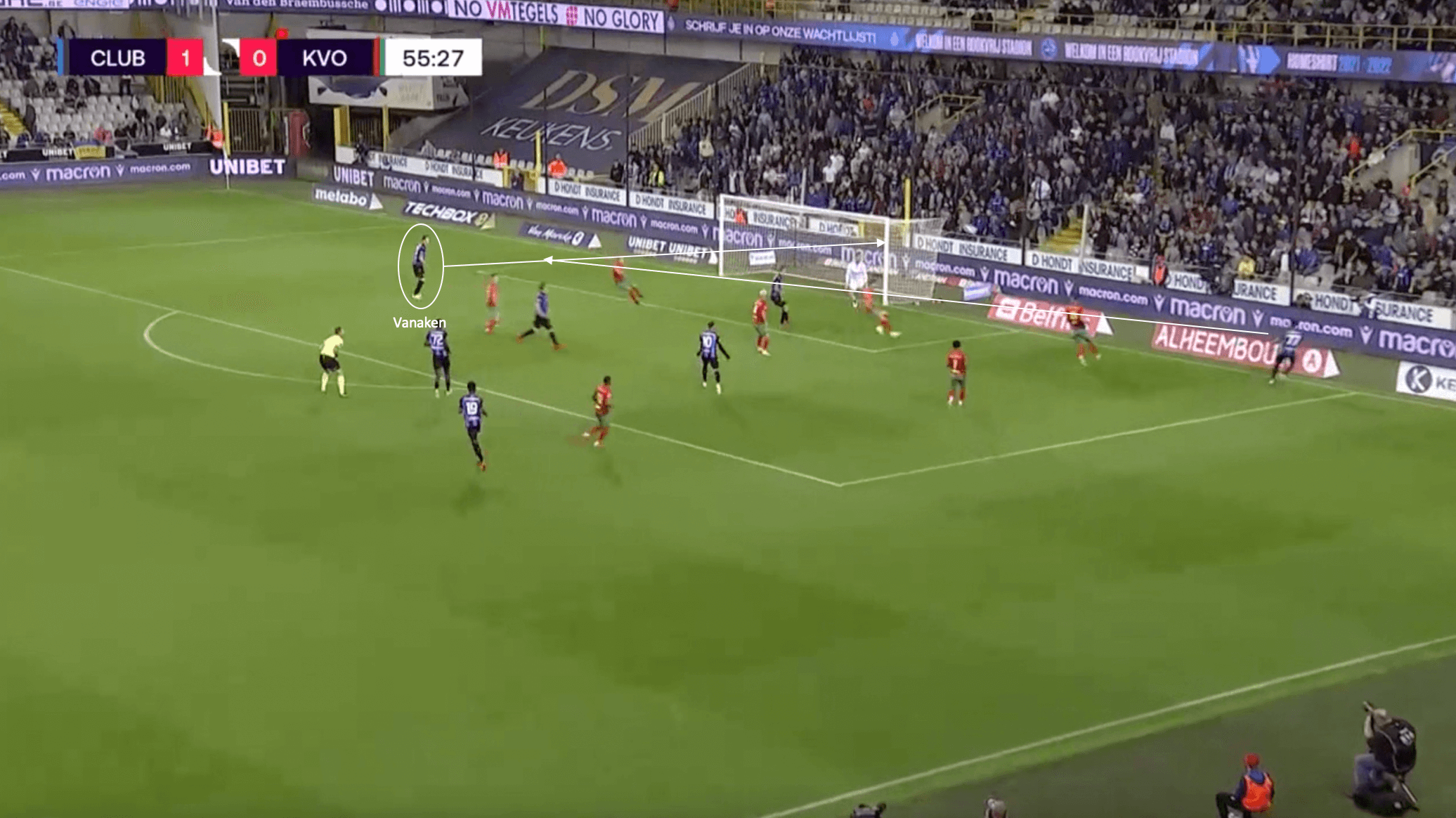 The image above shows an example of the intelligent movements that Vanaken is capable of making inside the penalty box to find himself in goal-scoring positions. As the Club Brugge drives to the endline and sends the ball into the box, the midfielder had already made a good run from midfield into the box towards the far post. The intelligent part of this run comes just before the ball is delivered, Vanaken stops where he is at. The opposition defenders continue to move towards their goal, and because the Belgian stops in his tracks, he finds himself unmarked. The ensuing ball across the box is played right to him, and he is able to volley home and score for Club Brugge.

This goal came about due to the intelligent movement of Hans Vanaken inside the penalty box, with the Belgian stopping to make space for himself as opposed to trying to continue to drive towards the far post and win a 50-50 header. 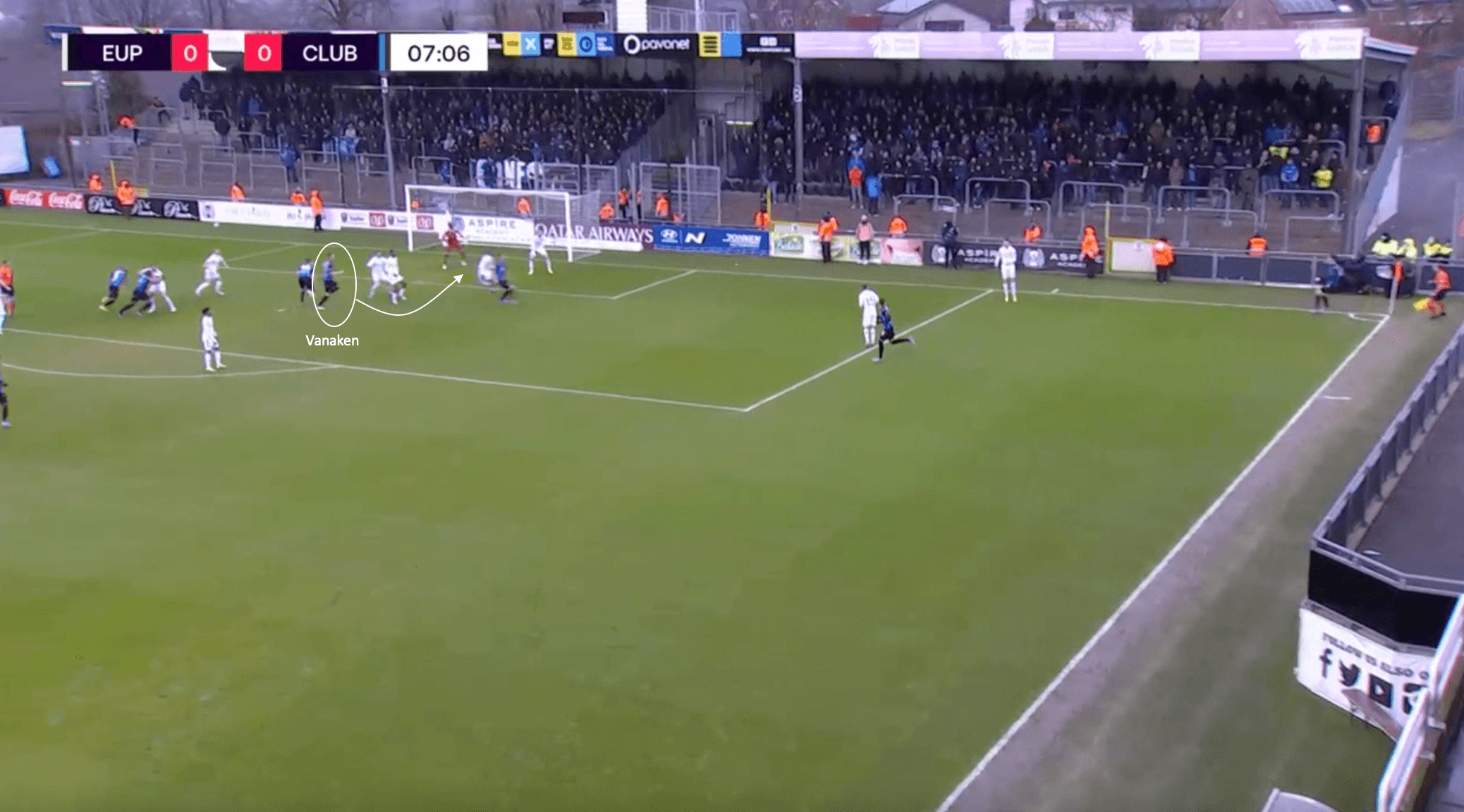 The extent to Vanaken’s goal-scoring exploits are not just from open play. The Belgian international midfielder is also dangerous from set pieces, with his aerial ability as well as intelligent movement making him a threat. The image above shows an example of what Vanaken is capable of when it comes to set piece situations. As the corner is delivered from the near side, the midfielder makes an intelligent run off the blind side of both defenders on the penalty spot, putting him in prime position to win the first ball. He succeeds at this, with his header going past the Eupen goalkeeper and into the back of the net.

At West Ham, Tomáš Souček is a huge threat for them when it comes to scoring goals and creating chances from set pieces. If Hans Vanaken were to come into the football club, it would allow the east Londoners to have another dangerous set piece threat, as well as give the Hammers another midfielder who could make late dangerous runs into the penalty box to create goal scoring opportunities.

Along with being a good attacking midfielder, Vanaken also is defensively astute, which illustrates why the Belgian excels at playing as a #8, or box-to-box midfielder. In all competitions for Club Brugge last season, the Belgian midfielder averaged 4.29 defensive duels per 90, winning 66.2% of these defensive battles. Vanaken also is selective when it comes to engaging in defensive duels, and is not rash in his defensive decision making. The Club Brugge midfielder averaged only 0.45 fouls per 90 minutes this season, only committing 22 total in over 4,400 minutes of action in all competitions for the Belgian champions. This, as a result, means he is rarely booked, with only two yellow cards all of last season. 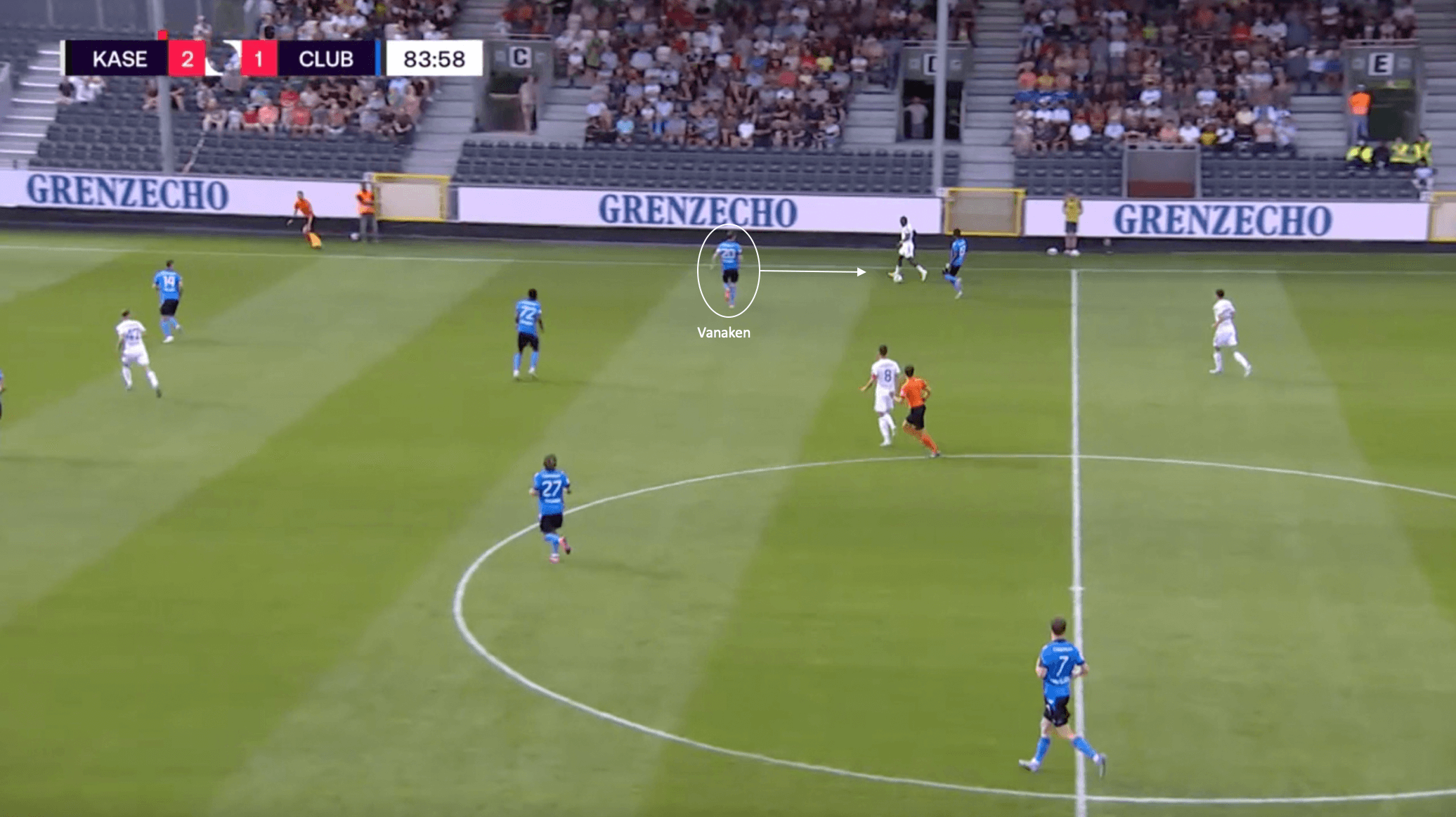 The image above shows the range that Hans Vanaken will cover in order to get involved and help out in the defensive phase of play. The midfielder has moved over to the far touchline from his central midfield position in order to get involved in helping to stop Eupen’s attacking sequence. Vanaken is able to get over and close down the attacker, getting in the passing lane, and block the pass intended for the forward running in behind Club Brugge’s defence. Though not a true defensive duel, this example is still able to illustrate the defensive commitment and work rate that Hans Vanaken possesses, one that makes him a good box to box midfielder. 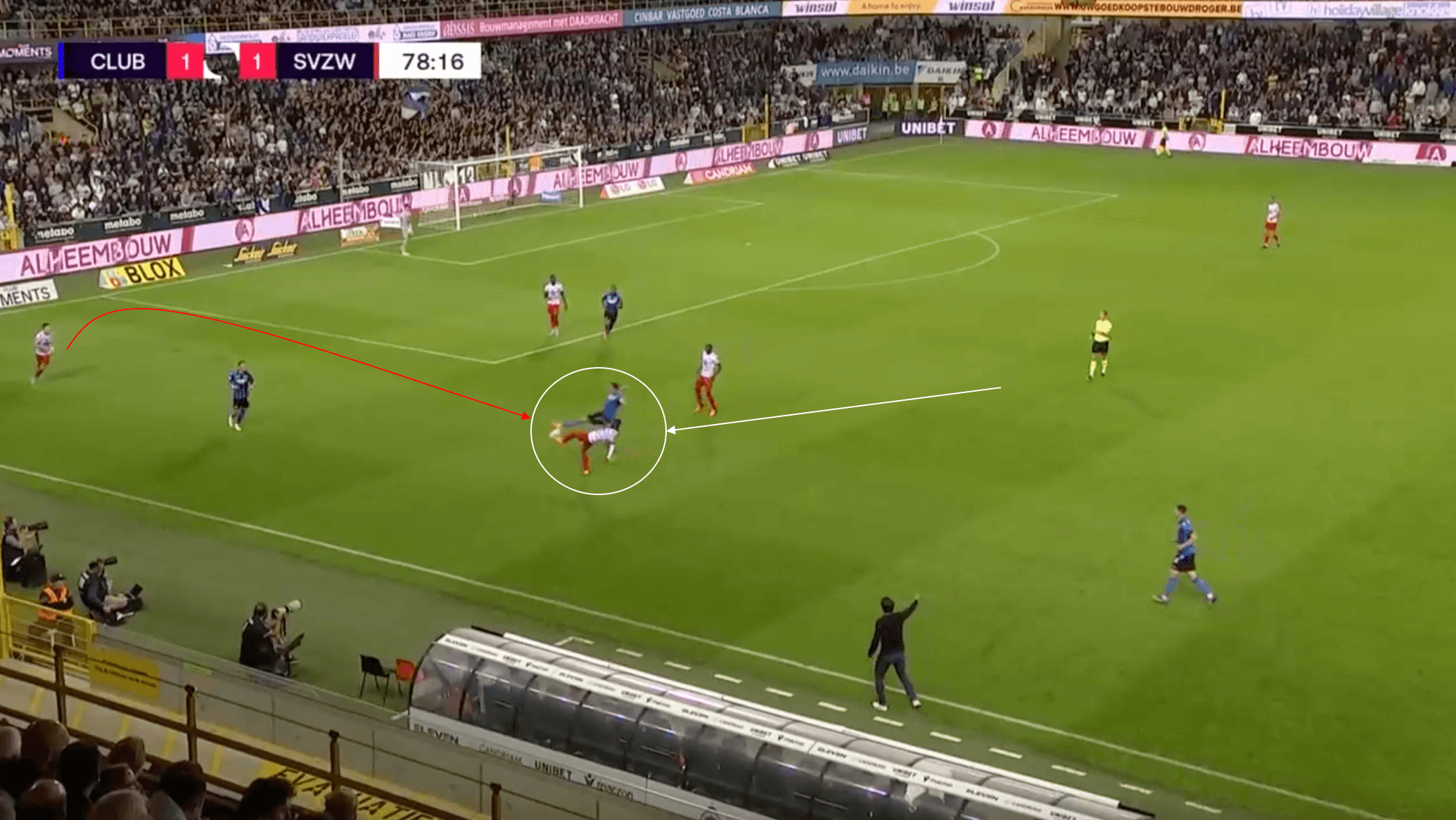 The image above shows another good example of the quality of Hans Vanaken when it comes to defensive duels. In this phase of play above, Club Brugge are in a pressing moment, with the opposition looking to try and play out from the back. As the forwards put pressure on the defender in possession, Vanaken moves from his deeper midfield position to close down the player on the near touchline. As a result, Vanaken is able to win the ball in a 50-50 duel with the opposition attacker, with the ball falling to a Club Brugge attacker. As a result, this allows the Belgian champions to start a quick counterattack, all because of the awareness and quality of Vanaken in these types of defensive moments. 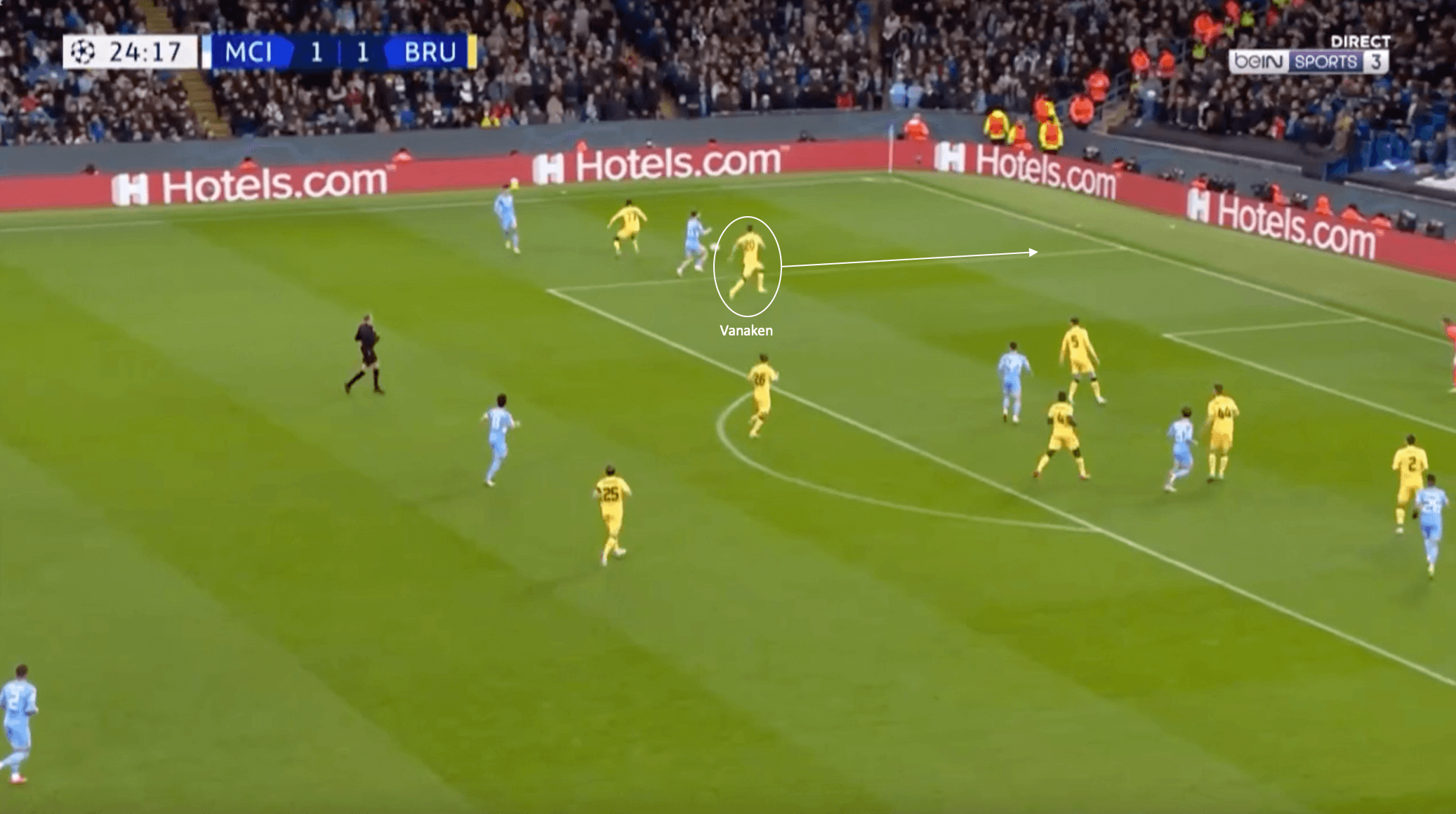 It’s also in and around the penalty box where Hans Vanaken is able to excel with his defensive qualities. This Champions League match against Manchester City shows a great example of this. With City having the ball out on the wing, Vanaken notices the underlapping run that Phil Foden is attempting to make towards the edge of the penalty spot. Though the Belgian midfielder is not the quickest, he is able to recognise this and cut off Foden’s angle. This allows him to shield the ball and stop the attacker’s run, and allows Club Brugge to reset with a goal kick.

As this section has shown, while Hans Vanaken is primarily a more attack minded midfielder, he has the defensive qualities to help out his side going back as well. This will be beneficial for David Moyes’s side, as they have not had the best start to this Premier League season.

As this scout report and analysis piece has shown, if Hans Vanaken were to be signed by West Ham United before this transfer window shuts, it would be an astute piece of business for David Moyes’s side. The Belgian midfielder should slot right into the West Ham side, and would be a near perfect fit for the tactics that the Scotsman utilises at the west London side. Finally, at the age of 30, Hans Vanaken looks set to get the big move that he has worked hard for in recent seasons.