In recent years the word ‘playmaker’ has become more of a descriptive label than a clearly definable role. Playmakers have featured in various positions, ranging from the traditional number 10 position in the hole behind the striker to much more deep-lying positions where they often act as single pivots in three-man midfields.

What all playmakers seem to have in common though is an exceptional passing ability, whether that means playing defence-splitting hollywood passes or reliably and efficiently recycling possession for teammates, even when under pressure. Sporting’s Bruno Fernandes is better known for the former.

Something of a late bloomer at 24 years of age, Fernandes seems to finally be fulfilling, and indeed exceeding, the potential Sporting saw in him to pay Sampdoria €8.5 million for his services in the summer of 2017.

The Portuguese midfielder has taken the Primeira Liga by the scruff of the neck this season, excelling at not just creating chances for teammates, but scoring goals as well.

In his four seasons in Italy he was never more than an occasional goalscorer. His biggest tally was the five goals he managed for Sampdoria in 2016/17, his final season in Serie A before returning to his native Portugal with Sporting.

In his debut season in the Primeira Liga he notched an impressive 16 goals in all competitions, but it is his goalscoring form in 2018/19 that has caught the attention from a whole host of European clubs.

So far this campaign he has registered a remarkable 28 goals, which is all the more impressive when you consider that his nominal position is on the right-hand side of Marcel Keizer’s three-man midfield. It is also a record goal tally for a midfield player, with the Sporting captain having now overtaken Frank Lampard who previously held the record with 27 goals in a single season. 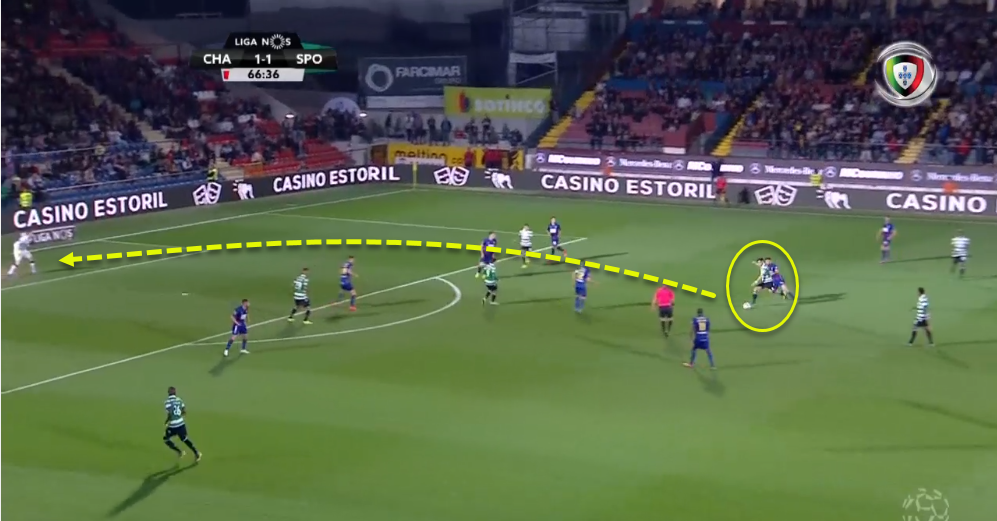 As can be seen in the image above, Fernandes is not afraid to shoot from distance; his average of 2.3 shots outside the box per game is the highest in the Primeira Liga. Even with plenty of space to run into, he gets a lot of power into his shots with just a short run up. Here even from such a long distance he managed to force the Chaves goalkeeper into a save at his near post. It is this boldness in shooting from range after just one touch that often catches defenders and goalkeepers off guard.

But the ex-Udinese man does not owe his goal tally just to trying his luck from distance. In fact, only three of his 16 league goals have come from outside the box. He makes the most of his obvious technical ability by making well-timed runs into the box. In the image below he lurks outside the area, patiently watching how the attack develops. He avoids the temptation to make a run into the space in front of him that would attract the attention of the opposition defenders. 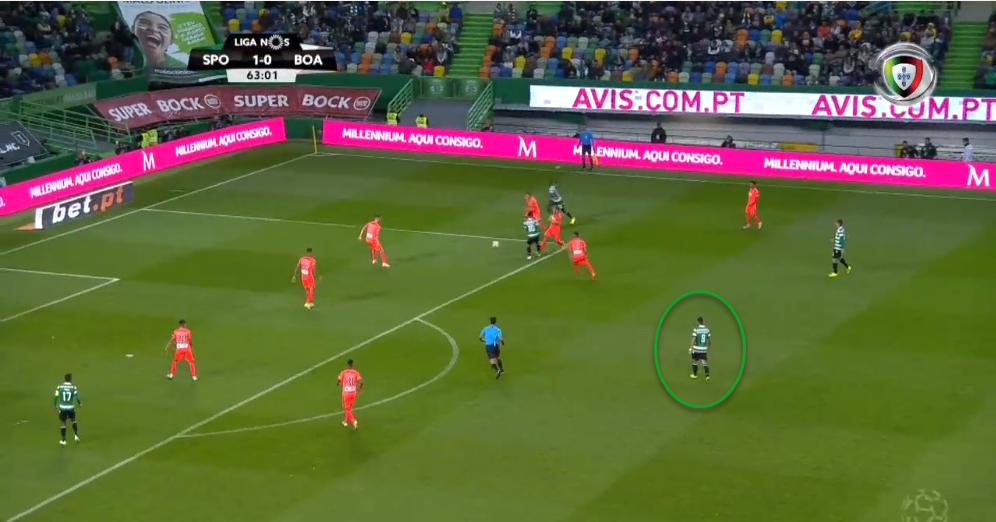 Then just as the ball is cut back towards him, he sprints into the space and scores with a powerful right-footed shot into the top left-hand corner. 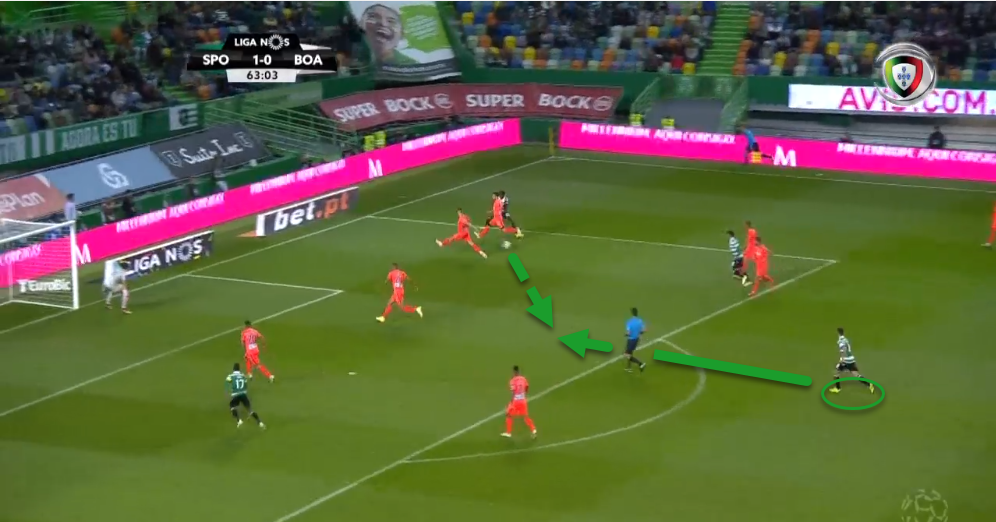 Intelligence off the ball

There is of course a lot more to Bruno Fernandes’ game than just goals. In order to provide a tactical analysis of the player it is necessary to delve into his other less tangible skills. His technical ability is obvious but what makes the Portuguese international so difficult to defend against is his movement off the ball.

Despite mostly being used on the right-hand side of a three-man midfield, he appears to have been given licence to roam the pitch searching for opportunities where he can influence the game.

Fernandes is happy to come deep to collect the ball and influence the game from further back. Sporting often need this from their playmaker when playing against teams that sit deep in a compact unit, a common occurrence in a league with an evident gap in quality between the big three or four teams and the rest.

In the image below from an away game against Marítimo, Fernandes manages to pick out striker Bas Dost with a pass that breaks the home side’s defensive lines. 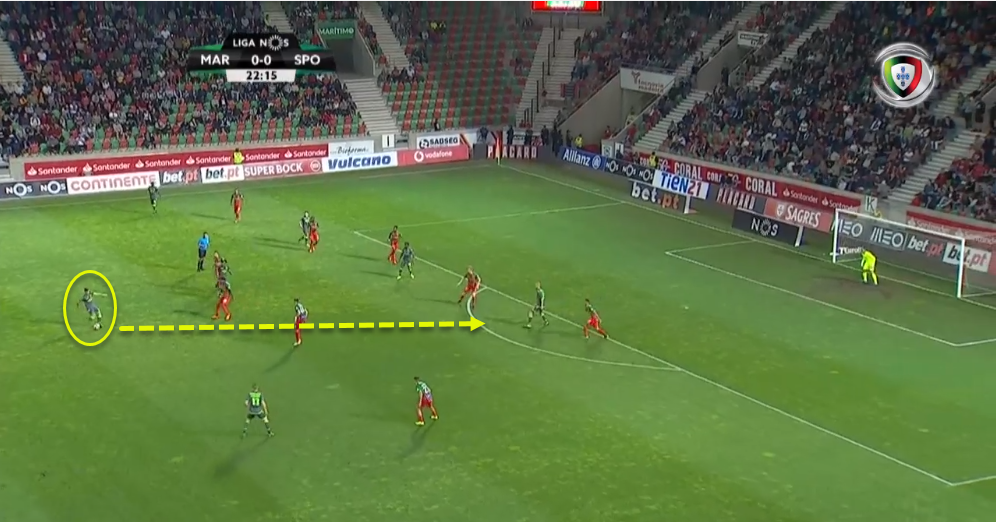 Another area where Fernandes is particularly dangerous is on the flanks, from where he has whipped in 53 accurate crosses in the Primeira Liga this season. This is a total bettered by only three other players in the Portuguese top flight, all of whom incidentally play in wide positions for their respective teams. 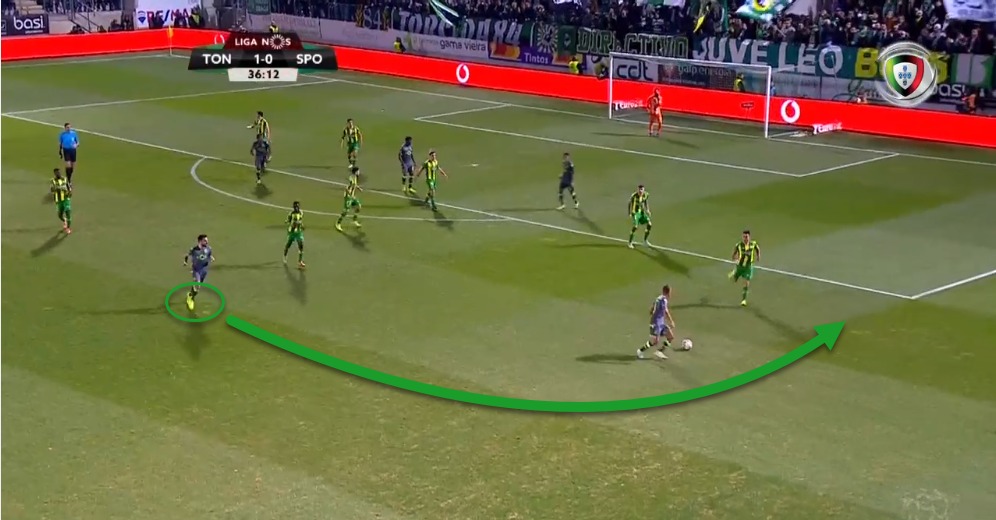 In the image above Fernandes spots the space to the right of right-back Bruno Gaspar and so makes a curved run in behind, receiving the ball from Gaspar and managing to produce a dangerous cross into the box. 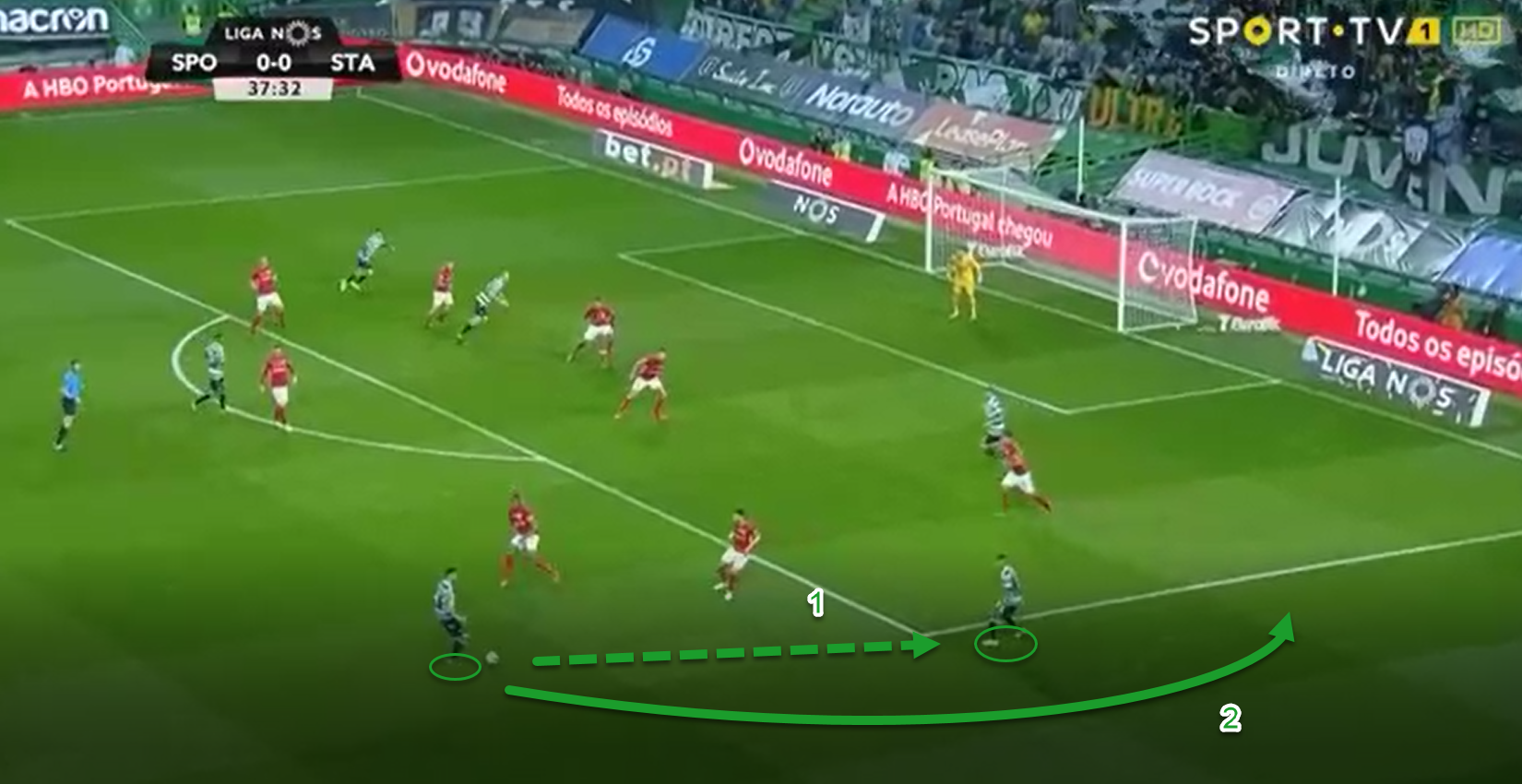 In the example above from the game against Santa Clara, Fernandes plays a pass to teammate Raphinha and immediately makes a run into the empty space to his right to provide a passing option out wide. This is a particularly common move owing to the fact that Raphinha, who plays in the wide right position, likes to cut inside onto his left foot and occupy the half-space, leaving the right wing free for the likes of Fernandes to exploit.

When Fernandes ventures over to the left-hand side, however, he helps to create overloads that can release Marcos Acuña. Sporting’s naturally left-footed winger is not far behind Fernandes when it comes to accurate crosses, with 43 to his name this season. 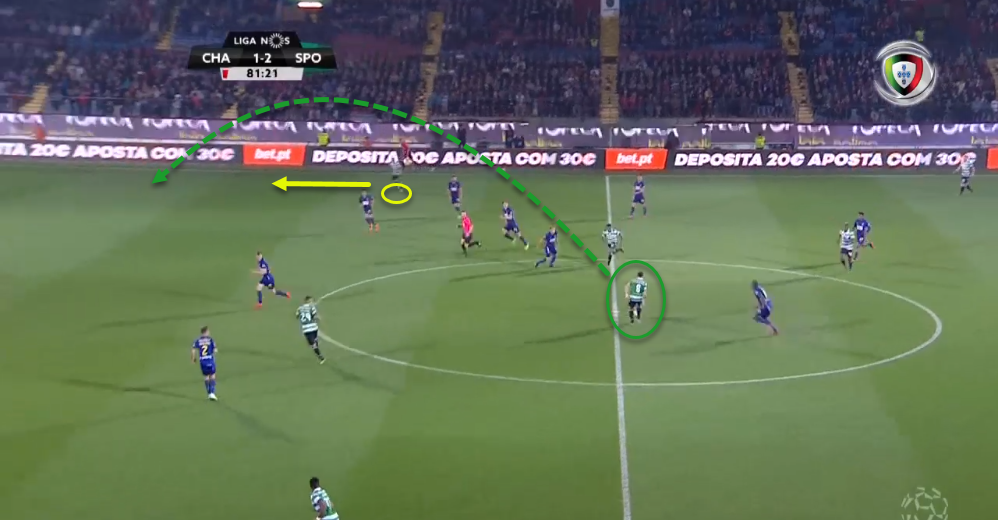 Fernandes is particularly dangerous when his team are on the break. He not only has the vision to spot teammates running into space but also the technical ability to play perfectly weighted passes for them to run onto. And this is exactly what he does in the image above, where he plays a lofted ball into the path of Raphinha, one of Sporting’s paciest players and the one Fernandes usually looks to in these situations. 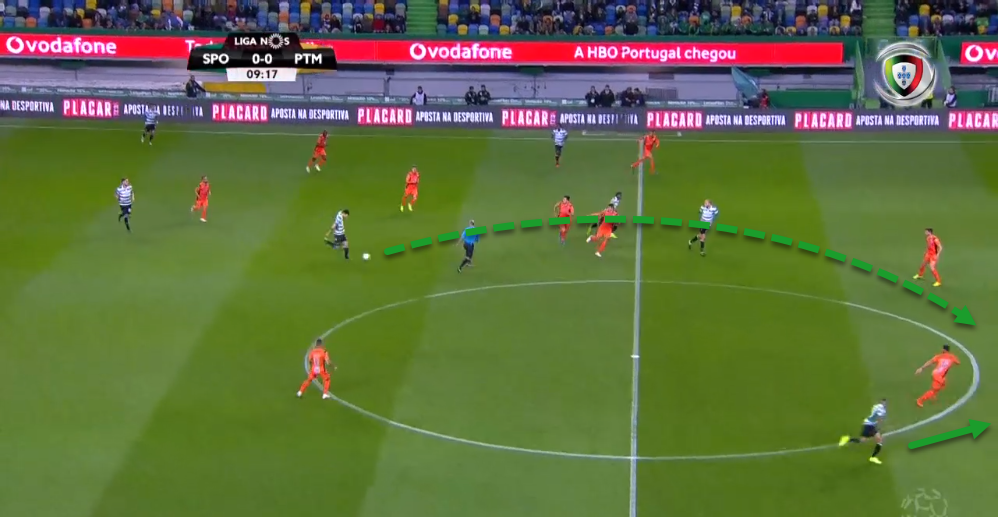 In this image he plays in Raphinha once more, this time against Portimonense, characteristically striking the ball with the outside of his right foot.

Any side with pacey forward players would benefit from a player like Fernandes, who can be seen in the image below setting up young winger Jovane Cabral with a pinpoint through-ball in anticipation of his run. 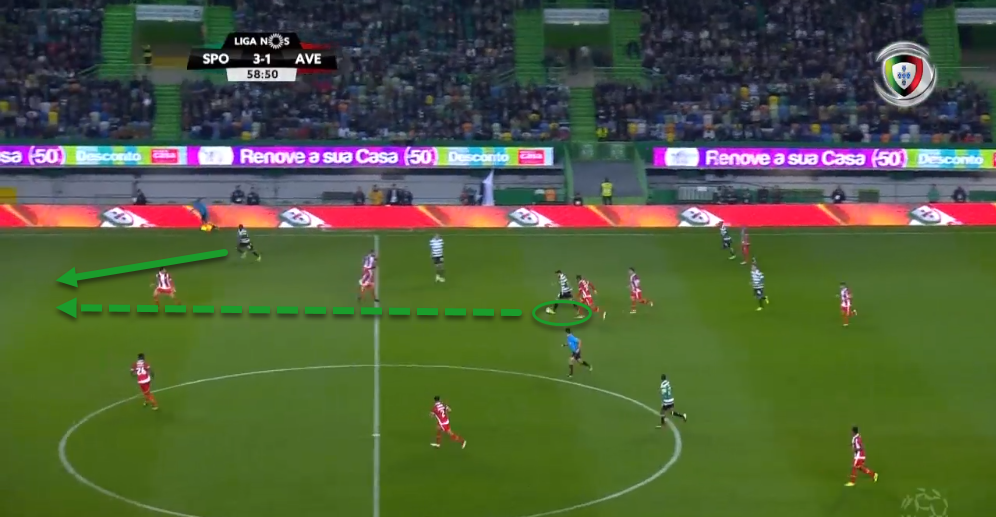 Always looking to pick out teammates in goalscoring positions, Fernandes has racked up 11 league assists this season, the second highest in the division and significantly more than the second-highest ranked Sporting player, Marcos Acuña, with six.

Standing at 5’10”, Fernandes cannot rely on having a low centre of gravity to simply drop a shoulder and wriggle away from defenders. Instead, he indulges crowds with cute Cruyff-turns and nutmegs to escape from his opponents. It is this ounce of flair, evident in the way he strikes the ball and when he plays those nonchalant one-touch passes without even looking, that really sets him apart from the rest.

It can get him into trouble at times though. He occasionally attempts to hold onto the ball for too long in the vain hope that he can shake off his markers and conjure up his next magical piece of skill, when a short and simple pass might have been the better option.

Sporting’s number eight has all the hallmarks of a great playmaker, combining excellent technical proficiency with intelligent off-the-ball movement. His ability to create chances for teammates as well as his knack for scoring goals make him a valuable asset for any side.

With a move to one of Europe’s biggest leagues likely to occur in the near future, Bruno Fernandes will soon have the platform to show exactly why he can become the next of the great playmakers.