Sergio Gómez career has been very busy so far. He decided to sign for Borussia Dortmund aged only 17 and being one of the most talented players in La Masía. The Germans paid 3 million euros for the teenager in 2018. In the 2018/19 season, Gómez played mostly for Dortmund’s U19 and second teams, with his first-team experience limited to seven minutes across three matches.

At the start of the current season, Gómez joined Segunda División’s Huesca on loan. His first real experience of first-team football would come at a team built to pursue the promotion to La Liga. Under the coaching of Michel Sánchez, Gómez aimed to prove he could translate his great performances at the European U19 Championship – Spain were crowned champions with Gómez starting most games – to the professional game.

This tactical analysis will look at this impact at Huesca and how he’s adapting to first-team football with a view to his possible return to Borussia Dortmund.

Sergio Gómez is an attacking midfielder who has mostly played as a right inside forward. As a typical Barcelona academy graduate, his best traits are his technique, positioning and awareness.

This season he has played 28 league matches – all but three – starting 14 of them. He usually plays as the right midfielder in a 4-1-4-1 formation, but has been also used as a left or central/attacking midfielder in other tactics. We can see this positional flexibility in his heat map below: 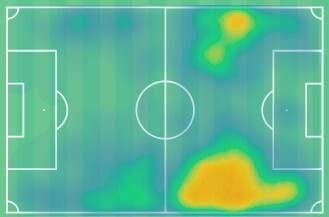 Gómez attacking stats give a good overview of his playing style. He keeps possession well with his passing and dribbling (4.24 dribbles/90′) while still having some quality when taking risks (0.52 key passes/90′). He also puts a good amount of crosses (3.1/90′), but with only 1.38 touches in the box/90′ and 2.98 passes into the final third/90′, his end product needs to improve a lot and he only achieves 0.17 goals+assists/90′. 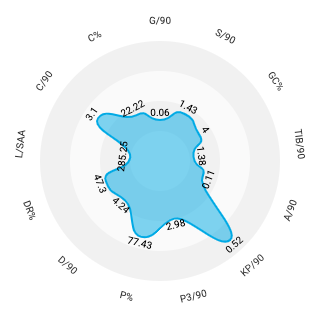 In this scout report, we will look at how Gómez performs at his most used position this season: right midfielder. Even if on paper he occupies the right flank, Gómez tends to come inside and try to play in the square formed by the centre-back, the left-back and the midfielders in from of them.

Gómez is really good at moving behind the back of the opposition midfield to create progressive passing lines. This movements also open up spaces for his right-back to attack.

As it’s usual in midfielders educated at Barcelona, Gómez is always scanning his surroundings and his awareness is very good. He always has an open body shape and is great at receiving the ball in small pockets of space. His technique and agility allow him to receive and turn in just one touch, quickly facing the direction he wants.

In the next example, Gómez has positioned himself in the zone described above, in the right half-space between the opposition midfield and defensive lines. He controls the ball with his left foot, the furthest from the rivals, and is left facing forward with options to progress. Also, he attracts the attention of several players and leaves spaces for his right-back to attack.

He also makes good runs attacking the space between the centre-back and the full-back when he has the chance.

Gómez’s technique is another of his assets. He can control and carry the ball very accurately in tight spaces. He has a quick change of pace too and uses it to dribble in one-vs-one situations on the wing.

His vision is also good. When he receives the ball, he thinks quickly and finds passing lines before being under pressure. He usually passes the ball into good zones, finding free teammates and moving the ball around to open spaces in the defensive line.

Below, Gómez cuts inside from the right and, instead of crossing, he passes the ball to a teammate at the edge of the box. This is a good decision but also shows how Gómez doesn’t usually try to assist and prefers to continue building the attacks with patience.

When he has the ball, Gómez likes to cut inside and advance with quick combinations. After passing, he continues his movement to receive it back. He’s difficult to dispossess when dribbling as he changes direction easily and usually finds free spaces to escape pressure. He has some issues when he has to protect the ball using his body as he’s small and hasn’t developed his strength yet.

In the image below, we see Gómez passing the ball forward and continuing his run to receive it back in a zone from where he can create. He can use this kind of plays more often when surrounded by technically gifted players as in the Spanish youth sides.

He’s also good at carrying the ball forward using his pace and beating players with his skill in one-vs-one situations. His 4.24 dribbles/90’ and 2.24 progressive runs are better than the majority of midfielders in Segunda División and show his ability on the ball.

Even if his technique is good and he understands the game well as we have seen in this analysis, Gómez’s final product still needs a lot of improvement. He is a good playmaker and his passing usually makes sense and serves to progress and build the attacks. He does have good delivery from crosses, both in open play and set pieces, but he doesn’t seem to have the vision to assist, and he doesn’t get into good shooting positions.

Gómez needs to improve his attacking positioning, especially inside the box. He usually stays outside the box providing a support passing option, and he doesn’t attack dangerous spaces as a goalscorer would do. As a result, he only has 1.43 shots/90’, and most of them are from outside the box. He has only scored one goal this season from 2.05 xG, so his finishing could be better too.

Below we see his shot map from the current season. His preferred shooting positions are just outside the box on the right side, but most of his shots are blocked.

Something similar happens with his last pass. He usually plays short simple passes, progressing the ball well and producing good combinations in tight spaces near the goal. But these passes are mostly part of longer attacking combinations rather than being dangerous by themselves. As we can see in the next diagram, his shot assists mostly come from the wings in the form of crosses.

In the example below there’s an example of Sergio Gómez’s lack of vision when he has to assist. He leads a counterattack and has two passing options: he can pass left and put his teammate one vs one against the goalkeeper, or he can pass right and give the ball to the overlapping full-back. He chooses the simplest pass when he could have created a goal.

Used to play in technically dominant teams during his youth career, Gómez needs to adapt to the real game, where playing very quickly in tight spaces is much harder and rivals can capitalize on any mistake.

He has to improve his decision making regarding where and when to take risks. Sometimes takes too many risks trusting his teammates to control and give back passes in difficult situations. Other times, he tries difficult and unnecessary passes when he should have played simpler.

In the play below, Gómez attempts a high pass to his centre-back, but he doesn’t put the necessary accuracy in it and it ends up being intercepted. The rivals have then a two-against-two opportunity. Even if the pass was successful, it wouldn’t add much to the play so the best decision would have been a different one.

In the defensive part of his game, Gómez still needs improvement. He works hard and is good at counter-pressing after losing the ball, another trait he may have learned at La Masía. But he doesn’t have the strength to win duels and his work rate is just decent so even if he’s not a complete liability for Huesca when tracking back, he could still improve. Again, he’s not used to defending a lot so it’s a part of the game that he’s experiencing for the first time.

Gómez is experiencing the step from academy to professional football. Used to play in winning teams where his technique and vision were enough to make the difference, he’s struggling to make a real impact in a much more competitive environment as the Segunda Division.

However, Gómez still is a technically gifted player who reads the game very well. If he continues making progress in his consistency and finds ways to show all his quality in his end product, he still has plenty of time to reach the potential he showed when he signed for Dortmund.

It’s easy to forget Gómez is only 19 years old. He’s getting playing time, which is very important at this stage. He has seen his progression rewarded with his debut for Spain U21, playing alongside the likes Ansu Fati or Ferrán Torres. With the probable departure of Jadon Sancho, Borussia Dortmund must be monitoring Gómez very closely as a long-term replacement.