Sam Lammers is a powerful young Dutch centre-forward on the books at PSV Eindhoven. Last season at PSV saw Lammers consistently score in the Dutch second division with 11 goals in 16 games for the PSV reserve team, Jong PSV. He was however only able to get into seven games in the Eredivisie for PSV first team.

Going into this season it was clear that Lammers at age 21 needs first team minutes to progress which was something that PSV could not provide. At the centre-forward position, PSV has mainstay Luuk De Jong and additionally purchased young Argentinian Maximiliano Romero who are both ahead of Lammers in the depth chart. Fortunately for Lammers, he was given a season-long loan opportunity to join Heerenveen.

Lammers has made an instant impact in his loan spell for Heerenveen. He has started all 13 Heerenveen games and has scored 6 goals. His 6 goal tally is tied for the team lead with young Michel Vlap.

Sam Lammers stands 191 cm tall and weighs in at 77 kg. It is easy to class him as a tall powerful centre-forward. His strongest attribute is his good touch and control that he uses to off-balance defenders around the box creating windows to shoot. He is a goal scorer.

In the picture below we see Lammers, in Blue, with the ball on his favoured left foot in front of the opponent’s back line.

Lammers drives to his right off balancing the defence. Below we see the defence collapsing on Lammers with five defenders. Three of the defenders end up facing their own goal with #2 in white getting completely turned around.

With the defence off balanced, Lammers touches back onto his left foot to create a window for a shot.

Lammers has now created space for a shot with his left foot which he brilliantly curls past the keeper.

Lammers is not the fastest player but he is smart on the dribble to create space.

Movement Off the Ball

A key for any good goal scorer is to do your work before the ball arrives. Smart movement off the ball is a crucial talent.

Below is an example of Lammers ability to read the play and position himself off the ball to create a goal. Lammers is in an offside position on the left of the picture. The opponent central defender #6 is stepped up marking a teammate of Lammers.

Lammers reads the positioning of the defender and runs back onside on the blindside of the defender. His movement sets up an opportunity for a ball into Lammers with the defence scrambling.

Lammers brings the ball down and turns onto his left foot to create a window to shoot.

With the window to shoot created, Lammers is able to tuck the ball inside the far post.

Lammers accuracy around the box once again has the goalkeeper picking the ball out of his net.

Another example of Lammers ability to read off the ball situations. Here Lammers is at the top of the box as the ball is progressing towards the end line on the left.

Lammers once again gets on the blindside of the defender setting up a run towards the near post.

He breaks towards the near post but the pass is behind him.

Lammers quickly pulls the ball back with a right-footed rollover. This movement of pulling the ball back creates space from the defenders and positions his body for a powerful shot.

After setting up his body and the ball position, Lammers calmly strikes through the ball with his left foot.

The result is another goalkeeper picking the ball out of his own net.

The above example shows another way of Lammers getting the ball in a tight space. He quickly and calmly creates a window to finish. He brilliantly cleans up a bad pass and with one quick settling touch creates a goal.

All of the above examples have shown Lammers on his favoured left foot. Lammers is equally adept at finishing with his right foot. It is truly a situation where he has no “weaker” foot. Look at this example with Lammers driving the ball down the right flank on a counter opportunity. 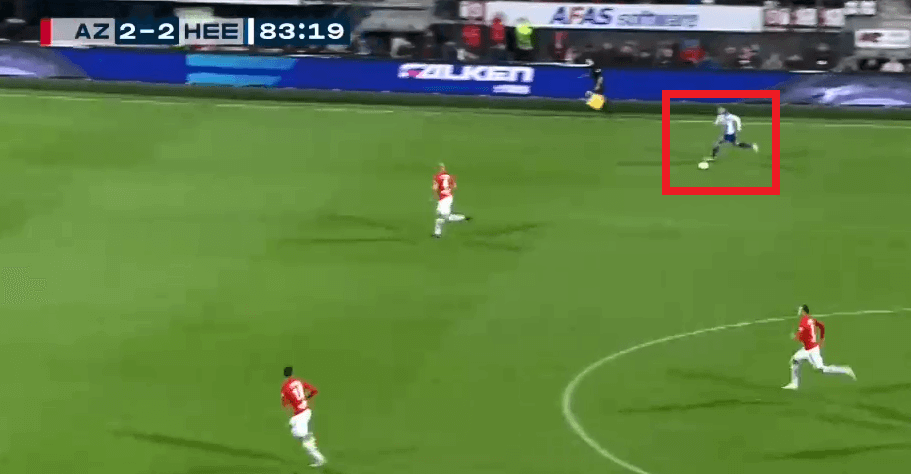 Dribbling into the box, the defender is “showing” Lammers towards his right foot. Lammers does two stepovers to off balance the defender. 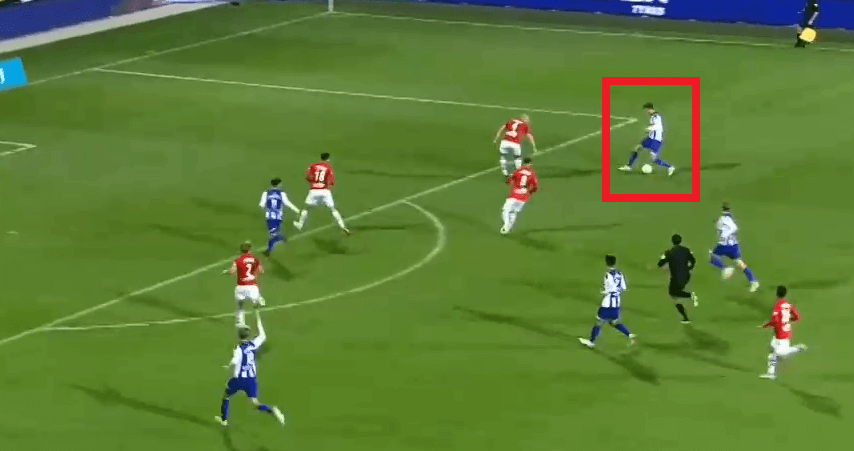 Once the defender is on their heels, Lammers drags the ball on to his right foot and explodes into the box.

A window is created and Lammers blasts a right footed shot.

And again the ball is in the net.

Sam Lammers is a real talent around the box. His ability to create windows and put shots away is his calling card. Where Lammers needs to improve if he wants to find playing time back at PSV after his loan spell is his build-up play.

Lammers has a good consistent first touch. His struggle is passing with his back to goal. Lammers defaults to a one-touch pass back into midfield. He consistently lays the ball off with a one-touch pass. That is a good solution some of the time but it is not the best solution all the time.

One of the requirements of a centre-forward receiving with their back to goal is to bring teammates into play and allow them time to get up into the attack. Lammers consistently defaults to playing the ball negative with one touch in the middle third.

Here we see Lammers is targeted for a penetrating pass into his feet from his central defender.

Instead of getting his foot on the ball to hold it up and make a play, Lammers attempts a first touch pass.

The result is the ball is lost in the middle third and Heerenveen is forced to defend a counter attack. 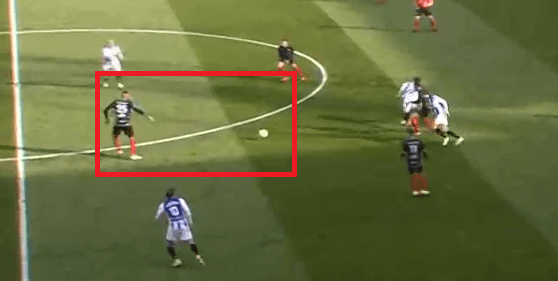 Lammers needs to improve his link-up play to allow the build-up to go through him. By getting the ball on his foot and holding up play, a centre forward is providing the pause required for attacking options to join into the play.

Let’s contrast Lammers hold up play to the young Argentinian, Maximiliano Romero. Romero is a like for like comparison as Lammers loan was caused by PSV utilizing Romero as the backup for Luuk De Jong instead of Lammers.

Here we see Romero, in white, receive the ball with a defender on his back in the middle third of the field.

Instead of laying off the ball with one touch, Romero decides to get his foot on the ball, pause, and then turn. This holdup play allows the attacking runners to join in. This pause causes the defence to scramble unsure to cover the runners or Romero. A simple trapping of the ball creates a great numbers up scenario. 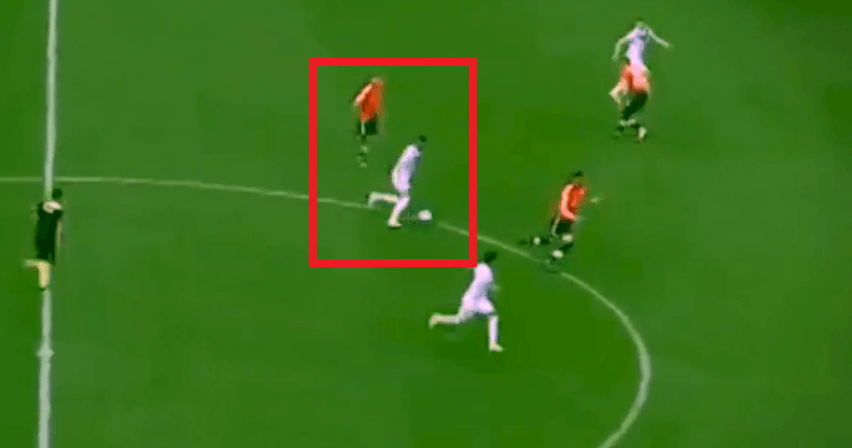 The next level for Lammers should include more patience in the buildup phase of play. He is calm and composed around the box. He needs to apply that composure to the middle third of the field instead of defaulting to the one-touch layoffs. The skillset is there for Lammers to improve.

Sam Lammers is definitely a goal-scoring talent who will always find a role on a team. He possesses a great ability to off-balance defenders and get accurate shots off with both feet. The key for him is to continue to gain experience and become a more complete player. His development beyond just his play around the box will determine how high his career will rise.