At the end of the 2018/19 EFL Championship season, Daniel Farke and Norwich City rightfully received praise for a stellar league campaign which saw the Canaries win the title by a somewhat comfortable five points while scoring the most goals in the league(93) by six. Fast forward to present day and the club is severely struggling to maintain pace with the rest of the Premier League, sitting last on the table and eight long points away from safety. Farke and company have acted early in the January transfer window in an attempt to stave off the threat of relegation. The 43-year-old manager has signed attacking midfielder Ondrej Duda on loan from Hertha Berlin for the remainder of the season, as well as fellow Bundesliga veteran Lukas Rupp, a central midfielder from Hoffenheim, on a permanent basis. This tactical analysis scout report will evaluate the former’s style of play, as well as how the Slovak might fit in at Norwich.

Who is Ondrej Duda?

Ondrej Duda began his footballing career in his home country, joining the local youth academy of MFK Snina, and then VSS Košice. After making his professional debut at age 17, Duda scored five goals in 19 appearances the following season in the Slovak Super Liga. He helped his side finish fifth on the league table and qualify for the Europa League qualifying rounds via winning the Slovak Cup. After topping off this successful season with the 2014 Slovak Footballer of the Year Award, Duda moved north of the border, joining Polish powerhouse Legia Warsaw in the winter window. He continued to both create and finish goalscoring opportunities before finally transferring to Bundesliga club Hertha Berlin in 2016, where he has seen various levels of playing time. Additionally, Duda rose throughout the Slovakia youth national team levels and has been capped 36 times while scoring five goals for the senior side.

Throughout his career, Duda has played primarily in an advanced attacking role. Occupying zones in the central and half-space attacking areas behind the striker, the 25-year-old is a key cog in transitions and ball progression into dangerous areas. 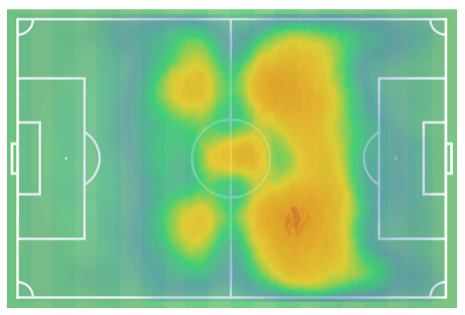 Duda’s heat map above portrays the areas he plays in on the pitch. Notice the emphasis on the half-spaces in attack, as these are exceptional areas to begin exploiting space between the opposition as well as chance creation.

From these spaces, Duda progresses the ball forward through either aggressive dribbling or sharp, calculated passes. 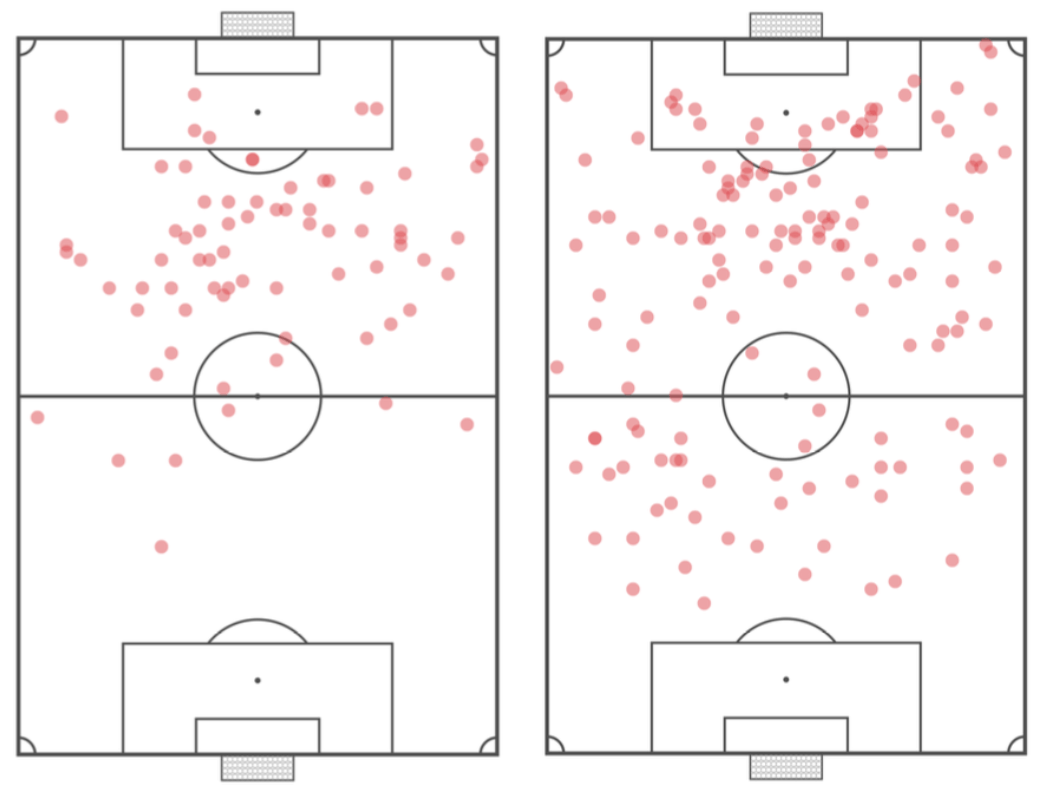 Duda’s smart passes(left) and 1v1 dribbles(right) are also good indicators of the spaces Duda attacks. A smart pass is any creative or significant pass which progresses the attack. Notice a high number of these actions take place in zone 14. While at Hertha Berlin, Duda was situated as the central attacking midfielder in a 4-2-3-1/4-4-1-1 shape, and he will likely do the same at Norwich in Farke’s tactics.

Duda’s tactical intelligence paired with his positional movements and high technical ability allows him to penetrate a number of dangerous areas in the final third and connect with the strikers in front of him. 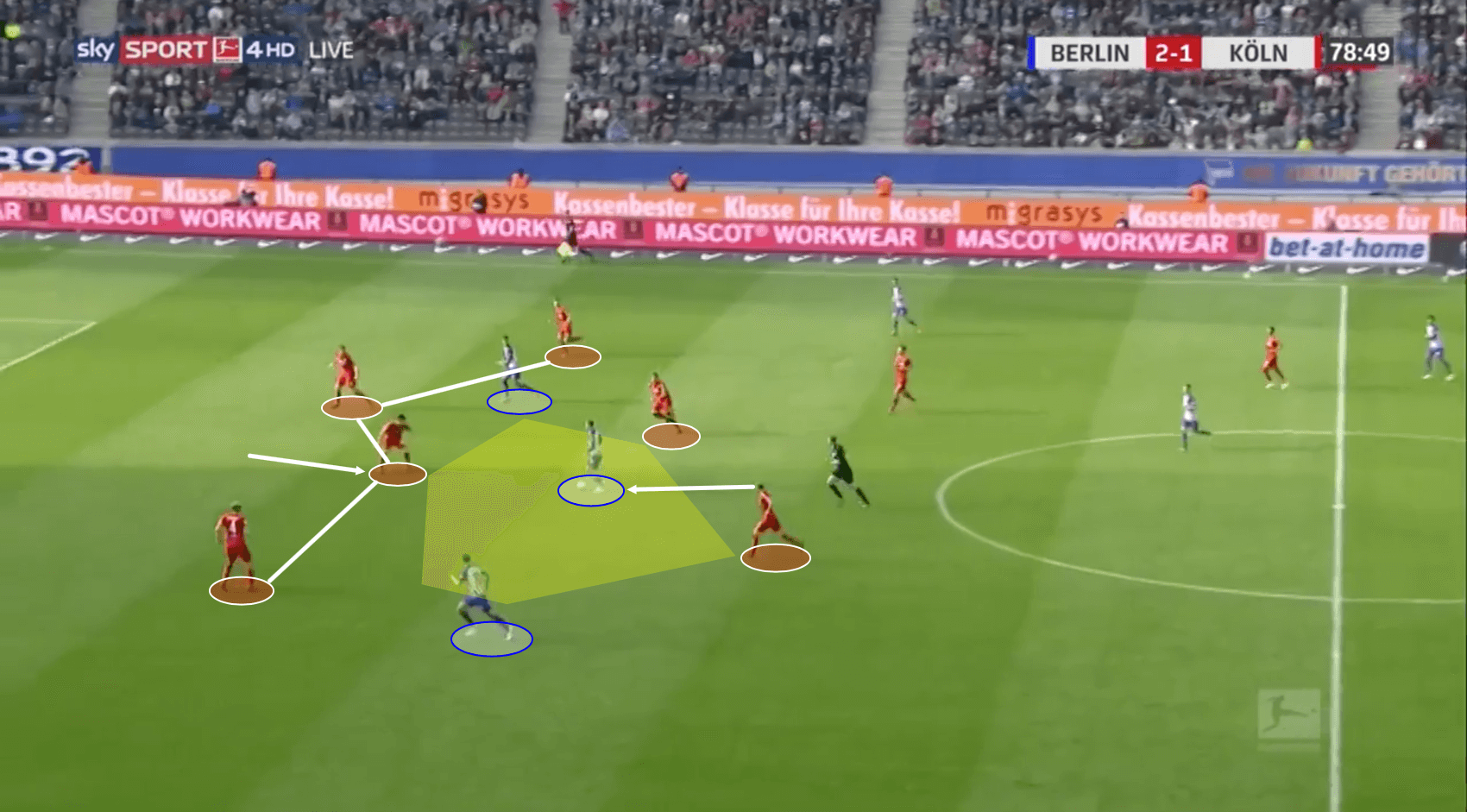 In this sequence, Duda has received the ball and dribbled past the defensive midfielder into the space between the two defensive lines. As stated, areas such as this are where many of his ball progressions occur. The ball-side centre-back moves forward to pressure Duda. 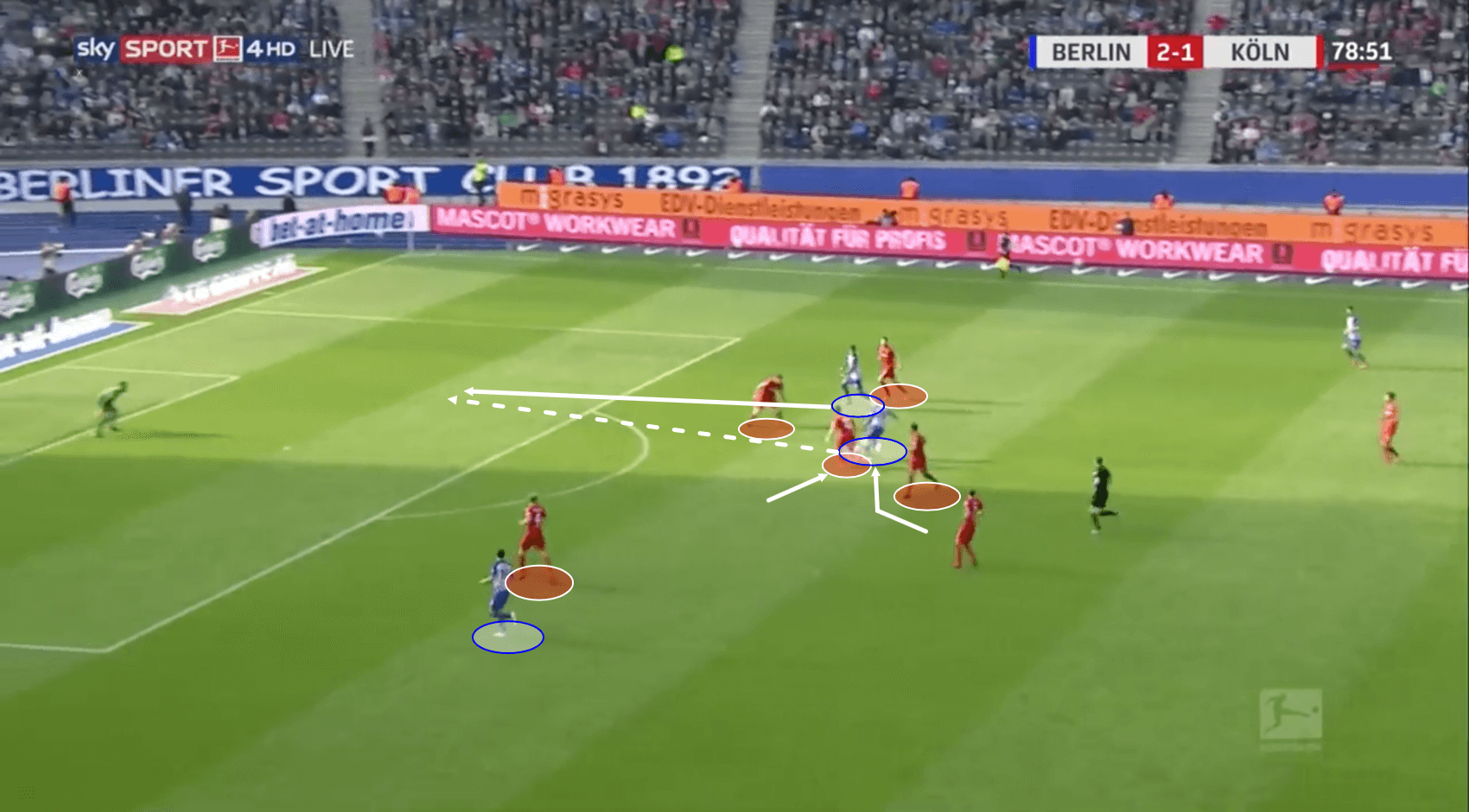 Duda uses this opposition movement to his advantage. After utilising his tight dribbling ability to move around the pressing centre-back, he now has a spatial opening in the back line. He completes a narrow pass near this area past the other centre-back, who has frozen in place due to Duda’s successful dribble and the run made by Duda’s teammate.

Duda also is apt in building up quick transition attacks from deeper areas of the pitch. 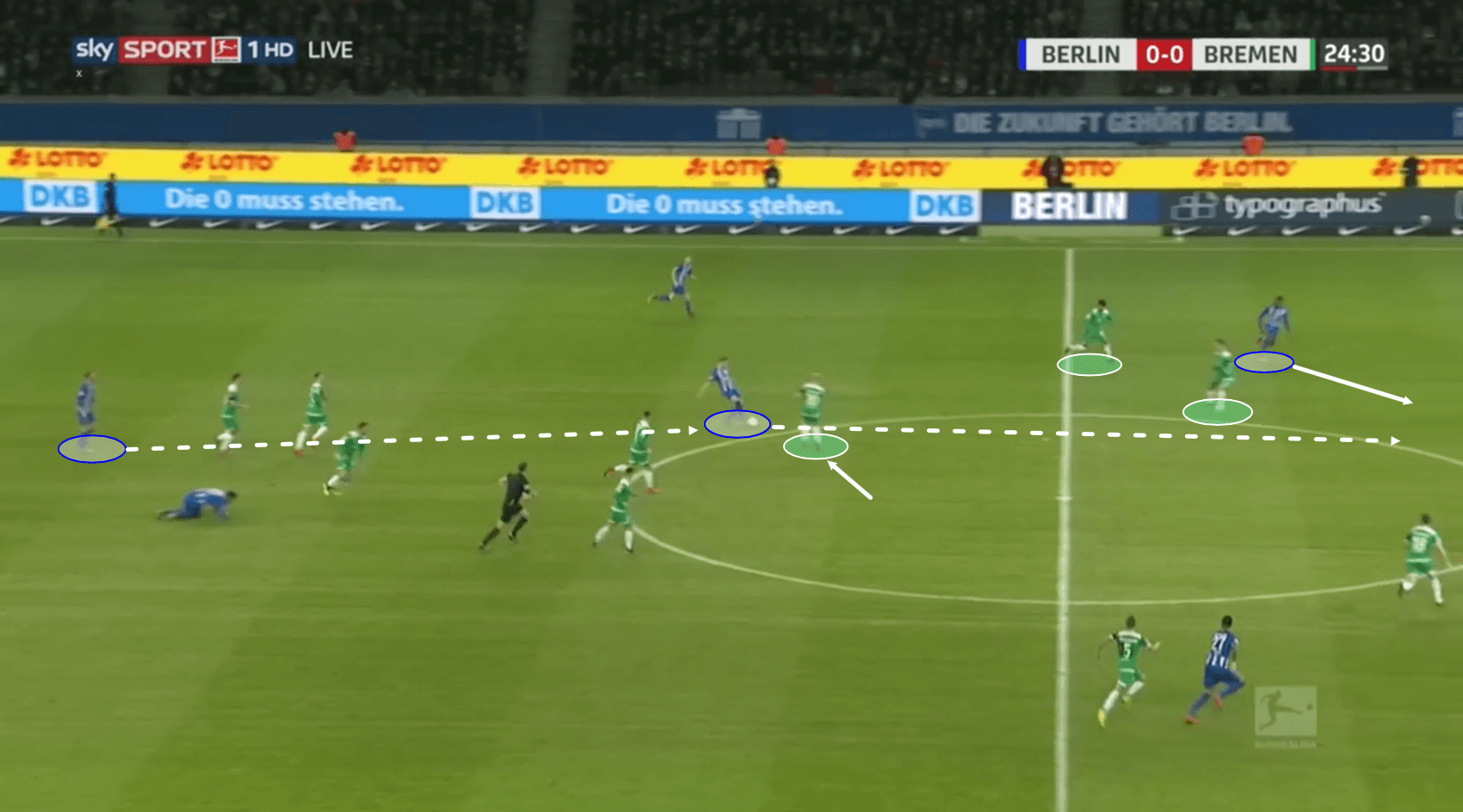 On this quick team transition from defence to attack, Duda is comfortably able to control a pass, turn, and complete a long through ball past the high-playing back line before the opposing deep midfield pressure reaches him. 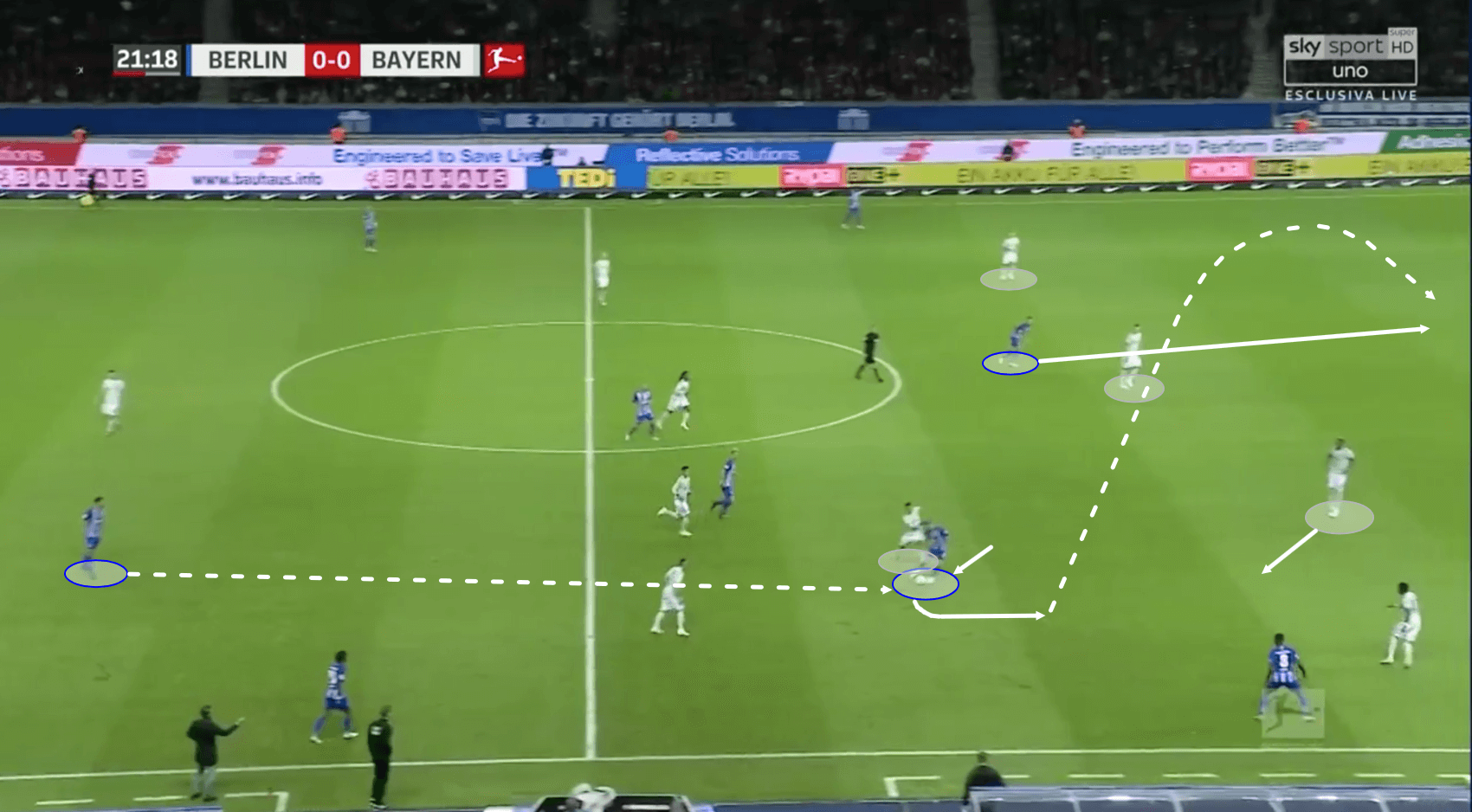 Here is another example of Duda’s transition play and outstanding press-resistance. Upon receiving the ball, Duda turns away from the pressing opponent, placing himself between the defender and the ball. He completes the turn towards goal and dribbles until pressure from the ball-side centre-back occurs, and finishes the action on the ball with another long ball to the opposite half-space behind the back line.

One principle in ball progression that is specially annotated in quick transition play is that a pass can travel faster than a player. Duda’s style of play is an excellent representation of this principle. This valuable characteristic could be extremely relevant while playing at Norwich. Quick and effective ball progressions in transition, including for example long balls to Finnish striker Teemo Pukki, could help Norwich minimise actions in their defensive third and switch focus to the attacking half.

In the advanced areas, Duda is equally beneficial on the ball. His technical ability is particularly prominent in these areas, as his press-resistance is even more visible due to more frequent pressure. 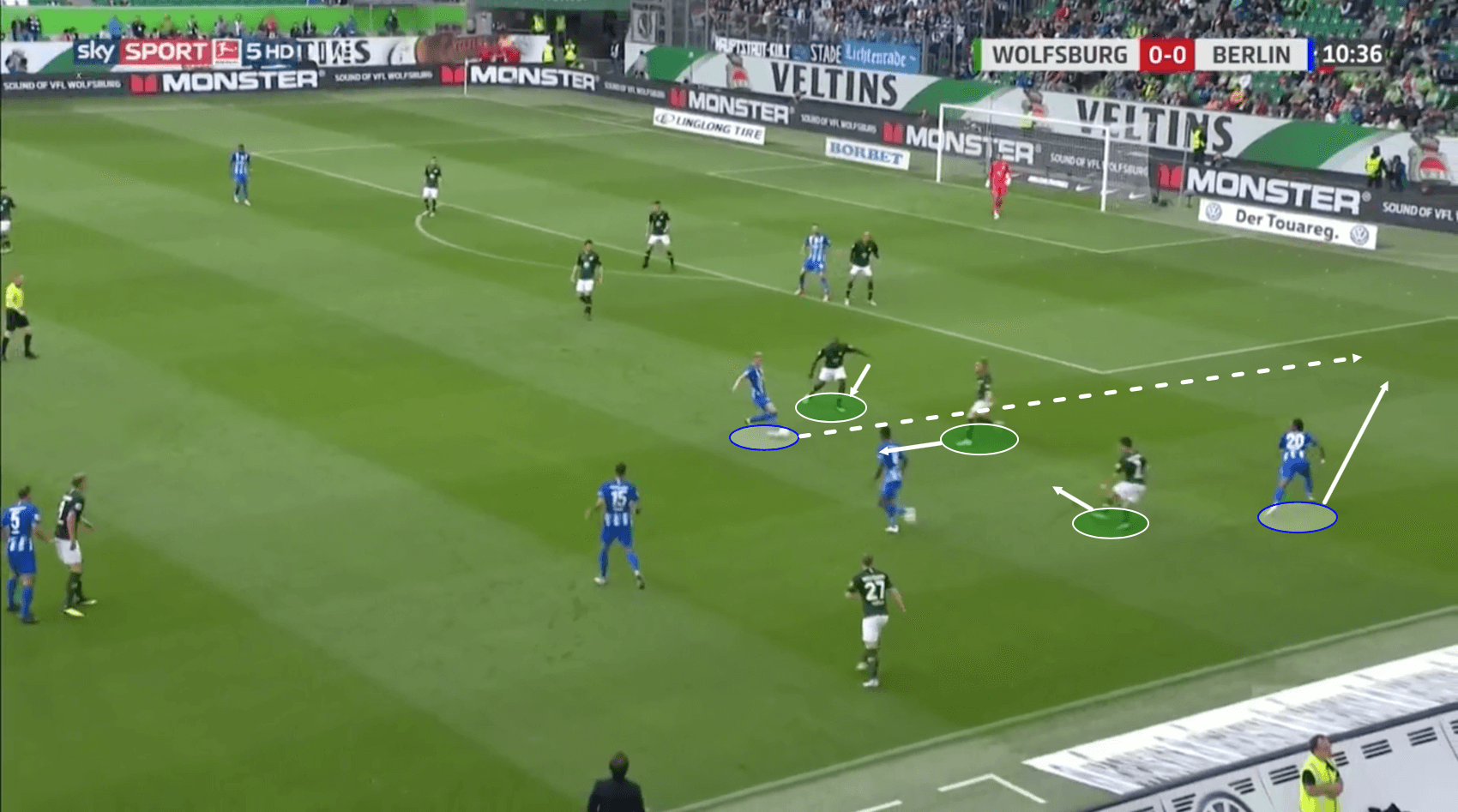 In the picture above, Duda controls the ball in the right half-space at the top of the final third. After taking one touch to invite pressure, the attacking midfielder hits an accurate pass between the defenders and down towards the end line, meeting the run of his wide attacking teammate. 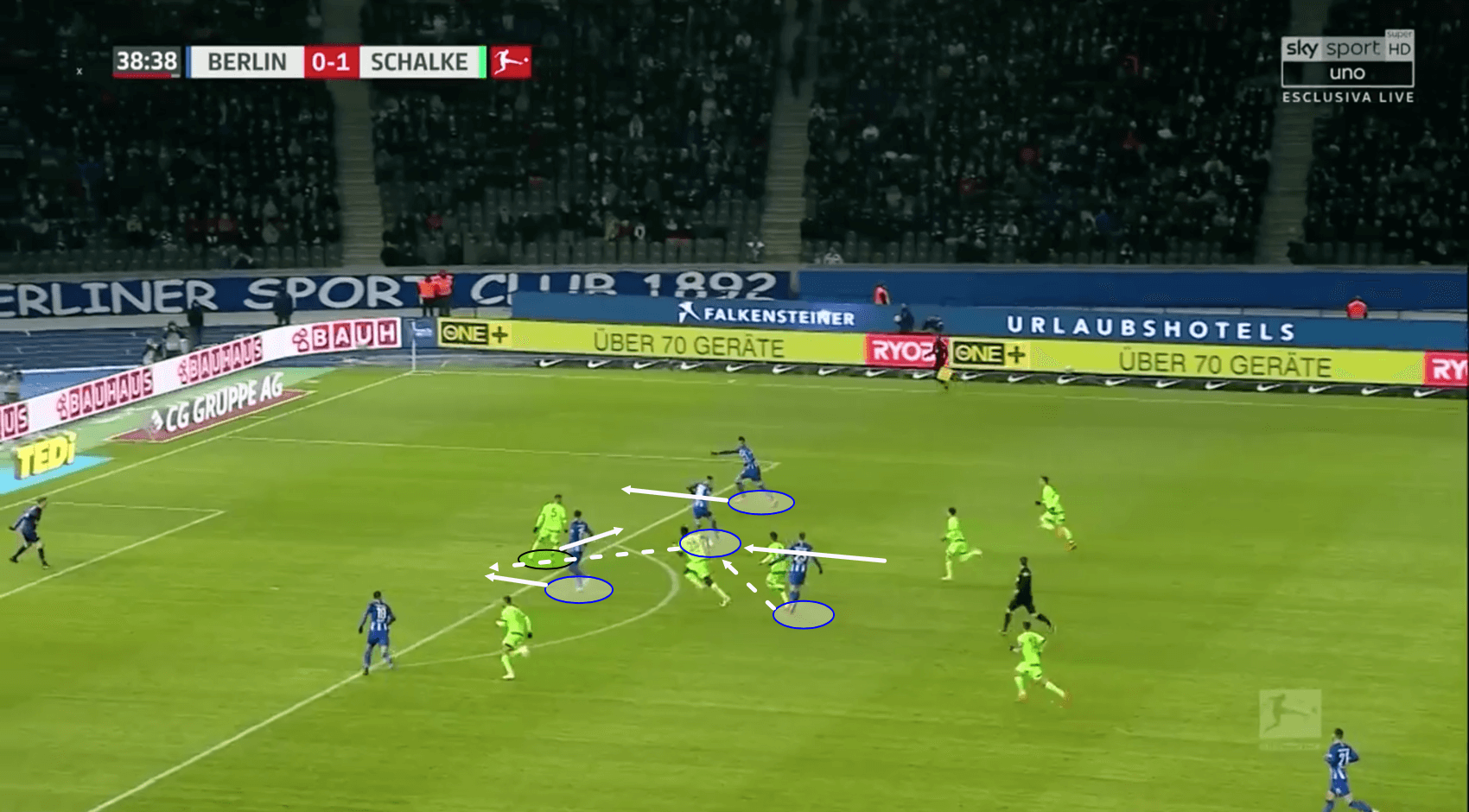 One of the more famous moments of Duda’s career was this sequence against Schalke, which was considered one of the best assists of the 2018/19 season. Once again in transition, Duda is in a dangerous position in front of the centre-back. He manages to gather a pass behind him by turning with his back now towards goal. With a Hertha Berlin attacker in the wide area of the right half-space, the centre-back shifts over to block this passing outlet. Duda, however, knows he also has a teammate making a run down the central area into the box, and after seeing the defender begin his action wide, the Slovak hits an ingenious backheel pass into the space the centre-back previously occupied, meeting his teammate’s run for an easy equaliser. This high level of technical creativity has playfully earned Duda the nickname “Dudinho”. 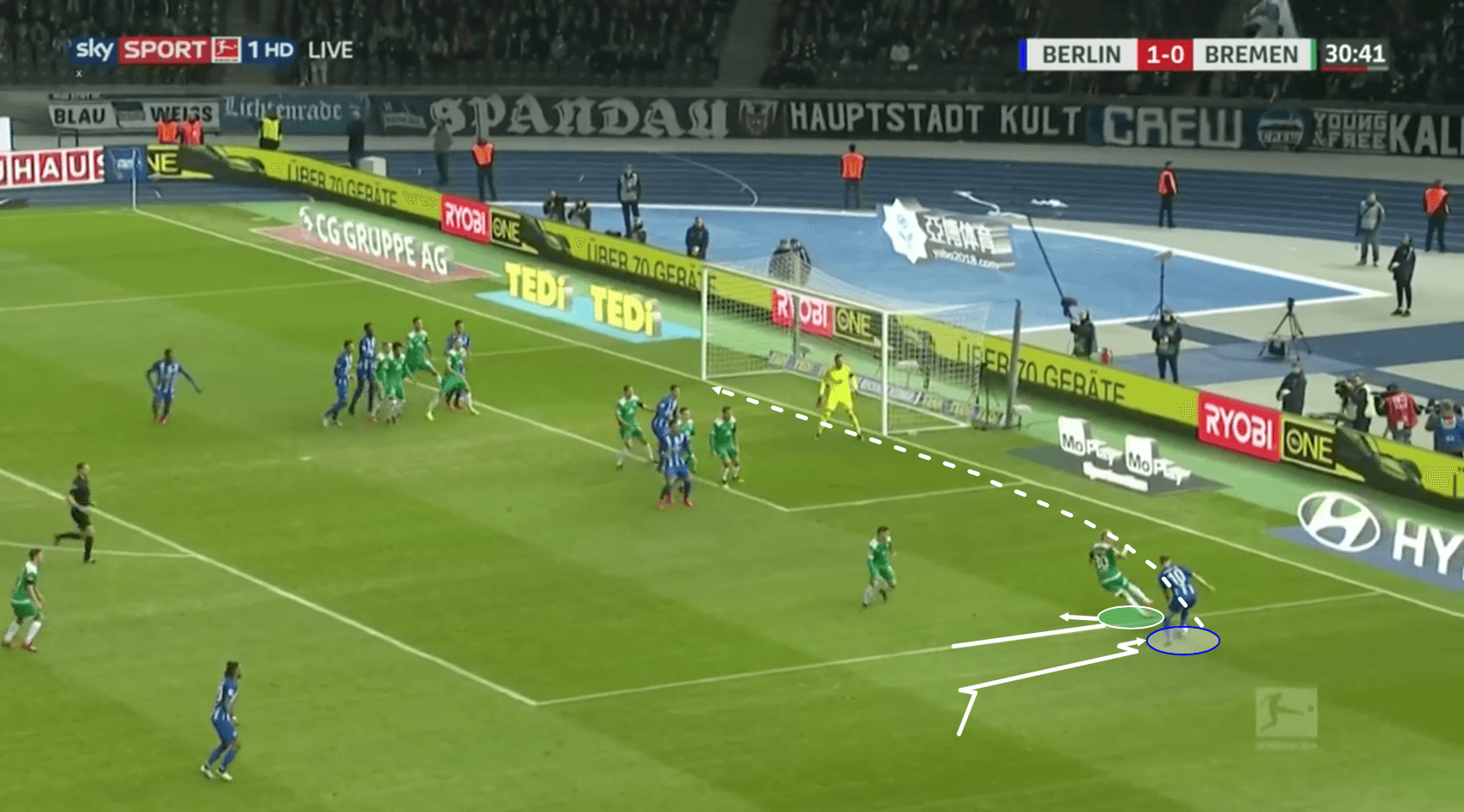 Duda can even attack well in wide areas. In this 1v1 scenario, he uses his ball control to force the opponent’s body to shift the opposite direction, giving himself space to execute a cross into the box.

Duda’s forward play can be too aggressive at times, and while he is a very good dribbler he’s not immune from losing the ball in dangerous areas. That said, his possession losses are often well into opposing territory thanks to his advanced positioning to begin with.

As is common with many technically-gifted attacking midfielders, Duda is also very adept at set-piece delivery. He has taken free kicks, corner kicks, and penalties for Hertha Berlin, and could be seen doing the same at Norwich; the East Anglian club has currently only scored three set-piece goals, tied for third-fewest in the Premier League. 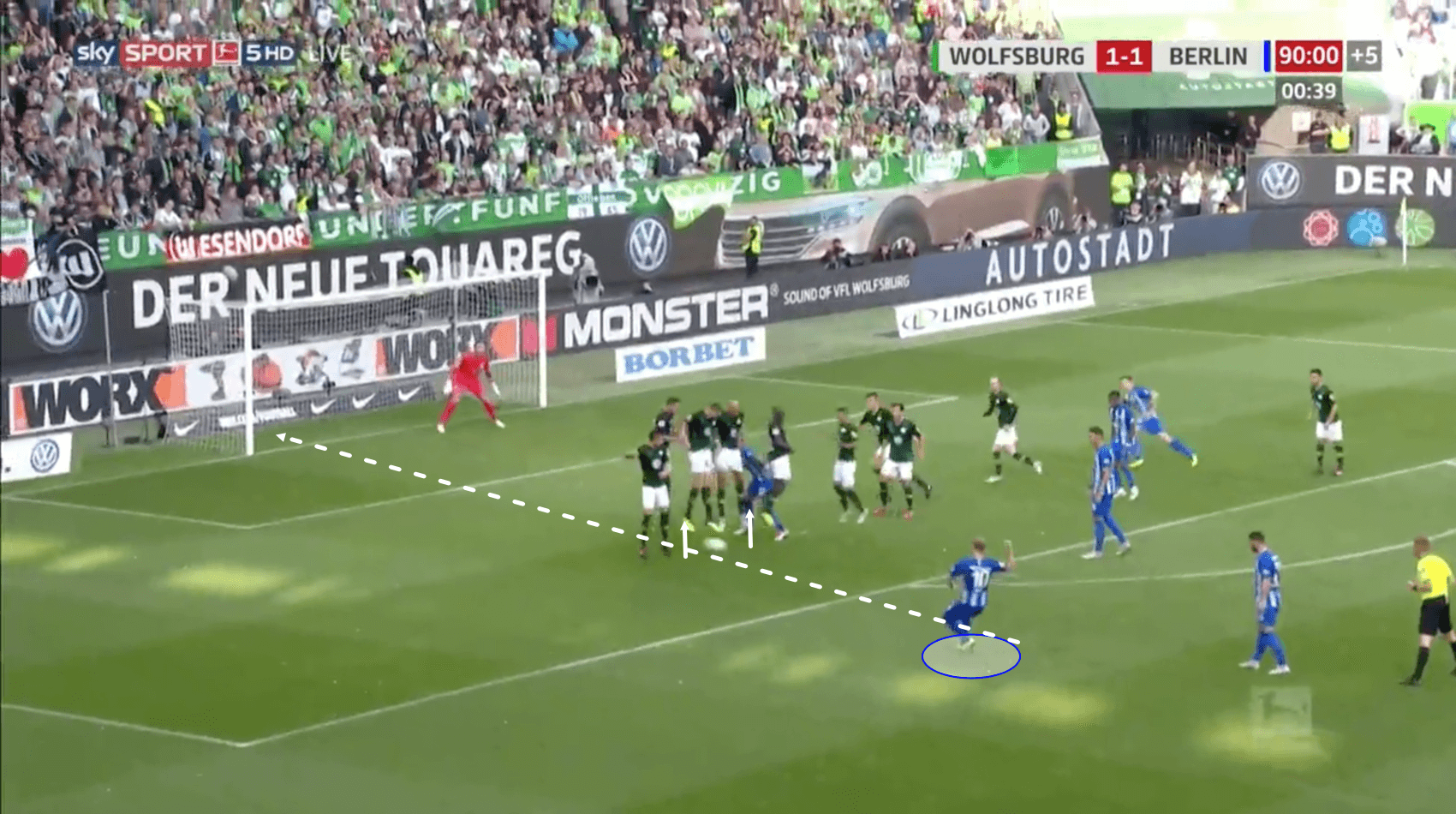 Here, Duda once again displays his creativity with a low-driven free-kick under the opposing wall to score a late go-ahead goal. 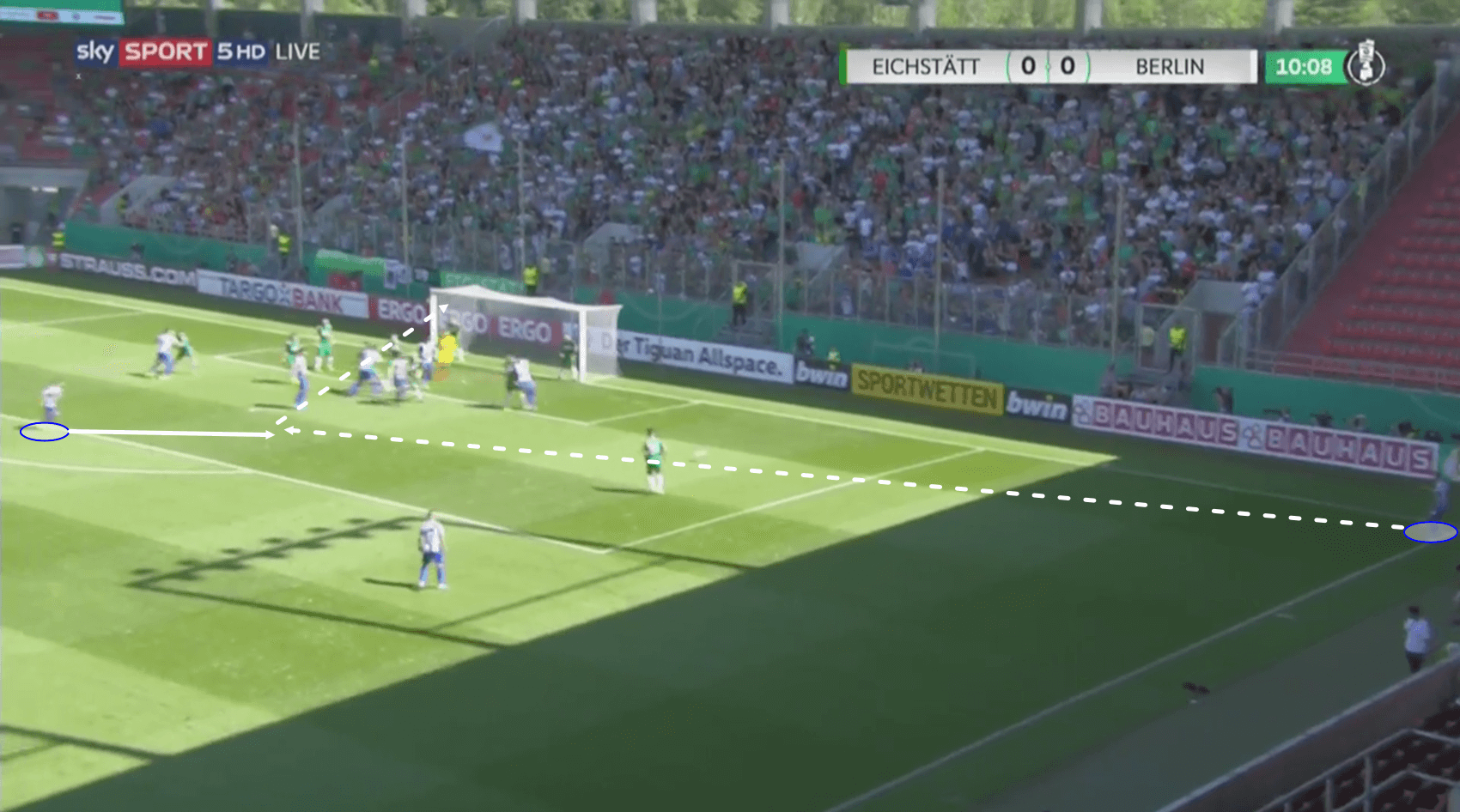 On this organised set-piece, Duda hits a hard ground pass to the top of the box, where an unmarked teammate has space to get a clear shot on goal.

While passing is his primary focus, Duda also doesn’t waste possession on goalscoring chances, as he tends to only take high-percentage shots. For example, last season 55.5% of his shots were on target with an impressive 31% goal conversion rate, besting a number of high-profile names who held a similar shot count such as Yussuf Poulsen, Lucas Alario, and James Rodríguez. 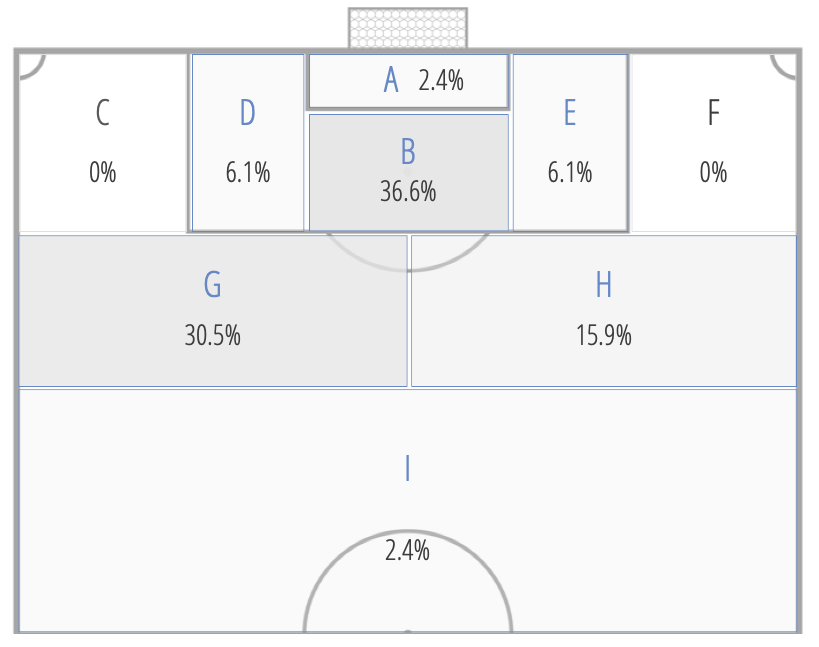 The above graphic shows Duda’s shot distribution on the pitch. A majority are in the central area inside the 18-yard box, again illustrating Duda’s care of the ball. The second most common area is just outside the penalty area coming from the left half of the pitch. This is due to Duda’s inclination to cut inside and shoot with his dominant right foot.

It was in this overall attacking style of play last season that Duda enjoyed his most successful statistical season of his career, tallying 11 goals and five assists in 32 appearances for Hertha Berlin. Norwich supporters will be hoping he can find that level of prolificity again this season.

Duda also gives a strong effort in defence. The Slovak defends best in pressing or gegenpressing situations, as is common among German clubs. 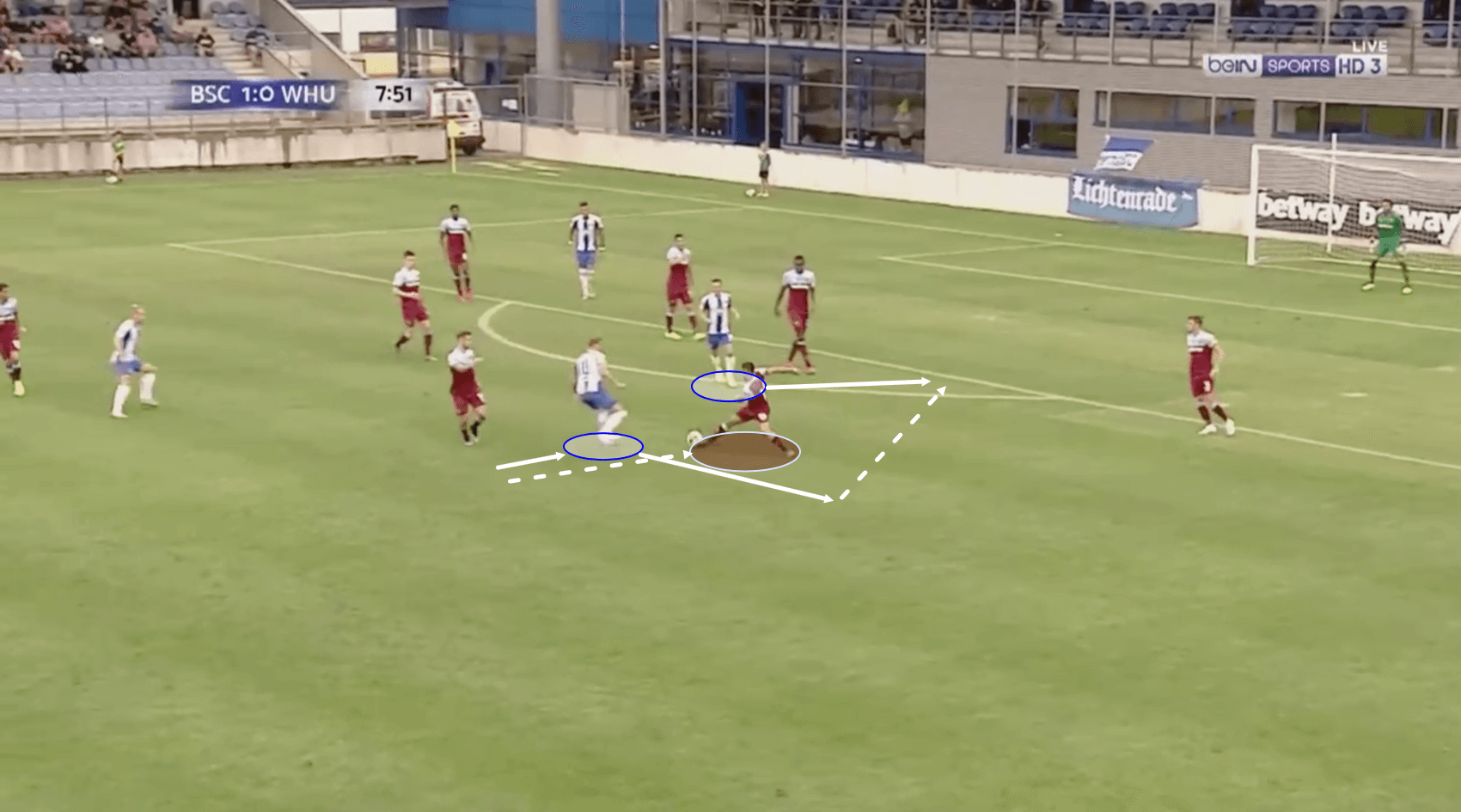 In this friendly against West Ham, Duda’s one-touch pass falls to the opposing deep midfielder. Duda quickly presses this opponent, then continues the attack in similarly quick fashion. 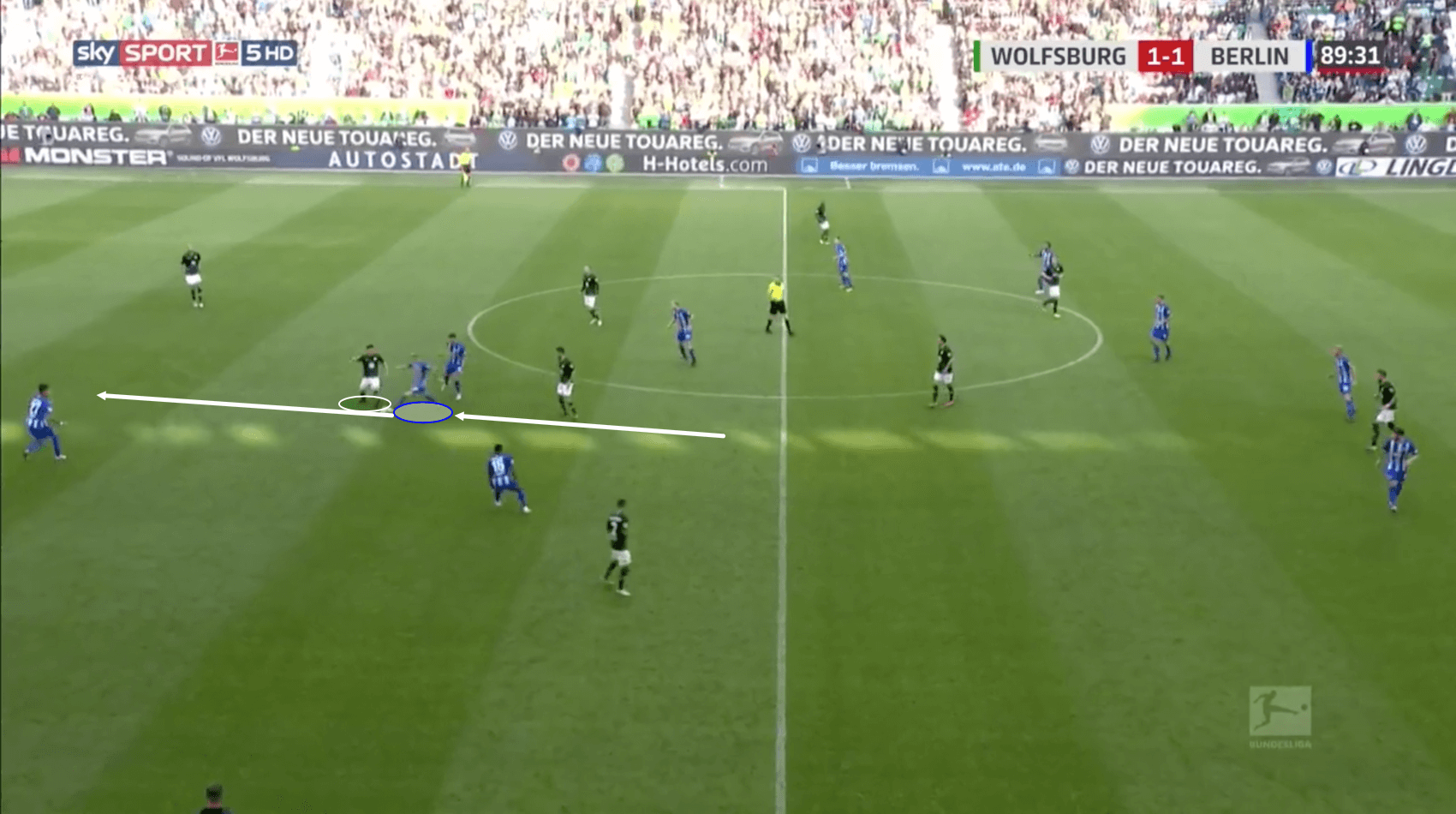 In this scenario, Duda sees the possessor take a poor touch and bursts forward from his central attacking position to press. He successfully takes the ball off the opponent and carries it into the final third, where he is fouled and earns his side the valuable free-kick opportunity seen earlier in this analysis.

Pressing and gegenpressing are popular forms of defending in modern football, Norwich included. While. Duda isn’t the most refined when it comes to tackling technique, his pressing acumen may be enough to warrant a more aggressive press in the latter half of the season.

Duda plays in a very similar role for his national team. Playing alongside midfielders such as Marek Hamšík and Stanislav Lobotka, Duda has become a consistent playmaker for his country. 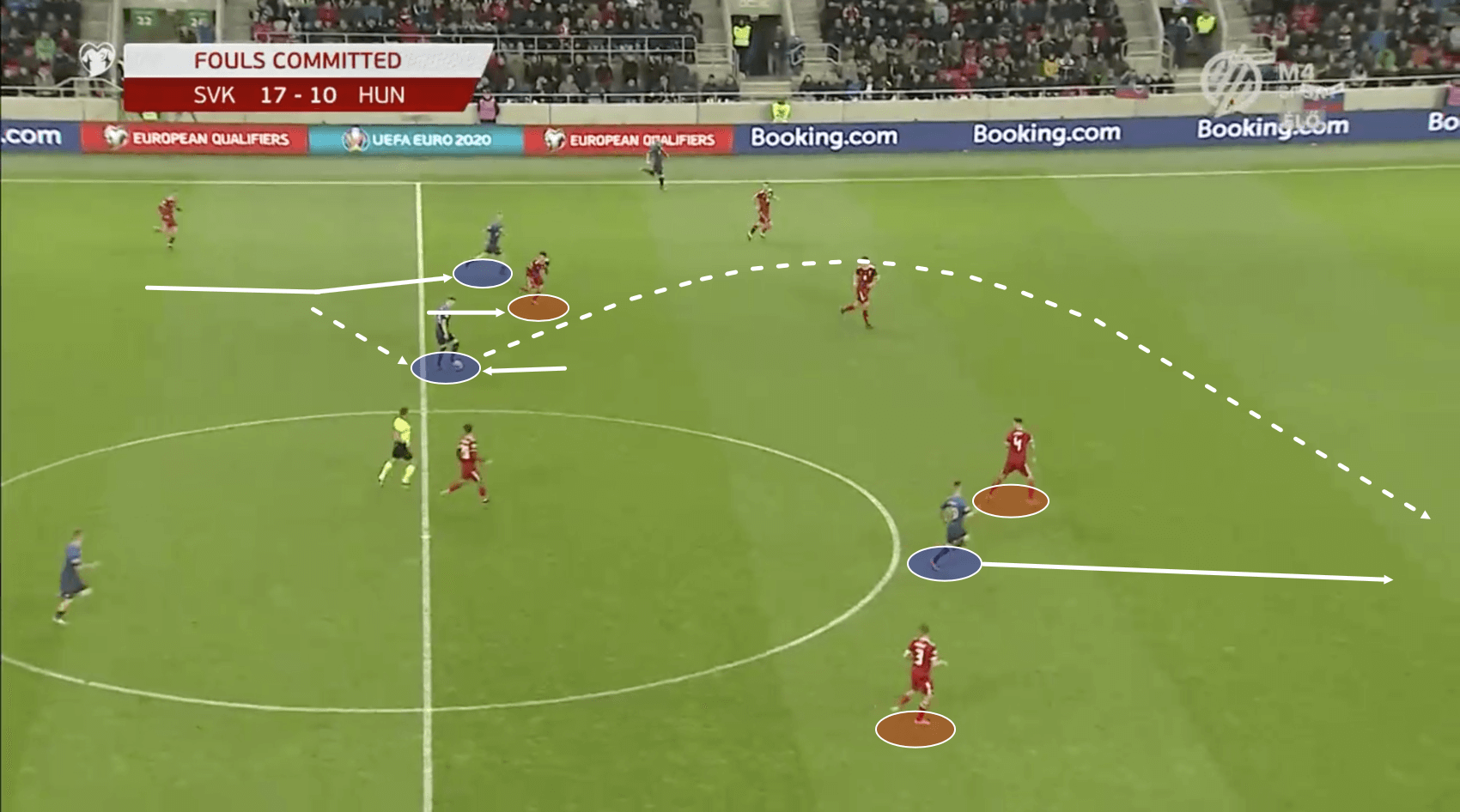 This example shows Duda dropping back in transition while playing for the national team. Not only does this action make himself a passing outlet for the deeper central midfielder on the ball, but it also relieves the pressure of the opposing defensive midfielder. Duda then continues the quick attack through an accurate long ball over the back line into the run of the striker. 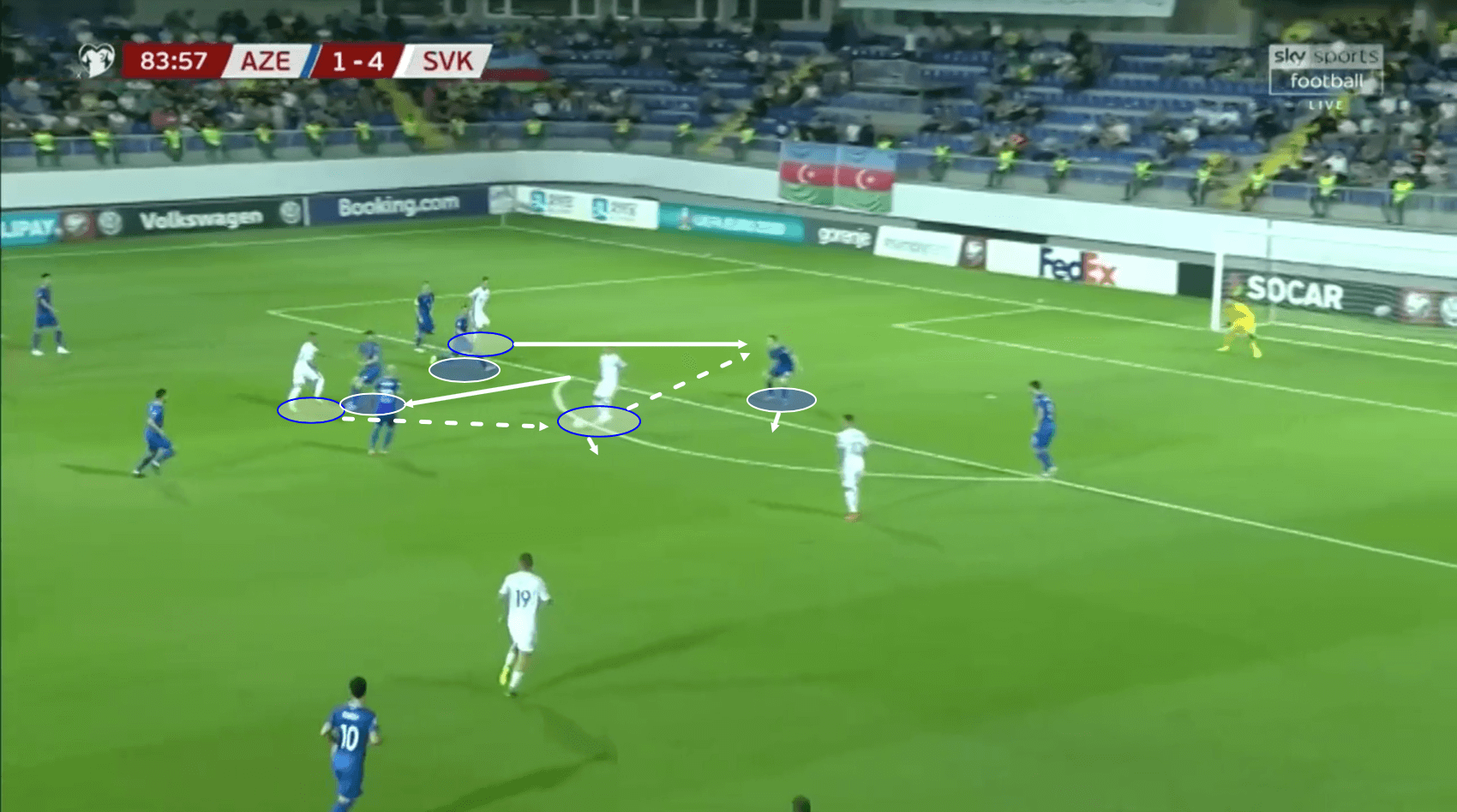 Here, Duda is occupying zone 14 in front of the back line. The opposing centre-back presses the ball, freeing up space in front of Duda. Duda receives a pass and uses a deceptive turn with his back to goal to freeze the lone centre-back in front of the ball. He then completes another savvy backheel assist to the wide attacker through the space vacated by the other centre-back.

After the departure of Hertha Berlin’s longtime manager Pál tDárdai last summer, who once called Duda “a little artist”, Duda has found playing time hard to come by this season, hence the loan move. At his temporary new club, there will be every opportunity for Duda to become a central fixture in the starting eleven and to have a significant impact in the attack. With Norwich’s style of play and their lack of consistency in goalscoring, Ondrej Duda’s positioning, ball progression, and technique can give Norwich a lifeline in the battle for relegation survival.