Nicolò Rovella is a deep-lying playmaker who has been regularly involved for Genoa’s U19’s across the 2019/20 season. The midfielder has almost exclusively played for the Rossoblù at Primavera level this season but he has made two first-team appearances as he came off the bench in a Serie A match against Inter and also featured in a Coppa Italia clash with Ascoli.

Playing his football under the guidance of Luca Chiappino, Rovella has featured in over 86 per cent of games when available, adding three assists in his 15 appearances. He has represented the Italian national team at U17, U18, and U19 levels, travelling with the Azzurri to the UEFA U19 Championship in Northern Ireland in 2020.

The 18-year-old is still on a youth contract with Genoa who are scrambling to try and sign him to his first professional contract in a bid to deter the interest from clubs such as Inter who are keen to add the Milanese midfielder to their talent pool.

In this scout report, we explore the important role which Nicolò Rovella plays for Genoa U19s, examining the Italian’s contributions across the defensive, middle and attacking thirds of the pitch through a tactical analysis.

This season Genoa U19s have generally favoured a 4-3-1-2 tactics formation under Luca Chiappino, the shape being utilised in 76% of matches in the Campionato Primavera, in which Rovella lined up as defensive midfielder, operating in the role of the deep-lying playmaker. 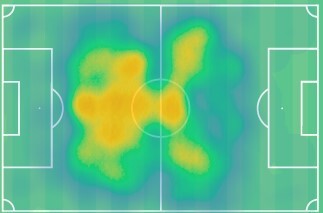 Rovella’s role in this system is to contribute towards Genoa’s attacking plays, often acting as the focal point of the team when in possession, using his passing ability to progress the ball into advanced positions through longer and more complex passes. Nicolò can often be found looking for diagonal balls, through balls, or passes over the top to team-mates who are either between the opposing line or making runs off the shoulder of defenders into the space behind the high defensive block.

The desire to influence the game can clearly be seen when carrying out an analysis of the Italian’s heat map, the midfielder has a significant presence across the whole of the opposition’s half, particularly in the middle three vertical channels. It is from this area of the pitch that Petrelli can look to utilise strength and ability on the ball to either relieve pressure from the Juventus defence by adopting the role of a target-man or win offensive duels to get himself goal-side of defenders. 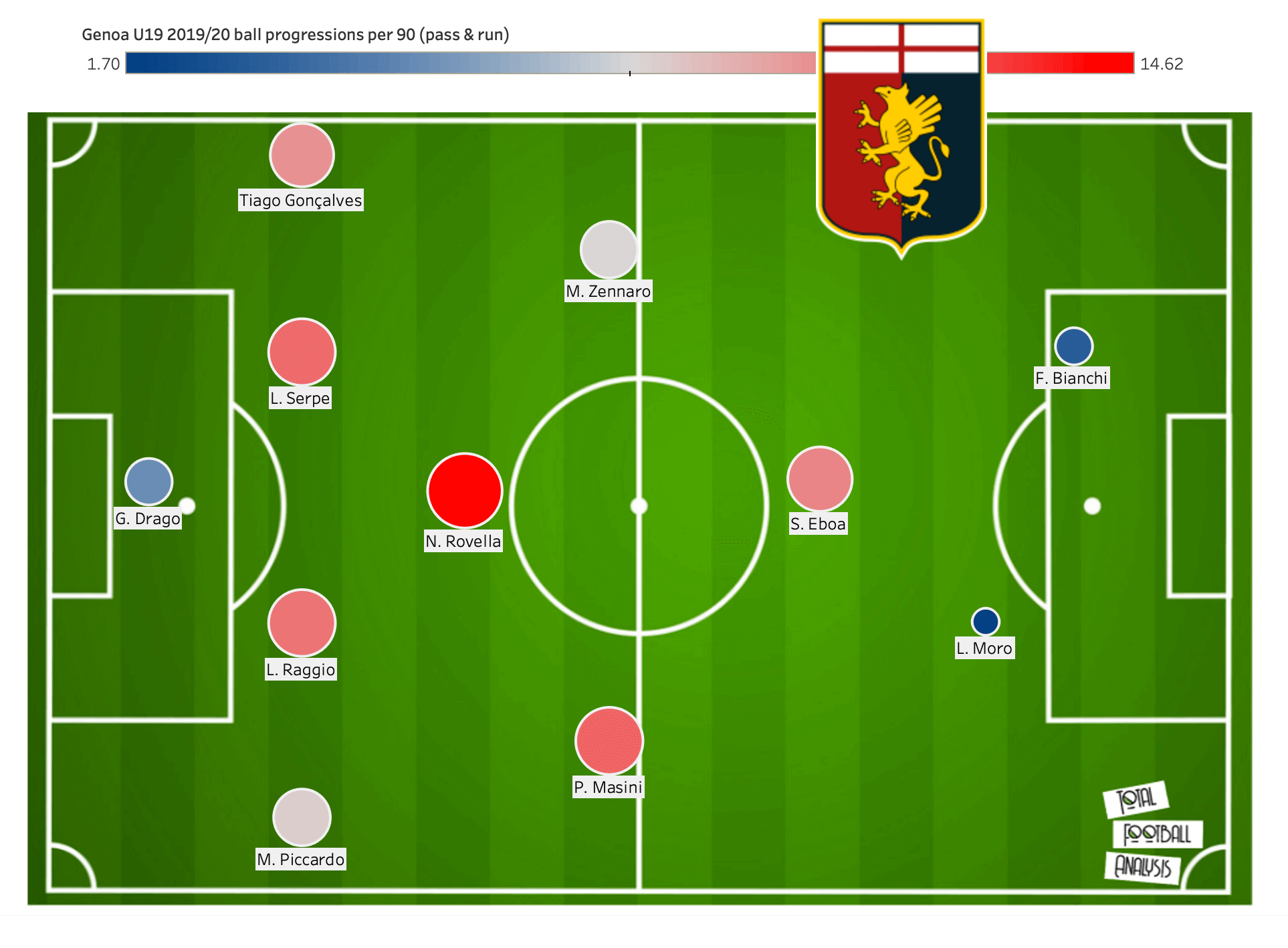 The above data visualisation highlights Rovella’s importance within the Genoa U19 side, it compares individuals’ ball progression (passes and dribbles) per 90 across the regular starting eleven. As you can see, Nicolò has added a significant impact in relation to moving the ball up the field for his team, leading the way with an average of 14.62 progressive actions per 90 this season. This contribution has assisted Genoa to be able to play a large amount of football within 20 metres from the opposition’s goal, Luca Chiappino’s side have the second-highest deep completions per 90 (11.42) in the Campionato Primavera.

In order to compare Nicolò’s ability on the ball to other deep-lying midfielders within the league, we have conducted a data analysis against a sample of individuals who have played more than 500 minutes for their team in 2019/20. The analysis covers three metrics, passes per 90, progressive passes per 90 and Thru passes per 90, as this will help us to compare Rovella to his peers and get a feel for how he operates with the ball at feet. 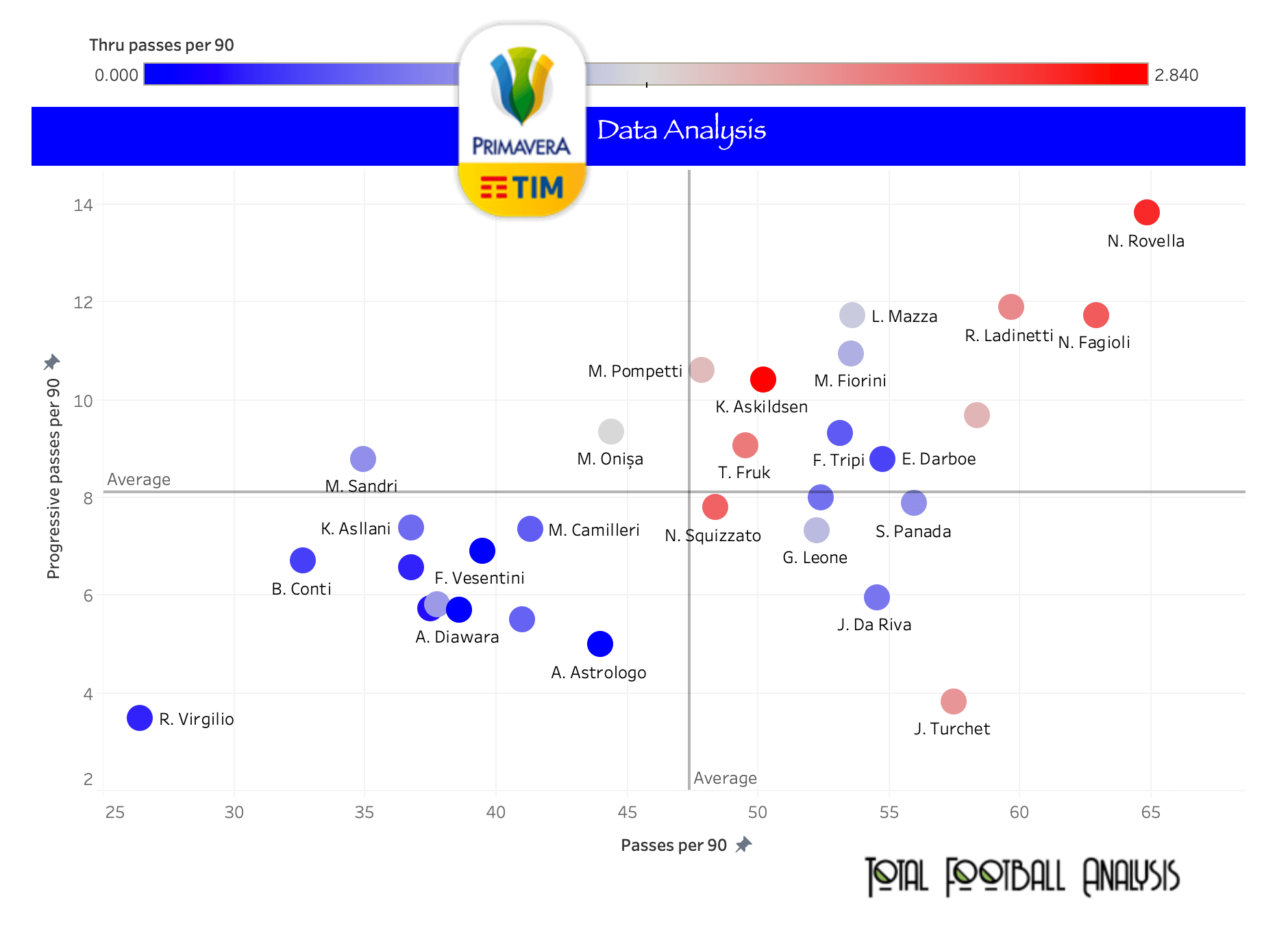 Studying the above data visualisation, you will see that Nicolò leads the way in relation to both metrics, his passes per 90 figure of 64.85 shows just how fundamental he is in relation to keeping Genoa ticking over, pairing this with his leading output of 13.83 progressive passes per 90 the Italian has a significant impact on moving the ball up the pitch. He also has an above-average score of 2.58 in relation to his output of through passes making the midfielder a threat in both transition and building attacks.

A deeper dive into his passing ability through analysis of the above passing rays brings the midfielders passing accuracy to the table. Rovella has a pass accuracy of 85.38% which is extremely impressive, especially when the Italian’s average pass length is 22.85 metres, the third-highest in the Campionato Primavera. 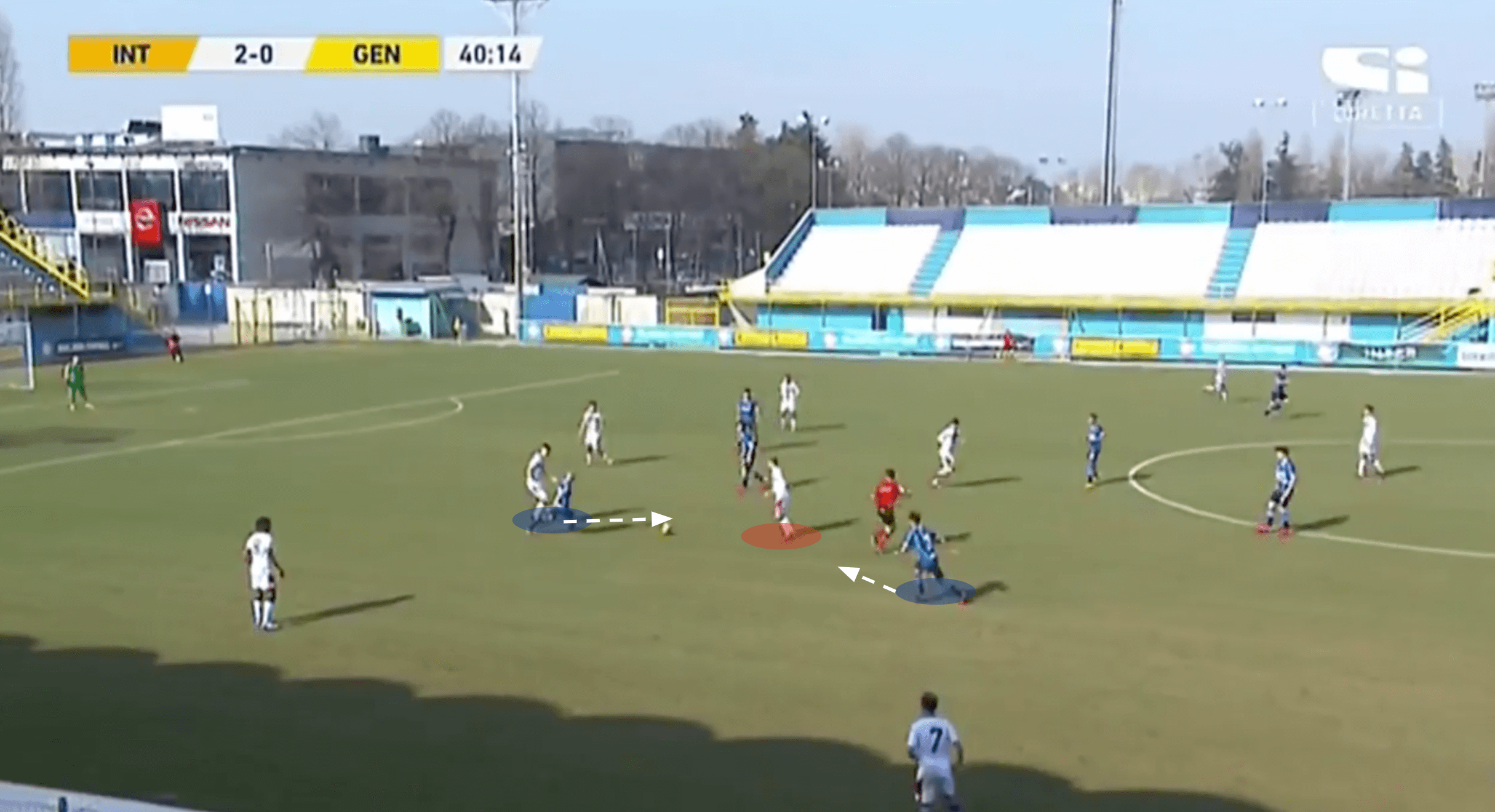 An example of Nicolò Rovella’s passing ability can be seen in the above image against Inter, where Rovella can be seen receiving a pass from Samuele Ruggeri who is looking to build play out from the back. Rovella is under pressure from Lorenzo Pirola, the Inter player opting to press after identifying that Rovella is receiving a ball with his back to play, this being a pressing trigger. 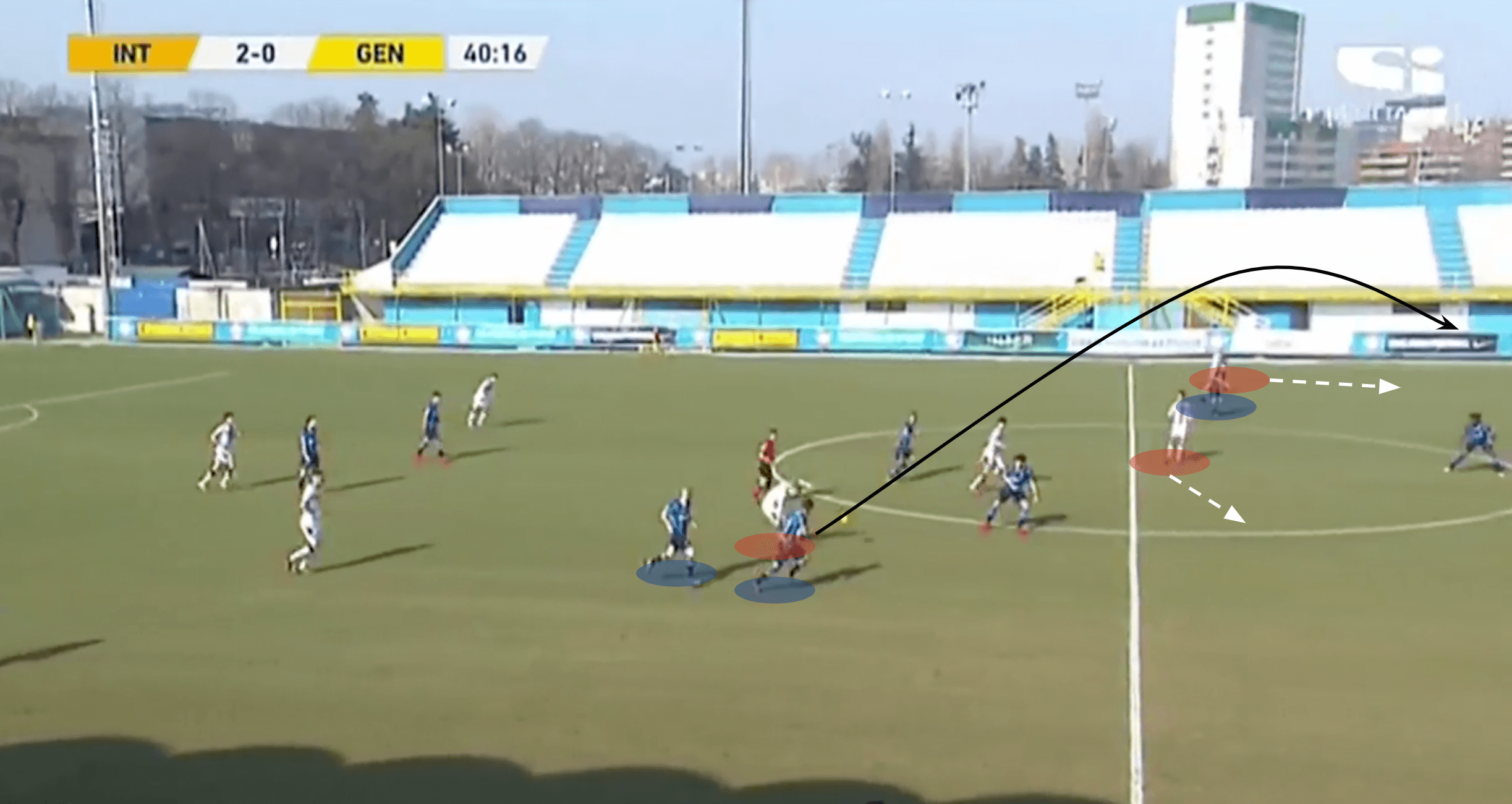 The midfielder’s awareness of his surroundings enable him to shield the ball and then advance into the middle third, all whilst scanning the field of play like a quarterback to find an open player. The midfielder, despite having an easier forward pass into the feet of the forward, opts for a long ball into space for left-back Tiago Goncalves to attack in the vacant space behind Inter’s defensive line. 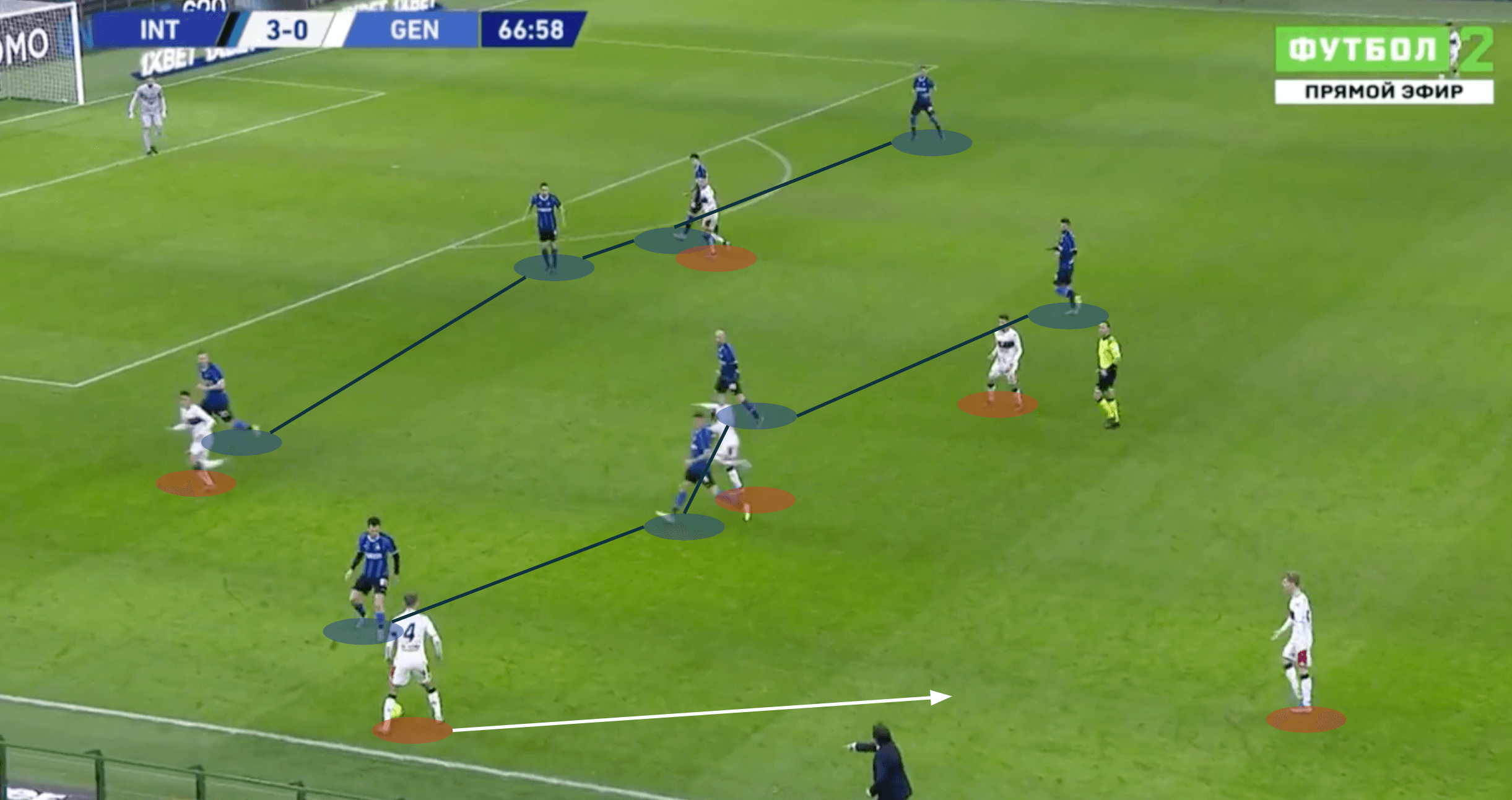 Rovella can also often be found sitting on the edge of the semi-circle in front of the defensive three when his side has the ball in the final third. An example of this can be seen during his Serie A debut at the San Siro, it is here that his simple yet effective play helps to keep Genoa ticking over, by distributing long passes out to either flank helping his side to break down an opponent by creating space as their defensive unit re-adjust their positioning. From this position, he can also play a short ball to a player in the space between the lines if they opt to drop off into space, creating an open passing lane. 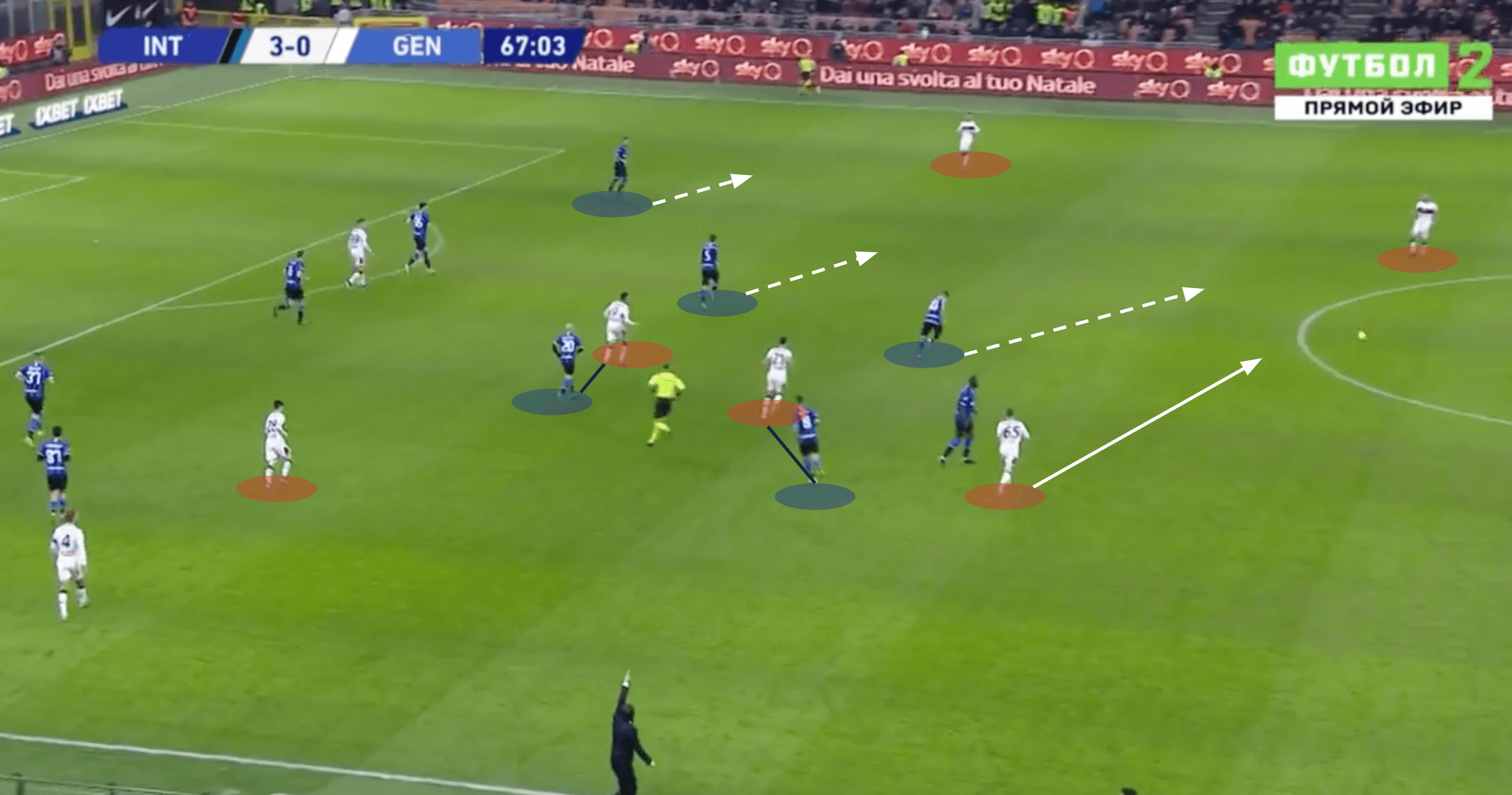 Despite the Italian’s ability to complete a large percentage of box-office passes, the midfielder like most 18-year-olds still has to improve his decision-making. Below against Inter, Rovella has two easy passes available to him, both options would move the ball to the right-hand side of the pitch where Genoa could look to exploit a numerical advantage. Instead, the midfielder played a long ball over the top of the mid-block which gave away possession.

Nicolò Rovella is also exceptionally effective defensively, the Italian often can be found making an impact on the game when Genoa are without possession. In order to compare Rovella’s defensive contribution for Genoa with players in a similar role, I have conducted a data analysis looking at all centre-midfielders who have played over 500 minutes for their clubs. This analysis compares successful defensive actions per 90 and pass-adjusted interceptions (PAdj Interceptions) two key metrics in relation to the defensive side of the game when operating in the midfield. 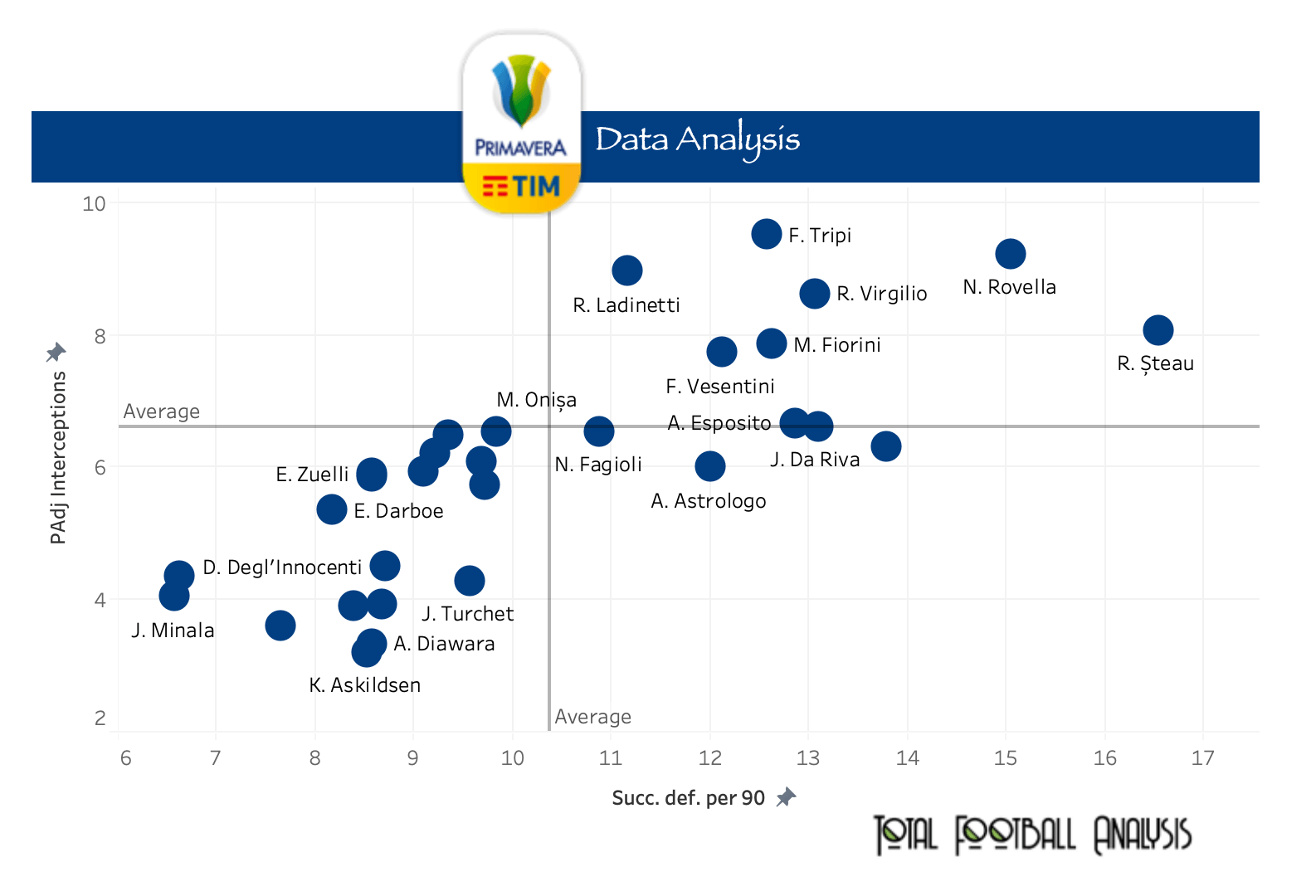 After conducting analysis into the above data visualisation, you will see that Nicolò is performing way above average in relation to both metrics, his successful defensive actions per 90 of 15.05 is not a common trait of a deep-lying playmaker, who are often not renowned for their defensive skills. The Italian is also extremely adept in making interceptions, crediting his high-energy levels and competitive nature – it is these two areas of his game which really set Rovella apart from a large number of midfielders at Primavera level. 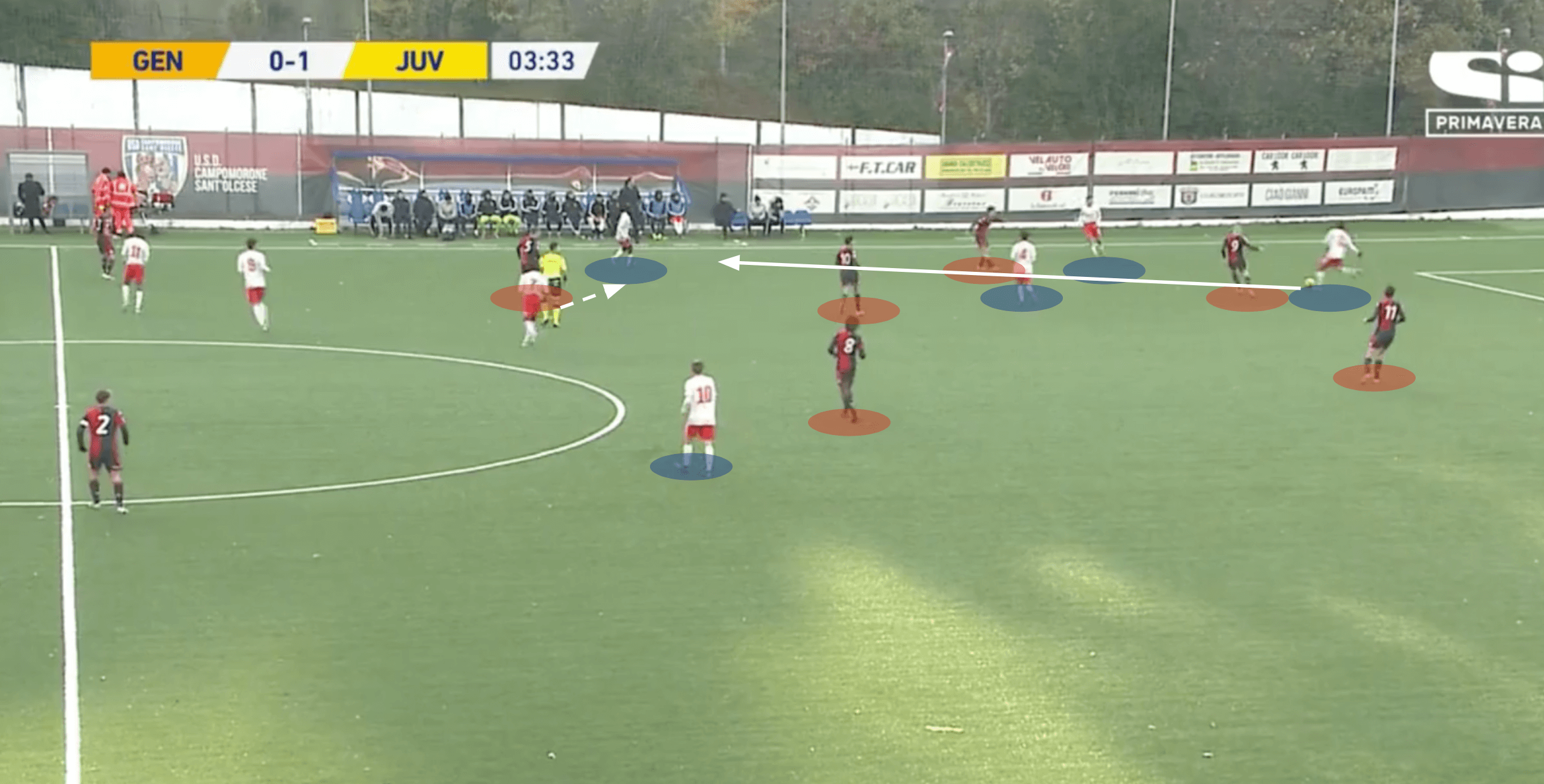 An example of Nicolò’s awareness in the defensive phase can be seen above against Juventus, defender Paolo Gozzi Iweru plays an acute progressive pass to teammate Naouirou Ahamada who has found a pocket of space in the wide channel. Identifying the threat, Nicolò decides to leave his familiar space in front of his defence. 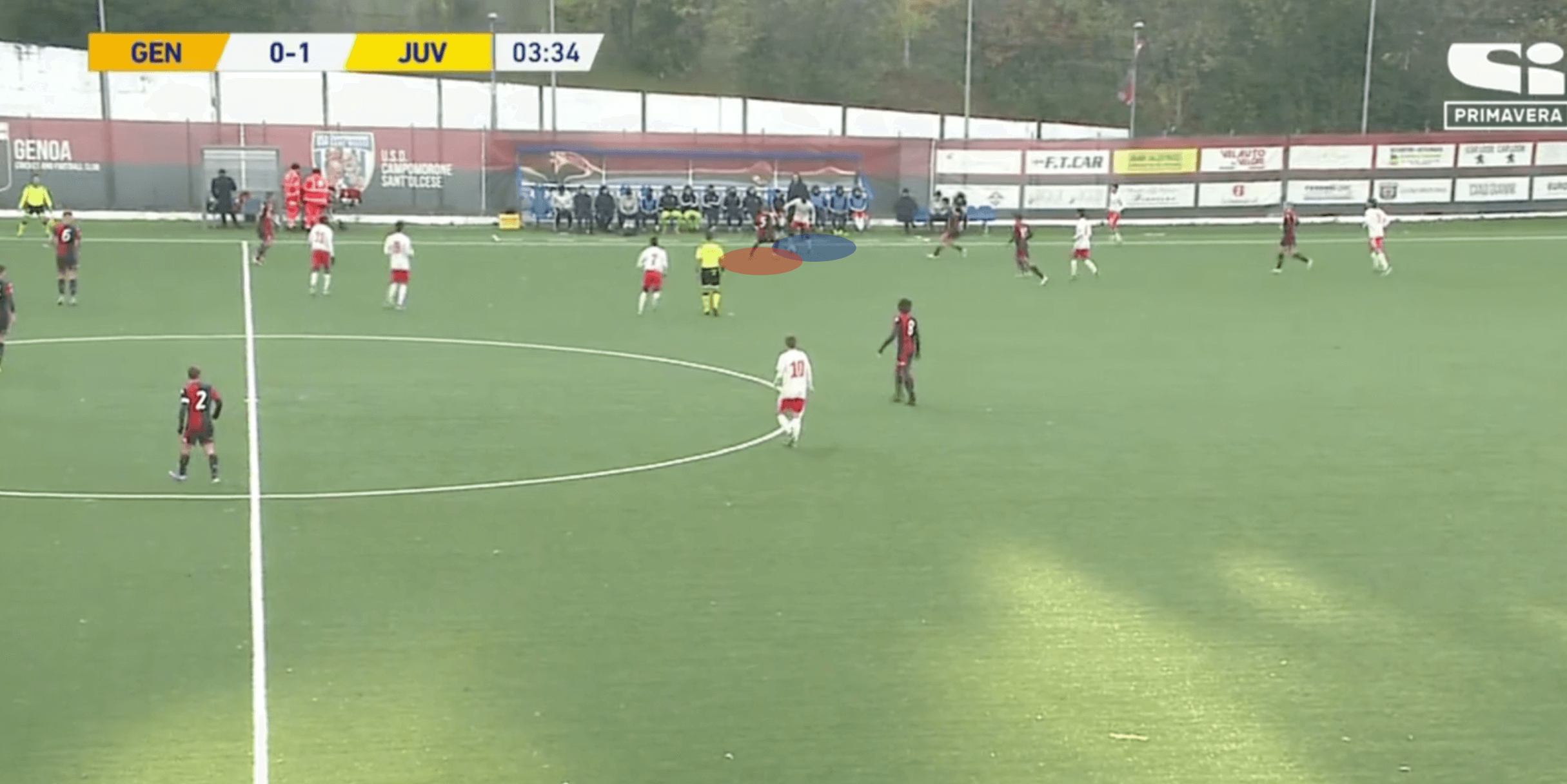 Nicolò’s ability to identify the threat and apply pressure on the receiver, lead to the midfielder making a tackle with the ball going out of play for a throw-in. This allowed Genoa the opportunity to regroup and form their defensive structure, making them harder to break down.

The positioning when Genoa are on the attack means that Rovella also acts as additional cover for his centre-backs, an example of how Rovella helps counter the threat of the opposition on the break can be analysed below against Cagliari. 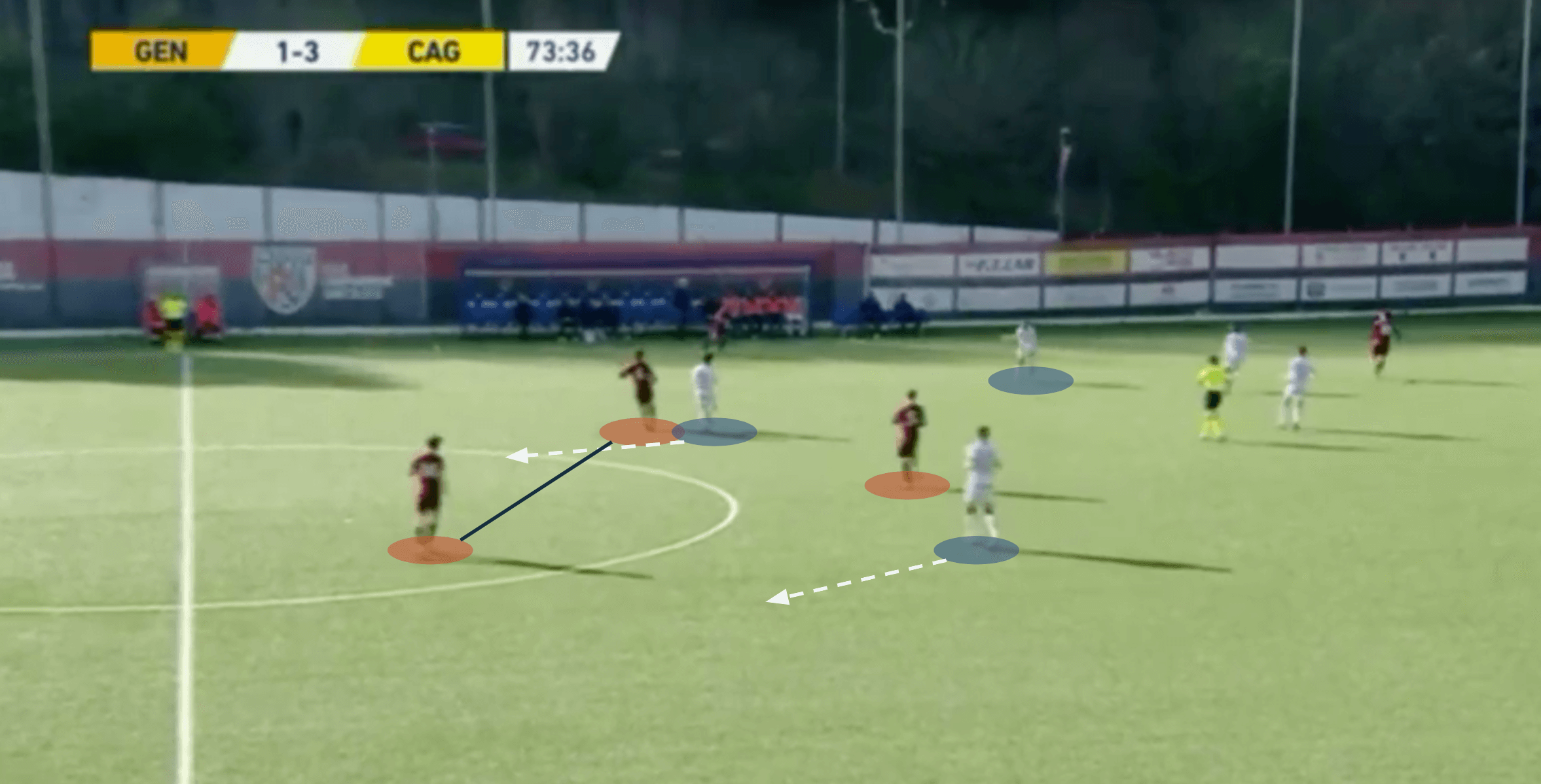 Genoa have just given the ball away through a loose pass from defender Leonardo Raggio, springing Cagliari into a counter-attack. Note Rovella’s positioning on the cusp of the midfield third.

As the play advances Rovella tracks back, blocking the passing lane to the forward on the near side, making the progressive pass harder to make. His positioning also has made the attack a 3 v 3 rather than Cagliari having an overload, and as play advanced Rovella intercepted the pass, returning a sense of calm into the Genoa team.

Nicolò Rovella is certainly a player that is worth keeping a close eye on, I have no doubt that the Italian will benefit from increased exposure to the first team due to the COVID pandemic and the packed schedule as Serie A returns.

The midfielder has shown he possesses a great deal of star quality playing for the U19’s, it will be interesting to see how the Italian continues to develop and perform. Genoa have one of the youngest squads in Serie A with an average age of 26.3 years, meaning the likelihood of him securing the all-important game time is positive.

Rovella certainly has the credentials to become one of the household names in Italian football, and he is certainly a player who is worth tracking to monitor his developments.