Nemanja Glavcic is a Serbian central midfielder who plays for 1.HNL side NK Slaven Belupo. This scout report will contain a tactical analysis of Glavčić attributes and his playing style. He has collected a total of 59 caps for the Serbian U16, U17, U18 and U19 national teams, and could well be in line for a senior call-up soon if he can continue his performances.

Glavčić has captained the Serbian U19 team, which included the likes of Luka Jović, the Real Madrid forward who is now on loan at Bundesliga side Eintracht Frankfurt, as well as Nikola Milenković who now plays for Serie A side Fiorentina. However, after a very successful youth career, he faced difficulties when trying to break into the Partizan senior team where he never got a real opportunity and was therefore loaned out to Spartak Subotica where he played for three seasons before moving to Slaven Belupo. In this analysis, we will look at his qualities and why he is having a breakout season.

Nemanja Glavčić is a 24-year-old who plays as a central midfielder. Transfermarkt values him at €850k. He is 5’8″ tall and is predominantly left-footed. Slaven Belupo usually play in a 3-5-2 formation where Glavčić plays as the left-sided central midfielder. He is an attacking midfielder, playing as a ‘number 8’, and is therefore responsible for creating attacking opportunities from midfield in that system.  Glavčić has been a key player for his team this season and has been a consistent performer thus far. He is a dead ball specialist and often delivers dangerous crosses into the penalty area, but also can threaten the goal directly from free-kicks. 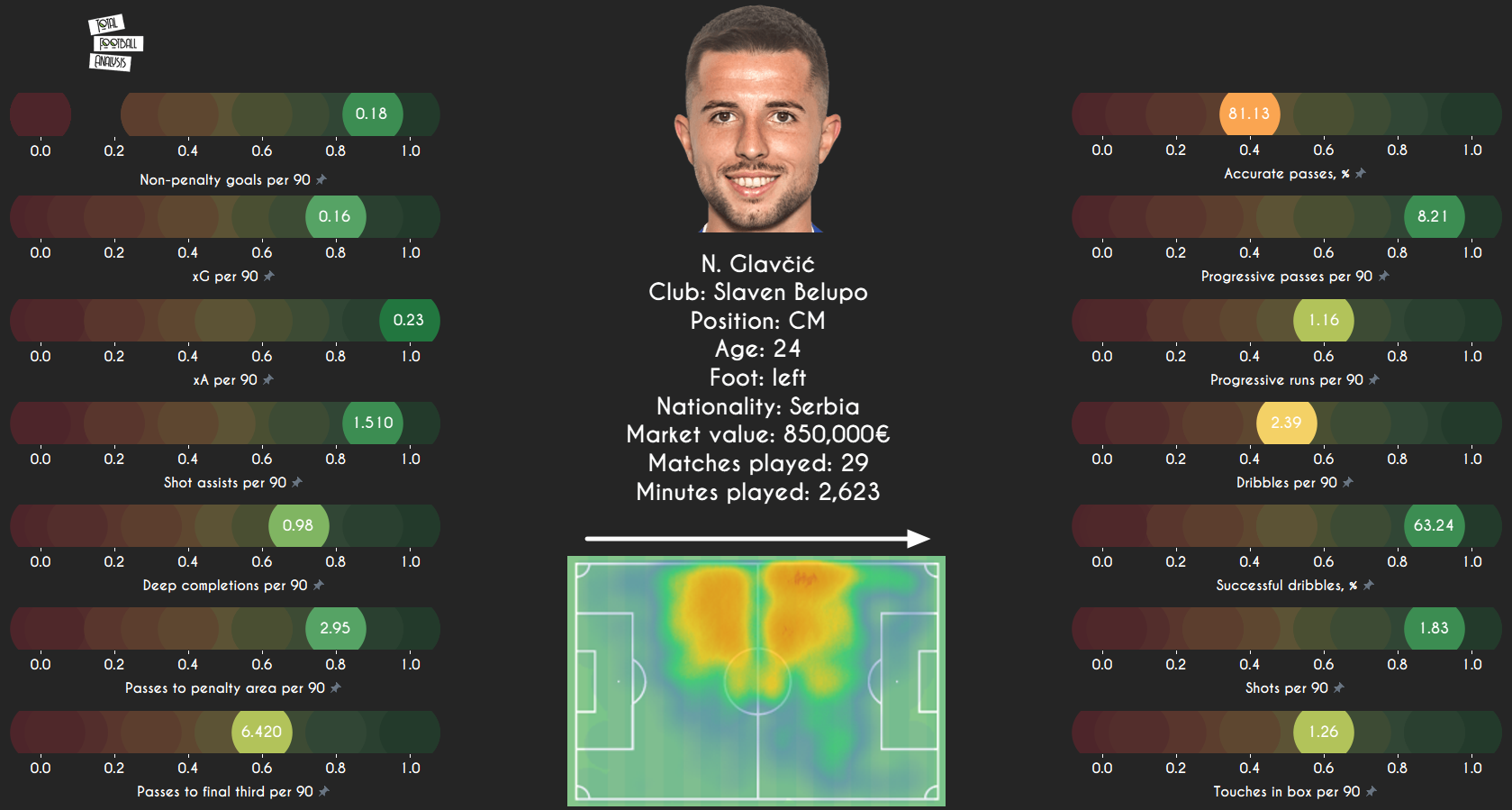 In the image above we can see how Glavčić looks compared to the other midfielders in 1.HNL who played at least 600 minutes. We can see on his heatmap how he occupies a lot of the left half-space and that he often drifts wide.  Based on data it is clear that Glavčić is one of the most creative players in the league. His xA per 90 is the best amongst the midfielders. Glavčić is a very good progressor of the ball, especially through passing. Not only that he is very creative but also he shows he is dangerous with 0.16 xG per 90 which is among the best compared to the midfielders and also he shoots 1.83 times per 90. Even though he isn’t the fastest player he is technically very good and he shows very good dribbling skills with 63.24% of his dribbling attempts being successful. He could improve his touches in the box which could lead to more chances for him to score goals.

Making an impact in offensive transition

In this section, we will show how Glavčić makes an impact for the Tomislav Stipić team in transition. Slaven Belupo is the team that wants to take advantage in offensive transition and Glavčić is the centrepiece in that system because he can contribute in three different ways because of his qualities. 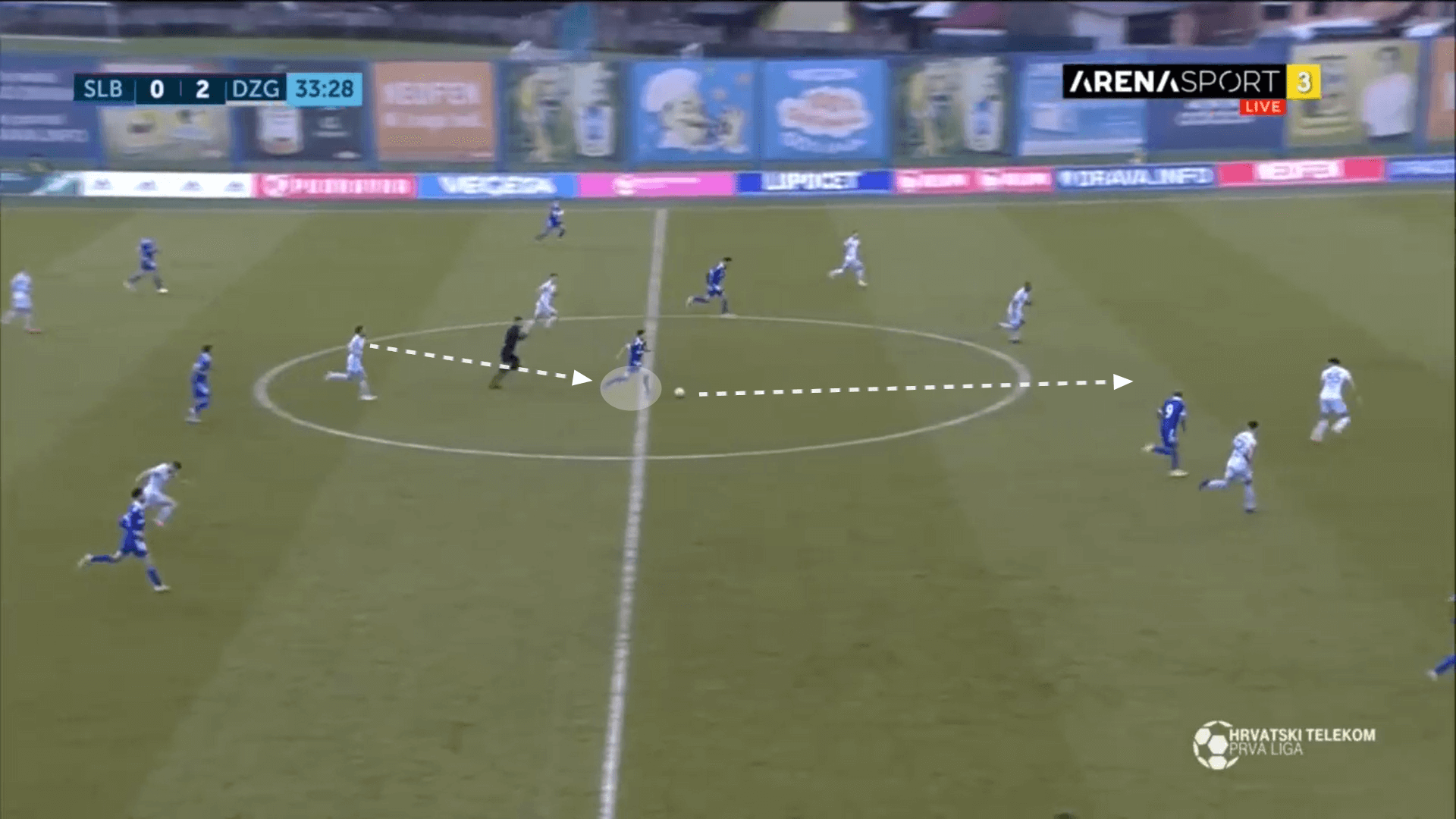 In this situation, we can see Glavčić leading the counter-attack. Even though he isn’t the fastest player his spatial awareness helps him to create space for himself and receive the ball unmarked when anticipating offensive transition. This way he can carry the ball into the opposition half before playing the ball towards the teammates in advanced areas. We will later talk about his passing in more detail, but it is important to say that his passes in situations like this are most of the time very good timed and weighed. 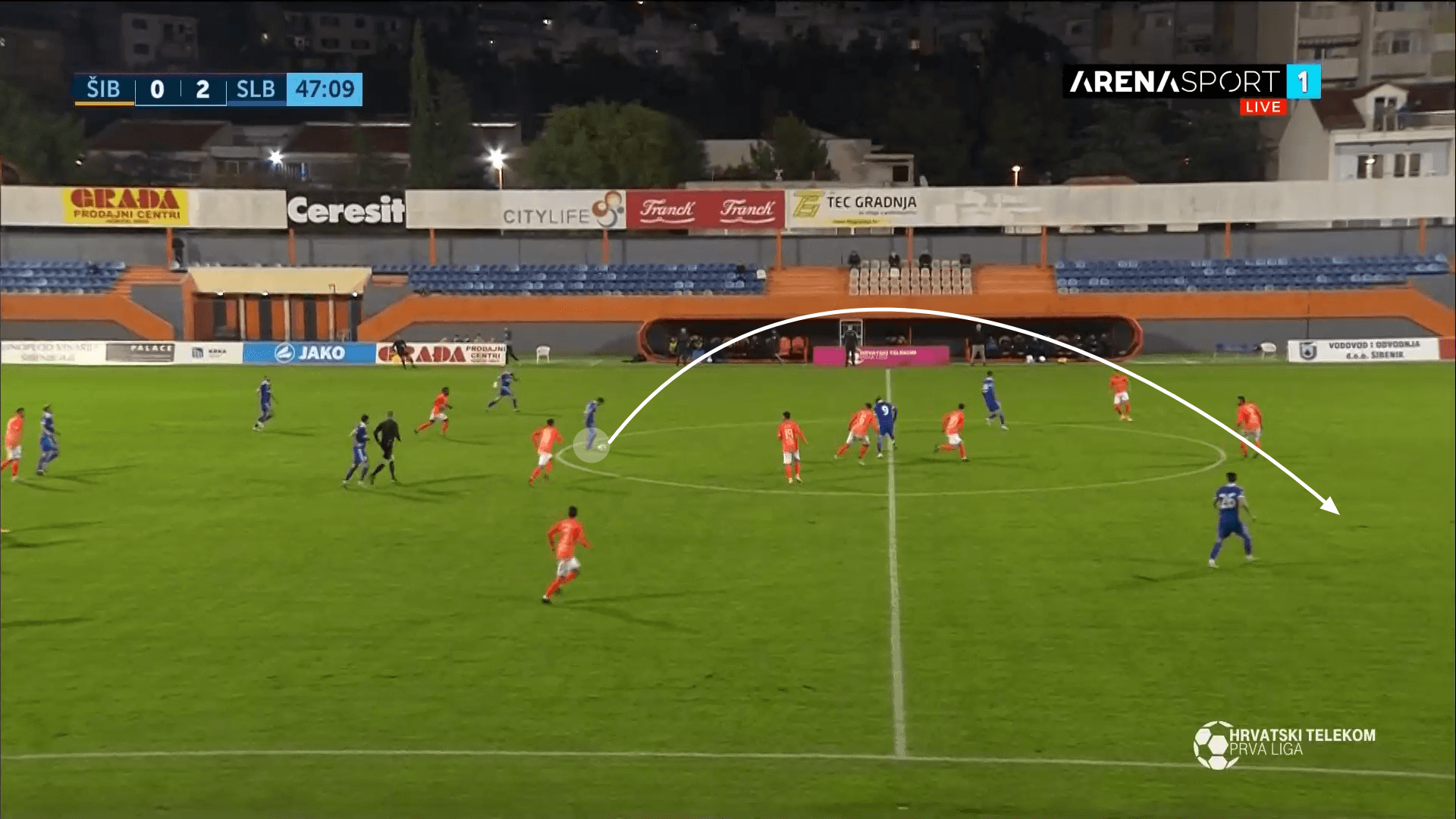 After looking at how Glavčić can make an impact as a ball carrier in transition we will now see his impact at starting dangerous attacks as a passer. We can see in this situation in a match against Šibenik that he is not under pressure and has enough time and space to choose the right action. As we already mentioned his movement between the lines and positioning allows him that time and space. He picked up deflected ball and made a first touch pass towards Lulić(#26) who had a lot of space in front of him, putting him in a good goal opportunity. With this type of play, we can highlight Glavčić quick thinking, high football IQ and technique to put the ball into space from where his teammates can threaten the goal. 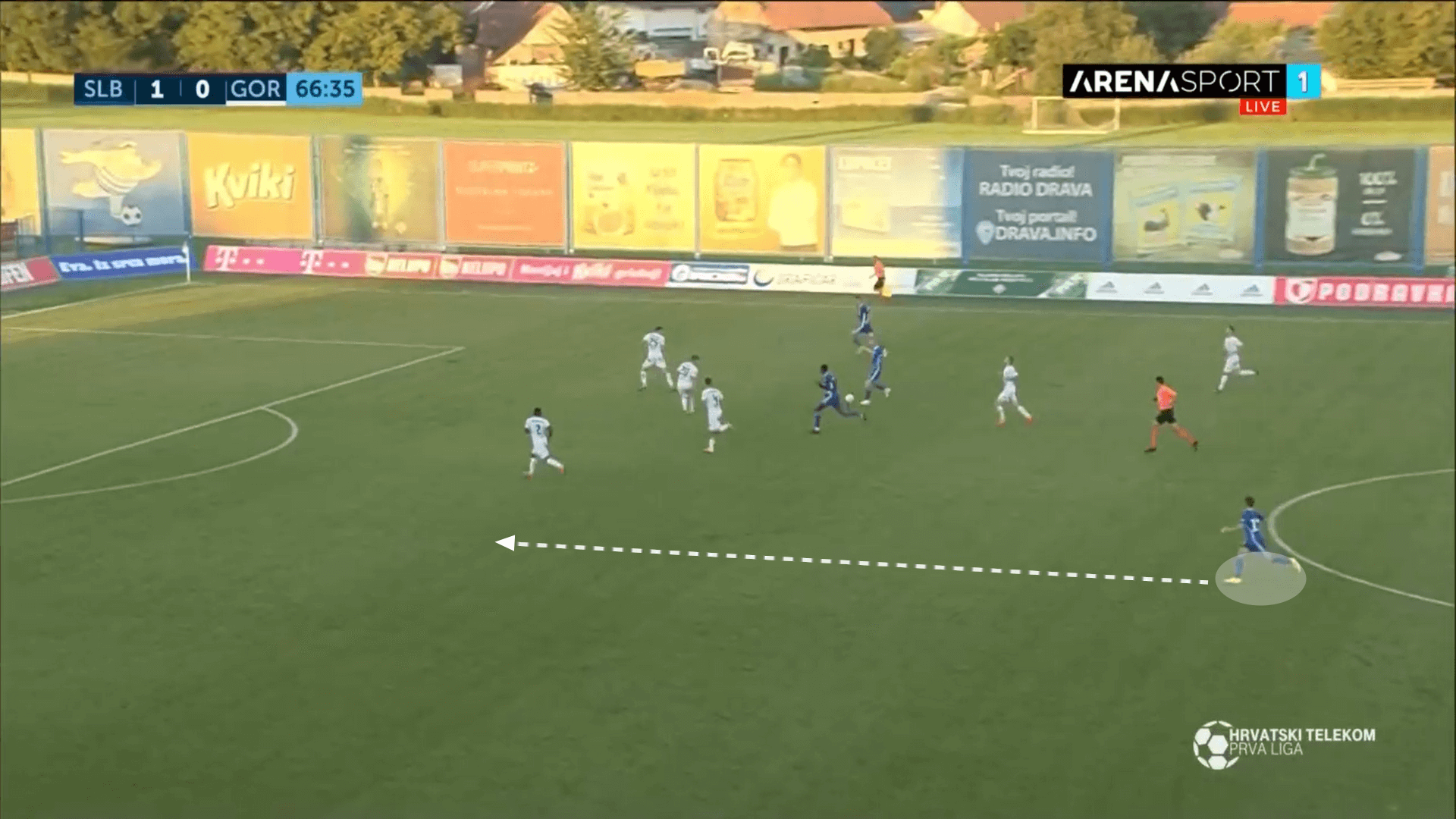 The last situation in this section is Glavčić off the ball offensive transition. There are situations when his team regain possession on the right side or higher on the pitch which then prevents him from leading the counter-attack, but he works on getting into the final third and mostly arrives a little later with timed runs which allows him to receive the ball into his feet. Late arrival is key for him because then he can receive the ball with defence in front of him and few teammates making the runs trying to exploit space left behind the defence. There is no better player in the Slaven Belupo team that you would want to make that final pass and find the right solution in those kinds of situations. If he was too close to the opponents’ defence in transition then he would be pressed quickly or he would get the through ball which is not what he prefers given his limited pace.

Glavčić is one of the most creative players in the league and surely the creative force for Slaven Belupo. He creates a lot of chances from set-pieces with crosses both from corners and indirect free kicks. Last season he was amongst the best creators, especially from set-pieces, but his teammates finishing let him down and unfortunately, he only had one assist which was not his fault. However, currently, he is already on seven assists and he could reach double digits in assists till the end of the season. In this section, we will take a look at how he creates chances from open-play and his positioning in the attack. 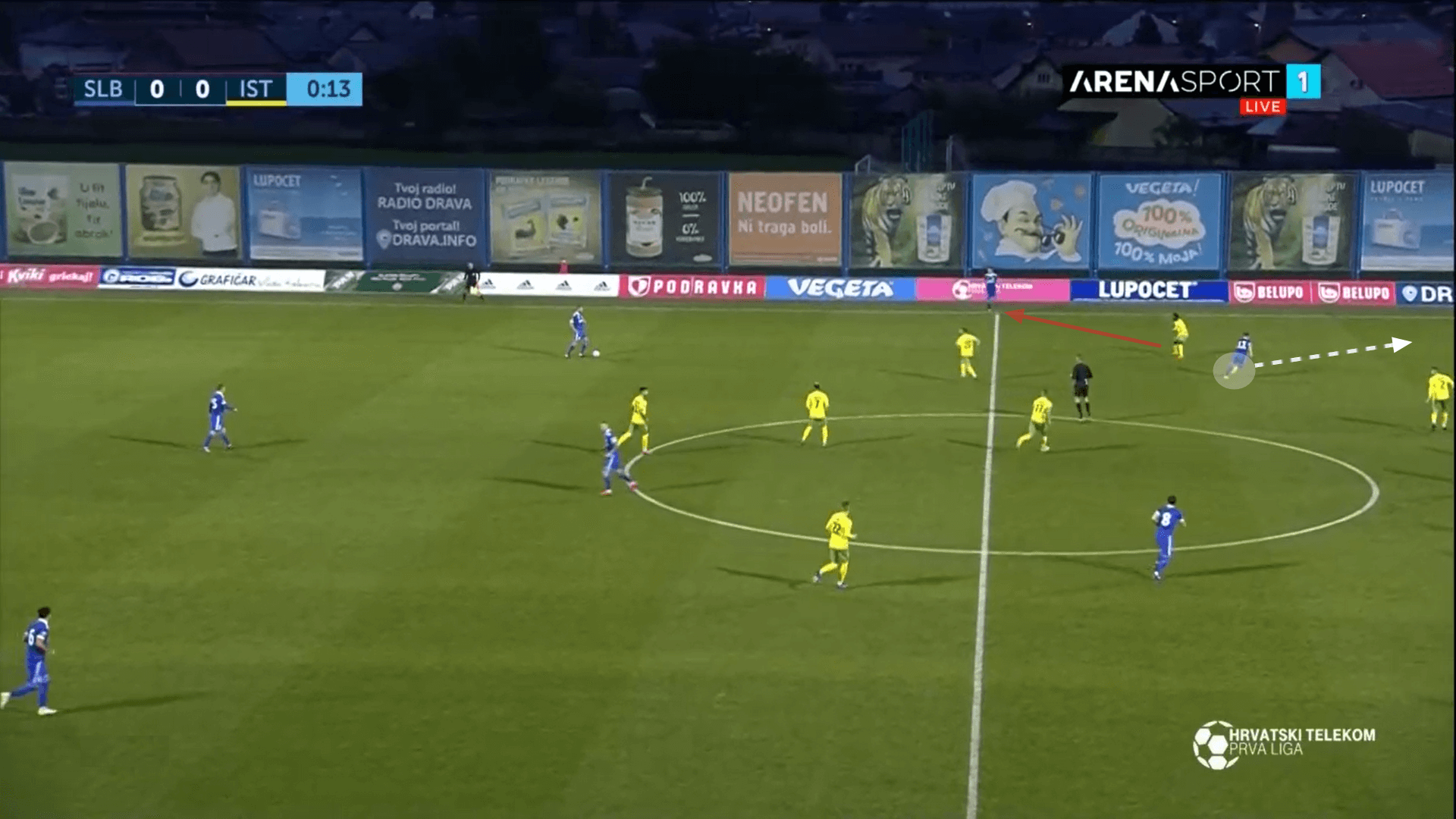 In 3-5-2 formation, Glavčić is left central midfielder with more offensive freedom or to rephrase it more accurately less defensive responsibilities than his most common midfield partners Stipe Bačelić-Grgić and Karlo Lulić. Bačelić-Grgić plays mostly as a holding midfielder while Lulić is a box-to-box midfielder who works a lot and covers a lot of space. In the example above we can see one of the reasons why Glavčić’s heatmap shows high action frequency on the left side. Slaven Belupo formation allows Glavčić to drift wide to receive the ball because there is often free space when opponents mark left wing-back closely. From these areas, Glavčić tries then to cut inside and create space for overlapping wing-back while always looking to pass towards the centre-forwards. Glavčić often fakes opponents by playing vertical passes with the outside of his left foot towards the centre-forward and then continues his run toward the central area where he can receive the ball back. 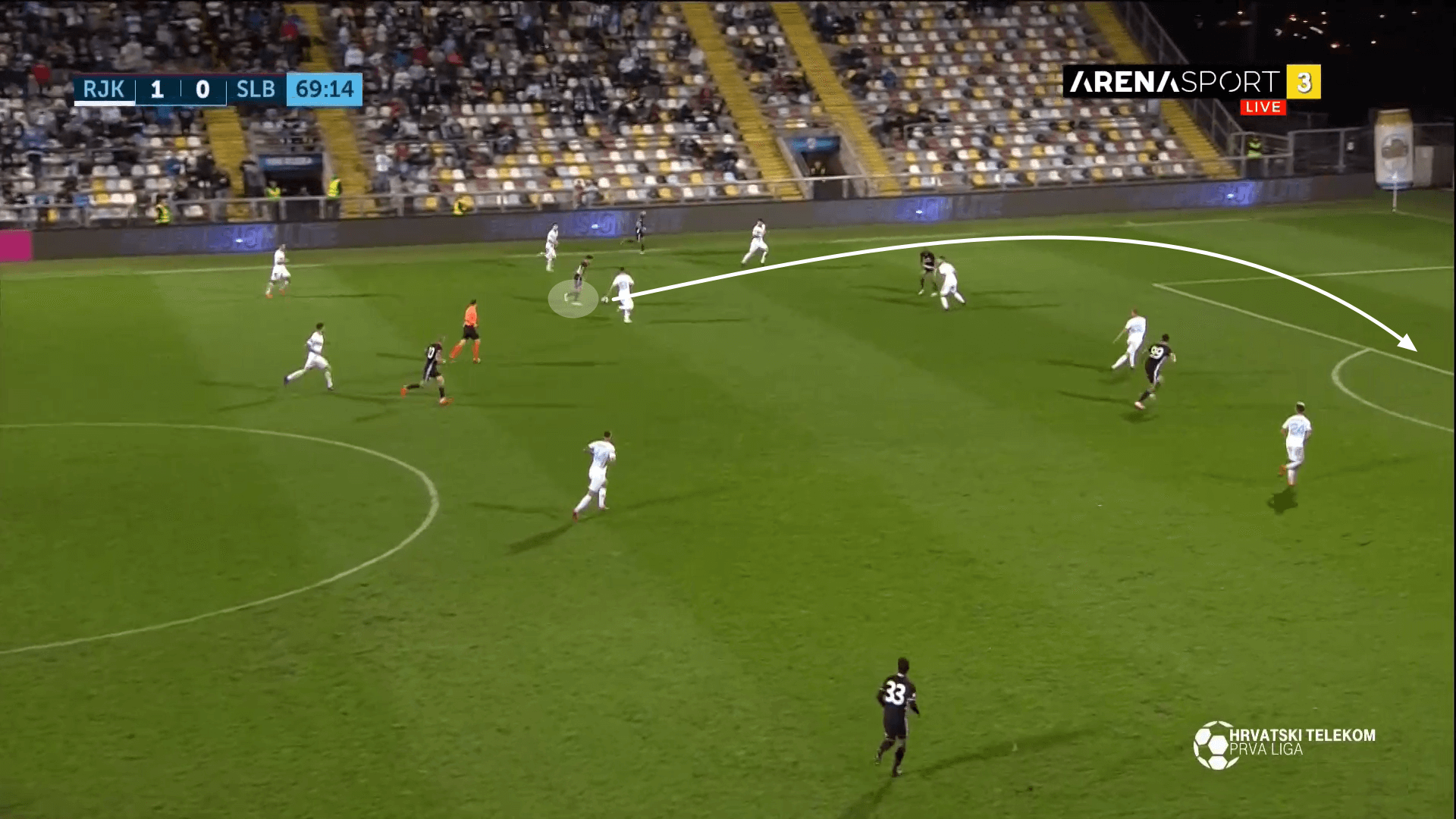 This situation shows Glavčić’s ability to deliver the ball from the left half-space. Each of my analysis highlights this ability as something which many clubs are looking at when scouting central midfielders. This is becoming more and more frequent especially with teams that play without wingers and need central midfielders who are able to drift wide, cross and make 2v1 situations with wing-backs. Glavčić is surely one of the central midfielders who can do all of that which reflects on his output and why he is in demand. His off the ball movement can lead to a lot of these situations, given the right timing he has to arrive into halfspace. The crossing is one of his strengths and he is capable of aiming both the space in front of his teammates or directly teammates if there is no space in front of them. 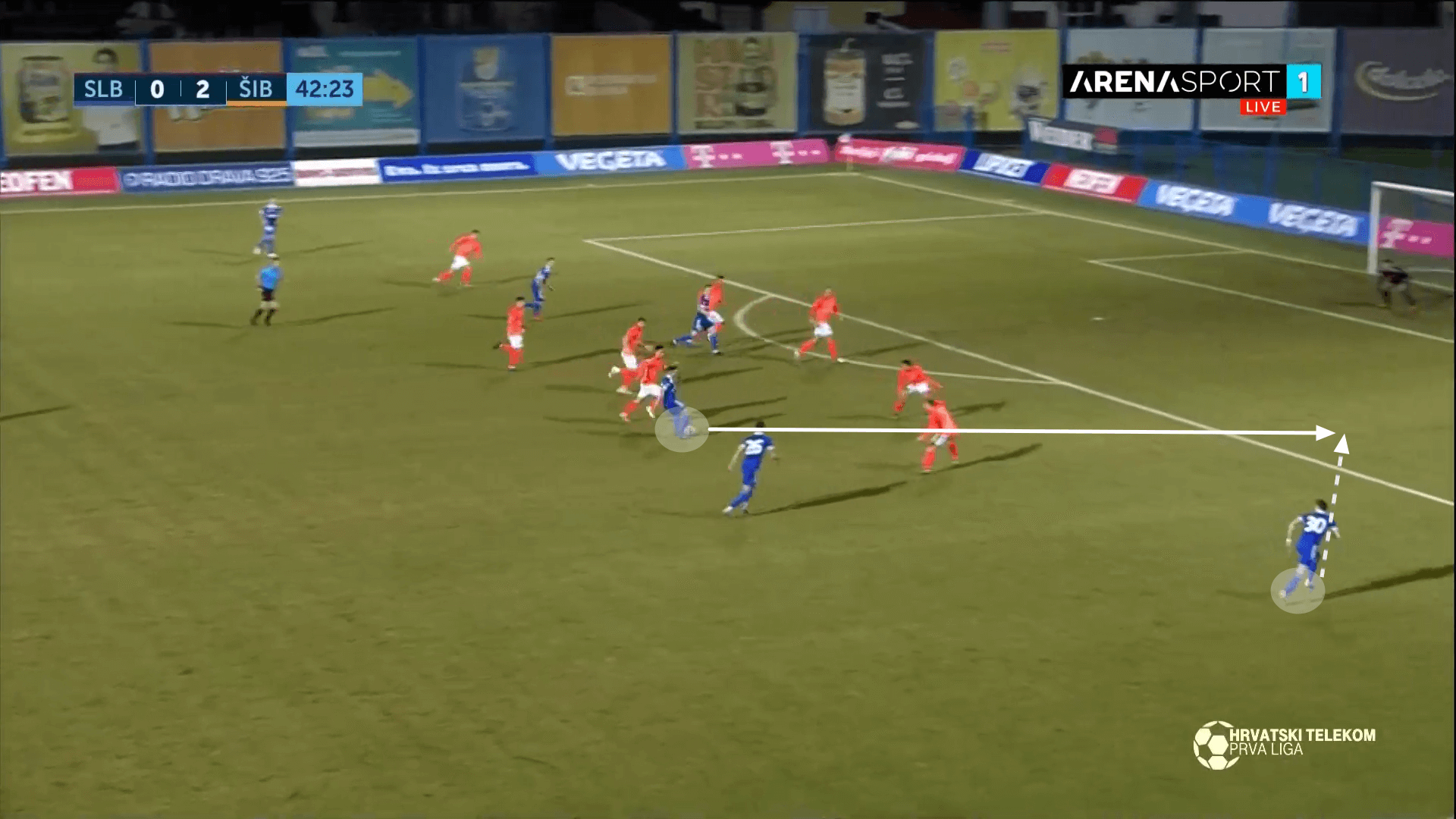 Glavčić is capable of breaking the opponents’ defence with through passes. He keeps his coolness in those situations even when he is under pressure. In the situation above we can see him passing the ball between opponent defenders for wing-back who runs into open space behind them. Most of those situations end as a key pass or second assist if the chance is converted. He mostly targets wing-backs who often have more space to receive the ball and then attempt cross or cutback pass. 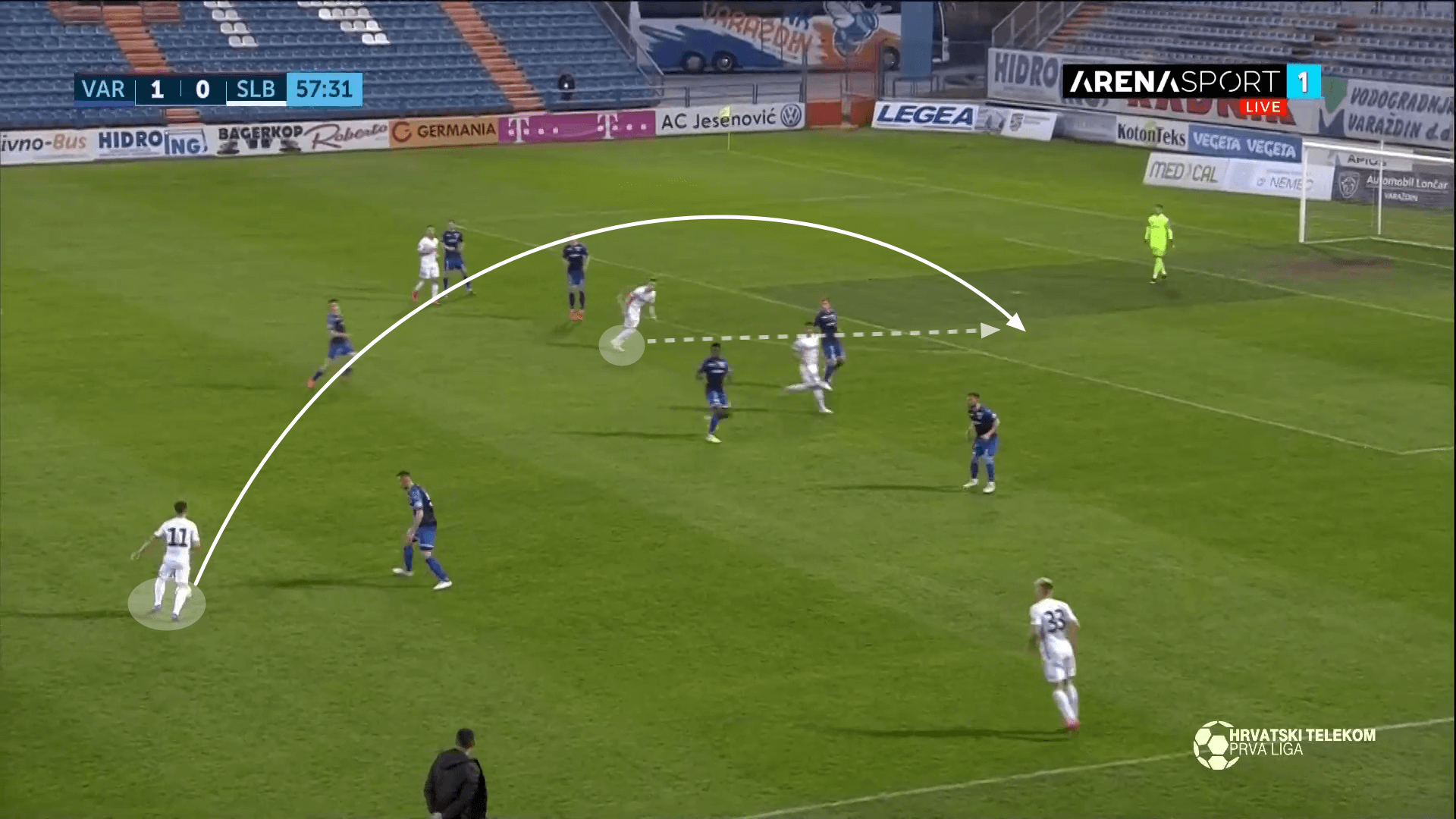 The last example in this section highlights his vision, timing of the pass and passing range. It is not rare to see this from Glavčić, he is mostly on the left side from where he can make diagonal passes into the open space, but it is more natural for him to hit these chipped passes over the defence from right halfspace. This example gives us the insight that Glavčić has his creativity arsenal no matter where he finds himself on the pitch whether it is right, left or centre area. 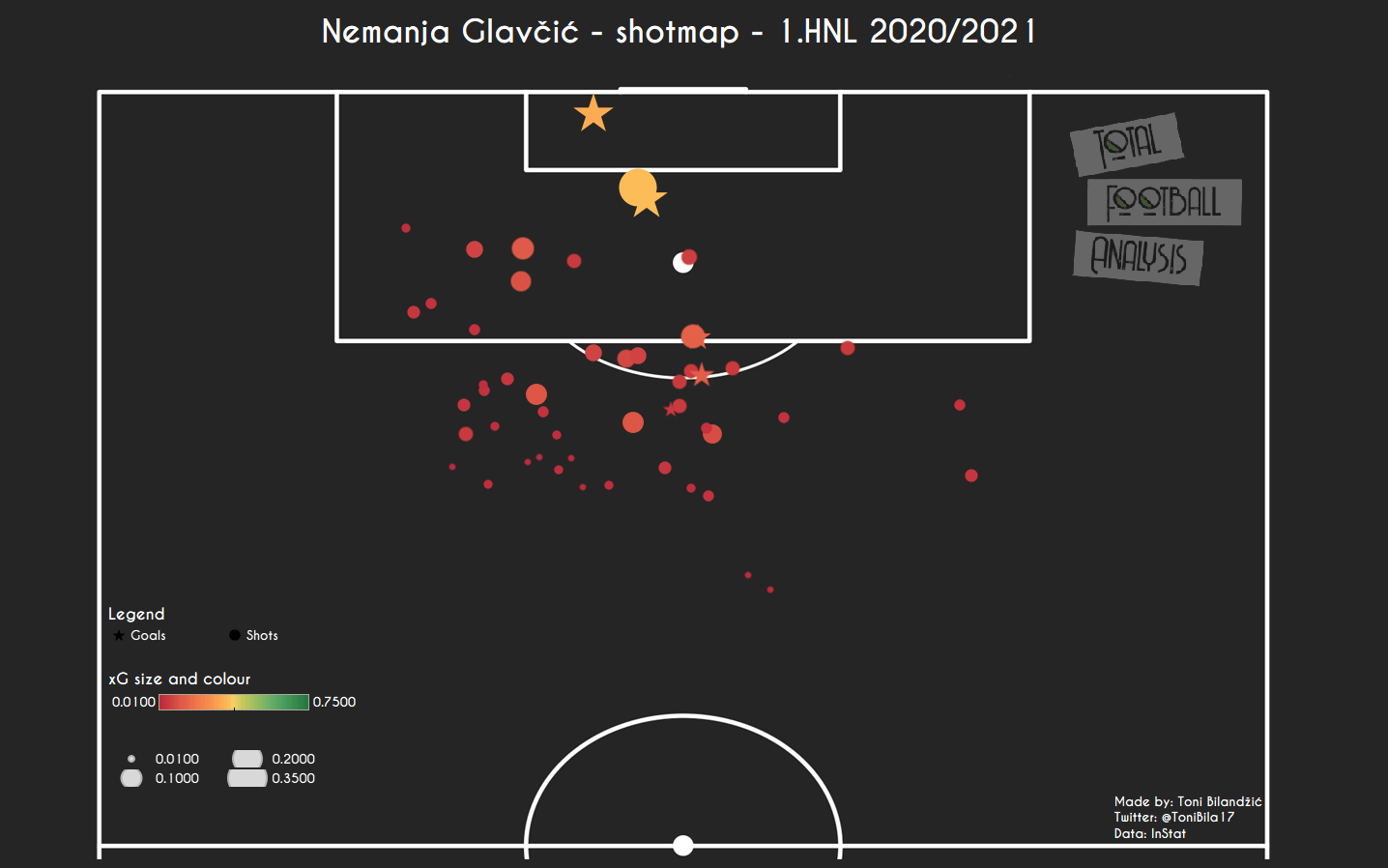 Compensates the lack of physicality with positioning in the defensive phase

Glavčić didn’t make instant progress in the transition from youth to senior football because of his physical capabilities. He is not a slow player, but he is not the fastest one. His small frame and lack of physical strength made it difficult for him to make a bigger impact in senior football and replicate his performances from his youth career. Through time he managed to adapt and work smarter not harder which is the biggest reason why we see him having a breakthrough season. It isn’t that he doesn’t work hard now, but he is now positioning more maturely and doesn’t exploit himself much on bigger space. This is easiest to see in his actions in the defensive phase. 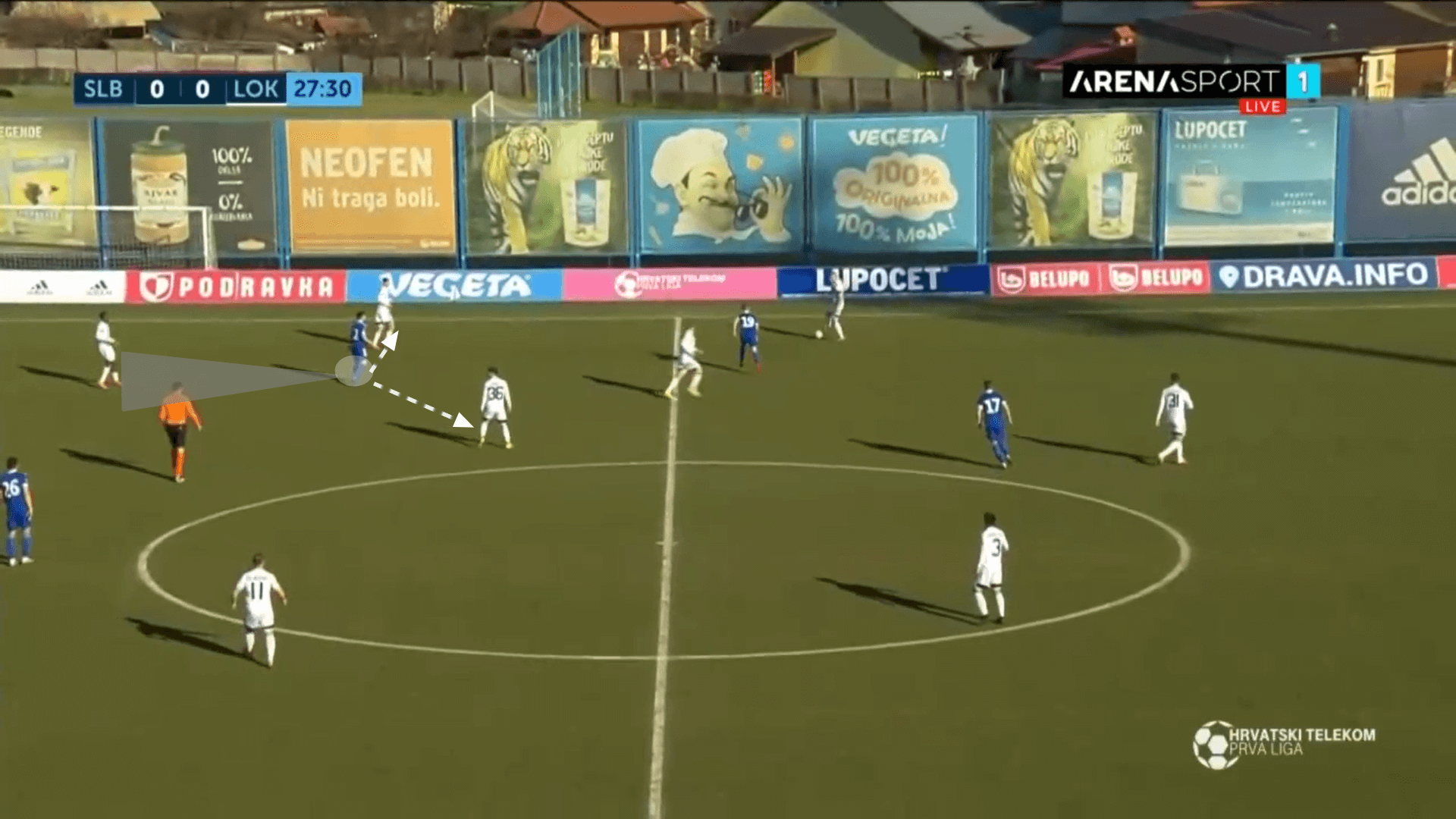 In the example above we can see Glavčić smart positioning. He is closer to the opponent who is looking to receive the ball wide but doesn’t engage too much because he is aware of the player behind him. Putting the player behind him in the shadow and closing the passing lane is most important in this situation, if he doesn’t do that opponents will easily enter their final third. If a player on the side receives the ball he is close enough to put pressure on him and prevent him from progressing further down the pitch. At last, he is also putting control onto the central midfielder(#36) and positions himself just enough to keep an eye on his movements to be ready, closing him down if needed. 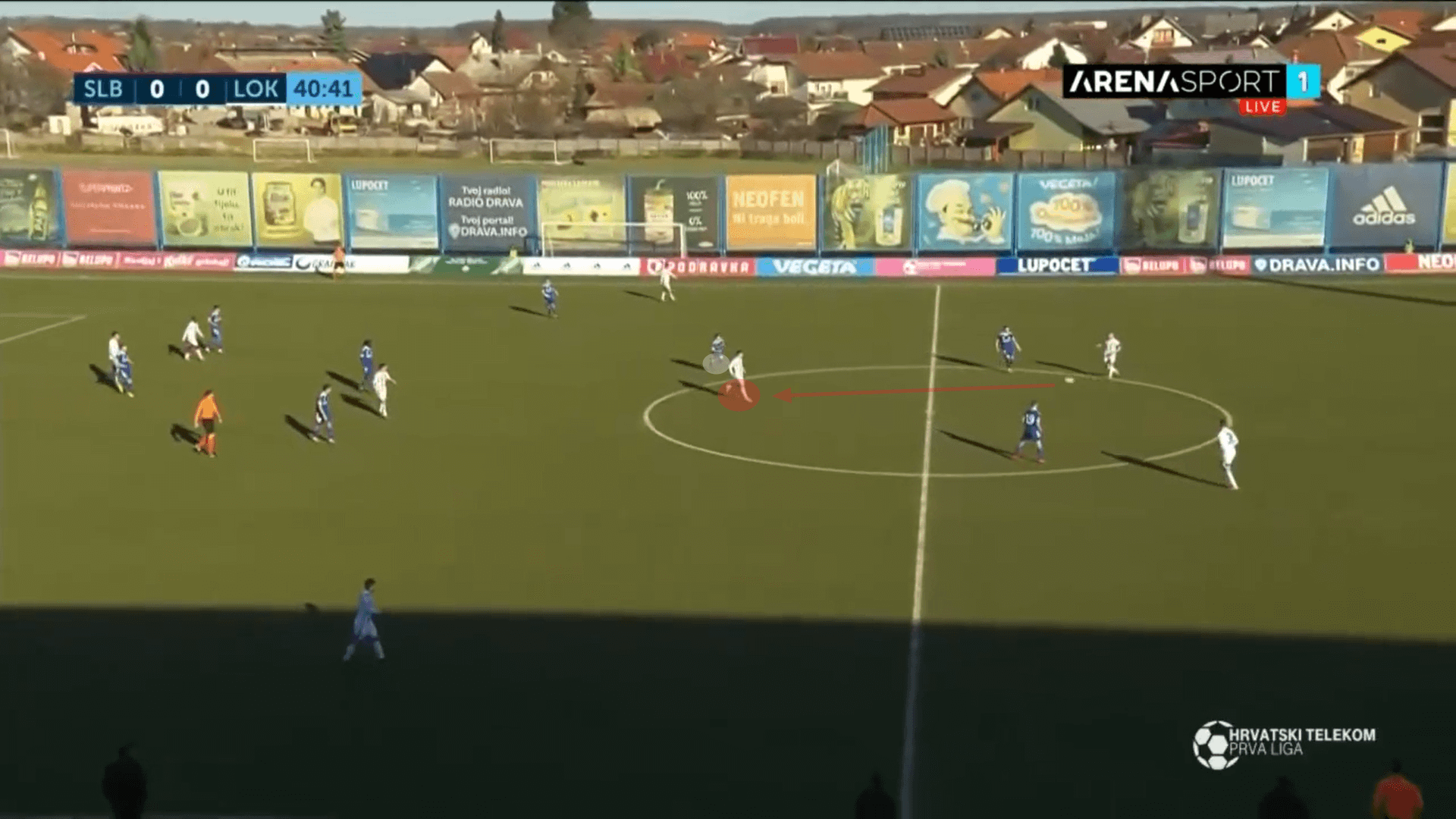 The situation above shows a very good reading of the game and timing to press the opponent from behind. At the moment centre-back passed the ball towards the midfielder Glavčić accelerated towards him to press him on his first touch. The right timing was crucial and Glavčić managed to dispossess the opponent in this situation creating a 3v2 situation. Even though he isn’t most intense in pressure, he is smart enough to make his pressures count.

This analysis gave us information on Glavčić abilities and his impact on his team performance. His path wasn’t easy, most players would lose head after so many appearances for youth national teams and then never getting a real chance in the club where he grew up which just shows mental strength. Glavčić is reaching his peak age and his transfer in the summer is imminent with already clubs standing in the line for his services with reports. His transfer could reach the fee Slaven Belupo received from Glasgow Rangers for Nikola Katić in the summer of 2018.