It’s February and that means it’s been three years since Marcus Rashford burst onto the scene at Manchester United. Since then, Rashford has made more than 150 appearances for United, gone to Euro 2016 and the 2018 World Cup with England and has won the FA Cup, the League Cup and the Europa League with United.

Still, the current moment is Rashford’s first real spell as United’s main man in attack. It’s safe to say he’s relishing it and he’s undoubtedly delivering. This tactical analysis will look at Rashford’s role at United, his potential and the statistics behind his huge improvement.

Rashford was given his chance up front and kept that position during the last few months under Louis van Gaal. Under Jose Mourinho, however, Rashford was shoved out wide whenever Zlatan Ibrahimovic or Romelu Lukaku were fit. For Mourinho, Rashford just wasn’t the striker the Portuguese wanted in his team.

Ole Gunnar Solskjaer instantly made Rashford his main man up front with Jesse Lingard to the right and Anthony Martial to the right. That trio has got United fans excited for the future, and brought sublime results for Solskjaer’s men.

The one thing that stands out with Rashford when he plays up front is his movement. He’s obviously got pace in abundance, but his general movement is also very good. As we’ll see below, Rashford has improved his understanding of how to move and, crucially, when.

One area we often see Rashford drift into is the left-sided half-space. Given his preference to finish with his right foot from this angle it comes as no surprise that he likes moving into this position. The image below shows the seconds before Rashford’s stunning strike against Brighton. He received the ball in this inside channel, turned inside the defender onto his right foot and curled the ball into the far corner. 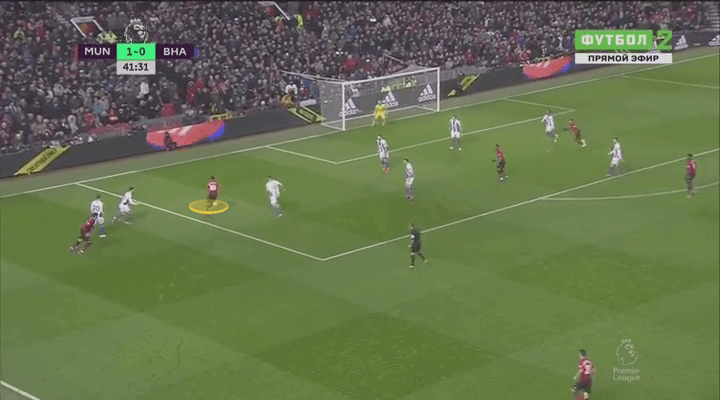 Rashford’s movement into this space creates a problem for the opponent as the centre of United’s attack is emptied. With Ibrahimovic or Lukaku up front they would stand in the central area and wait for the ball.

Rashford’s movement away from the centre creates confusion among the defenders as well as an opportunity for other players to run into the space he’s vacated. The below image shows Rashford attracting the attention of four Brighton players, who are all backing off him, while Herrera and Lingard make runs into the centre. 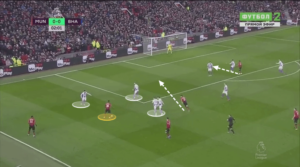 Rashford also repeatedly makes runs towards the right flank too. This makes him so unpredictable for defenders. Below, he runs onto Ashley Young’s pass down the right, dragging a centre-back that he isolates out wide. He then beats him, dribbles past another defender before setting Paul Pogba up in front of goal after Pogba attacked the space Rashford had vacated. 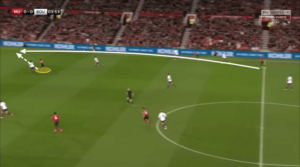 Rashford has also shown glimpses of improving his movement inside the penalty area. This was particularly evident in his goal against Bournemouth. Below we see how Rashford makes a run towards the back post behind the centre-back marking Pogba. Martial plays the ball into that space and Rashford scores. 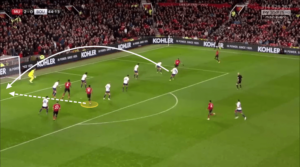 The England striker’s improved understanding of when and how to move was further demonstrated by his movement prior to his goal at Newcastle. After playing Lukaku down the right, Rashford made a run away from the Belgian towards the left (white arrow). A lesser striker might have made the move indicated by the yellow arrow. This would have limited Lukaku’s space as well as dragged the closest Newcastle defender to Rashford closer to the ball. 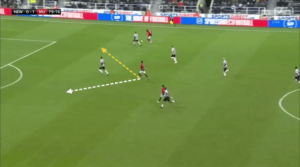 Instead, Rashford (yellow) drags the defender (white) away from the ball, thus creating a huge space between Newcastle’s defenders. Alexis Sanchez then arrives into that space, receives the ball from Lukaku and plays Rashford through to score the clinching goal. 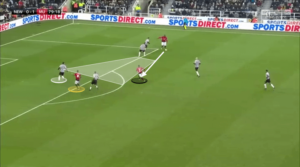 Rashford’s blistering pace is a threat whenever United face teams with a high defensive line. Tottenham felt this when the Mancunian ruthlessly exploited their high line and high positioning of the full-backs to score the winner at Wembley. As Pogba released the ball into the space behind Vertonghen, Rashford, starting in a split striker position between Vertonghen and left-back Ben Davies (white), raced past the Belgian defender and scored with a superb low finish across the goal. 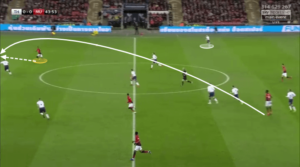 The below image also highlights Rashford’s ability to drop deep to attract and beat defenders. Here he drops deep, receives the ball, turns the defender and sets off on a run towards the remaining defenders. With the defender following him out of position, the movement has opened up larger spaces to attack, and indeed defend, which he can do with his blistering pace. 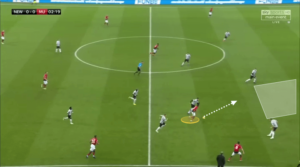 Rashford’s movement has been superb so far and there are continuous signs he’s improving with each game. Perhaps the coaching of a certain former striker has helped.

Another important aspect of what Rashford brings as the number nine role is his link-up play. Rashford has an almost telepathic understanding with Lingard, and also links up well with Pogba and Martial. Those four have all been excellent under Solskjaer. Let’s look at a few examples where Rashford has shone.

The below image shows Rashford laying the ball off to Lingard after receiving a pass from Pogba. Instantly after releasing his pass, Rashford is on the move and attacks the space behind the defender he’s attracted to press him. These types of sharp, quick passing followed by threatening runs have been key to United’s attacking play. 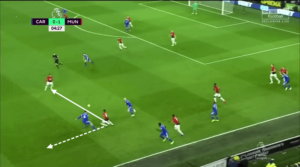 Below is another example from the Cardiff game. Again Rashford drops deep to receive the ball. Notice how the centre-back (white) has left the defence to follow his run half-heartedly. Rashford lays the ball off to Phil Jones. 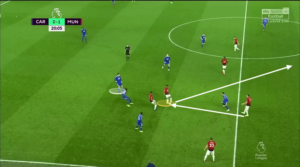 He then quickly turns and attacks the space behind the centre-back. He doesn’t receive the ball, but his quick passing keeps the ball moving and he then instantly threatens with a rapid deep run. 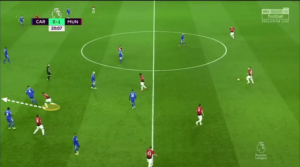 While Rashford played on the wing more often than he has played up front under Mourinho, Rashford isn’t truly a winger. He has, however, the quality to deliver from these positions. Below is the aforementioned assist to Pogba against Bournemouth where he delivers a superb low cross towards the Frenchman. This goal was a great example of why Rashford’s movement and link-up play is key to Solskjaer’s United. 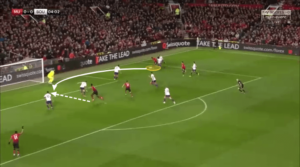 While the trend among the top teams in the Premier League has been to press high, Mourinho’s United dropped deep. In this style Rashford, as a winger, had to man-mark the opponent’s full-backs. Under Solskjaer, however, United press higher and they do so because of Rashford’s phenomenal work rate and energy. The below images shows what Rashford gives you. He first presses the Burnley defender and forces the pass back to the goalkeeper. 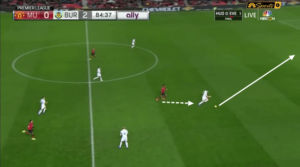 He then continues the pressing run and forces the goalkeeper into going long which allows United to win back possession. 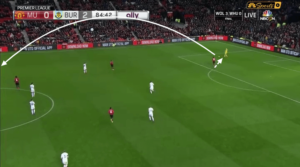 This is an area where Rashford can improve since he sometimes presses when his teammates aren’t ready to follow, but the capacity to lead the press is definitely there and gives United an extra dimension.

The statistics behind Rashford’s improved output

Marcus Rashford is clearly relishing life up front for Ole Gunnar Solskjaer. This is reflected in his statistics. In his six league games up front for Solskjaer, Rashford has had 31 shots. He also had five from the wing against Burnley. By comparison he had 10 shots in total in his last six games under Mourinho, and that included six of them coming in the win against Fulham. When he plays up front he takes a shot roughly every 19 minutes on average under Solskjaer.

Rashford has also scored in six of the seven games up front and managed to score in four straight matches at the end of December and in January for the first time in his career. With this being Rashford’s fourth season in the Premier League, his third full season, he has already surpassed his previous goalscoring records. He managed five league goals in his first two campaigns before netting seven last season.

This season has already seen him score nine in the Premier League. For a striker who is not yet clinical, taking more shots will be key to him growing those numbers further. Solskjaer is surely working on Rashford’s calmness and finishing every day too to make him finish from better angles and situations to further increase his productivity. What is already evident is that Solskjaer loves working with the 21-year-old striker.

“He has got frightening pace, he’s becoming stronger, he can now hold the ball up for us, he’s a great link player.”

Marcus Rashford is a very unique striker. There’s not any other striker just like him. When other clubs deploy an all-round striker like Barcelona forward Suarez, an out-and-out goalscorer like Icardi or a quick runner like Aubameyang, Rashford has aspects of all but is very much his own type of player. He can link play, he can threaten in behind, he can score worldies from distance or he can drift wide and provide crosses.

The area he needs to improve is his goalscoring. He rarely scores the scrappy goals a striker like Ruud van Nistelrooy always seemed to get. When he does, his output will rise towards 25-30 goals a season and then we can start talking about him as a world class striker. Because that’s what Marcus Rashford is: a striker, of his very own kind.