Swansea’s performance in Championship this season is rather inconsistent despite the efforts of their leading goalscorer Joël Piroe. The 22-year-old has scored 14 goals in the league so far, but his contribution isn’t enough to push the team to a better position in the table and give them hopes for joining the Premier League.

The Dutchman arrived from PSV in the summer and made an immediate impact, becoming one of the leading figures in attack.  His strong positioning and attacking flair earned him the centre forward spot, although he has also been used in other positions in the final third lately.

Piroe doesn’t tend to shoot frequently but relies on his efficiency which is a result of his positional sense and strong decision-making. He moves around the box effortlessly and doesn’t hesitate to shoot from distance too. He also tries to support the team by setting them up into goalscoring positions and has contributed with four assists as well.

In this scout report, we use tactical analysis to explain how he fits Swansea’s tactics and what qualities make him a successful signing so far.

Swansea’s set-up in possession and his role there

The 36-year-old head coach Russell Martin struggles to find the balance in the team’s performance. He came on charge at the beginning of the season after his first managing job at Milton Keynes Dons. His team prefer to stay considerably low and compact in their most-used 3-4-2-1 and 3-4-3 formations. They employ a possession-based strategy and rely on frequent short passing, resulting in their first place in Championship in terms of pass frequency per 90. They average 523.38 passes per game with the highest completion rate of 87.4%.

That is reflected in their high average possession percentile of 62.04% as well. They try to retain possession for long periods of time and despite the low and compact shape they constantly supply the final third with balls.

They usually prefer to exploit the flanks, although they don’t rely on a frequent crossing to create goalscoring opportunities but would rather use the players’ dribbling skills and creativity to create chances with through balls and smart passes.

That affects the frequency of their actions in the box, though, resulting in having a rather low number of shots and in many of their efforts on the goal being from distance. The team have scored 10 goals from outside the box so far this season, five of which are a result of Piroe’s efforts.

The 22-year-old is used as a striker, but he does move deeper to support the team movement and help with progressing the ball. He often occupies the half-spaces too and tries to provide a direct threat both from distance and from the box.

His composure and strong decision-making help the team in converting their chances into goals. He is often the target of his teammates’ passes and they rely on him to take on defenders in the final third and create chances. Very frequently he and his fellow attackers stay in the same line with the midfielders, creating overloads and providing more options in their build-up. Despite his CF position, his impact in midfield is immense.

Positional sense and ability to read the game

One of Piroe’s biggest strengths is his positional sense. His ability to support the team movement by dropping back and waiting to receive the ball helps the team in ball progression and opens the passing lanes successfully. Despite his movement to the central line, he always manages to stay at the top of the attack and be ready to provide a direct threat to the goal. He likes to stay on defenders’ blindside and expose the opposition through his dribbling. Combined with his composure, that allows him to retain possession and break through defences so he can move into a goalscoring position. 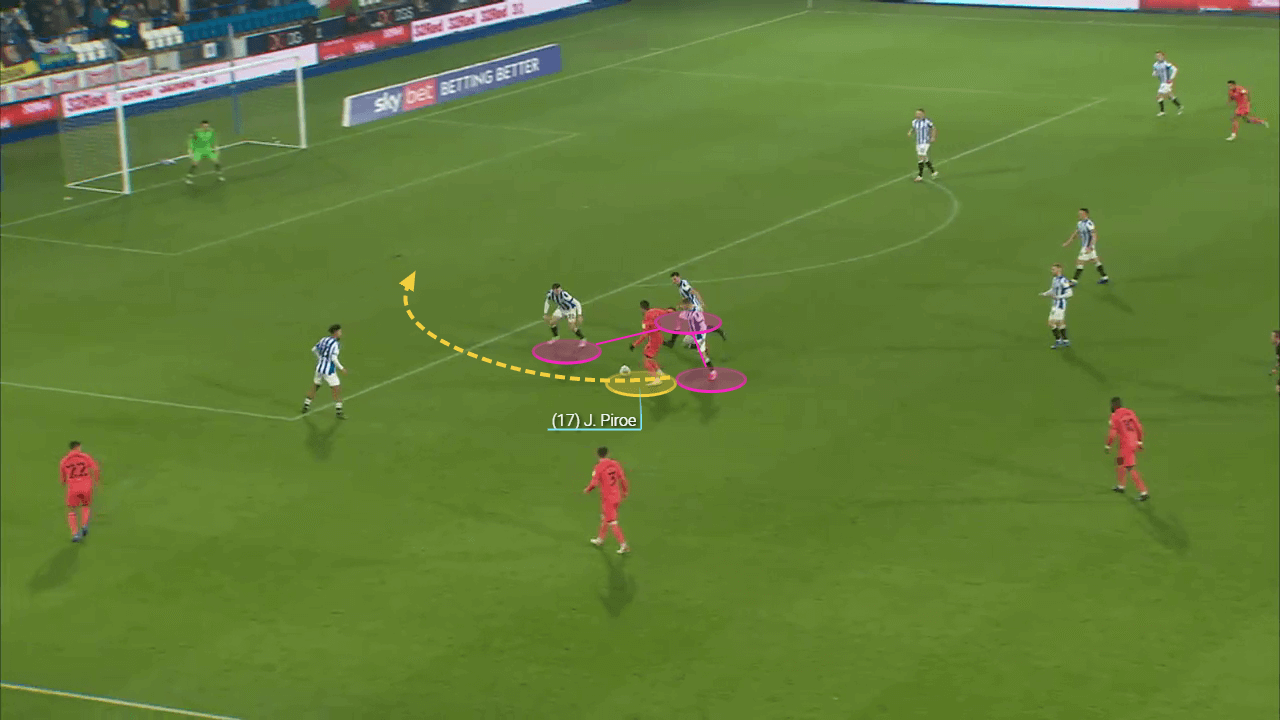 He can then quickly change the direction of his movement to take on defenders and shoot.He likes to move right to the edge of the box which allows him to threaten the opposition from distance but also to enter the penalty area and shoot from there. Piroe always tries to move into quality positions with or without the ball not only to take on defenders and shoot on his own but also to set his teammates up to goalscoring positions. The attacker has an eye for a good through ball and has contributed to four goals this season thanks to his spatial awareness and ability to read the game well. He is always aware of his teammates’ movement and his ability to hold on to the ball often allows him to lay it off and create opportunities.

Piroe’s pass completion rate is rather high compared to the other strikers in Championship and his short passing contribution is important for the team to be able to employ their possession-based strategy. He cannot compare in terms of pass frequency but his flair and judgement result in being successful in his efforts.

Despite being much more valuable as a direct threat, he is not selfish and would always try to support the team’s build-up play. His one-touch pass combinations often turn out key for the team to be able to reach the final third and threaten the goal. 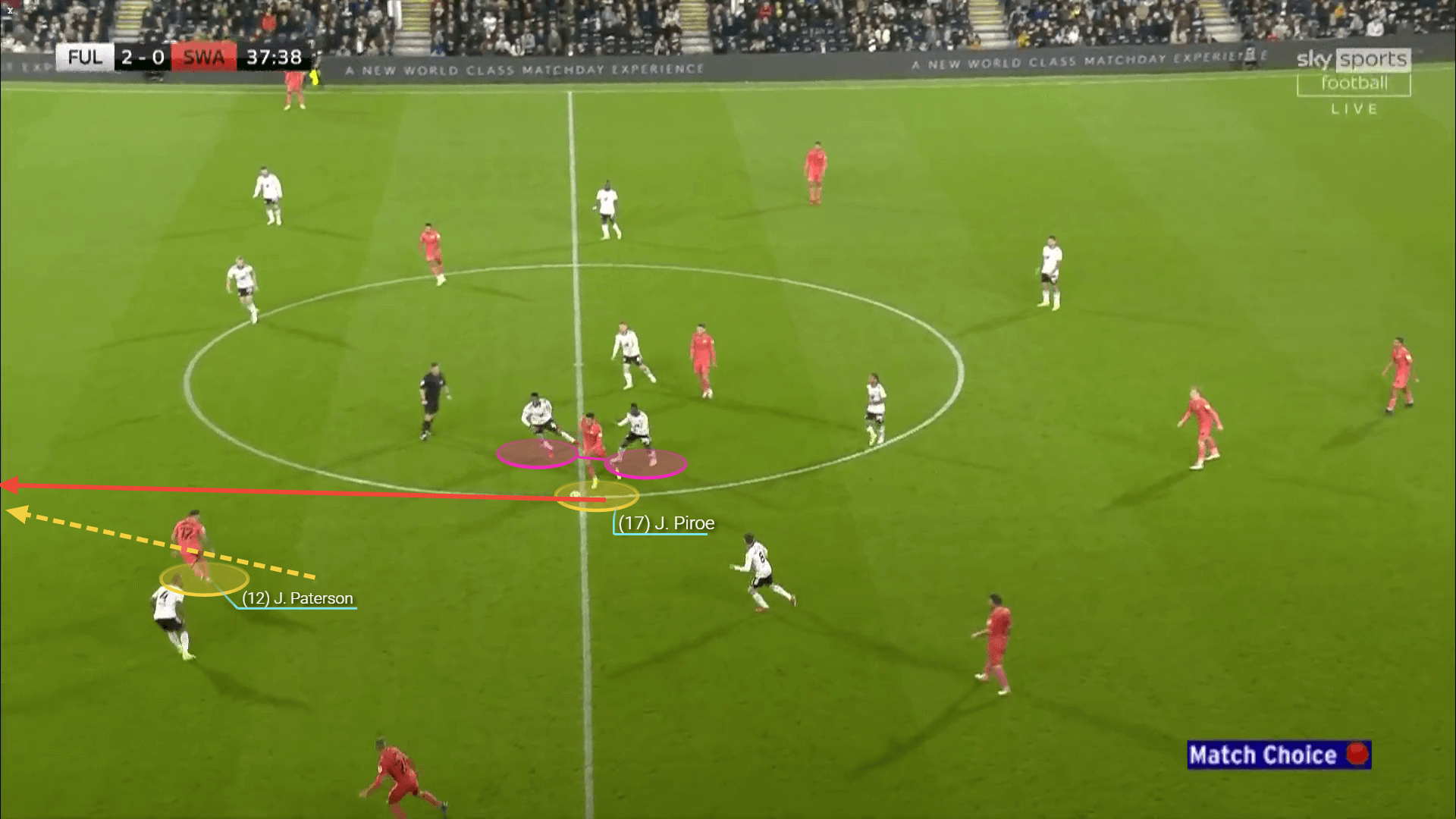 Then his composure helps him in bypassing the press and immediately setting his teammate up with a long through ball.His positioning in and around the box also allows him to take advantage of second balls during attacking set-pieces or after crossing attempts. His quick reactions and awareness in such situations make him a valuable addition to the team.

His decision-making is key to his success. He can make decisions in a split second and wouldn’t hesitate whether he needs to hold on to the ball and try to escape the press or should rather use the opportunity to shoot directly and catch the opposition off-guard.

While he can successfully take on defenders and bypass the opposition press, his decision-making is what allows him to directly shoot once he gets to the end of a pass. Piroe’s tendency to step up in different attacking situations and not only create chances but also take advantage of them has proven to be crucial for Swansea in attack.

The youngster has a lot to prove after a couple not so successful seasons in the Eredivisie but he is on the verge of becoming Swansea’s hero who can keep them away from the relegation zone, despite their inconsistent performance. He provides a direct threat both from distance and from closer range which is very valuable, especially against teams who have a solid defensive structure and tend to drop into a low block.

Piroe is yet to come under the radar as a transfer target but there is no doubt that he can become one of the Championship’s hot prospects should he show consistency under Russell Martin. The head coach already described his impact off the ball as “brilliant” and praised him for showing “big character” in their games.