With the amount of talent produced by Tottenham’s academy in the last decade, It’s no surprise that there’s a new kid on the block, another one of their own, another Harry. This time it’s an energetic playmaker. He has the ability to find space in deep pockets & transition the ball up the pitch with a quick burst of pace, or an impressive smart pass. Harry Winks is a modern & stylish player, a rarity out of England. In this player analysis, we will discover what makes him so different to any other English central midfielder.

Winks’ versatility in midfield is impressive, he has the ingredients to play as an attacking midfielder all the way through the midfield to a defensive midfielder.

Winks wins 6.3 defensive duels per game, just 0.1 less than N’Golo Kante – so it’s obvious he puts his shift in. Though this is even higher when played behind the striker, at 7.5 per game, 1.1 more per game than Kante – this goes to show his ability to press and win the ball in a variety of positions, and how useful he is to any modern pressing side.

Winks is also very efficient in covering for Pochettino’s marauding full-backs, who often leave acres of space open in the wide channels. This would be useful to England, with the national teams use of Trippier in advanced positions, he is often caught high up the pitch.

With an impressive pass completion rate of 91%, Winks is shown to be a neat, safe & calculated passer. Out of 29 average passes per game, 19 of these are forward passes. This goes to show his ability & desire to transition his side up the pitch and how well he does it. Despite having only two successful dribbles per game, these dribbles are incredibly useful, as Winks’ only dribbles when there is an abundance of open space is open to exploit.

This ability to dribble is the key to unlocking sides that play with a low-block system, with teams like Burnley, Brighton, and Southampton employing this system and proving hard to beat. The approach led by Winks draws out a player, opening space to exploit for attacking players like Eriksen or Lamela – who can cause real damage with one pass or shot.

In this image, we see Ghezzal and Maddison pressing Winks. Due to this poor press by Leicester, Winks spots the space in front of Ndidi, who is man marking Eriksen. 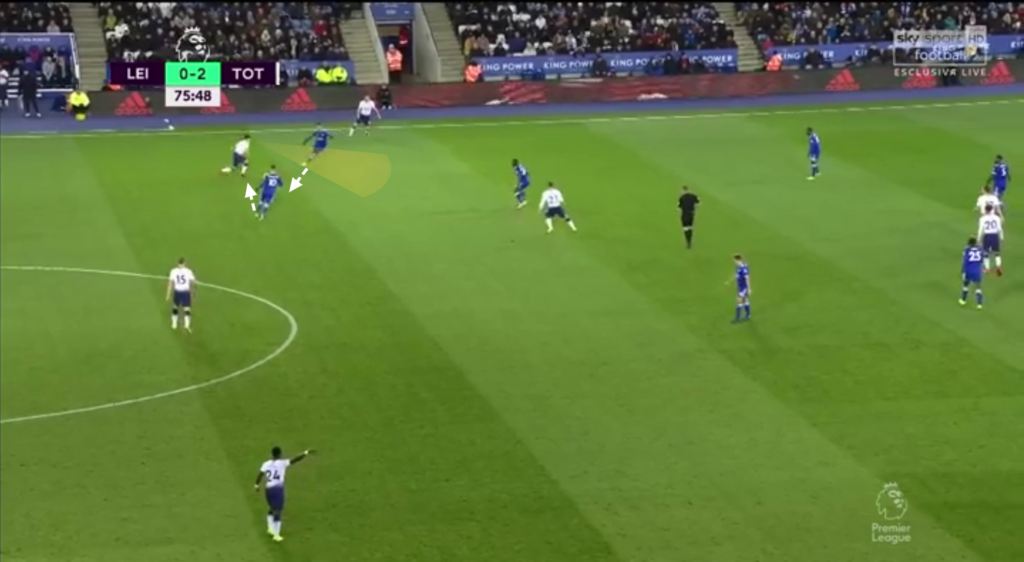 The space created by Winks’ burst past Ghezzal and Maddison, allowed Winks to create a passing triangle between Davies, Eriksen, & Himself. This triangle created a 3v2 situation as shown, with Eriksen in a position that allows him to either turn and shoot, or spread the play to the other wing.

Here’s another example of his ability to transition the ball quickly, with one short burst. Winks manages to beat every player in front of him, allowing Lucas and Alli to break. With an average of 32% of Tottenham’s attacks being via a counter-attack, this ability is incredibly useful and makes Winks an important pawn to Mauricio Pochettino.

This burst of pace, combined with Harry’s dribbling ability is arguably what makes Harry so unique. With such creativity & stamina, he is a truly unique player. At least out of England, that is. And with Dembele only getting older, his importance continues to grow as the games continue.

After a top performance against West Ham in his first game, Spurs fans got a glimpse of an energetic, exciting & creative midfielder. With aging legs in Dembele, Spurs needed a player who can transition the ball up the field quickly & intelligently – Harry Winks does just that. Whilst different to Dembele, they still do the same job – get the ball out of defence.

This heat map shows the areas Winks has covered. His ability to run for longer than his marker allows him to find pockets in fatigued oppositional lines. It also demonstrates his usage as a left or right sided centre mid, although he’s primarily a left-sided player due to his ability to play with either foot.

His ability to play with 110% energy all game allows him to become a bigger threat as the game dies on. With his dribbling ratio going from 82% to 85% in the second half, his direct dribbling causes more issues. Winks has work rate and creativity – often two player traits that aren’t combined. In the second half, Winks’ xA also rises from 0.01, to 0.08 – showing his ability to damage teams is at a higher rate in the latter stages of the game.

Harry Winks’ progressive runs are also impressive. An average of 1.17 runs per game, but it’s all about quality over quantity. This statistic interestingly rises to 1.34 in the last 15 minutes of the game, further evidence supporting his effectiveness as the game dies out. This effectiveness has proven to be a thorn all season, with Winks really coming to life in the dying embers of the game.

Gareth Southgate is a manager to put his trust in youth. He awarded Harry Winks his first cap alongside a number of young prospects such as Ben Chilwell, James Maddison, and Jadon Sancho to name a few. Winks is the only player who can play as a true deep-lying playmaker in the English national team – with the others being attacking mids, ball-winning midfielders, box-to-box, and central wingers.

With England lining up with a possession-based 4-3-3 more recently, the need for a player that drops deep and connects the back 4 with the midfield has increased.

His ability to drop deep to aid the defence in build-up play is unrivalled in comparison to other English players. Well, other than Jack Wilshere, with Alli and Lingard often high up the pitch, Henderson is left to this duty – something he doesn’t excel in.

This tactical profile could see Winks being used as a pivotal pawn in Southgate’s next push for silverware.

Harry Winks is a player you’d typically find in La Liga, with excellent technical ability and an impressive engine on him – is he the answer to England’s recent creativity issues? He can certainly add something we’ve missed since the downfall of Jack Wilshere, and could add another midfield option to the ever impressive central wingers, Alli and Lingard. At 22, the Tottenham and England star has a bright and exciting future ahead of him, and under the correct management, he could be something special.