Having faced injury concerns and limited playing time during his decade-long spells at Aston Villa and Manchester City, Fabian Delph finally looks to become a more regular Premier League first-teamer. The 29-year-old has signed a three-year deal with Everton after having spent four years with Manchester City.

The scout report explains using analysis how Fabian Delph will fit Everton boss Silva’s system at Goodison Park with the help of statistics. The tactical analysis in this scout report also shows how the Portuguese gaffer could make use of Delph’s tactics in his setup.

Delph was only featured in 11 appearances for Manchester City in the last season following his 22 career-high league appearances for the Citizens in their Premier League-winning season of 2017/18. Now the move to Goodison Park will provide the English midfielder-come-defender with promising opportunities to play regular football. At Everton, Delph would also offer the Toffeemen his experience of playing with the Premier League champion.

During his spells at Etihad Stadium and Villa Park, Delph has shown that he is capable of playing anywhere in the midfield. However, as Silva stressed, the veteran midfielder is expected to play as a box-to-box midfielder alongside another midfielder with offensive duties in Silva’s anticipated 4-2-3-1 formation.

Delph would be exposed to a right mix of talent to partner in Everton’s central midfield including the likes of Morgan Schneiderlin, Andre Gomes, and Idrissa Gueye. Ideally, Delph and Idrissa Gueye could form a robust midfield partnership with Delph as a box-to-box midfielder and Gueye as a deep-lying playmaker. Both Delph and Gueye possess equally strong athletic characteristics and are not without their attacking talents either thus could collectively offer a balanced midfield in deeper regions of the pitch.

Delph is also capable of playing along the flanks as he has been developed as a left-back under the supervision of Pep Guardiola and possesses a natural tendency to invert and become an auxiliary midfielder. That makes him a player of high tactical versatility.  However, since Everton are stacked with a range of options on the wings, including the likes of Oumar Niasse and Calvert-Lewin, Delph would be preferred for a more central role.

The position map of Delph below shows how intense his presence was at the left flank when he was playing at the left-back position at City. 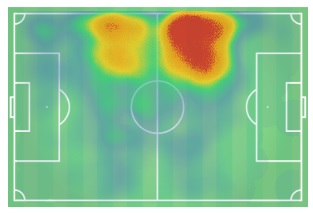 Delph possesses a high work rate and has an excellent grip on the ball. He is naturally aggressive when in the possession and can quickly drive forward into advanced positions with the ball.

In his last season, the defender notched up 0.8 dribbles per game on average at all national, European, and international levels, according to Whoscored.com. He has scored 82 out in ‘Ball control’, 87 in ‘Stamina and Agility’, 86 in ‘Balance’, and 84 in Aggression out of 100 each in FIFA Index 2019. His speed and agility would also add value to Everton’s attack allowing Silva’s men to play a speedy counter-attacking game confidently.

Delph’s high work rate allows him to quickly chase his opponents and slow down their play, as shown in the images below. This trait makes him a perfect choice as a box to box midfielder and also fits Silva’s profile of a midfielder.

Although Everton have an abundance of pacy wingers, they lack pace when it comes to central midfield. Now with Delph on the pitch, Silva can address his midfield’s concerns too. The inverted Manchester City fullback has an intense experience of aggravating his pace when playing in the deeper areas of the pitch.

Delph is recognised as a neat and tidy passer. He may not be enriched with high technicality when it comes to passing, but that’s not what Silva needs anyway. Delph doesn’t like to overcomplicate his passing and keeps it as efficient and straightforward as possible. This approach is suitable for Silva’s direct counterattacking style.

During his tenure at Manchester City, Delph was seen passing the ball firmly and finely at the flanks even under the opponents’ press. He averaged 63 passes per game with remarkable accuracy of 91 per cent, according to Whoscored.com. The Bradford born midfielder tends to be a central figure in a passing structure and can help his team in possession and control of the game for short instances. He scored 82 out of 100 in FIFA Index 2019 in the ‘Short Pass’ category.

The defender-come-midfielder is enriched with leadership and confidence – the traits which could either make or break a team in intense competitions. Delph’s leadership can now help prevent Everton from making the similar defensive mistakes they did last season due to lack of experience and command from the midfield, which cost them valuable points in the Premier League table.

Delph’s development at Manchester City transformed him from a weak and vulnerable hotspot for opponents to a stable link the teammates can rely on even in times of pressure. His persistence and ‘never give up’ attitude have been highly recognised both at Etihad Stadium and Villa Park.

While Everton boss Silva is looking to add more influential personalities into the dressing room with experience and mindset of winning big competitions, Delph undoubtedly fits his attitudinal profile for a midfielder.

Delph is not without its negative attributes, however. He is prone to making reckless challenges and getting fouled when things go out of control on the pitch. In the last season, Delph averaged 0.6 fouls per game as per Whoscored.com.

The England international also lacks technicality in defence and suffers in aerial duels. The 29-year-old won only 28 per cent of his aerial duels attempted last season in all the competitions.

Nevertheless, Delph is a balanced midfielder with attacking and passing talent and with experience as a reliable left-back, even though his balance comes at the cost of defensive technicality.

Delph’s tactical and technical strengths lie in passing, dribbling, and holding onto the ball. He has already been acknowledged as a player with high-quality by his new boss Marco Silva. The Portuguese manager is also impressed with Delph’s versatility and dressing room charisma. As the Toffees are looking to break into the top six next season finally, having the profile of Delph at Goodison Park is essential for them.