Eliesse Ben Seghir, the 17-year-old prodigy for Monaco, is the one to watch out for in the next few years. Following Kylian Mbappé’s footsteps, he has been the star of the headlines since his display against Auxerre.

Salim Ben Seghir, a winger for Marseille who is just 19 years old and is already creating a name for himself in Ligue 1, is Eliesse’s brother who also competes in France’s top division. But for the time being, let’s concentrate on the 17-year-old Monaco starlet.

This tactical analysis, as a scout report, will go through his best moments with Monaco under Philippe Clement’s tactics. This analysis purely aims at providing a better perspective on the player.

Ben Seghir is a talented playmaker who uses his dominant right foot. His touch on the ball is smooth, and he’s a master at dodging defenders. Because of his erratic play in the last third of the field, his opponents are reluctant to come any closer to the ball or the youngster.

On Wednesday, December 28th, after being replaced at halftime against AJ Auxerre, the young gun left his name on the football world by scoring twice. The goals were important in Monaco’s 3-2 triumph, and the youngster’s game-winner came in the 85th minute of his first professional game.

Wissam Ben-Yedder, Monaco’s captain, was replaced at halfway by a player of Moroccan heritage who had played for France at the junior international level.

Ben Seghir’s career started off in the youth programmes of SC Cogolinois, Fréjus Saint-Raphal, and SC Cogolinois again until he joined Monaco in 2020. He has also competed for the under-18 and under-17 French national teams.

As his effort rate is always high and his effectiveness never wanes, he is a great complement to Monaco’s defensive style. His ability to rapidly regain ball control after losing it may be his greatest attribute.

Following a loss of possession versus Brest, this image depicts the skinny guy getting into a fight with two other players. He is determined to regain possession of the ball at whatever cost. 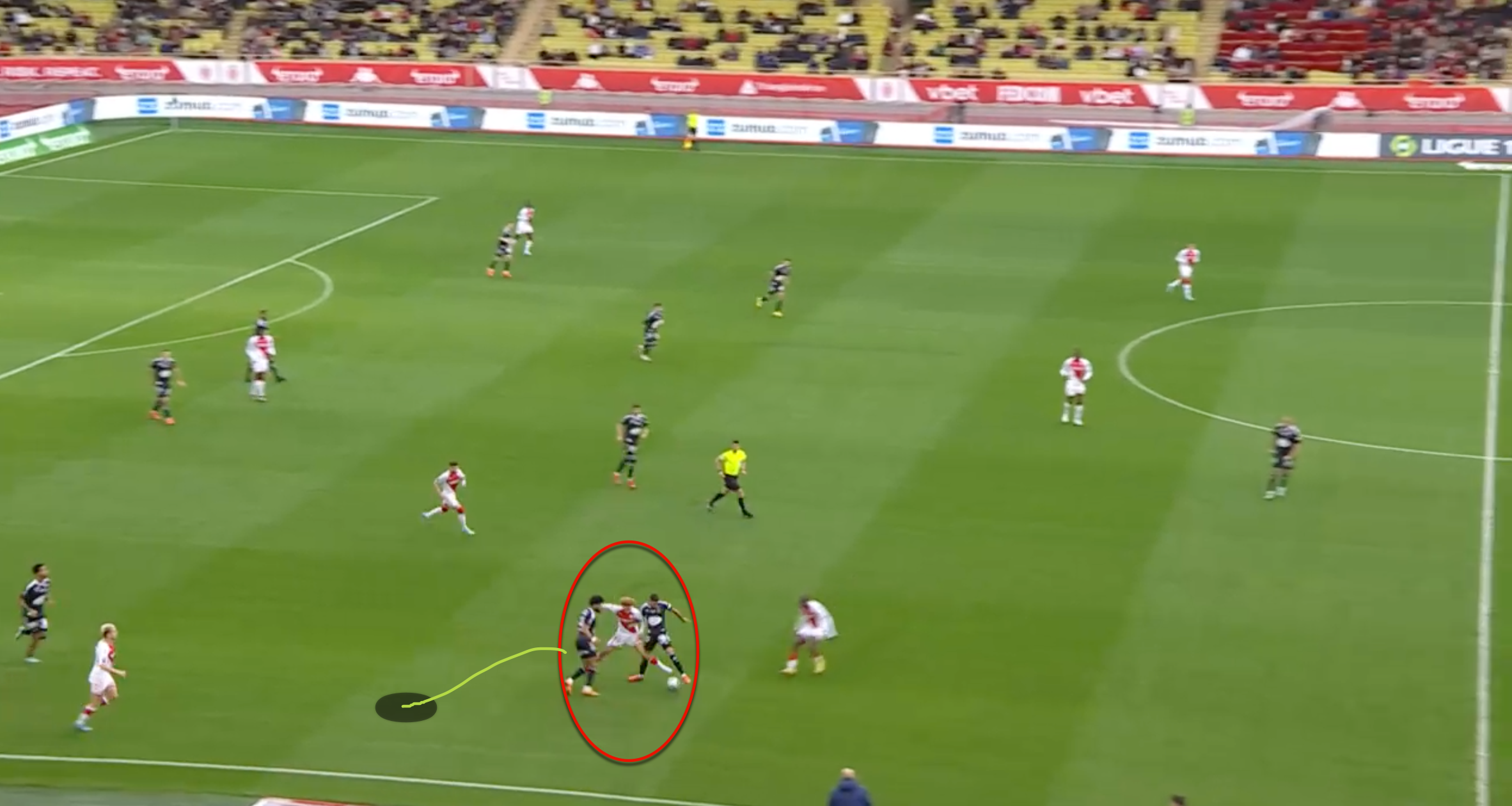 The way he carries the ball is illustrative in and of itself. His determination to keep possession of the ball despite occasional miscues is indicative of his positive outlook.

He seems to be in a rush to get his hands on the ball, and he works hard to do so. The only thing helping him do his defensive tasks is his resolve. His eagerness to regain possession of the ball is ideal for a quick attacker.

Due to his offensive positioning, his defensive duties have consisted mostly of recoveries, requiring him to drop deep before riding up to help Monaco regain possession. After Monaco’s centre defender loses the battle with Brest’s attacker, he runs against Brest’s offensive midfielder in the top photo. 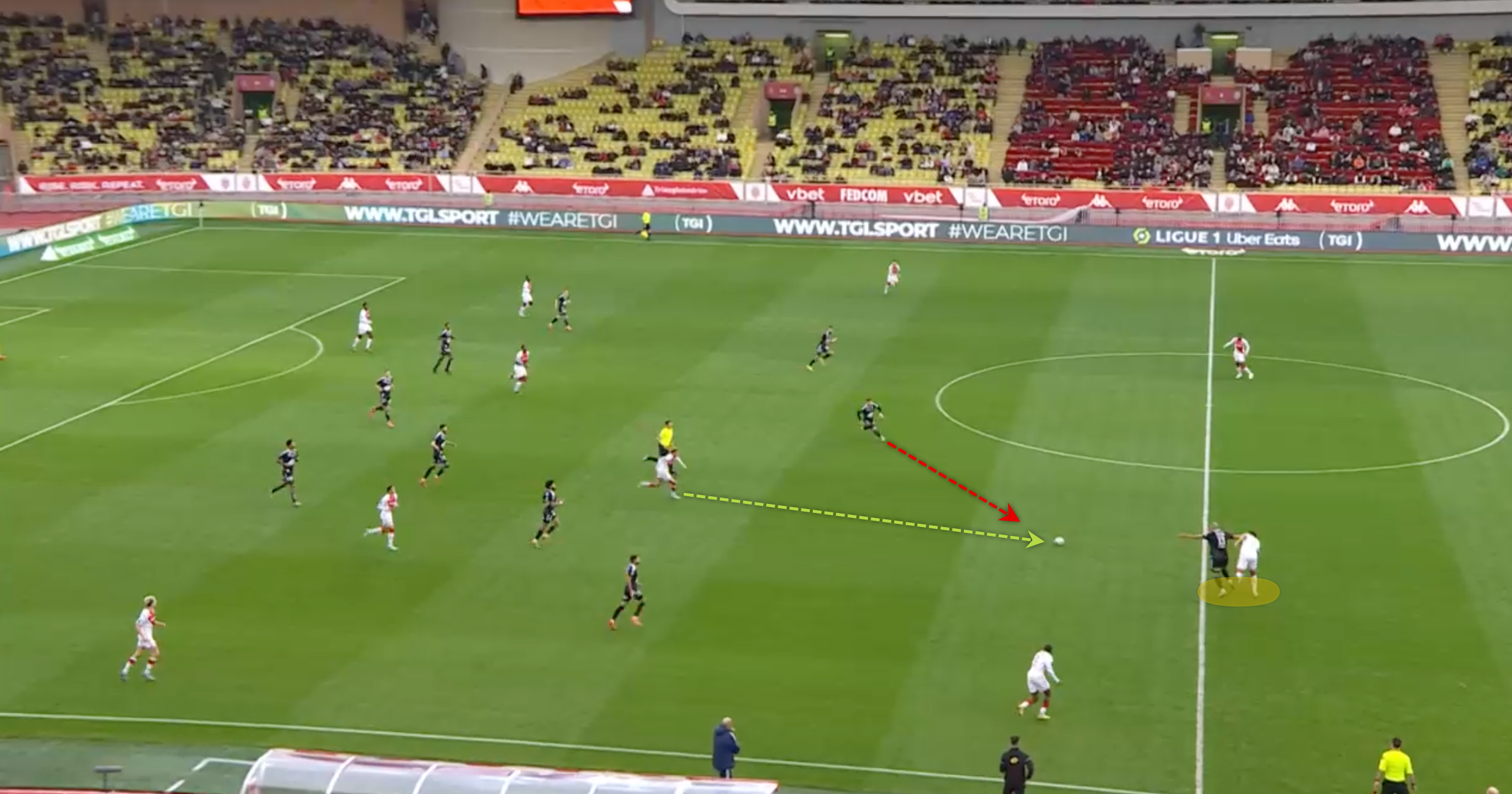 Even though he was standing far higher than his opponent, he was the first to the ball, giving Monaco control. One minor detail here is that Clement positioned him right forward. If you want to improve your team’s defence, you shouldn’t worry about leaving him out of your contemporary forwards. 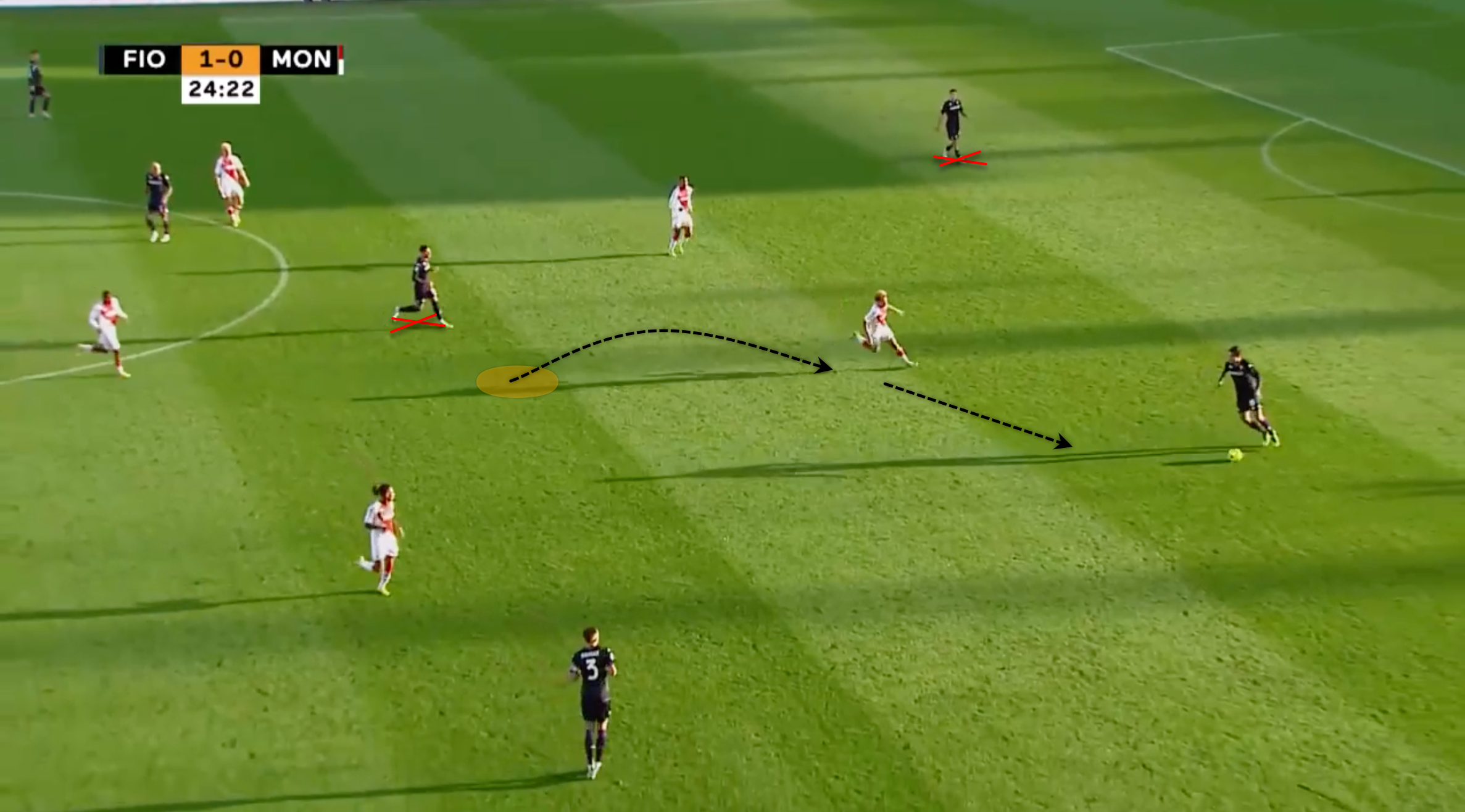 His strategy whilst pressing up front is to simply eliminate passing lanes for the central defender. He is quite good at it despite having stutters in the middle because he constantly checks the passing line. In the most recent friendly matches, he started as a right forward against Fiorentina.

He plans to eliminate the middle pass and the pass to the other central defender. This reduces Monaco’s pressing options and increases the pressure on Fiorentina. 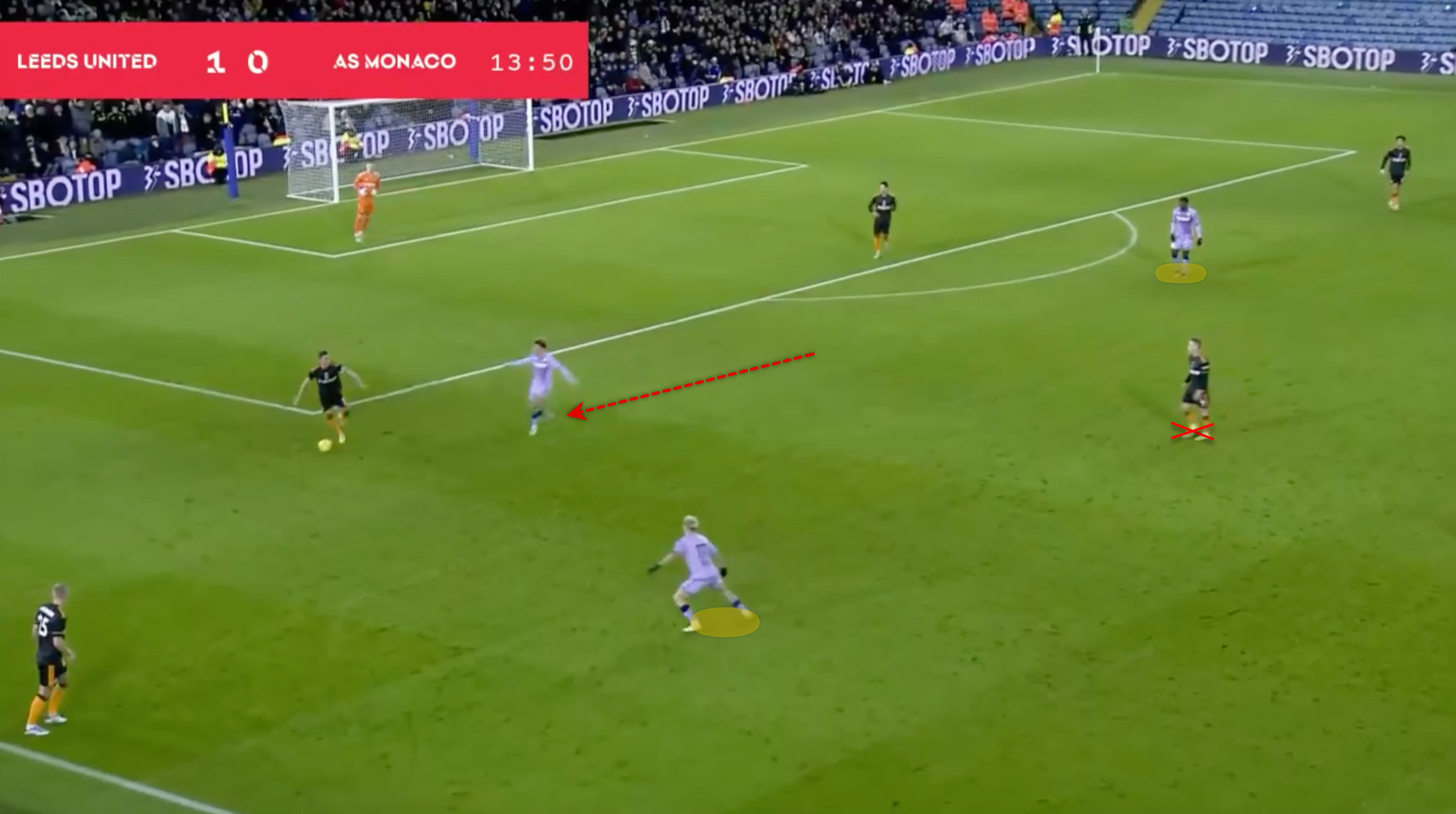 To prevent Leeds from breaking the press and creating chances in another exhibition match, he places a premium on denying the ball from reaching the opposition’s defensive midfielder.

This time he stutters twice to double-check on the midfielder, forcing the central defender into a tight spot. He shoulders the burden on his own and decides how to proceed. Thanks to his willingness to test out new strategies, he has discovered an effective defence. 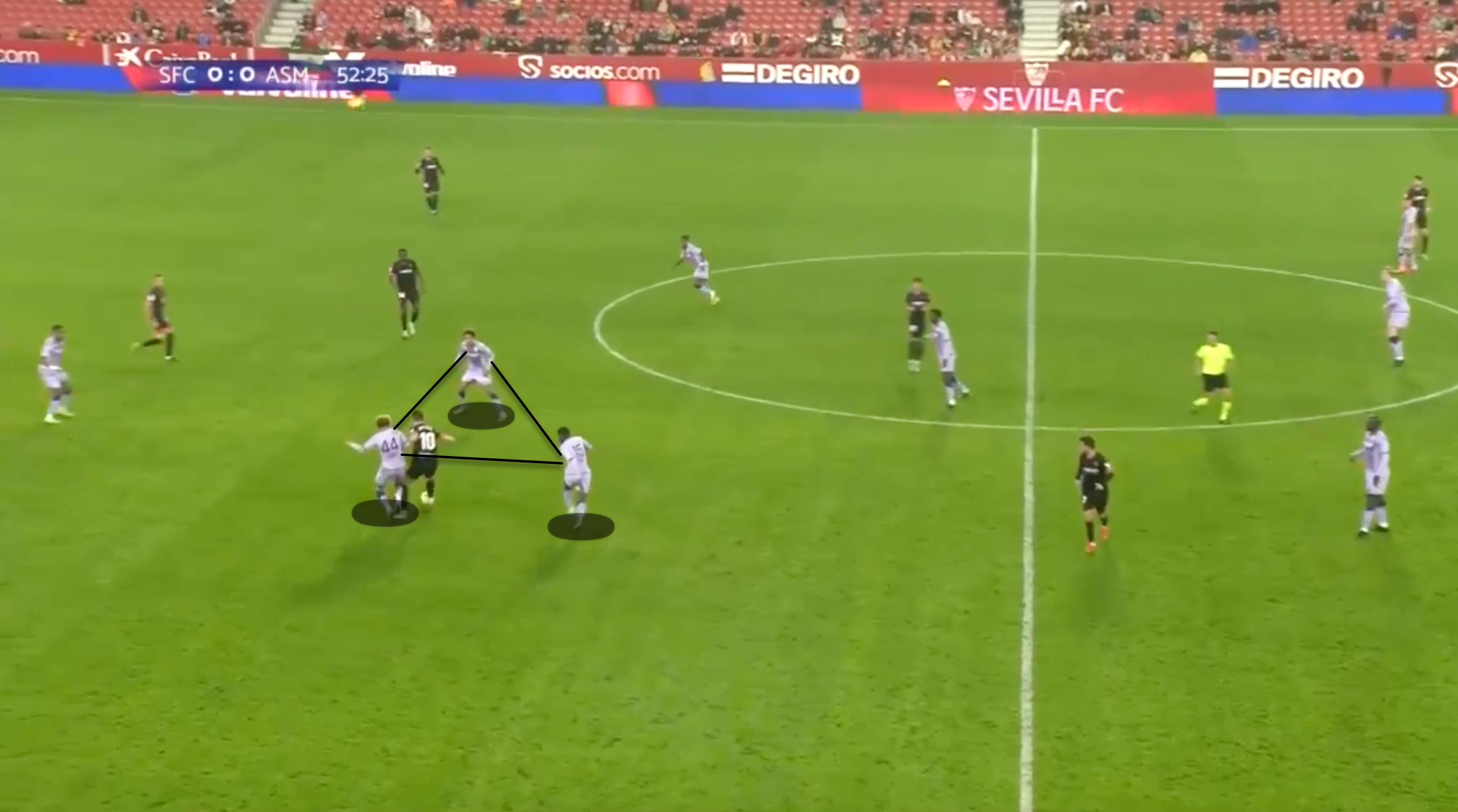 He sees two of his teammates close and engages the number ten of Sevilla in a physical duel. Seeing his mates close and covering the duel causes an immediate surge of enthusiasm in him.

He uses all his might to make an incredible tackle and strip the ball from the opponent’s number ten within his half. Moreover, while defending, he works effectively with his teammates to coordinate their efforts.

On the ball strengths

As the focus shifted to his efficiency while in control of the ball, his inventive dribbling and passing grew more dangerous. He displayed his creativity and passing prowess with some outstanding close-quarters play, the threading of some calculated through balls, and some stunning first-time passes.

His ability to dribble, first touch of the ball, and maintain possession were all top-notch, and he had a broad range of tricks under his sleeve to throw off opponents. They were able to pull off deft feints, stepovers, stop-and-goes, and lightning-fast direction changes. 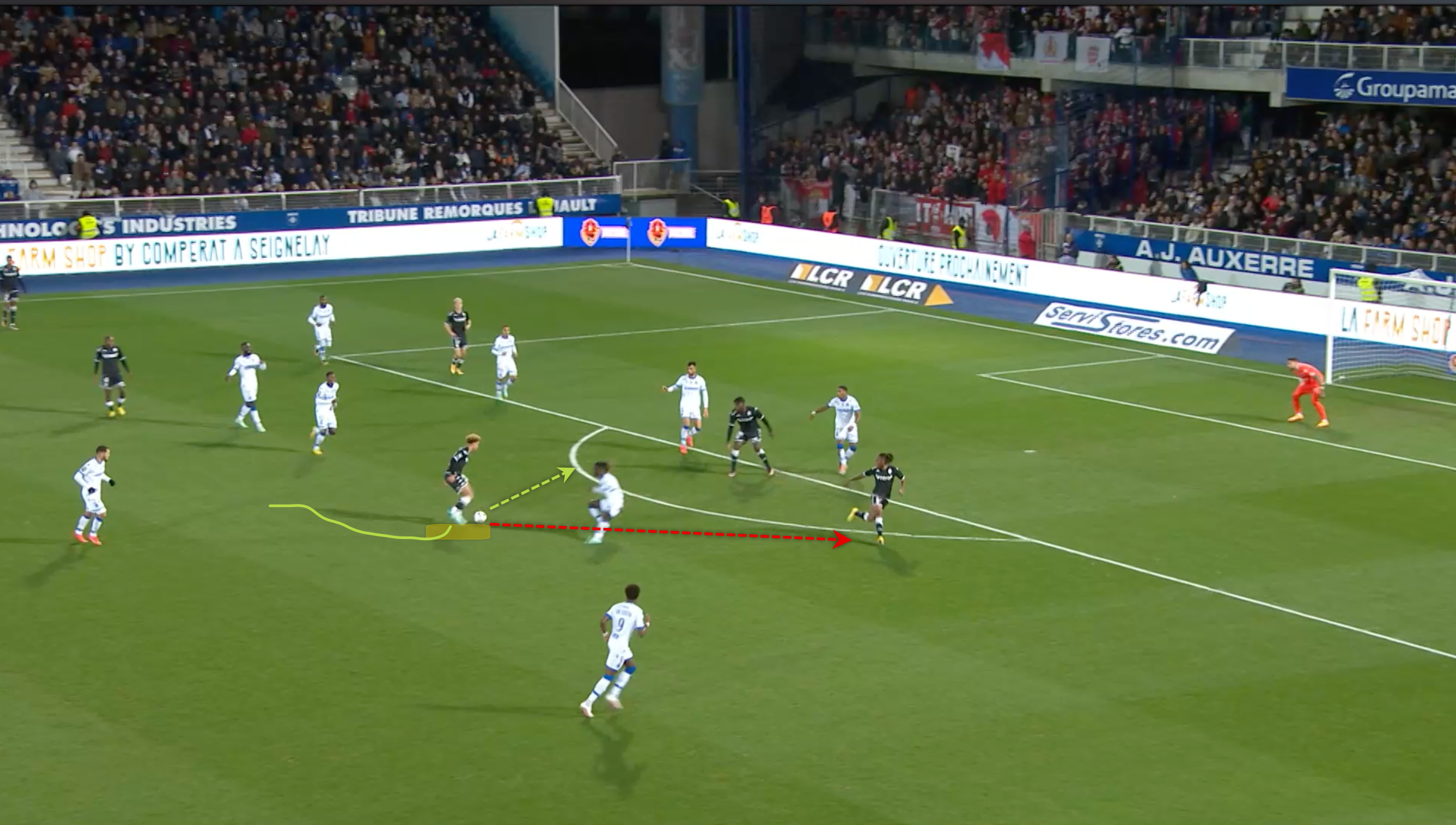 At this level of football, the ease with which he does his exemplifying ball rolls is remarkable. This youngster has tremendous potential in terms of his ball skills. His calm touch on the ball allows him to easily dribble past defenders deep within the opposition’s penalty area, as seen in the featured image.

Every defender who has to go up against him one-on-one has nightmares centred on him. He throws all he has at them, and they end up committing fouls and pummelling him as a result. Ben Seghir often displays a deft touch when he carries the ball in confined areas. 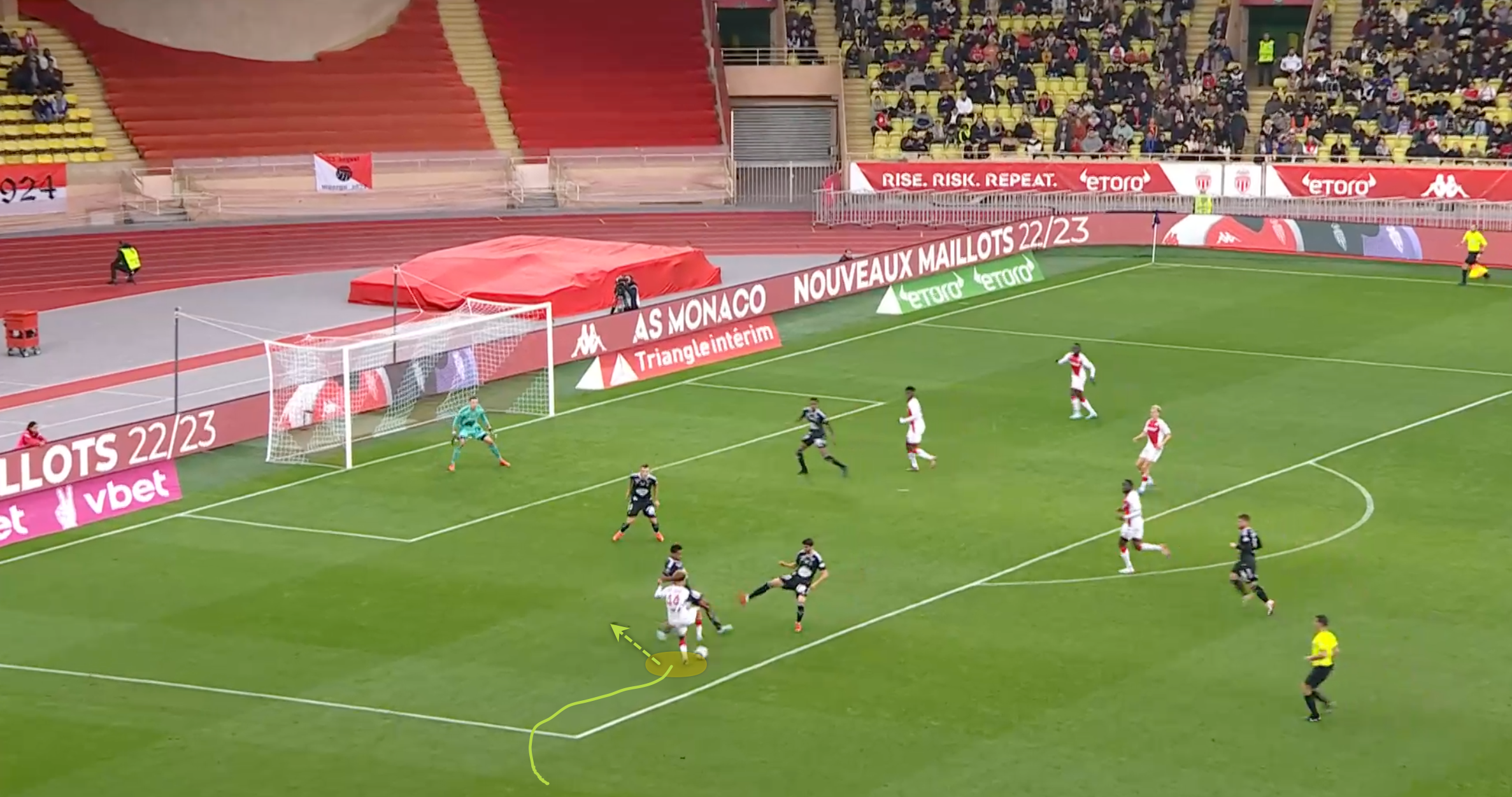 Even more amazing than his physical attributes—balance, power, and a low centre of gravity—was the way he rode problems and pressure. His inside cutting is parred for the course as a right-footer.

The defenders get a taste of what he’s capable of with his ability to shoot long shots from point-blank range. From time to time, he’ll fool about with it by pretending to shoot by rolling the ball as the defenders rush in to stop him. 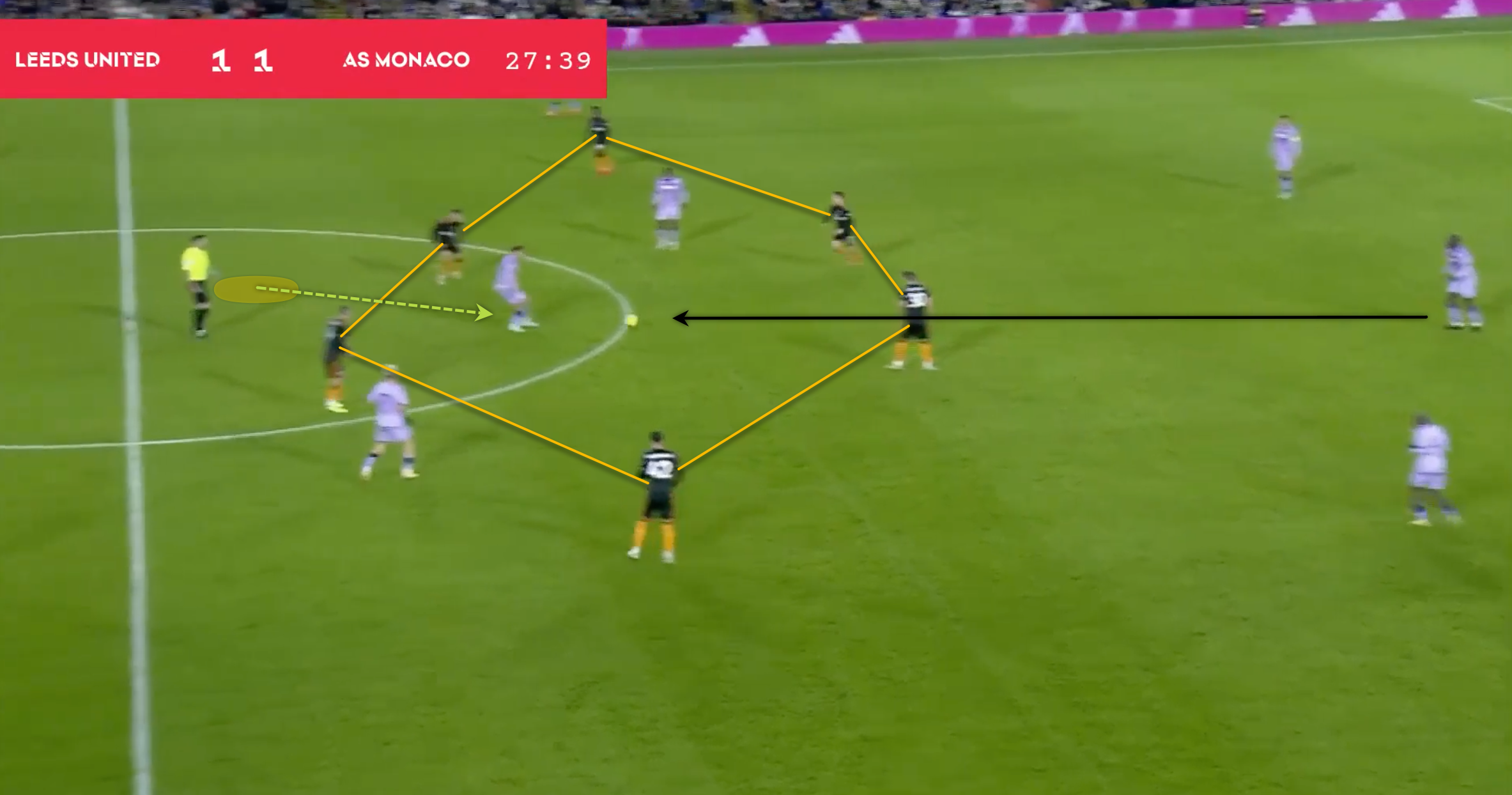 Even though he was playing against the first team and the home club, Leeds, he still managed to put up a fantastic performance. As he becomes more at ease, he seems to enjoy drawing even more opponents to himself. He is at his finest when he can catch the ball and then play it again in confined areas.

His plan to draw the opposition out of the area, freeing up his teammates, has been well-rehearsed. As a player who can operate well in either indoor or outdoor settings, his heightened awareness is a permanent fixture. Ben Seghir should be given complete artistic leeway to do his thing in the part. 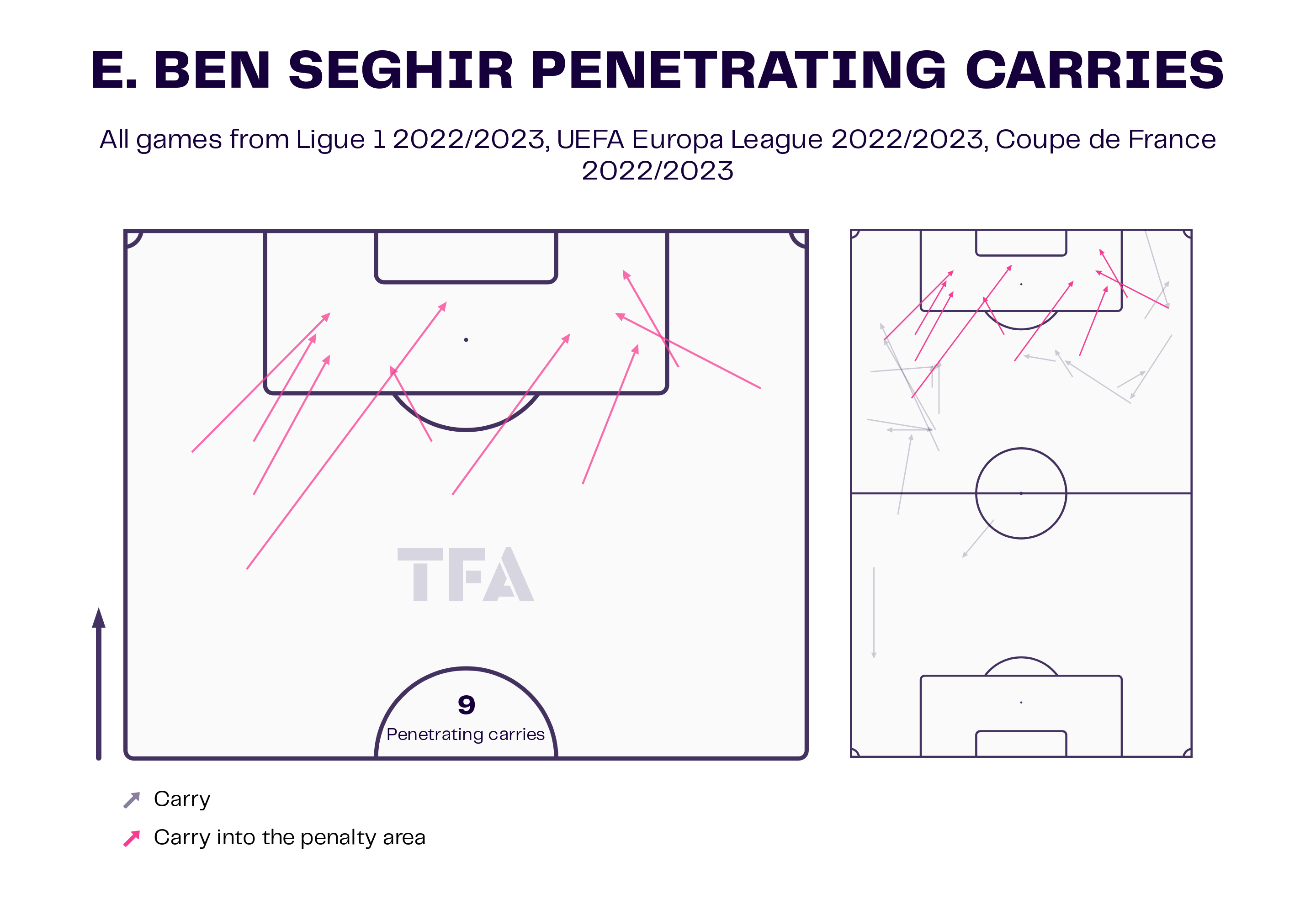 After making his debut on December 28 against Auxerre, he has appeared in a total of three games thus far. An incredible nine of his runs have gone for first downs within the 10-yard line, and he has many more successes outside the box. For a 17-year-old, that’s a promising beginning to a successful career.

His positive qualities, which stand out far and away from anything else, are his ability to drop deep to find a way to defeat the press and his ability to provide runs and dribbles.

In the image following, he pulls off another spectacular manoeuvre to avoid being touched by his designated opponents. Then, despite Leeds’s ferocious press, he composed himself to make a straightforward pass to the running midfielder, and a wide opening appeared on the opposite side of the field. 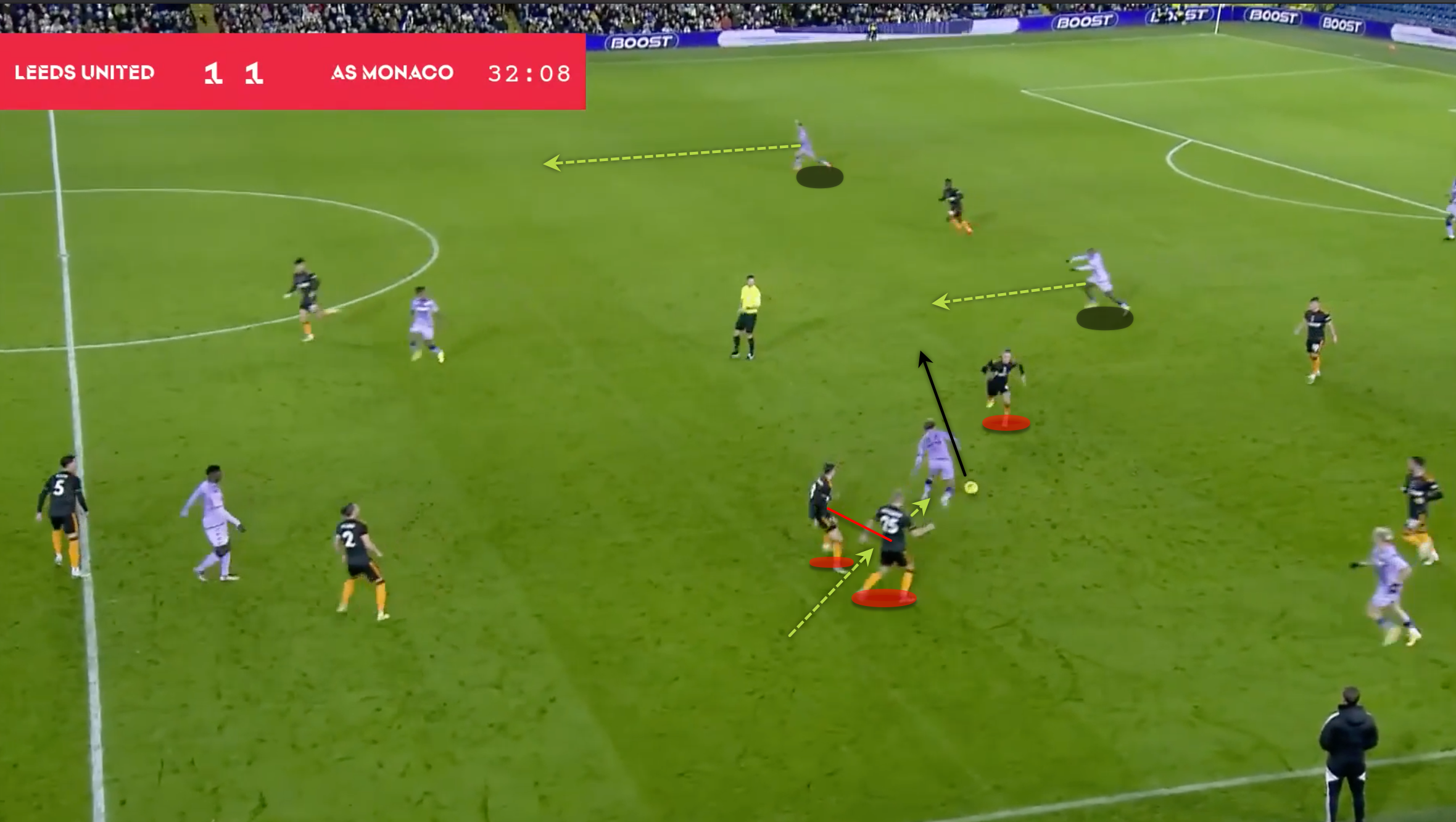 He’ll be just as successful with Monaco as he would have been with Barcelona or Real Madrid. This group provides him with a wealth of opportunity, setting him on the road to becoming one of the world’s best.

In a nutshell, he creates space for his teammates, joins the attack, and even scores goals on occasion. When it comes to his skills with the ball, he is in a league of his own and is the only youngster on the radars of top clubs.

One who can play in a variety of positions and is thus in a prime position to set up several attacking chances. Perhaps this best describes him as a player. The offensive team has more than enough possibilities thanks to his brilliant dribbling.

Clement recently directed the Monaco offence in only his second career game. Considering how much he thrives in a well-organised team setting, the timing of his advanced playmaking couldn’t have been better. 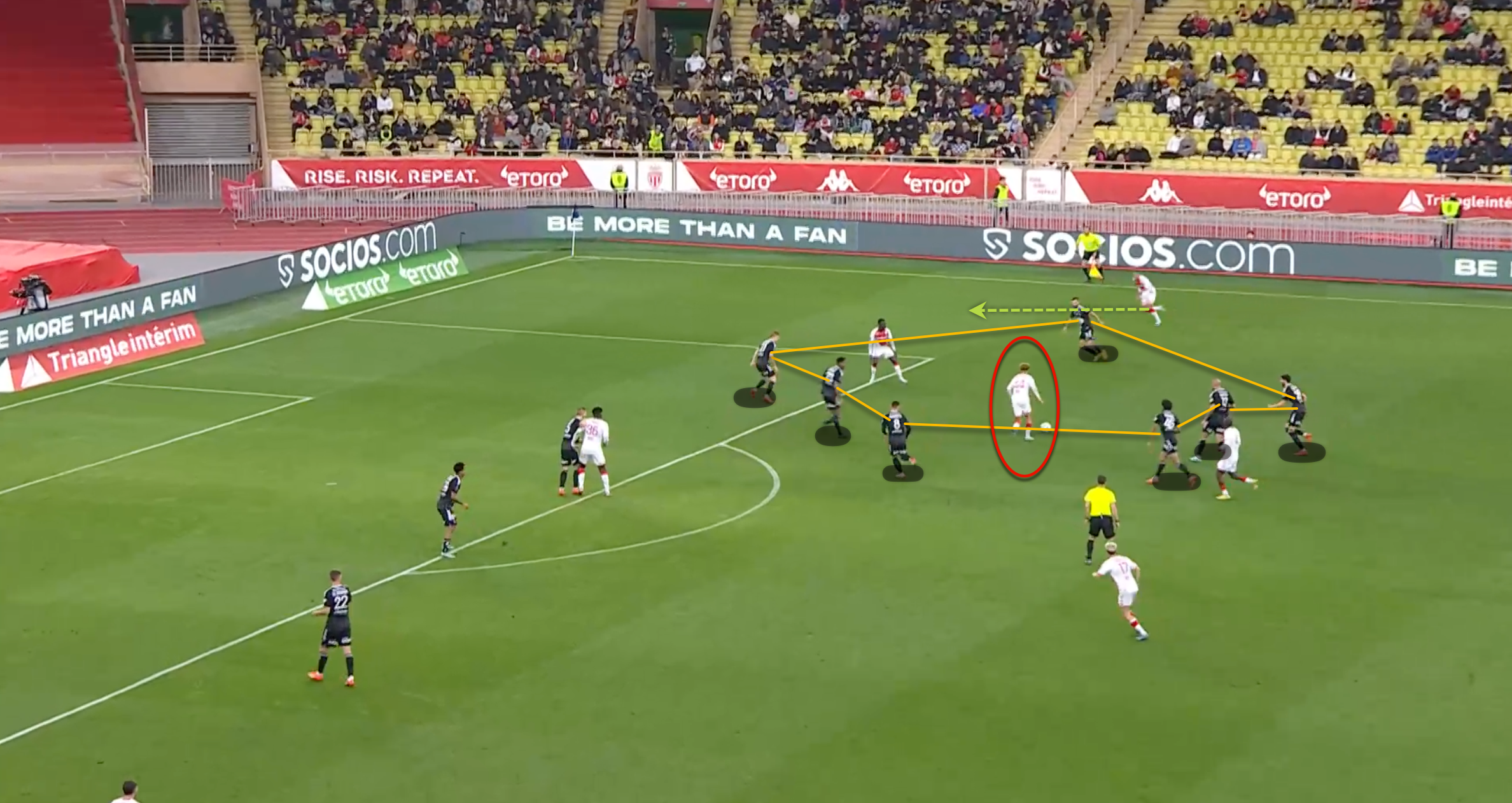 He does all in his power to put his teammates in advantageous positions and even provides them with breathing room to get back into the game at key moments. As Ben Seghir moves to the flanks, the two central defenders have pulled apart. The attack line had been dormant up until this moment, but now it was making a variety of attacking runs. 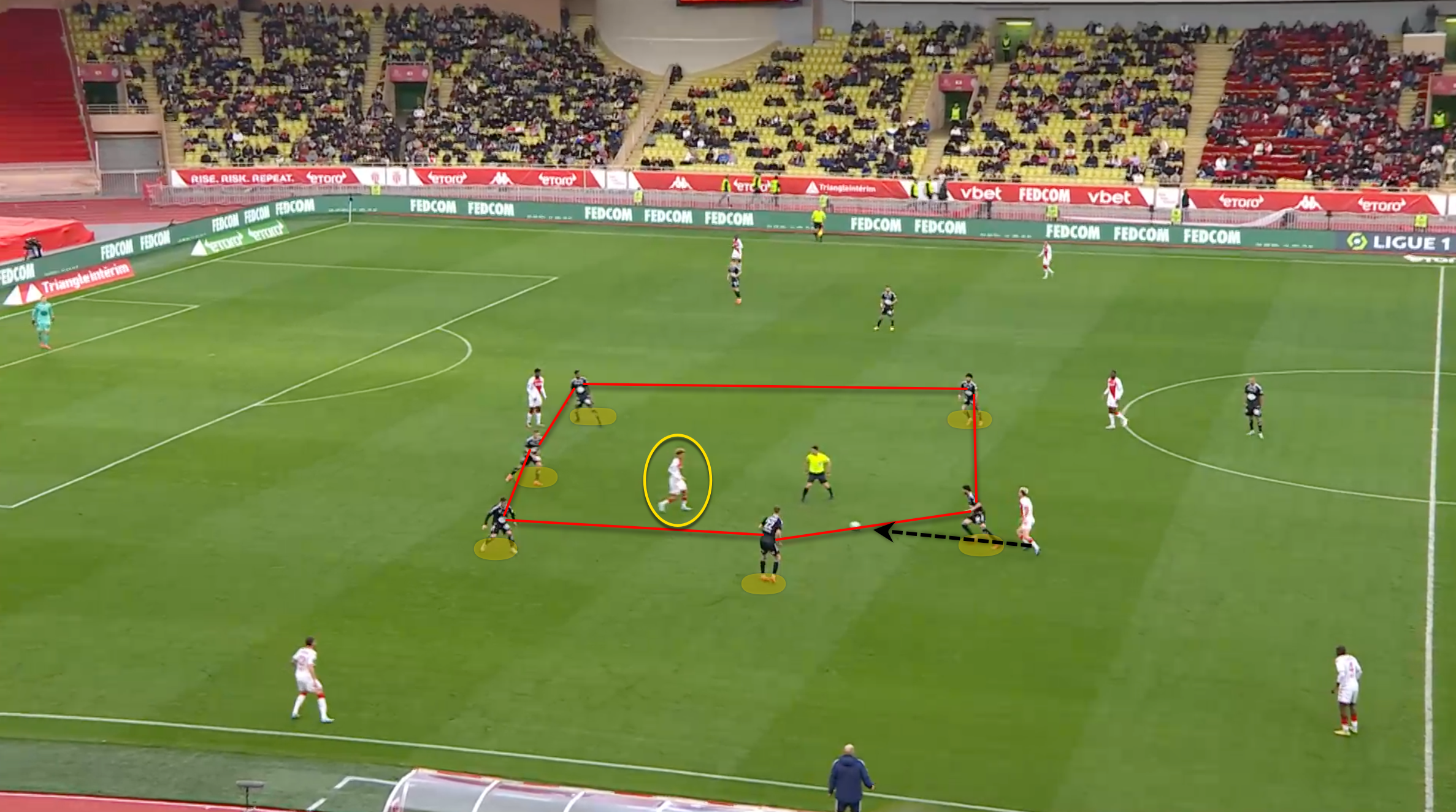 Due to his mobility across the field, Ben Seghir was impossible to track down and mark. As can be seen in the image above, he was left unguarded in the centre of the zone, where there were five other players.

No one could mark him to take the ball away from him; it was as if he were playing in his universe, completely in tune with his flow. He did not sit around and wait for luck to strike. He risked everything and succeeded. 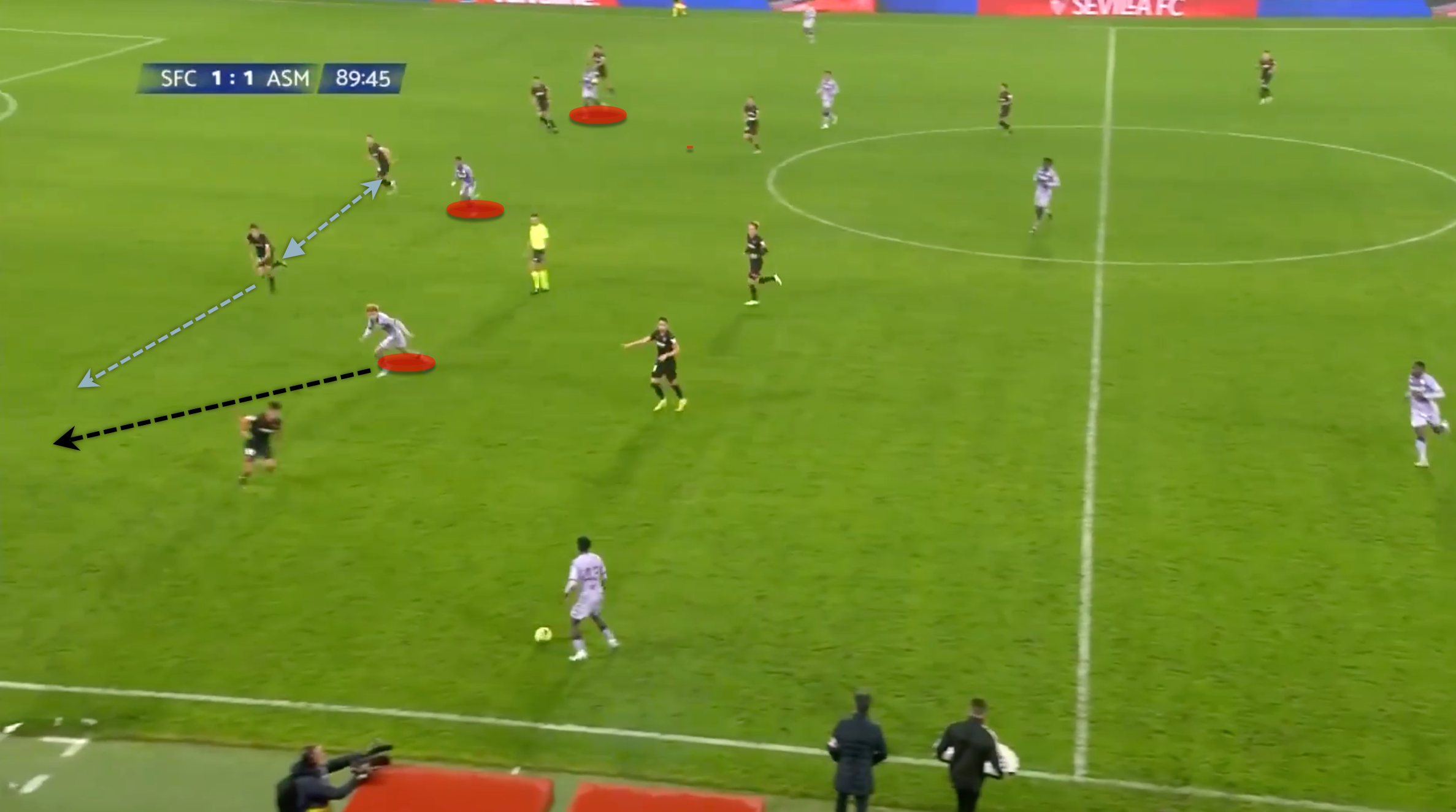 Ben Seghir, while wearing the colours of Monaco, has been able to display a level of talent that would be difficult to achieve in lesser divisions owing to the club’s style of play. He displayed his creativity and passing prowess with some outstanding close-quarters play, the threading of some calculated through balls, and some stunning first-time passes.

He lofts the ball softly over three defenders to the rushing fullback, who manages to slip through and create a dangerous situation. Once the fullback reached the end of the tough path, the beautiful ball dropped to the ground at his feet. 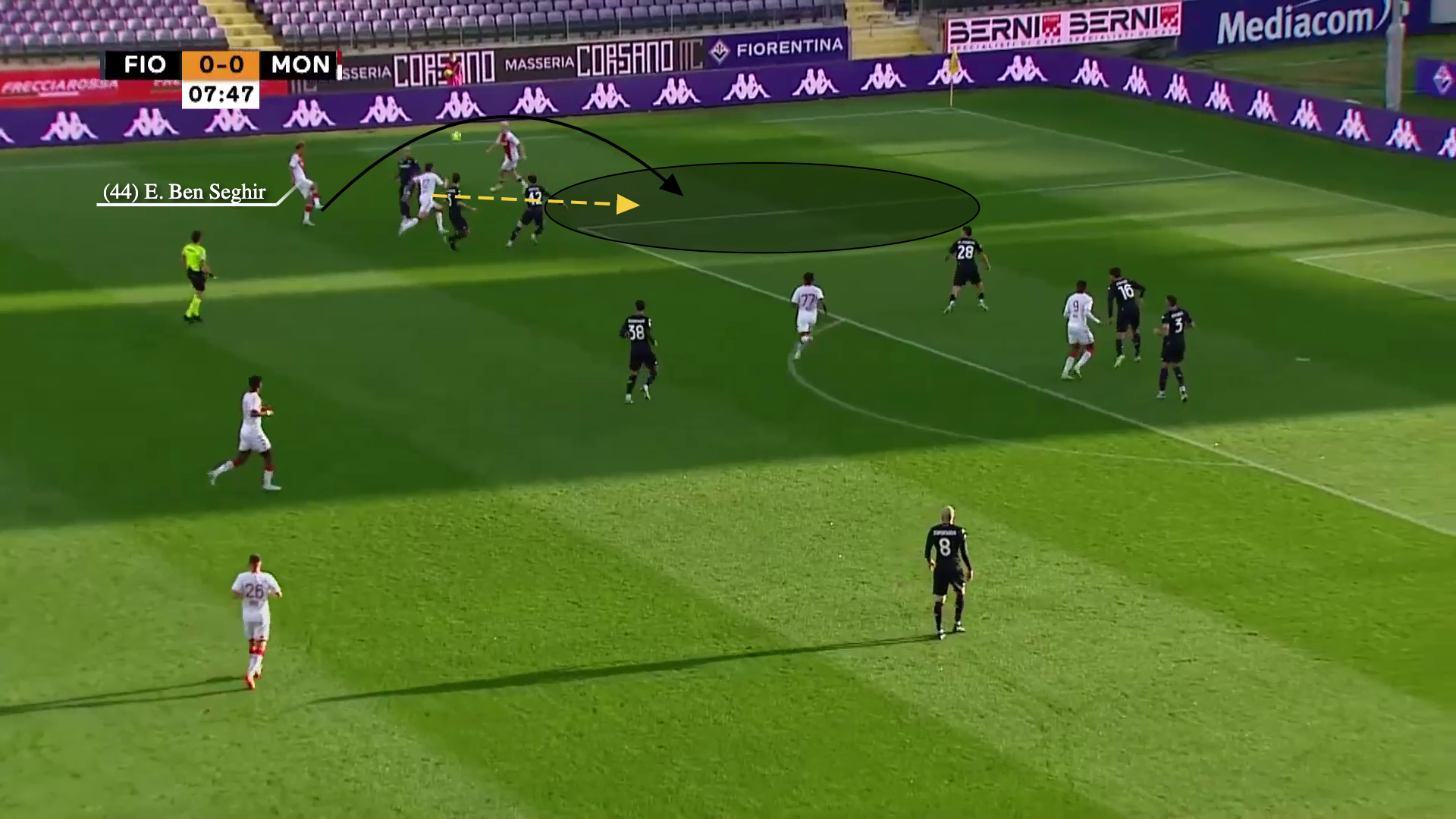 His professionalism and maturity allowed him to quickly go from the under-21 team to the main squad. An important part of Monaco’s success would depend on him, and he would have to decide between representing Morocco and France in upcoming tournaments. Ben Seghir may be the icing on the cake for both countries, given that both have already shown their potential.

Despite losing its iconic director of recruitment Luis Campos, who is now at PSG, Monaco has kept its reputation for discovering young players, which speaks well for the future availability of talent to the national team.

When Ben Seghir scored twice against Auxerre, he did it on the left flank, the same side of the field where 16-year-old Mbappé wreaked havoc on his debut for Monaco in 2015. Mbappé was an integral part of Monaco’s championship run that season. The management of Monaco is optimistic about their future now that they have Ben Seghir and Philippe Clement.

Despite Mbappe’s achievements, Ben Seghir became the second youngest player to score two goals in a Ligue 1 game on his fantasy debut, behind only French star Thierry Henry. 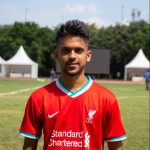 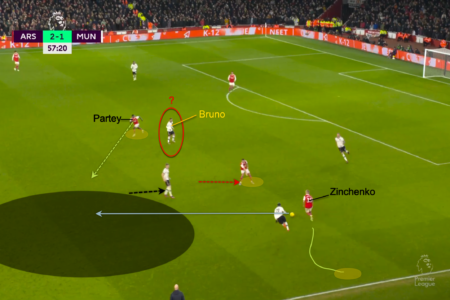 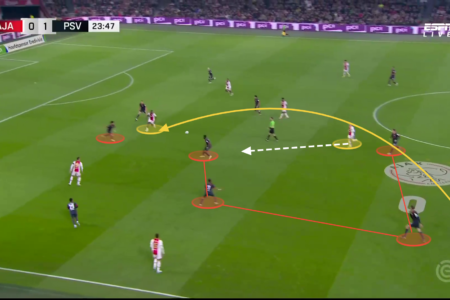 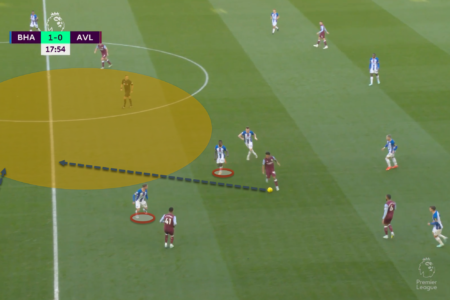