Thijs Dallinga has been a revelation for Excelsior this season in the Dutch Eerste Divisie – the second tier of football in the Netherlands. Dallinga is a 21-year-old Dutch forward with a lean build, and standing at 1.8m or 5’11”, he has moderate height for a centre-forward. Dallinga is equally quick, but not an outlier with his pace either. However, he has been nothing short of exceptional this season, scoring 31 goals and six assists. If Excelsior, who currently sit in sixth place, fail to gain promotion he is almost certain to leave this coming summer, however, even with a promotion, this may be out of their hands to a degree as it is.

This tactical analysis and scout report will look to break down some of the key components of Dallinga’s game, providing an analysis of his favoured tactics.

Dallinga plays with a fair amount of freedom in the possession phase, consistently working across the width of the pitch and dropping into deeper areas to get on the ball. His heat map, which is shown below, makes for telling viewing, given the sheer volume of touches he has averaged across almost the entirety of the opposition half. However, it is encouraging to see that this hasn’t waned on his volume of touches in the opposition box either, with plenty of action coming in this area of the pitch as well. 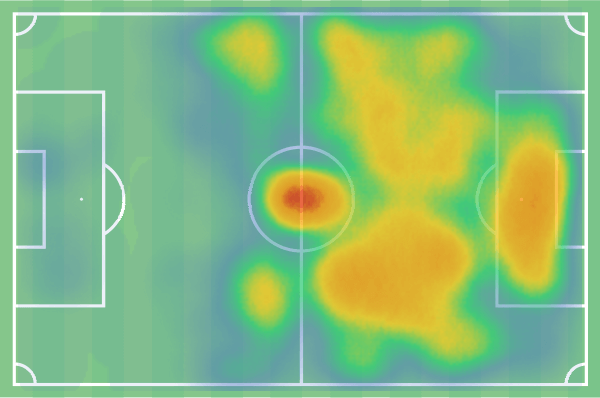 Dallinga will make late movements into these deeper areas to get on the ball and evade marking. He often starts high in a traditional centre-forward position, alongside a centre-back, but will test their positional sense and the quality of the opposition’s defensive shape in general, by frequently dropping deep and into wider areas to receive possession in between the lines.

The higher the level that he goes onto play, the more difficult it will be to consistently get on the ball unmarked in these positions, however, right now in the Eerste Divisie, he regularly receives possession in these spaces, often with the time to turn and drive forward, or pick out a through pass. 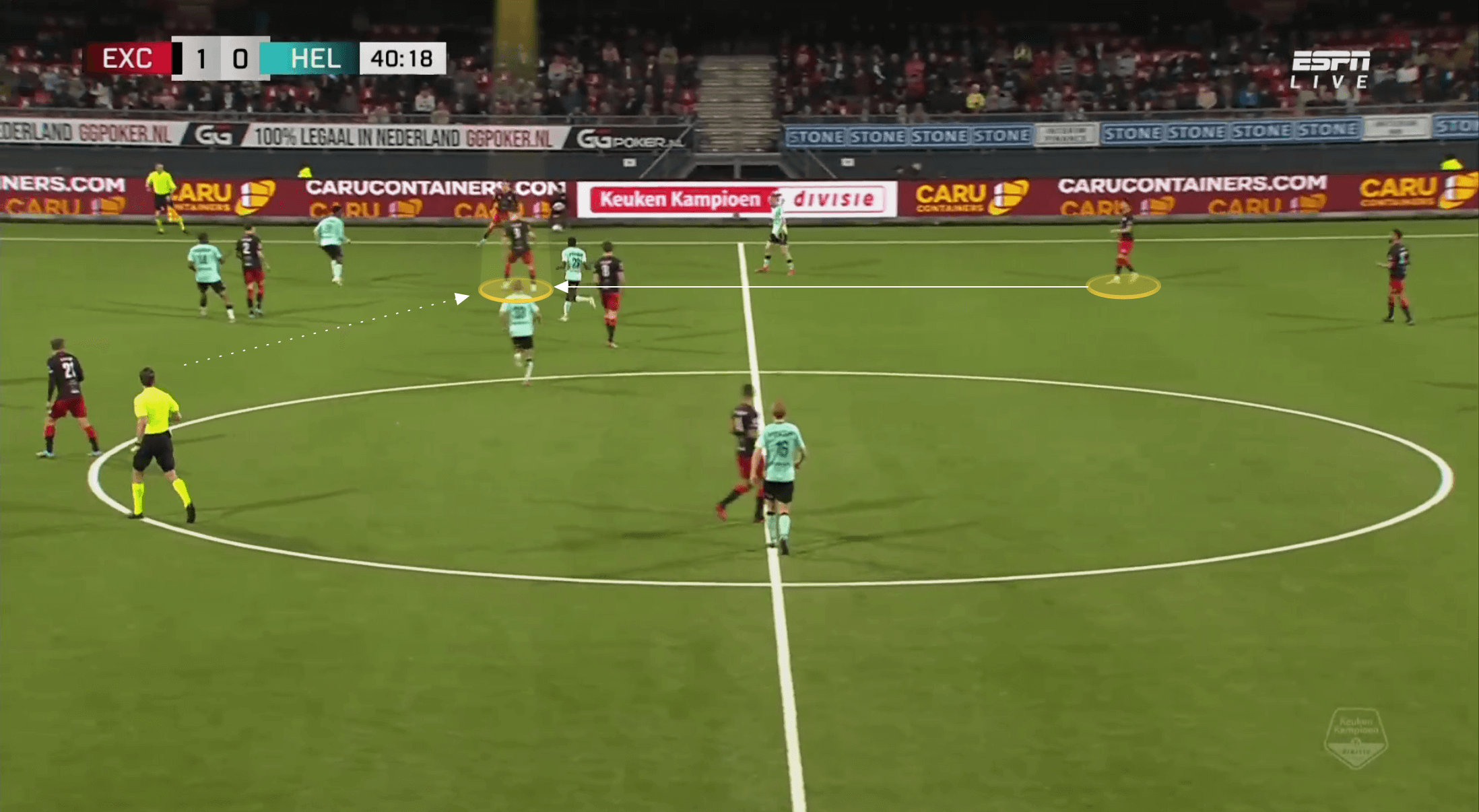 If initially unsuccessful in getting on the ball, Dallinga will use the space his movement has created to get on the ball later on and hurt the opponent in other ways.

We can see him doing this in the image below, initially moving well inside his own half to offer a first passing option. On this occasion, he is marked tightly and so doesn’t get on the ball. 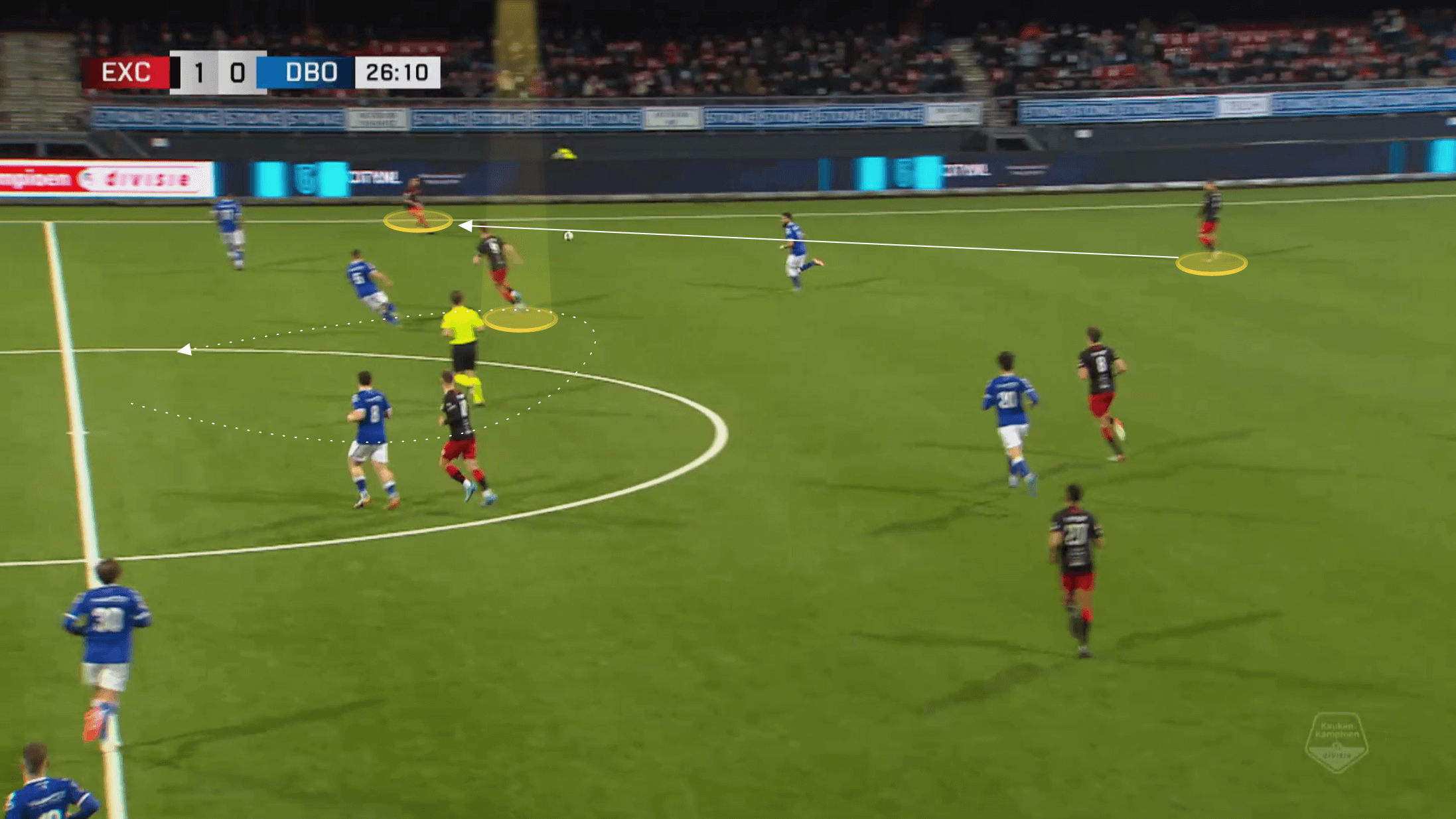 However, following the pass out wide, he then makes a run down the line ahead of his full-back. He receives the pass with his full-back now underlapping him, moving inside and beyond Dallinga. Dallinga’s awareness in this moment is excellent as he instinctively threads the ball in behind for the full-back to now run onto. 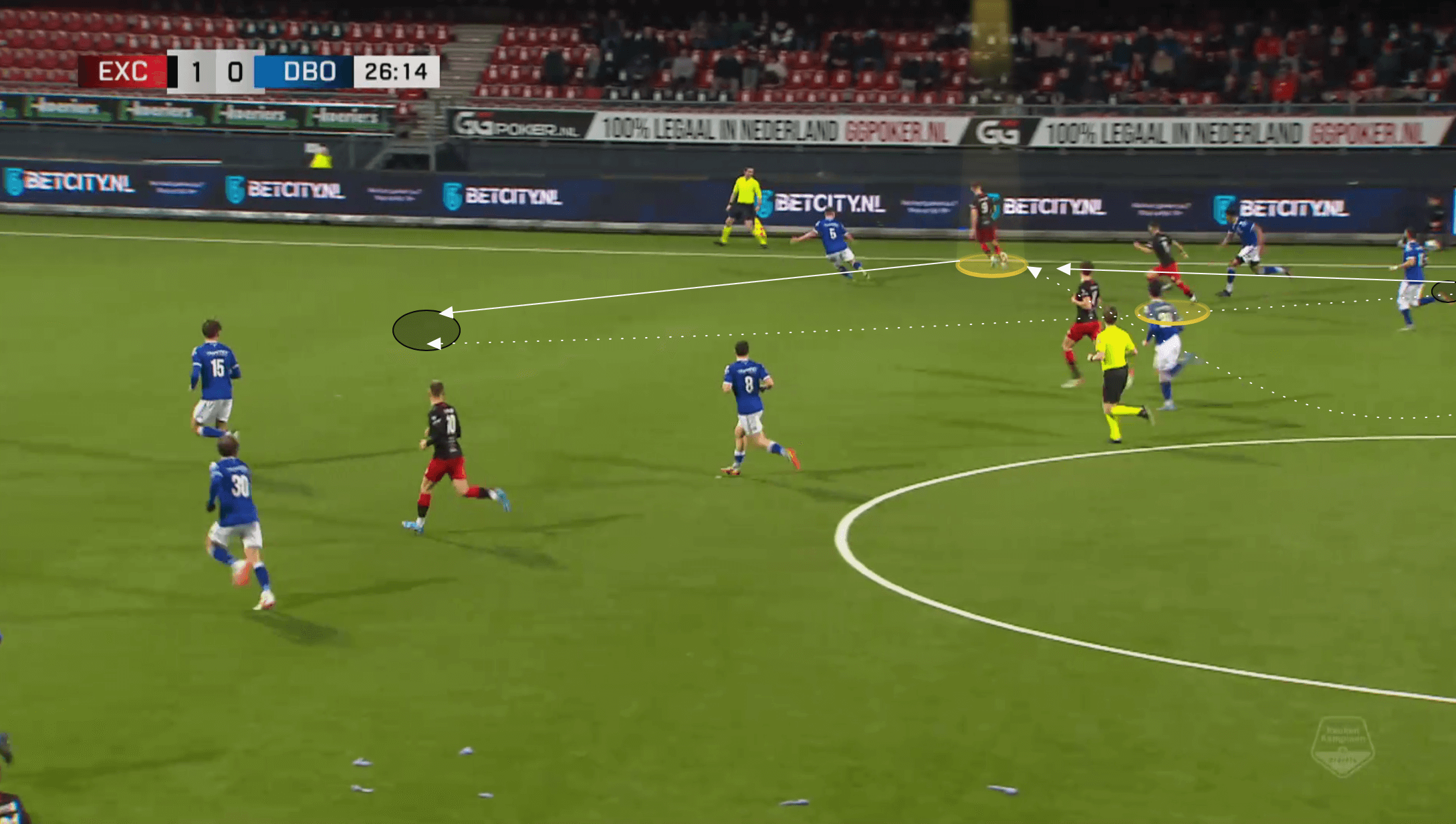 Whilst he continuously displays intelligent movement in periods of build-up play for his side, his movement in the final third is more mixed in its quality. When the ball is out wide and there isn’t space behind the defence to attack he can lack timing with his runs into the area, and doesn’t use misdirection or his change of pace effectively enough to lose his marker. This can lead to him making more basic runs which may be more easily defended against by high level and more experienced defenders. 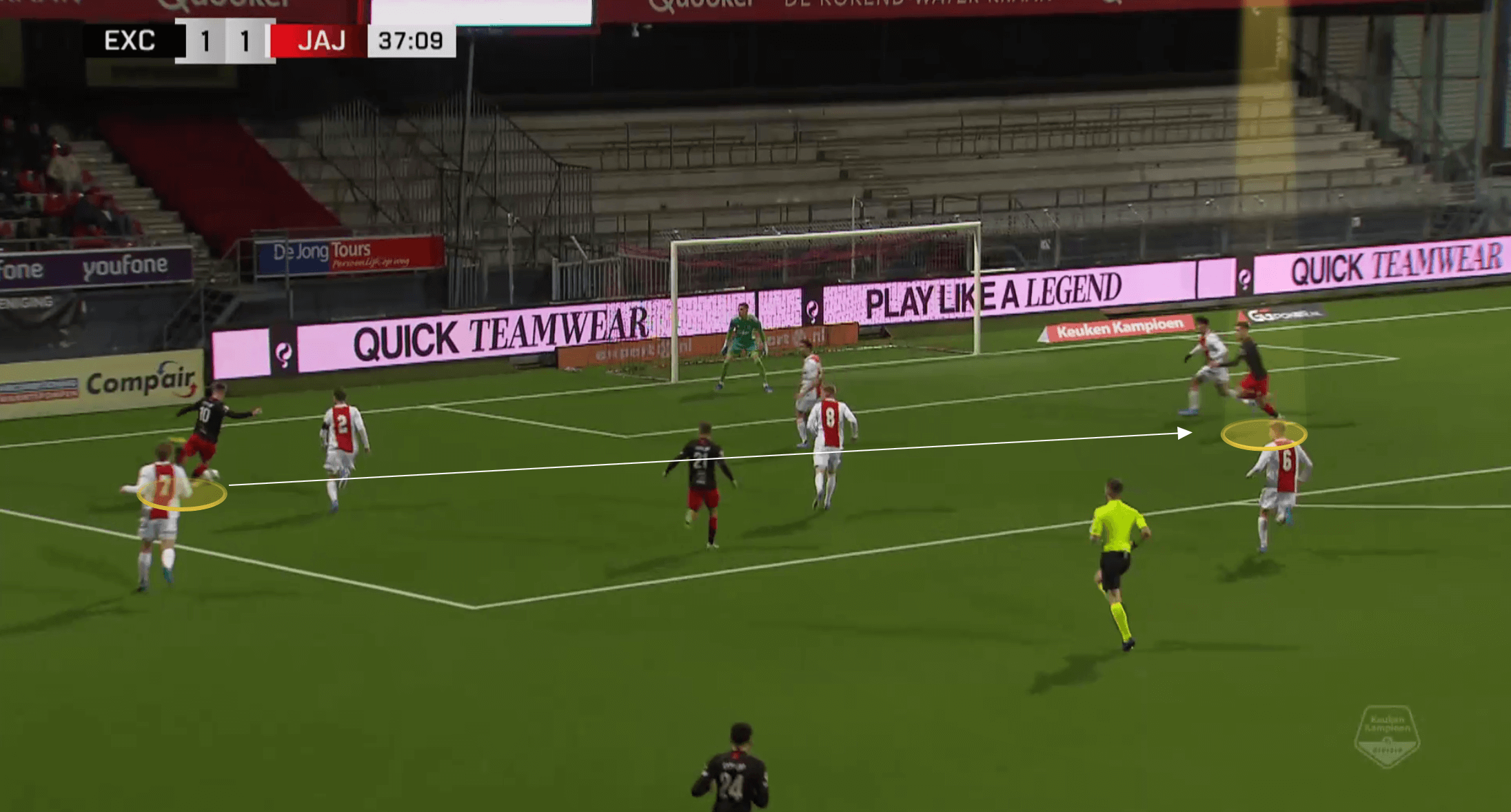 However, even if receiving under pressure inside the area, Dallinga shows a knack for not only getting shots away unexpectedly from tight angles or in crowded areas, but shows exceptional accuracy on top of this. 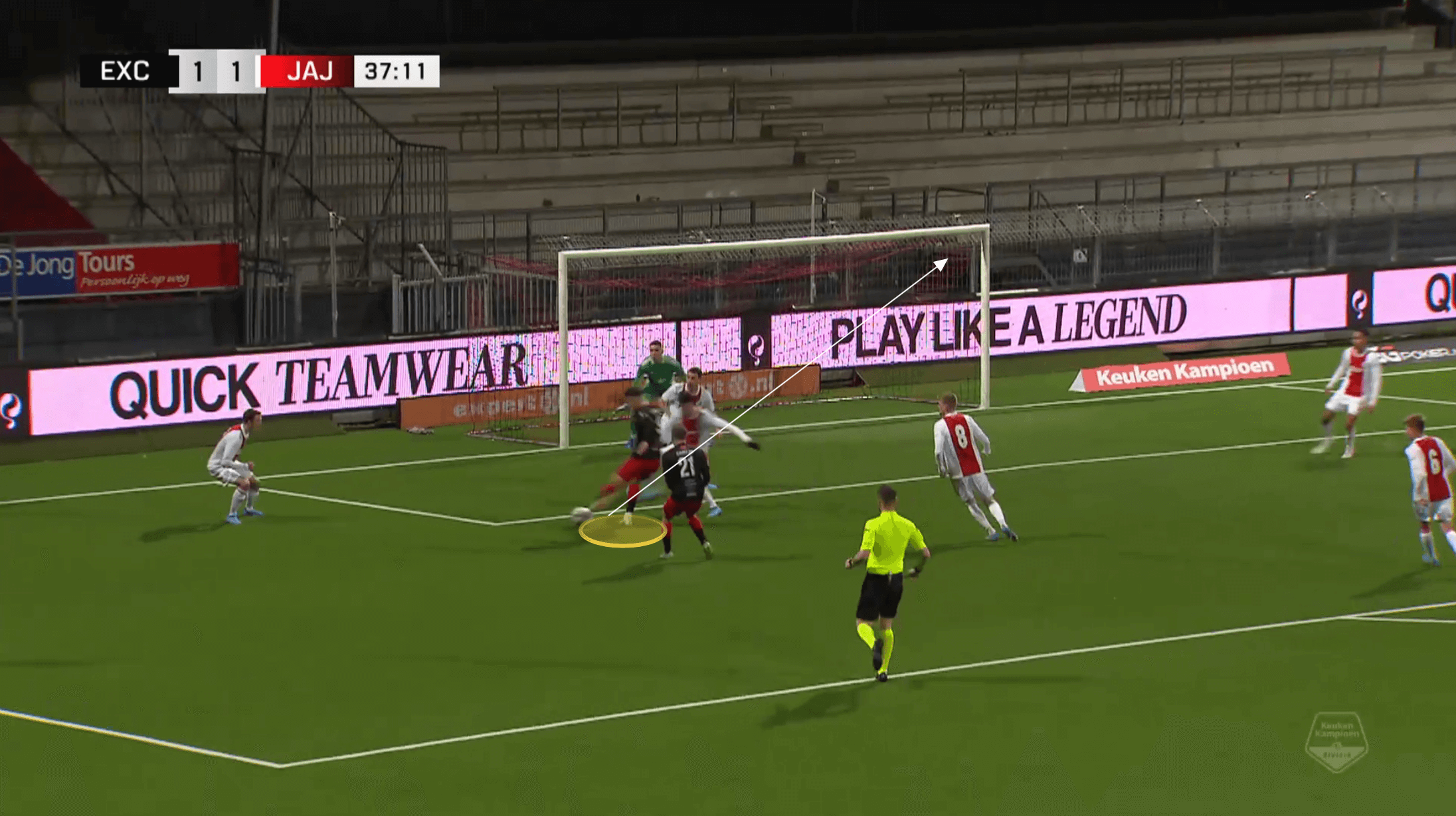 Given his six assists already this season it is fair to say that Dallinga has a creative streak and an eye for a decisive pass. He has averaged 1.58 passes to the penalty area with a 55% completion and 1.95 passes to the final third with a 62.2% completion rate on these.

With Dallinga regularly dropping in between the lines and into deeper positions he often finds himself in plenty of space where he dictates play from. He has a penchant for a long pass and shows impressive vision and execution on these passes.

The following two images show the kind of areas he will play them from as well as his overall accuracy and vision when striking the ball. 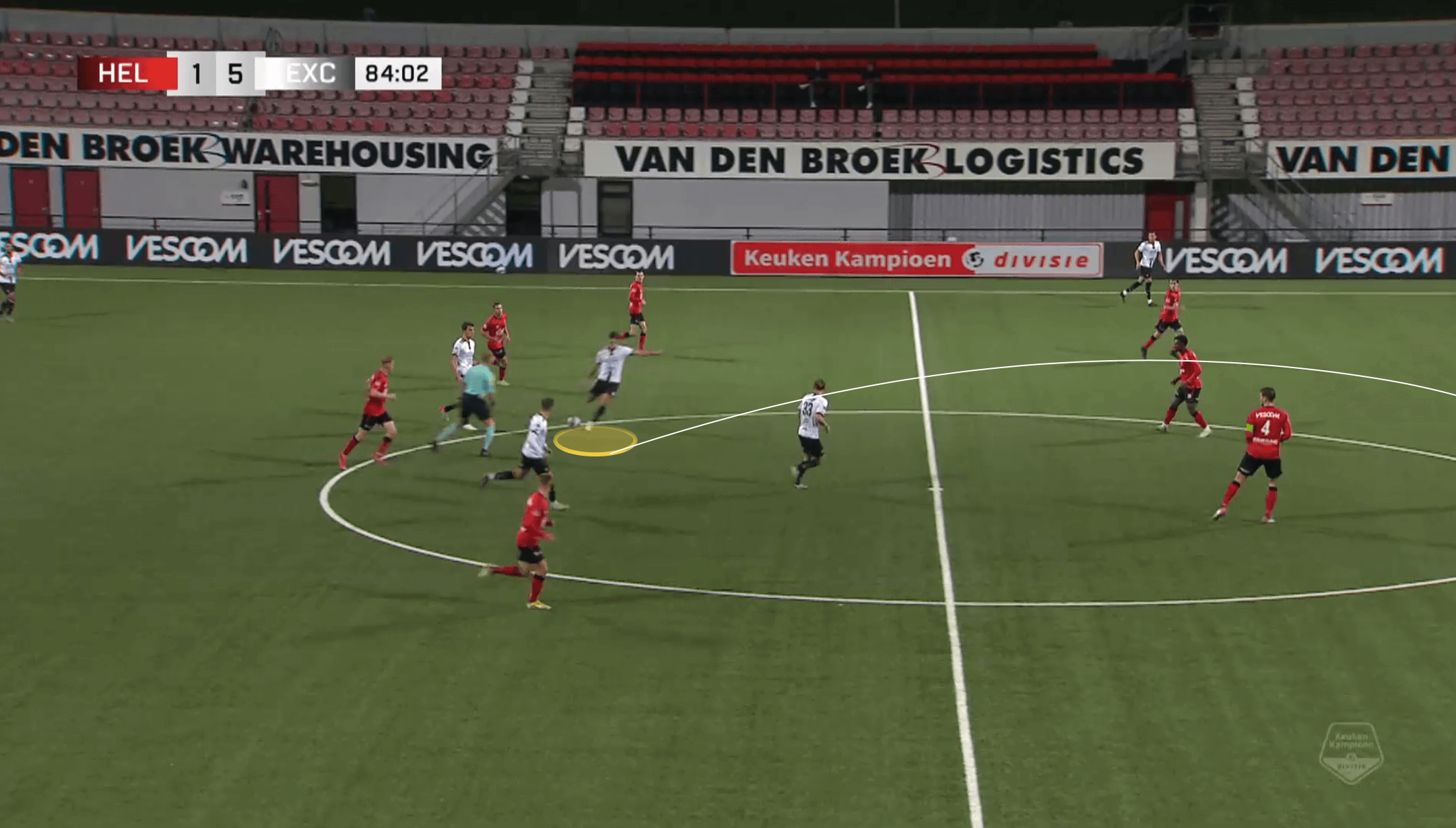 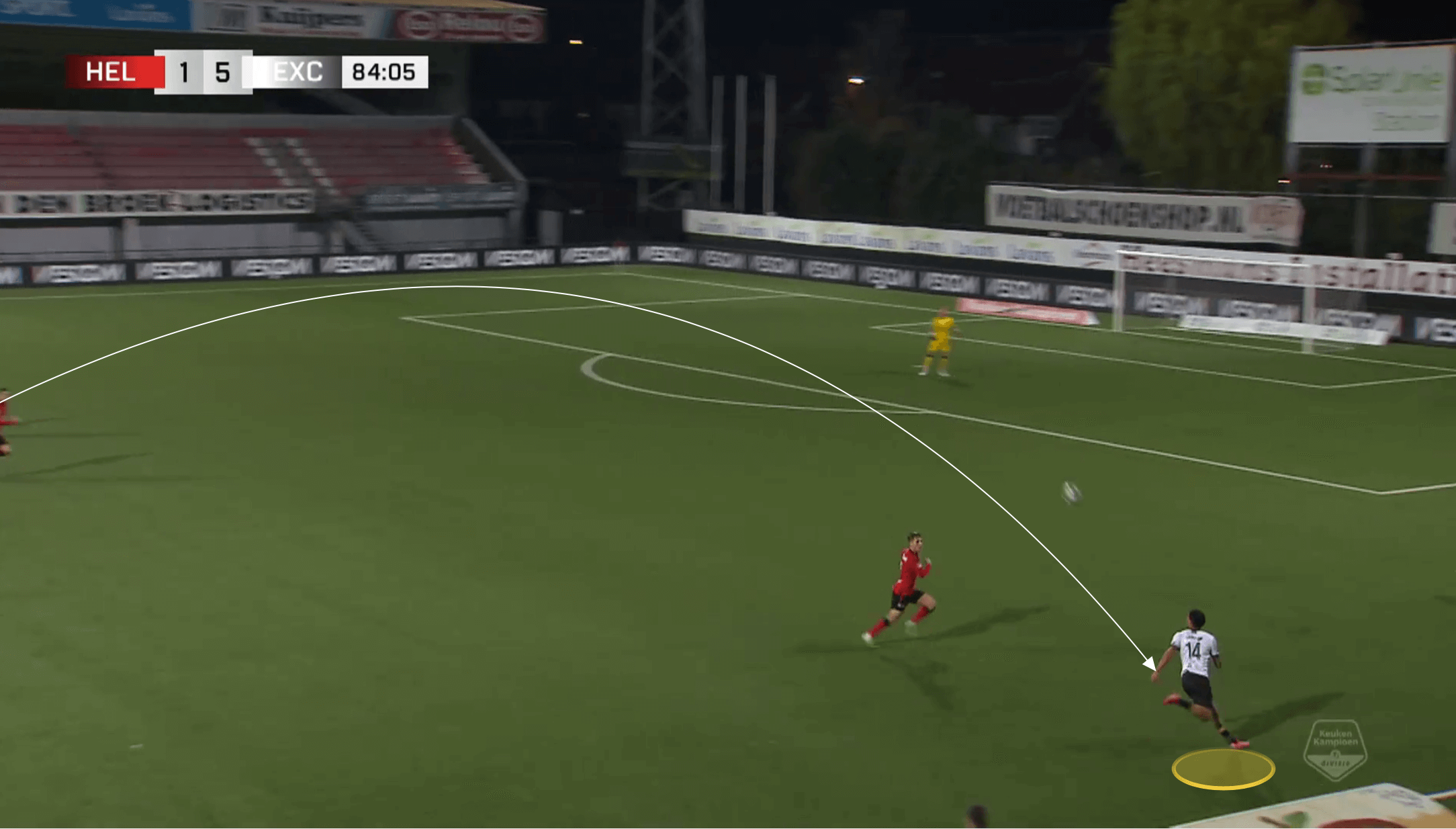 His overall awareness in the final third is excellent. Dallinga consistently scans and plays on the half-turn where possible. He will regularly scan as the ball is being played to him, assessing pass options but also pressure too. 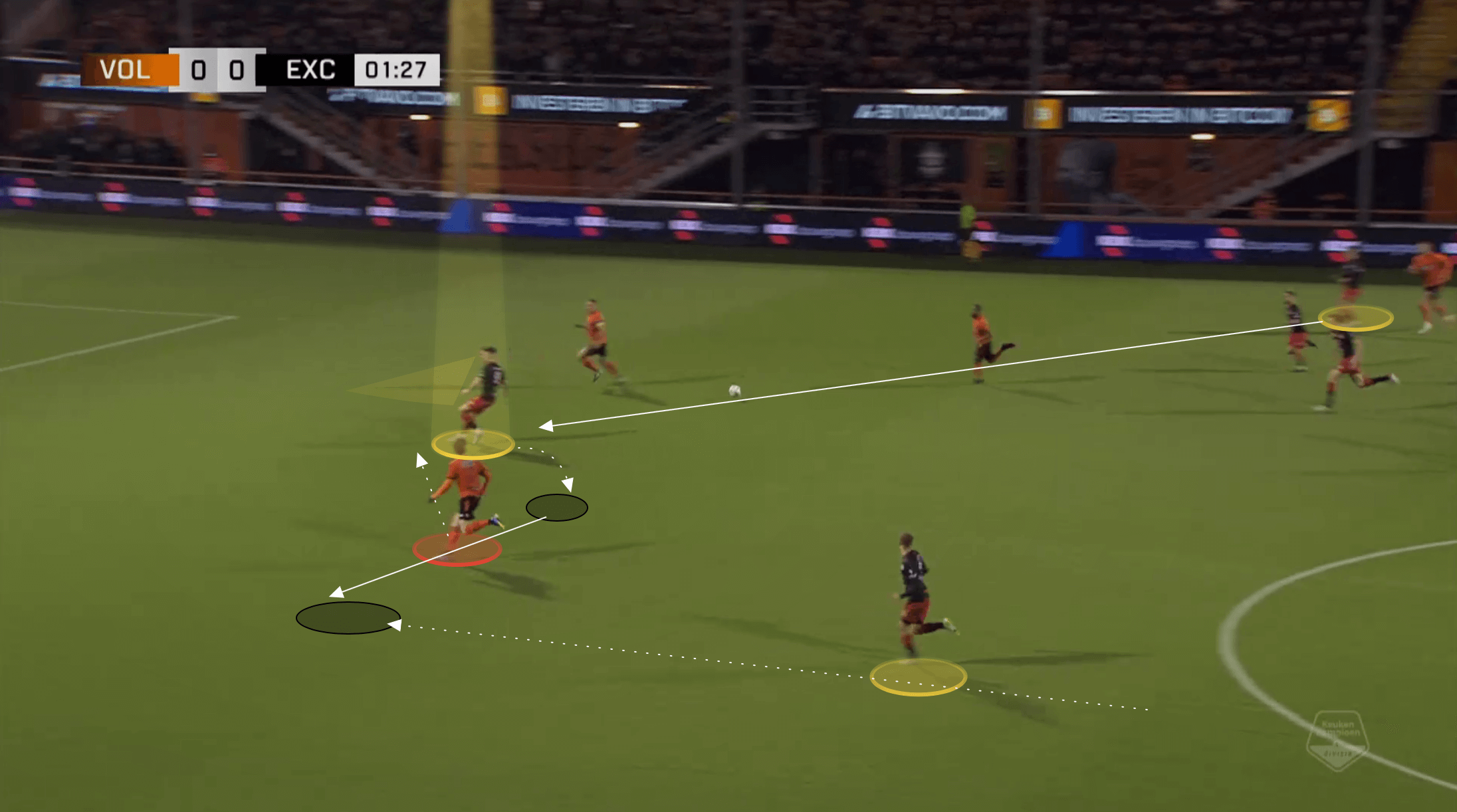 Dallinga’s execution in the final third is of a good quality as well. He is able to thread passes through tight gaps, whilst his accuracy and timing on these passes is exceptional too.

The following two images show him showing the awareness of a run towards the far post to slide the ball across goal, setting up his teammate in space, yards out from goal. 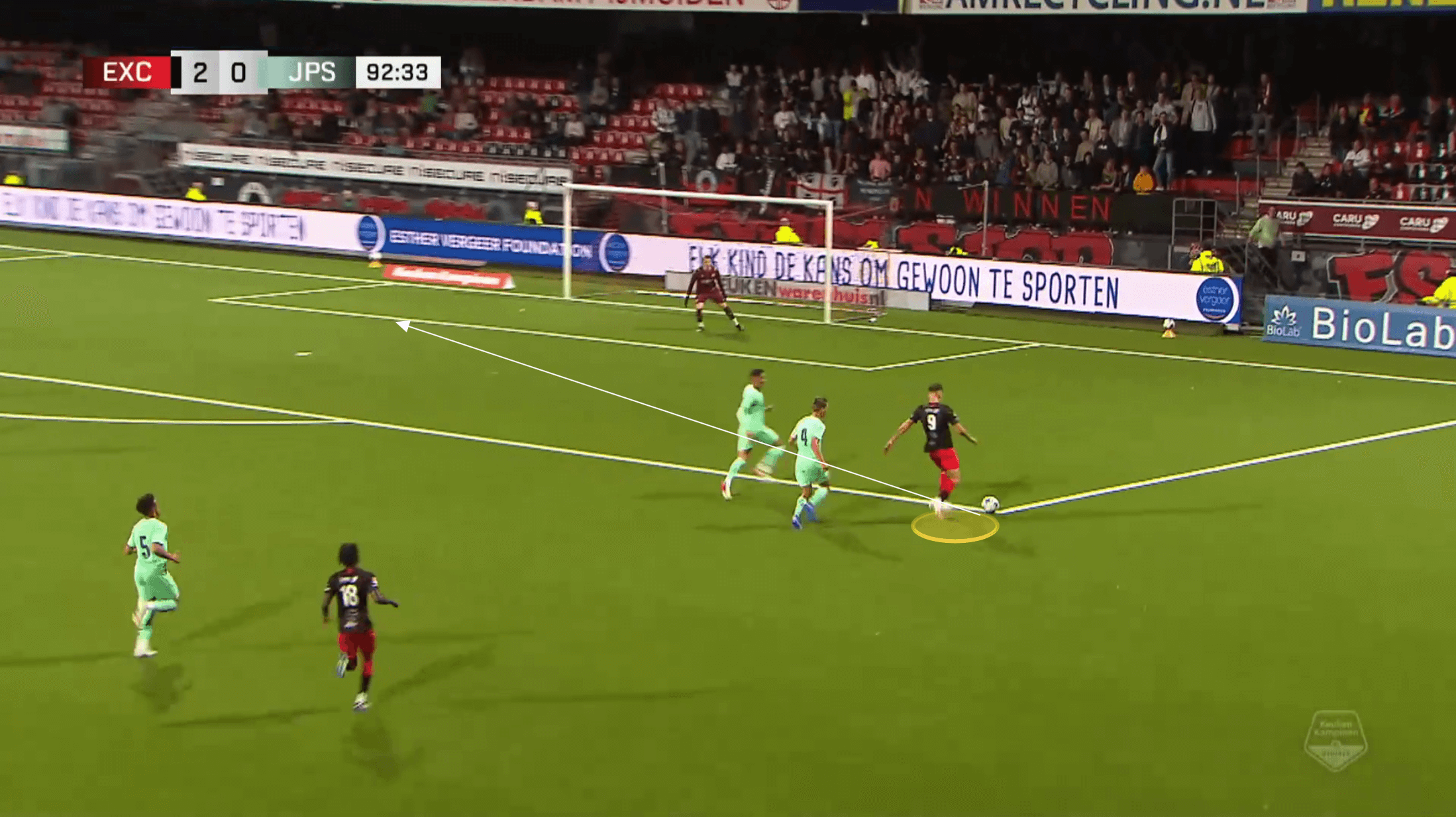 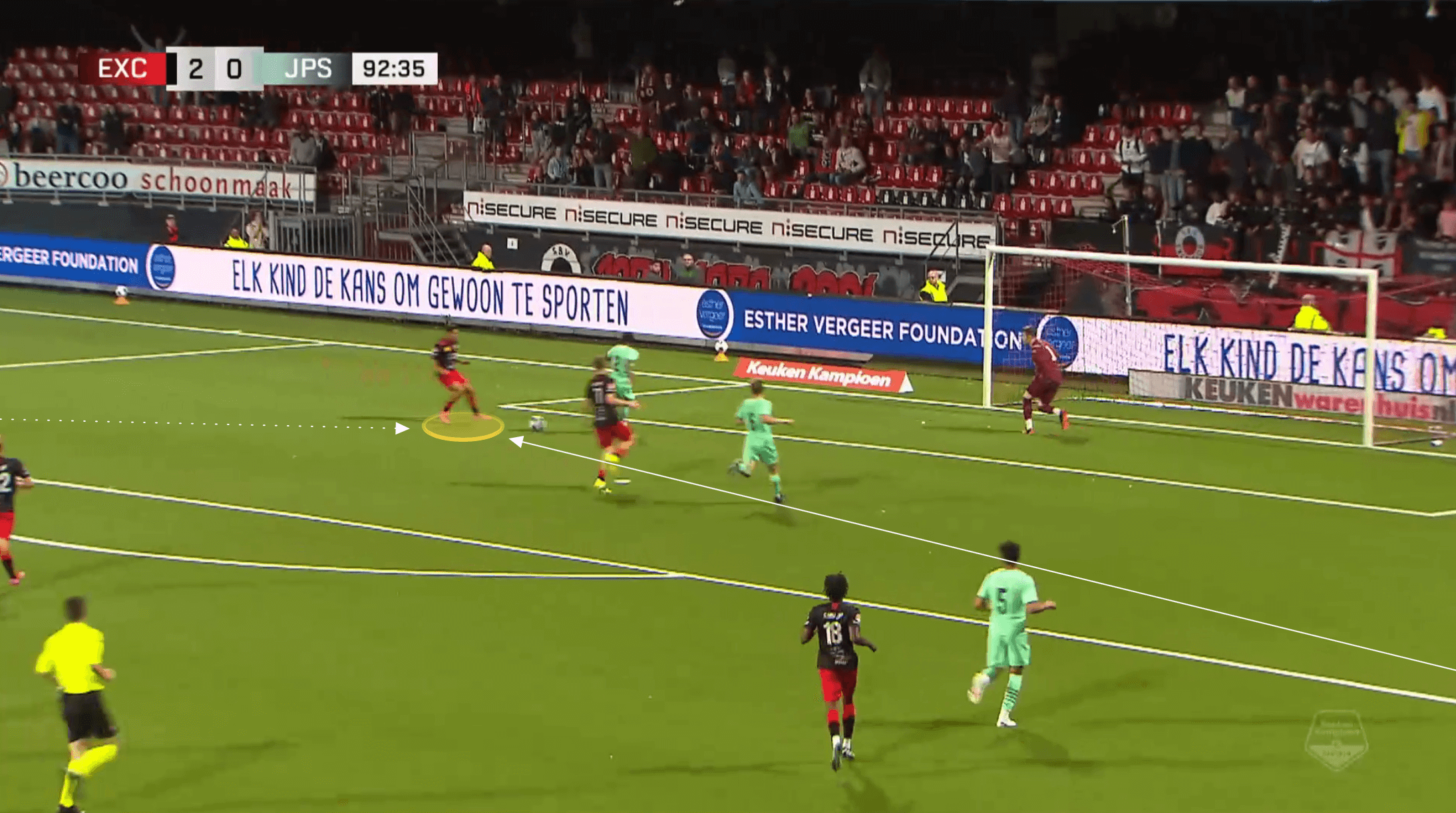 Given he has scored 31 goals already this season it won’t be surprising to hear he is very quick to recognise a shooting opportunity. However, he can be selfless in the final third too and is brave in attempting difficult through passes through tight areas. He times these passes and doesn’t overhit them. His assists come through this ability to place passes into the path of an onrushing teammate and allow them to take the shot on immediately. 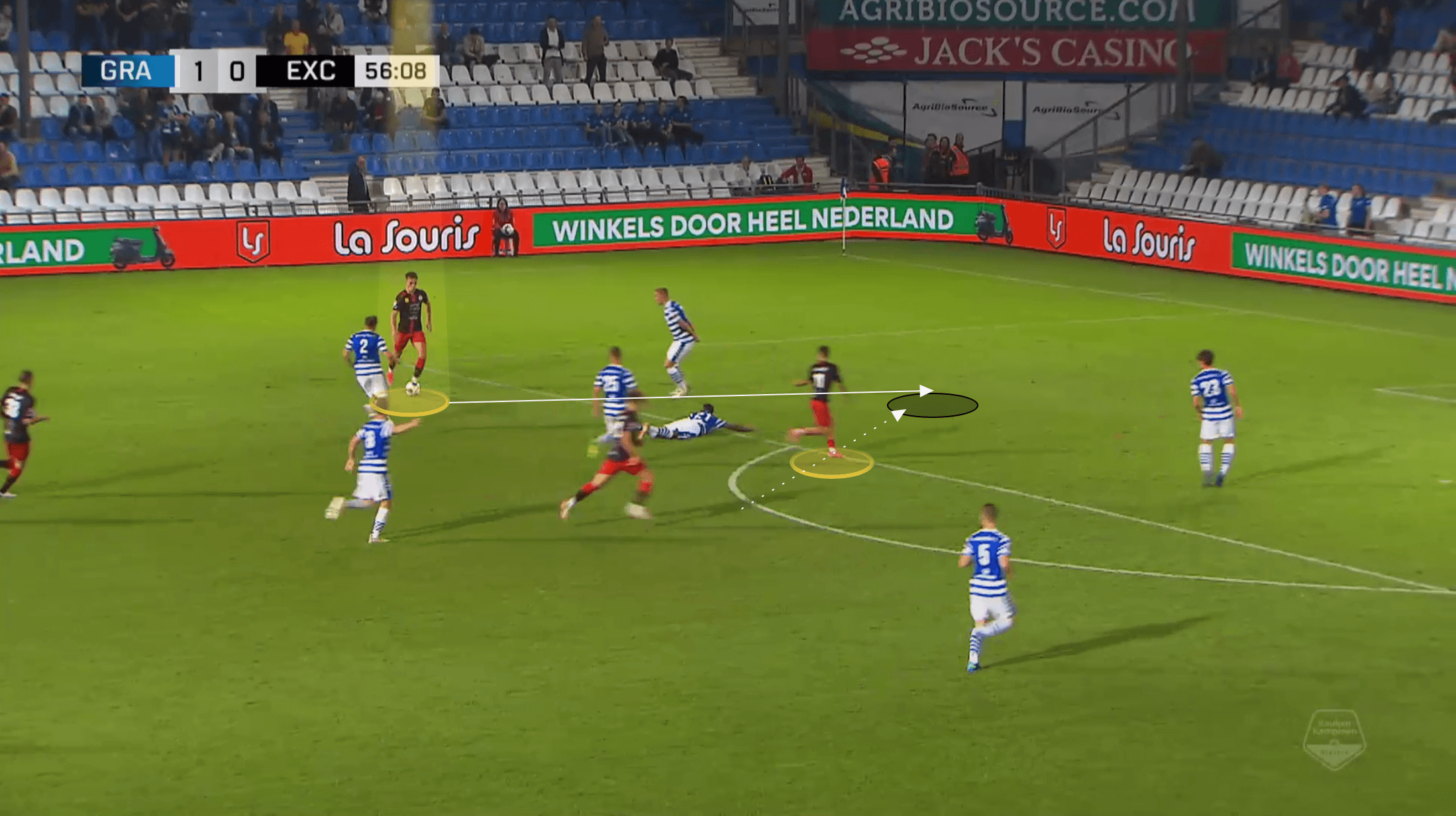 Below he drifts off the shoulder of his marker, firstly creating the space to receive. However, in doing this he then draws this defender over before sliding in his onrushing teammate arriving through the central channel. 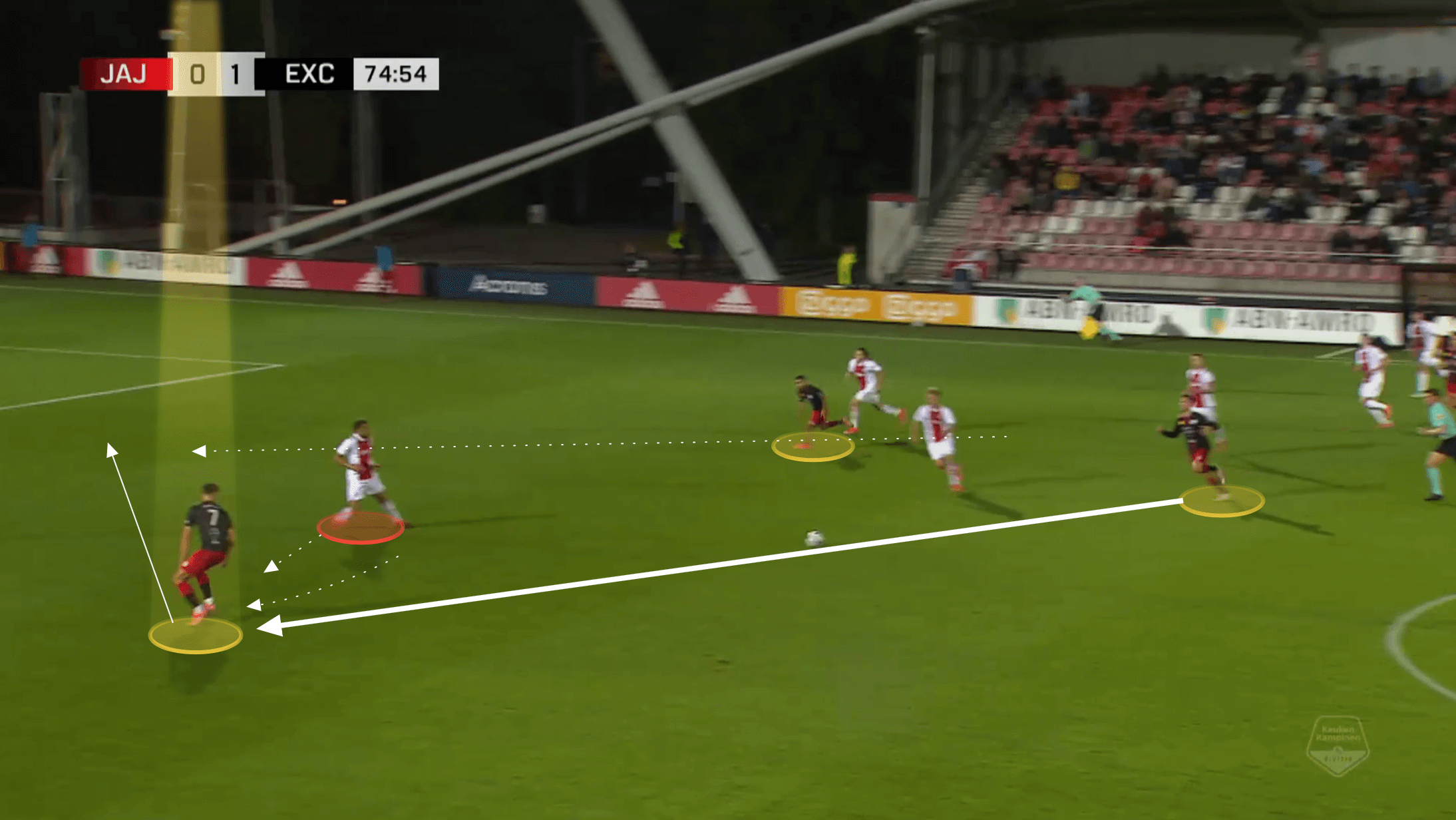 Dallinga’s accuracy when in front of goal is of the highest quality. Whilst he will undoubtedly find it more challenging to replicate his goalscoring tally this season at a higher level, his ability to consistently pick out the corners of the goal suggests that he will still be prolific.

He does need to improve some of his movement, but as already highlighted, he has a knack for still being dangerous in front of goal. He uses surprise and innovation and will score goals in situations where he wouldn’t be expected to.

We can see below, in a situation where he made his run too early and was therefore static before the cross came in, him using improvisation to still score. As the cross comes in and whilst being tightly marked, he is able to flick the ball behind him using the inside of his foot, and past the goalkeeper. 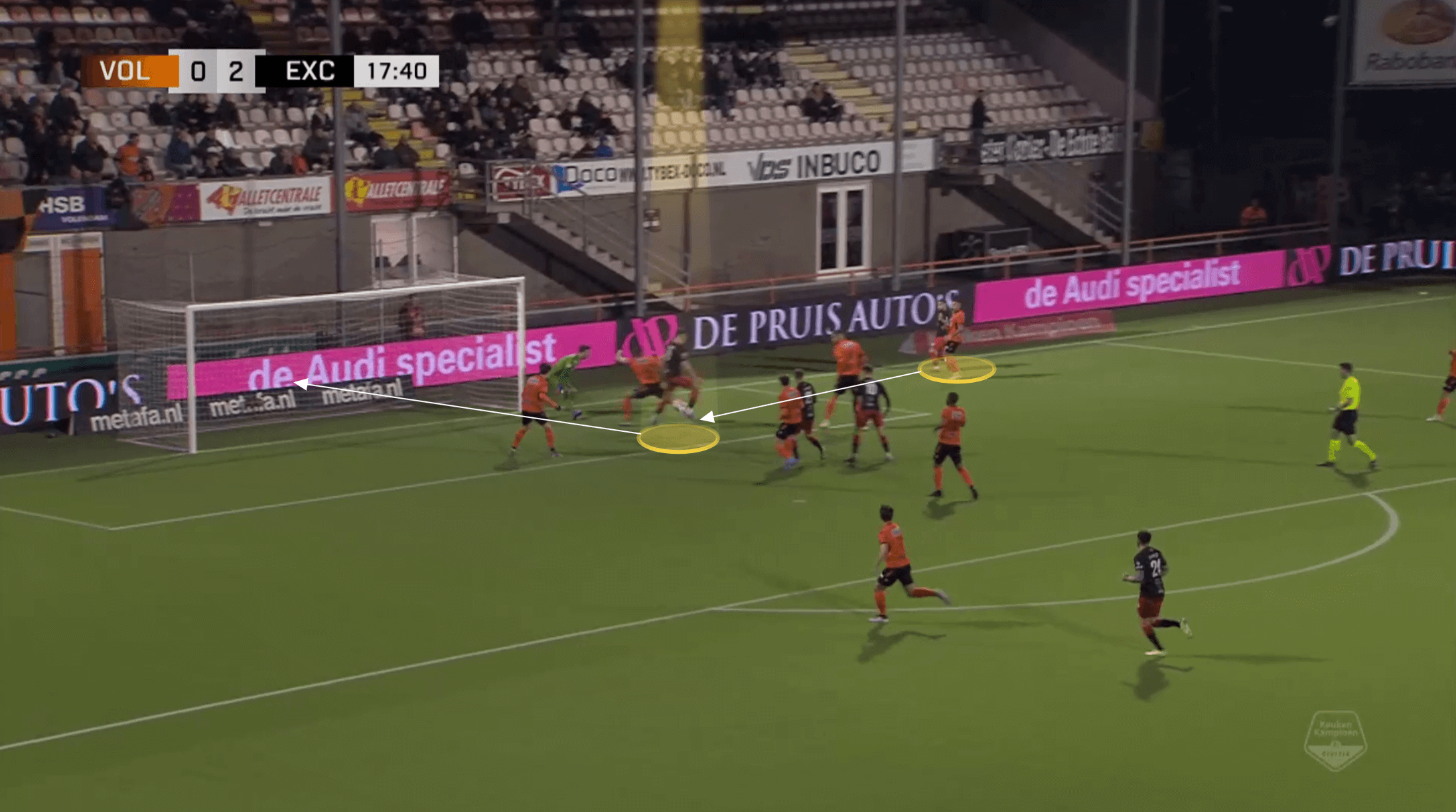 However, his movement isn’t poor and there are times where he can thrive, particularly on fast breaks where there is space behind the defence to move into. We can see him doing this in the following set of images, using his movement to create an easy chance in front of goal.

As the through pass is played in behind and his marker’s attention is diverted towards the ball, Dallinga quickly shifts backwards, drifting off of their shoulder. 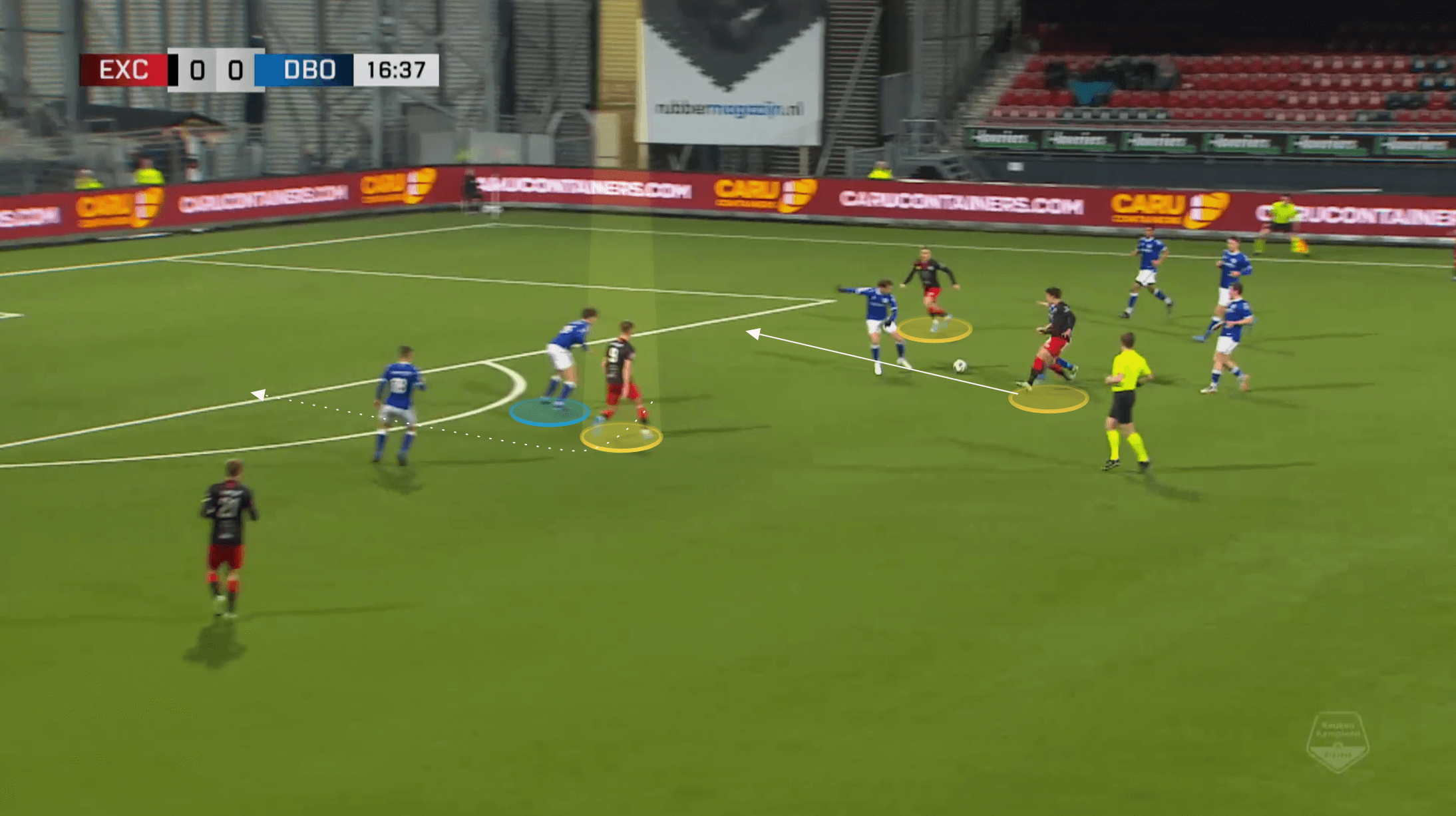 He is then able to find space to easily receive the ball across goal and finish in open space yards in front of an open net. 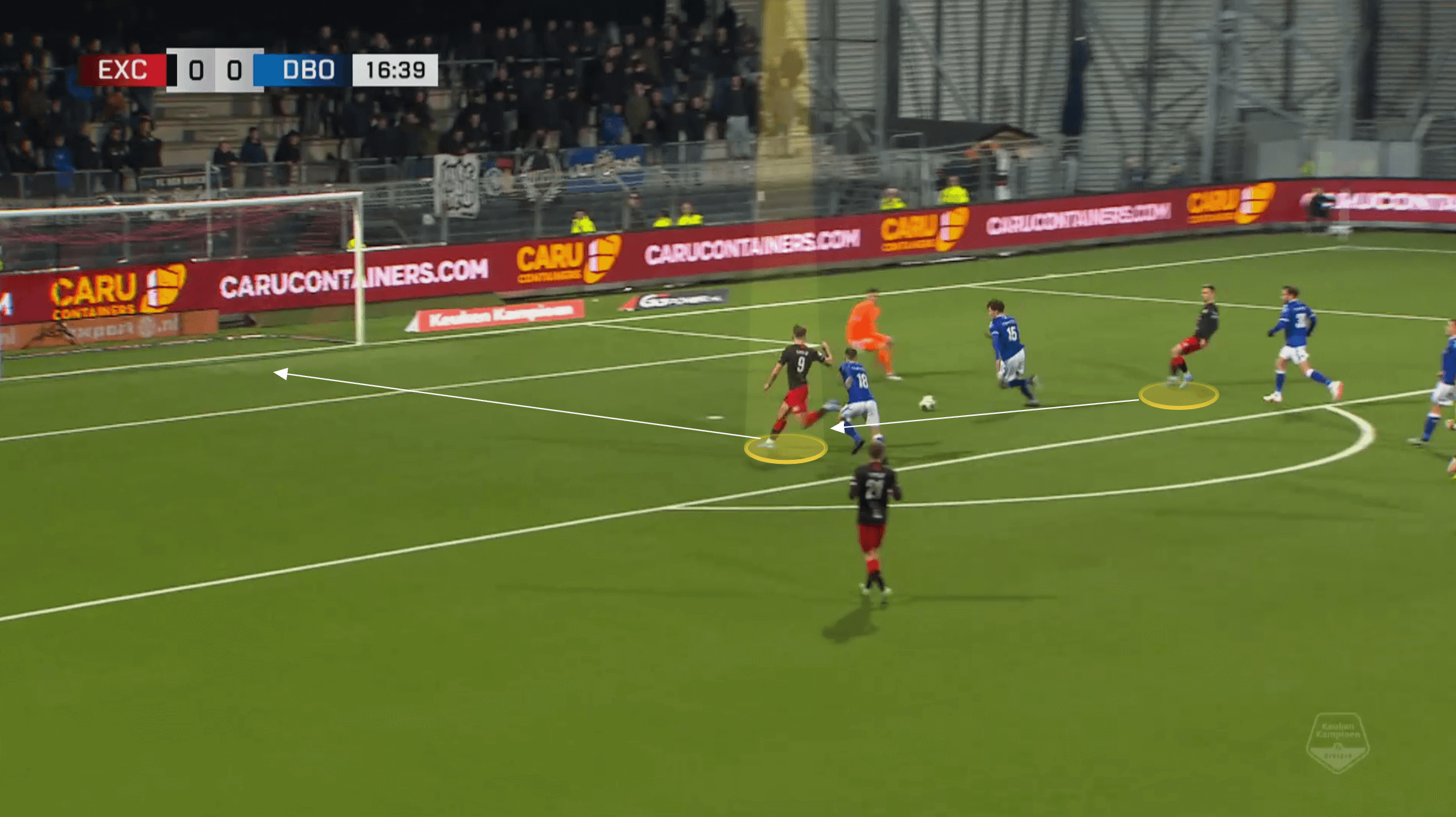 Again we can see him timing a run into the space behind a defence on a fast break in the next image. 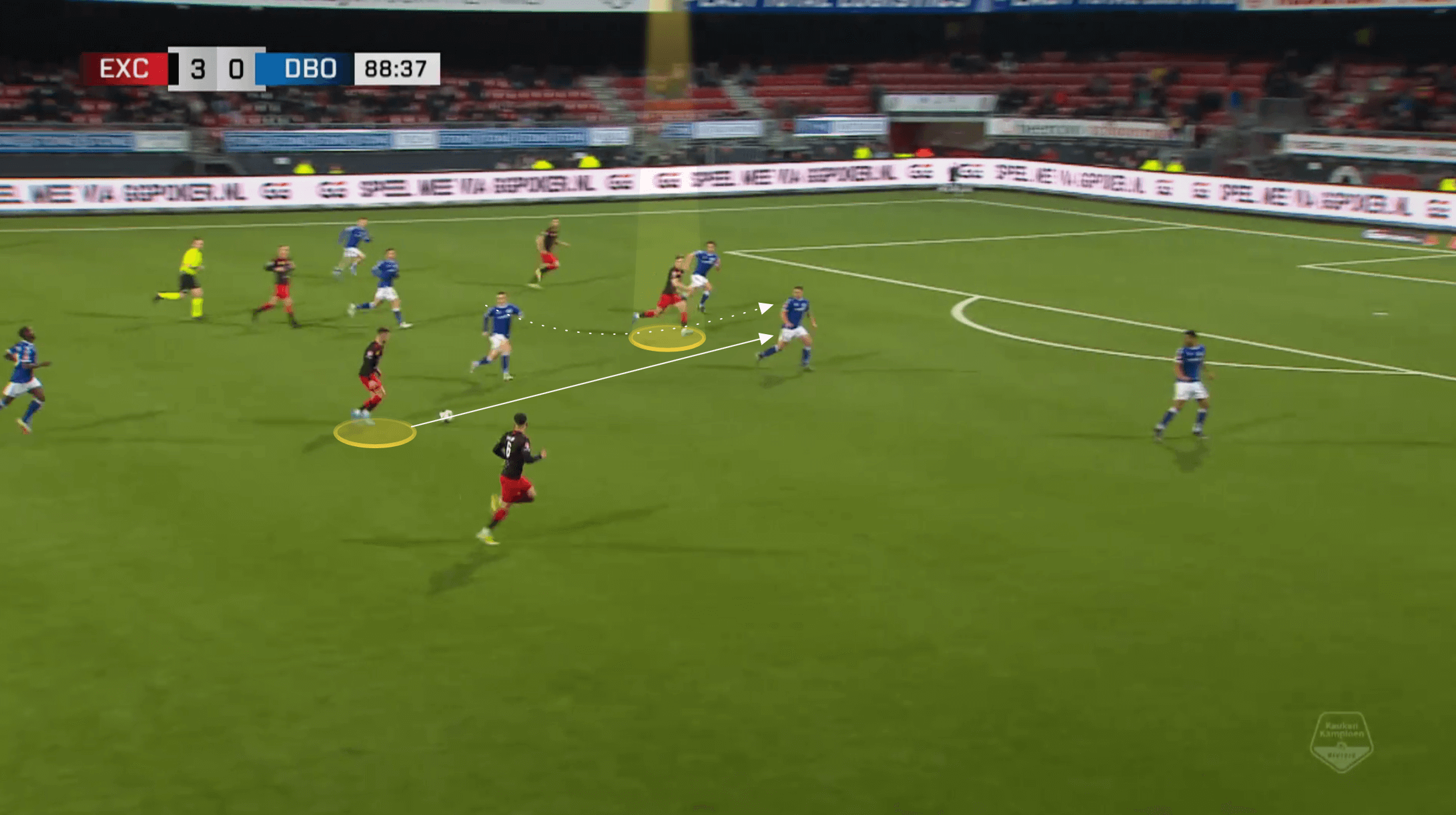 Dallinga’s awareness of pressure and where he needs to shoot or to dribble the ball in these moments is of the highest quality.

Recognising that he has pressure on his shoulder Dallinga decides to take the ball wide in this instance, narrowing his angle to goal, but taking the ball away from pressure and giving him time to pick a shot.

He is subsequently able to pick out the far post, with trademark pinpoint accuracy. 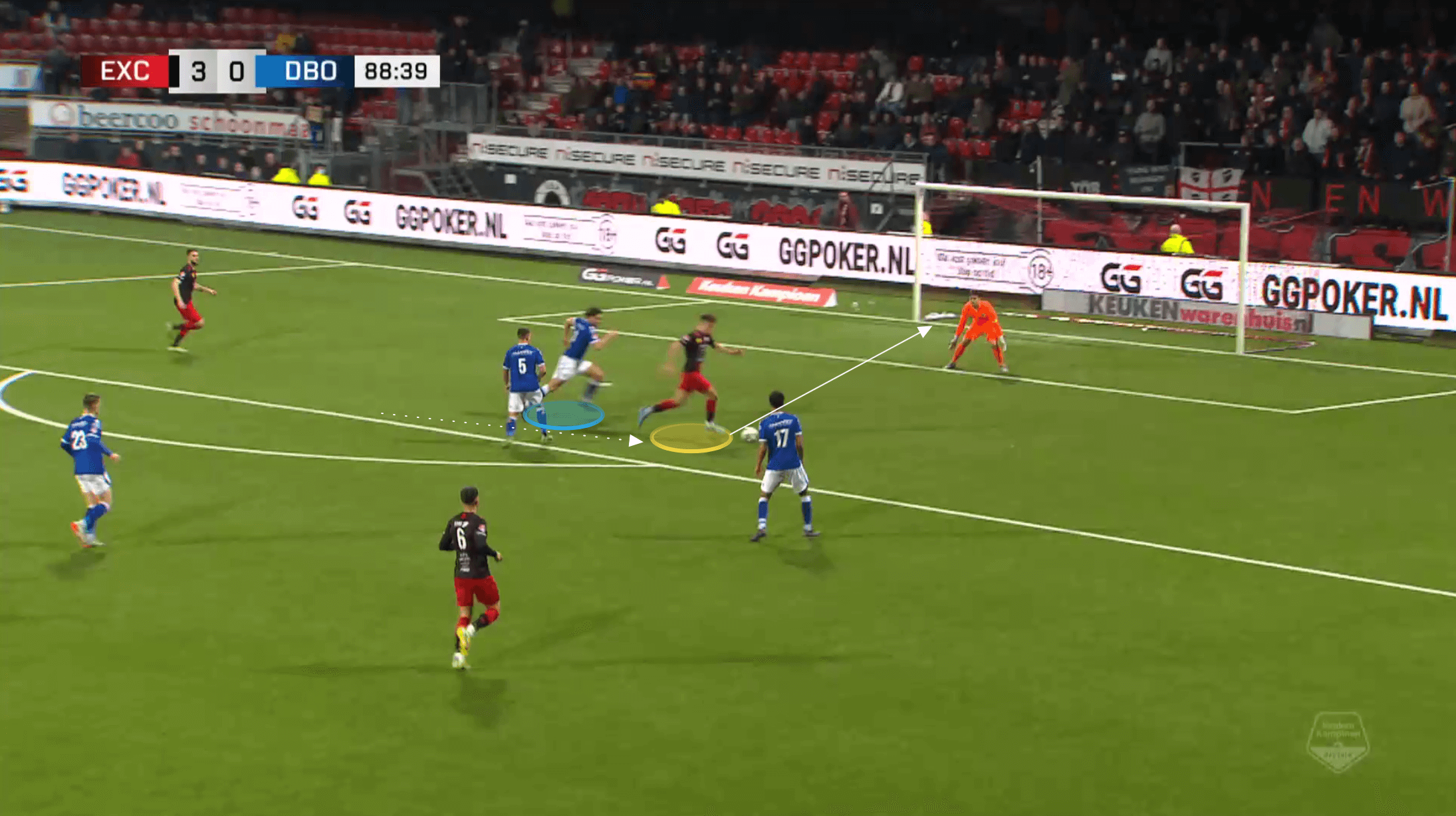 He will contribute with a few headed goals as well. Admittedly he isn’t the tallest but he has impressive spring and timing when competing aerially, and just as with his feet, he can show quality accuracy with his head.

Below we see him initially losing his marker to create a yard of space before perfectly timing his jump and placing the ball into the near post top corner – an unsaveable effort. 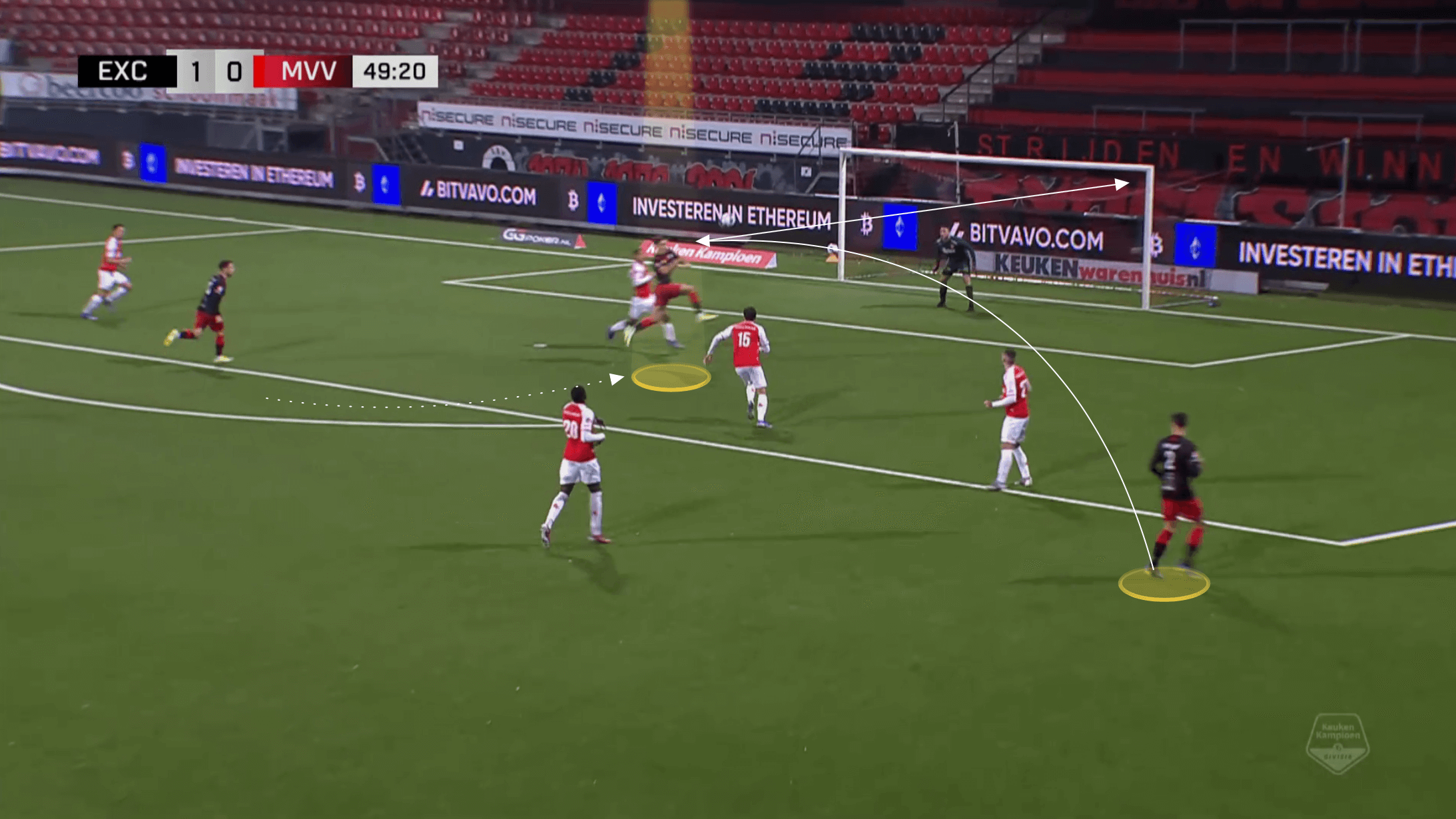 Dallinga’s goalscoring exploits will no doubt have peaked the interest of the strongest teams in the Eredivisie but there will also be lower-level teams in Europe’s top leagues monitoring him no doubt. Whilst he potentially needs some development physically and some fine-tuning with his movement, his overall play isn’t just to impact his side as a goalscorer. Teams that value someone who can consistently find space in deeper areas, impacting build-up play, and with the range and vision of passing that Dallinga possesses will be interested in him. Whilst he may remain in the Netherlands, there’s a good chance teams from other teams in Europe take a look at him too. Giorgios Giakoumakis’ move to Celtic in the SPL has been moderately successful, whilst Ligue 1 and the German Bundesliga may represent good landing spots for him to continue his development at a higher level.