Bundesliga 2021/22: Why RB Leipzig’s Christopher Nkunku is one of Europe’s leading attacking talents

Christopher Nkunku has started the season in truly electric form. The French attacker has already scored nine goals and notched three assists for RB Leipzig in 10 games across the Bundesliga, Champions League, and DFB Pokal.

Last season Nkunku scored seven and had seven assists, whilst the season before he had five goals and 12 assists. Whilst he still has some way to go before improving his assists tally, the fact he has already outscored his total from last season is highly impressive. It’s been a mixed start to the season for Jesse Marsch’s Leipzig, but Nkunku has been a standout not just in their team, but across the league as a whole.

This tactical analysis and scout report will provide an analysis on some of the key attributes Nkunku has in his game that have allowed him to have such a positive start to the season and where he fits into Leipzig’s tactics.

Nkunku has predominantly been used as a winger this season. However, the Frenchman is truly versatile and since joining Leipzig he has played as a forward, a 10, as a central-midfielder and even as a full-back. Looking at Nkunku’s attacking data compared to other wingers from this season (who have played at least 300 minutes), we can see that Nkunku is unsurprisingly an outlier. He is strong across the board.

Firstly, in terms of cross completion, Nkunku makes a relatively low volume of crosses at 2.58 per 90, however, this is still above the average for this data set. What’s most impressive is his completion though, with an outstanding 59.44% completion. Only Borussia Dortmund’s Hannes Wolf and Bayern Munich’s Leroy Sane have a better completion – albeit both attempt fewer crosses. 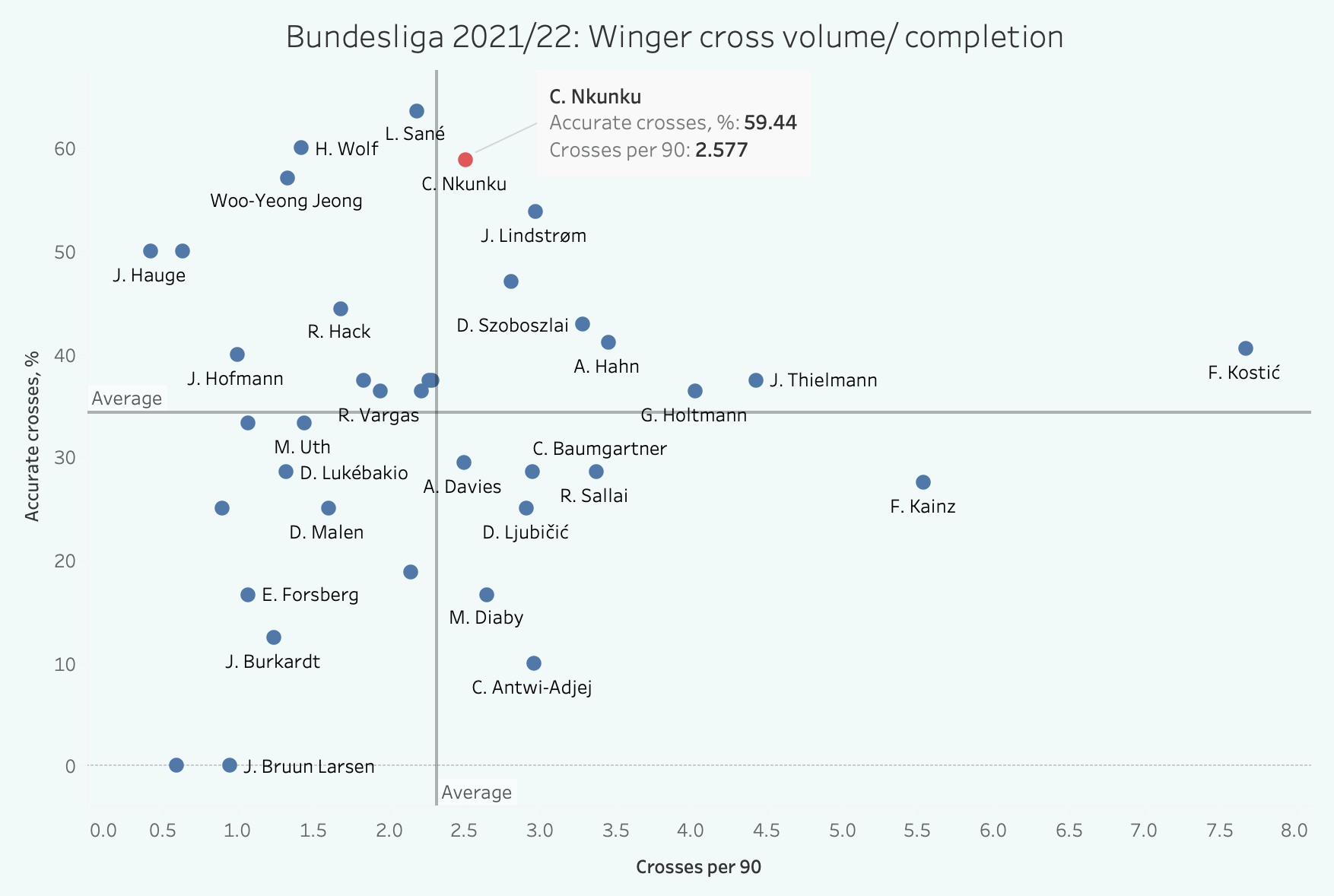 Nkunku performs similarly when it comes to dribbles as well. His 4.22 dribbles per 90 are actually slightly lower than the average, however, only just and it is still a respectable volume. Yet Nkunku’s 61.7% completion is again one of the highest in the league amongst other wingers. Only notoriously prolific dribbler Filip Kostic of Eintracht Frankfurt is attempting a high number of dribbles with a better completion. 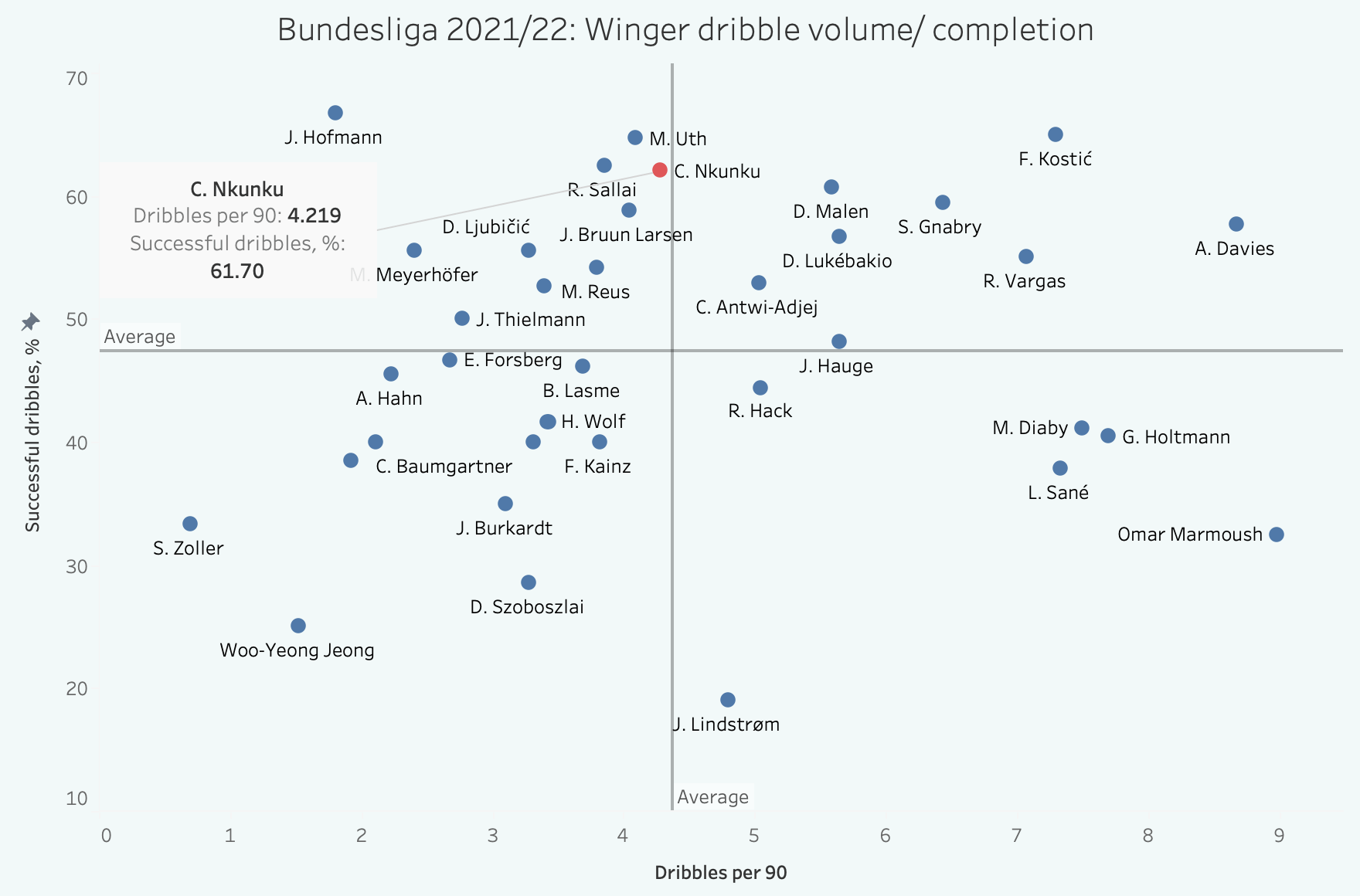 Nkunku stands out the most in the final third when in front of goal, both as a creator and as a goalscorer. Firstly, if we look at his expected values we can see Nkunku ranks well above the average for both expected assists and expected goals. 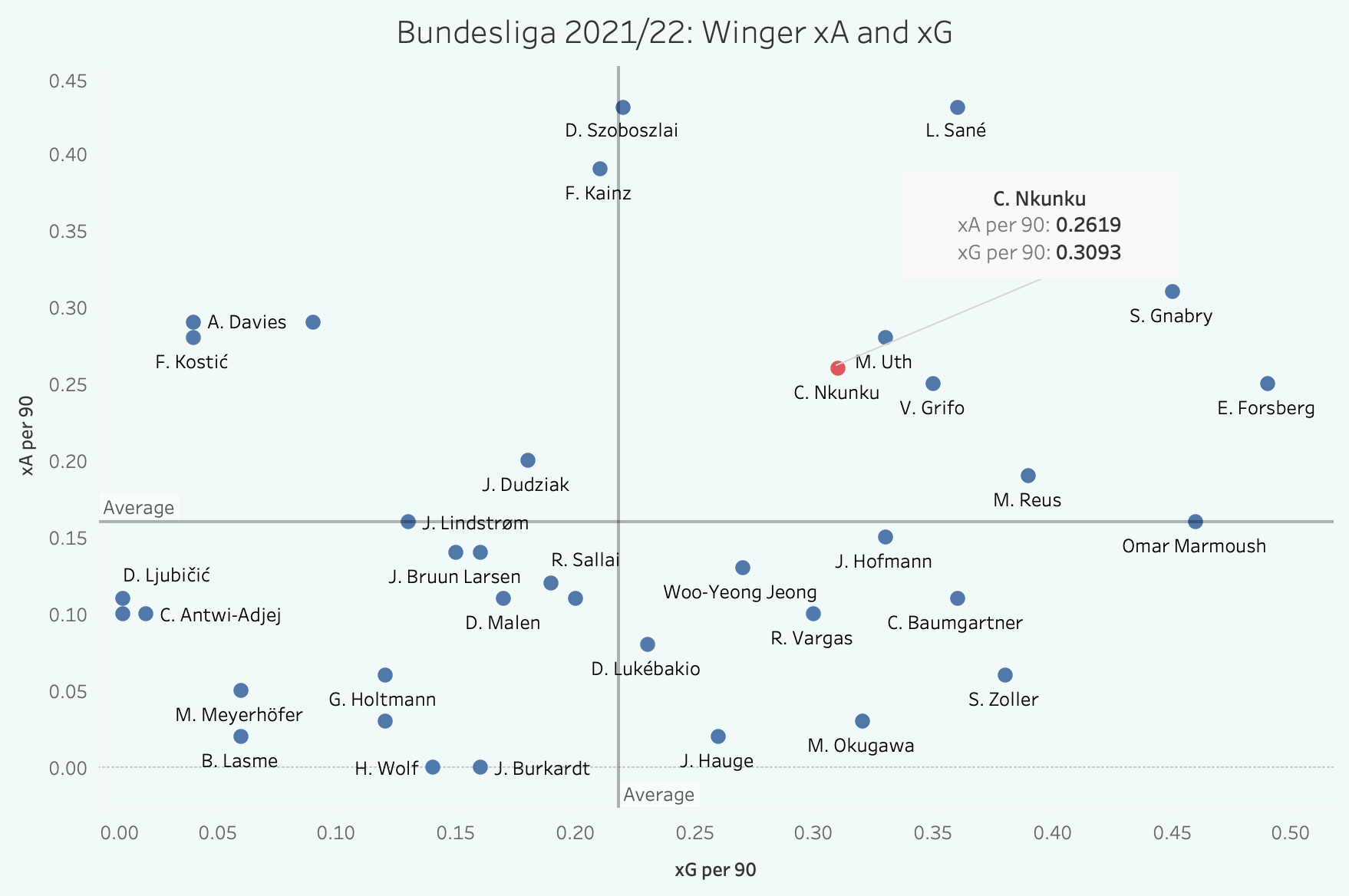 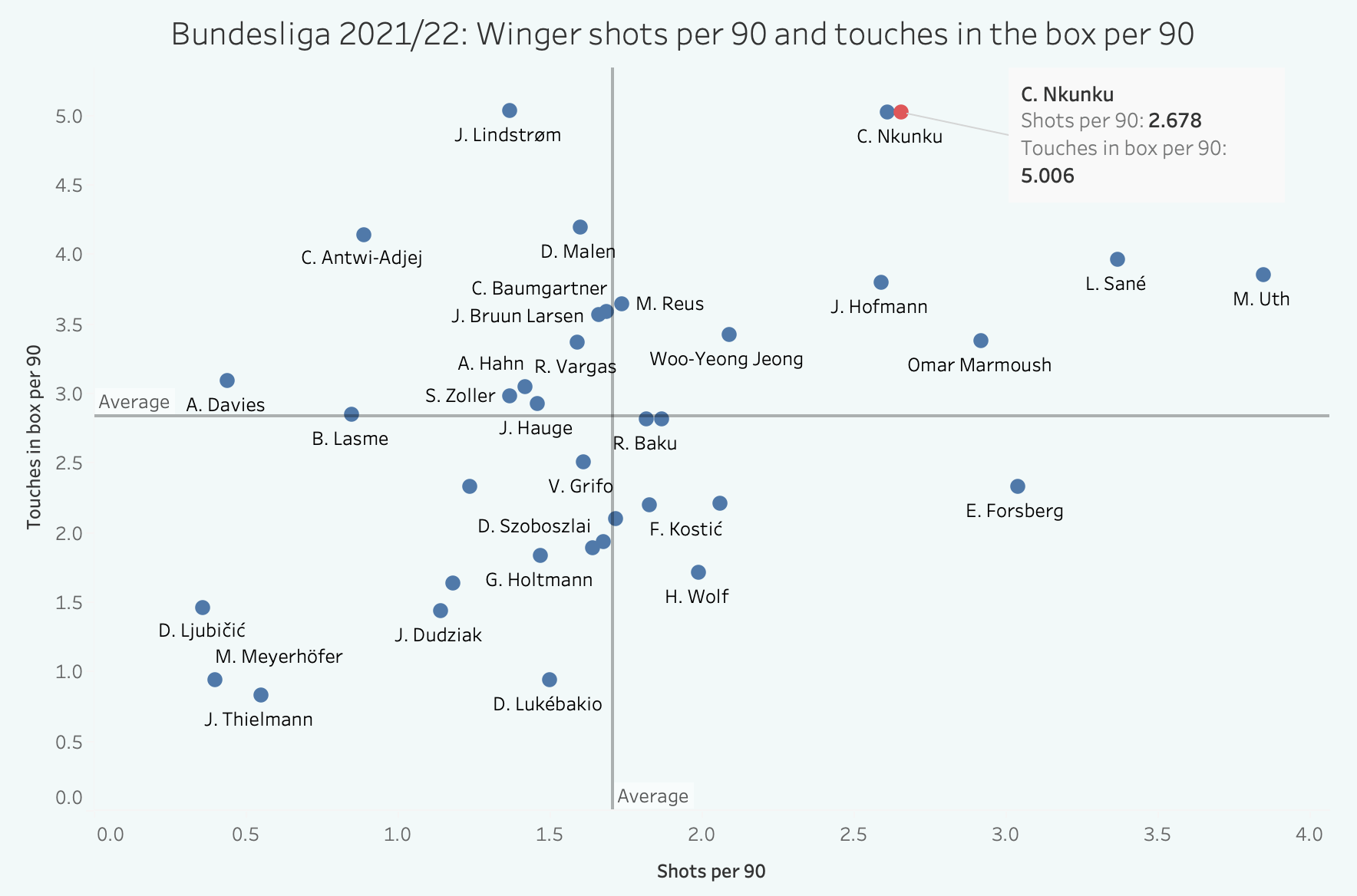 Positioning and movement in wide areas

Nkunku varies his positioning, switching between out wide, and central positioning. However, there are some consistencies for when he takes these positions.

Nkunku wants to ensure he leaves space behind the defence for him to receive through passes. He has excellent top speed and acceleration and when playing against a defence with a high line, as in the image below, Nkunku will look to angle a run in behind. To do so he takes a wide position, often looking to place himself in line with the last line of the opposition defence. 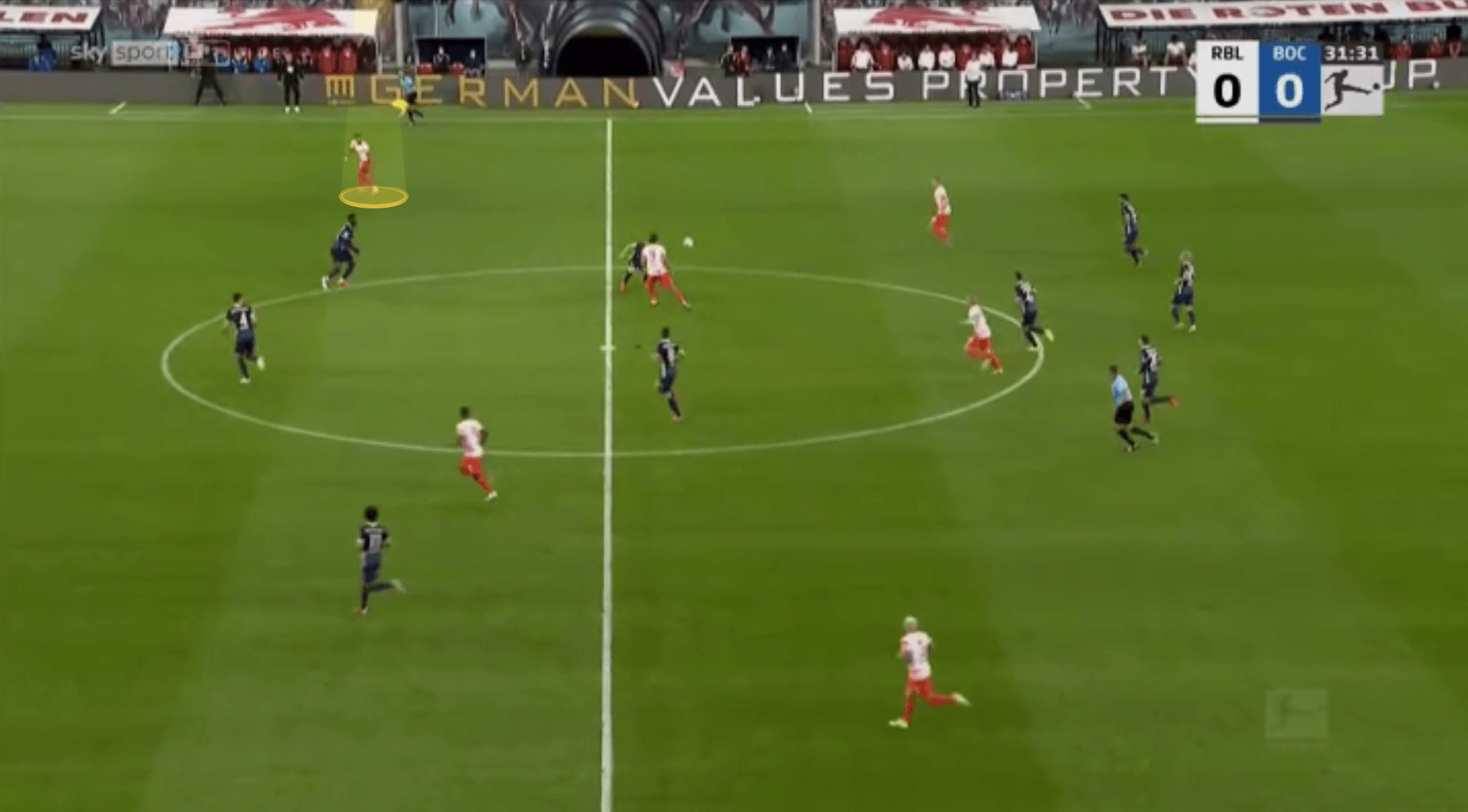 If he takes this wide position he will use the movement of his centre-forward teammate dropping into a deeper position to then angle his own run inside. If Leipzig look to build play down the opposite side of the pitch, Nkunku can stay wide and act as an outlet, but equally he can look to hit the inside space in between the opposition full-back and centre-back as he does in the image below. 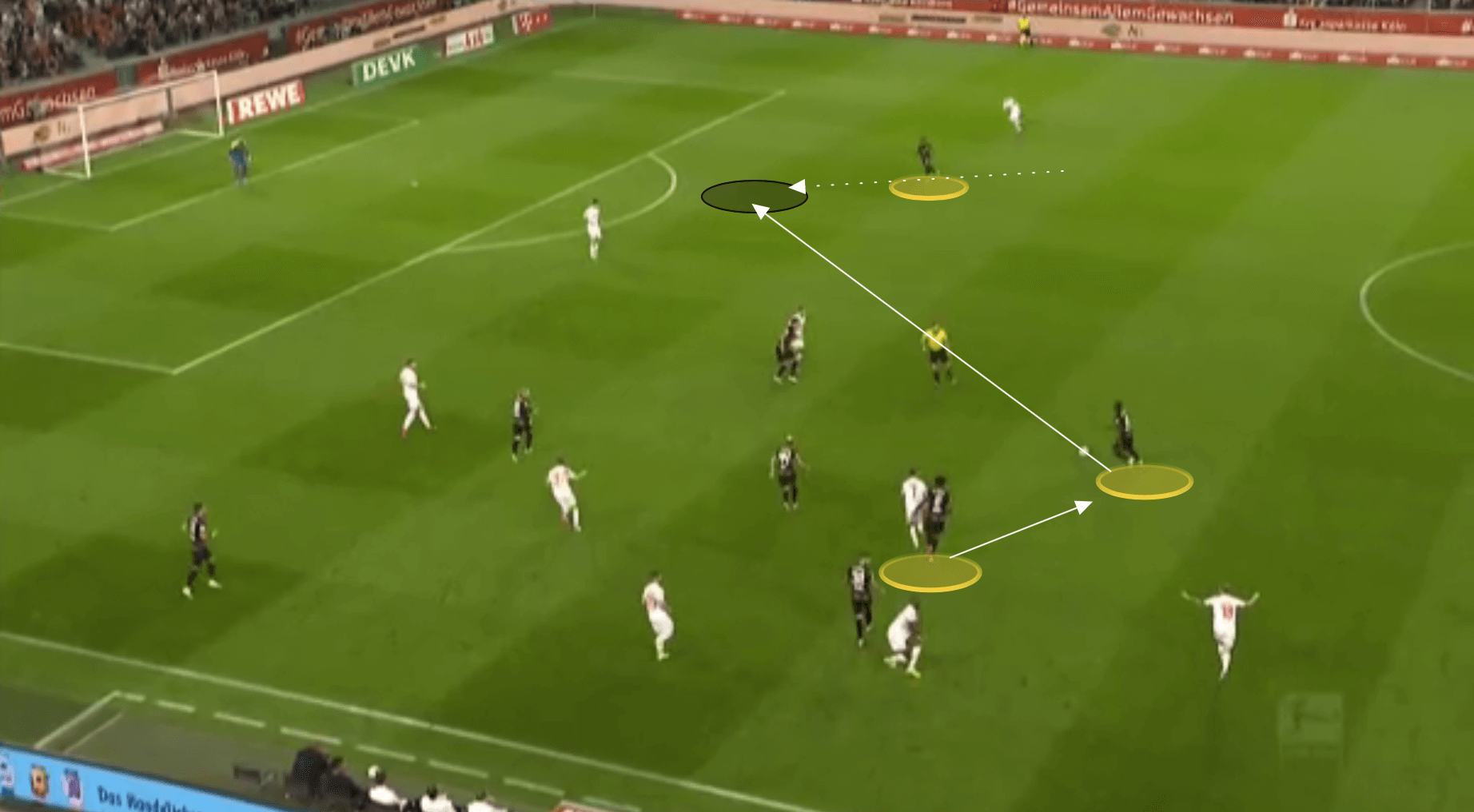 Nkunku is a threat from crosses, as has already been highlighted in the data section and will be shown in detail in a later section of this piece. His varied positioning between drifting into the middle of the pitch and staying wide means he can still be a goal threat and a creative threat from out wide. He shows intelligent movement in more congested situations. He will recognise the full-back being drawn out and will hit this space like in the image below, as he takes a more unconventional underlap route as the pass is played forward down his flank. 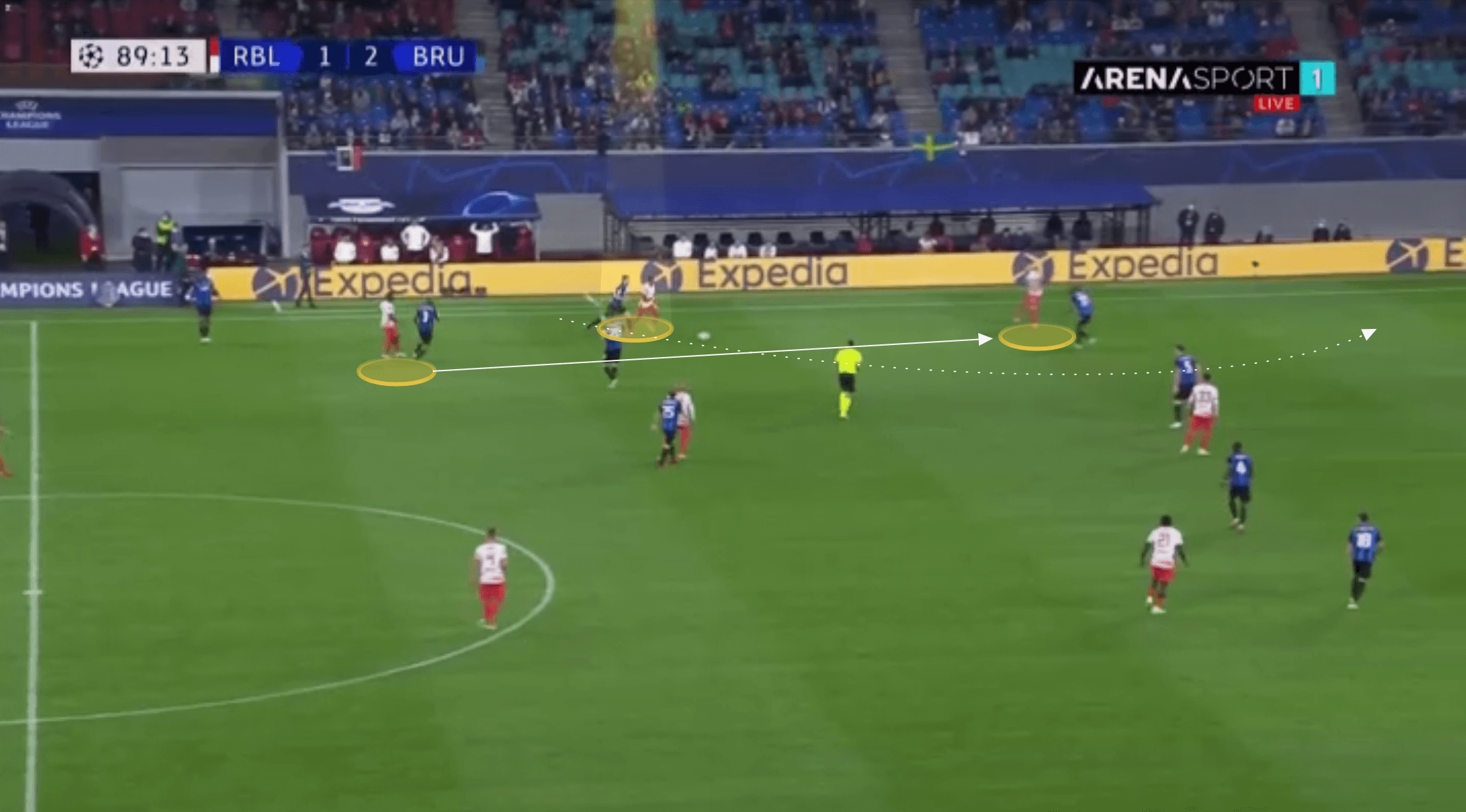 Creating goal-scoring chances for himself

Nkunku moves well inside particularly when the centre-forward positioned inside drops into deeper areas, as mentioned already. When this occurs he may look to hit the space behind the opposition centre-back. He doesn’t make the move too early and consequently stray offside, instead showing excellent timing in these situations. As we’ve seen so far this season, Nkunku is ruthlessly accurate when played in front of goal and finding himself in a 1v1 with the opposition goalkeeper. 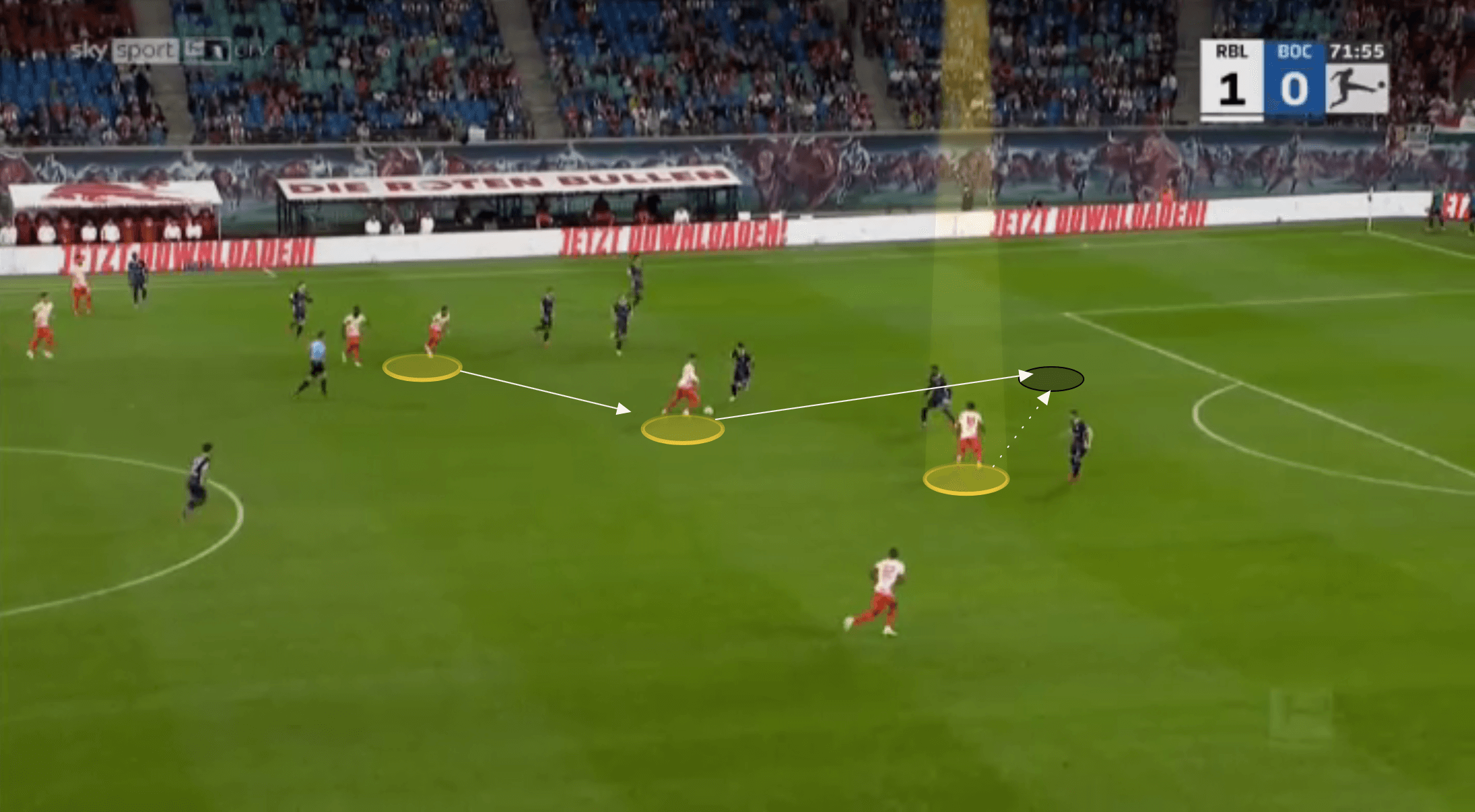 These chances don’t just occur when the centre-forward has possession either. Leipzig’s centre-backs will look to punch balls forward from deeper areas. In the example below, Yussuf Poulsen drops deep and his marker comes with him. Nkunku is in a more narrow position thanks to left-back Angelino’s high positioning down the left flank. He curves his run into the space vacated by Poulsen where he can latch onto the through pass. 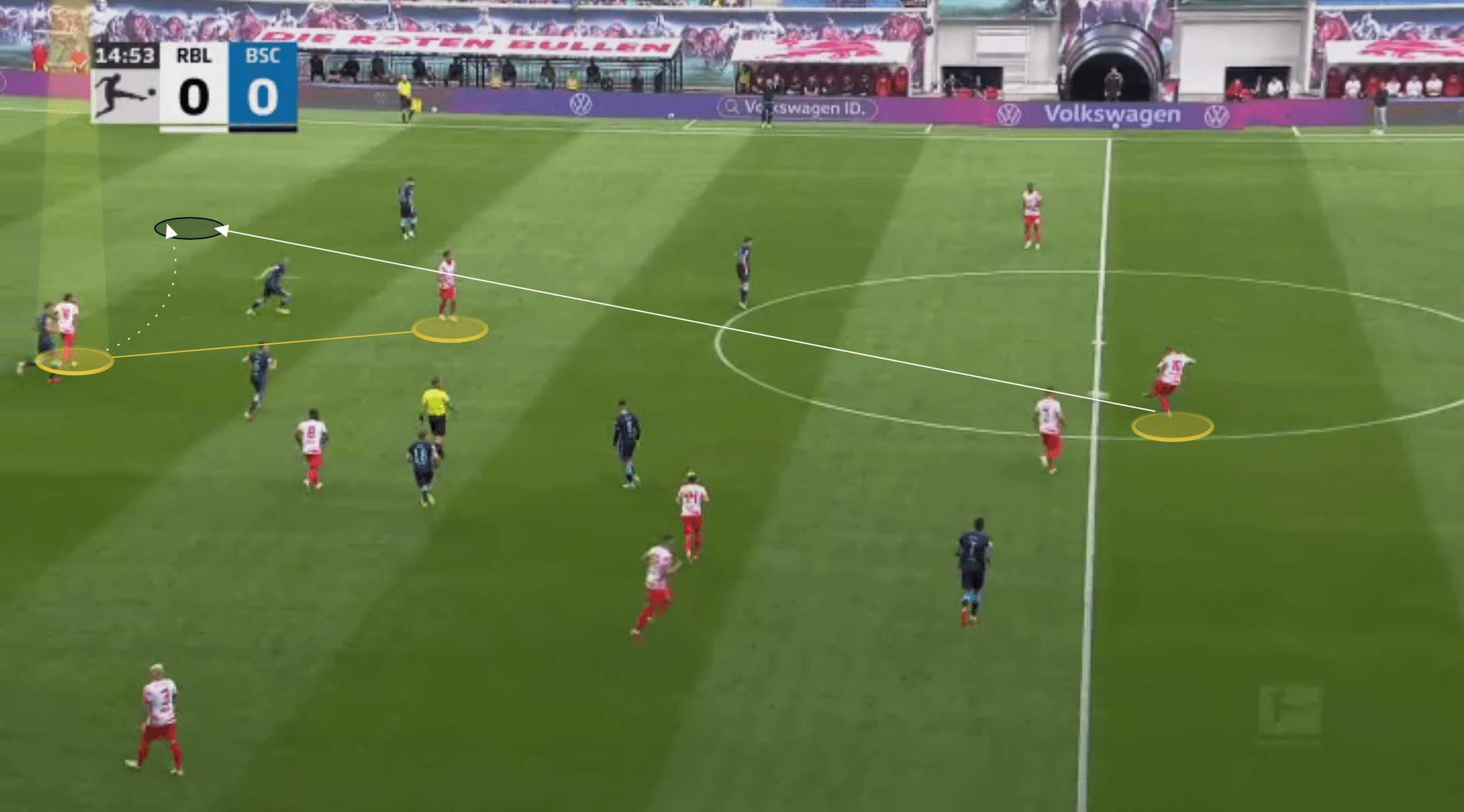 Nkunku instinctively fills spaces, and when moving inside into central positions he is able to hit any room between the defenders as and when it appears.

Below Andre Silva is the centre-forward this time and as the ball is in midfield he makes a run away from the action, drawing Manchester City centre-back Nathan Ake away from his teammate Ruben Dias. We can see in the image below how the pair are initially incredibly compact, with Nkunku lingering just off of his centre-forward teammate. 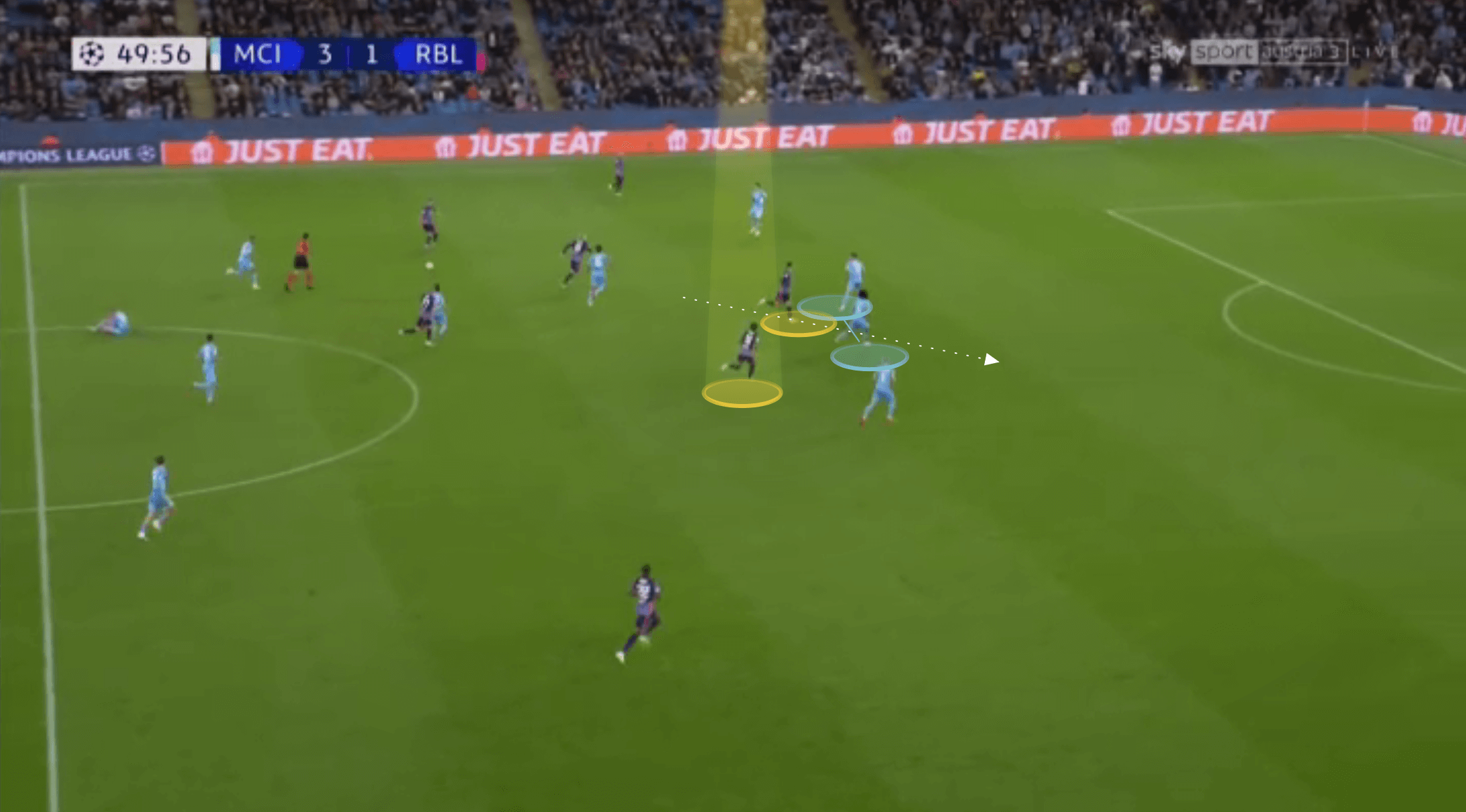 As the ball is advanced, Andre Silva still remains in a position towards the back post. Nkunku is able to make a late run in between the two City centre-backs where he meets the cross and heads home his second goal of the game. 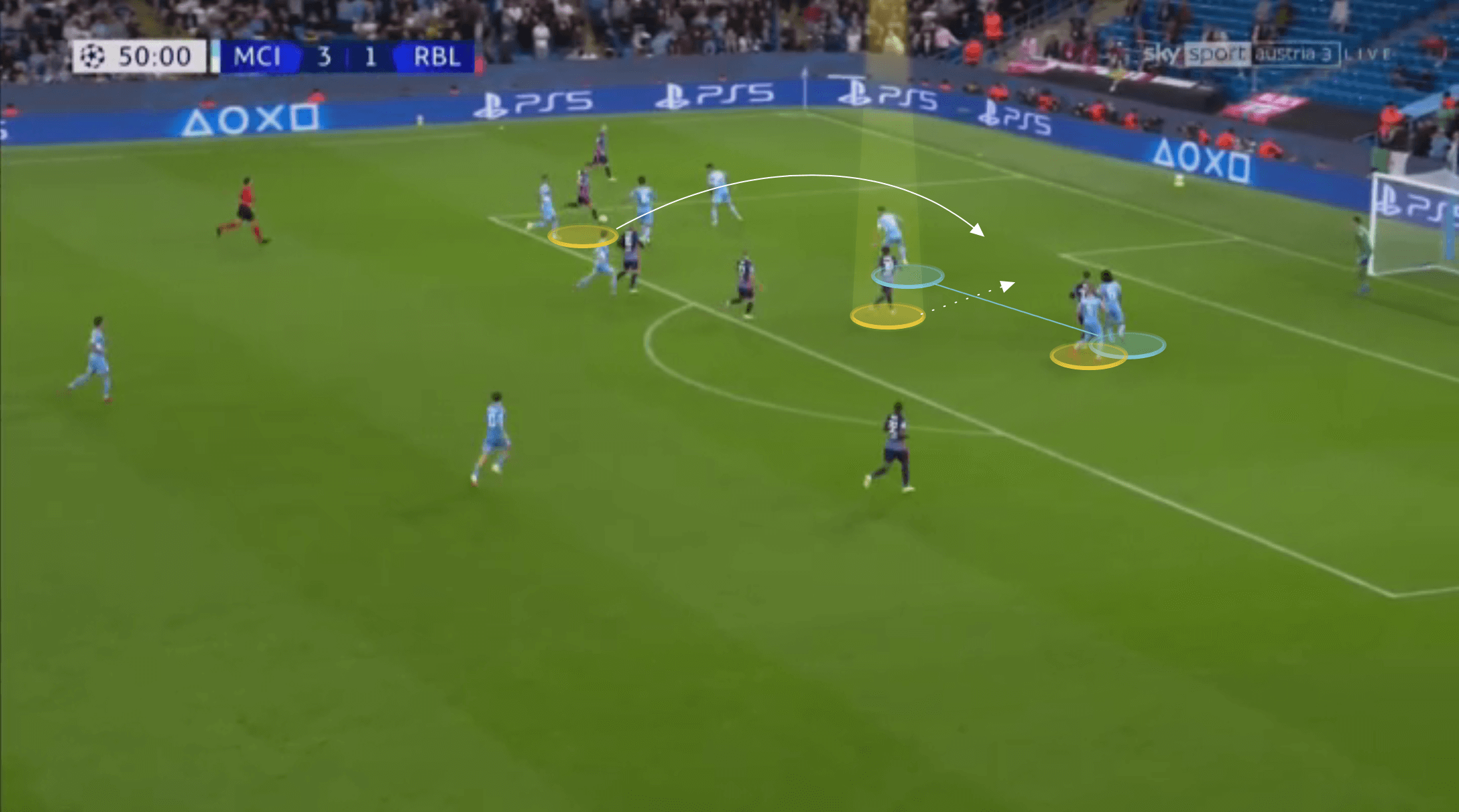 Nkunku possesses the movement qualities of a centre-forward and when positioned centrally he shows talent playing with a marker in his back. He has pace over a short distance, but it is his intelligent movement that allows him to find space. Nkunku recognises when his defender is focusing on the ball and even has to engage the ball-carrier and will use this to drift off of their shoulder and be played in behind.

Below against City, as the pass is played in behind, he drifts off of the shoulder of Ake. 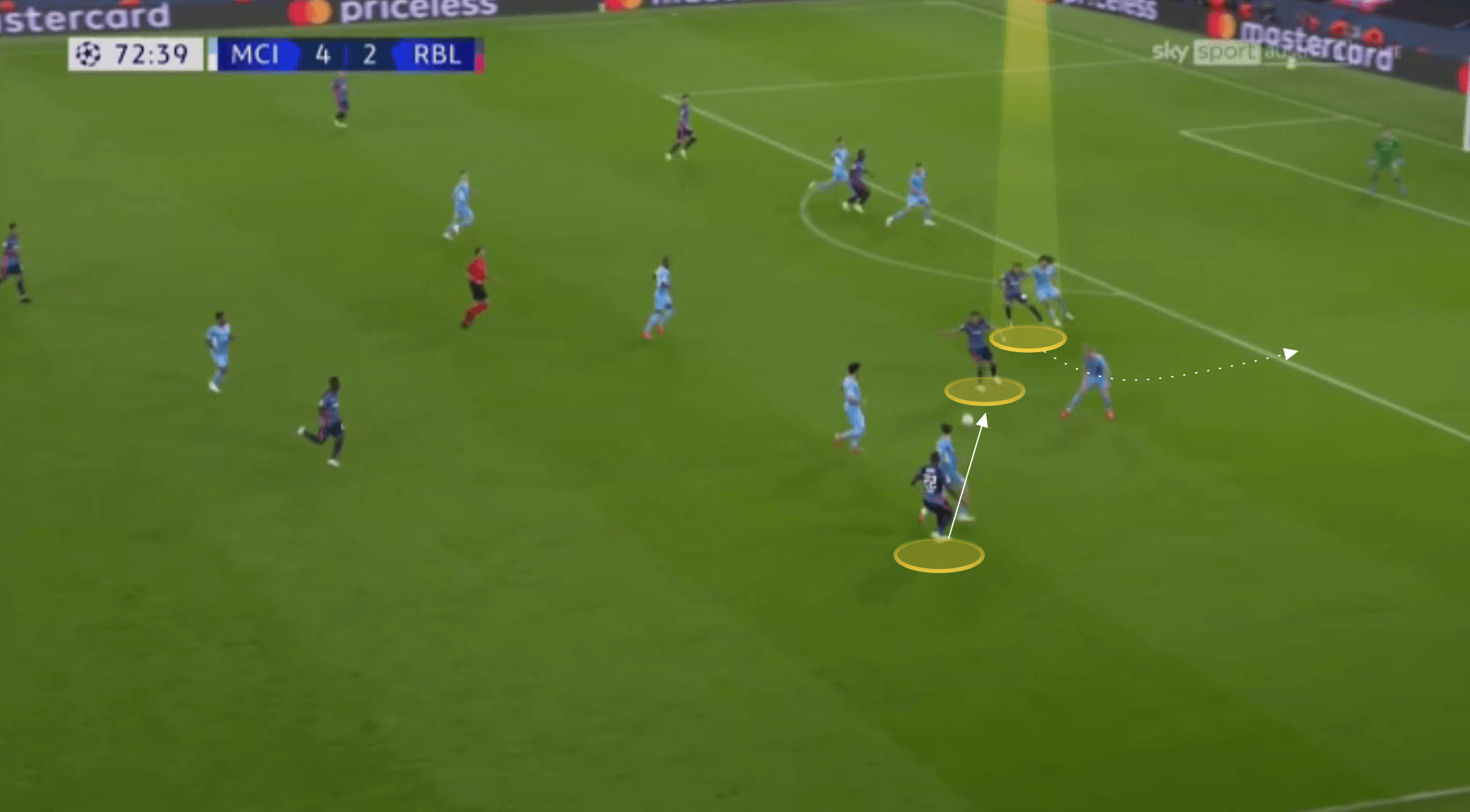 Ake steps forward to engage the ball-carrier and Nkunku is already in behind, timing his run to stay onside and receive the through pass. 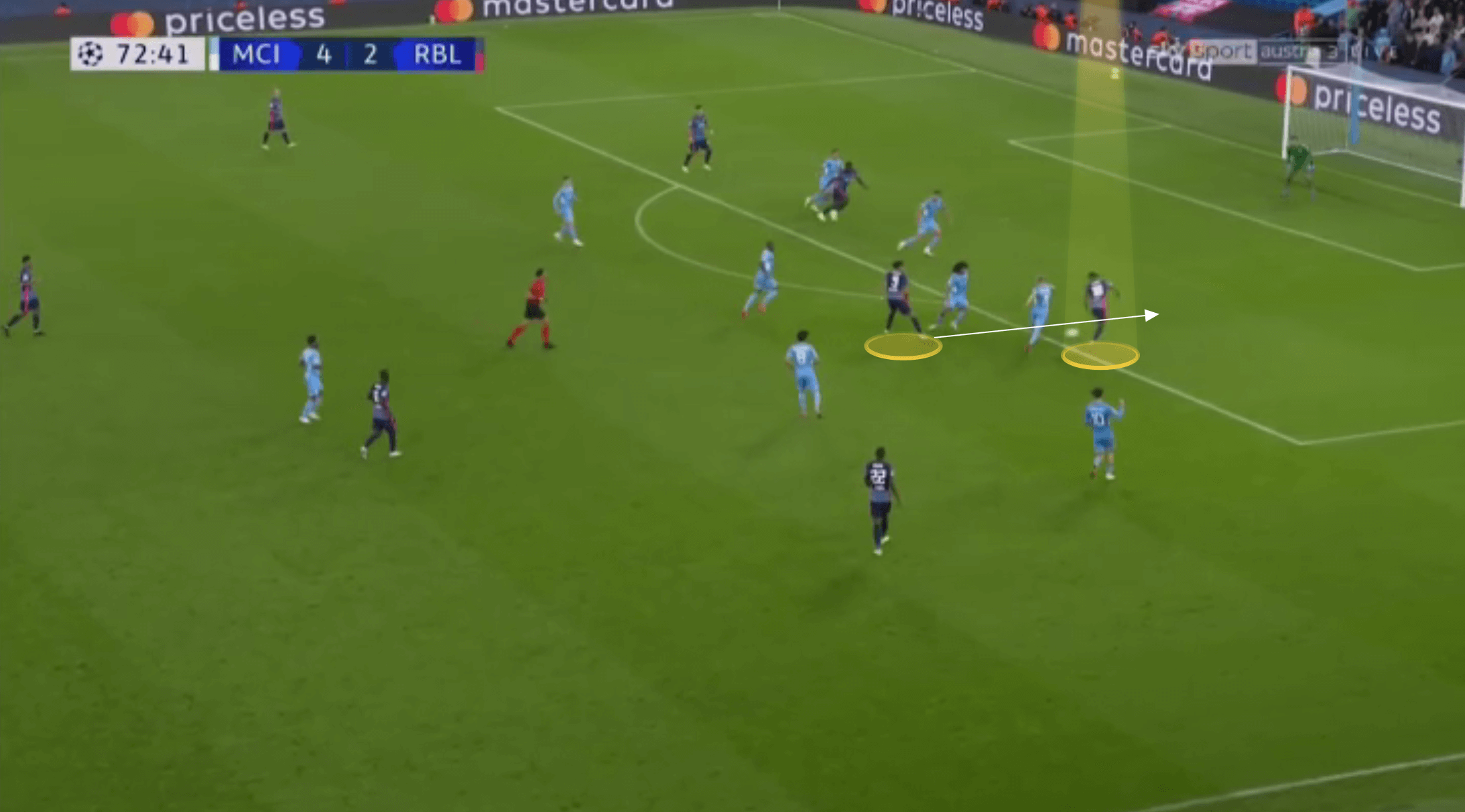 Nkunku is a quality passer, showing ability with his link-up play, as well as circling possession in deeper areas. He can progress the ball, not just as a dribbler but as a passer too. Nkunku is brave in breaking lines and does so accurately too. He uses his dribbling to engage defenders and create space behind them. He will then confidently punch passes through small gaps, with either foot or with the outside of his foot, to find a player either between the lines or in attack. 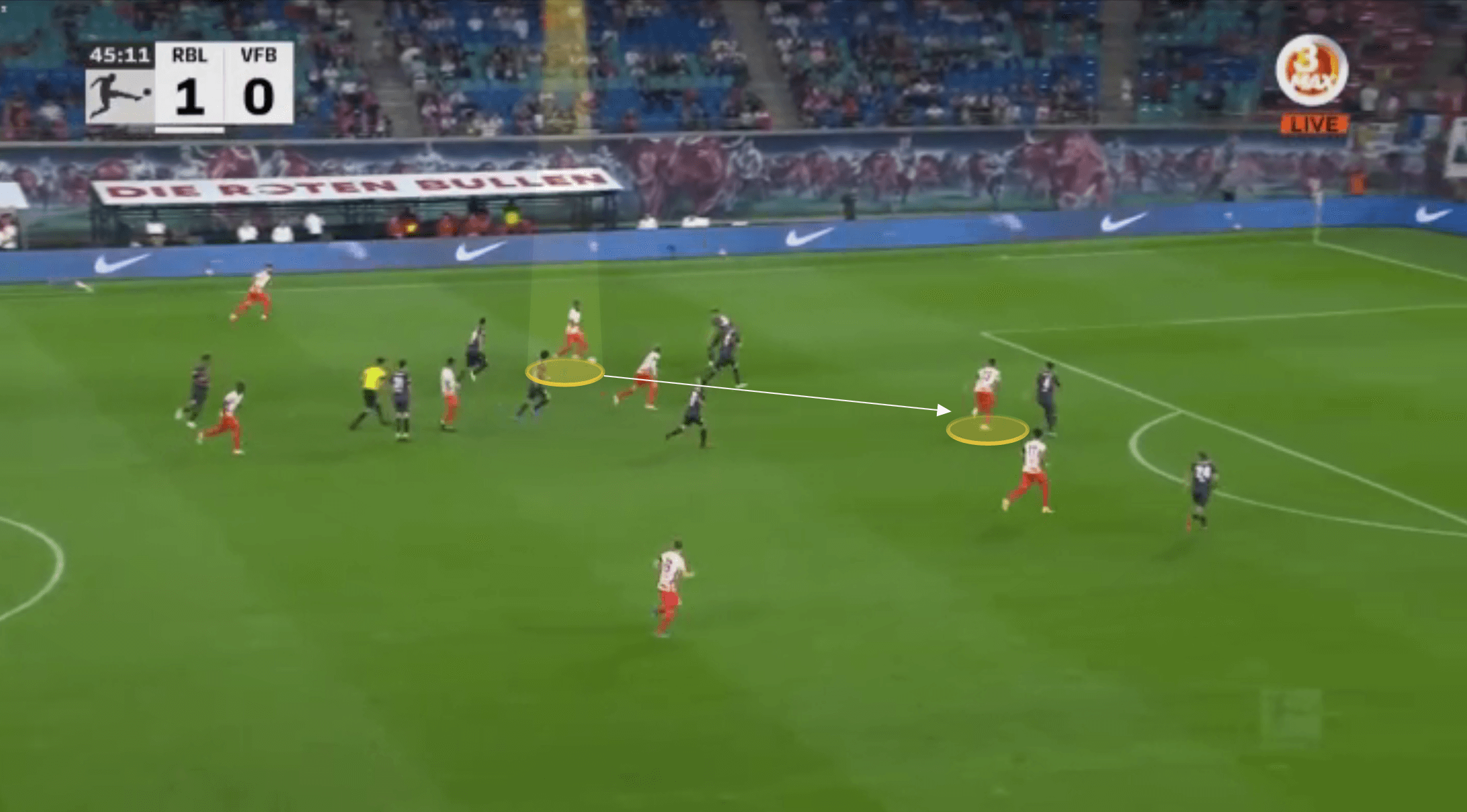 Nkunku can play through passes and is able to recognise the opportunity to hit these in transition. His dribbling ability means he can break away from pressure, but he consistently has his head up when driving forward, and can release players in behind with little delay. His through passes are generally hit with the requisite weight of pass and he consistently displays good vision to hit these. 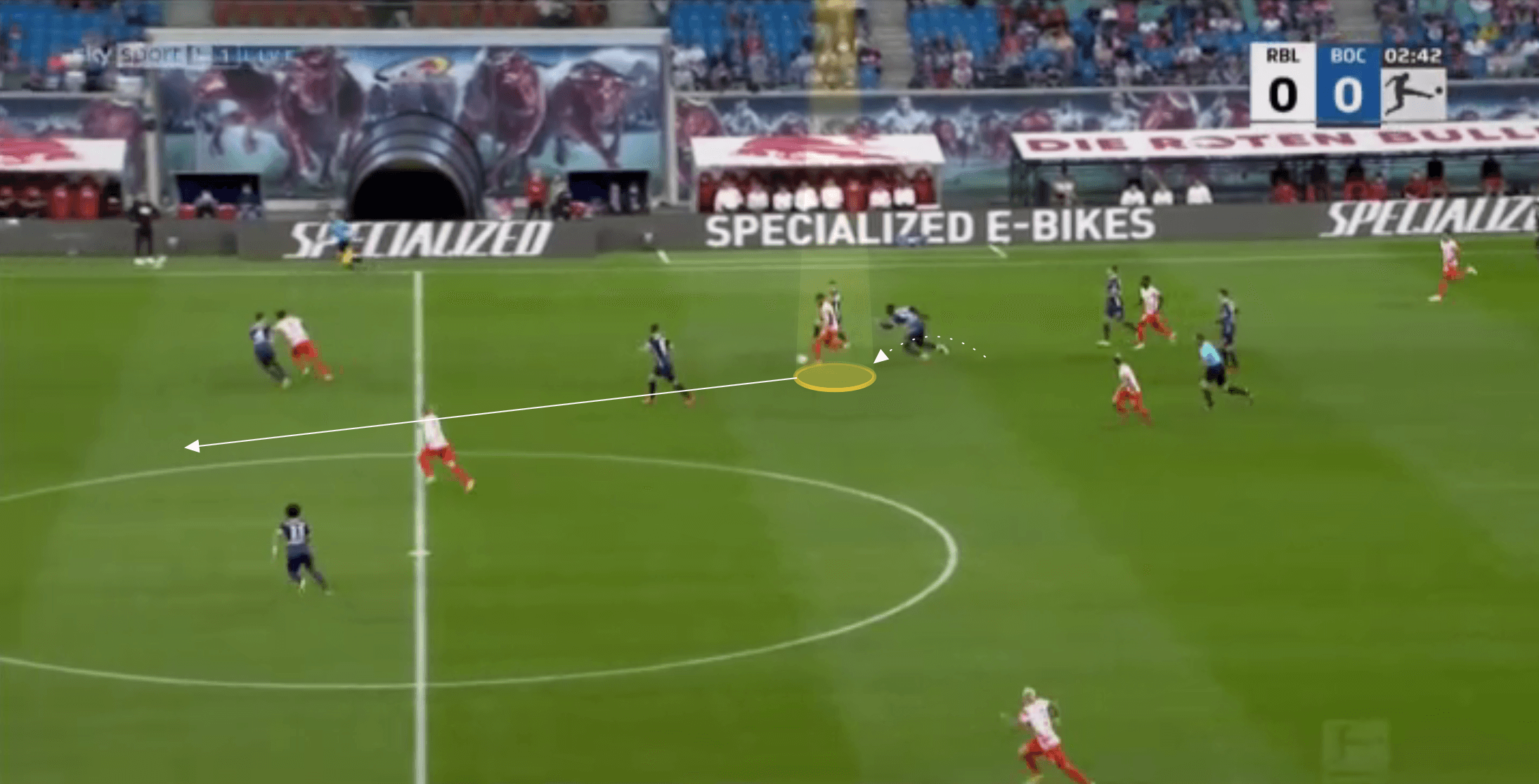 Nkunku shows a variety with his passing too. He shows innovation and ingenuity to disguise his passes and whilst he doesn’t always look to hit difficult passes, valuing retaining possession too, he can play passes few midfielders can pull off. Below is a perfect example of this against Bochum, where he disguises the forward pass shown, hitting a no-look lofted pass over the top for his teammate to run onto.

Nkunku can create opportunities for himself on the ball as well as for others. Just as he shows quality with his movement when he has a player on his back, he is similarly competent when receiving the ball to feet in such a situation. Nkunku can play passes first time, or roll a defender, showing surprising strength at times for a relatively diminutive player. He will back into the defender, using his strength to hold them off, before a simple touch to the side allows him to break away. In the example below against Wolfsburg, Nkunku receives the ball in a typical position for a centre-forward, before breaking away from the defender onto his right foot, and hitting the target from the edge of the box. 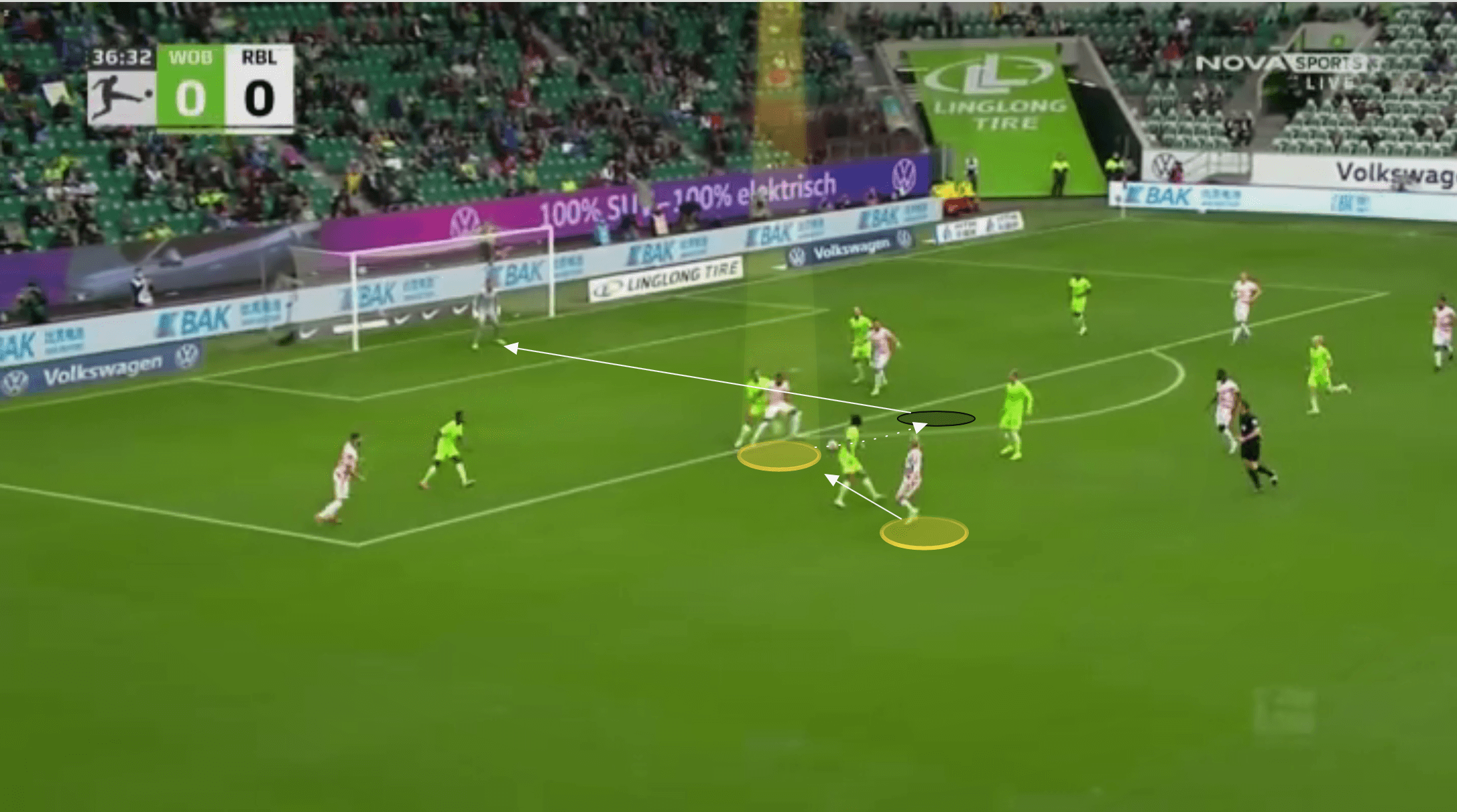 He frequently finds space in a crowded central area and link play in goalscoring positions. Below he does well to bring a ball down from a cross well inside the 18 yard-box. 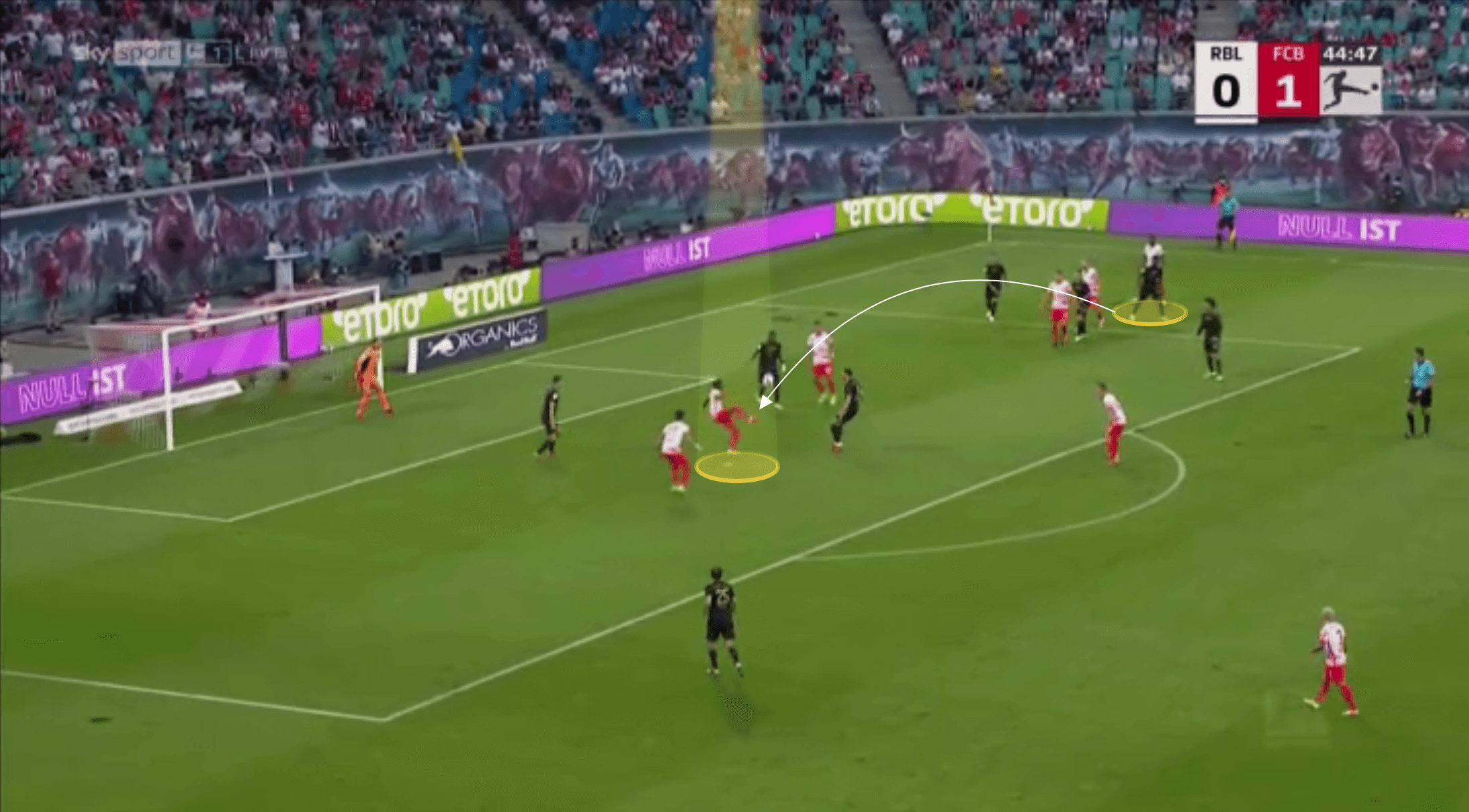 He immediately brings the ball under control and uses his frame to protect the ball as a defender moves onto his back. He then has the composure to see the free man on the edge of the box, laying the ball off for a shot on goal. 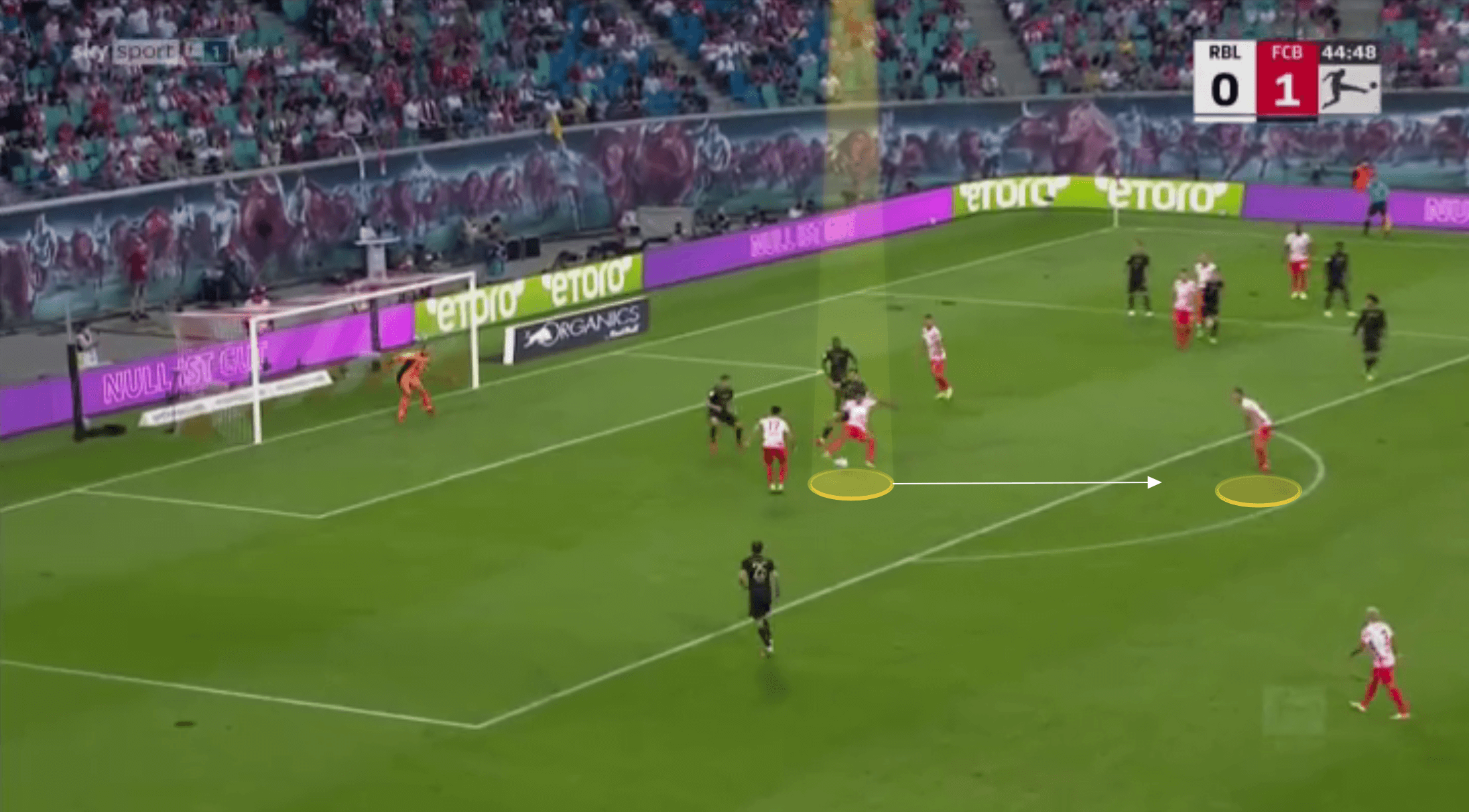 As highlighted in the data section, whilst he puts in an average volume of crosses, Nkunku is highly accurate when delivering from out wide. Firstly, he can cross with either foot. Nkunku will vary his approach and may dribble down the line and pull the ball across goal, but equally he may cut back on himself and shape the ball towards goal.

When he cuts onto his right, as shown below, he generally looks to whip the ball in at pace. He shows vision to assess where the space is in the box, and he can comfortably find a player at the back post even when under close pressure as he makes the cross. 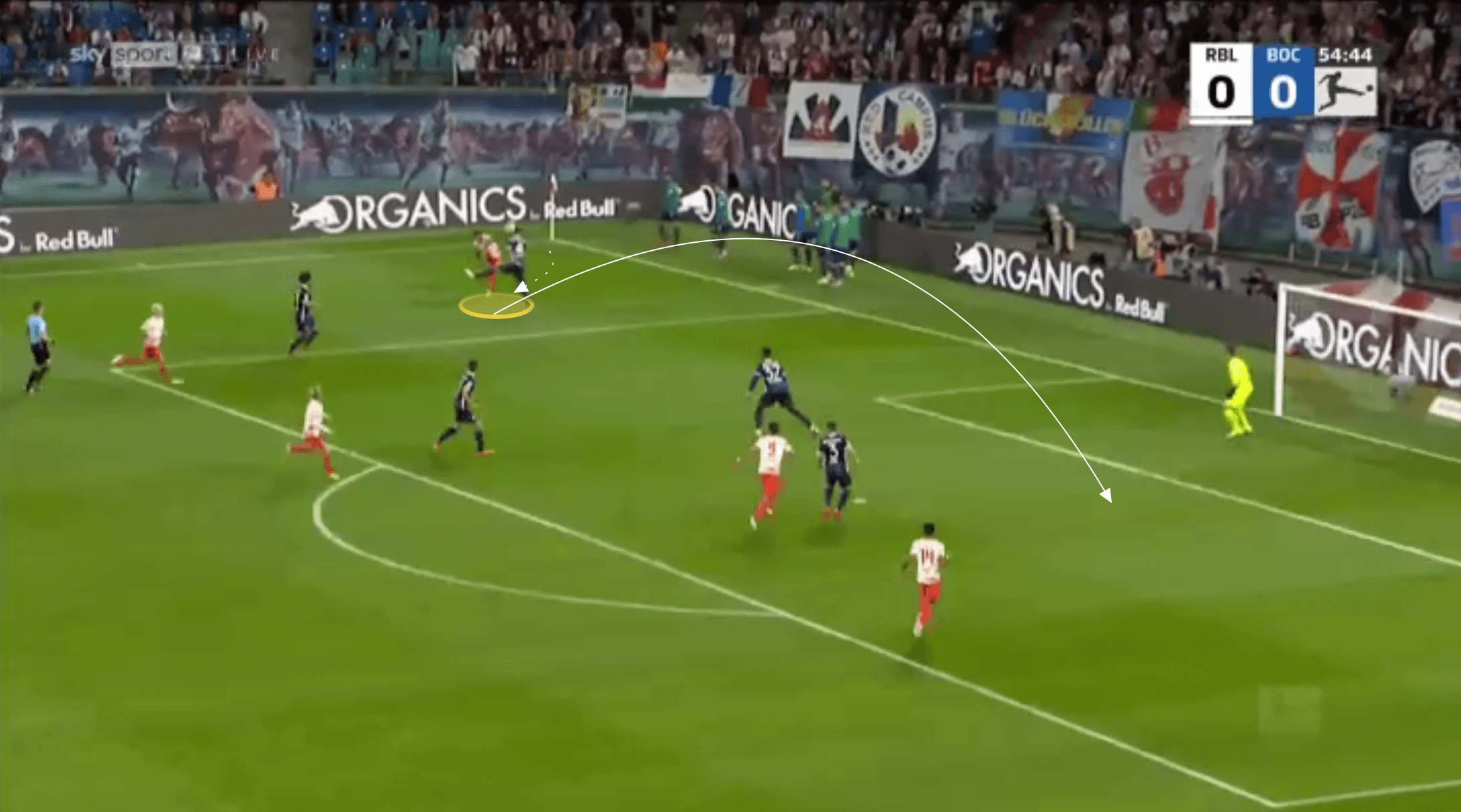 With his left foot, he whips the ball less so and rather focuses on standing the ball up, which admittedly has more mixed levels of success than the previous approach shown. 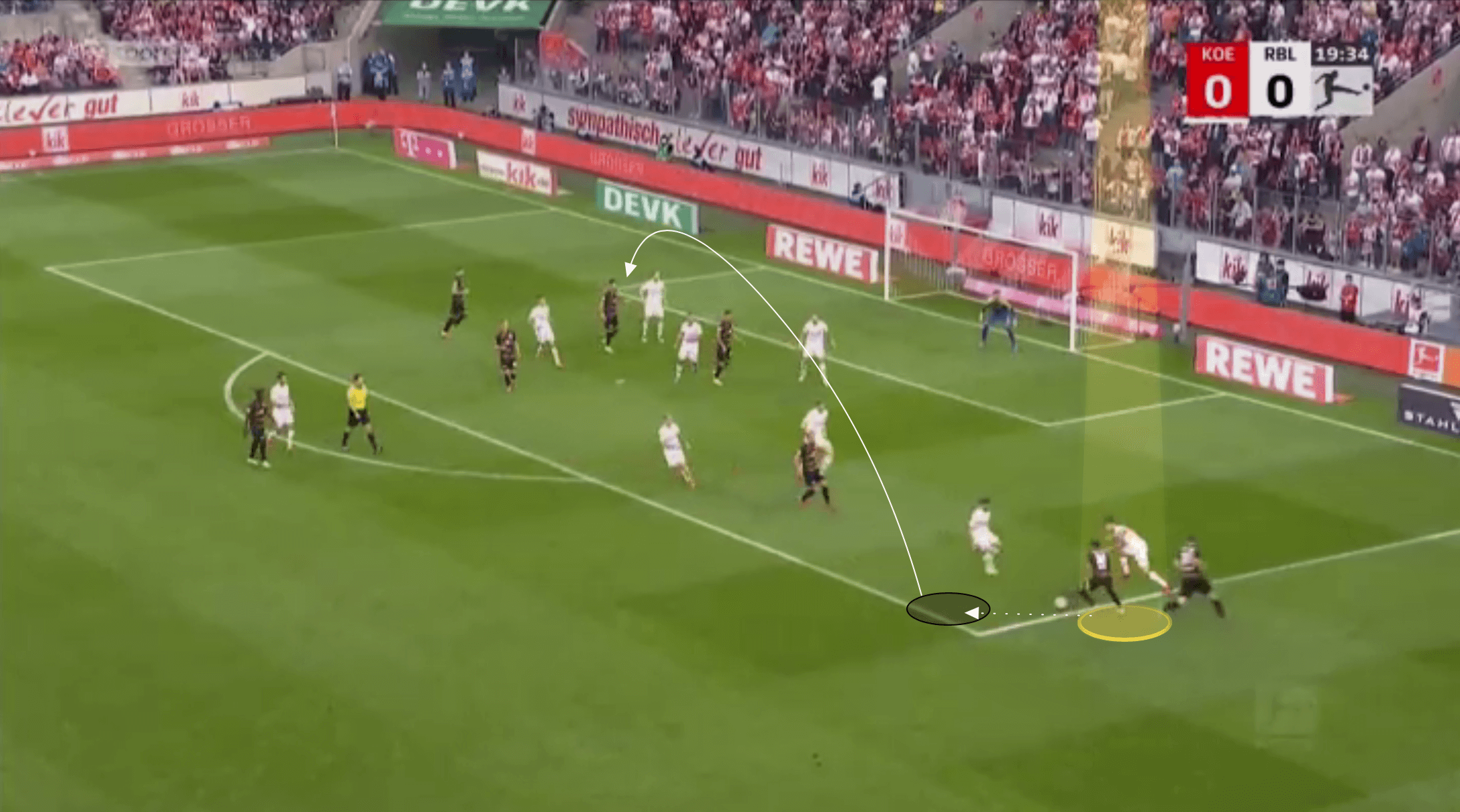 With such a fast start to the season, and frankly consistent quality shown over the past few seasons, it’s no surprise that the transfer rumour mill is already linking Nkunku with a January exit to one of Europe’s elite sides. However, whilst he has always been a talent, this season appears to be Nkunku turning a new page and firmly asserting himself as one of Europe’s most exciting attacking players. Nkunku is an incredibly well-rounded individual, who will offer both goals and assists on a regular basis. As the data section, and subsequent game examples have shown, he has earned his reputation for being a versatile player, with a high level of quality in a variety of areas in his game.