Birmingham City Women left-back Adrienne Jordan is one of the best players in the WSL. She is also one of the most interesting players to do a scout report on, because of her strengths in defending and attacking, which are instrumental in her side’s performances. This tactical analysis will look at why she is so highly rated, and what she adds to Birmingham’s defence and attack. The analysis will also look at how Birmingham can make their tactics suit her way of playing, how the Blues’ opponents are affected by her style of play, and how she could be a huge asset to teams higher up the league because of this.

Beginning with the defence, which is her normal position. As she is a left-back, she doesn’t have to be what some might call a “brick wall” (unlike a centre-back might by getting in the way of shots and blocking them). However, she is very good at slotting in there when needed, as shown below.

Here, you can see how, with Manchester City Women attacking, Birmingham City Women have been forced to revert to a temporary back five, with Jordan slotting in to play as the left-sided defender. This shows how she is a team player, and any team player who is prepared to do that is going to be a good signing.

But what she has most when defending is intelligence and an eye for predicting what will happen next. You can see below how, with Manchester City Women attacking up the wing, Jordan has seen the danger of the potential cross, and is now moving to close down the shot. This does two things for Birmingham City Women. Firstly, it means that the opponent can’t cross the ball in early, and it allows Jordan’s teammates to track back and mark the attacking options in the box, as you can see in the images below.

She also helps to stop attacks in other ways too. Here, you can see how Reading Women are attacking, and have found space in the middle of the final third to shoot from.

But Adrienne Jordan has seen this and made sure she has tracked back to close down the space, working with her central defensive teammate to force Reading to play the ball backwards. She hasn’t needed to touch the ball or try to tackle it – just to position herself in an intelligent way, and that has done the job. There is no way through for Reading on this occasion.

Lastly, she sees danger perhaps quicker than others do, as seen below against Arsenal Women. She comes inside to cover the through ball from Gunners captain Kim Little before it reaches the attacker. The arrows show the ball movement (red solid arrow), Jordan’s movement (blue arrow), and the movement of the Arsenal player looking to get on the end of Little’s pass (red dotted arrow).

This is really key because, without this, Arsenal would have been through to score. However, Birmingham can now clear and get on the attack, and all because this pass has been spotted and cut out.

Some people would say that this is all good, but as a defender, it’s her job to do all of this – and they would be absolutely right. So what makes her stand out as arguably the best left-back in the WSL? Well, it’s her attacking side that does that.

Firstly, when Birmingham are in transition from defence to attack, Jordan is happy to control the left-wing. She makes the run here against Liverpool Women, which means the Reds now have something else to think about (the wide threat from Jordan and the central threat from Rachel Williams and Abbi Grant, who often take up the central attacking positions). This can then lead to opposing defenders being caught in two minds, and leaving a gap open for the attacking side to expose – and this all happens because of Jordan giving Birmingham this extra body in attack.

This is a common occurrence for Birmingham City Women, and helps their attack a lot. You can see below how she is able to run forward and join the midfield, but it is her body positioning here that is particularly notable and important.

In the above image, you can see how she has made the run, but because she is facing the ball, and is sideways, it means she can move forward with the ball, or backwards to cut off a counter-attack, as required to. If she had been facing away from the ball, this would have been more difficult. This sort of detail is what can win or lose matches (because it stops goalscoring opportunities), and so that is why she is such a reliable weapon in the Birmingham arsenal.

She also makes runs beyond her teammates to become the most advanced player, which considering she is a left-back is particularly good. What this does is two things; firstly, it creates an option to pass the ball to, and secondly, it draws opposing defenders away from the ball, as they seek to stop the pass, and that often opens up another pass into the central zones of the pitch. She very often does this, and it always creates space for Birmingham City Women to then attack in.

She is also able to play balls into teammates from attacking areas, which makes her a very dangerous player in the attack. The image below shows how she has made the forward run, and is in possession, but look at where her options are. She can make passes into her teammates’ feet, play the ball in behind the defence for those teammates to run onto, or dribble the ball forward before attempting a cross (which is what she does).

You can see the space that she occupies, and how there are no players around her. Now, given what has been said and shown about her attacking prowess, this is a risky play from the defenders. It is this that makes her a great asset to the Blues, and this is how she ensures that their attacks are carried out with as many players as possible, ensuring that they have the best opportunity of scoring.

When in the final third, she doesn’t just move to create space though. She also joins the attack in the role of a winger, and her pace is what enables her to do this and get back to defend when Birmingham lose possession. You can see below how Birmingham have four players facing up to the four opposing defenders of Reading Women.

Normally, teams might only have their lone striker or front two facing the back four, with the wingers having the ball and trying to find them with a cross or ground pass. Now though, Birmingham has their front two of Williams and Grant, as well as their winger as inside options, with Jordan providing the width and the fourth option. This means that they can now match the defence in a four v four, and that means none of the defenders can create a two on one with any of the attackers, most importantly the strikers who want to score. It makes life so much easier for Birmingham.

What she would bring to a “top four” side

Finally, which teams would benefit from her tactical play? Arsenal Women would be a really good team for her because they would use her in this area. Their wingers like to cut inside and shoot at goal, but sometimes this leaves their wing open. However, if they had Jordan at full-back (despite being a left-back, she has played at right-back on occasion), they could come inside and help create opportunities knowing that their wings were not being unprotected. This, in turn, would help the likes of Vivienne Miedema, because when Arsenal played Birmingham earlier in the season, the Dutch striker didn’t play her best and often found herself isolated and without support from her teammates. If Jordan were to come into the team, then it would allow Kim Little and Lisa Evans, in particular, to move into the central areas and help provide the opportunities for Miedema even more.

It would also mean that Arsenal’s opponents would have more options to cover when Arsenal are attacking, and, with Jordan as an option, as has been shown, they would not be able to leave her any space. However, dragging the defenders over to mark Jordan would, in turn, open up the space for the attackers. This sort of play would also have helped Miedema in their game against Birmingham.

To conclude, Adrienne Jordan does a lot more for Birmingham City Women than some may realise or give her credit for, and that’s why it needs showing. Her pace and eye for space are what have helped Birmingham City Women, and, in their fight against relegation, she will need to be fighting fit for every match. Certainly, Birmingham are a completely different side when she is not in the team. She will also be one of the players teams may make a move for in the summer, because of all that she will bring to them. 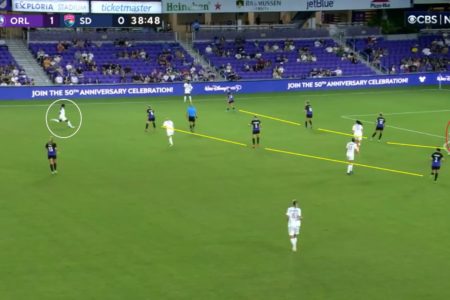 “A testament of our hard work”: Why San Diego Wave’s tactical changes were key to their NWSL draw at Orlando Pride – tactical analysis

Neither Orlando Pride nor San Diego Wave have been in great form recently in the NWSL, with four straight losses […] 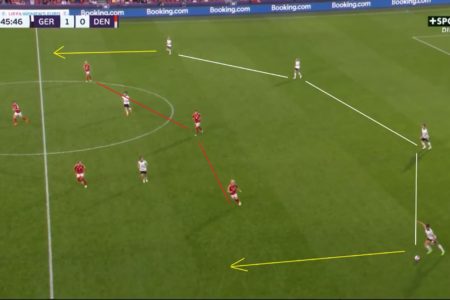 “A statement win”: Why Germany deserved the victory on a disastrous opening night for Denmark in Euro 2022 – tactical analysis

The Euro 2022 tournament is very much up and running, with fans around Europe becoming engrossed in the action and […] 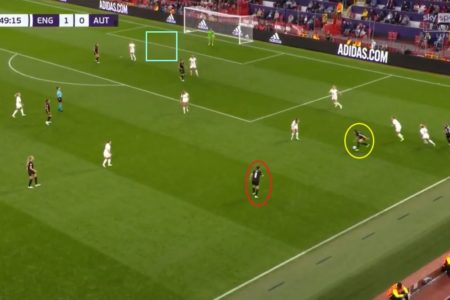 Barbara Dunst: Why the Eintracht Frankfurt player could hold the key for Austria against Norway – scout report