Despite playing as a winger for most of his youth, Aaron Wan-Bissaka is quickly establishing himself as one of the best right-backs in the game. Coveted by Manchester rivals City and United, the 21-year-old appears on the verge of a big money move this summer.

Yet to make represent England at senior level, the rapid youngster will be hoping to overtake Liverpool‘s assist machine Trent Alexander-Arnold in the pecking order next season. This analysis will shine a light on his qualities with the help of statistics.

Offensive one v ones and delivery

As mentioned already, Wan-Bissaka came through the ranks at Crystal Palace as a winger, only making the transition to fullback after being moved up to the first team. His ability to outplay an opponent in wide areas is therefore unsurprising.

Along with pace, the England U21 defender has excellent ball control. He is also capable of shifting his marker with feints and dummies, before driving past them to deliver a cross. On average, he engages in 7.27 offensive duels per game, beating his man 56.3% of the time. For comparison, Kyle Walker, Matt Doherty, Ashley Young, and Alexander-Arnold all failed to reach five take-ons per 90.

The images below illustrate his one v one qualities going forward. Having received possession in the right half-space, he fakes to carry the ball further infield. The opposing left-back becomes unbalanced, creating the conditions for Wan-Bissaka to progress on the outside. 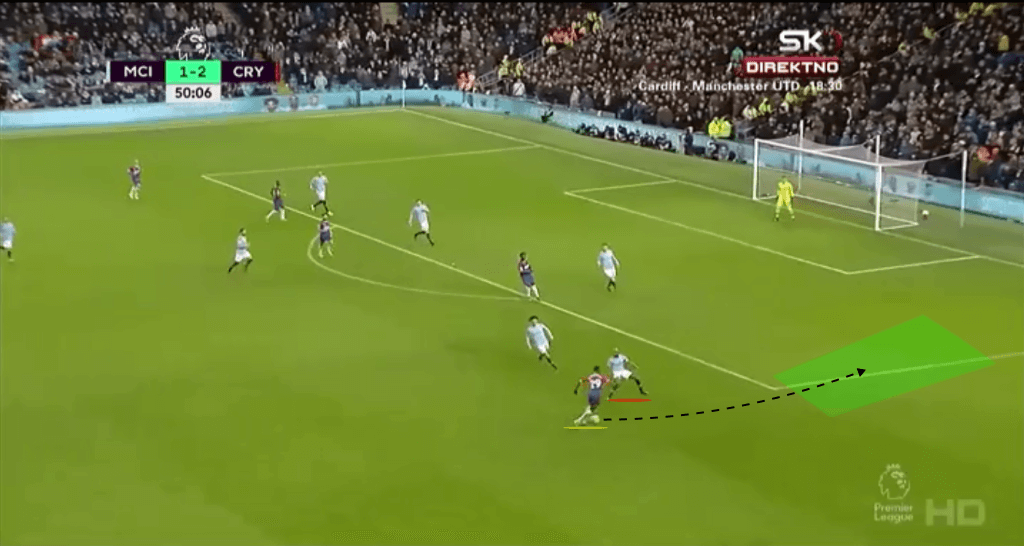 After taking the ball beyond his defender, he looks up to see Andros Townsend making a blind-side run towards the six-yard box. He delivers a precise cross under pressure, with Townsend heading against the post. 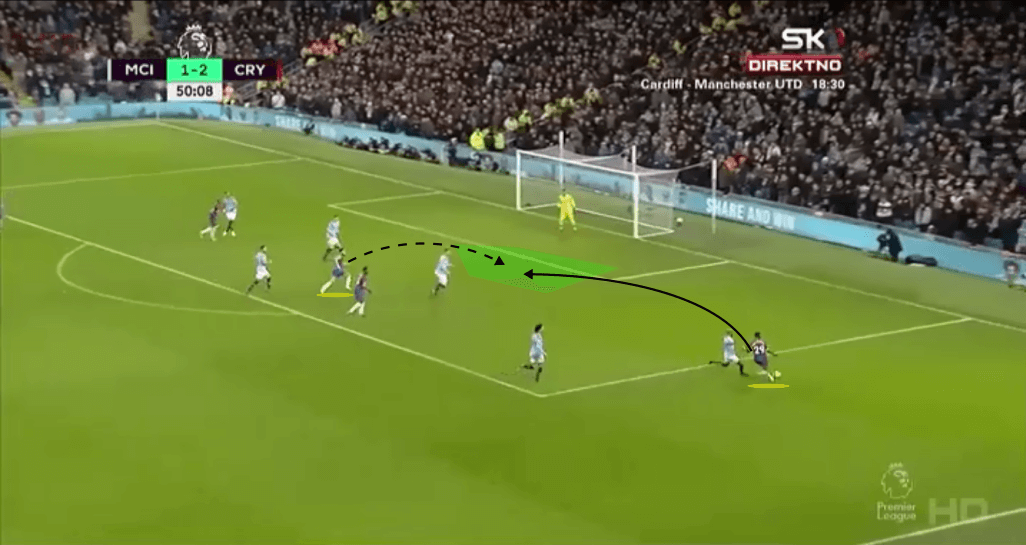 Using fake movements to shift his opponents out of the space before driving forward with the ball is a common feature of Wan-Bissaka’s game. The level of subtlety he shows is quite rare among fullbacks, making the rumoured interest from top clubs all the understandable.

Often with teams that look to pin back their opposition, the fullbacks are tasked with holding the width. Their positioning alone can have a positive influence on the play, often increasing the gaps between defenders as they look to retain access to wide areas.

However, most possession-based sides will regularly look to build the play on one flank, before switching to the far side for an isolated one v one. If the fullback doesn’t possess the necessary qualities to exploit these types of situations, the offensive play can become stifled.

Fortunately, Wan-Bissaka has the pace, trickery, and close control required to beat opponents high up the pitch, making him perfect for teams that aim to create these kinds of scenarios.

The image below shows him once again making use of those qualities in order to create space for a cross. He steps over the ball, faking to go one way before carrying the ball past his opponent and towards the byline. 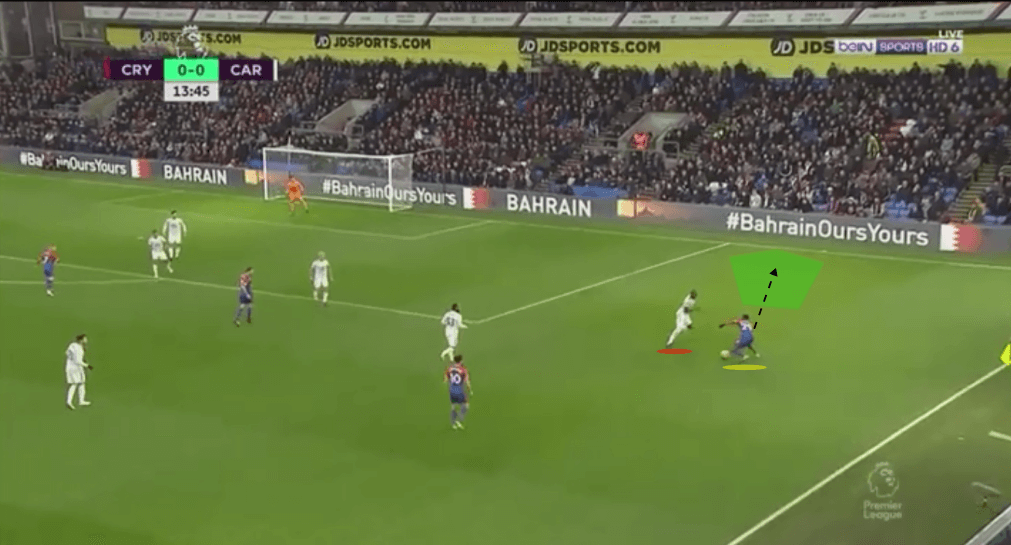 He is also capable of arriving into the final third with well-timed overlapping runs. On these occasions, he is expected to provide first-time deliveries to the box, something that he excels at.

He consistently takes a quick scan of the penalty area before receiving, allowing him to target specific teammates or spaces. The image below highlights this ability. Having arrived onto the play from deep, he receives the ball from the inverted Wilfried Zaha.

Recognising where space exists in the box, as well as the positioning of Mitchy Batshuayi, he delivers low and hard for the Belgian striker to score with a one-touch finish. He rarely makes thoughtless or hopeful crosses, instead analysing the situation quickly and choosing the best available option. 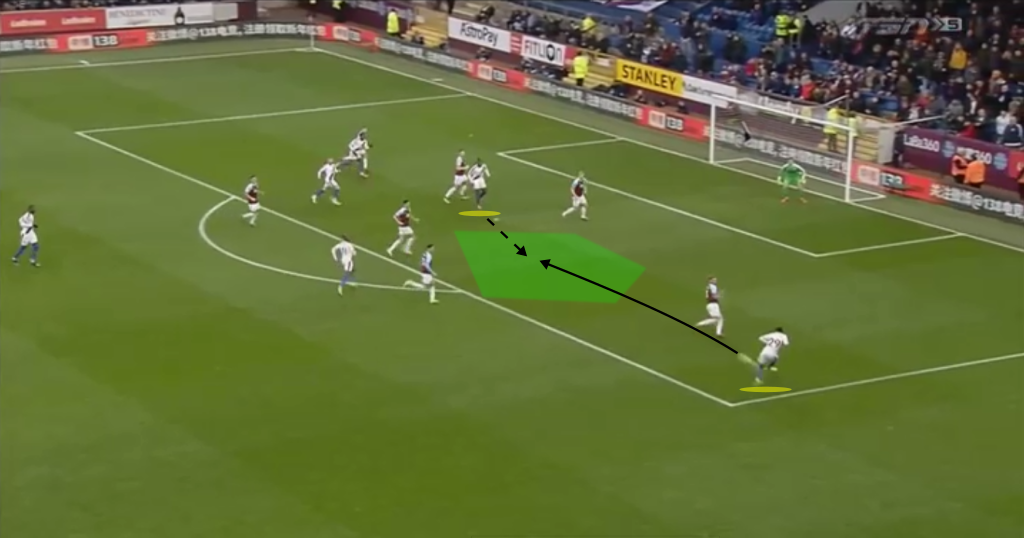 Accurate low crosses, like the one shown above, form an important part of many attack-minded team’s systems. He can, however, vary his deliveries to suit different scenarios. The example below shows him playing a lofted cross towards the centre of the opponent’s penalty box.

He manages to place the ball between the last line of defenders and the goalkeeper, causing a moment of panic for the Watford defence. In the end, they just about succeed in clearing his cross for a corner kick, but it highlights the accuracy and intelligence of the young right-back’s deliveries. 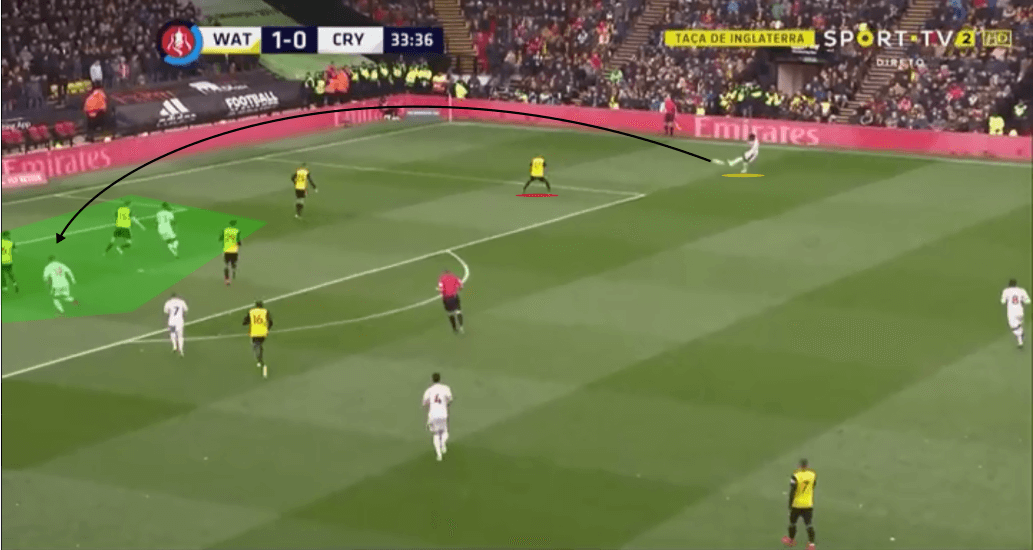 Overall, Wan-Bissaka is a huge asset in the final third. His pace, trickery, and close control make him a real threat in one v ones, while his varied crossing is considered and accurate. In the season just gone, he made an average of 2.12 crosses per game, compared with Kyle Walker’s 2.09, and Ashley Young’s 3.32. His cross accuracy, 33%, is comfortably higher than both players.

A 33% accuracy might not appear particularly impressive. However, It’s the same number as Alexander-Arnold, and higher than Liverpool’s other fullback, Andrew Robertson.

Defensive one v ones and positional sense

The previous section shows the benefits that can be enjoyed when turning a right winger into a right-back. On the flip side, this transition can often produce fullbacks with little knowledge or experience when it comes to defending.

Interestingly, this isn’t the case with Wan-Bissaka. In fact, his ability to defend one v one is perhaps the most impressive aspect of his game.

In his debut experience of first-team training, he was asked to fill in at right-back to make up the numbers. Despite limited expertise, he managed to perform well and hasn’t looked back ever since.

His opponent in those early sessions, Wilfried Zaha, is amongst the best one v one wingers in Europe. However, Wan-Bissaka wasn’t fazed. Zaha spoke highly of the rookie earlier this year;

“I was kind of shocked at how good he was. I don’t understand how you can go from being a winger to being a right-back. He’s so good at defending.”

The images below highlight his qualities in this area. With Arsenal wide man Alex Iwobi receiving on the touchline, Wan-Bissaka maintains the appropriate distances. His positioning also achieves the right balance, meaning he is able to limit the winger’s ability to dribble infield, while also giving himself an advantage should Iwobi look to drive down the flank. 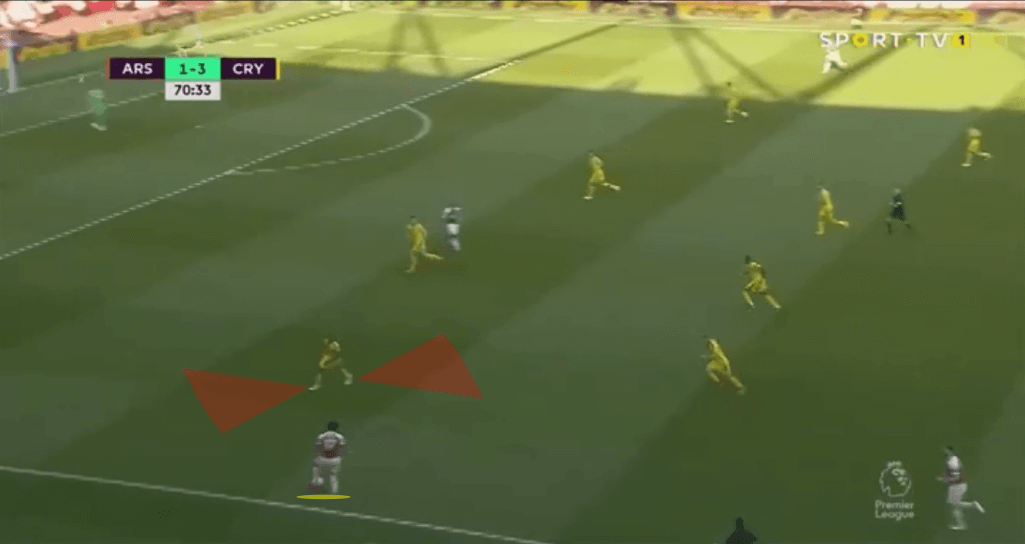 The Nigerian international chooses the latter option but is unable to beat his man. Wan-Bissaka stays focused on the ball, ignoring any feints. He times his challenge well to end the immediate threat. 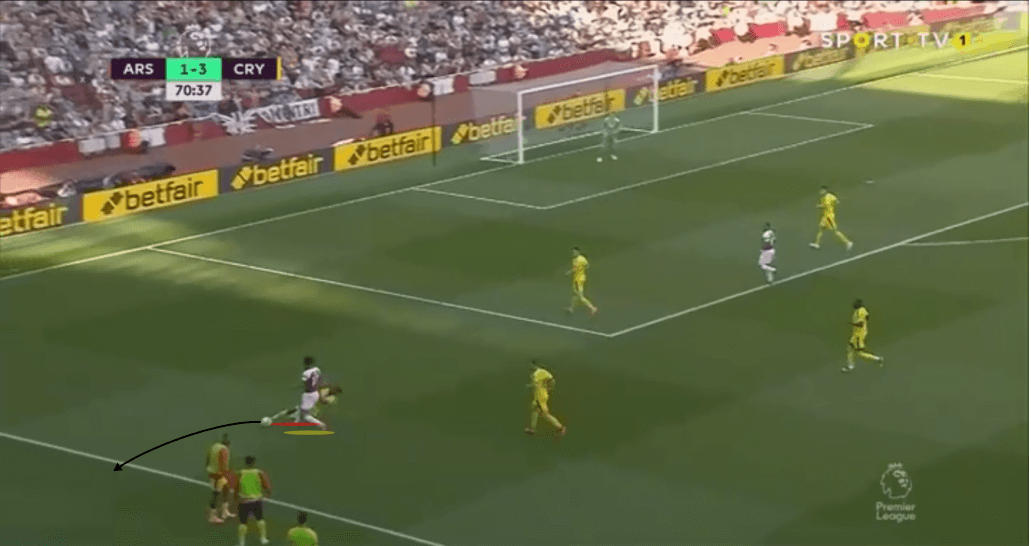 For much of the season, Crystal Palace adopted a counter-attacking system, coupling defensive organisation with rapid break-aways via the wings. This suited Wan-Bissaka’s ability to defend the wide areas and prevent crosses, while he was rarely forced to marshal large amounts of space.

Were he to join one of the top teams in the league, he will need to defend depth more often, and with less cover. Limited support shouldn’t be an issue, given his talent for dispossessing one v one.

However, he will also need to be positionally intelligent in order to manage opponent counters effectively. So, does he have these qualities?

During the first few months of his move to right-back, he made most of his starts with the under 23’s. His coach at the time, Richard Shaw, has since spoken of the teething problems that existed.

“I think we played Charlton away, and he kept getting caught with the ball inside. It would have been easy to say ‘it’s not quite working at right-back’, but we stuck with it.”

Things appear to have improved significantly since then, justifying the decision to persist with the positional change. The images below provide a comparison.

The first example shows one of the moments Shaw was referring to. Wan-Bissaka gets caught wrong-side of his man, with the opposing winger making a late run through the channel between right-back and right centre-back.

The attacker receives a lofted pass in behind, before slotting the ball past the Crystal Palace goalkeeper. 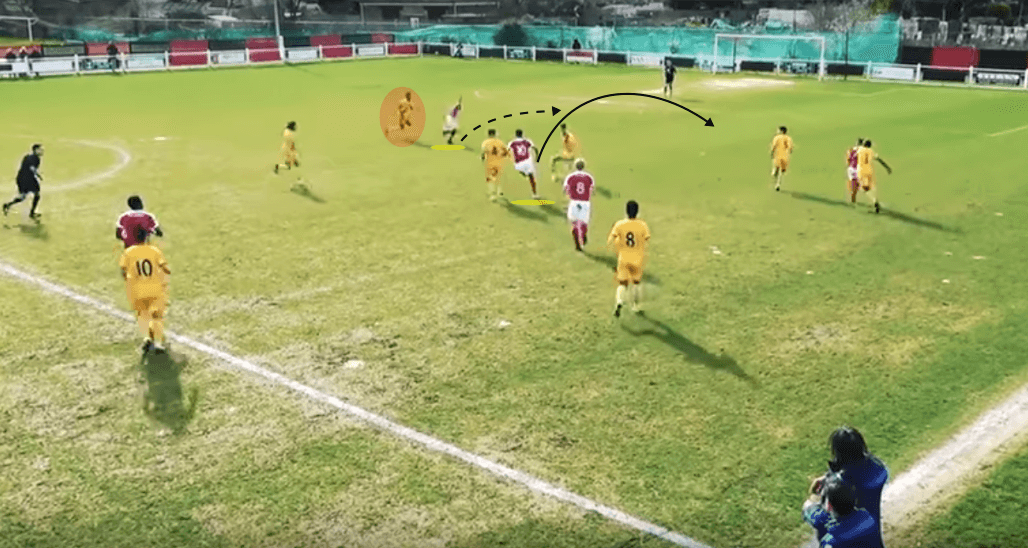 The more recent example highlights the improvements he has made. Switched on and prepared for the counter-attack, he makes sure to stay goalside, forcing the ball-occupant into a pass down the opposite flank. 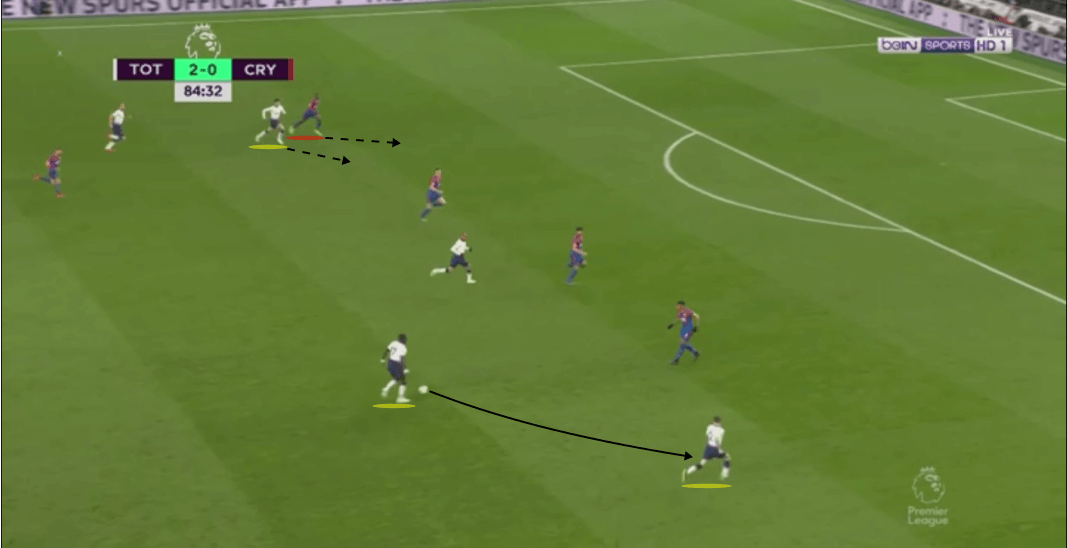 After Kieran Trippier receives the ball on the right for Spurs, he aims for the free man arriving on Wan-Bissaka’s blind-side. Again, the fullback is aware of his surroundings, moving away from his initial marker as the cross is delivered, before making the intercepting header.

Another question mark surrounding Wan-Bissaka’s ability to play for one of the top six teams centres on his passing game. Overall, there doesn’t appear to be any weakness in this sense.

His pass accuracy for the season finished at 77%, less than Walker, but more than Young and Alexander-Arnold. Stylistic changes would likely see this number increase were he to move to a bigger club, given the vertical focus of Crystal Palace’s offensive phases.

He is comfortable taking the ball infield, before making intelligent passes in central areas. The sequence below illustrates this. After recovering possession for his side, the fullback glides past Fulham youngster Ryan Sessegnon having identified a gap through the middle. 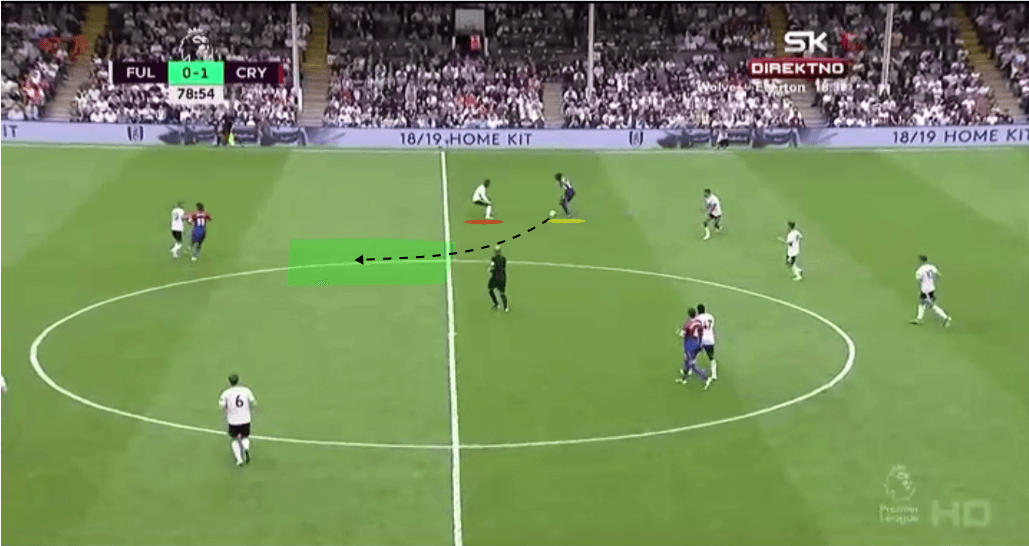 After beating the first defender, he calmly feeds a through ball in behind the opponent’s last line of defence. Zaha runs onto it, before rounding the goalkeeper and sealing three points. 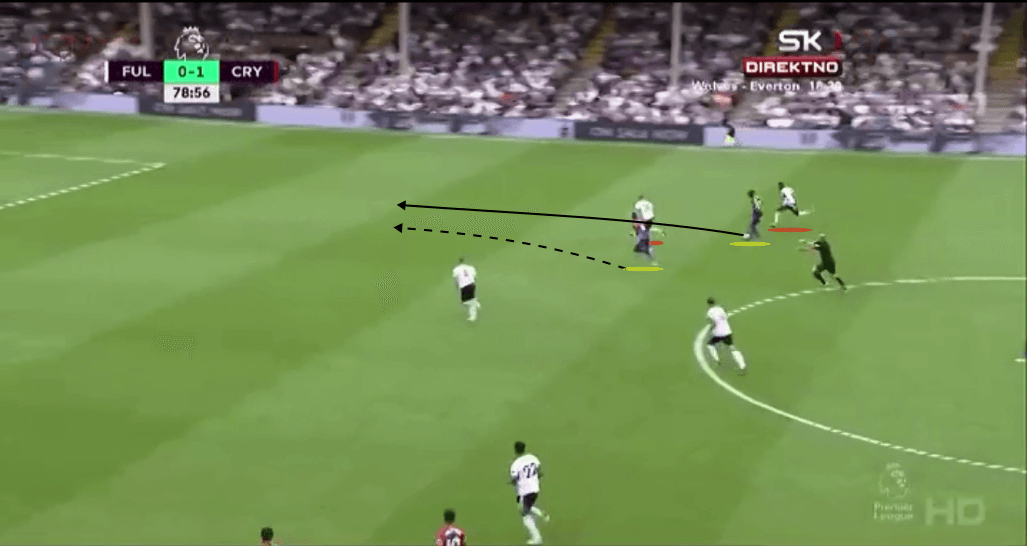 Wan-Bissaka appears to tick every box from a technical, tactical, and physical point of view. In terms of attitude, he seems to have matured into a hard-working professional. Commitment wasn’t always a consistent feature of his profile, however.

Shaw also coached him at under 16 level, and spoke of a shy yet troublesome youngster.

“Aaron was always the quiet one out of the group, but he was probably up there in terms of causing trouble. There was a couple of times where he didn’t turn up for games or he was late. But we just persevered with him.”

Since breaking into the team, Wan-Bissaka has been a mainstay in Roy Hodgson’s defence. It seems any doubts over professionalism are firmly in the past.

Despite recording 12 assists, Alexander-Arnold faced genuine competition for his place in this season’s best XI from Wan-Bissaka. Reports suggest that Manchester United manager Ole Gunnar-Solskjaer has made him his number one target at right-back, with the Eagles expected to rebuff any bids lower than 50 million. Spurs and Manchester City are also rumoured to be keeping track of his situation. Wherever he ends up, Palace’s diamond has a bright future ahead of him.