West Ham vs Southampton pitted two teams with upturned form against each other. Southampton, buoyed by the change in manager, came into the match off the back of consecutive wins versus Arsenal and Huddersfield. West Ham entered with a form of winning four out of the previous five matches. The tactically entertaining match ended 2-1 to West Ham through the individual brilliance of Felipe Anderson netting two goals.

The match provided two interesting tactical situations. The first tactical analysis of interest was Southampton’s newly instilled pressing system versus West Ham’s strong wide play. The second tactical scenario was the area on the pitch that Southampton targeted to attack.

Southampton’s front three of Stuart Armstrong, Danny Ings and Nathan Redmond set the tone of the press by defending narrow with the trigger to press being a ball played wide. Ings positions himself between the West Ham center-backs and both attacking midfielders, Armstrong and Redmond, are tucked in to keep the ball from the West Ham center. Southampton is inviting the pass wide.

Below we see the resultant of the press. Redmond has intentional body shape pinning the ball to the sideline. Two additional Southampton defenders press up onto West Ham’s Felipe Anderson creating a tight 2 v 3 in Southampton’s favour. 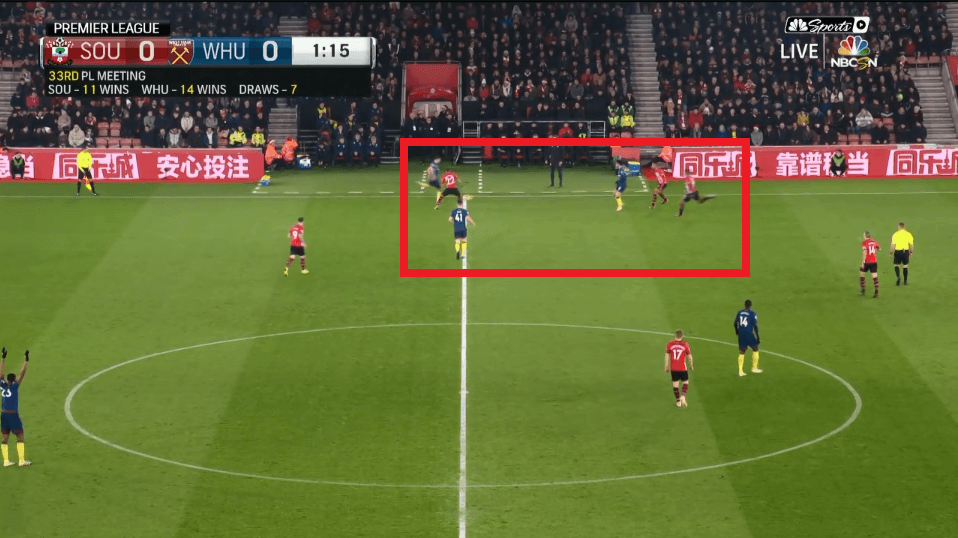 The Southampton defensive strategy was clear. Keep the ball out of the middle of the field and press along the sidelines.

How did West Ham handle the Southampton press?

West Ham did not avoid the wide areas where Southampton was trying to press. Instead, they played quickly into the left side sideline triggering the press. Along the left sideline, they used the calm passing of Cresswell, Anderson and Rice to draw in Southampton before switching play back to the right to Michail Antonio at right back.

Below we see West Ham playing the ball out wide to Cresswell with Southampton’s Redmond anticipating the pressing trigger.

Cresswell receives the pass and drives with the ball down the sideline.

Cresswell chooses to play the ball to Robert Snodgrass, #11. The defense collapses around Snodgrass and the ball goes back to Rice.

The ball is switched to Antonio who is one vs one with Southampton’s Matt Targett. 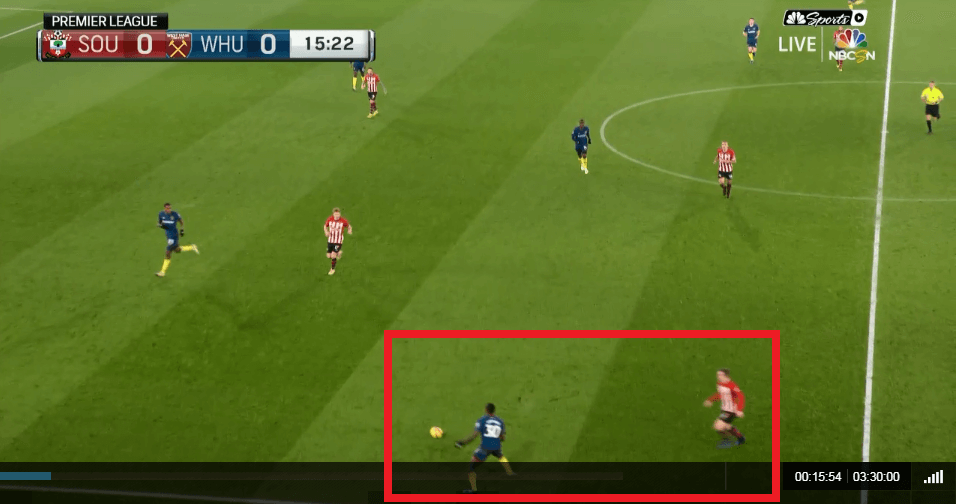 Antonio blows by Targett and is off into the attacking third. 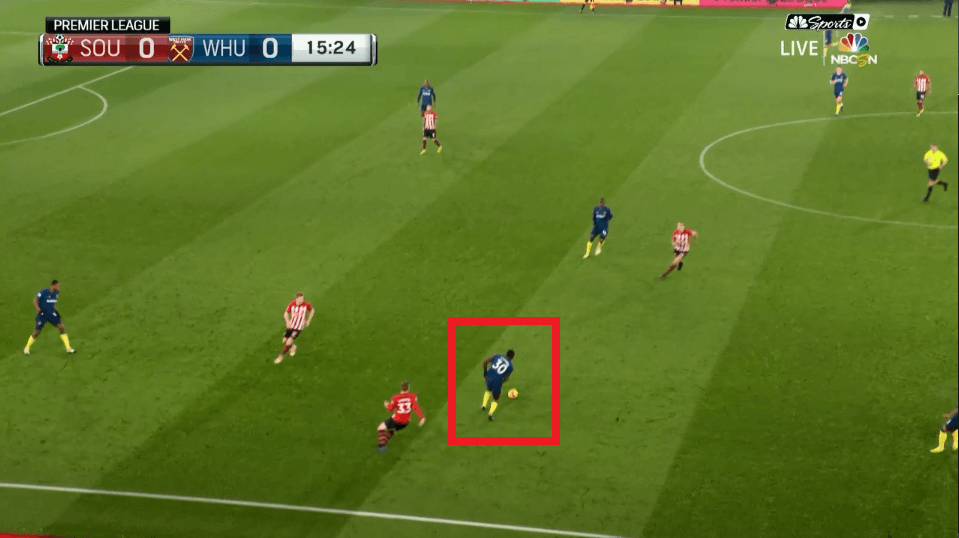 This overload to isolate pattern was evident throughout the match. Cresswell, Anderson and Rice provided calm possession on the left side drawing in the Southampton defense. Next, a switch was made to Antonio to go at the defense on the dribble. 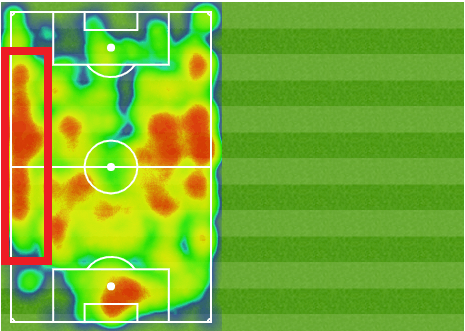 The area within the red box is Cresswell and Anderson. There is not much activity in the middle of the pitch for West Ham. They did not force the ball into the middle area that Southampton was taking away. 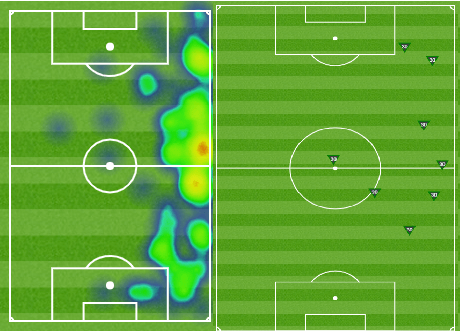 West Ham decided to overload the left side with Cresswell and Anderson in order to isolate Antonio on the right. This tactical strategy took Southampton’s press and flipped it against them.

West Ham’s strategy to attack through Antonio on the right provided a direct counter strategy for the Southampton attack. They purposefully targetted Antonio’s side of the field. They left no doubt their intention to go at Antonio and the space he left behind on his forays forward.

The graphic below from whoscored.com shows West Ham in blue attacking down both flanks with only 19% of the attacks coming through the middle. Again, showing their overload to isolate strategy. Southampton attacked primarily, 48%, down the left sideline. That is the side that Michail Antonio was defending for West Ham.

Southampton set up to attack the left side through Matt Targett and Stuart Armstrong. Below is the duo’s combined heatmap. 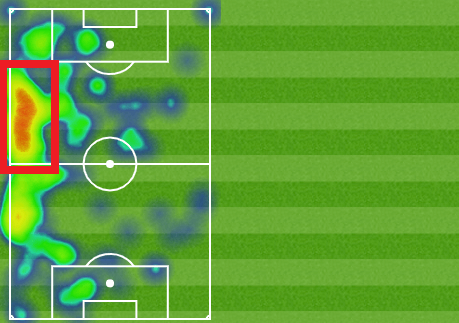 The area in the red box is the defending area covered by West Ham’s Michail Antonio. Stuart Armstrong drifted wide from his attacking mid position to the left to combine with Targett. 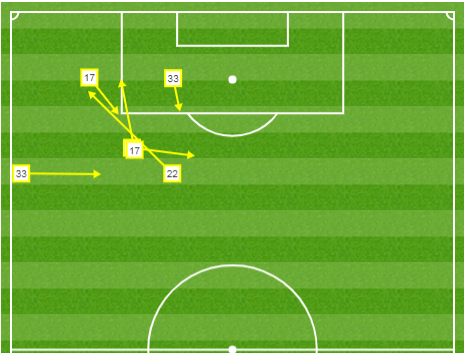 Finally, we see the number of crosses from open play, successful crosses in green and unsuccessful in red. Targett, #33, had a majority of the crossing opportunities on the left side. 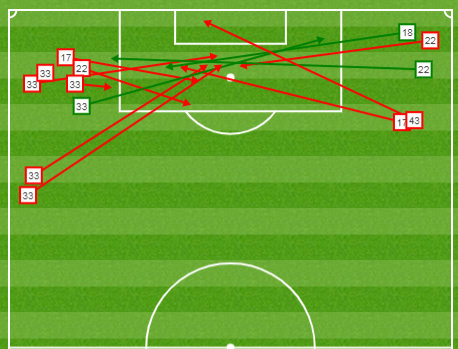 Here we see Southampton overloading Antonio’s side. Armstrong and Ings are pressed up on West Ham’s Antonio and Issa Diop respectively. This pins in the West Ham defense allowing a pass wide to Targett for a cross. 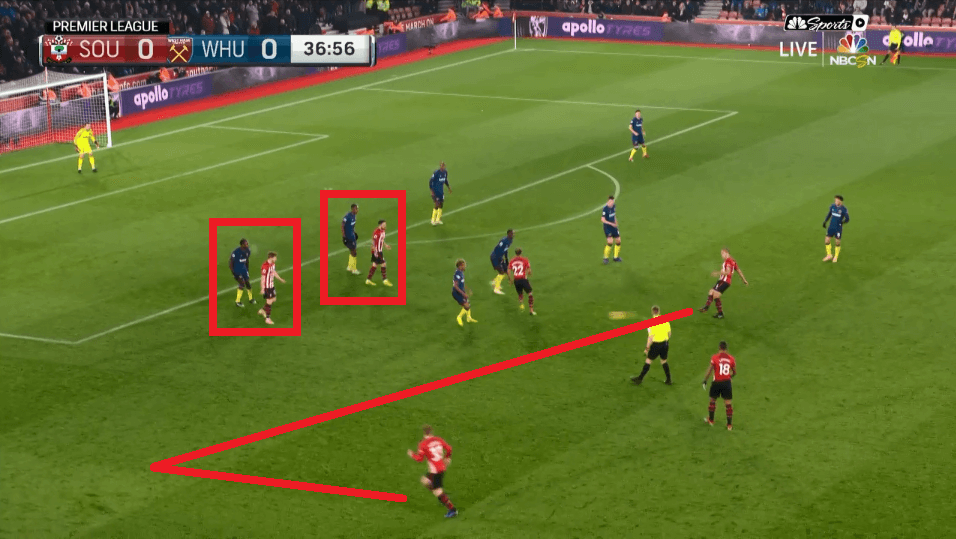 The pass is made wide to Targett and he has time and space to serve a ball in. This is one example of his six crosses in the match. 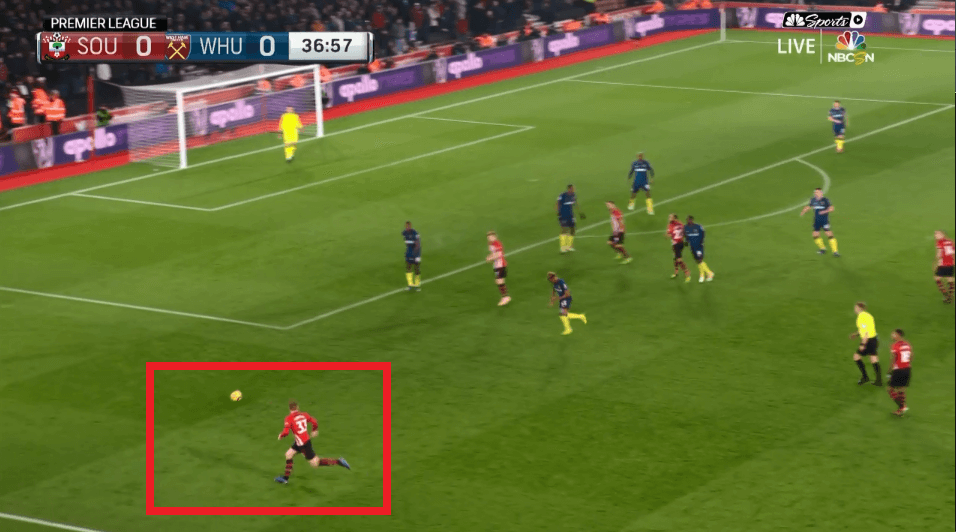 Both teams came in with a clear tactical strategy to take advantage of what the opponent was giving them.

West Ham sought to exploit Southampton’s pressing and convert it into chasing. By inviting the press on the left and switching the ball to Antonio they found much success. This success was due not only to Antonio’s ability but also the skill set of Cresswell, Anderson, and Rice on the left side. They calmly drew in the Southampton defence that ultimately freed up Antonio on the opposite side of the field.

For Southampton, it was an interesting contrast when it came to the positives and negatives of playing against Michail Antonio at right back. Southampton clearly identified Antonio as a weakness in the West Ham defense and intentionally went at his space. They succeeded in getting the opportunities required to take the result but ultimately were not good enough in front of goal. Sofascore.com recorded two ‘Big Chances’ and two ‘Big Chances Missed’ for Southampton. Those missed opportunities left them on the wrong end of this tactically entertaining 2-1 game.