Wasteful Wolfsburg: How Chelsea controlled their UWCL clash without the ball

Chelsea Women faced Wolfsburg Women in the UEFA Women’s Champions League quarter-final first leg at Budapest’s Szusza Ferenc Stadium, with the game ending in a 2-1 win for Chelsea which gives them a considerable advantage heading into the second leg. However, it must be said that Wolfsburg were the dominant team in this match in terms of attacking and creating dangerous goal-scoring actions. which should give them hope of overturning this result.

In this tactical analysis piece, we will delve deeper into analysing how Chelsea were able to get a positive result despite their average overall performance, especially when compared to their recent performances in the FAWSL, as well as how Wolfsburg lost the match despite being the better team on the pitch in terms of tactics, chances and attacking threat. This analysis will try to answer these intriguing questions while exploring the data and analysing some of the most pivotal actions of the match.

Emma Hayes chose to start this crucial game in a 4-4-2 diamond formation relying on Ann-Katrin Berger as a goalkeeper, Niamh Charles, Millie Bright, Magdalena Eriksson and Jonna Andersson in defence, Melanie Leupolz, Sophie Ingle and Ji So-yun as the central midfielders, while Pernille Harder supported the attack by playing as an advanced playmaker just behind Sam Kerr, the team’s striker, and Fran Kirby who was the second striker and tended to go out towards the right flank during the match.

Stephan Lerch, Wolfsburg’s manager, started with a 4-2-3-1 formation with Katarzyna Kiedrzynek as a goalkeeper, Kathrin Hendrich, Sara Doorsoun-Khajeh, Dominique Janssen and Felicitas Rauch in defence, Ingrid Syrstad Engen and Lena Oberdorf as the central midfielders, while Svenja Huth and Fridolina Rolfö played on the flanks with Alexandra Popp positioned as an advanced playmaker behind the striker Ewa Pajor.

Chelsea played without the services of Bethany England and Maren Mjelde due to injuries but had many options on the bench such as Erin Cuthbert and Jessie Fleming. They started the match with a lot of intensity and it was clear that they were the team that was looking to score and threaten Wolfsburg’s defence first since they pressed high from the first minute. However, Wolfsburg were the ones who had the first big opportunity of the match when Rolfö’s header went off target in the second minute. 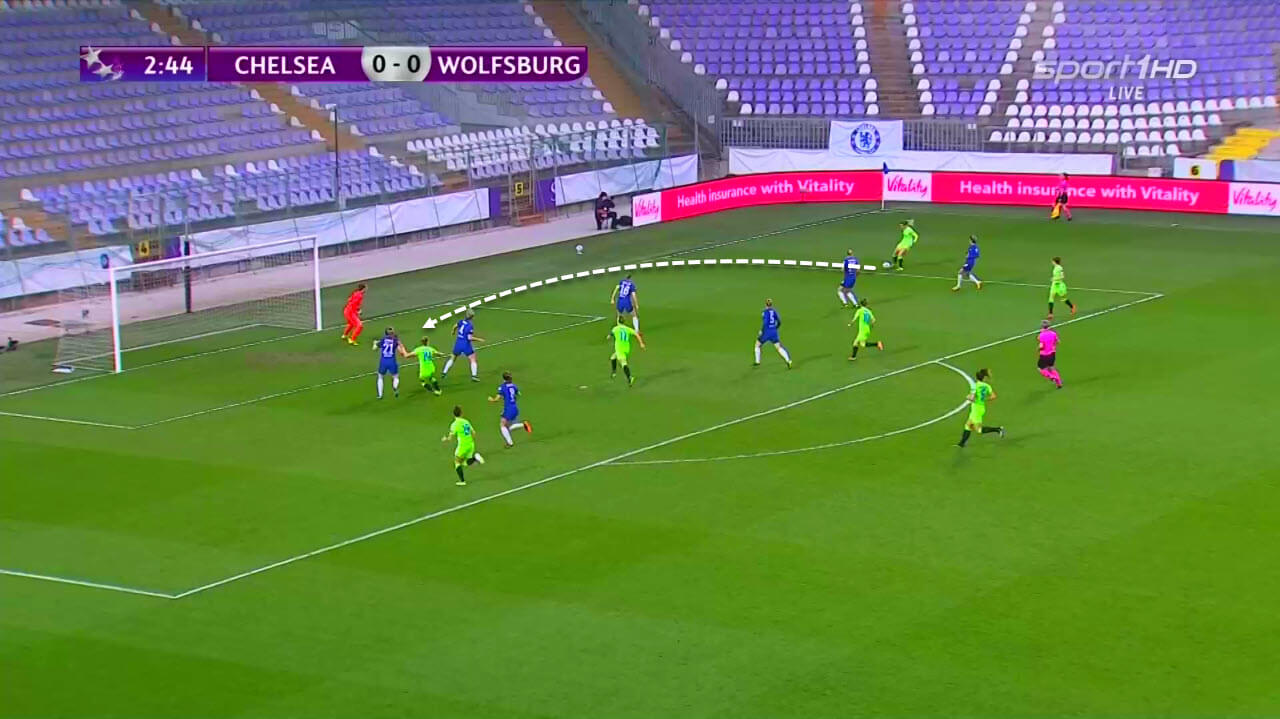 Wolfsburg were successful in attacking through the right-wing lanes at the start of the match since Chelsea left considerable free spaces on that wing. And Wolfsburg were able to exploit this over and over and cross a few times with success but Wolfsburg’s attackers’ headers were not dangerous initially. And following the first ten minutes, both teams continued their pressing and their tight marking, and this resulted in both teams’ inability to keep possession for so long or build from the back easily.

Harder then exploited a passing mistake from Wolfsburg’s defender at the 12th minute and was about to steal the ball from Kiedrzynek who went out bravely to save the action with success, as you can see below. 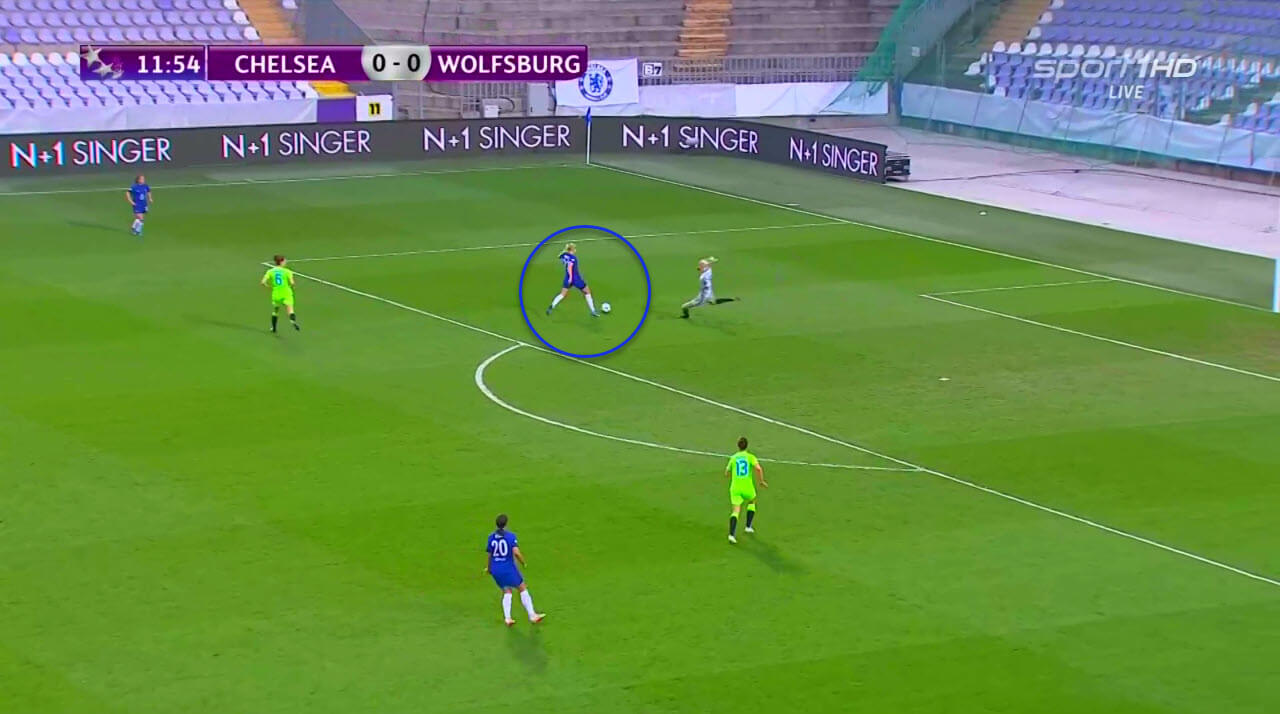 Just a minute after, Wolfsburg continued in exploiting Chelsea’s defending mistakes on the right-wing and were able to cross another time from the same position but this time Popp was able to put power into her shoot and the ball hit the post and was then deviated by Berger.

And as you can see below, Popp was moving without tight marking in this action and Bright and Eriksson could have done more to mark her and prevent her from receiving that cross, but instead, one was worried about Rolfö who was standing alone on the far post and the other tried to block the cross by moving towards the near post. And this misunderstanding led to Popp being alone and unmarked inside the box, and this could has resulted in a Wolfsburg goal. 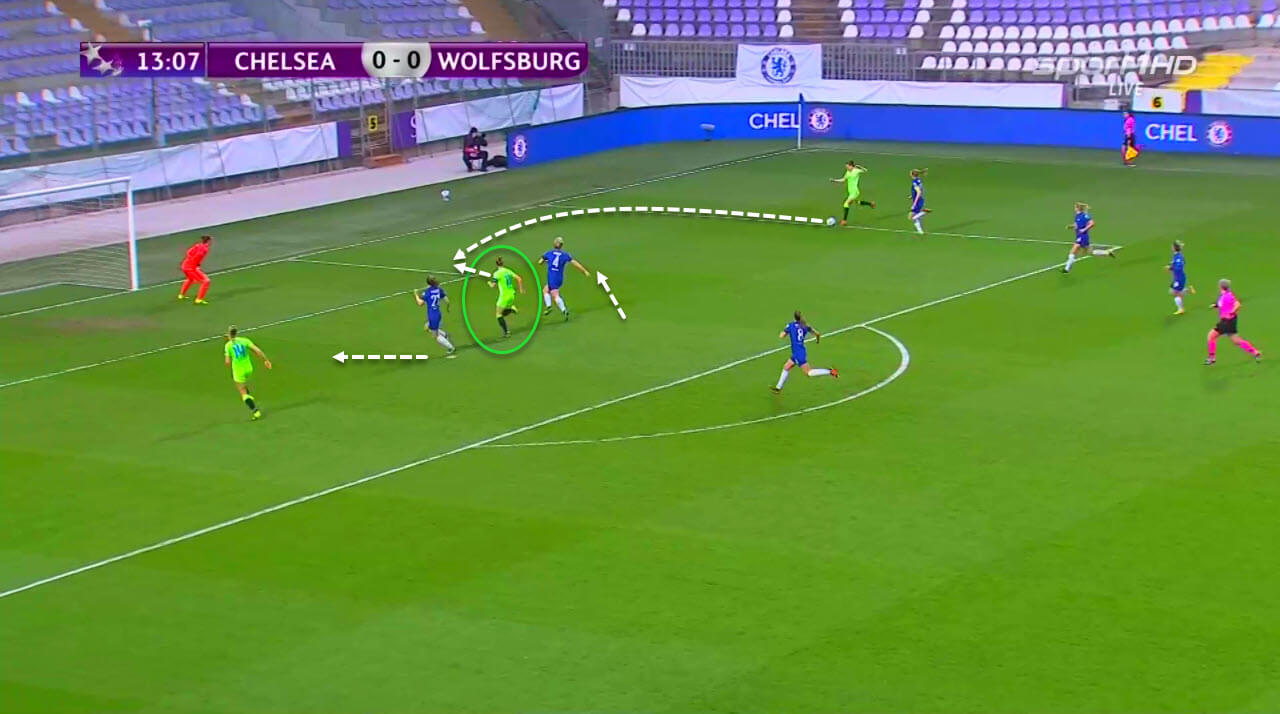 Wolfsburg’s attacks continued and after two minutes the same combination happened again on the same wing before Popp deviated the cross with a handball, scoring a disallowed goal.

And at the 20th minute, Rolfö was able to intercept the ball from Bright in a dangerous area and immediately shot the ball but Berger was there to save it. Rolfö and Pajor then tried their chances once again but Berger was excellent in saving 3 successive shots. However, it was clear that Chelsea’s defence was not well organised in this first-half and they could have conceded one or two goals in a single half. 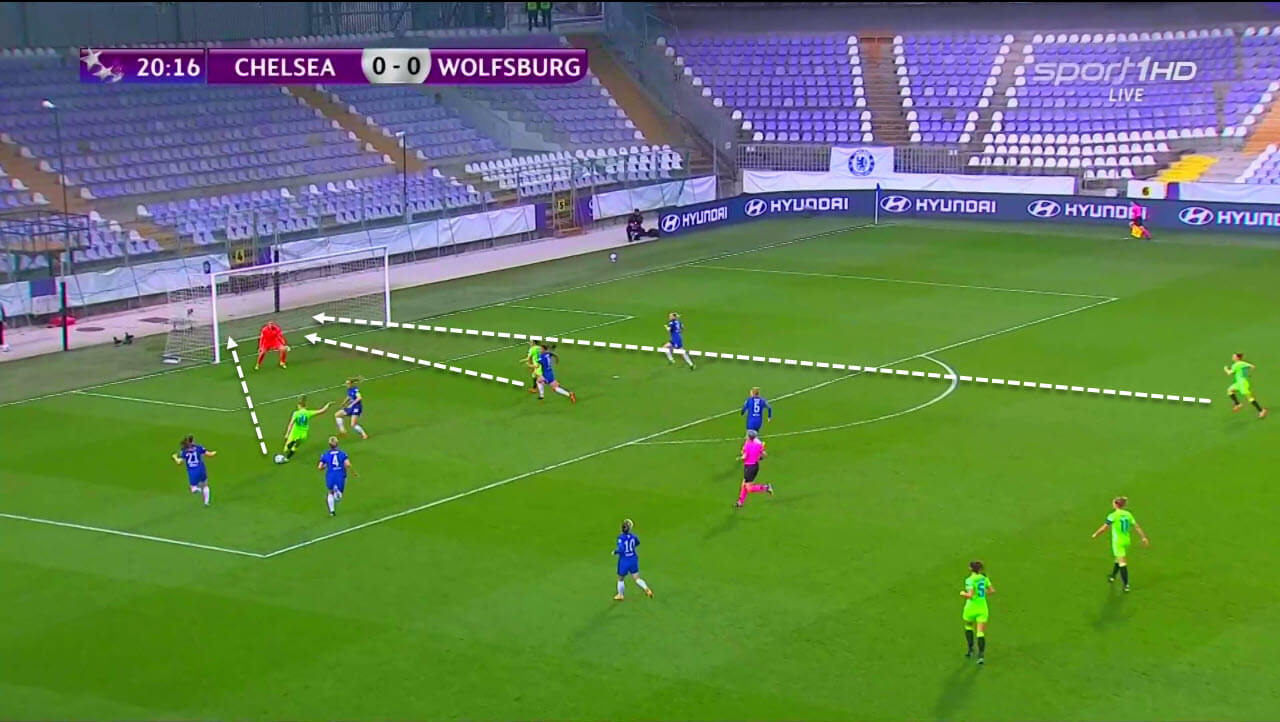 In fact, the number of shots in this match tells a lot about who attacked more. Wolfsburg made 20 shots while Chelsea shot only 5 times in the whole match, despite being the team that scored more goals. And this at the same time highlights the realism and the tactical maturity of the Blues and Wolfsburg’s inability to concretise chances and finish the goal-scoring chances in a proper way.

And at the 29th minute, Chelsea were able to create the first well-played attacking action by passing patiently from the back until Kerr moved towards the middle, received the ball and passed an accurate through ball to Kirby in the free space. But unfortunately for the team, Kirby did not aim at shooting and preferred to pass towards the box where there were no Chelsea players.

And she missed an important chance that could have generated a corner or at least kept them in attack for a while. And that could have made the game a bit easier for them since they were a bit confused in the first 30 minutes. Chelsea needed a clear goal-scoring chance to get their confidence back and play without overthinking following Wolfsburg’s numerous dangerous opportunities, but this did not come in the first-half and occurred only at the start of the second one. 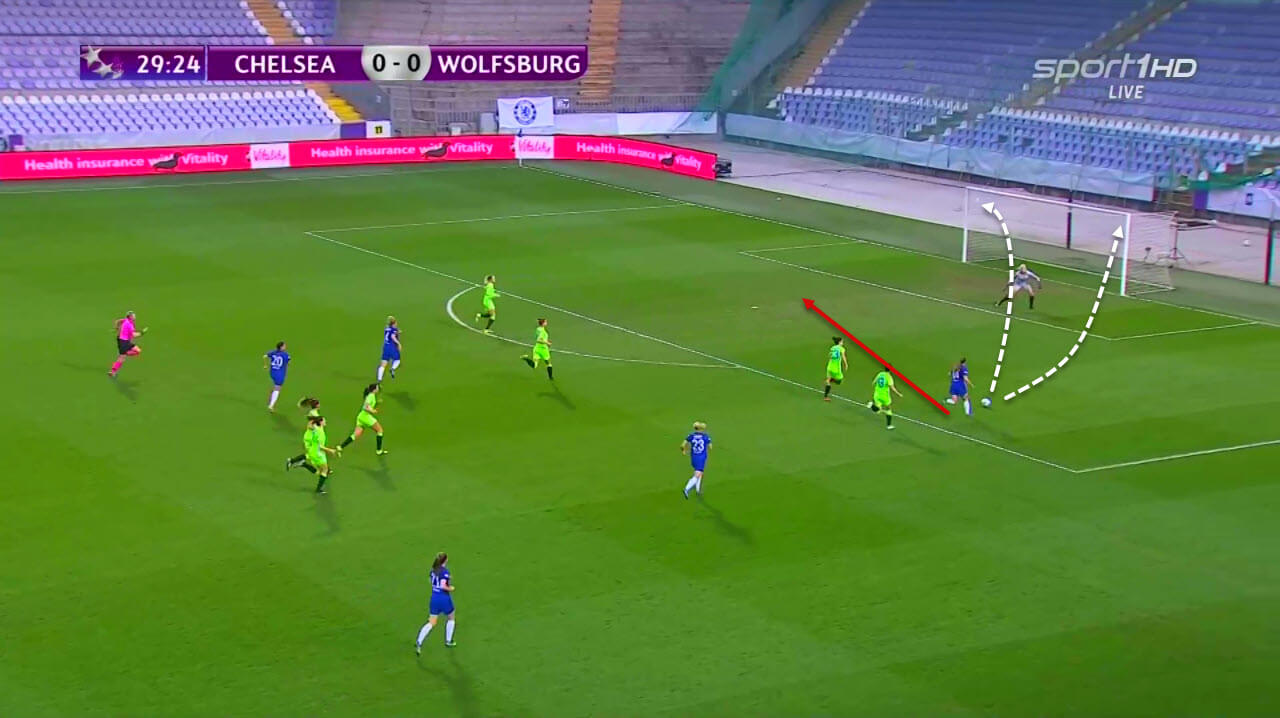 Wolfsburg then got other very dangerous chances mainly thanks to Huth’s crosses from the right-wing and Chelsea’s defence facilitated the mission even further for them since their marking inside the box was not good enough. You can see for example how in this action that happened in the second-half, how Rolfö was left alone and was able to orient her header without disturbance, but unluckily for her, it hit the post and went out.

And this chance resumes Wolfsburg’s performance. Even though they got a penalty and scored a fundamental away goal, they were not able to finish the excellent chances they created throughout the match. 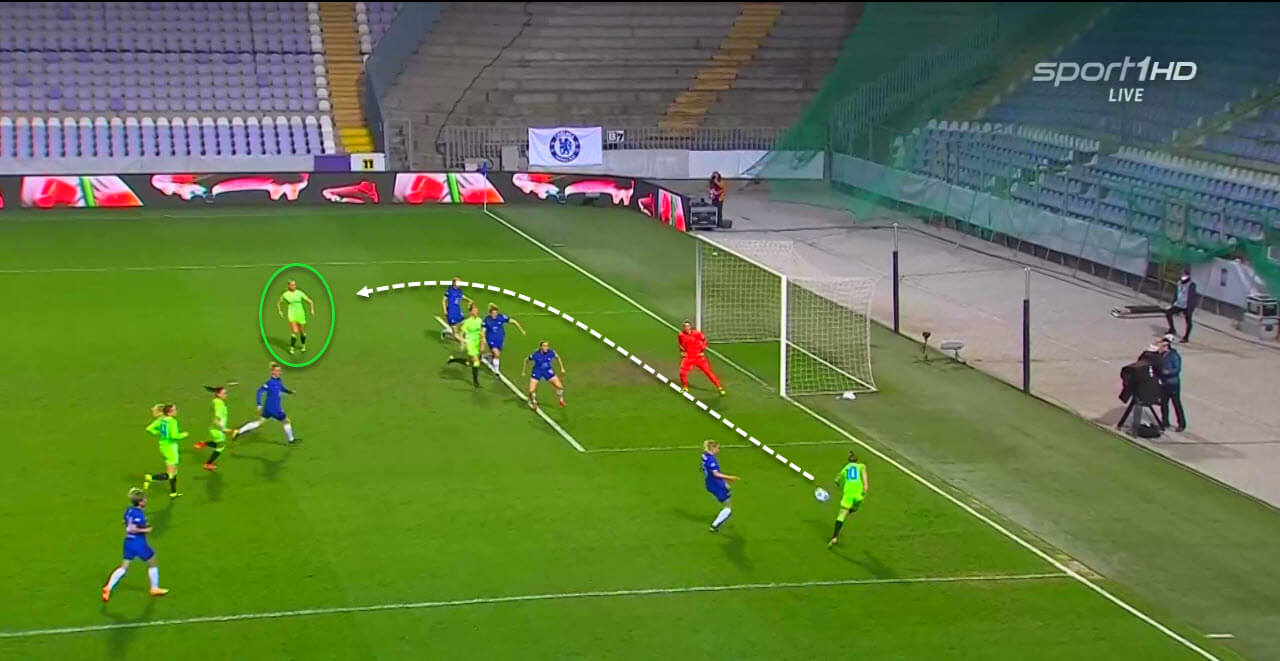 Chelsea were fantastic in succeeding to turn things around after they were defensively confused and conceded a lot of dangerous chances. With just 3 shots on target, they scored two goals and this realism and determination to exploit every chance as well as the talent and experience of their attacking players served them a lot against a very talented team like Wolfsburg.

In reality, Chelsea’s “awakening” started since the last minutes of the first-half, because following the mentioned Kirby chance, both Kirby and Kerr started playing the way they used to play in FAWSL and started relying on quick passing combinations like the one that happened at the 35th minute.

The chemistry and the movement without the ball allowed them to confuse the defenders and create danger out of nowhere. This chance for instance could have led to a dangerous opportunity if Kerr wasn’t in an offside position. And that helped Chelsea get a little bit more into the game and start threatening their opponents. 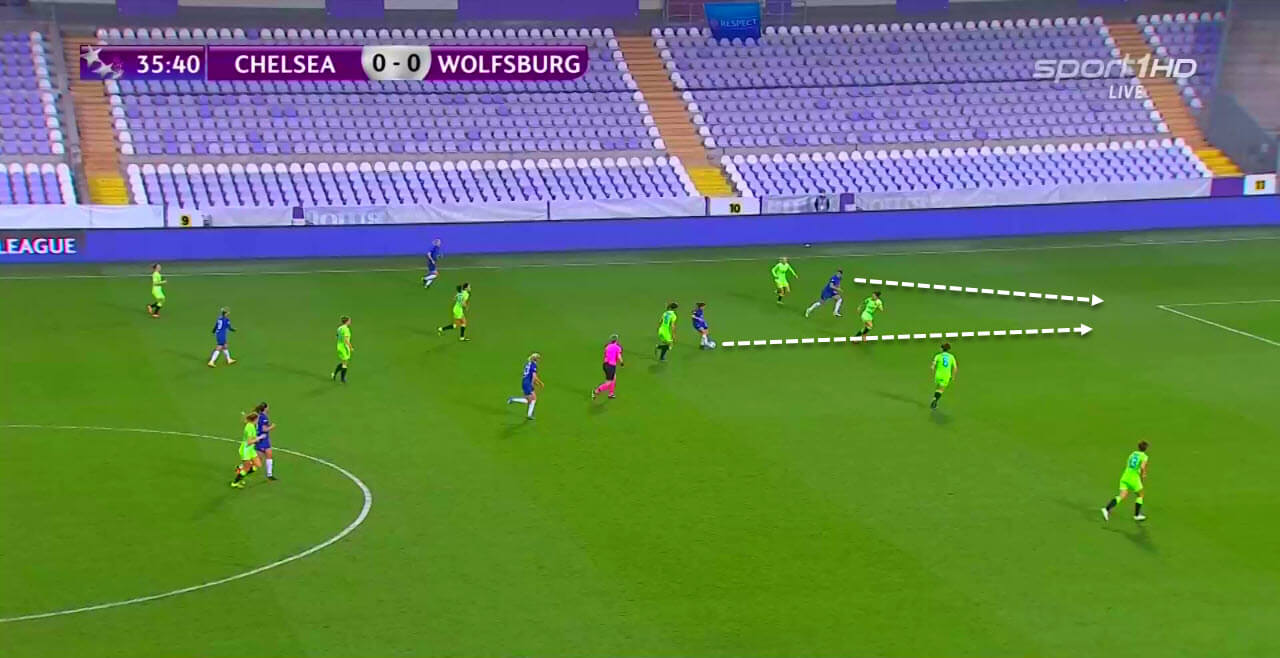 And at the 54th minute, Chelsea initiated a well-prepared attack, Ji got the ball and saw Kirby’s intelligent movement, passed to her without wasting time since she saw that it created a 2 on 1 situation, and Kirby then passed to Kerr who finished the action with a great goal. What was impressive in this whole action is how Kirby’s well-timed movement created all that mess in Wolfsburg’s defence.

She had two players relatively marking her and as soon as she saw Doorsoun-Khajeh getting out of her position to press high on Ingle, she instantly moved towards the free space left by Wolfsburg’s centre-back while knowing that Ji would pass to her.

The decision of passing automatically to Kerr as soon as she received the ball was also excellent since that allowed Kerr to be in front of the goal, even though she had to dribble and shoot from a difficult angle. And therefore, Kerr does also deserve a large part of the praise for the finishing qualities that she showed during this action. 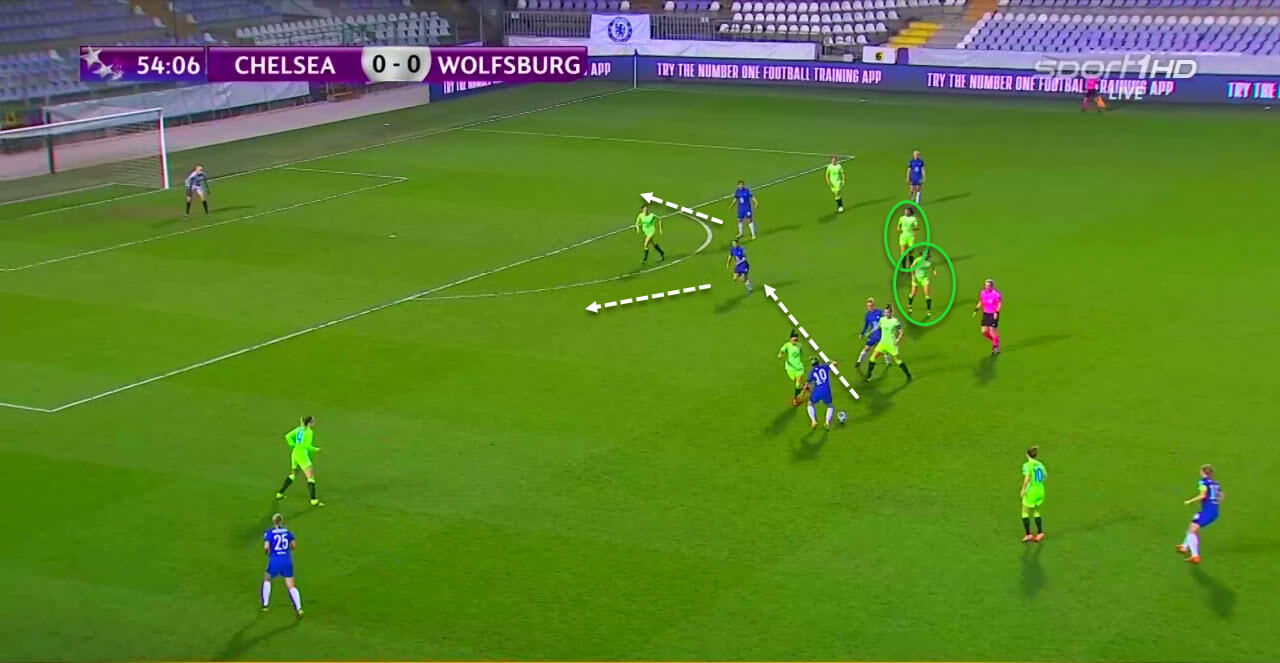 And just ten minutes later, Chelsea added the second goal following Kiedrzynek’s wrong pass which was intercepted by Kirby who instantly passed the ball in the direction of Kerr and Harder, and the latter was in the adequate spot to score with a first-touch. And once again, Kirby’s pressing was the origin of this important goal that will serve Chelsea a lot.

Chelsea were more realistic in this match and exploited Wolfsburg’s wasted chances to believe in their abilities to win this match, and this was clear during the second-half even though they continued conceding dangerous chances during this half as well. And if they want to qualify to the semi-final, they will need to focus more on marking Wolfsburg’s wingers tightly and avoid keeping players unmarked inside the box. And this was Chelsea’s main weakness in this first-leg.

Also, it should be said that Berger was pivotal in preventing Wolfsburg from getting a draw or even winning the match since they got some chances even after Janssen’s scored penalty. Berger saved 9 Wolfsburg shots including 4 supersaves, with a percentage of 90% of the total shots, and for goalkeepers, this is a huge number.

Chelsea will now have some time to think about not letting Manchester City and Manchester United get closer to them in the FAWSL standings by securing a win against Aston Villa, and then they will have to fully prepare for the crucial UEFA Women’s Champions League second leg against Wolfsburg.

While the German side will face Sand on Sunday before hosting Chelsea for the second-leg. Wolfsburg will certainly try to score early in the game in order to regain their qualification hopes and try to facilitate their mission, and Chelsea will have to focus on remaining solid in defence, mark Wolfsburg’s attacking players throughout the match while trying to exploit the counter-attacking chances that they will get when Wolfsburg leave spaces at the back.