Unavoidable circumstances saw UEFA Europa League and UEFA Champions League be reduced to a one-leg tie in the knockouts. Inter Milan vs Bayer Leverkusen could be judged as the most interesting tie in the Europa League quarterfinals, however, the perception may vary, and with a one-legged affair, it was bound to be more thrilling.

The tactical battle in this fixture was colossal and Antonio Conte edged his counterpart, Peter Bosz, in both the departments – out of possession and in possession.

This tactical analysis will dive into the tactics of both the managers and decipher how exactly did Antonio Conte get the better of Peter Bosz. 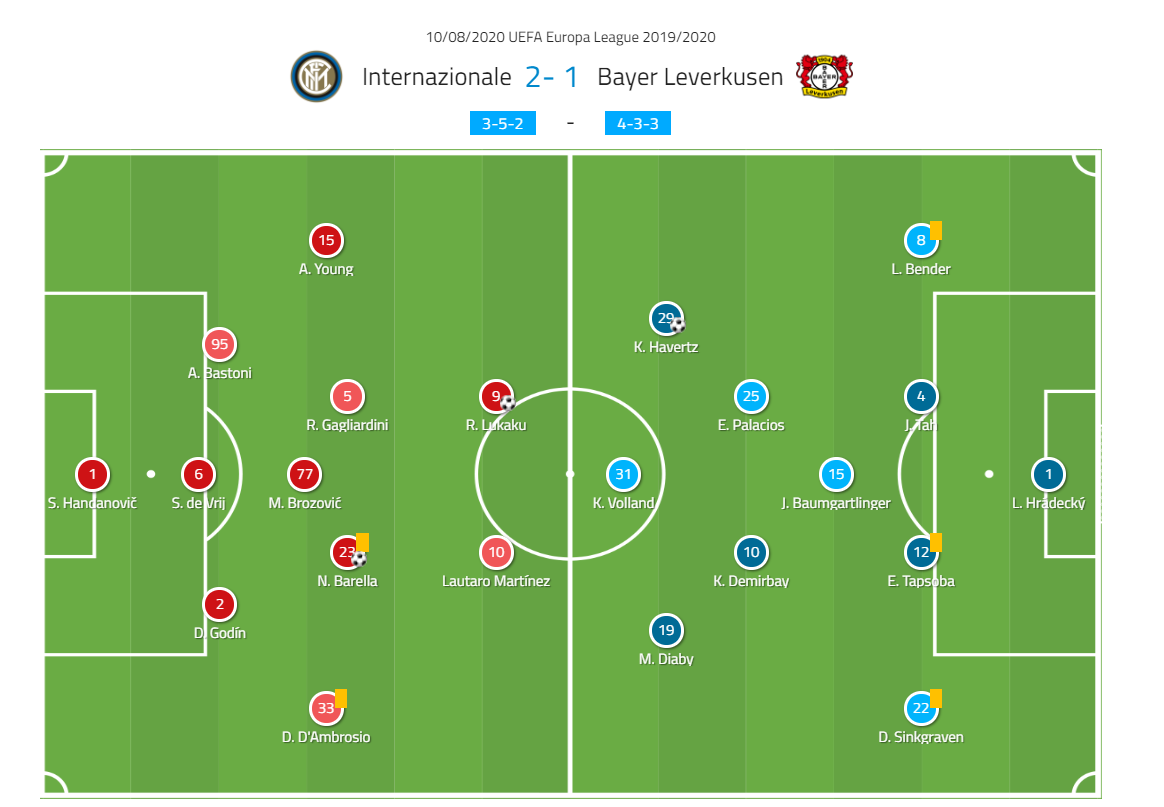 Peter Bosz started with a formation which he hardly used throughout the season. The much utilised 4-2-3-1 and 3-4-3 changed to 4-3-3 which saw Kai Havertz and Moussa Diaby on either side of Kevin Volland. Exequiel Palacios, Julian Baumgartlinger, and Kerem Demirbay sat in the heart of the midfield. The defence saw only one change from their previous fixture against Rangers as Jonathan Tah replaced Sven Bender as the right centre-back.

The successful story of Inter’s press

The constant change in tactics by Peter Bosz to counter Conte’s high press was an enthralling battle. The battle was to free up Daley Sinkgraven to build-up from the back for Peter Bosz and for Conte to either block a passing lane to him or prevent the progression of Leverkusen through the left-back.

Why did Bosz emphasise on building through Sinkgraven? The answer lies in Inter’s pressing mechanism.

The two Inter strikers marked the centre-backs closely. Brozović would initially stay at a distance from Baumgartlinger, but at a distance where the Austrian could be easily marked if the ball was intended for him and Barella would initially mark Demirbay. The other Leverkusen midfielder was followed by Gagliardini. Young would position himself a bit away from Bender but at a distance where he could latch onto the Leverkusen right-back in case the ball was played to him. However, the other wing-back D’Ambrosio would sit deeper in order to prevent Godin to go one-on-one with Diaby’s pace. That’s the reason the battle throughout the game was to build-up through Sinkgraven and to prevent the build-up through the Dutch left-back. 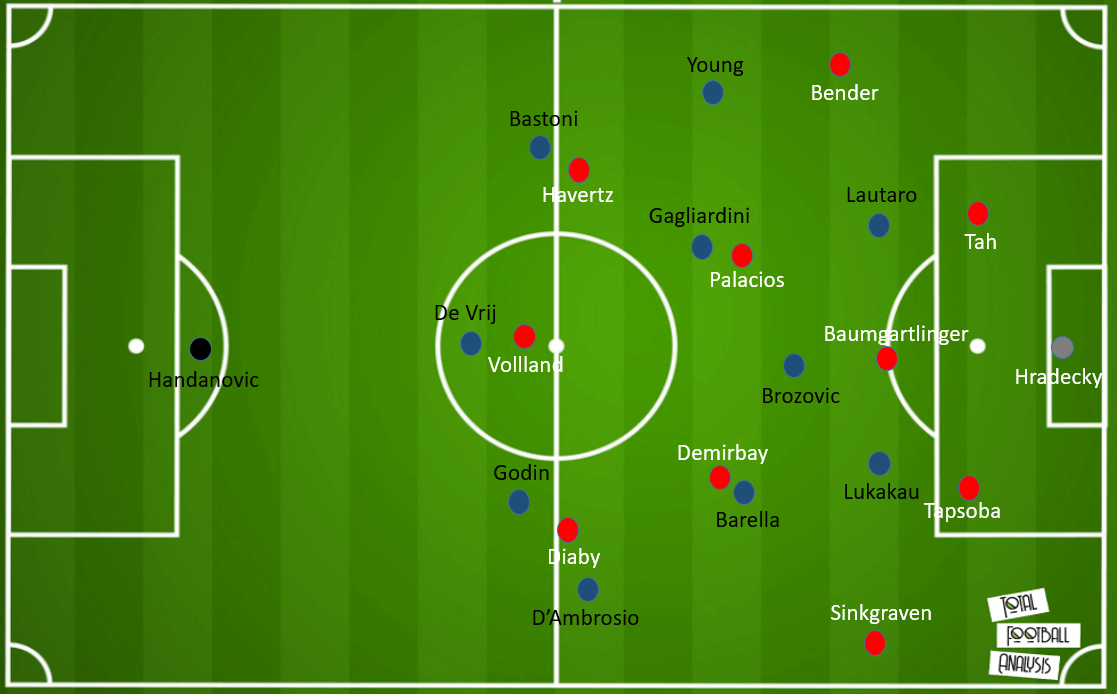 When the ball would be played to Sinkgraven, Barella would quickly move on from marking Demirbay to press Sinkgraven on the flanks and either Brozović or Godin would make a co-ordinated jump to press Demirbay. Sometimes, D’Ambrosio would move up from his position to press Singraven and the initial structure would remain as it was with Barella still marking Demirbay, which was rare.

Inter was largely successful in their press and that prompted a tactical battle between the two gaffers with Bosz trying to create a separation of Sinkgraven from Barella and Conte trying to adapt to the situation.

The first card the Dutch manager played was to push Demirbay further up in between Inter’s second and last line of defence. Keeping in mind, Barella might move up along with him and it would create a separation from Sinkgraven which would give him an ample amount of time and space to progress the ball. However, Barella stuck to Sinkgraven and Godin followed Demirbay. 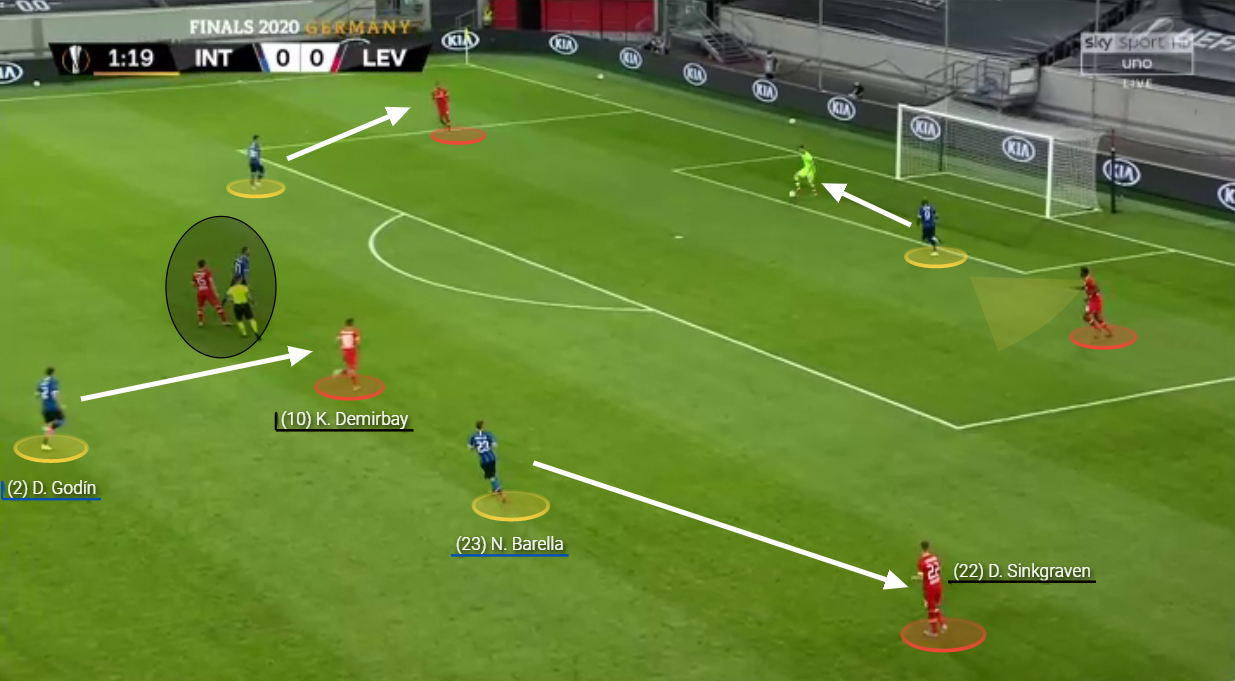 The second card Bosz played was to push Demirbay further left (from Inter’s perspective). It would create separation from Sinkgraven and create space for him to progress the ball. 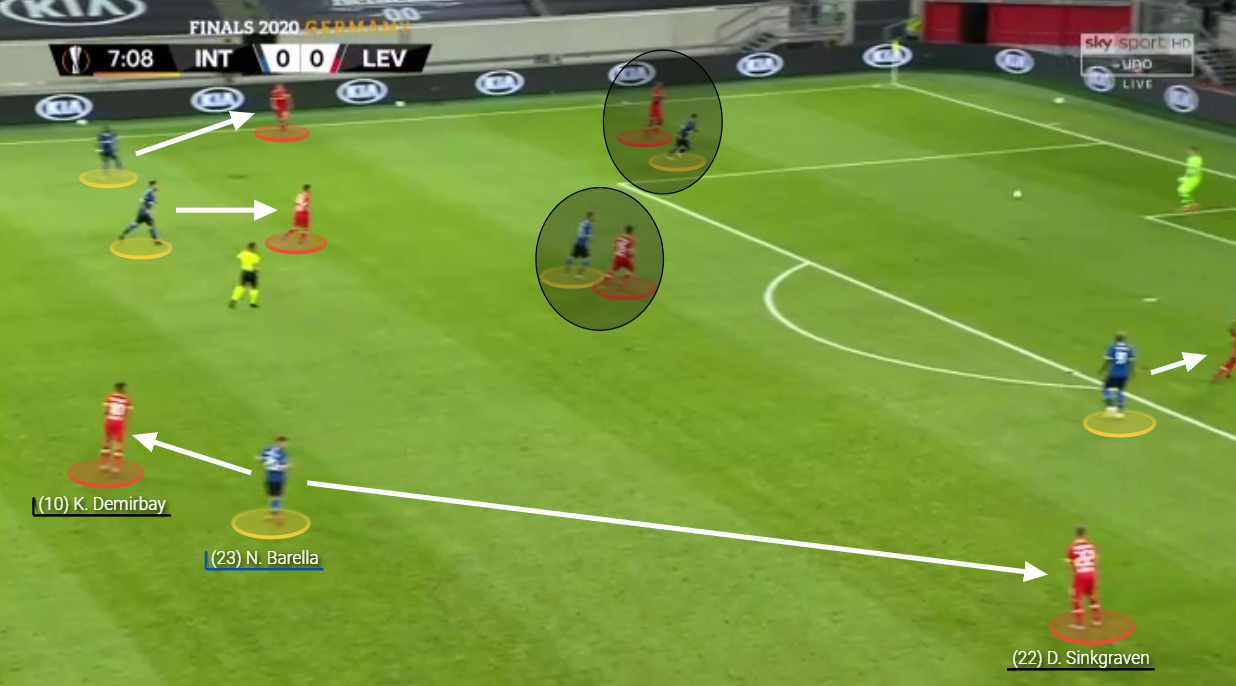 As you can see, in the above image, Barella is constantly looking at Sinkgraven and identifies the distance between him and the Dutch left-back. Leverkusen’s goalkeeper finally found the left-back and he had a bit of time to progress the ball. He did find another pass in the form of Demirbay. However, Demirbay again found Godin breathing down his neck. Bosz once more found himself on the losing side of the tactical battle. 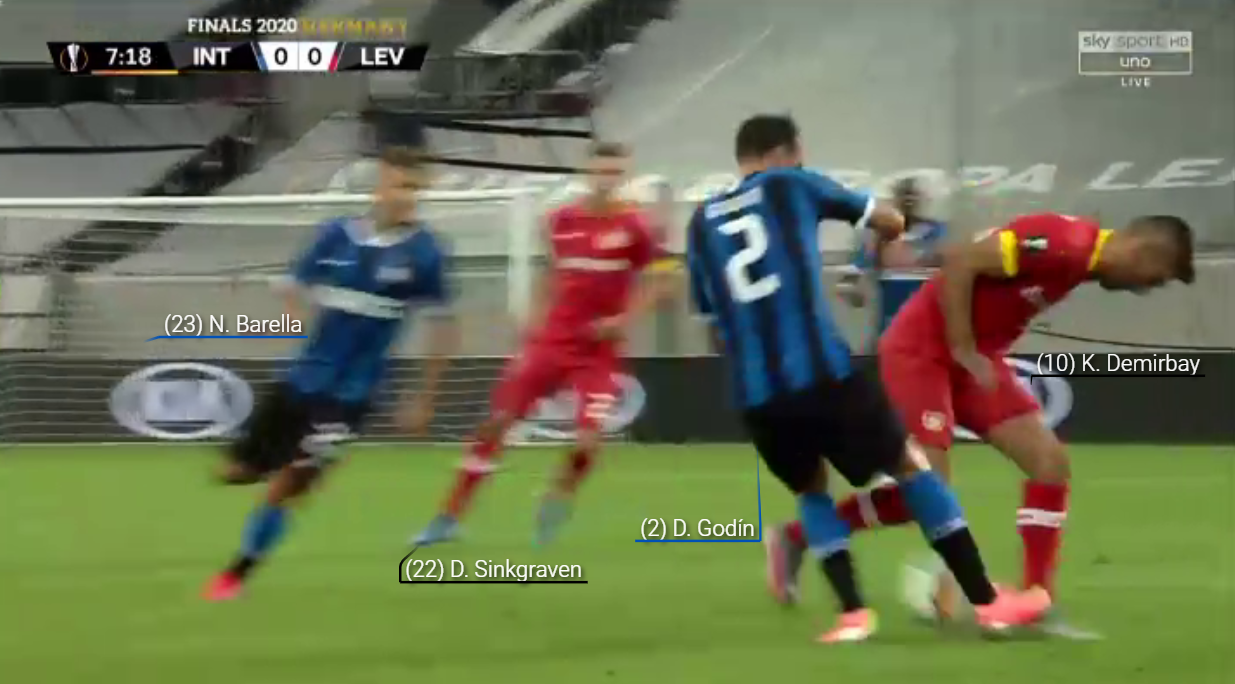 The battle of football is more a battle of chess than chess itself. The battle continued and the Leverkusen gaffer made another move by instructing Demirbay to go deep and Havertz to occupy Demirbay’s position. It would have developed two passing lanes for Leverkusen – One to Sinkgraven and another to the dropping Havertz. This move could have worked if not for D’Ambrosio taking the charge of marking Sinkgraven and de Vrij not following the Leverkusen star. 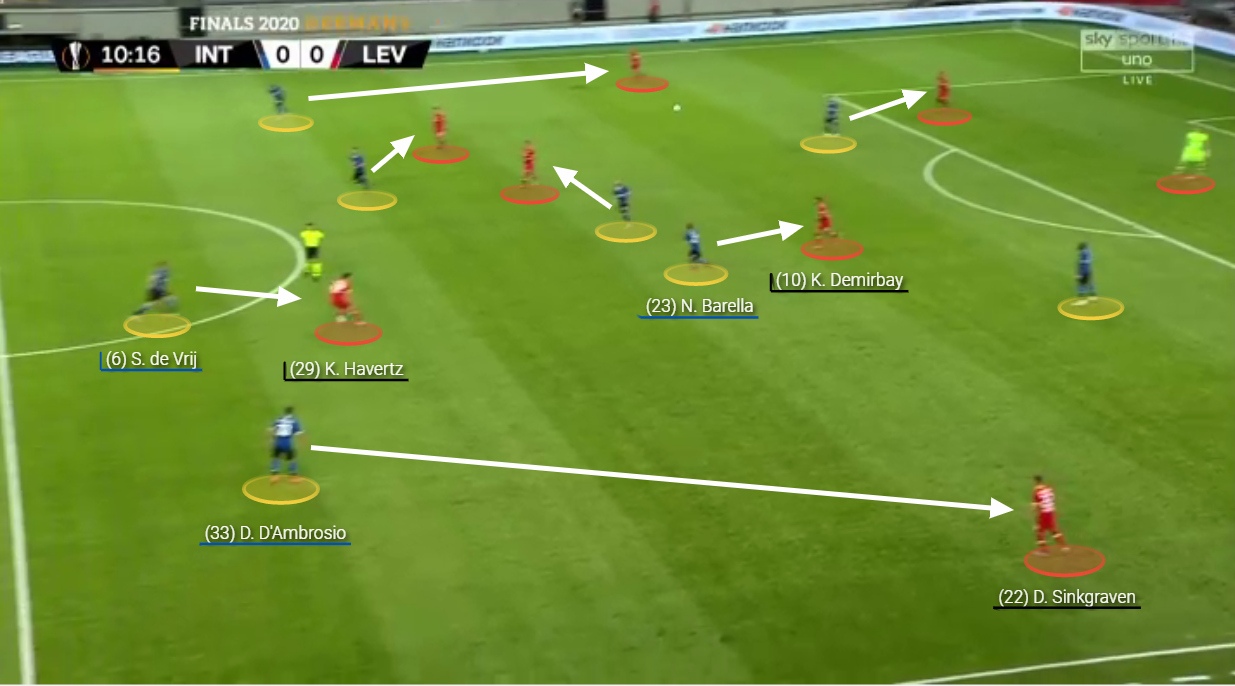 It looked like no move or cards would make a difference. However, finally, the Leverkusen gaffer found the key to open the lock. You could see, a similar structure in the image below. But now, instead of an aerial ball from the goalkeeper, Leverkusen made use of the little distance that Baumgartlinger had on Brozović. Leverkusen played a short pass to the Austrian midfielder. The Austrian midfielder quickly released the ball to the dropping Havertz. Havertz was followed by Godin but created a separation where he could take two or more touches and progress the ball and that was Leverkusen’s first successful build-up from the back in the 30th minute. 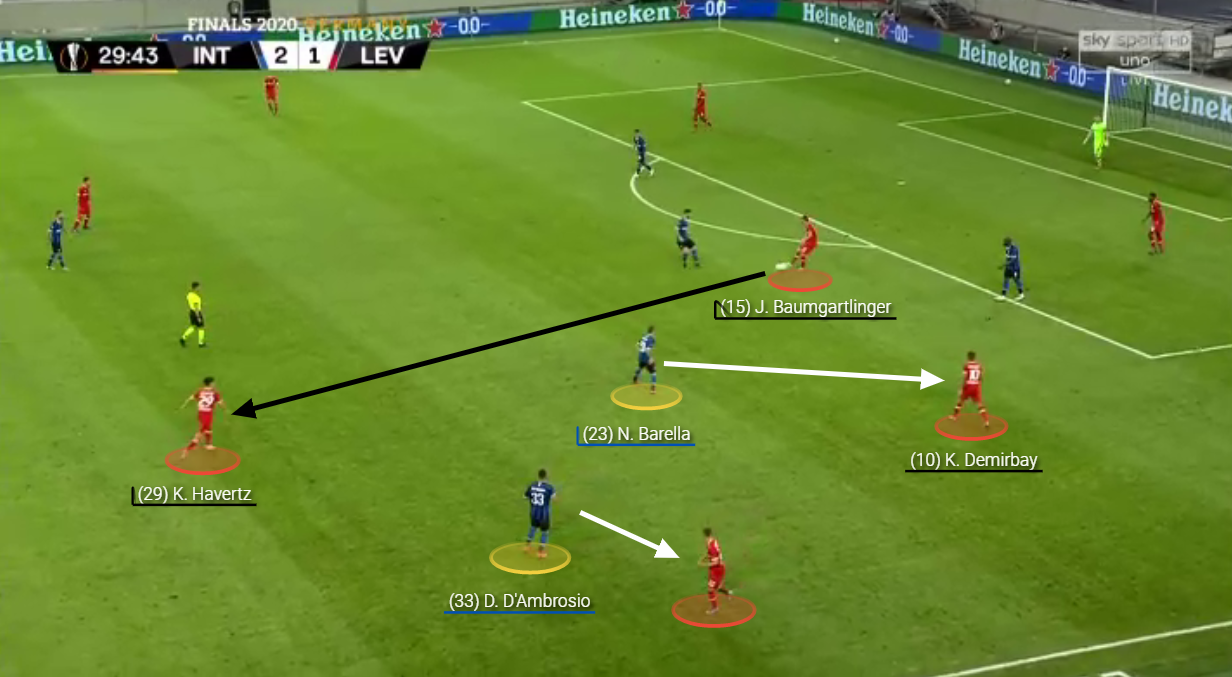 However, it did not last long and Godin or the other players were quick in following the German star from thereon. Leverkusen could only use the same build-up pattern once more in the entire game and that was it.

The part where Leverkusen lost the match 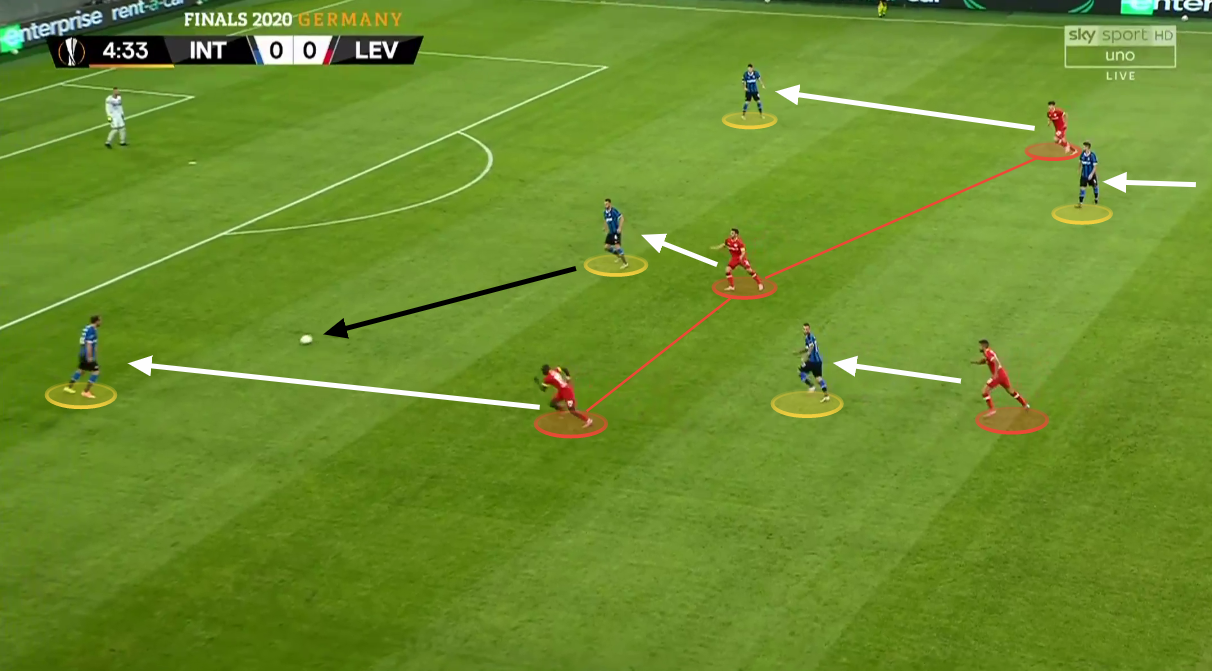 Inter had a strategy drawn and it was a part of the plan. The centre-back would play among themselves and then pass the ball to the goalkeeper to lure in the Leverkusen first and second line of press. When Inter would successfully lure in the Leverkusen players, Handanović would play a long ball to Romelu Lukaku and Inter would find themselves in a  2 on 2 in the central corridors and we all know the ability and communication between the big-man and the small-man, up front. 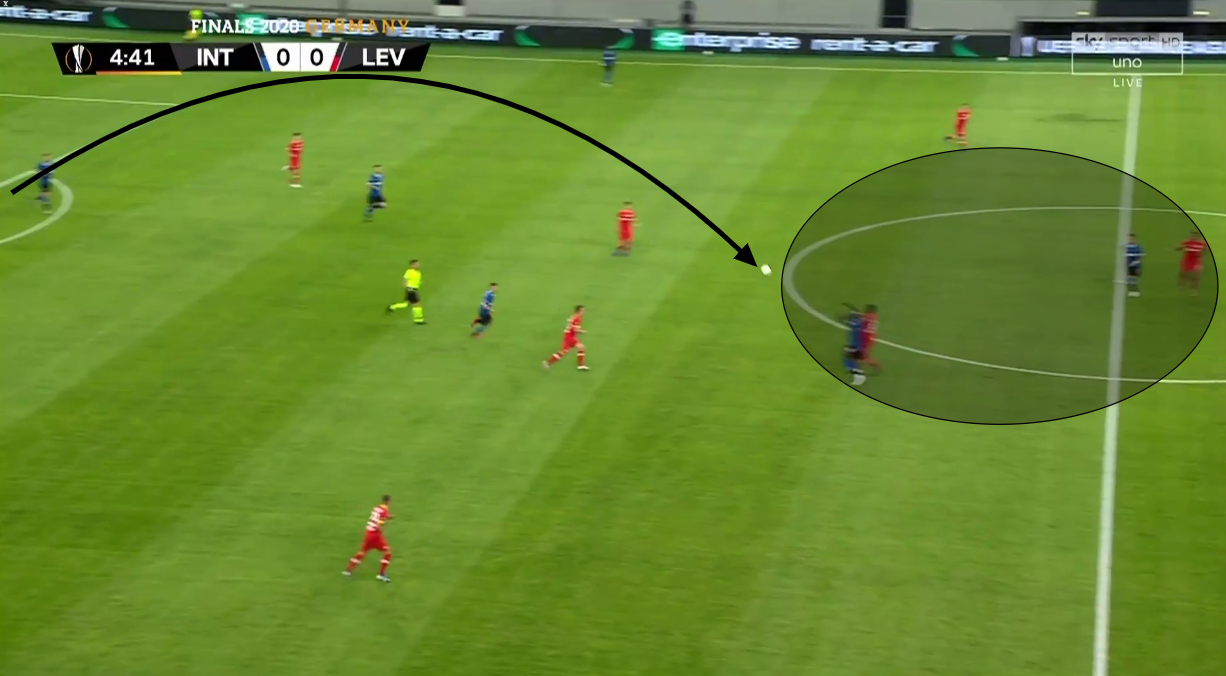 To protect the central corridors in the last line of defence, Bosz instructed Sinkgraven not to push higher and give protection to the centre-backs. However, this created a situational crisis and overload on Baumgartlinger. 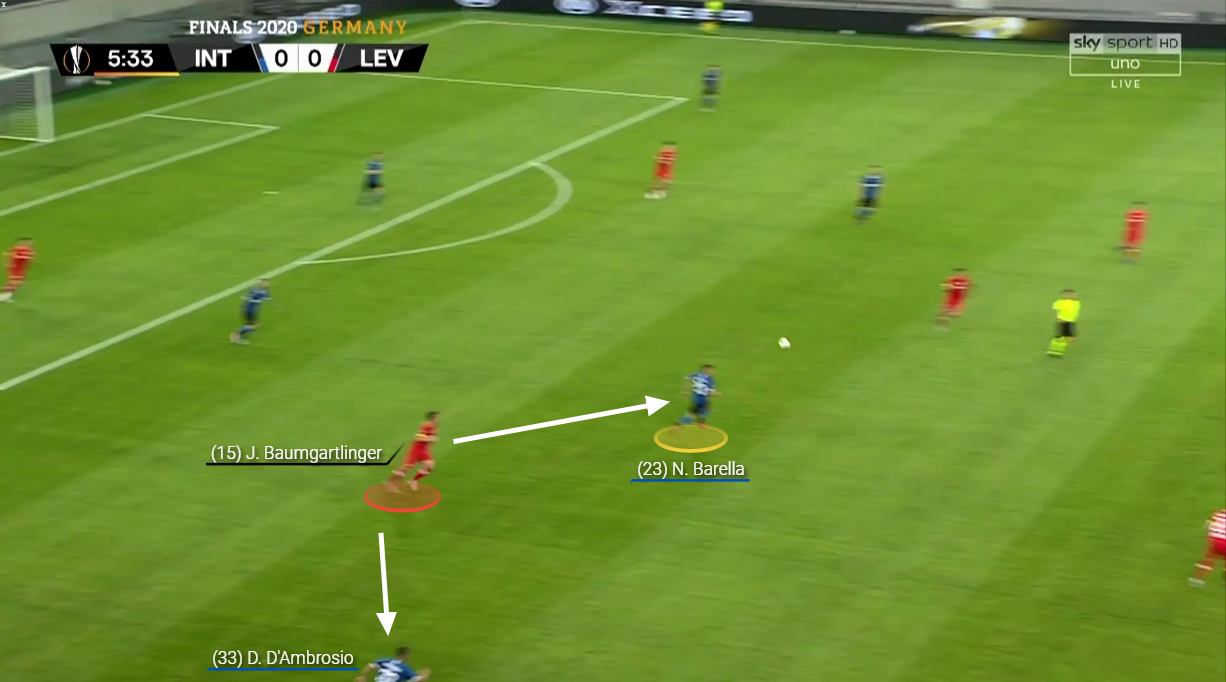 It did not matter in the end as Handanović took the similar route and passed the ball to Lukaku. Lukaku shielded it well and when Edmond Tapsoba got too close to the big man, he turned away from the defender and passed it to his striker partner, Lautaro Martínez. 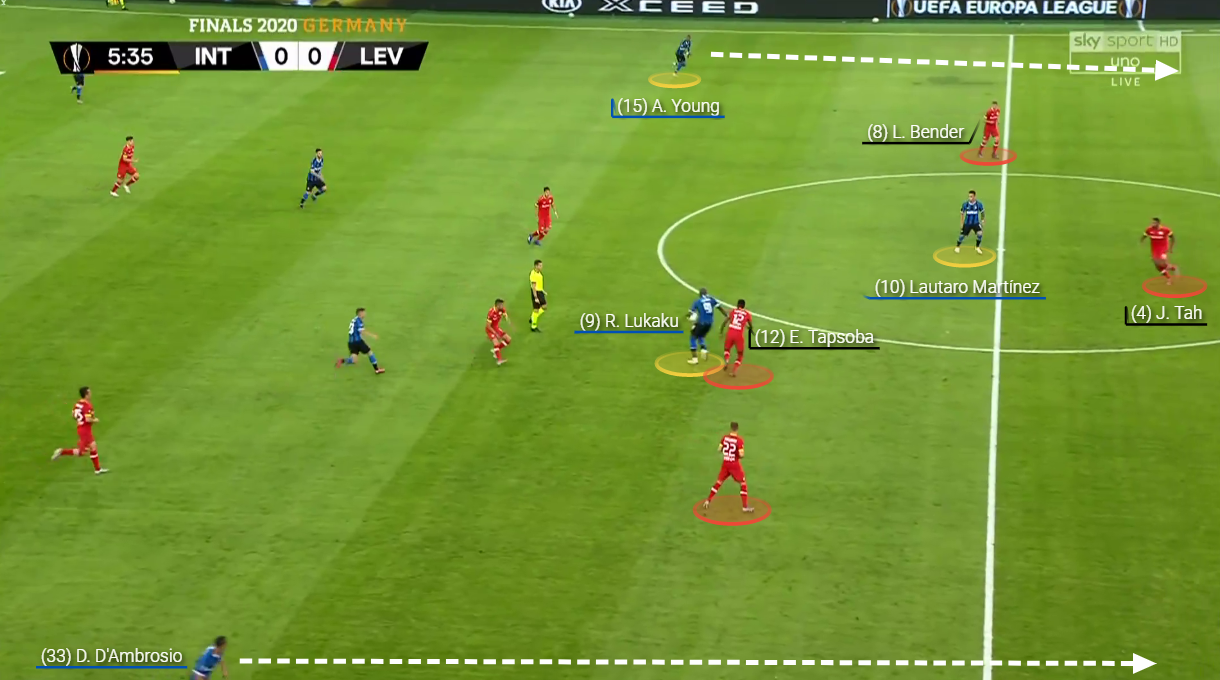 The wing-backs have already started their run. Once the ball was played to the Argentinian, he played a first-time pass to the right wing-back, D’Ambrosio.

The same tactics, again and again, could easily fall prey to Leverkusen. So, Conte along with the usual routine chalked up a few other modes of build-up. He started to push Barella wider to the flank and D’Ambrossio higher as Sinkgraven was staying deep in his line, which meant one of the midfielders who would be marking Barella would also move towards the flank. It would create space in the midfield for a striker to drop deep and open up a passing lane and can create better opportunities. 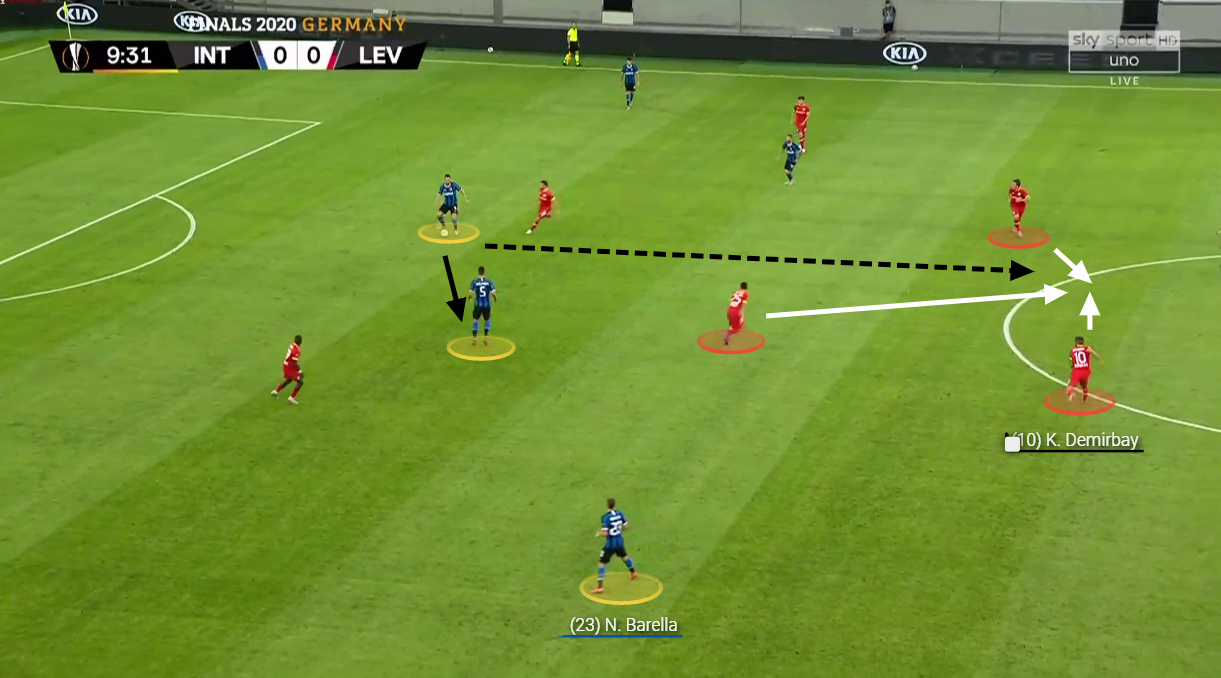 As you can see in the image above, de Vrij tried to play the ball to Martínez (not in the picture). However, all three midfielders identified the threat and were converging upon the Argentinian. de Vrij instead passed the ball to Gagliardini. The move didn’t materialise but it created a situational crisis for Leverkusen and opened up other possibilities for Inter.

With the threat of Martínez dropping deep, Demirbay stayed more central, trying to protect the pass to the dropping Martínez and left enormous space for Barella to operate. 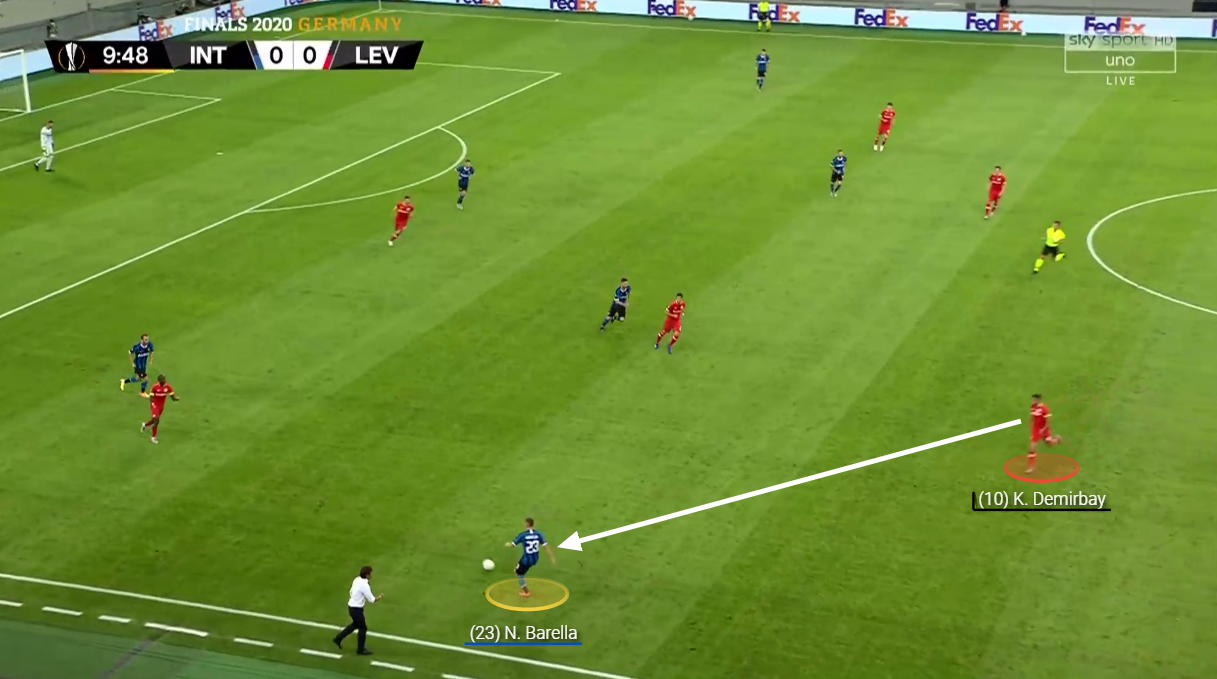 Barella had the time to receive, change the body orientation to face the goal, and progressed the ball by playing a long ball. Again, Inter created a 3 v 3 situation through their build-up pattern. 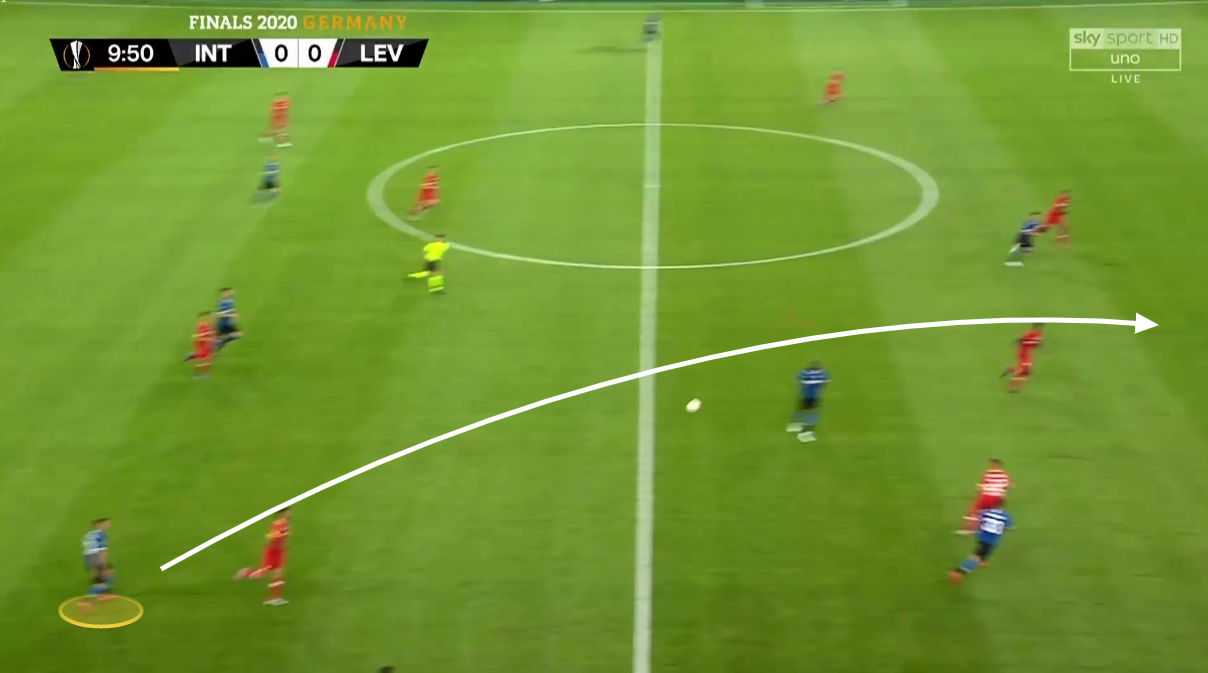 To prevent the distance created between the Leverkusen front six and the back four, Leverkusen changed their approach from high block to mid block, and to Die Werkself’s dismay Conte had the answer to that too.

With Leverkusen defending in a mid block and no one putting pressure on the centre-backs, de Vrij opted to go long behind the Leverkusen centre-back. Martínez’s pace helped him to reach the ball faster than Tah facing the front of the goal. The move opened the scoring for Inter. 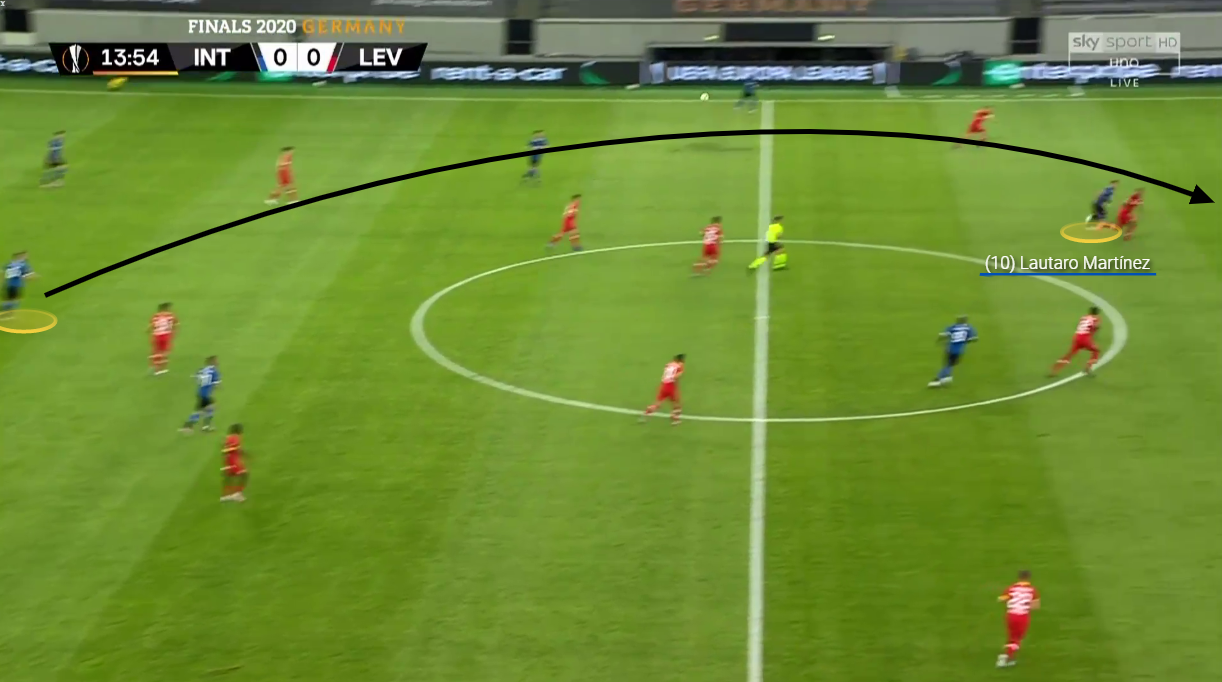 Leverkusen had no answer to Conte’s build-up patterns throughout the match. Handanović was crucial to the Inter build-up initially. The Slovenian played 26 passes and 25 of them reached the destination. He utilised Lukaku’s aerial ability and the ability to hold the ball by playing five long balls with an accuracy of 80%. Then by mixing the routines well, Inter hardly struggled to build-up from the back.

Lautaro Martinez is a very intelligent footballer. Apart from his enormous ability on the ball. His off the ball movement confuses the opposition and puts them in a fix. 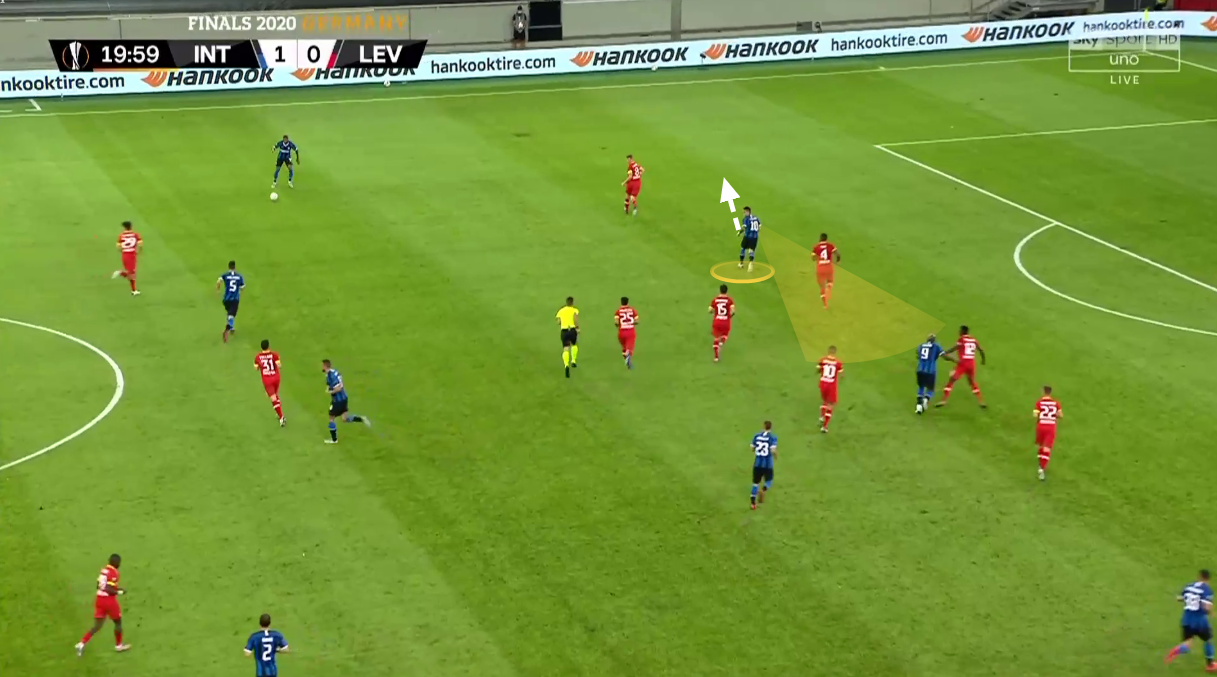 Here, Lautaro observes he can put Lukaku in a better position if he drags away Tah. He quickly initiates the move and drags away the Leverkusen defender. 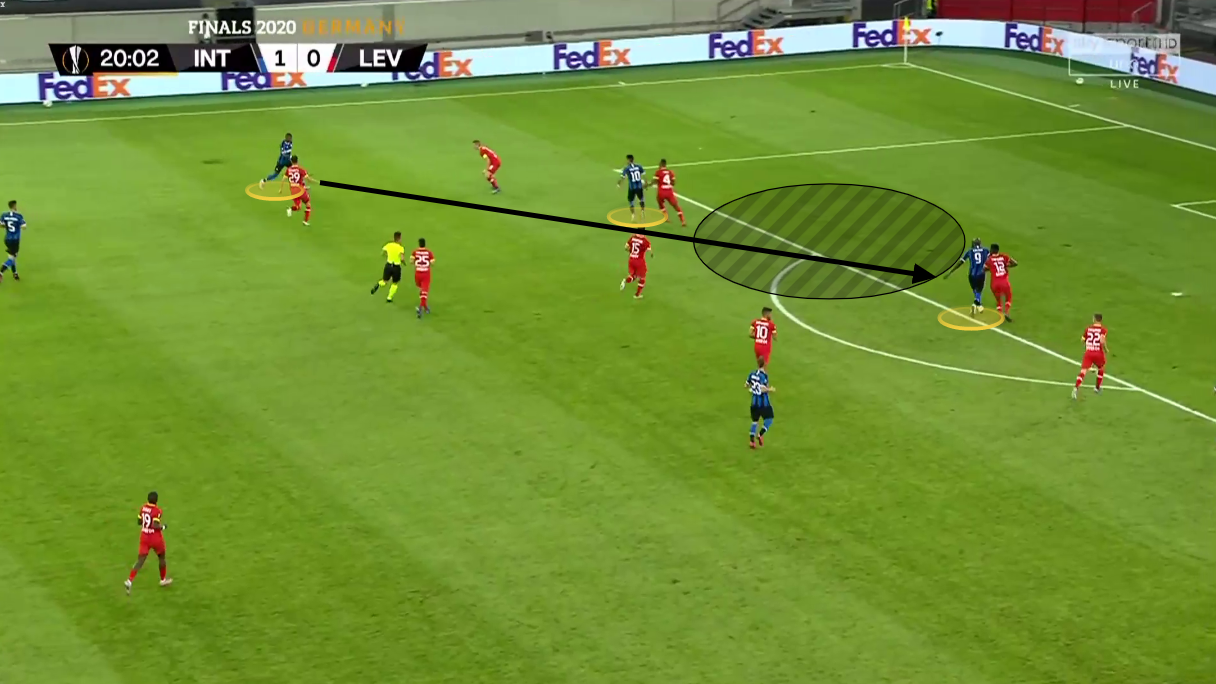 Once Lautaro drags away the defender, there is an unhindered passing lane for Young to pass the ball to Lukaku and it produced the second goal for Inter.

Even in the image below, Lautaro realises he and D’Ambrosio have created an overload on Sinkgraven. 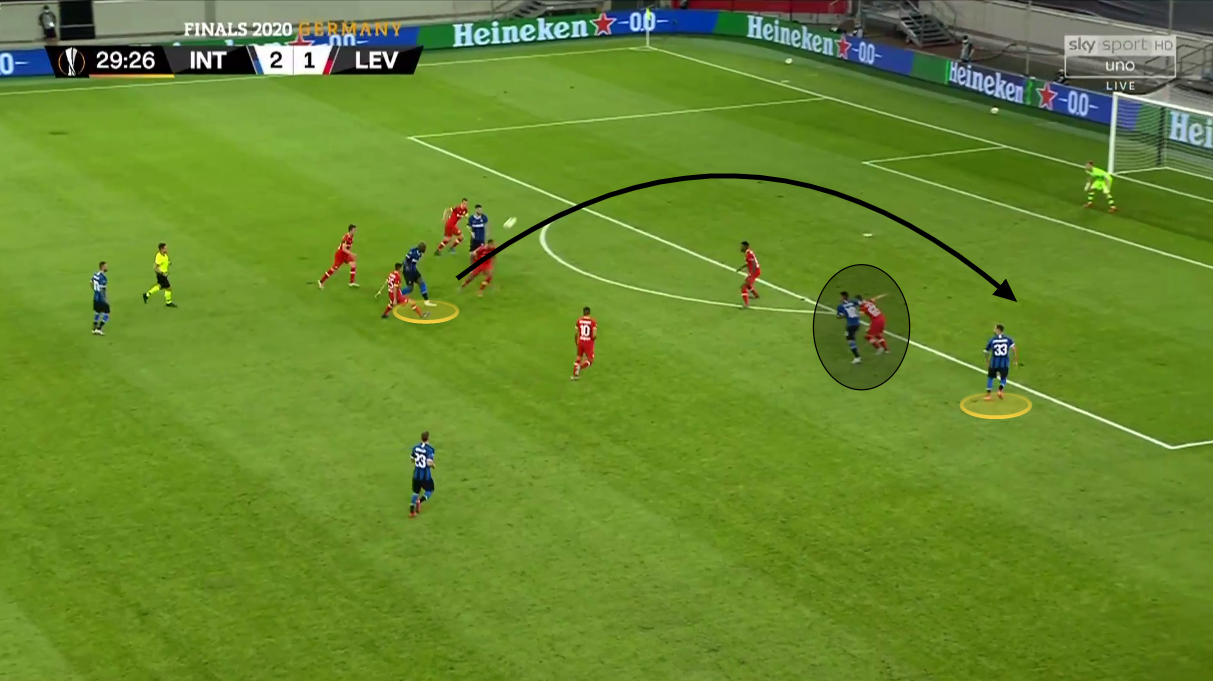 He quickly drags the Dutch left-back’s attention to himself which creates a lot of space for the full-back. However, Lukaku’s pass was poor and an opportunity got wasted.

Lukaku and Lautaro play the small-man big-man role to perfection. Not only Lukaku wins the aerial ball for Lautaro but also holds off the opposition to play in a through ball for his strike partner. 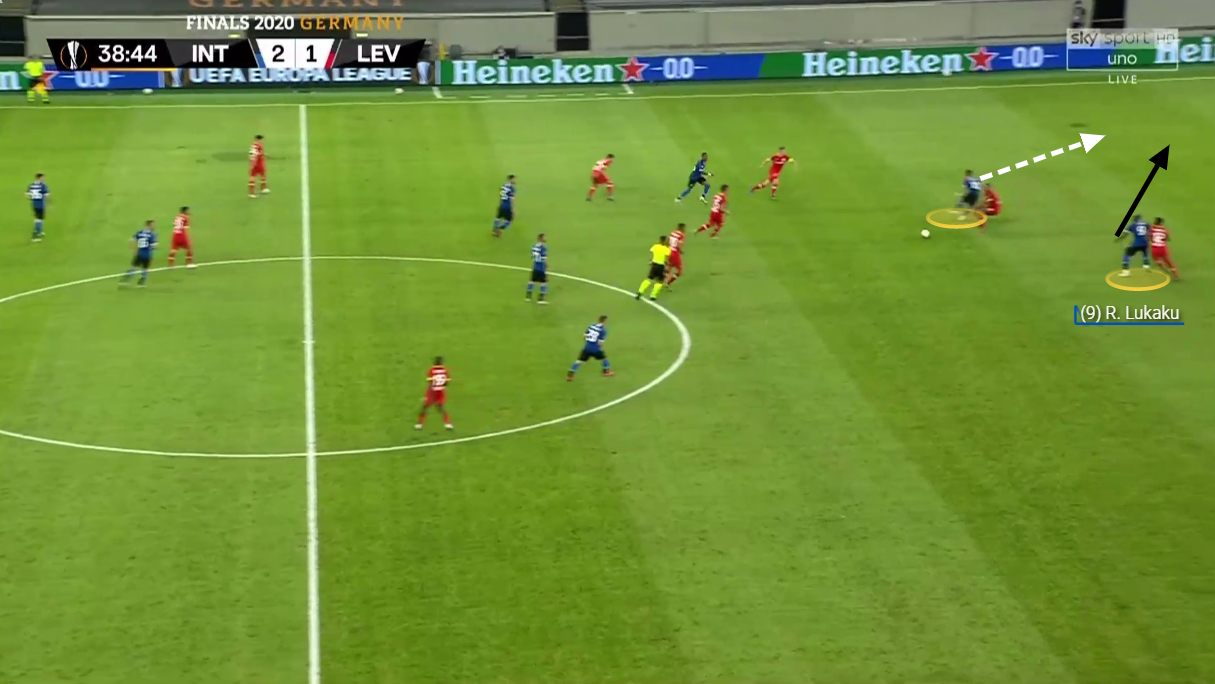 Here, Tapsoba was onto Lukaku but the Belgian used his strength well and held off Tapsoba. Once Young passed the ball to Lukaku, the former Manchester United striker played a first time ball to the Argentinian. The Argentinian first moved in dragging Tah along with him. Tah was facing the back of his goal and his body orientation was towards Lautaro, the Argentinian utilised the situation and quickly made an outward run past the German defender.

The tactical battle was undoubtedly won by Antonio Conte on both ends of the field as discussed in this analysis. The first half entirely belonged to Inter, even though Leverkusen scored a goal. The second half belonged partially to Leverkusen as Inter started to protect the lead and played into the hands of the German club. However, the German club couldn’t influence the scoreline.

Bayer Leverkusen had too much to play for. Europa League win would have given them entry to the Champions League next season and possibly could have kept their most prized asset to themselves. Now it’s a matter of time for Havertz to leave his childhood club and Leverkusen have to stay content with playing the Europa League once again.