Borussia Mönchengladbach travelled to Milan to take on Inter in the UEFA Champions League. After Inter went ahead early in the match, Gladbach dug themselves out of the hole and took a 2-1 lead before ultimately conceding off of a corner in the 90th minute.

This tactical analysis will examine the tactics used by both Marco Rose and Antonio Conte in their Champions League match. The analysis will examine Gladbach’s build-up against Inter’s press, Inter’s use of third-man passes to get forward, and how Lautaro Martinez created space on the right flank with his movement. 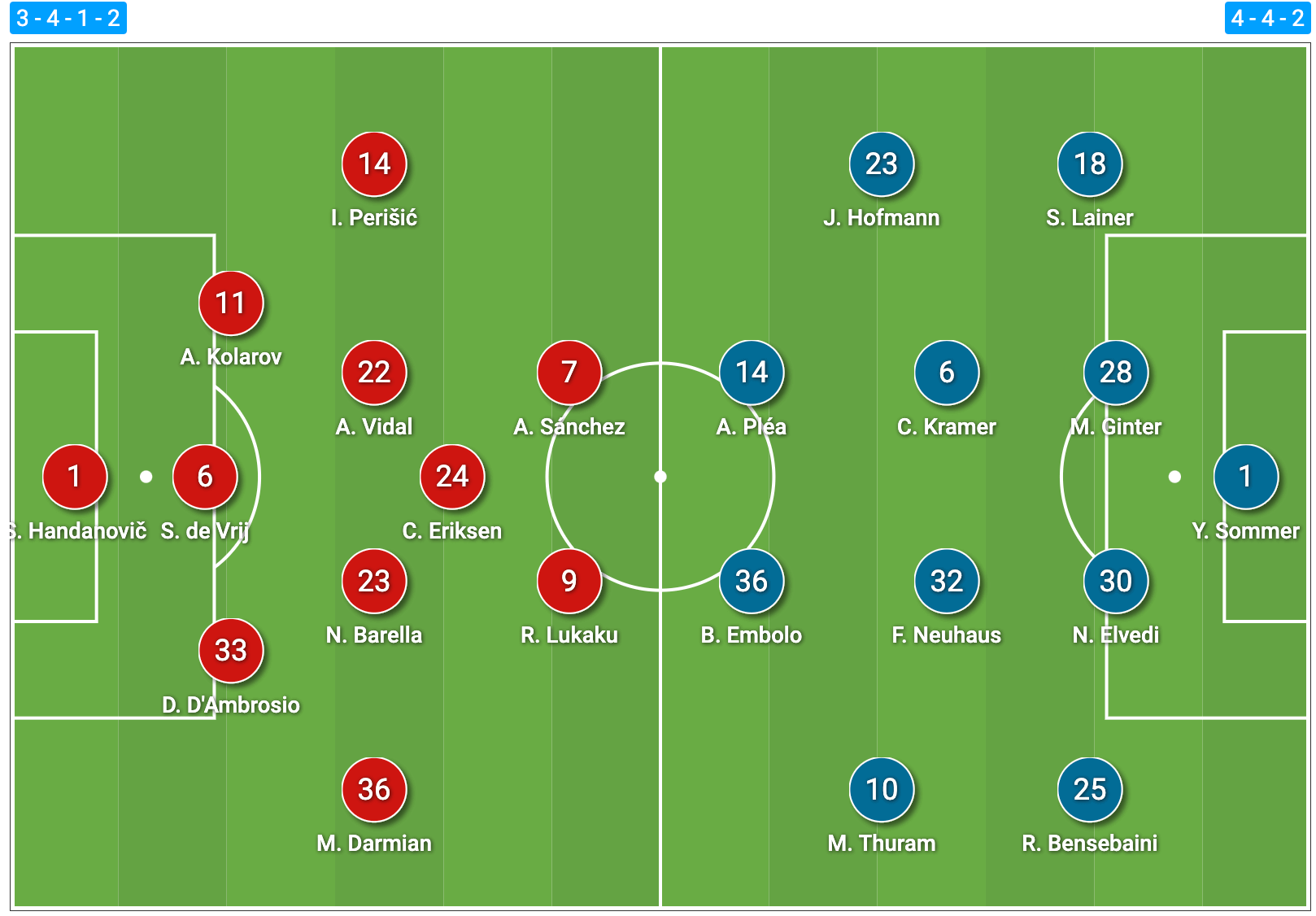 Marco Rose sent Gladbach out in a 4-4-2 diamond with Yann Sommer in goal. Nico Elvedi and Matthias Ginter started as centre-backs with Ramy Bensebaini as the left-back and Stefan Lainer as the right-back. Christoph Kramer worked as the holding midfielder with Florian Neuhaus, Breel Embolo, and Jonas Hofmann in front of him. Their strike partnership consisted of Marcus Thuram and Alassane Plea.

Antonio Conte stuck with Inter’s typical 3-4-1-2 formation with Samir Handanovic in goal. Aleksandar Kolarov, Stefan de Vrij, and Danilo D’Ambrosio started as the back three. Arturo Vidal and Nicolò Barella started as the holding midfielders with Christian Eriksen in front of the pair. Matteo Darmian started on the right flank while Ivan Perišić started on the left. Alexis Sánchez and Romelu Lukaku were the two forwards for Inter.

Gladbach’s build-up against the press

As expected, Gladbach looked to build from the back. Inter’s man-oriented 3-4-1-2 press created problems for Gladbach as Inter had a clear numerical advantage in the centre of the pitch. An image of the Inter’s press is below. 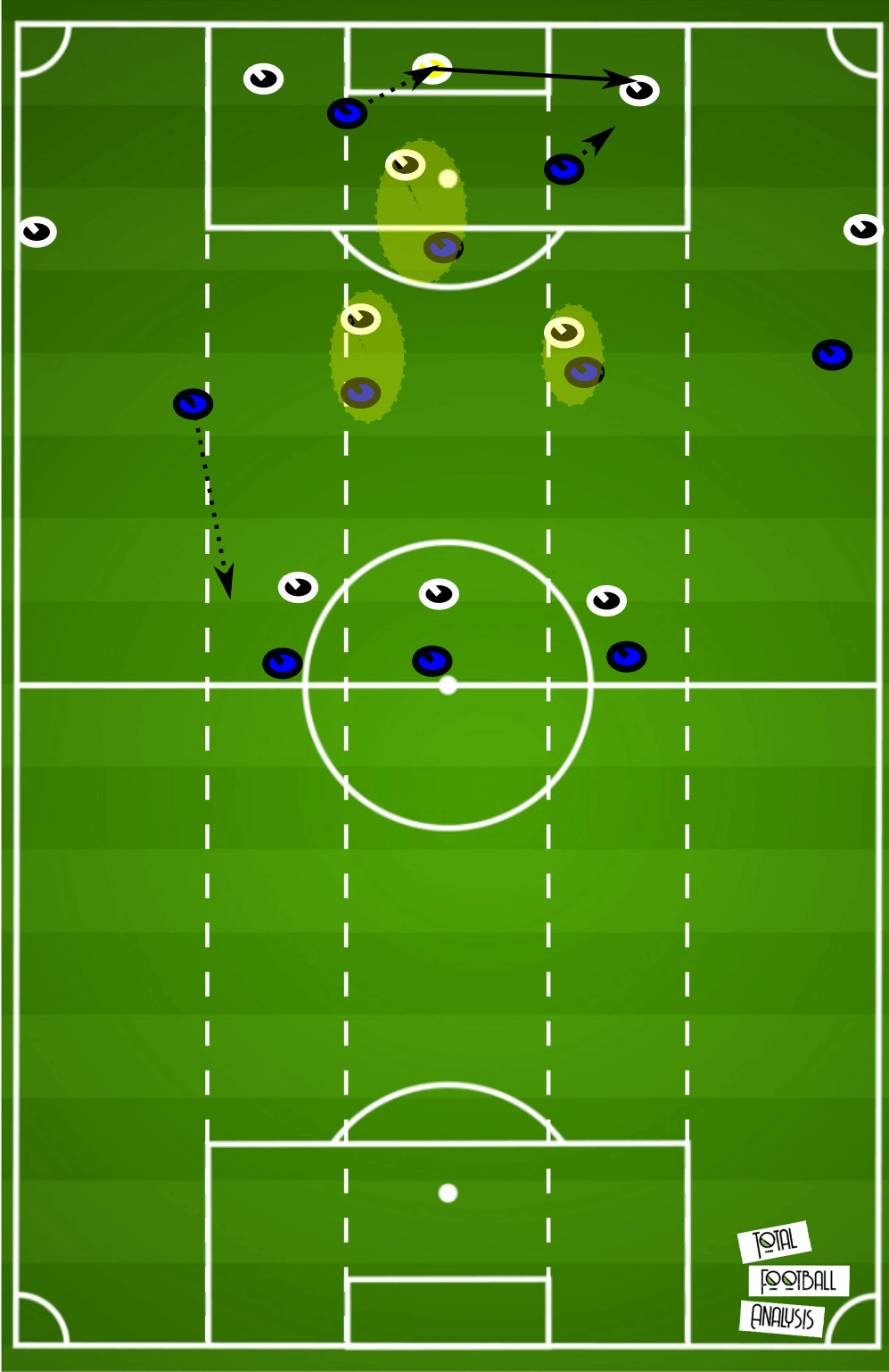 Inter would pressure the goalkeeper and the centre on the side where the ball went with their two strikers. If the ball went to Elvedi, the left centre-back, Alexis Sanchez would close down Sommer as an option as Lukaku looked to prevent interior passes while pressuring Elvedi. Gladbach were using three midfielders at the time, inviting pressure from Eriksen, Barella, and Vidal higher up the pitch. Inter’s wingers would pressure Gladbach’s outside backs on the near side, and on the far side they would tuck down and in, looking to support their back three. 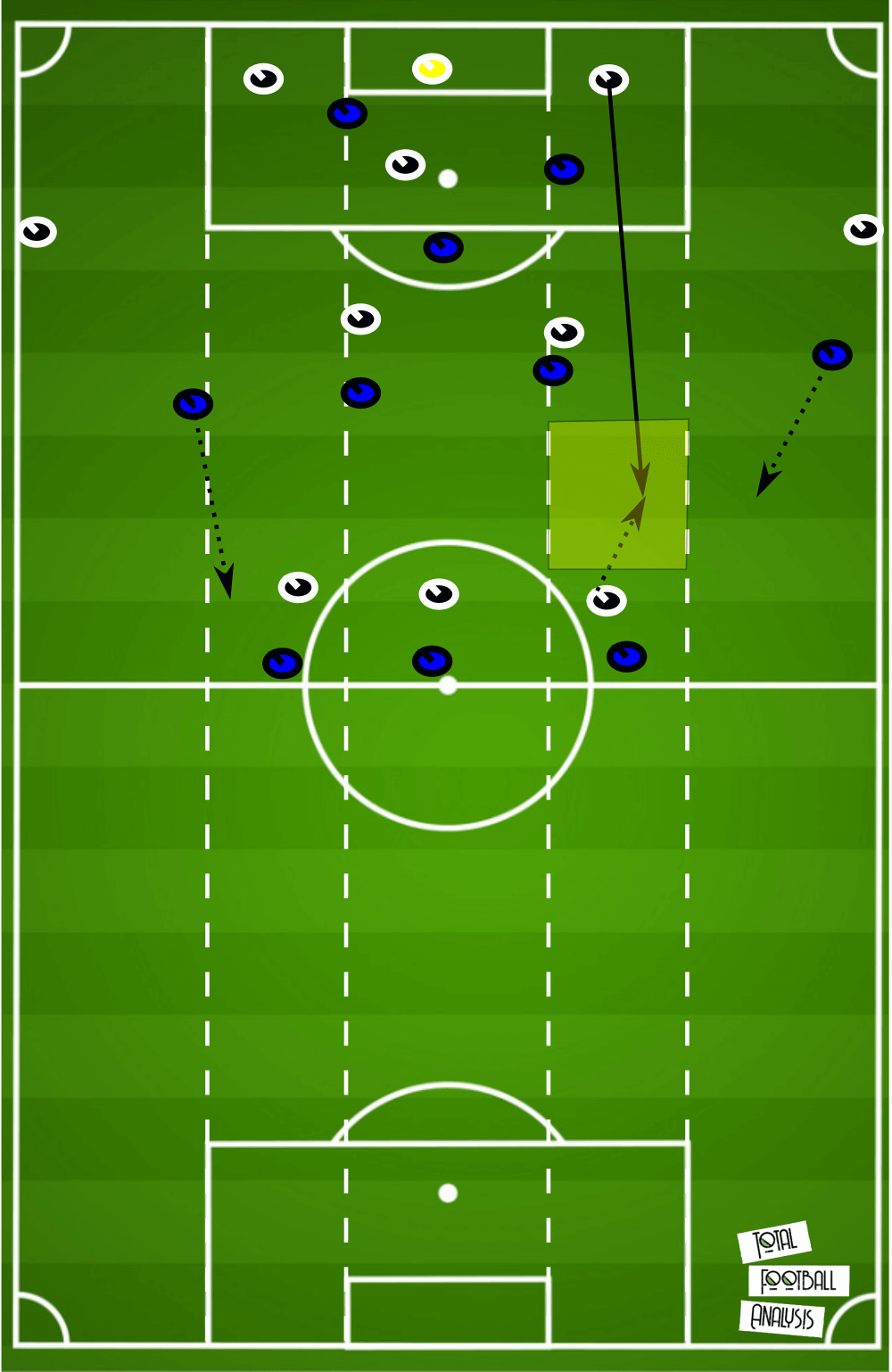 Gladbach’s response to this pressure was to push three men higher up the pitch. Thuram and Alassane Plea were already acting as the strikers, but Jonas Hofmann would also join them in an attempt to create some numerical equality higher up the pitch. By dropping their midfielders and pushing their front line higher up the pitch, Gladbach was able to create space for their forward line to receive aerial passes and move forward from there. Elvedi, Ginter, or Sommer would look to target Thuram if their closer passing options were cut out. Thuram essentially had the half-space to receive the ball; if it was played too wide, Inter’s winger would be able to drop down and pressure him immediately. 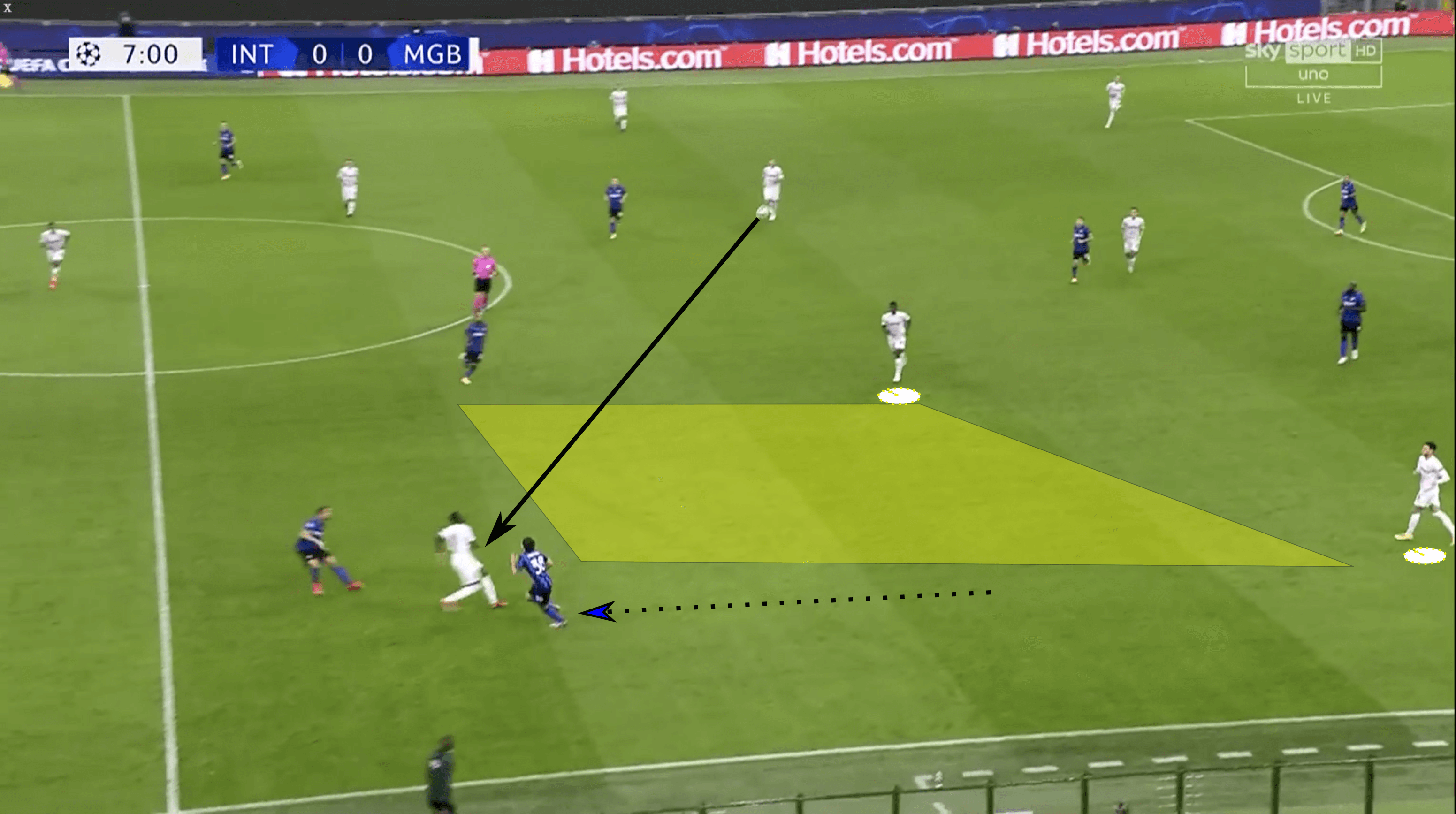 As this ball dropped to Thuram on the wing, he was immediately put under pressure from both D’Ambrosio and Darmian. Despite this pressure, a lot of space had opened up in the centre of the pitch due to Gladbach’s spacing. In this instance, Thuram was actually able to control the ball, but asking him to win these consistently wouldn’t have been a successful choice for Gladbach. 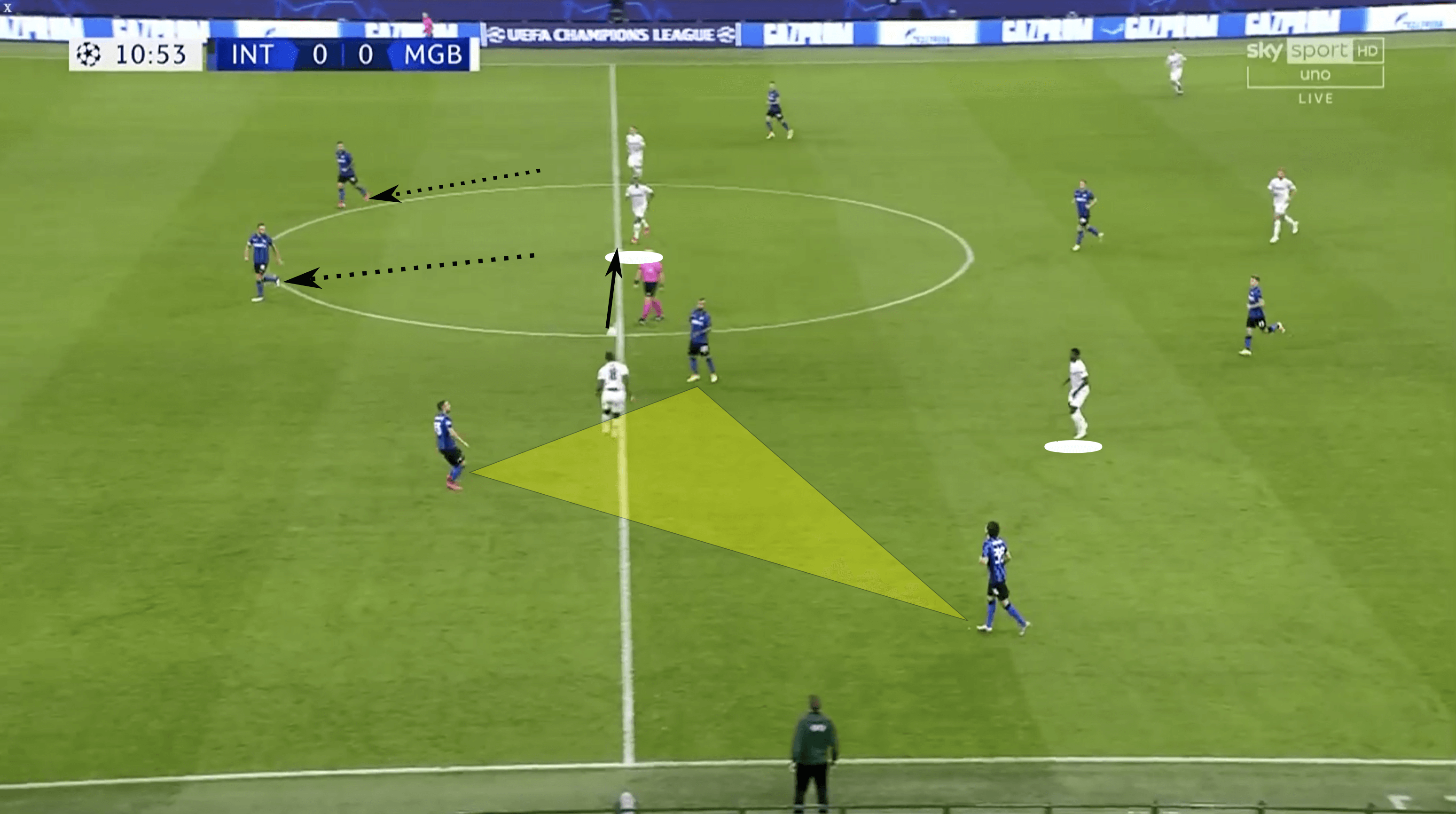 Instead, Thuram spent more time in the half-space. This allowed him to receive those aerial passes without too much pressure. Inter’s back line was forced to drop as the ball came in because they didn’t want to get beat with a flick from Thuram’s head. This opened up room for Plea to become a passing option as he did in this sequence. Notice Breel Embolo’s availability as well; if Thuram can find him as the third man, he’s got a great option to move forward and progress without much initial pressure.

In the second half, Gladbach continued to find Thuram, regardless of which side of the pitch the build up was on. Thuram is listed a 6’4, so it’s no surprise that they looked to use him as a target man to play off of. 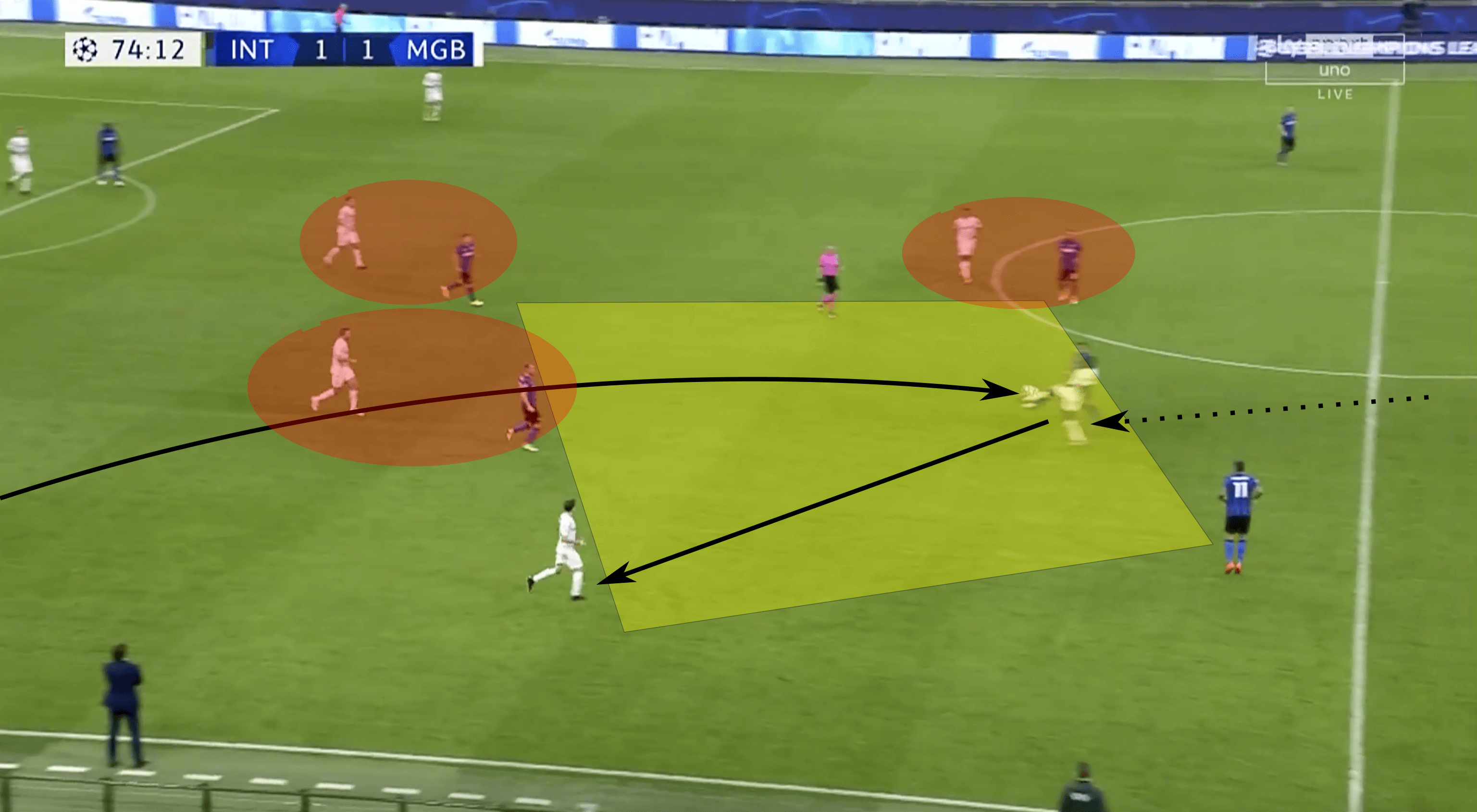 The ‘pinning’ of Inter’s midfielders continued, as both Kramer and Neuhaus dropped lower in order to draw the attention of their opponents. The key positioning here is Plea, who is staying central and attracting the attention of Vidal. Thuram has all the space in the world to run into and receive the ball. His willingness to do so on the move allowed him to create a small bit of separation between himself and the defender, creating enough room for him to use his first touch to lay the ball off to Hofmann, who could then progress forward.

Inter’s backline was incredibly patient on the ball, willing to pass it between themselves and not really look to force play unless an opportunity presented itself. One of those opportunities came when miscommunication between the Gladbach midfield allowed Ericksen to receive the ball and turn up the field. The pressure from Gladbach came, but not before he was allowed to pick out his target. 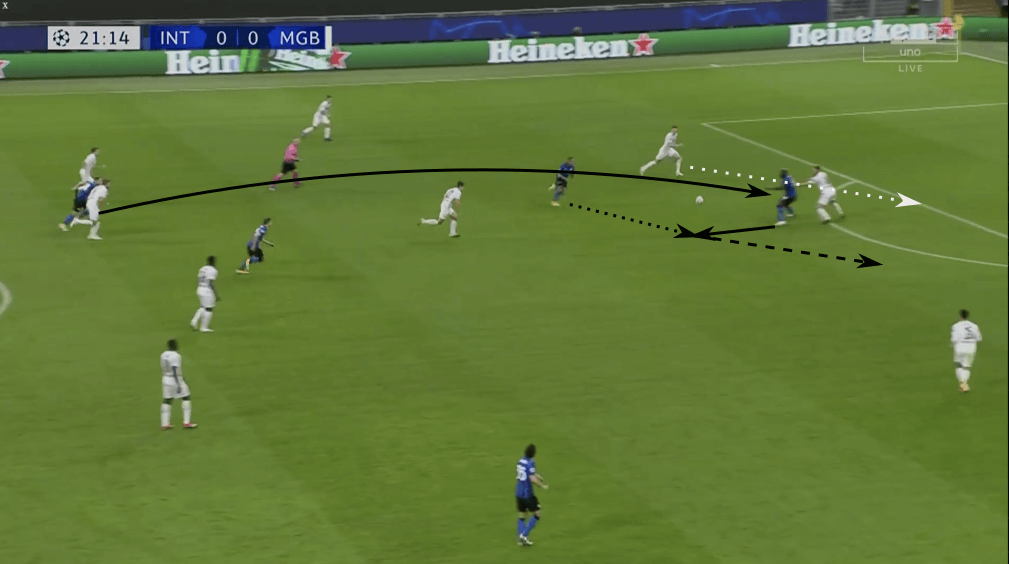 As soon as Ericksen played the ball to Lukaku, Alexis Sanchez began his run. In an attempt to create space, Sanchez made his run in front of Lukaku — a move that his Ginter, who was marking him, couldn’t do without opening up a large amount of space behind Gladbach’s line. Lukaku did well to chest the ball to Sanchez, who had created enough space between himself and Ginter for his first touch. Elvedi did well to release from Lukaku, and Gladbach was able to win the ball back with some pressure from both Elvedi and Bensebaini.

What worked well for Inter’s third-man passing is that they never tried to do it over too large of a distance. This meant that passes could be hit well, but not too hard that they would be tough to control. Lukaku was the main target for these moves, and his ability to take pace off the ball, particularly with his chest, allowed Inter to get forward. 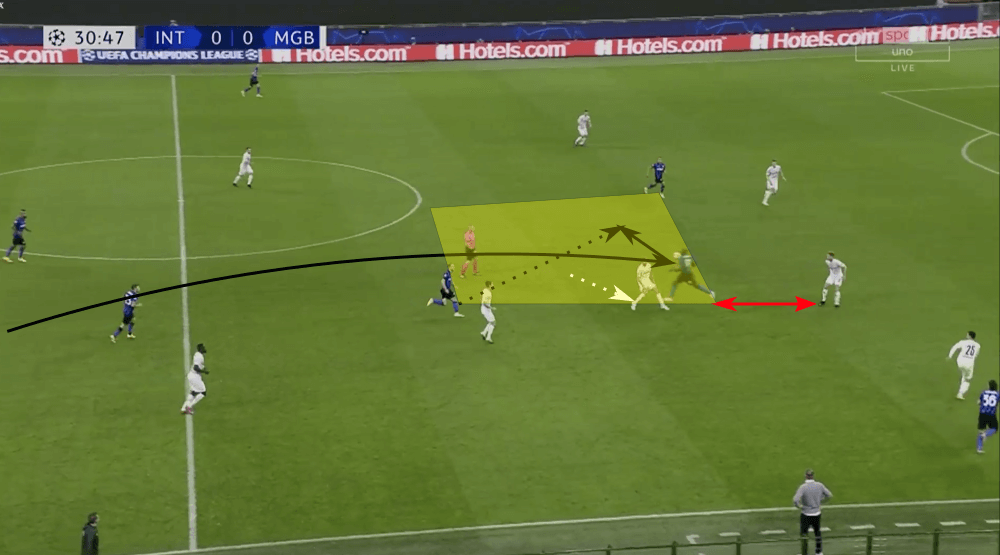 This time the pass to Lukaku came from de Vrij after Lukaku had dropped down into the midfield. Elvedi cannot follow Lukaku into that space without leaving a large amount of space behind him, and so Lukaku is able to drop down without much pressure being applied. The beauty of the third-man pass is that it relies on an off-ball defender’s likelihood to pressure the ball, even when it’s not advantageous to do so. The run by Kramer marked in white is a perfect example. Kramer is already late to the ball; he’s not likely to win an aerial battle against Lukaku; and he’s just vacated space behind himself for Eriksen to run into. In this instance, Eriksen dribbled away from the pressure as Kramer tried to recover. This allowed him to cut back and get the ball on his right foot at the top of the box, resulting in Elvedi having to step up and block the shot. 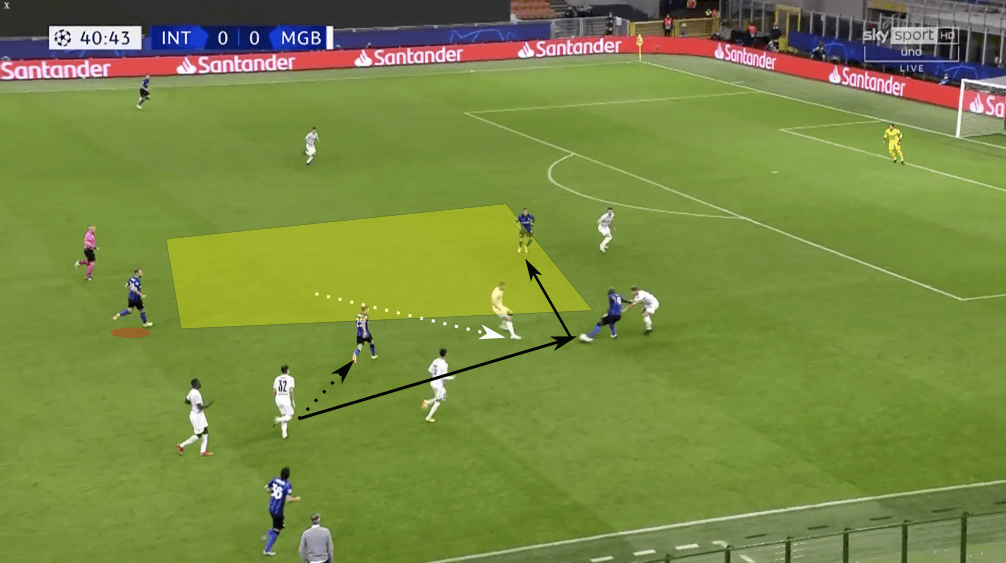 One of the closest opportunities of the first half for Inter came from another pass into Lukaku’s feet, this time coming from Barella. As the ball arrived, Lukaku set up to hold off his defender, allowing the play to develop around him. As he did, Kramer once again arrived to put additional pressure on Lukaku. The problem with this is that it opened up a large amount of space in the centre of the pitch, where multiple Inter players were primed to receive the ball. Lukaku ended up playing a quick give-and-go with Sanchez before firing a shot off that just missed the target, but Inter had plenty of options available. The best bet would have been Eriksen (in red) or Barella charging through that space, as Sanchez and Lukaku had both centre-backs pinned. While Barella made the run, Sanchez had checked back as well, and Barella deferred to the Chilean in this instance.

In the second half, Lautaro Martinez came on for Alexis Sanchez, and his movement caused problems for Gladbach as he looked to push their back line off balance. Martinez was more than willing to drop down into the midfield, which caused problems for Ginter who had to decide how much he had to follow Martinez. If he went too far, a large gap would open up between him and Elvedi; if he didn’t follow him at all, Martinez would be able to receive and turn up the pitch. 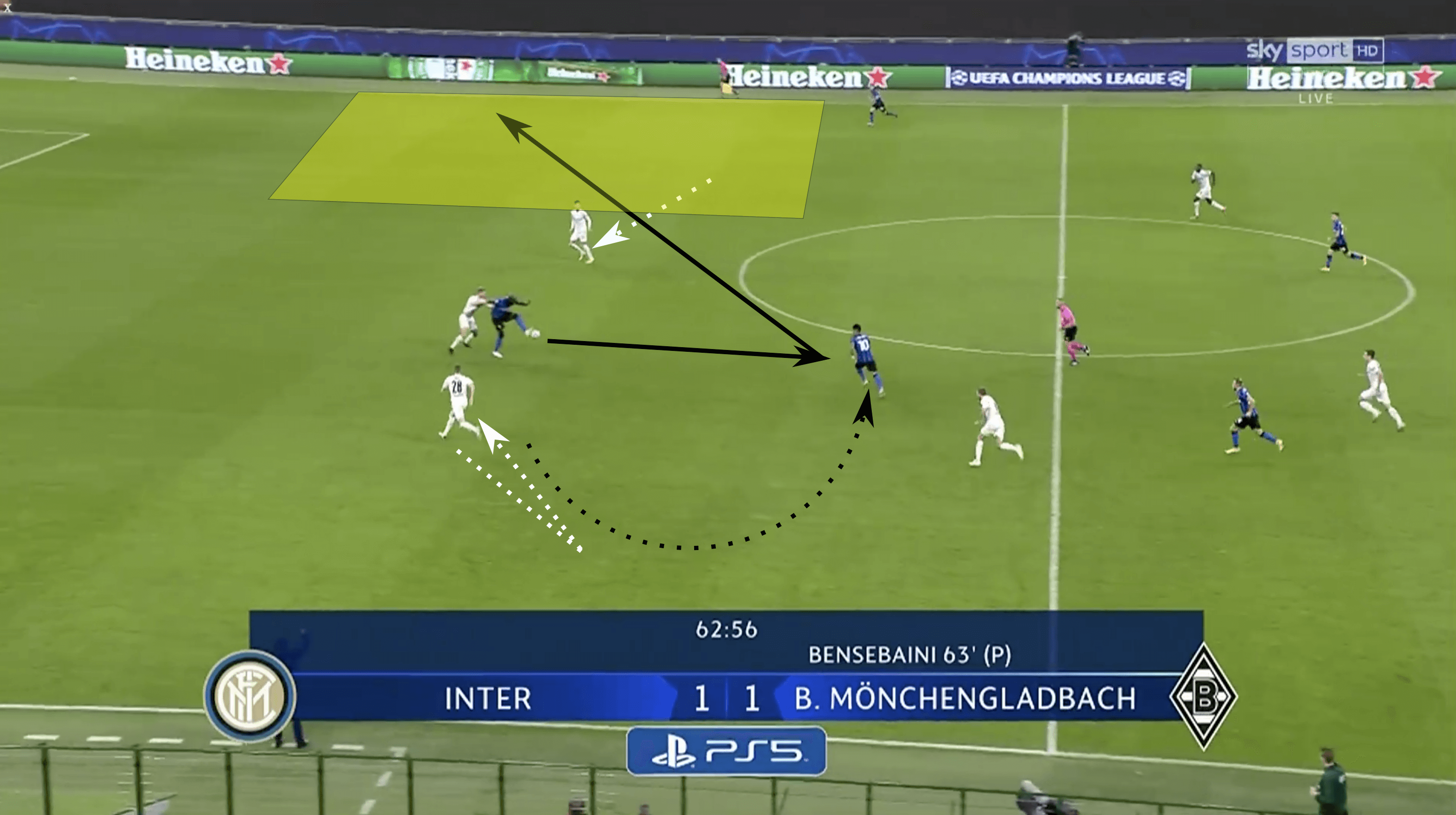 Immediately after scoring, Gladbach looked to press higher up the pitch. Inter, who were more than willing to be patient, moved the ball amongst their back three pretty consistently, looking to find space to progress forward. Ivan Perišić dropped lower on the pitch to receive the ball, and Stefan Lainer followed him to pressure. As Lainer left the space, Martinez dropped into it, followed by Ginter. Recognising his mistake, Ginter dropped as Perišić played the pass into Lukaku. The result of Ginter stepping forward was that Elvedi was left alone on Lukaku, so Bensebaini tucked in centrally to remain compact. This opened up a large amount of space on the right flank for Darmian, who was able to receive the ball with plenty of time. Martinez was open on the back post, but Darmian’s pass was just a little too far in front of him. 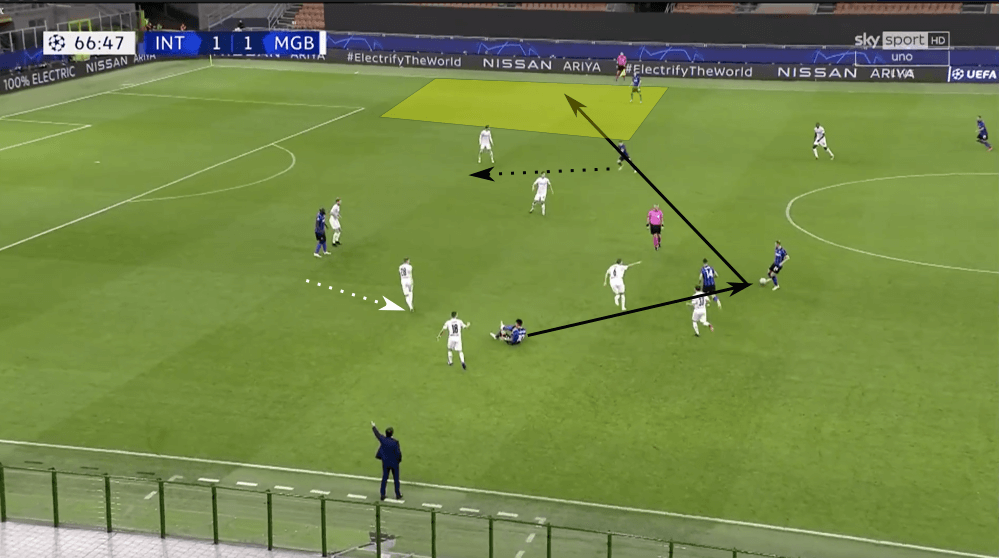 Minutes later, a similar situation occurred with Ginter once again following Martinez, who is the player on the ground in this image. As Ginter retreated to his back line, Bensebaini once again tucked in centrally to remain compact. Barella made a great run into his blind angle, which caused Bensebaini to pass him off to Elvedi. 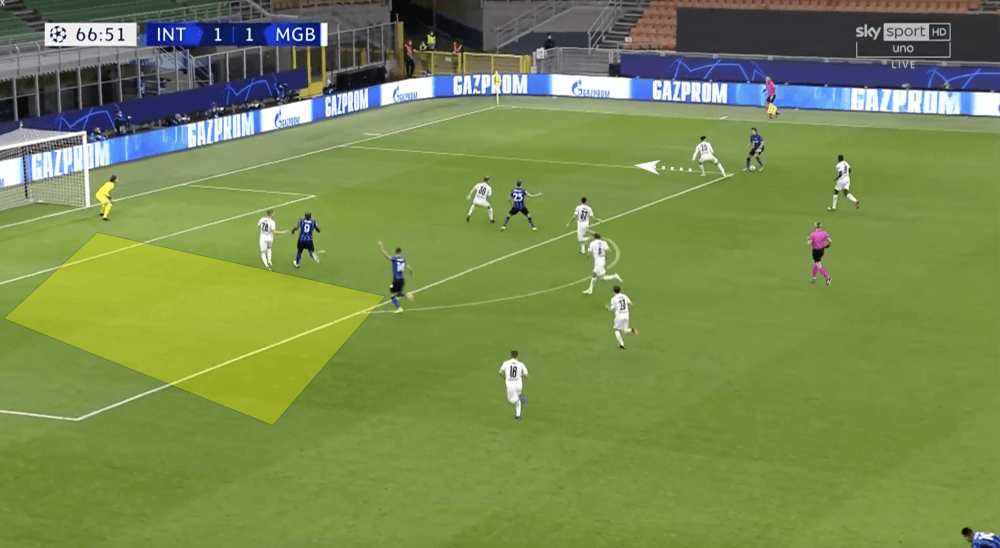 As Elvedi shifted, Ginter recovered his position, this time marking Lukaku. The problem was that Martinez was still open on the back post as Lainer was making his recovery run. Luckily for Gladbach, Bensebaini’s positioning had him going towards his own goal. This meant that if Darmian tried to dribble past him, Bensebaini would have been ready to cut him off. Instead, Darmian played the ball backwards, and the danger on the back post was avoided.

Inter saw a good number of chances in the second half but will have to share the points after conceding two goals in the second half. They’ll take on Shakhtar Donetsk next week as group play continues. Gladbach continues their string of draws, and they’ll look to reverse that trend in the Champions League on Tuesday when they take on Real Madrid at home.