Both Milan and Juventus didn’t have the best start to the 2022/23 season with the teams failing to show consistency and having struggles in certain areas.

The Rossoneri are currently fifth in Serie A and their defensive performance makes their title-defending season more complicated than expected. The team struggled with multiple injuries in the last month, but the bigger problem seems to be their inability to cope with creative attacks – something Stefano Pioli’s side didn’t have a problem with last season.

The uncertainty in the Juventus squad continues with Massimiliano Allegri failing to find the best tactical solutions in their games, which results in a lack of connection between the lines and poor performance during transitions.

The derby between Milan and Juventus in the ninth round comes in a moment of crisis for the two teams, as both managers have a lot to prove and need to demonstrate tactical intelligence to grab the important three points.

Milan’s chances have dropped significantly with a few new injuries on the horizon that sidelined some of their key players. Mike Maignan, Theo Hernández, Davide Calabria and Alexis Saelemaekers are all out for the clash and it is expected that Pioli will have difficulties filling the gaps in each position.

Although things look better for the Bianconeri in terms of squad availability, the way they approach the game will be crucial for a positive outcome. Allegri’s players need to be much more confident and creative in attack while minimizing the defensive mistakes as Milan’s players will not only try to force them into such but also take advantage of them.

In this preview, we use tactical analysis to examine both teams’ performance and explain what the successful tactics in the game might be.

As mentioned, Pioli will be challenged to select the best starting eleven due to the injuries of some of his regular starters. In the absence of Maignan, the manager has no choice but to rely on the 36-year-old Ciprian Tătărușanu to cover the goal. Fodé Ballo-Touré is expected to start in the left full-back position, with Fikayo Tomori and Simon Kjær in central defence.

Both Alessandro Florenzi and Calabria are sidelined, which forces him to play with Sergiño Dest on the right. His performance in the 0-3 loss to Chelsea in the Champions League was definitive as he failed to provide the needed support both defensively and in attack, which might be problematic against Juve’s Filip Kostić as well.

Ismaël Bennacer and Sandro Tonali are expected to start in central midfield. Rafael Leão will be employed on the left of the attack, while on the right, Pioli might decide to rely on Junior Messias due to Rade Krunić’s poor performance against the Blues.

Charles De Ketelaere is expected to play behind the striker. While most probably Olivier Giroud will be the one starting at the top of the attack, the manager also has the recently returned Ante Rebić as a second option up front. The Croatian might be the better option.

Wojciech Szczęsny’s return on the goal is noticeable for Juventus, with the keeper conceding only one goal in their last two games. Allegri will most probably rely on Bremer and Leonardo Bonucci as the central defensive duo. Alex Sandro, who also recently returned from injury, is available and might be the solution to the team’s struggles on the left as his display against Bologna gave the team something to build onto.

On the right, the manager can choose between Danilo and Juan Cuadrado. Danilo is less adventurous in attack, which might be better against Leão who will be a constant threat on the left. However, Cuadrado is more efficient in some his defensive actions compared to his teammate. Allegri should consider which is the better option against the Milan team.

Manuel Locatelli and Adrien Rabiot are most probably going to stroll into midfield, with Weston McKennie and Filip Kostić as the wingers. Arkadiusz Milik is expected to be partnered with Dušan Vlahović up front. Juventus’ biggest struggle will be the absence of Ángel Di María, who saw red against Monza.

The Rossoneri’s injury blast is expected to affect their performance as they need replacements in a few areas where their squad depth is lacking—starting off with the goalkeeping position where Maignan usually provides a lot of solidity and confidence to his teammates. Moving to the absence of Hernández on the left, his injury is a big test for Milan since it has impacted their attacking movement immensely and despite producing many shots in their last few games, they were more limited and reliable on the attackers.

His replacement Ballo-Touré contributed well against Empoli but struggles against Chelsea in CL, where he had to counteract the Blues’ constant attacking movement on the right, which not only limited his movement forward but also tested his decision-making defensively and the result was poor. If Cuadrado starts the game as the right full-back for Juventus, Ballo-Touré might have difficulties stopping his offensive movement and combinations with Milik. The good news for the team is that Hernández has returned to training on Thursday earlier than expected, which means that they might force his recovery for the derby.

However, surprisingly, one of Pioli’s biggest problems for the game is the absence of his first-choice right back. With both Florenzi and Calabria being sidelined, his only option is Dest, who is unlikely to be able to cope with the pressure of Kostić’s and Vlahović’s movement. He should be focusing on his defensive responsibilities, rather than trying to expose the opposition through the flank, since the gaps occurred after his movement forward might be smartly exposed by the opposition.

Can Allegri find the best solution in attack?

Juventus’ attacking numbers have improved compared to last season, but they are not up to standard yet. The team are far from the threatening team they once were and despite all the newcomers in the forward positions, Allegri is failing in building the right attacking approach for the side.

The team have the chance to prove themselves against Milan, considering their shortage of players. They need to focus on the weaker areas but most importantly stay on the front foot even if they gain an advantage. That can be crucial in their efforts to penetrate.

The most logical strategy for the Bianconeri will be to focus their attacking actions on the left and be less adventurous on the right. Not only they can put pressure on Dest, but their whole build-up could succeed through these areas, as the aftermath of Saelemaekers’ injury is a lower defensive coverage. He usually supports the team with many recoveries in the advanced areas and involves in all defensive actions, and his absence is the perfect chance for Juventus to break through those first lines of defence and progress the ball so they can rely on the attacking players’ individual skill to threaten the goal.

If Pioli wants to have better coverage on the right, it might be a better idea to employ Pierre Kalulu as an RB, as this is a position he has played in on multiple occasions both for club and country and has shown maturity both in and out of possession.

What should the Rossoneri focus on up front?

As Leão is Milan’s big star in attack, it is expected that Juventus will put all of their defensive efforts into limiting his movement. While his technical skills and speed are difficult to defend against, Pioli needs to have a plan B in case they manage to stop the Portuguese. Chelsea’s Reece James did a great job at challenging the attacker and his team got awarded for that.

While Giroud can always sneak behind and expose the defence, the player that can really bring the surprise is De Ketelaere. His movement in and around the box becomes crucial for the team and he can take advantage of Leão engaging the Juve players on the left and make runs to the box to threaten the goal.

Even if the Portuguese’s movement to the goal is limited, his technical abilities and dribbling should still allow him to provide quality balls for his teammates. De Ketelaere can successfully hold on to the ball and move to goalscoring positions, so his connection with Giroud should be on point so they can do positional interchanges and catch the defence off-guard.

As our analysis shows, both teams currently have problems they have to deal with but the injuries might play a crucial part in the outcome of the game. While it was Juventus who struggled with the absence of some players since the start of the season, now they start to gain back confidence аnd the pressure is on their opponents. Allegri’s in-game tactical decisions and changes will be decisive, while Pioli’s key men will need to step up and try to compensate for the weaknesses they have. 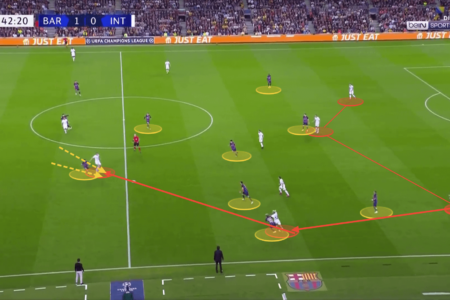 A dramatic game at Camp Nou against Inter, which ended in a 3-3 draw, gave Barcelona some last hope that […]