Lazio vs Inter preview: How can Inzaghi control his ex-players’ movement to defend against the Sarriball – tactical analysis

The fight for the Serie A title continues this week with the fixture between Lazio and Inter. Simone Inzaghi will go out against his former club in a highly anticipated tactical battle with the ex-Juventus manager Maurizio Sarri, who took charge of Lazio in the summer and is still trying to establish his playing style and adjust the players to it.

Inzaghi, on the other side, has been quite successful since the start of the season and keeps the 2020/21 champions in the loop, currently sitting 3rd in the table with 17 points and without a defeat in seven games.

Despite the departure of their best performers Romelu Lukaku and Achraf Hakimi, the Nerazzurri showed consistency and drive under their new manager and are motivated to defend their title. Not only they didn’t miss the two players as much as expected, but also their new additions Edin Džeko and Hakan Çalhanoğlu fit the team well and are turning into crucial figures for the team.

Sarri returned to Serie A with a couple of wins but his team then started experiencing some difficulties which started with their 0:2 defeat to Milan. Despite that the Biancocelesti won Derby della Capitale against Roma, the team weren’t convincing defensively and they currently sit in the bottom half of the table in terms of goals conceded.

In this preview in the form of tactical analysis, we examine how both managers could outwit each other and how they could tweak their tactics to get the 3 points.

How can Inter limit the opposition’s attacking movement?

While there are rather solid at the back, the team’s more aggressive man-to-man marking makes them more vulnerable whenever the opposition escape that press as the players need more time and effort to regroup and defend as a unit. This often happens when defending against long balls behind the defence, as the team have difficulties in covering depth for the defender that goes out of position to cover the ball receiver. Although their back-three would try to not go too high and stay prepared for a turnover, they sometimes struggle in dropping back as a unit.

This often forces them to rely on individual performance and makes them more prone to individual errors. This often results in committing fouls in dangerous areas and giving away free kicks which gives their opponents opportunities on the goal.

Lazio will try to expose them through short passing and creative combinations, which might be difficult for Inter to defend against. Not only they will need to stay compact and move deeper but also limit the spaces between the lines and try to force Lazio out wide, where they are more unlikely to successfully create opportunities.

Sarri’s side don’t rely on many crossing attempts and forcing them to play through the wide areas might give them some struggles and test their creativity. Inter though, have to be careful as in their efforts to block the passing lines centrally, Lazio might not opt for playing with width but might switch to a direct play and try to deliver long balls directly to the advanced areas. This could trigger chaotic movement by the Nerazzurri and force them into mistakes. Inter are among the teams that commit the highest number of fouls per 90 (13.01).

How can Inter’s defensive efforts turn into an attacking advantage?

While it might seem that Inter would get pinned back with the abovementioned strategy, the team could easily turn their deeper positioning into an attacking advantage. Similarly to last season, the Nerazzurri are extremely dangerous on a counter, which could be the perfect strategy against Lazio.

Sarri’s side always look to have the possession and attack constantly, which results in more advanced positioning and a highly positioned defensive line. Inzaghi could use that very smartly and instruct his players to give away the initiative and let the opposition think that they control the game. This way, they will be able to focus on recovering the ball in their defensive third and combine being solid defensively with exposing Lazio through counter-attacking actions. 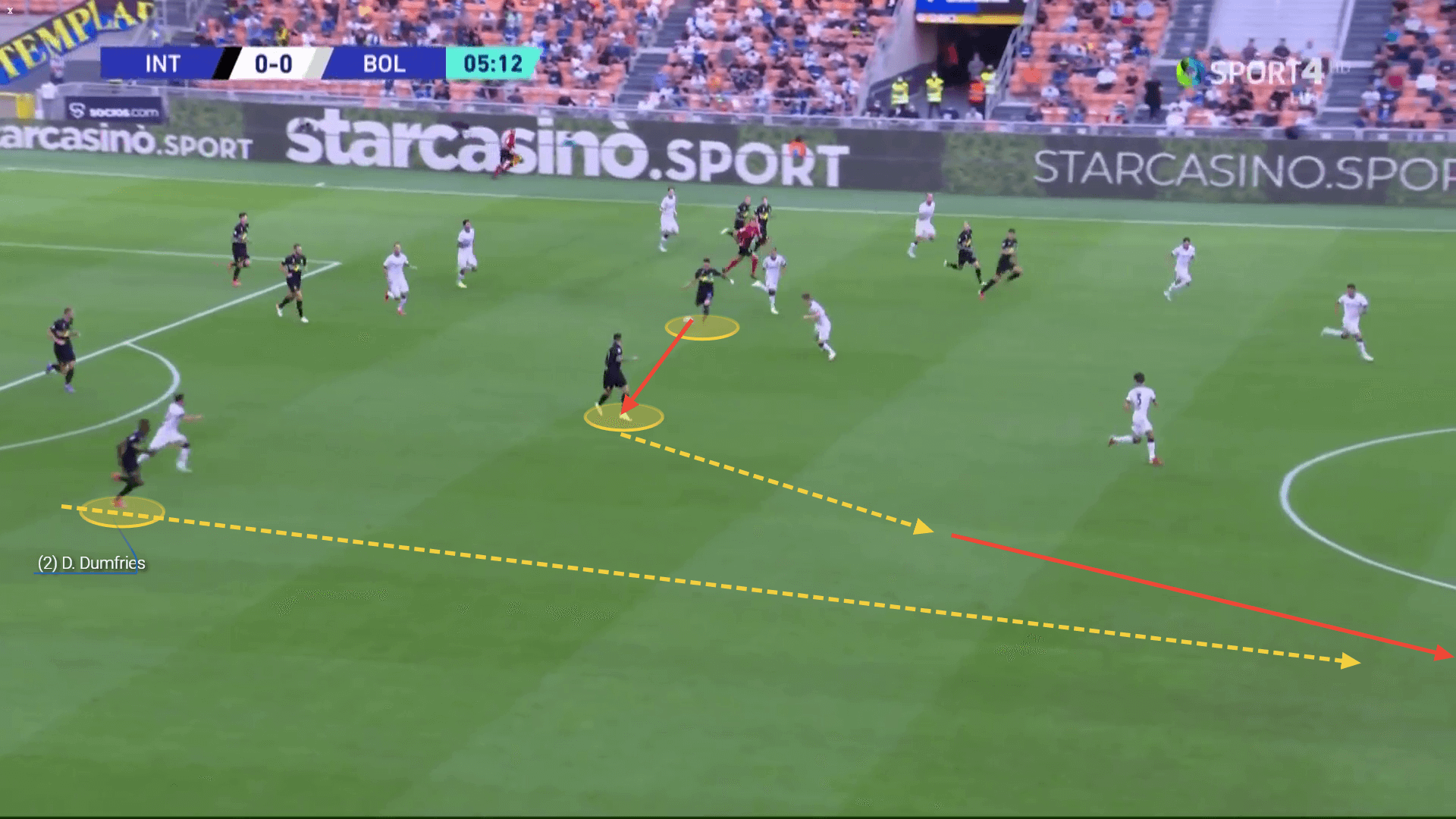 Inter recovered the ball in their own third and immediately started a counter-attack. Dumfries’ run off the ball was crucial for the successful outcome.With experienced players as Brozović and Çalhanoğlu who can distribute the ball further and a versatile attacking duo, Inter could successfully break through Lazio’s defensive unit and create chances. Their tendency to switch play increases their chances as even if the opposition try to counteract, they could easily change the direction of play and exploit the underloaded areas. Francesco Acerbi’s absence, after seeing red against Bologna will additionally increase Lazio’s defensive vulnerability.

If Lazio want to avoid this, their backline needs to increase their awareness and not involve in the actions in the opposition’s half too much. While they can support the team by providing balls from the back, staying closer to the central line would give them more time to react in cases of turnover.

How can Lazio penetrate?

While the Biancocelesti are also strong on a counter, there might be a more sufficient way to expose their opponents, especially if they invite the play in their own half.

Limiting Brozović’s movement and covering him tightly might make Inter’s life miserable both defensively and in attack. He is always the first one to join the defensive line during defensive transitions and is very helpful in closing out space. If the Lazio players manage to block his movement, the Nerazzurri might struggle to cover depth which will result in leaving gaps in dangerous areas.

The midfield’s importance in Inter’s defensive actions is huge, so Lazio might successfully penetrate if they manage to disconnect the backline and the midfield with a lot of movement between the lines. Lazio could also use this strategy defensively, as blocking Brozovic’s movement in possession might result in a poor connection between the lines and difficulties in building up from the back.

Another option for Sarri’s side in attack is relying on long shot opportunities. And this is likely to happen, especially if Inter do stay deep in their own half. The players tend to create long shot opportunities and surprise their opponents. Inter, on the other side, have had difficulties in defending shots from outside the box, which means that they need to be aware that their pressing efforts and defensive actions might force Lazio into shooting from distance, which might result in conceding.

As our analysis showed, both teams could expose each other in multiple ways and it will be a game of nerves and concentration as both they need to be constantly aware of the opposition’s movement and anticipate each other’s actions. Sarri is capable of ending Inter’s unbeaten run, but Inzaghi’s vision shouldn’t be underestimated, especially because he knows what are Lazio’s strengths and which are the players that could cause them struggles.