Milan Women hosted Fiorentina Women in the new season’s first Serie A Women game. It was also the first game as professionals for both teams since Serie A Women has just become professional starting from this actual season.

This was a match to forget for AC Milan as they were hoping for a convincing start ahead of their endless competition with teams like Juventus, Roma, Inter, Sassuolo and Fiorentina themselves all vying for the top two spots. The Rossonere lost the match 1-3 and showed that they still lack a lot of things in order to compete seriously for the title. Furthermore, continuing at the same level and repeating the same tactical mistakes can easily exclude Milan from the competition for the second spot, knowing that all the other competing teams for this spot have reinforced their squads and are looking in better shape at the moment.

It is true that Milan made some solid reinforcements as well such as the transfer of Kosovare Asllani, but that is not really enough to form a strong team. Changing the team’s key players every season cannot really help the side progress and be more cohesive in terms of ideas and chemistry. The instability in this regard affects how the team plays and looks on the pitch a lot. For instance, replacing Laia Codina and Laura Agard who were two of the team’s best defenders can only harm the team and make them take a step backwards even if the newcomers are stronger and more skilful.

The integration of these new players and their understanding of the team’s defending system and tactics would surely take time at the expense of the team’s results in Serie A, and that can make the difference in the standings at the end of the season in the favour of the teams competing with Milan.

Moreover, playing two or three friendly games cannot really prepare the new players 100% especially when knowing that some of them have just joined the squad and did not train much with the team.

On the other side, Fiorentina looked very attentive and determined to win in this match and showed more passion than Milan’s players and that was clear in their way of defending and in the way they exploited the created opportunities and the errors of Milan. They were able to score three goals in a difficult away match and that would surely add a lot of confidence and motivation to the players and help the coaching staff work in a calm and optimistic atmosphere for the coming weeks, which is extremely important on a psychological aspect as it can unexpectedly lead to great results.

In this tactical analysis article, we will be exploring how Fiorentina exploited the chances they created in a perfect way and why Milan conceded numerous goals, before moving to address Milan’s attacking performance and what it lacked to harm Fiorentina.

On the other side, head coach Patrizia Panico preferred to opt for the 4-2-3-1 formation as it suits the players’ abilities better especially the attacking ones. Katja Schroffenegger was the goalkeeper, Kaja Eržen, Alice Tortelli, Laura Agard and Jazmin Nichole Jackmon in defence, Alice Parisi and Sarah Huchet as central midfielders, Milica Mijatović and Michela Catena on the wings, Veró Boquete as an advanced playmaker and Zsanett Kaján as the team’s striker. 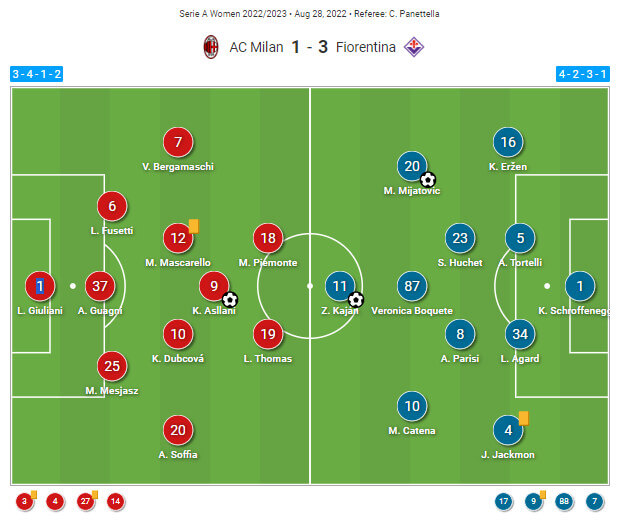 Fiorentina were 100% focused on the game since its first minute while Milan were partly absent during the first-half of the match and when they woke up tactically in the second-half it was too late for them because the damage was already done and it was complicated to score back three goals to an organised Fiorentina. The latter were very attentive to details and made sure to exploit every defensive mistake Milan committed.

In the following first goal action, Milan made an error that happened numerous times during last season and it continues to take place at the start of this season which concerns the defensive trio and their attacking movements. By advancing to help in attack, one of the three centre-backs usually leaves a lot of space behind them and no one can cover for them in this case. That’s why teams with quick attacking players can usually put Milan in trouble as they know exactly how to exploit such occasions.

Fiorentina did so very well too as Kaján received the ball on the left wing, and was about to cut inside when she saw Bergamaschi advanced and Mijatović running behind her to exploit the space shown in a red circle. This could have been prevented if the defensive trio wasn’t leaning towards the right and if Małgorzata Mesjasz did not advance. The inability to remain at the back and the constant usage of the high defensive block put Milan in trouble on most occasions and obliges wingers like Bergamaschi and Soffia to retreat and cover for the centre-backs.

But that was not enough on this occasion as Kaján was intelligent and reactive enough to provide a through pass towards the shown direction at the right timing and before it becomes too late for her teammate because Bergamaschi was trying to save the situation. Moreover, Mijatović’s goal deserves a lot of credit because had the necessary body coordination to shoot with accuracy using her weaker foot after getting rid of Bergamaschi by pretending to shoot with the right foot. Also, she dribbled past Fusetti as well to clear the trajectory of her shot, before putting the ball inside the net despite the attempts to deflect it. 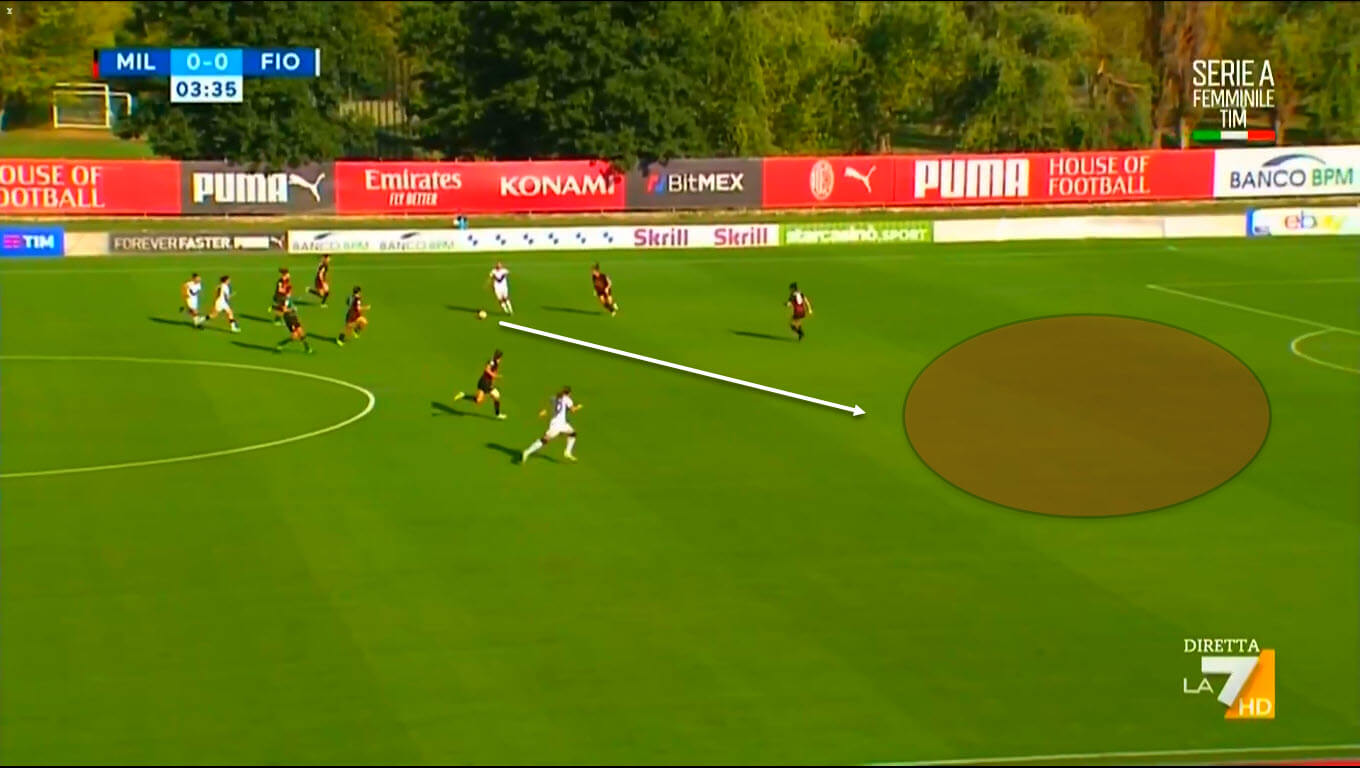 What counts for Fiorentina is that they didn’t retreat to defend their lead following the first goal but they continued attacking and pressing high on Milan’s defence and this was facilitated by Milan’s defensive confusion and their recurrent mistakes.

Moreover, the Rossonere were not able to have a lot of possession as they looked unable to create attacking actions. This ultimately led to Fiorentina scoring the second goal following some high pressing that led to a clearing mistake from Guagni which luckily for Fiorentina awarded the ball to Kaján who scored the goal without much difficulty following a failed back-heel attempt. 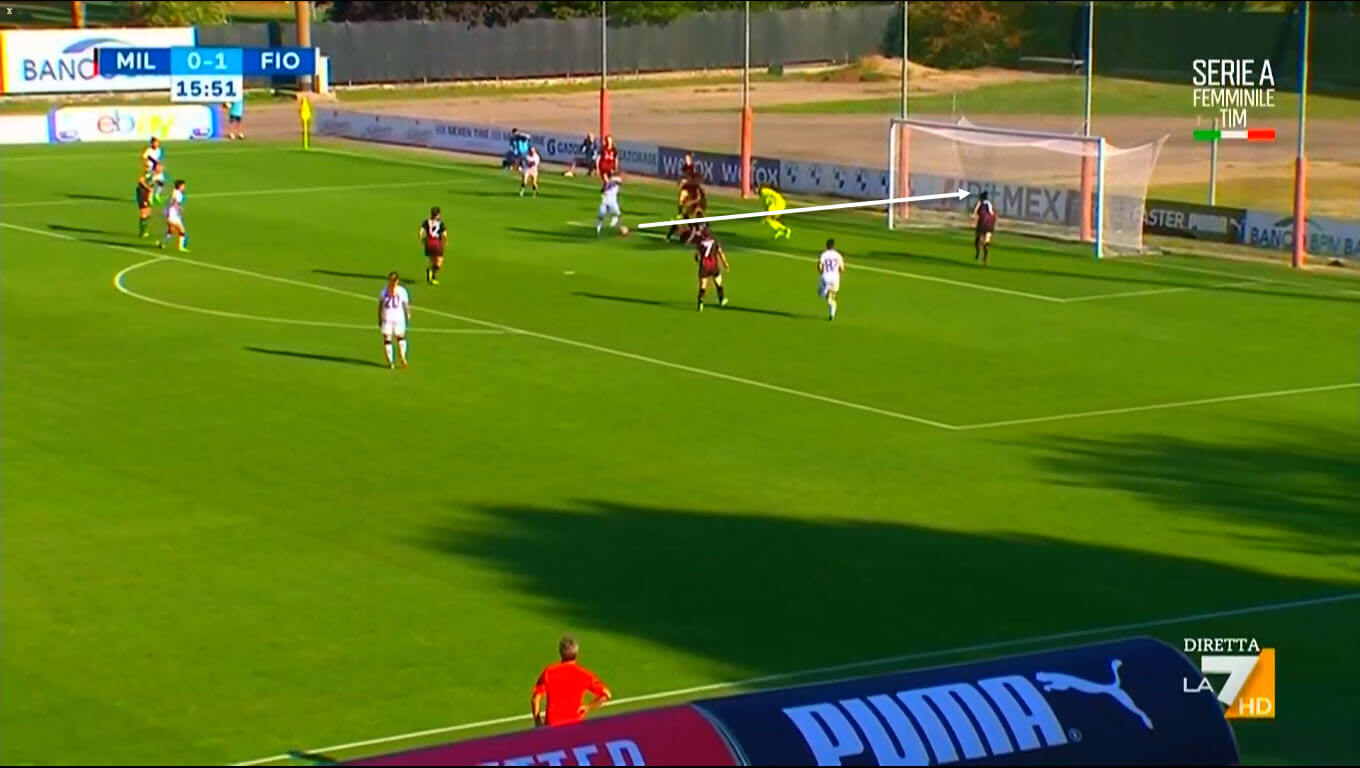 Mesjasz lacked concentration during the first half and was a big contributor to the third Fiorentina goal as she offered an opportunity for Kaján to intercept a wrong backward pass to Giugliani. Mesjasz looked overconfident in this situation but her pass wasn’t as accurate as needed. And more importantly, she didn’t notice that Kaján was ready to intervene at any second if the pass wasn’t going to be very accurate.

In fact, as the picture shows, Kaján has already started running and was planning to disturb the goalkeeper when Mesjasz was about to pass the ball, but she was given a gift from Mesjasz that made her mission easier. Focus and experience could have avoided such a mistake from Milan’s defence but at the same time, Kaján’s determination and effort deserve the praise and the timing of her acceleration to intercept the pass was perfect. Her decision-making was also on point as she didn’t hesitate to dribble past Giugliani despite not having a lot of time to think about her next step when she got the ball. 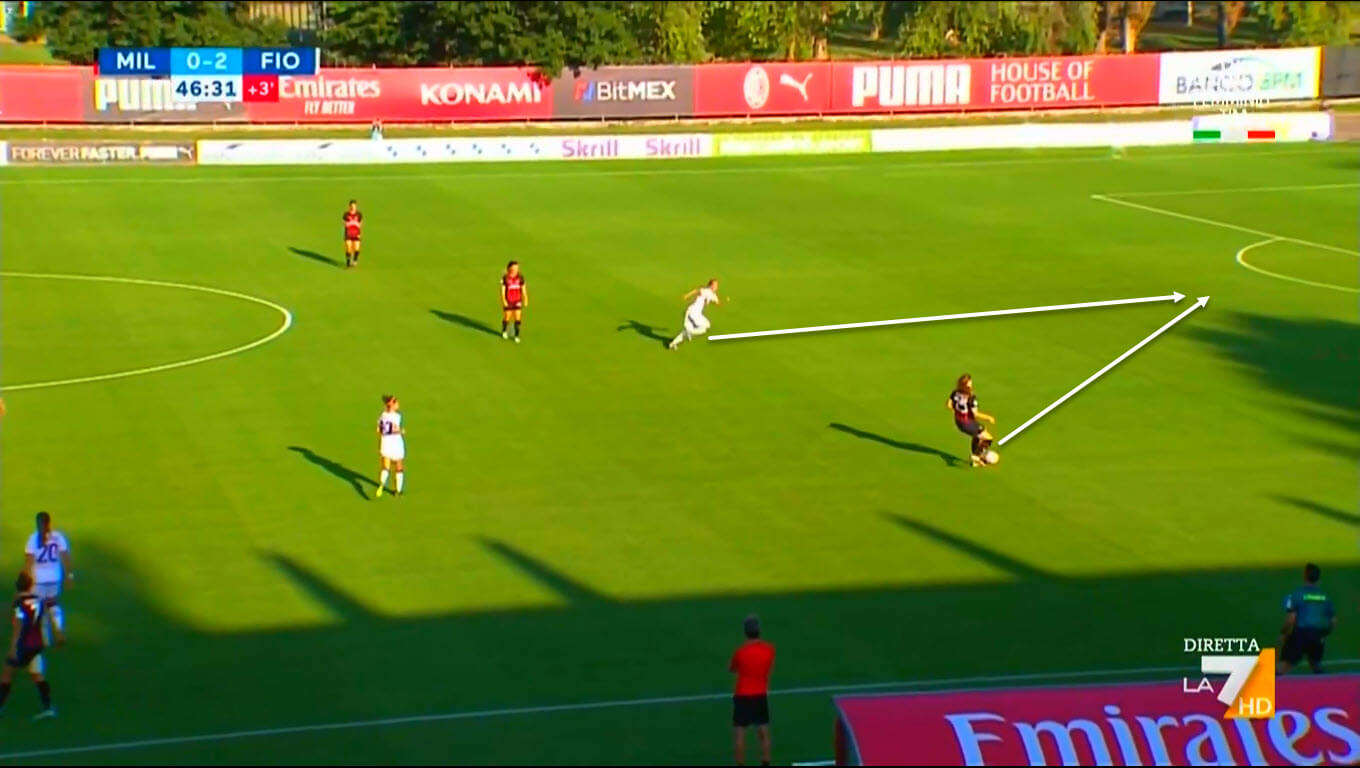 We can’t really talk about Milan’s attacking performance during the first half because the team wasn’t able to reach Fiorentina’s goal as they failed to circulate the ball inside the final third. Milan should learn the lesson by not repeating such a passive attacking performance in the upcoming games to not be obliged to strive for a draw throughout the match.

Starting the match with attacking determination and clear ideas can only benefit this team psychologically and make their opponents struggle to resist because the individual talent is existent. What lacks is the collective team play and clear attacking systems/plans.

We saw Milan advance and threaten Fiorentina during the second-half and with the subbing of fresh wingers like Thrige and Tucceri, the team looked better and was more dangerous. Milan succeeded in scoring their first goal of the new season thanks to Asllani’s interception of the ball from Agard, before advancing and doing a one two passing combination with Piemonte and putting the ball inside the net with great skills and cold blood. And that’s exactly what a brilliant forward can bring to Milan. 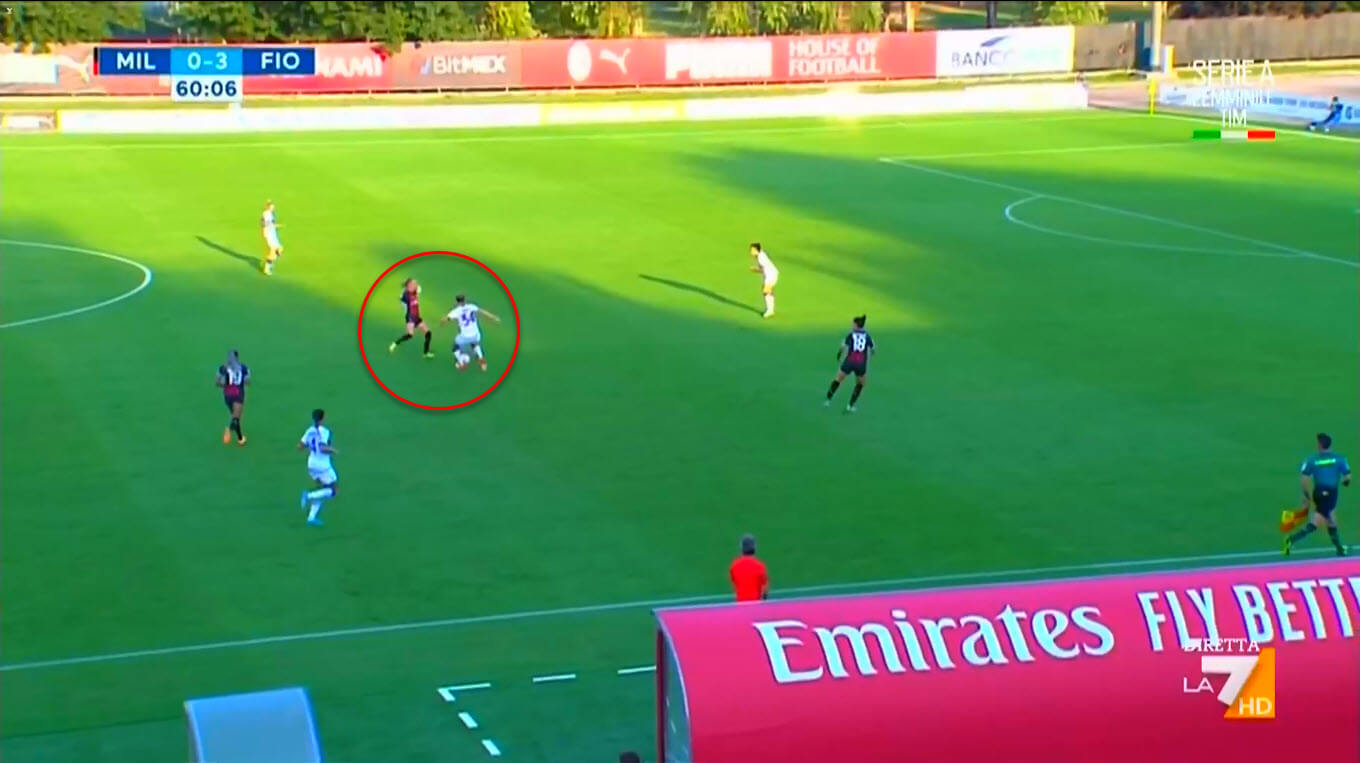 Following this goal, Milan had more possession of the ball and Fiorentina retreated to protect their lead and did so with great organisation, preventing Milan from finding themselves in goalscoring situations. All that Milan were able to take is shots from distance that didn’t really bother Schroffenegger a lot. Moreover, Milan relied on corner-kicks and on early crosses from Thrige and Tucceri to create the danger but that didn’t work well for them in this match.

Fiorentina Women started the new Serie A Women season in the best of ways and the players should keep playing with the same level of motivation and organisation in order to keep winning and achieve greater results than last season.

On the other side, Milan Women have to make numerous revisions and address the mistakes committed both from a defensive and an attacking perspective. It is necessary to improve the team’s attacking ideas and create some alternative plans in this regard in order to become more dangerous and less predictable especially when knowing that the team will be going through a series of difficult games very soon. These matches can be crucial for the competing teams and that’s why Milan will have to be 100% prepared.