Manchester City Women faced Real Madrid Women in the UEFA Women’s Champions League first round and exactly in the “League Path” final as they both won their first games against Tomiris Turan and Sturm.

Real Madrid Women were able to create the surprise once again this season after they succeeded in knocking out Manchester City from the competition last year in a similar way. But this time, things finished in a single match for them and it was a shocking exit for the Citizens.

The team will have to reflect on their performances and see why they failed twice in reaching the UWCL group stage despite being one of the top FAWSL teams at the moment. At the same time, this win will give much confidence to Real Madrid ahead of their journey both in the Spanish league and in the UWCL itself. Winning against a big team like Manchester City is always can always have a boosting impact and it will contribute to making the team much more solid in the upcoming games.

Before beginning the analysis, let’s take a look at both formations. Manchester City started the match according to the 4-3-3 formation with Ellie Roebuck as a goalkeeper, Esme Morgan, Laia Aleixandri, Alex Greenwood and Leila Ouahabi in defence, Keira Walsh, former Barcelona’s Vicky Losada and Mary Fowler in midfield, Lauren Hemp as a left winger, Chloe Kelly on the right wing and Khadija Shaw as a striker.

On the other side, Real Madrid were lined-up according to the 4-4-1-1 formation with Misa Rodríguez in goal,      Kenti Robles, Kathellen Sousa, Ivana Andrés and Olga Carmona in defence, Sandie Toletti and Claudia Zornoza as defensive midfielders, Naomie Feller and Athenea del Castillo on the wings, former Manchester City’s Caroline Weir as an advanced playmaker and Esther González as the team’s striker. 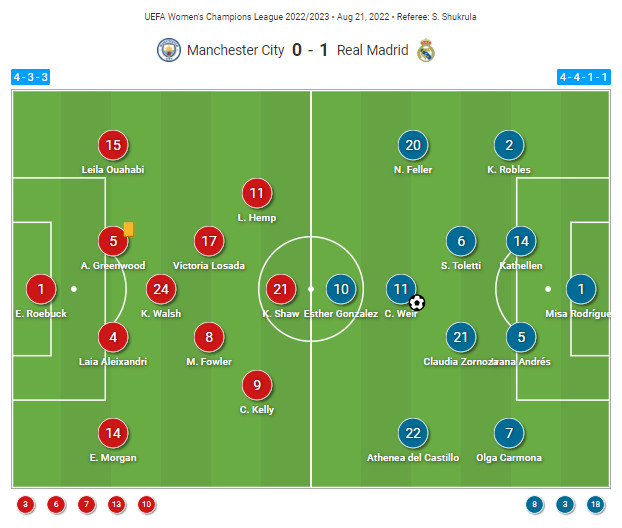 Real Madrid did not start this game playing defensive football or leaving the space for Manchester City to attack. On the contrary, they made sure to start disturbing their opponent since the start and keep creating attacking situations for themselves in order to score. Their left wing was extremely dynamic during the game and the signals came from the 7th minute of the match when Carmona received a backward pass and immediately decided to shoot the ball from distance towards the left corner, surprising everyone including the goalkeeper who saved the shot with a lot of difficulty because it was a powerful and a curled shot at the same time. 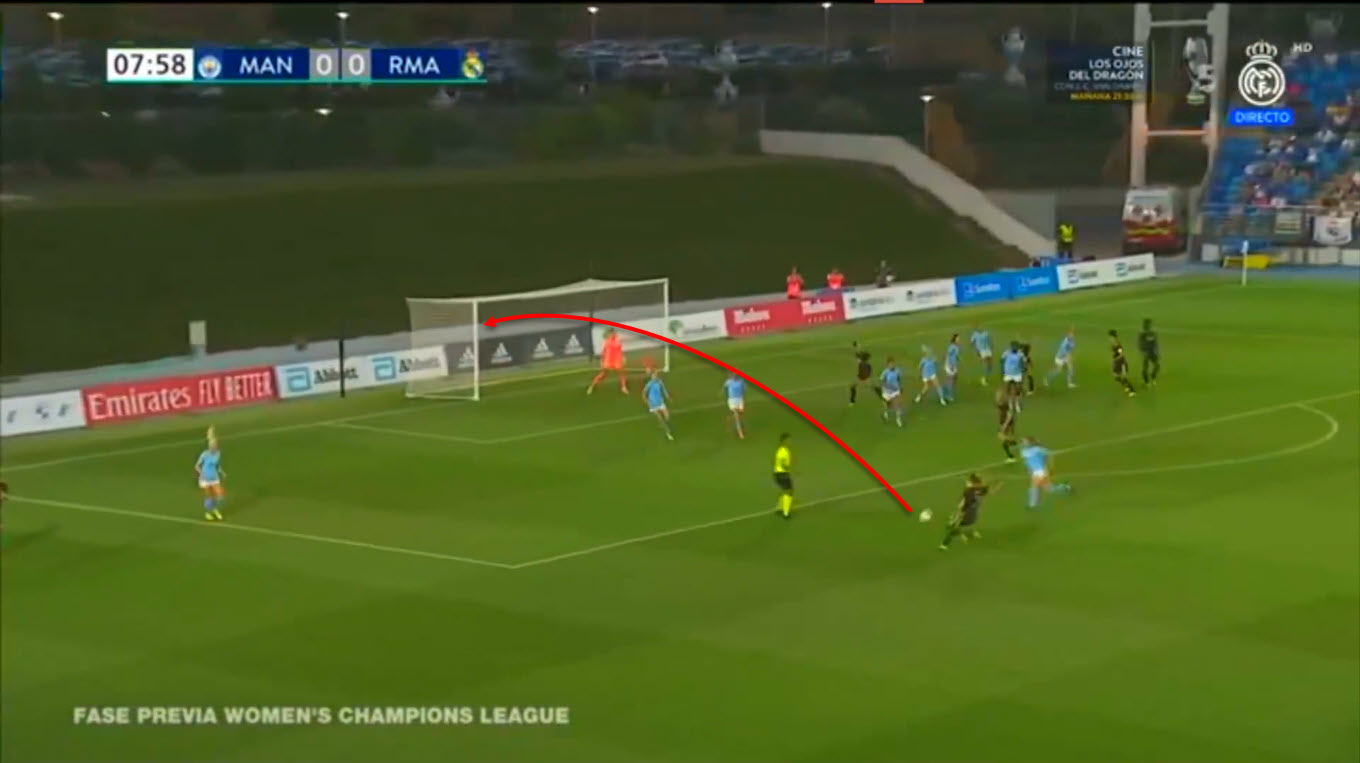 In fact, Real Madrid’s single goal of the match didn’t last long as it was scored at the 14th minute thanks to a great attacking effort from Weir who received a cross from González while she was marked. Weir was able to cover the ball with her body while her back was towards the goal. She succeeded in turning without losing the ball and when she intended to shoot, she found two other opponents in front of her so she confused them with a fake shot in order to leave some space for herself and shoot towards the aimed angle. In the end, Weir scored a very beautiful goal as she emptied the trajectory for herself and put the ball exactly in the far post angle with power and precision. 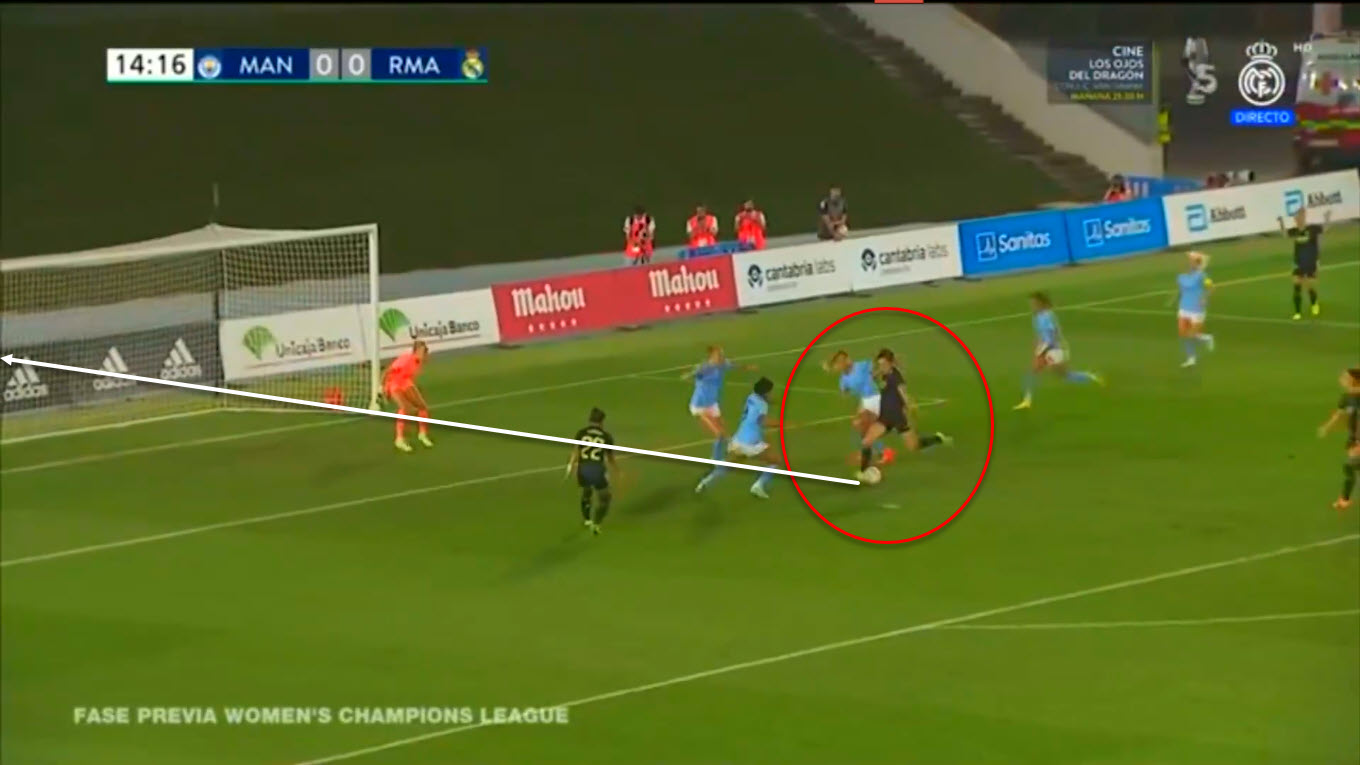 Following this goal, Manchester City did not really make a tangible reaction as they failed to reach Real Madrid’s goal or threaten it. Real Madrid relied therefore on counter-attacks while letting Manchester City have passive possession most of the time. Moreover, set-piece organisation was key for Real Madrid in this match and it was clear that the team worked a lot on these set-pieces and in an efficient way. For instance, corner-kicks were played according to same way at least twice in this match and on both occasions these corners created danger. Short passing to Carmona was in both cases the start of the action, and the first time, Carmona decided to shoot from distance. But the second time, she crossed the ball towards the far post, her teammate provided a passing header to Kathellen who was running from behind towards the goal and who failed to convert an easy goalscoring opportunity into a goal by missing her chance and directing the ball towards the crossbar. Yet, these two chances proved how dangerous Real Madrid can be at set-pieces. 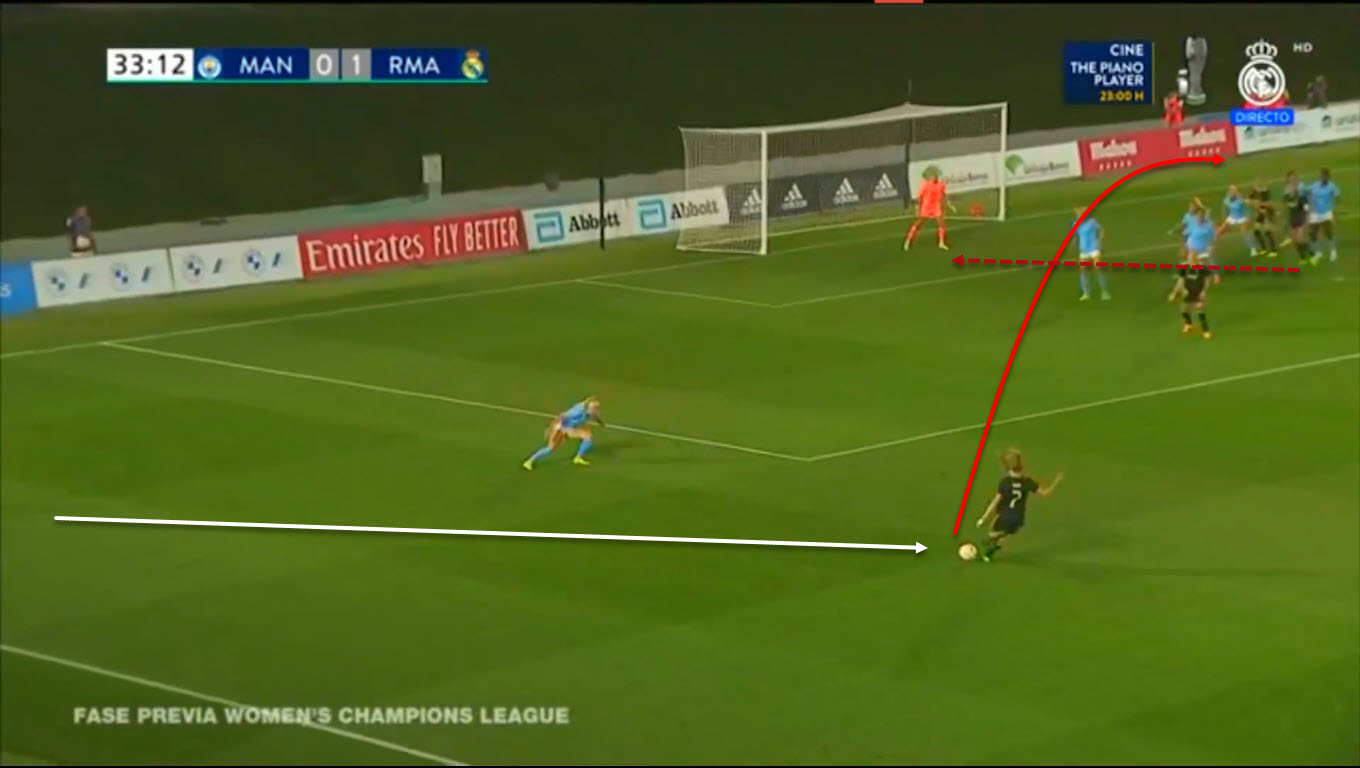 Real Madrid strived to score a second goal but weren’t successful in doing so partly due to missing chances like the previous one and also because Manchester City defended better during the second half and conceded less space. Real Madrid however conceded some more chances during the second half and risked conceding an equalising goal on more than one occasion. They should work more on finishing in the future in order to not remain at risk during the whole match and avoid such confusion. Nevertheless, chance creation was excellent in this match for Real Madrid.

Manchester City failed to start the match in the best of ways as they conceded a goal early in the game and therefore they were not able to play their best football nor threaten Real Madrid a lot, especially during the first half. Yet, they started creating chances in the second half and Khadija Shaw was close to scoring the equalising goal when she received the ball inside the box, turned quickly and shot the ball before it falls on the ground, but unfortunately for her, the shot was saved. 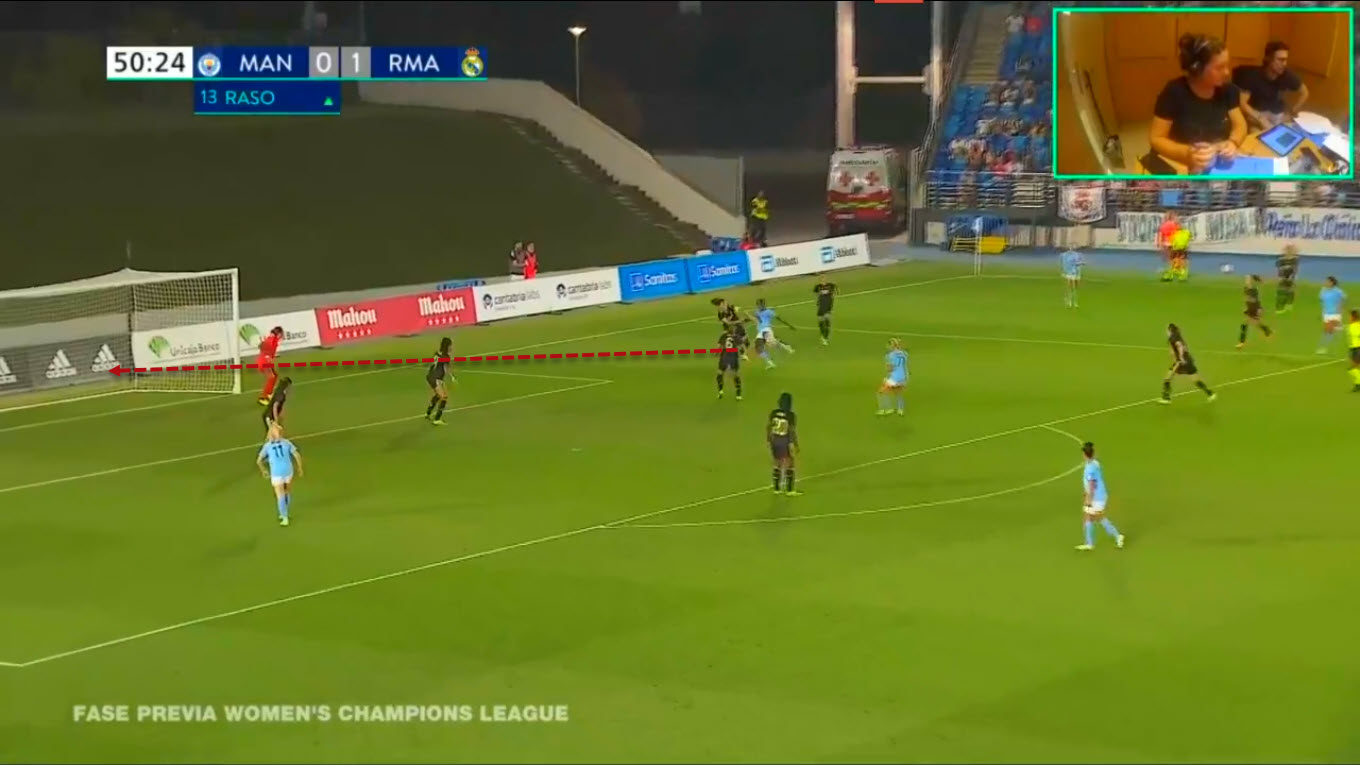 Moreover, the subbing of Hayley Raso provided some dynamism in the final third and liberated Hemp a little bit more. We saw the latter getting the ball more and running better on the left wing and she was able to provide a key pass in this action and the ending could have been better because the shot hit the far post and could have entered inside the net. 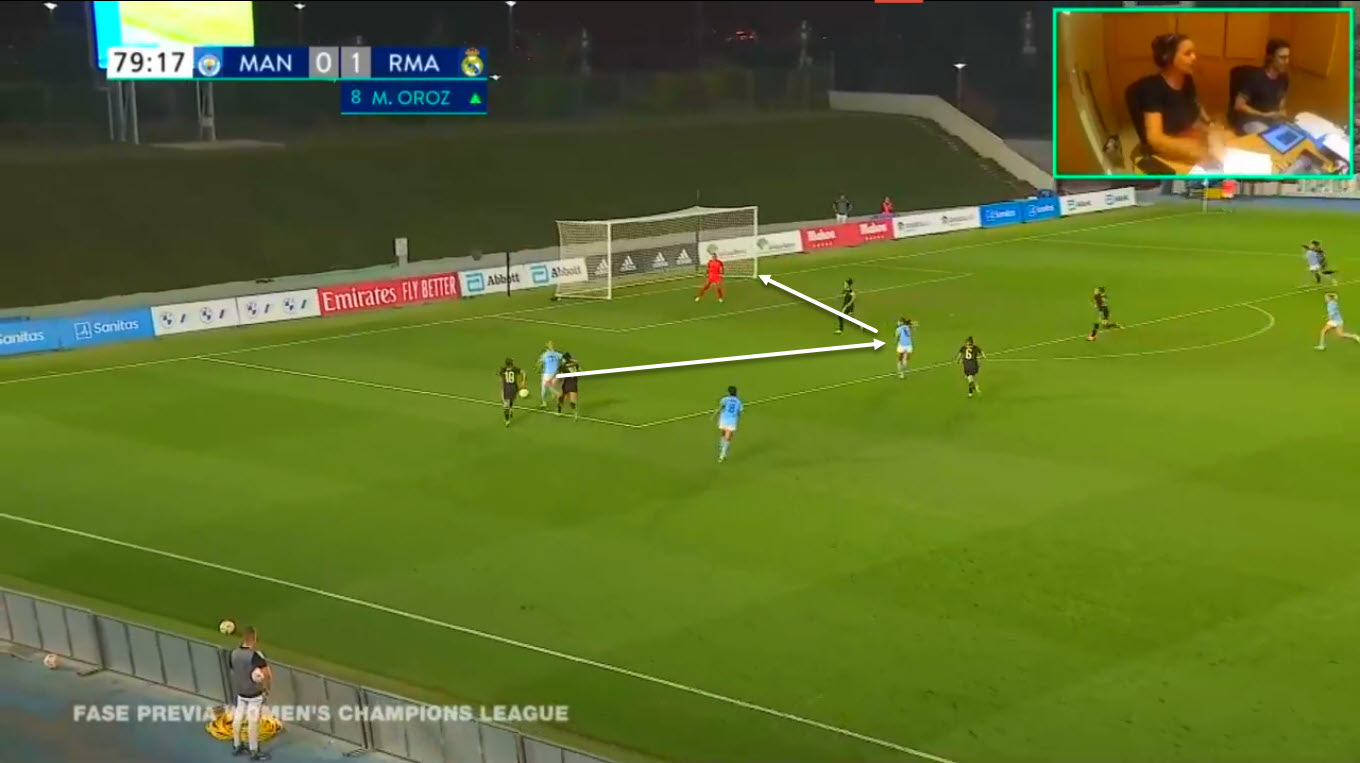 Manchester City lacked quality finishing in attack and dynamism in the build-up phase as well as in the final third because they were predictable on most occasions and Real Madrid players were faster in thinking and in action. That’s mainly why Real Madrid players looked more confident and better in duels as well. Manchester City will have to fix this issue very soon in order to not encounter such problems in the FAWSL, especially when facing top teams like Arsenal and Chelsea.

Real Madrid deserved their qualification more than Manchester City knowing that Real Madrid created more chances and were more dangerous inside the box. They will have to build on this performance to do better in the Spanish league and in the upcoming UWCL round. For Manchester City, the team should revise a lot of things mainly concerning the offensive phase as they need to exploit their abilities better and work on becoming less predictable inside the final third. Moreover, improving their finishing accuracy would be beneficial ahead of the new season.