We are now five games into this season’s Serie A campaign, and Napoli are one of four clubs who remain undefeated, currently sitting in second place behind Atalanta. Lazio have enjoyed a mixed start, losing once, drawing twice and winning twice – a record that leaves them in ninth place following their defeat to Napoli on matchday five.

Napoli finished last season off very strongly – a major contributing factor in the club finishing third and qualifying for this season’s UEFA Champions League. Seemingly, they have carried their impressive and deadly form over in this campaign too. This tactical analysis will provide insight into how Luciano Spalletti’s side overcame Lazio on their own ground, despite the home side taking an early lead. We will analyse the tactics deployed by Gli Azzurri in this fixture, as well as provide an analysis of Lazio’s collapse. 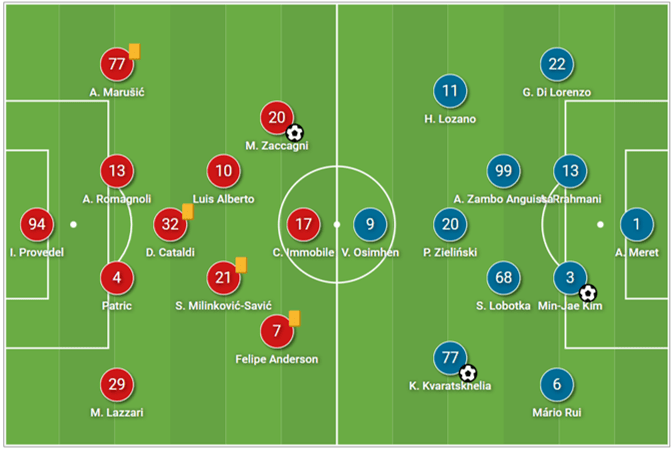 Hosts Lazio lined up in a 4-3-3 formation with a starting eleven that was unchanged from their previous match against Sampdoria. Star striker Ciro Immobile lead the line with wide support from Mattia Zaccagni and ex-West Ham United man Felipe Anderson. Maurizio Sarri selected a strong midfield unit that included Luis Alberto and Sergej Milinković-Savić, with a back line that included Patric and Alessio Romagnoli.

Luciano Spalletti‘s Napoli opted for a 4-2-3-1 with the goals coming from central defender Kim Min-Jae and winger Khvicha Kvaratskhelia. Amir Rrahmani came into the side at centre-back, and he was joined at the back by Mário Rui who was positioned in at left-back. An entirely different lineup in midfield consisted of Stanislas Lobotka and André-Frank Zambo Anguissa in the deeper midfield roles, with Piotr Zieliński in the more attacking midfield role. Victor Osimhen was the lone striker.

Lazio displayed confidence and quality in the opening stages of the game and showed strong signs of giving Napoli a tough fight. From pressing in good numbers with high intensity to attacking with intention and belief in the manager’s tactics, they were able to rock Napoli by taking an early lead after just four minutes. This section of the analysis will take a look at how Lazio started the game so well, before discussing the early signs of them dropping the intensity and quality levels.

Lazio’s energy and aggression startled Napoli, and the visitors struggled in possession. The example above shows exactly that – Napoli in possession just inside their own half, but a collective unit press from the hosts forced the possession back towards the goalkeeper. The shape of Lazio’s midfield in the press was excellent in this particular example – the closest player pressing the man in possession with the remaining players keeping a compact shape ready to accelerate the press when a trigger occurs. 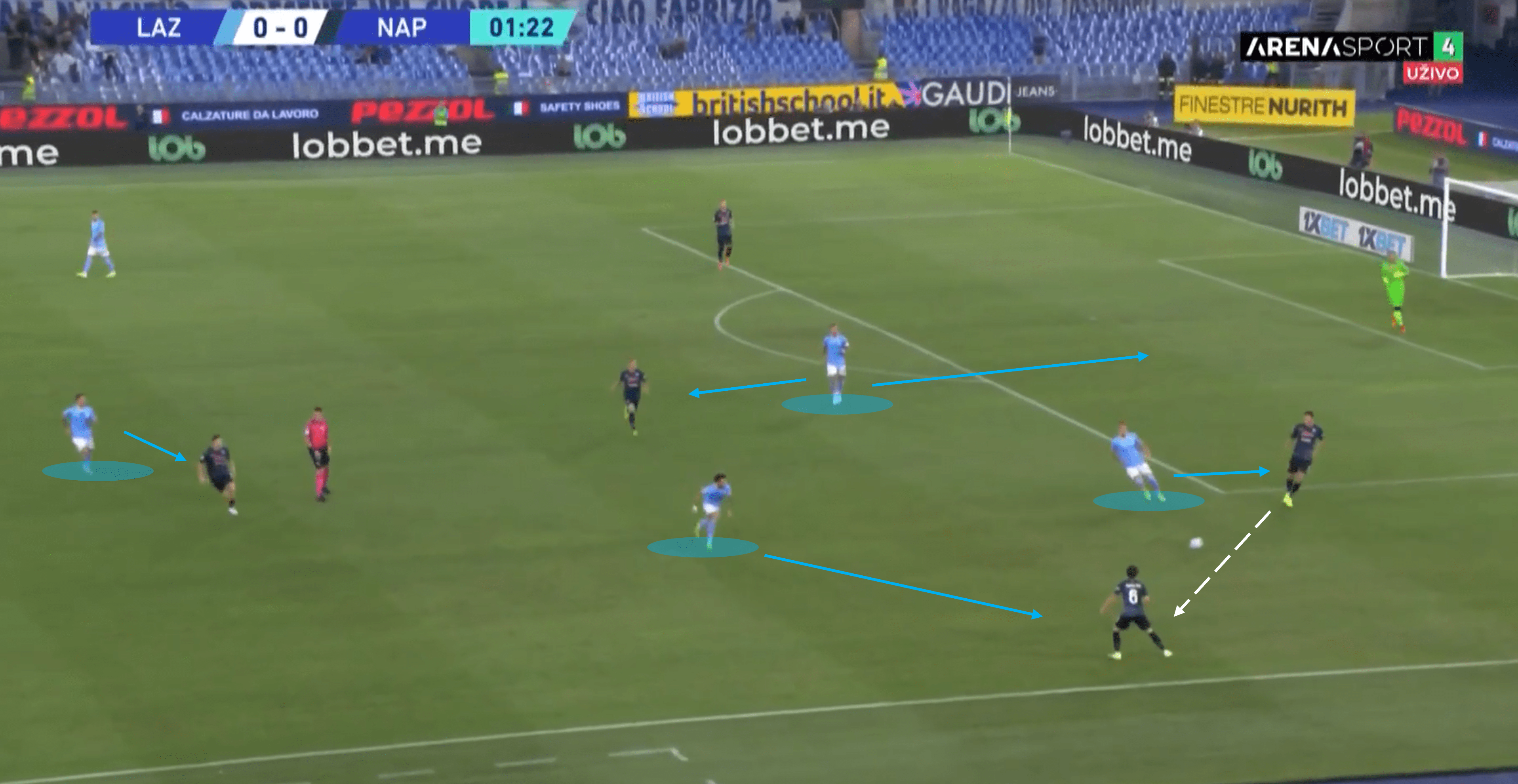 Above, we see two separate examples of Lazio pressing the ball high up the pitch. Immobile was the man responsible for applying pressure to the Napoli CBs, while the winger and closest CM would often work in tandem to apply pressure in deeper zones.

Both of these examples resulted in a turnover in possession thanks to the timing of the press on an individual level, as well as the player positioning in preparation and anticipation of the press – they gave Napoli next to no time to make their next move and reaped the rewards because of it. The second analysis was particularly important and impressive: as the ball arrived into the Napoli midfielder, Felipe Anderson and Milinković-Savić were quick to shut the ball down, resulting in a turnover, as mentioned. The proceeding attack is included in the analysis that follows.

Following the turnover in possession, Lazio could smell blood in the Napoli ranks and decided to launch a quick attack in transition. Milinković-Savić dropped into a pocket of space – a clever move that not only presented him as a good passing option going forward but also drew the opposition midfielders into him which freed up some healthy space on the right flank for Anderson, who then received the ball from his midfield teammate. 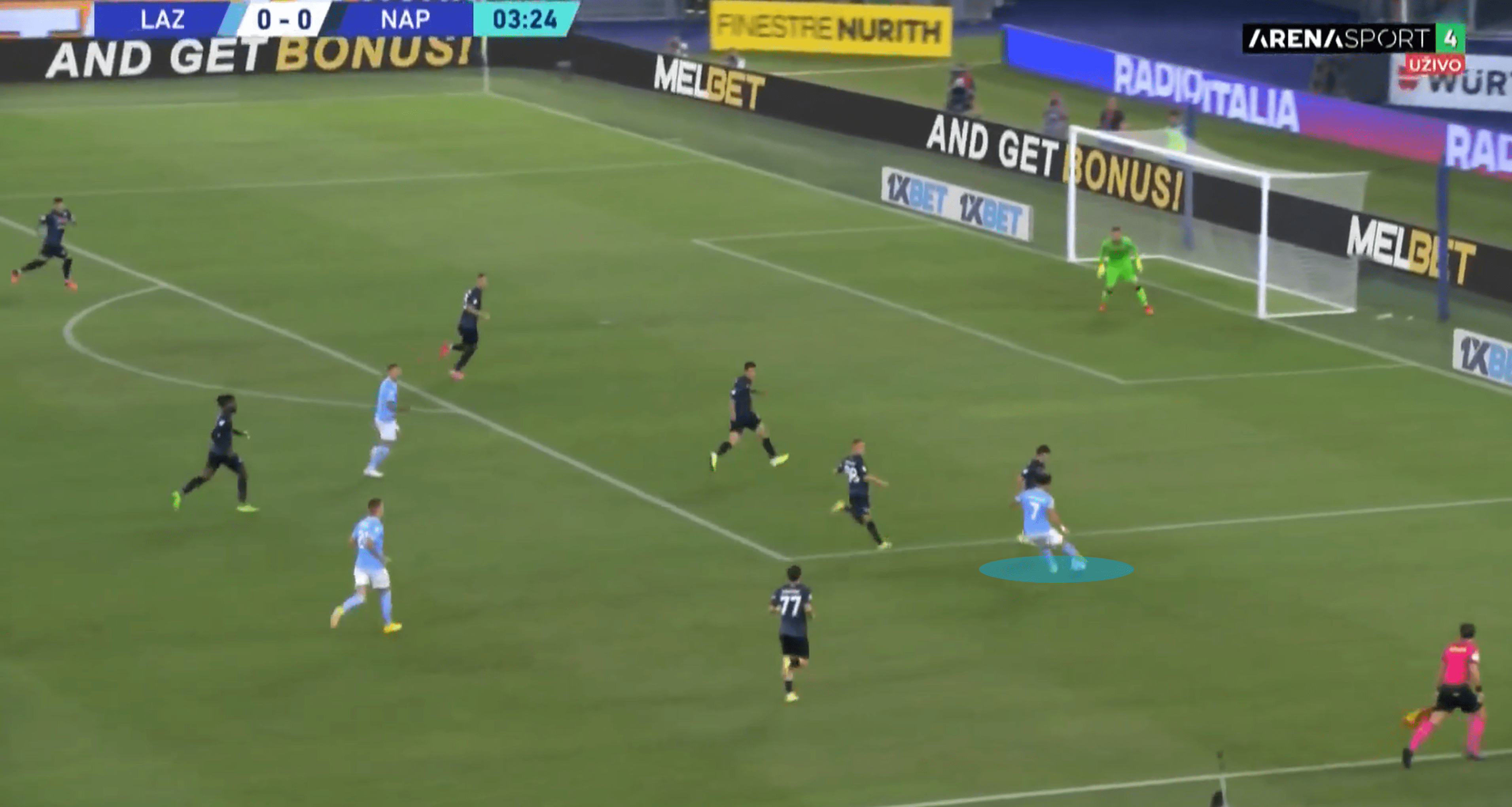 Felipe Anderson utilised his pace and tricky feet to drive forward towards the byline, causing panic throughout the Napoli defence. He knew that travelling at speed with the ball following a transition would make it extremely difficult to dispossess him in line with the rules, and the Brazilian had the wherewithal and vision to pick out an exquisite pass to Zaccagni at the edge of the box.

The winger was not tightly marked, allowing him to control the ball sufficiently well, but his body position was not great. As the defender finally put the pressure on, Zaccagni displayed good composure and footwork to bring the ball fully under control and throw a dummy before turning inside to unleash a shot that rocketed into the net.

The early goal seemed to act as a wake-up call for the visitors – a klaxon that spurred them on to be more proactive on and off the ball. For example, whenever Lazio found themselves in possession, Spalletti’s side was quick to press the ball, with good support from the midfield unit. These tactics made it very difficult for Lazio to control possession, therefore eliminating their ability to maintain the pressure they started the game off with.

Pressing like this in the opposition half always comes with its risks, but Napoli’s set-up was executed very well – Osimhen awaiting the inevitable next pass with his positioning forcing that pass to the keeper, and the midfielders behind him either marking an opponent or being on standby ready to unleash an extra individual press when called upon.

Following Napoli’s positive response to falling behind, they subsequently saw more possession and looked more fired up in duels. As a result, Lazio adopted a more defensive style of play in an attempt to contain their opponents. Instead, thanks to poor execution and positioning in parts, these tactics only invited Napoli to attack and have possession further up the pitch.

While Lazio’s shape in the analysis above did them no favours as they weren’t really closing anybody out of the game, Napoli’s adaptation to Lazio’s behaviour deserves credit. It’s a small detail, but the shape of the back four – centre backs with large space between them with the full-backs high and wide – this is part of what forced Lazio’s hand in transitioning to defensive tactics.

Unlike Lazio, Napoli showed grit and determination to maintain that pressure, both in and out of possession. They found the confidence to commit more players in attack but also had the vision and creativity to play through the thirds cleverly, using Lazio’s lacklustre shape to their advantage. This section of the report provides an analysis of Napoli’s approach to attack.

This analysis stems from a basic factor which is Napoli simply committing more players to an attack. This indicates a surge in confidence and momentum, but the number of players isn’t a dangerous amount, which indicates good tactical awareness. They also have players in good areas rather than sending players forward for the sake of it – the right-back pushes forward to offer support to the winger from a good position, while the striker is joined by his teammates from left and central midfield in the box, adding to the presence in the box. 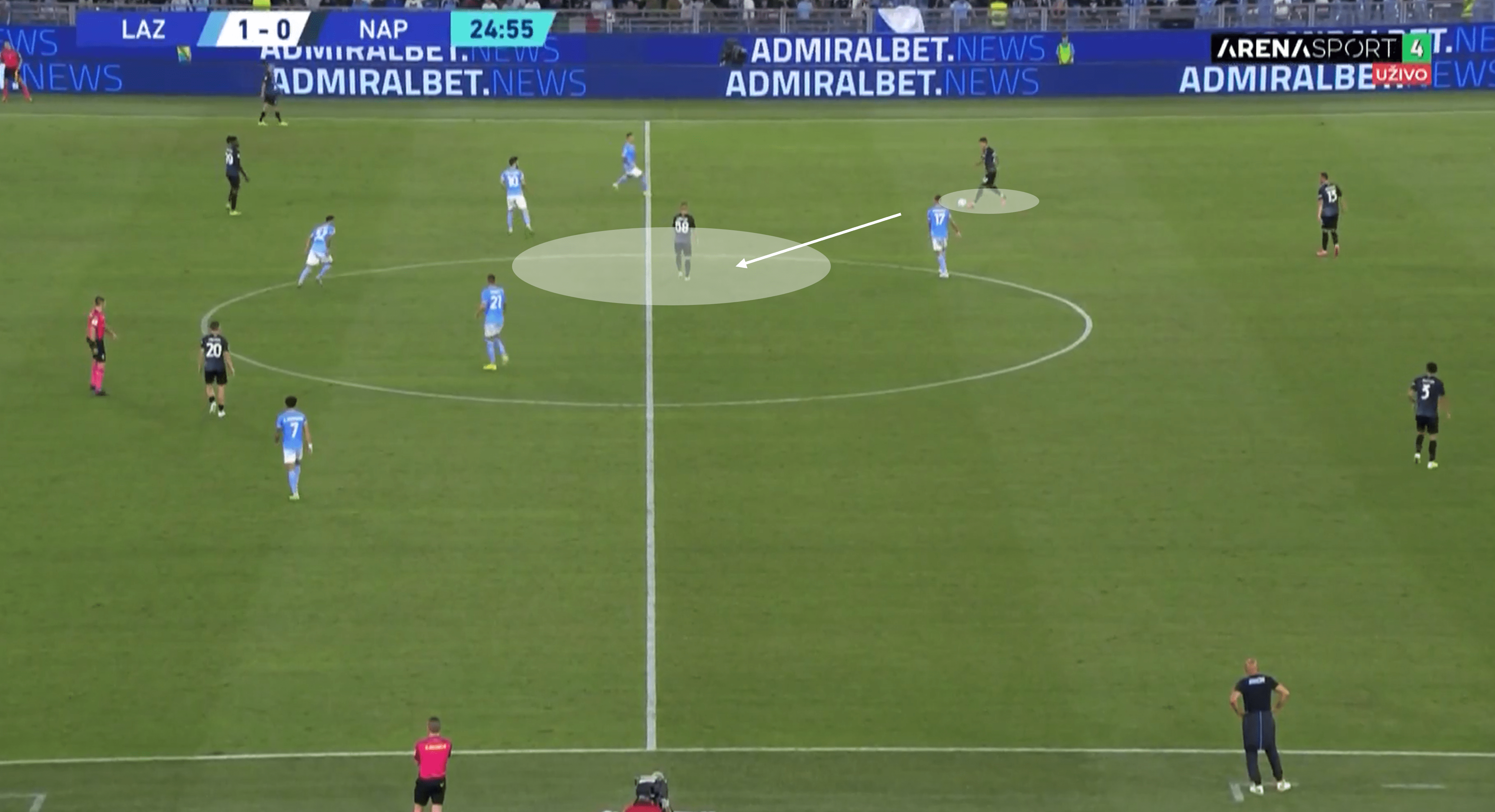 This next analysis highlights the aforementioned ability to play through the thirds, using gaps in Lazio’s set-up to make progress. Lobotka drifts into a position at the halfway line to receive the ball unmarked and responds well when the pressure does inevitably arrive. After a clever spin to beat his marker, he has the foresight to fire a pass into Osimhen to keep the ball moving forward quickly.

Napoli knew that Lazio would sometimes be slow to react to situations like this unfolding, which in this case gave Lobotka the licence to pick their midfield apart with one touch and a pass.

Even getting towards the latter stages of the game, Lazio would not improve their defensive set-up in midfield zones and quelle surprise, Napoli identified this again and practically played around the Lazio set-up.

Defending compact as a unit can sometimes be very beneficial and can often be the key to stopping possession-dominant teams from creating goal-scoring opportunities. However, it is not as simple as simply standing close to each other. There is no awareness from the Lazio midfield four – who are they marking out the game by setting up this way? There isn’t a Napoli shirt anywhere near them as they’re too busy attacking in areas where there is almost no defensive presence.

Napoli have a tendency to play via the flanks anyway as it is a good route in eventually getting the ball into the physically dominant striker Victor Osimhen.d Lazio’s tactics only encouraged this method at times. 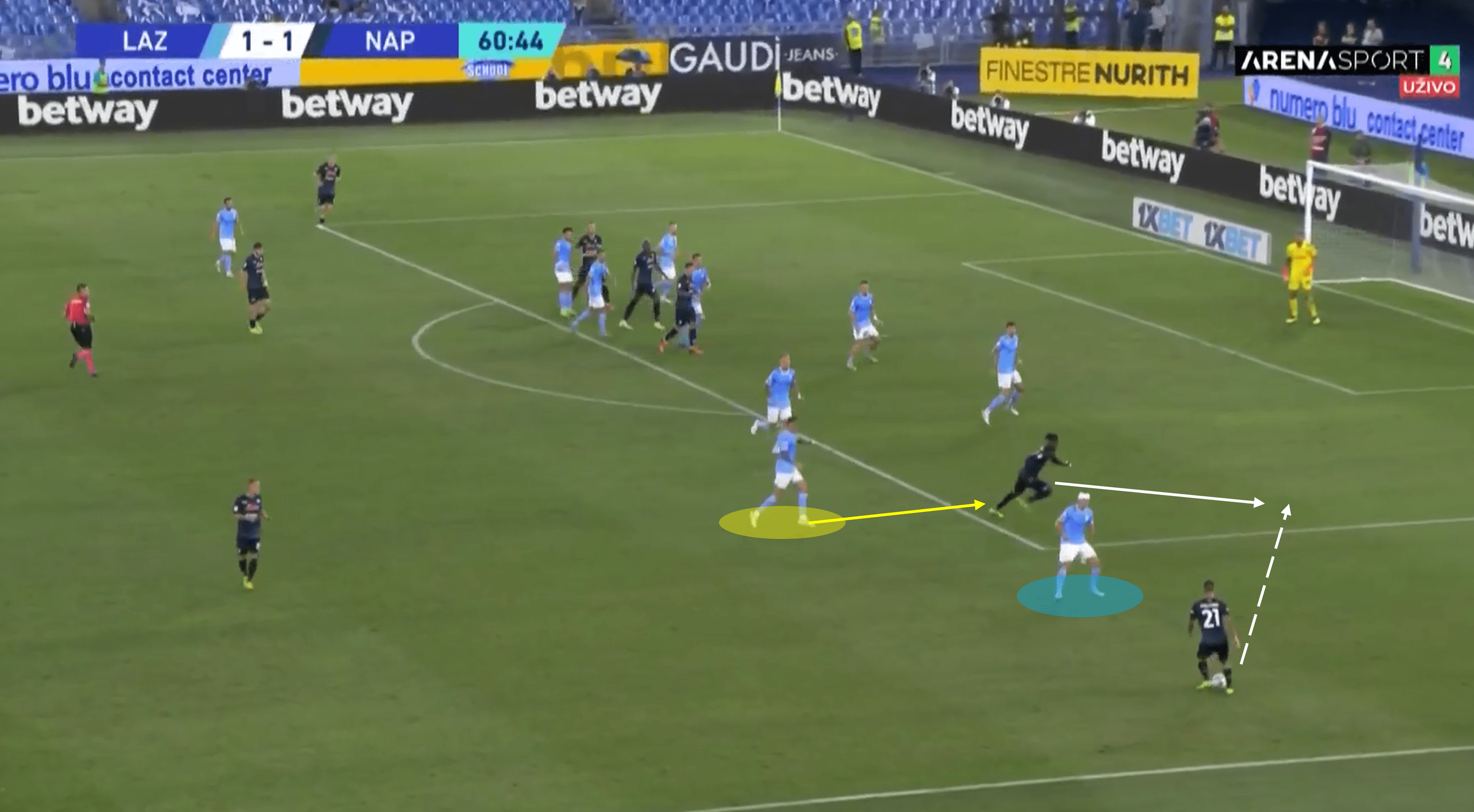 So far in the analysis of Napoli’s attack, we have highlighted their attacking intention via sending/keeping players forward to increase the pressure inside the box, and we have also discussed their ability, both as a team and collectively, in thinking outside of the box and playing incisive passes into dangerous areas. Their winning goal incorporated these elements, following a corner which was cleared. They kept players forward and were able to sustain the attacking pressure. The attack culminated in an inch-perfect pass from Zambo Anguissa into the path of Kvaratskhelia, who was able to collect the ball under little pressure and fire home.

Lazio’s defending (or lack thereof) in the first of these two images allowed Napoli to be as dangerous as they were. Napoli were afforded too much space on the right flank, with little pressure and no marking from the hosts. The Lazio player highlighted in yellow should have supported his teammate at left-back by marking the Napoli man making the run in behind him towards the byline – this simple step could’ve prevented the goal.

In reality, the scoreline of 2-1 flatters Lazio – it could have been three or four quite easily. The hosts had the perfect start to the game and took the lead through no fluke, but opted against sustaining the pressure and looked to defend the lead; then defend the draw after Napoli’s equaliser.

The defensive tactics were executed poorly and allowed Napoli strong possession and plenty of chances on goal, which lead to them being deserved winners. They showed a good ability to highlight opposition weaknesses and exploit them. Lazio have plenty of defensive work to do on the training pitch if they are to put up a fight for European qualification again this season, while Napoli will be delighted with their start to the season. 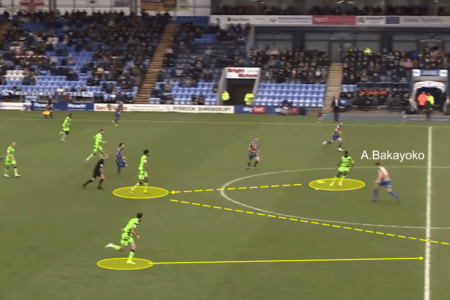 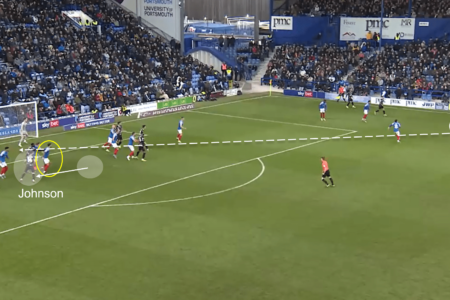