Serie A 2021/22: Why Lazio’s victory over Genoa may have papered over the cracks – tactical analysis

Off the back of two games without a win, in both Europe and Serie A, Lazio looked to bounce back with Genoa on the horizon. Over the last couple of seasons, Lazio has been a mixed bag under the previous manager Simone Inzaghi. Under the current Inter manager, Lazio’s league position was quite topsy-turvy, as European football was not always a guarantee. Now under ex-Chelsea manager, Maurizio Sarri, le Aquile looks to create a sense of consistency regarding finishing in the Italian top four and possibly punching slightly higher up the table at a later date. Genoa’s league position has also varied over the last couple of seasons, as they constantly switch from mid-table safety to relegation battling.

So far this season, Genoa see themselves on the bad side of their cycle and currently sat 18th before the matchup against Lazio. The week prior, the higher-ups within Genoa made a managerial change and sacked their current manager, Davide Ballardini, and replaced him with the legendary striker for Andriy Shevchenko. Shevchenko has shown he can coach an organised defence with his work with the Ukrainian National team during Euro 2020, and this quality of coaching is needed as Genoa has the 4th worst defence in the league. Work surely needs to be done.

In this tactical analysis, I will discuss Genoa’s offensive tactics, besides how Lazio fared within this game when progressing the ball forward and creating. Last, I will look into some of Genoa’s missed opportunities for attack that will need rectifying if they wish to stay up in the Italian topflight.

Lazio made use of a 4-3-3 formation during this match, with Thomas Strakosha. In defence, Elseid Hysaj and Adam Marušić are at full-back, with Luiz Felipe and Francesco Acerbi at centre-back. In Lazio’s midfield three, Sergej Milinković-Savić, Danilo Cataldi and Toma Bašić. In attack, ex-Barcelona attacker Pedro, with Felipe Anderson and Mattia Zaccagni.

Genoa made use of a 3-5-2 formation, with Salvatore Sirigu in goal. At centre-back, Johan Vásquez, Zinho Vanheusden and Domenico Criscito with Andrea Cambiaso and Paolo Ghiglione at wing-back. In midfield, Milan Badelj, Manolo Portanova and Stefano Sturaro. In attack, Mattia Destro and Goran Pandev. 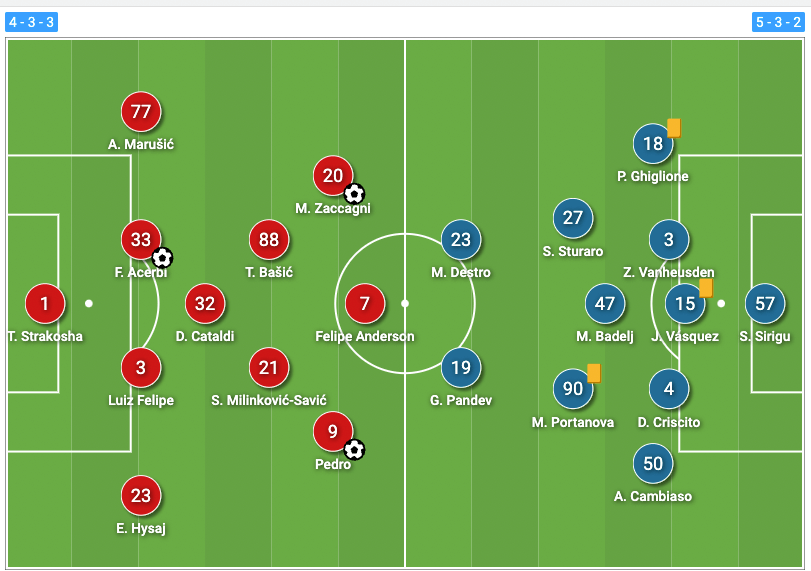 When taking a glance at the Serie A table, based upon position, some may assume Genoa are a team with no structure or identity, but this is an incorrect notion, and in possession against Lazio, this was on display. During this match, Genoa made use of a 3+1 structure during the first phase of play, their two more advanced central midfielders, Manolo Portanova and Stefano Sturaro the half-spaces. During the build-up, Genoa used wide spaces and circulated the ball within the spaces. In addition, Genoa made use of some interesting countermovement and rotations when occupying within the wide zones, which massively contributed to their ball progression. When initially getting the ball into the wide areas, Genoa excelled when using their width against Lazio’s narrow shape, as was able to simply play over them. 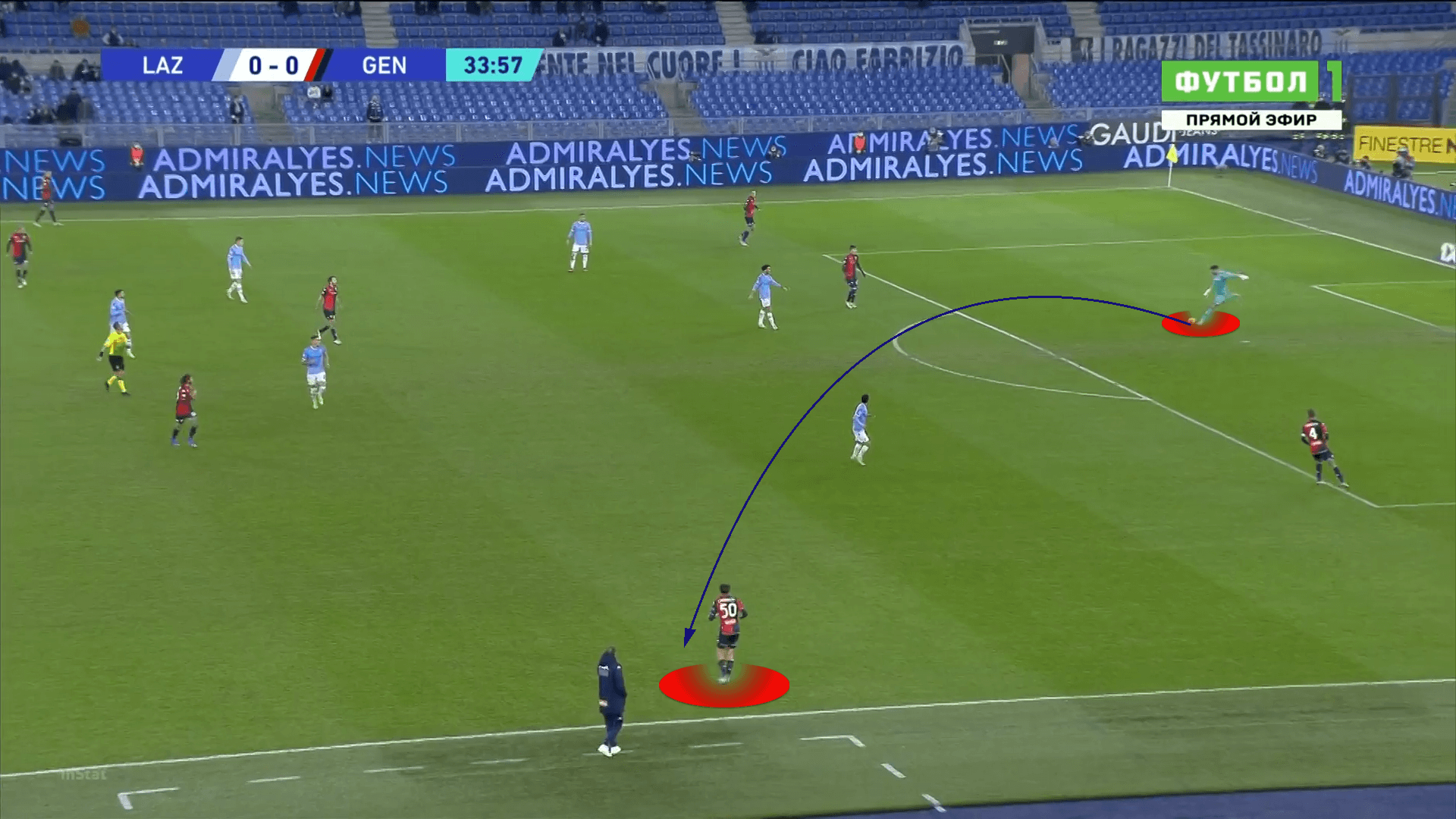 Now, Andrea Cambiaso is in possession. As he sets himself, Manolo Portanova moves slightly wider to become a passing option by the by-line. Striker Mattia Destro drops significantly deeper as a support option and moves towards the open space in front of him. On Genoa’s left-hand side, these types of interactions were commonplace, when they could get the ball out wide, but actually, getting the ball into this area was challenging for them at times. A major flaw in their build-up game was their lack of ability to progress the ball through the centre of the field. Lazio made use of a narrow 4-3-3 and 4-4-2 block, but Genoa had opportunities to bypass Lazio’s defensive structure, but Genoa’s holding midfielder, Milan Badelj’s lack of mobility was a huge contributor to his team’s offensive downfall.

The Croatian midfielder is 32 years old, so it is fair to say his best days on a football pitch are over when discussing his physical attributes. When operating as a lone number 6, this player must get the engine to make the required lateral movements, when becoming a passing option; and this skill is something that Milan Badelj did not show, and this hurt Genoa in possession. 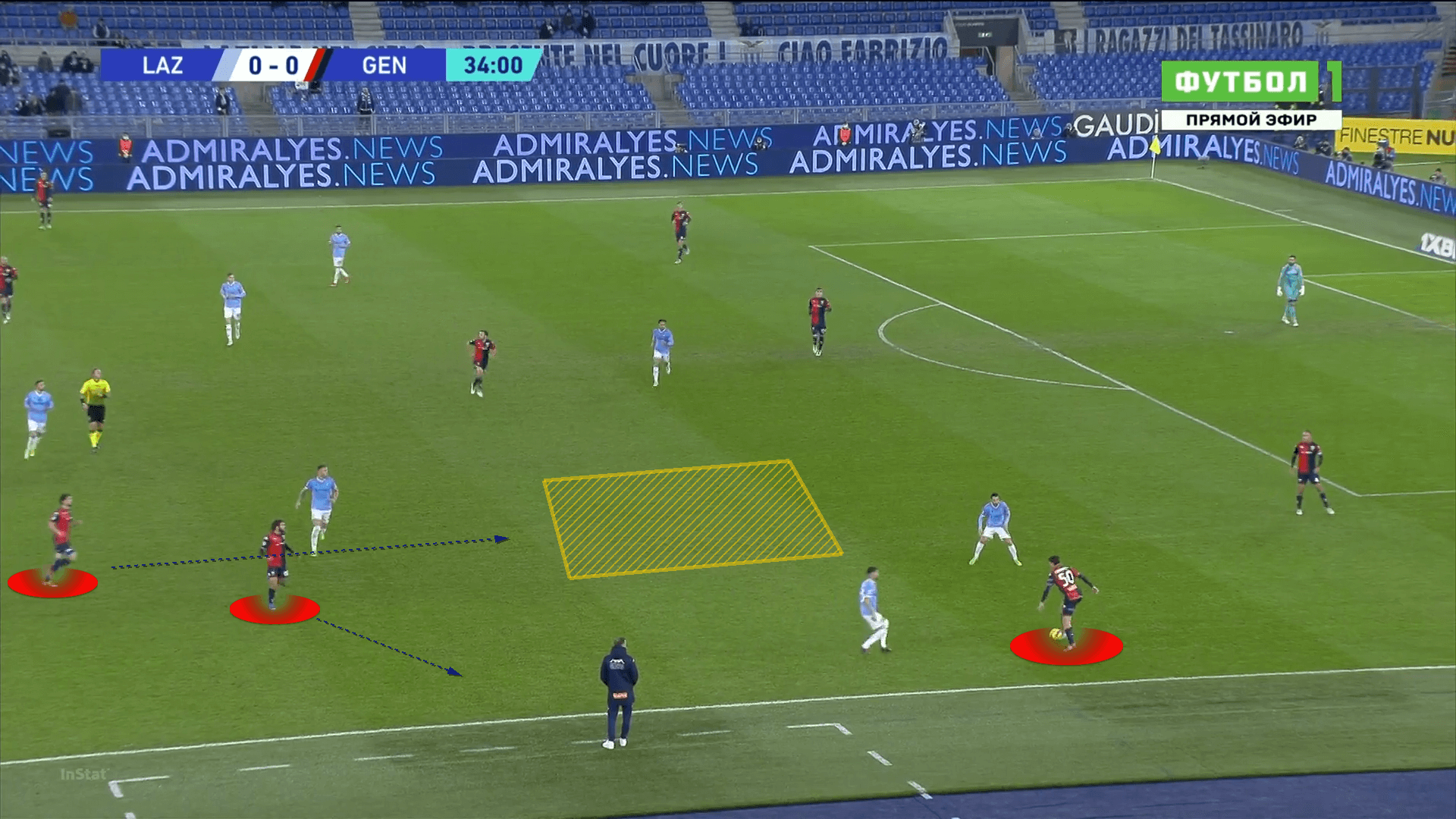 Here, centre-back Johan Vásquez is on the ball. In front is Lazio’s front three attempting to press, as well as their midfield three, man-marking Genoa’s midfield. Milan Badelj is stationed in between the lines, clear of any marker, but does not make the correct movement to become a passing option and stays within Felipe Anderson’s cover shadow. Now, Genoa is forced to play long. 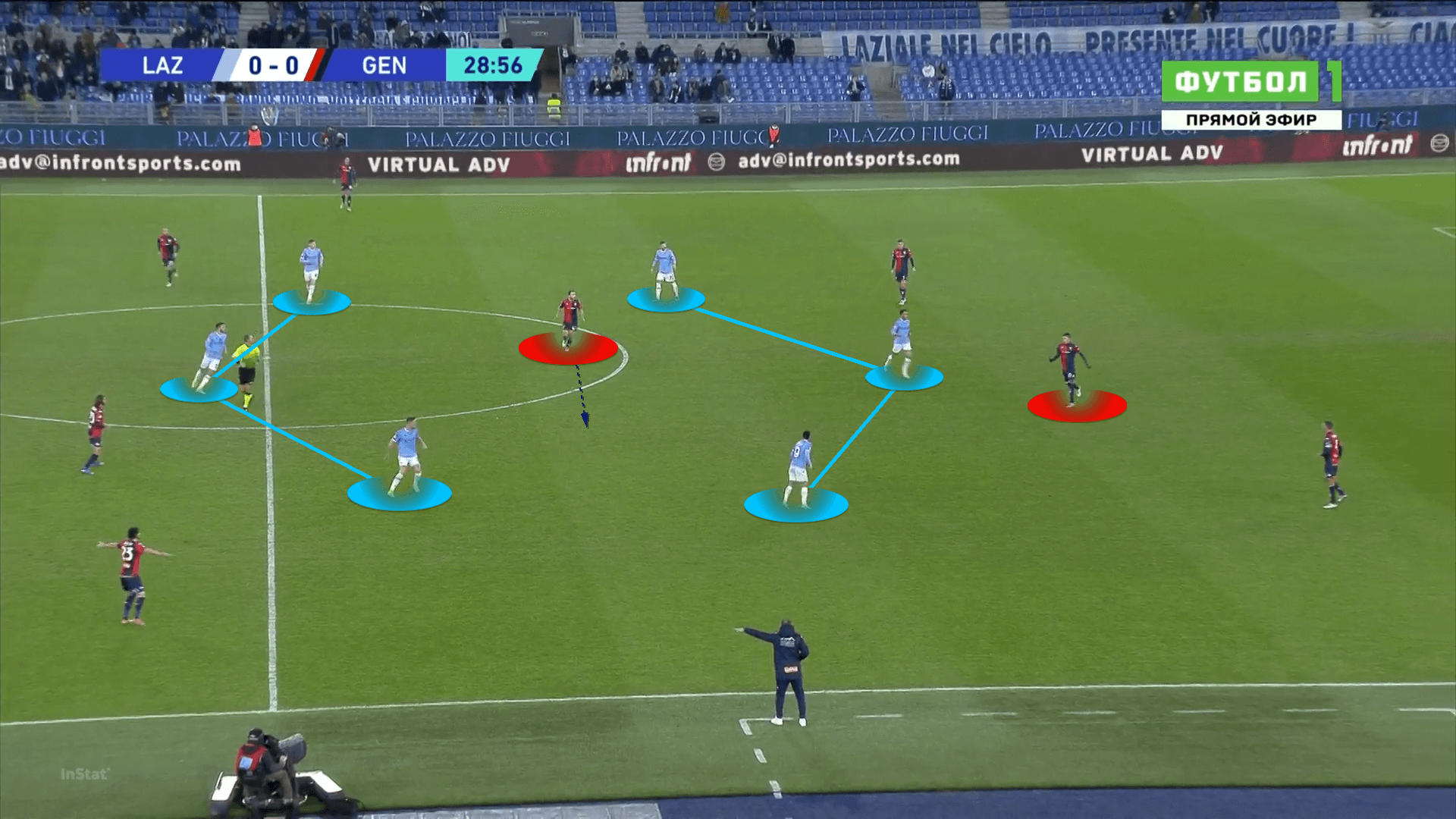 Badelj’s lack of mobility can be seen again here, as Genoa is attempting to play the ball forward using wide avenues. As the ball is about to play to the wing-back, Badelj does not react and creates a passing angle for the next player in possession. Instead, Badeli, at a jogged pace, moves towards the player who is about to release the ball. 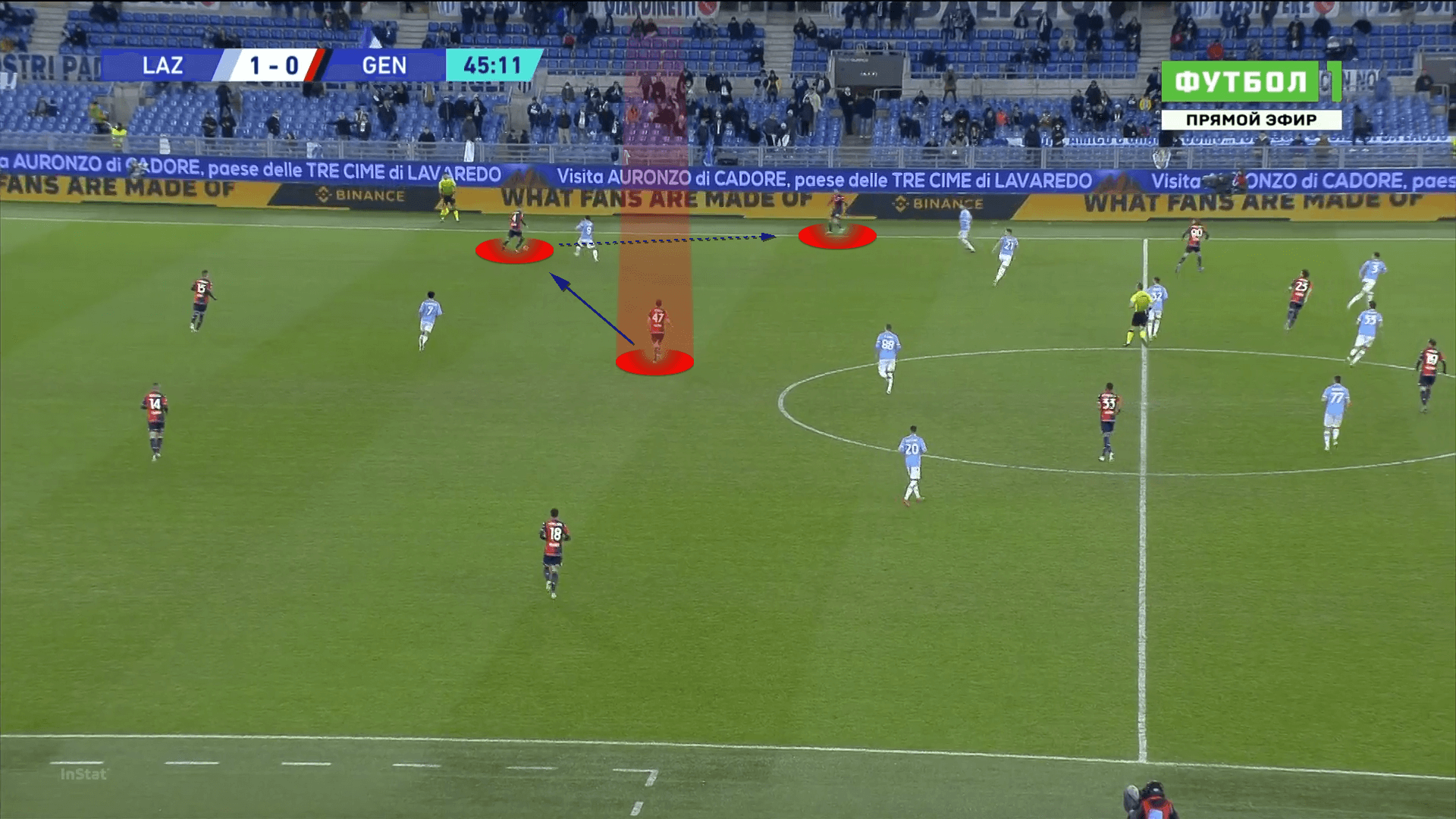 Based upon the 3-1 score-line, the xG Lazio amassed during this game, concluding at 2.07 compared to Genoa’s 0.17, without watching the match, most would have the common opinion of Lazio being a dominant force and nullifying their opposition. The number does not lie, but upon observation, Lazio flattered to deceive throughout, and their dominance was not clear-cut. In the past, Maurizio Sarri has been labelled with a tag claiming his football teams are quite languid and fairly boring, and this game is a true testament to this. In a similar vein to their opponents, Lazio wanted to make use of the wide areas, and shift Genoa’s block with clever movement. Lazio had a fondness for playing through the right-hand side, compared to the left, which makes logical sense with the likes of Pedro and Sergej Milinković-Savić on that side. A common theme within this rotation; Elseid Hysaj driving with the ball in the half-space with Milinković-Savić and Pedro on either side of him. 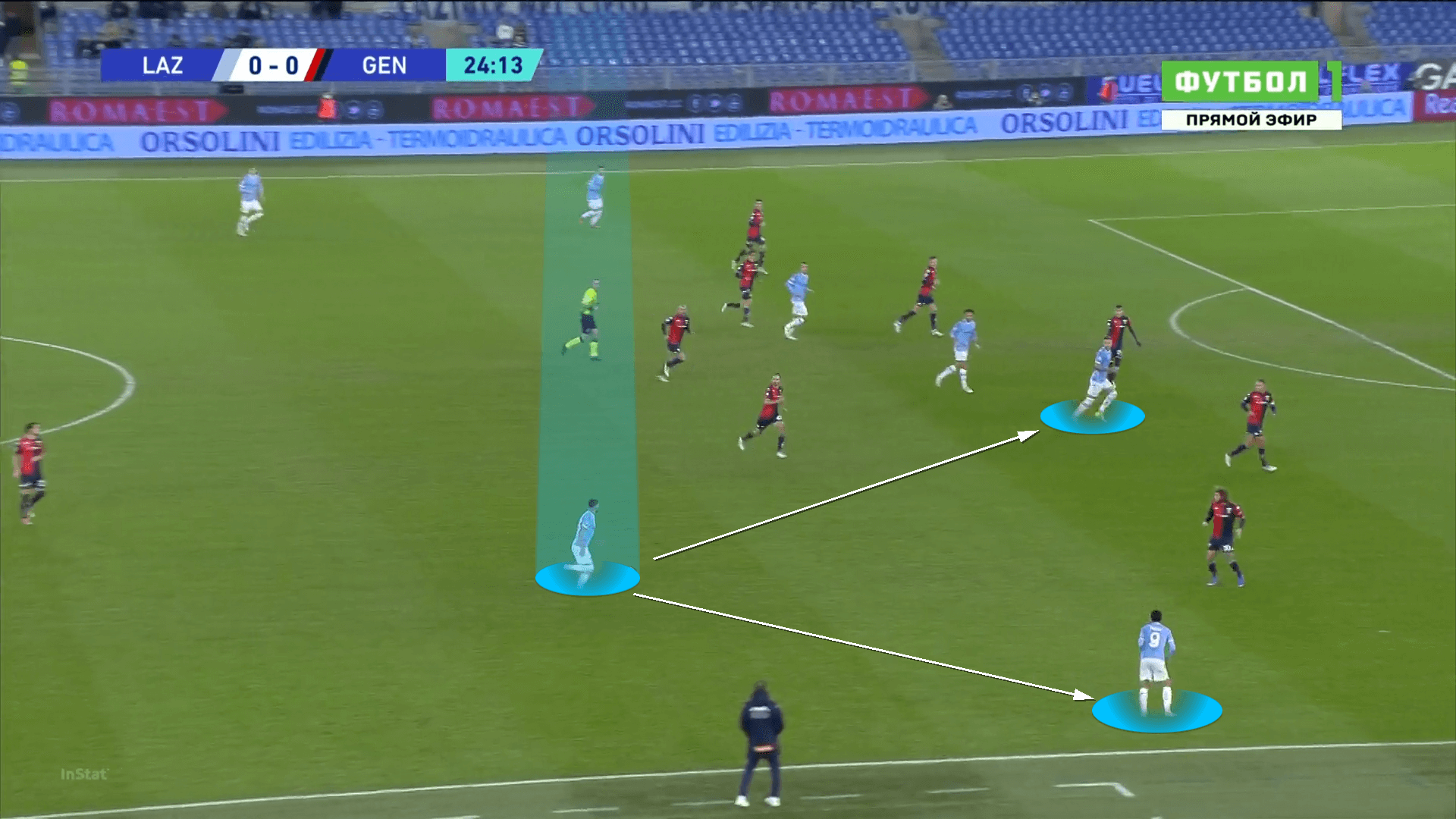 While these wide triangles worked during spurts within their game, this tactical plan did not last long, as Genoa defending in wide positions was quite strong. Here Pedro is in possession, and Genoa has created a 5v4 in their favour to negate Lazio’s progress in this area. 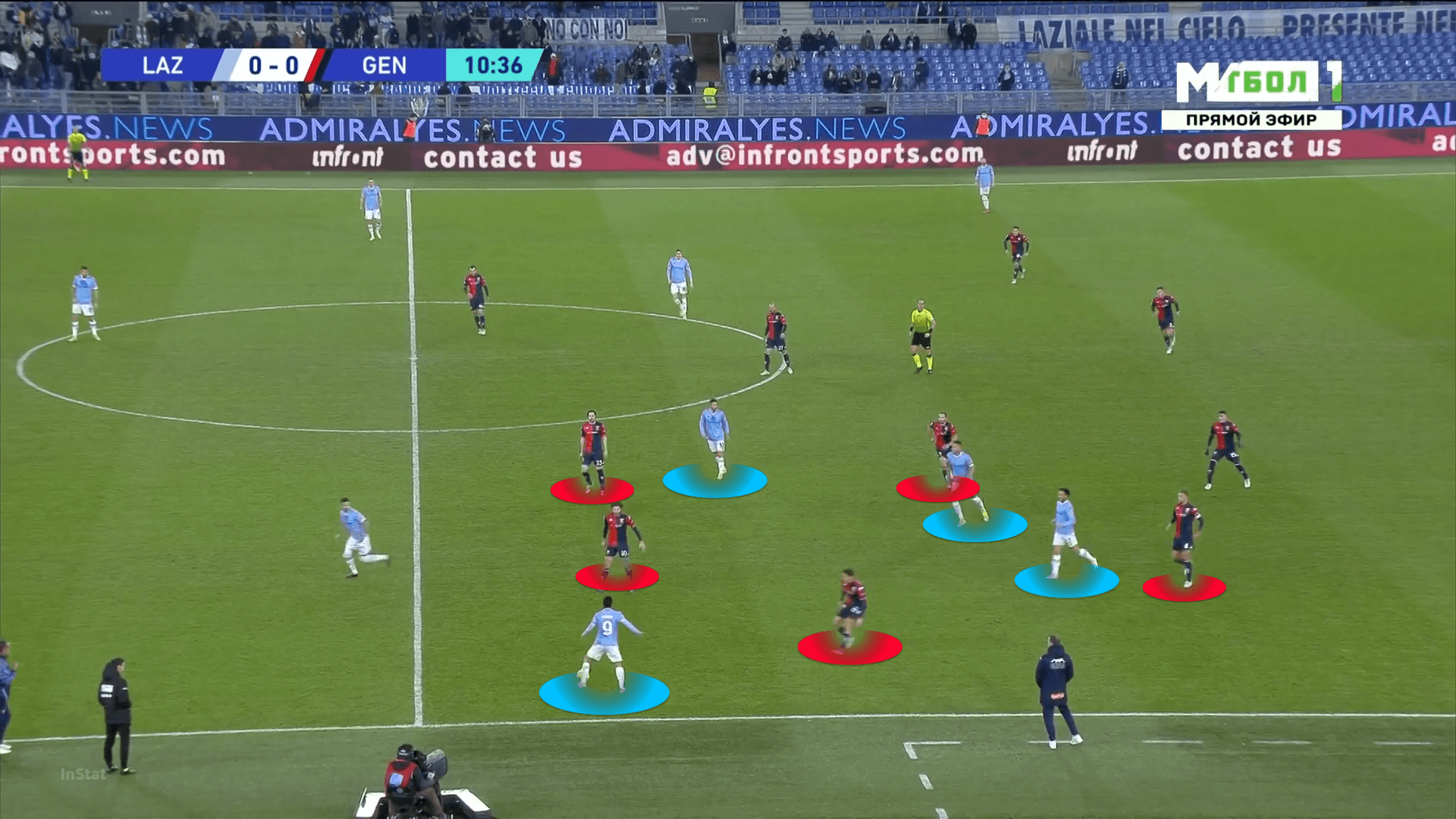 This defensive numerical superiority created by Genoa was quite common during this match, and Maurizio Sarri’s men had no genuine answer to the problem. Throughout, Lazio showed no variation or true imagination to get past opposition pragmatism and showcased poor passages of play during this first phase.

Here, Luiz Felipe is highlighted as he is in the ball. The defender is looking for a passing option, but a suitable option is not presented to him because of the spacing of the Lazio players. Within an offensive structure, opening the pitch to stretch the opposition is a basic, yet fundamental, principle. However, a level of compactness must be in use when in possession to create passing networks. 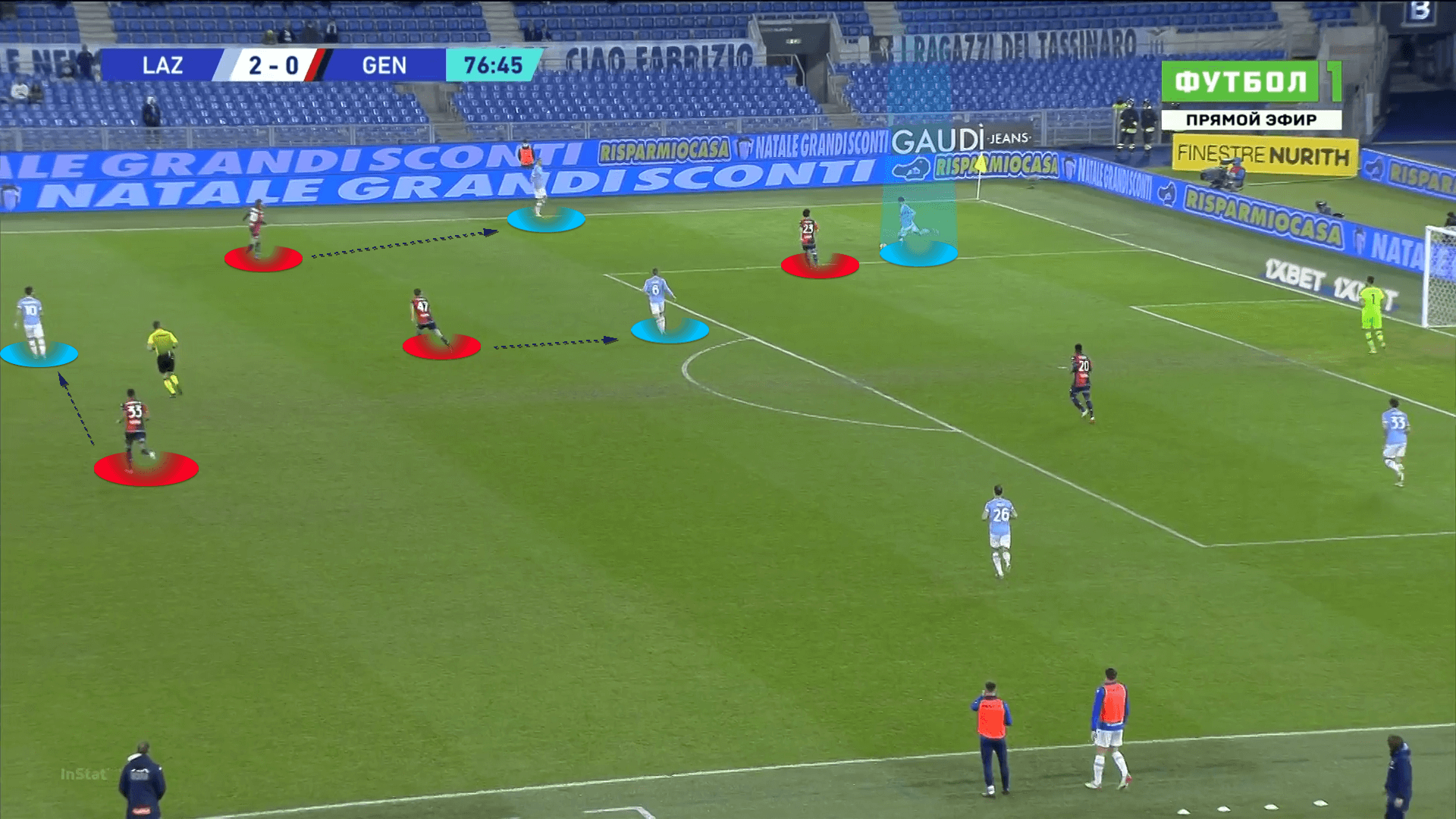 Lazio did well to capitalise upon their opponents’ mistakes for their first goal, but soon after, did not control the aim as expected. Their second goal of the match came from a corner scored by Francesco Acerbi, which massively shifted the game-state in their favour. Their final goal came through substitute Luis Alberto, who provided a magical assist to cap off the game. Overall, Lazio’s goals were scored at the right time, but based on their overall play, the scoreline may paper over the cracks.

As mentioned prior, newly appointed manager Andriy Shevchenko had work to do regarding the restructure of Genoa’s leaky defence, and this notion can also be repeated about their attack. Genoa before their game vs Lazio was placed within the bottom five worst attacks in the league, only putting the ball in the back of the net 16 times. Shevchenko’s men’s poor attacking form continued as they failed to amass for the four shots with two registering on target.

In addition, Genoa was quite wasteful out wide, as we can see their successful and unsuccessful crosses during this match. Only three crosses were successful out of 12 attempts. Juventus loanee Nicolò Rovella was heavily missed throughout, as he could have provided the creative spark that could have placed Genoa in a better offensive position. 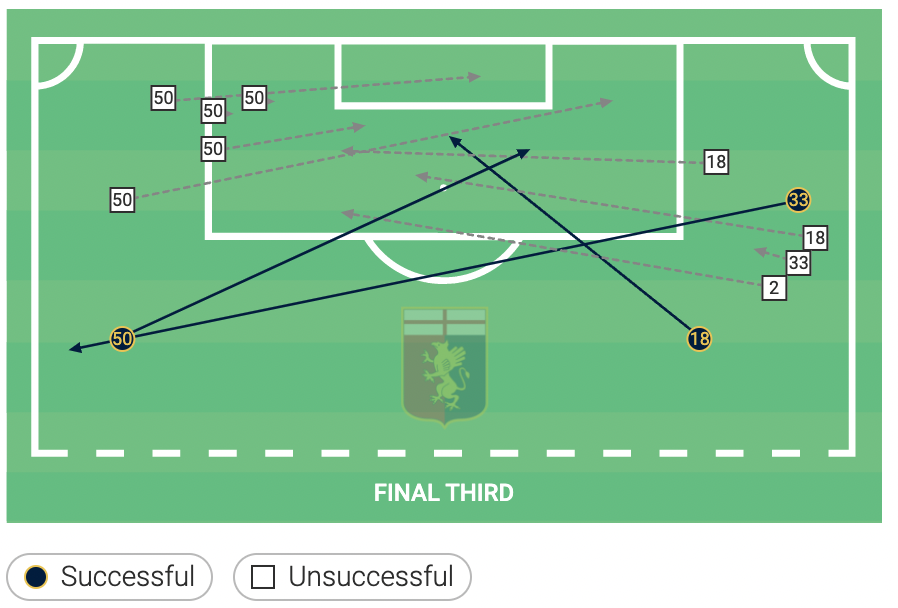 While both Lazio and Genoa operate at different sections of the Serie A table, both Maurizio Sarri and Andriy Shevchenko have been tasked to complete the same task at their respective clubs. To create a sense of consistency. Most are pining for Genoa to be playing their football in Serie B next season, but with his team’s performance against Lazio, some positives can be extracted. Lazio, on the other hand, did not play to their ability, but at the end of the day, it’s the three points that count.