A highly exciting clash was on display on Wednesday as Napoli battled Atalanta at Stadio San Paolo in matchday 10 in Serie A.

Both teams were equally strong and have been performing extremely well since the start of the season. Atalanta, in particular, came into the match following a 7-1 thrashing at home against Udinese. Gian Piero Gasperini’s side sat in the third place as they managed to collect six wins, two draws, and a loss prior to the match against Napoli.

Meanwhile, the home side have also been rather solid, but need to be able to keep their consistency if they are to challenge for the top spot this season. Dropping points against SPAL in their 1-1 draw away from home in the last match surely didn’t help. Lorenzo Insigne and co. were definitely eager to earn three points in front of the home fans in this match.

In this tactical analysis, we’ll break down the tactics set up by Napoli and Atalanta in this match.

Ancelotti deployed his side in his favourite 4-4-2 formation. Some changes of personnel can be seen with David Ospina, Nikola Maksimović, José Callejón, Fabián Ruiz, and Hirving Lozano coming into the starting lineup. Meanwhile, Alex Meret, Kévin Malcuit, Piotr Zieliński, Eljif Elmas, and Dries Mertens all warmed the bench. Sebastiano Luperto seemed to start in the left-back spot in this game, having started as a left-sided centre-back in the last match.

Gasperini, on the other hand, made very few changes in terms of system for this game. La Dea were deployed in a 3-4-1-2 system with Papu Gómez playing in behind the two forwards, Mario Pašalić and Josip Iličić. They seemed to play in more of a 3-4-3 shape in their last match against Udinese though, with Gómez and Iličić playing on the left and right-wing respectively and Luis Muriel as the main striker.

José Luis Palomino, Remo Freuler, and Robin Gosens all came back into the starting lineup for this game. Simon Kjær, Luis Muriel, and Timothy Castagne were relegated to the bench.

Napoli were trying to show their attacking intent right from the kickoff via quick exchanges of passes and active movements upfront. However, with Atalanta keeping their shape narrow and utilising tight player-oriented marking, Napoli really had a difficult time building their play up and playing their way out from the back.

Napoli tended to start from the back with the goalkeeper distributing the ball short to either of the two centre-backs. Ancelotti’s side would then like to progress through the middle rather than move the ball wide. They usually did so by passing the ball towards either Allan or Ruiz.

However, Atalanta set up a medium-high block in this game. La Dea would try to press Napoli’s two centre-backs man for man. However, they seemed to have no intention of blocking access towards the wider area which allowed Napoli to move the ball wide when in the buildup. Despite so, they’re still unable to progress through the middle as they’d like to due to Atalanta’s tight player-oriented marking to render the two centre-mids inaccessible.

In this case, the centre-backs’ options were mainly to go wide or to try a much riskier pass towards either winger who dropped in the half-space (in this picture, it’s Callejón). However, Napoli would still always look to play the ball to either of the two centre-mids – either to distribute the ball wide again or force their way through the middle if there’s an opportunity to do so.

As mentioned earlier in this tactical analysis, Atalanta’s defensive tactics were to keep their shape very narrow in order to crowd the middle as well as create an overload on either flank.

Here we can see Atalanta with their defensive block. They still set themselves up in a 3-4-3 system in defence albeit flexible due to their player-oriented or option-oriented approach when it comes to marking. As you can see, Napoli’s players were all marked man for man in here while the ball-carrier was being closed down by Gosens. This forced Giovanni Di Lorenzo to play the ball back again. Iličić, of course, already anticipated the backpass and started pressing when the ball’s played back, putting the defenders under more pressure.

However, with Napoli moving the ball quickly to switch the flank of attack, Atalanta didn’t always have enough time to move their block and switch their focus. As you can see in the picture above, Iličić managed to anticipate where the ball was going to be played and pressed the Napoli defender, however, Kalidou Koulibaly quickly moved the ball with a first-time pass towards Luperto who’s free out on the left side of the pitch.

Hans Hateboer, left Insigne for Rafael Tolói to mark and tried to quickly close down Luperto as you can see in the picture above. However, with an abundance of time and space, Luperto was very comfortable on the ball and able to distribute the ball forward towards Insigne who was too quick for Tolói. The Napoli captain then released a dangerous diagonal through pass from the half-space but it was intercepted rather easily.

Napoli mainly tried to break through Atalanta’s defence using the active movements of their players in order to disorganize Atalanta who, as mentioned numerous times in this tactical analysis, used player-oriented pressing and marking. This was perhaps not very obvious in the first half, but far more apparent in the second half.

In the picture above, Insigne dropped deep and asked for the ball to feet while being chased down by Tolói. Luperto played the ball to his captain and the Italian winger used his agility to quickly turn after receiving the ball and then released a wonderful diagonal through pass onto the path of Callejón. The Spaniard exploited Freuler and Gosens’ lack of awareness of his positioning and made a blindside run towards space in behind the defence.

With Palomino dragged out and Djimsiti far too focused on guarding Lozano, Callejón was left free with time and space inside Atalanta’s box. The former Real Madrid man, however, failed to put the ball into the net.

Pretty much the same mechanism of attack can be seen in the process of Napoli’s second goal. 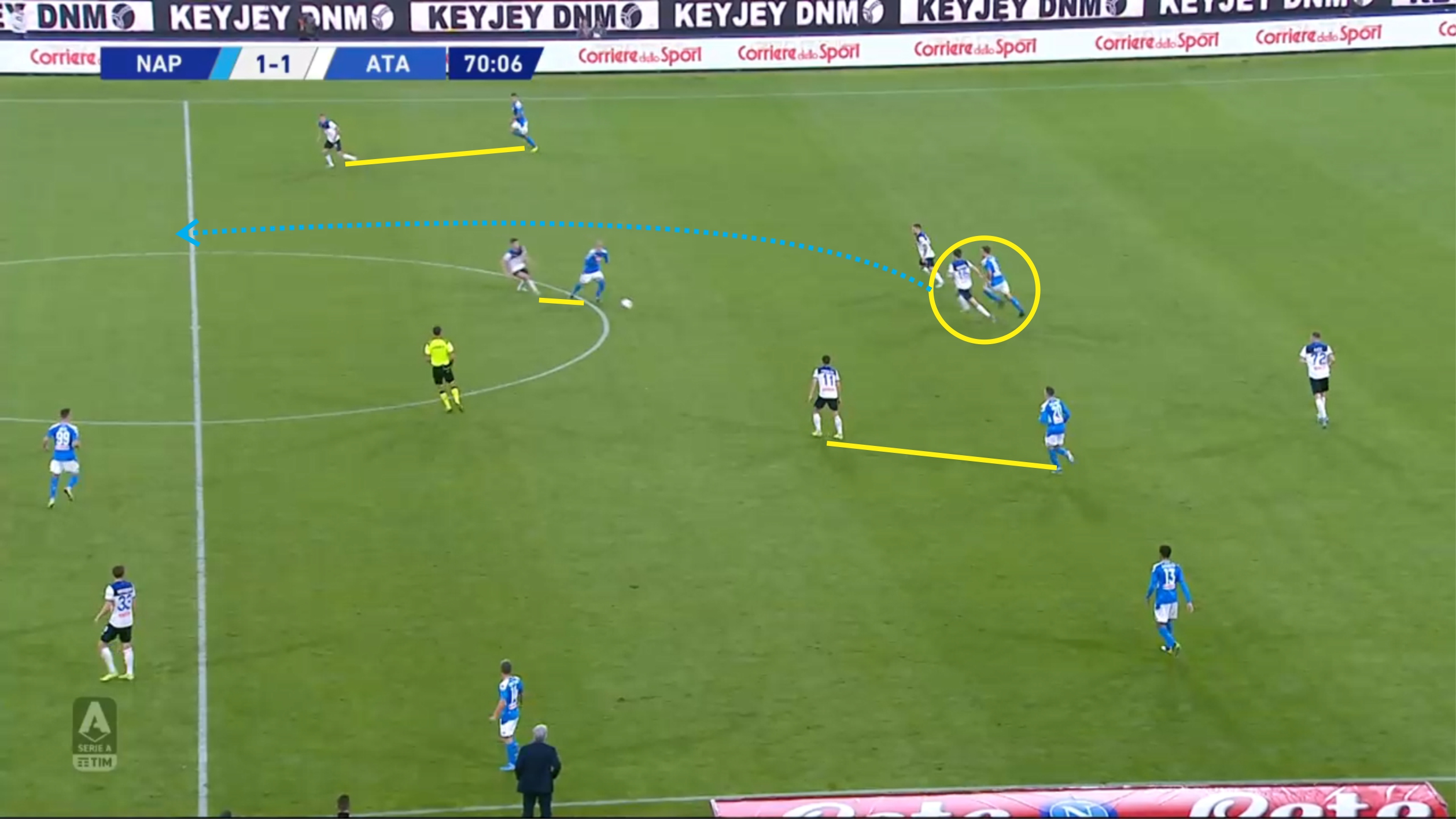 In the picture above, Ruiz passed the ball to Callejón who ventured far from his original position and dropped deep, dragging Gosens with him. Meanwhile, Ruiz immediately tried to exploit the space behind Callejón while being followed by Marten de Roon. 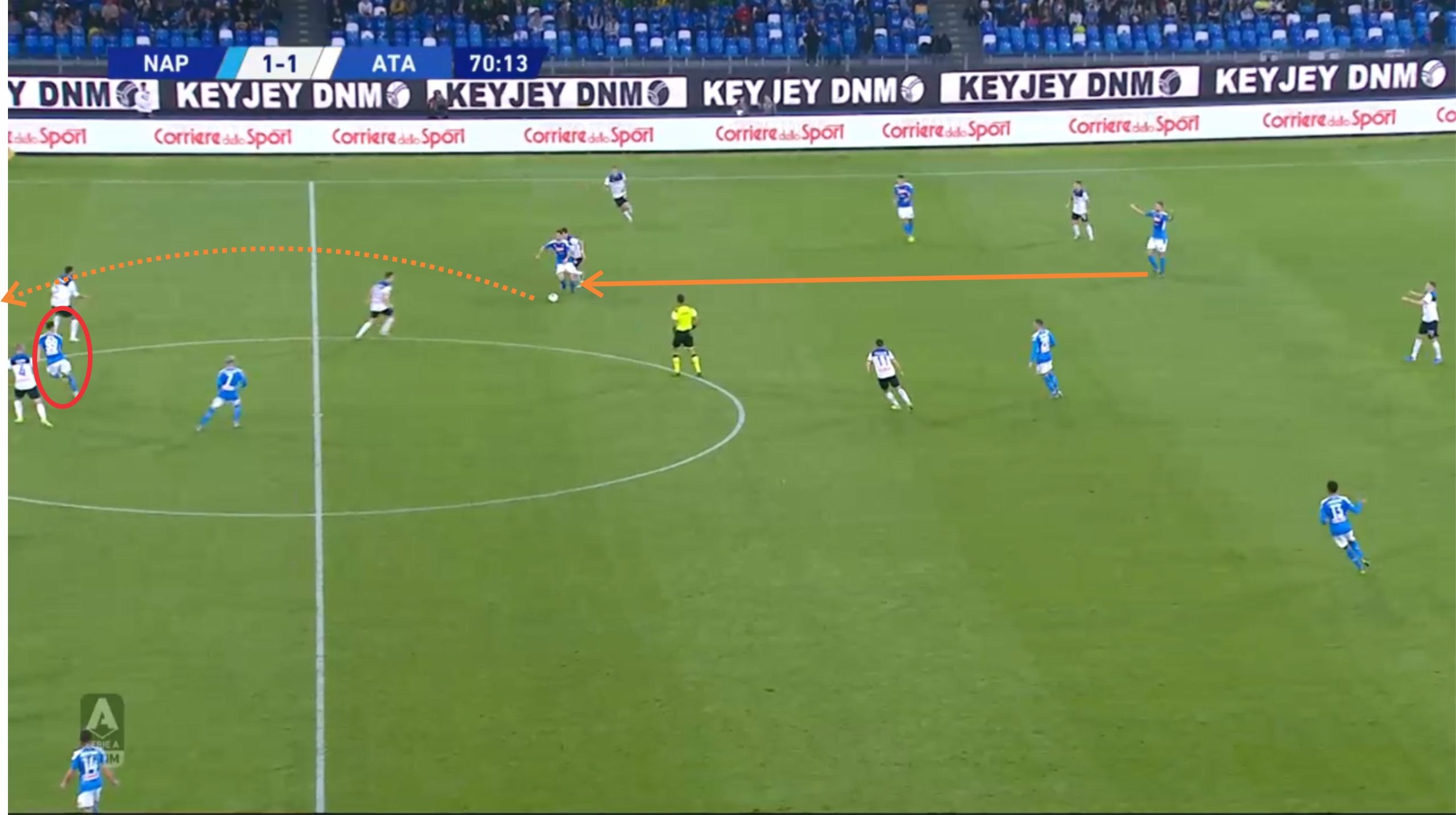 Callejón then played the ball back towards Maksimović who in turn passed the ball forward to the feet of Ruiz. De Roon initially managed to intercept the ball but he lost control of the ball and gave possession away instantaneously to Ruiz. The creative playmaker then showcased his impressive vision and technique by lofting a well-weighted pass in behind the Atalanta defence onto the path of Arkadiusz Milik.

The Polish striker timed his run-in-behind perfectly and latched onto the ball to get it past the goalkeeper before converting the chance into a goal, putting Napoli into the lead.

Napoli actually tried to set up a medium-high defensive block taking the shape of a flat 4-4-2 when Atalanta was in the initial build-up phase. However, when Gasperini’s side managed to escape the pressure and enter Napoli’s half, they’d immediately try to form this block with two banks of four that were narrow vertically as well as horizontally.

Both Milik (not in the frame yet) and Lozano participated quite actively in Napoli’s defence by dropping deep often and actively pressing.

With Napoli setting a deep block when the ball’s in their own half, Atalanta were struggling to break through Napoli’s defence. Particularly through the middle. This was why they mainly tried to attack through the wider area, either through the half-space or through the flanks rather than centrally.

In this picture, De Roon gave the ball towards Gómez who launched the ball towards the space behind Napoli’s backline and onto the path of Iličić who sat in the half-space. However, the ball was easily intercepted by Luperto.

Unlike Napoli who tried to attack their opposition by disorganizing them and exploiting the space, Atalanta tried to unsettle Napoli by creating overloads – usually on the flanks. One of their ways of doing so was by committing one of the three centre-backs forward.

The two strikers also tended to stay wider rather than sit centrally as can be seen in the picture below. 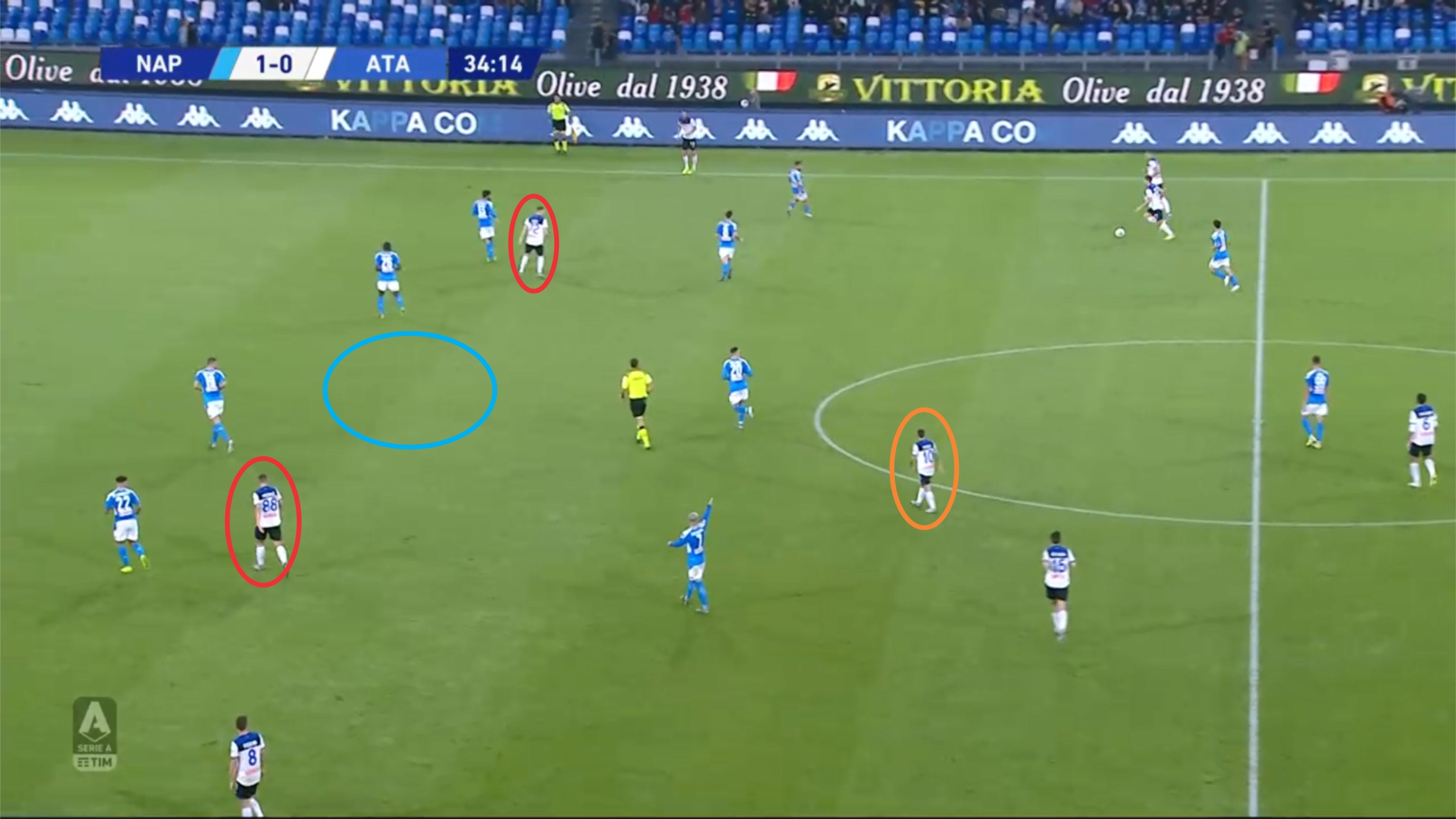 The two central forwards in the red circles tended to sit in the half-space, seemingly attempting to occupy two defenders at once. The wing-backs, meanwhile, sat wide and tried to stretch their opposition by staying close to the touchline. Gómez, in the orange circle, didn’t seem to try to exploit the space in the centre of Napoli’s defence – preferring to stay deep and help the build-up rather than playing in a more advanced area.

This attempt at creating an overload though, seemed to often be dealt with well by I Partenopei with them also trying to match their opposition’s numbers man for man.

As can be seen in the picture above, Napoli managed to match Atalanta’s numbers on their left side. The ball-carrier, Tolói, was effectively isolated in this picture and under pressure from Insigne who forced him to move the ball back and switch the play again.

However, with a bit more creativity and bravery, Atalanta managed to break Napoli’s defence using pretty much the same tactics.

In the picture above, as usual, Tolói would push forward and provide a passing option in the half-space. However, upon seeing no short passing options available, the Brazilian defender drove forward with the ball and successfully dribbled past two Napoli players before laying the ball to Iličić who dropped and dragged Koulibaly out.

Though Napoli initially managed to match Atalanta man for man in terms of numbers, Tolói’s impressive driving run past two players ensured them the numerical superiority upfront. With Iličić also dropping to ask for the ball and drag Koulibaly out also meant that the left side of Napoli’s defence were wide open. 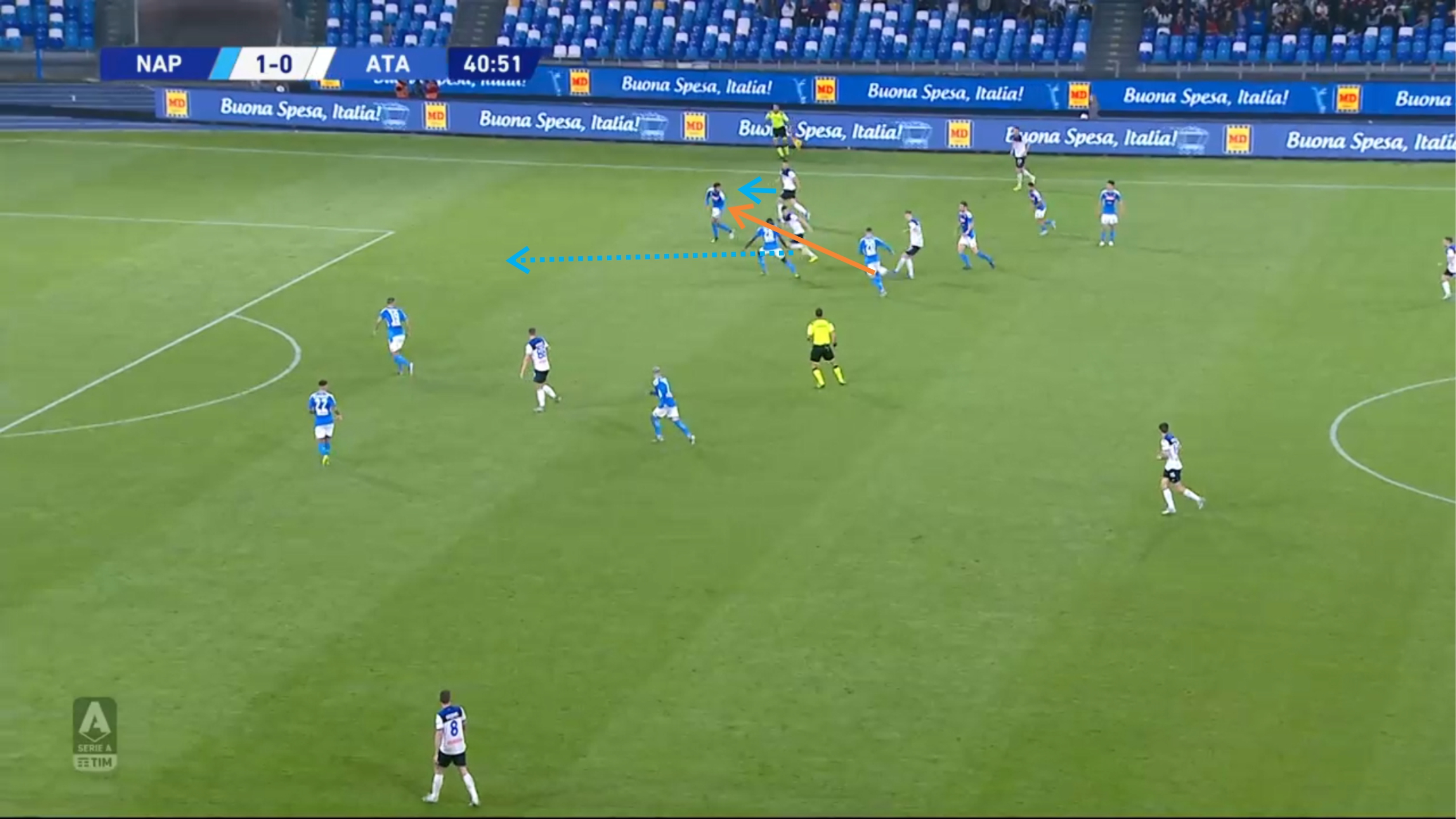 Freuler spotted the space left by Koulibaly and made a run into it. Meanwhile, Iličić returned the ball onto the feet of Tolói who pushed even further forward and made a run behind Luperto’s back. 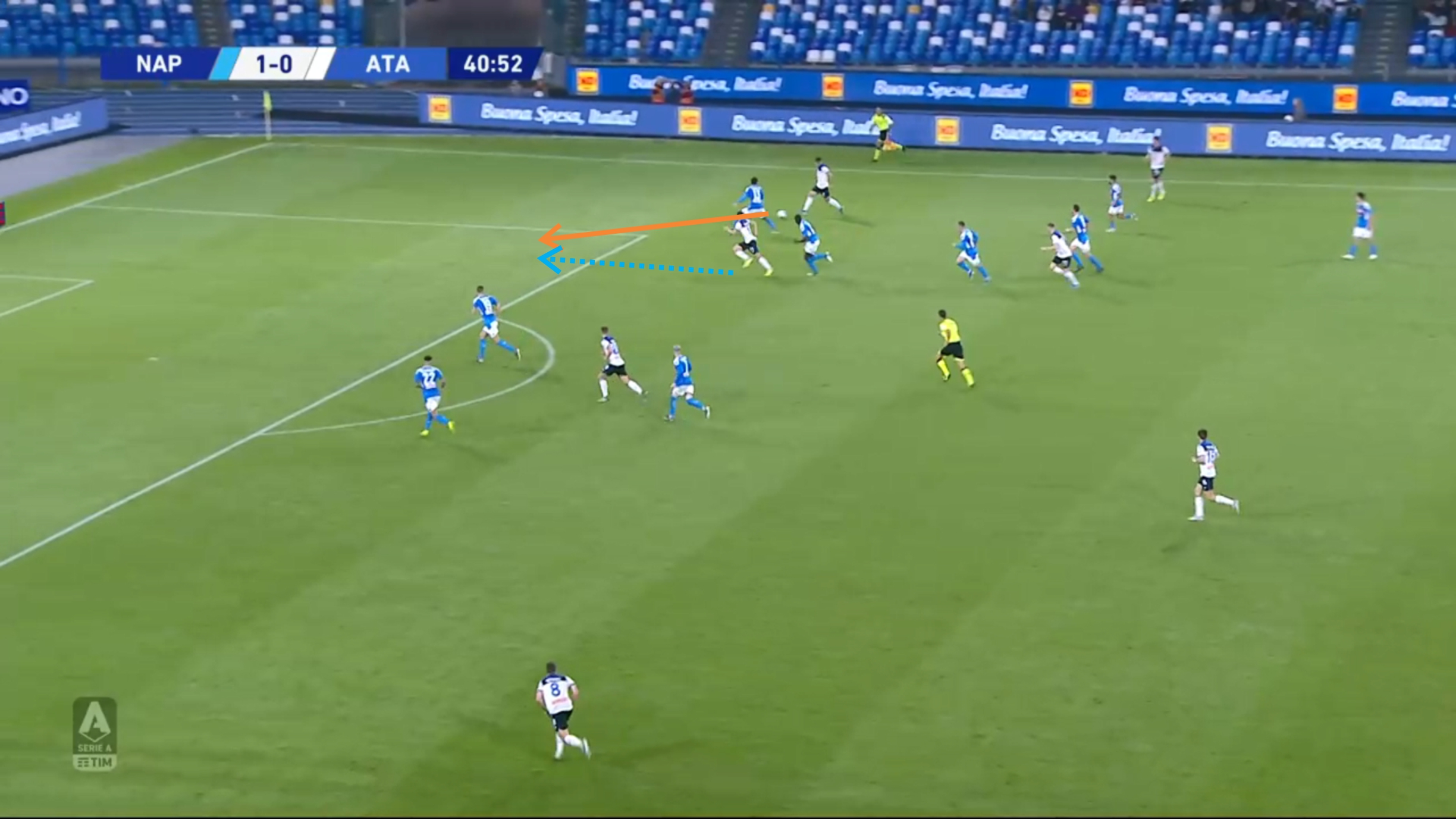 Tolói then delivered a through pass onto the path of Freuler who was already in a one-on-one situation with Meret while Koulibaly was still trying to catch up.

The Swiss midfielder then slotted the ball through the legs of the Italian shot-stopper to equalise the score for Atalanta.

This surely was a well-balanced affair, but Napoli certainly could have won this game. They may not be the clear dominant side on Wednesday, but they were extremely impressive with their movements in Atalanta’s half throughout the game. They managed to disrupt Atalanta’s defensive organisation and broke through the defence although they were lacking in clinicality, and perhaps also fortune.

Atalanta, meanwhile, had a lesser amount of chances than Napoli but were far more clinical.

Though overall, Napoli’s defence was solid – some questions should be raised due to how easy it was for Atalanta to score once they managed to find the gap to breakthrough.