As we reach the third matchday of the Champions League the groups begin to become a little more clear. The opening matchday tends to be chaotic and the second sees teams moving more towards pre-tournament expectations. Going into this match the picture in group E is anything but clear. Napoli started their campaign with an impressive 2-0 victory over Liverpool while RB Salzburg blew past Genk 6-2. In the second matchday, Napoli could only draw with Genk while the Austrian side lost a close game at Liverpool having initially mounted an impressive comeback. This third match then would set the scene for the three return matches still to come.

Napoli, under the experienced Carlo Ancelotti, have now fully transitioned away from the 4-3-3 structure favoured by their former coach Maurizio Sarri. It remained to be seen, however, if this structure would survive the extreme high tempo favoured by the American coach Jesse Marsch and his RB Salzburg side. 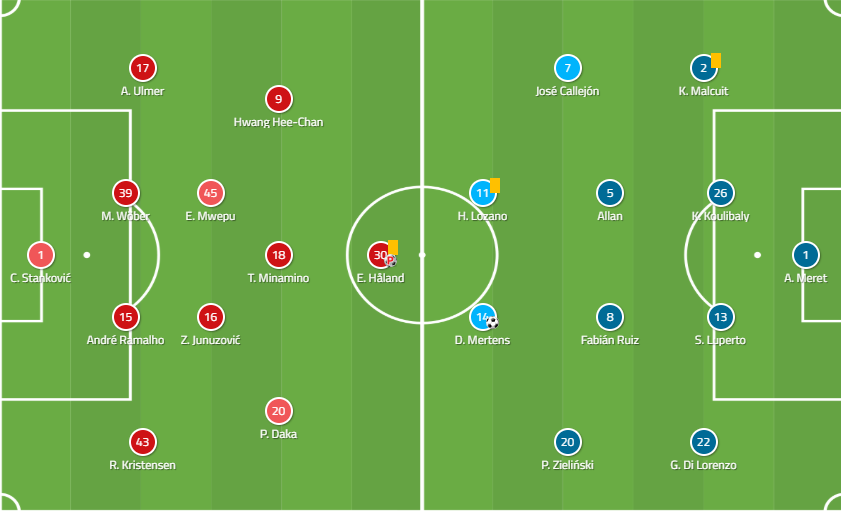 The home side sprung something of a surprise pre-match with their decision to set up in a 4-2-3-1 shape. We have seen them play 4-2-2-2 and 3-5-2 at points this season so far and during the aforementioned match with Liverpool, they switched to a 4-diamond-2. Whilst this was a 4-2-3-1 on paper though it played more like a 4-2-1-3, a subtle but important difference. Patson Daka and Hwang Hee-Chan pushed much higher on the same line as Erling Haaland with Takumi Minamino drifting across the width of the pitch behind them. 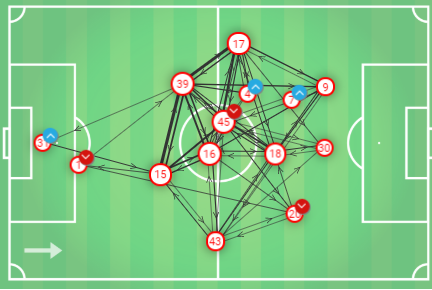 We can see from their pass map that Minamino played an important role in behind the forward players. He continually served as the link through which the quick transitions from the Austrian side flowed. Maximillian Wober and Andre Ramalho played relatively high as the central defenders and consistently looked for progressive passes through the Napoli lines.

Under Carlo Ancelotti, we have seen Napoli utilise a strict 4-4-2 system.  In their earlier match against Liverpool, the willingness of the Italian side to leave their two strikers constantly high was extremely disruptive for Liverpool as they looked to build-up their attack. This means that the midfield was overloaded consistently but such was their quality this overload was not effective. It was interesting to note that the Senegalese defender Kalidou Koulibally switched to the right side of the defensive pair as he normally plays on the left. The use of the Polish international Piotr Zielinski on the left of the midfield also gave us an idea that they may play narrow. 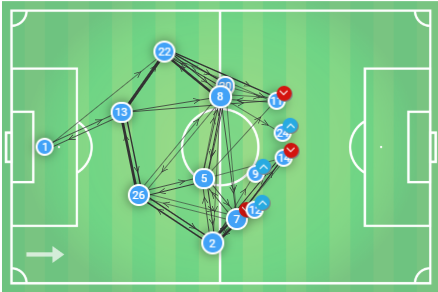 Napoli played with a lower defensive line and a slightly different shape on the left as opposed to the right when they are in possession of the ball. On the left side, the left-back Di Lorenzo retained a deeper position and did not move high. Kevin Malcuit on the right was far more free to move high and join with the attack. Often in possession, we would see Napoli move into a 4-2-4 with the two wide midfielders moving high and narrow.

In this tactical analysis, we will examine the key points and tactics that saw Napoli come out with a 3-2 victory.

Napoli are an exceptionally well-drilled side with each player filling an important tactical role in the overall tactical structure. As mentioned above in the start of our analysis, they adopt a 4-2-4 in possession with Allan and Fabian Ruiz holding position in the midfield to provide a base for the attack. Jose Callejon and Piotr Zielinski would move slightly inside and combine with the two forward players in order to force the Rb Salzburg defensive unit back. The key lay in the ability of the two central midfielders for Napoli to control the match despite being overloaded as Minamino moved back to support the two central midfielders for the Austrian side.

An interesting tactical tweak that further enabled Napoli to control the midfield section was the tendency of Giovanni Di Lorenzo at left-back to stay deeper on the same line as the midfield players. On the opposite side, Kevin Malcuit moved higher and allowed the veteran Spaniard Jose Callejon to move inside. As the RB Salzburg players would then look to press the ball there was always an outlet pass for Napoli to retain possession as Di Lorenzo essentially formed a back three with the two central defenders. Napoli would look to go back before switching to the opposite side and looking to play out through the pressure. 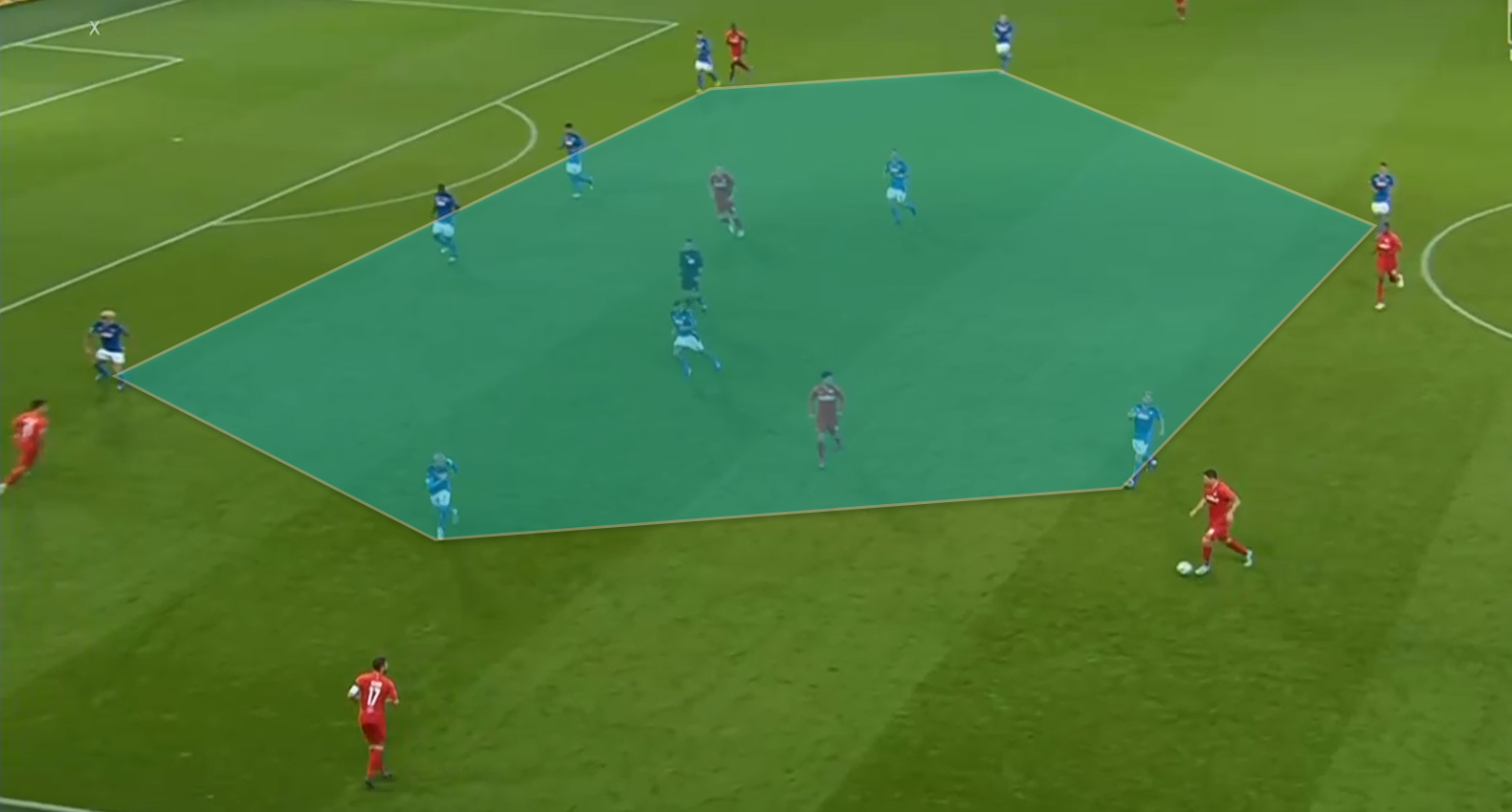 Out of possession, Napoli would not look to press their opponents immediately and they would instead adopt a more secure defensive block in their 4-4-2 shape. They would drop into a compact shape and wait until RB Salzburg had progressed to the edge of the final third before pressing with any intent. This is why the two central defenders for the home side enjoyed significant possession. As the match progressed there were points in which RB Salzburg were able to progress past this defensive block but Napoli continued to defend in their rigid style.

Whilst the 4-4-2 in the defensive phase from Napoli was compact there were still spaces between the lines of defence, midfield and attack that the home side were able to exploit. So far this season, under Jesse Marsch, RB Salzburg have impressed with their capacity to move the ball quickly and vertically through the thirds of the field. All of their forward players are extremely technical and they attack spaces extremely well in looking to overload their opponents.

Here we see this form of interplay in action. Neither of the two central midfielders for the home side looked to move high to join the attacking phase and instead they held their shape to provide a platform for the attack. Here we see the ball being shifted back to Junuzović and as soon as the midfielder takes possession of the ball we see the Napoli midfield shift to focus on the ball. This allows the Japanese attacker Minamino to move on the blind side of the midfield into the space highlighted. It is then simply for the ball to be played through to access this space.

We see another example of this interplay here as a chance is created for Erling Haaland running in behind the Napoli defence. In their standard block, there is a large area of space between the midfield and the defence. As the first pas is played from Wober it bypasses the opposition into the feet of Hwang on the highest line for RB Salzburg. As soon as the first pass is played Minamino (again) makes the run to the highest line between the two Napoli players. The ball is then set out to him first time and again he passes first time to allow Haaland to break the defensive line and advance on goal.

In many ways, the RB Salzburg of Marsch represents a less polished version of Liverpool under Jurgen Klopp. This means that out of possession they will press quickly to disrupt the opposition and look to win the ball back as close to the opposition goal as possible. We saw evidence of this again in this match against Napoli although as the match wore on the Italians began to find ways to bypass the press and create more opportunities for their attacking players.

In the early moments of the match and for the majority of the first-half RB Salzburg pressed well and retained their shape and depth whilst doing so. Here we see Patson Daka and Takumi Minamino pressing as the ball is played infield by Napoli under pressure. Once again the Japanese attacker was the key player for the Austrian side as he led the press and shifted across to prevent the Italian side from enjoying easy possession. As the match progressed, however, we saw Napoli start to stretch the Austrian side breaking the press with more ease.

We see these issues in the example above. The front four for Rb Salzburg are pressing high to prevent the ball progression from Napoli. There is too big of a gap between the pressing players and the rest of the defensive structure as Napoli are able to exploit this to play around. the pass is played vertically into the feet of Zielinski and it can then be switched back across to the opposite side where Malcuit is able to collect possession and move immediately into a high position. From these positions, Napoli were able to dominate the game a little more.

With no designated defensive midfielder for RB Salzburg, there was space that could be exploited by Napoli between the lines. The Italian side achieved this by using their two attacking players to split with one staying high and one dropping off. This created a 1-1 attacking structure with the central defenders for the Austrian side having to choose whether to step out with the forward or retain their defensive position.

We see this in action here with the three midfielders for RB Salzburg positioned poorly with only the ball as their reference. This meant that the passing lane to the side of them was not covered. A simple through pass could then be played to allow the forward to drop off and pick up possession of the ball. This was a consistent point of threat for the home side.

We see intelligent movement from the away side again here with Jose Callejon originally moving inside from his wide right position to collect possession of the ball. This empties the space in the wide-area as Kevin Malcuit moves high to occupy that space. On the far side we see Piotr Zielinski moving high to occupy the space there and stretch the defensive structure out. Once again we also see that the two forward players are slightly staggered with the second forward in space looking to attack the space should the ball progress to the edge of the penalty area.

On the balance of play, RB Salzburg will feel as though they should have come away from this match with a point. As with the match against Liverpool, we saw Napoli show themselves to be an intelligent and highly professional side with the capacity of playing deep and negating threat but also the attacking threat to make an impact at the other end.

We are not three matches into Group E but nothing at all is certain. With Liverpool still favourites to go through you would not like to bet against either of these two sides being the team that takes the other space in the knockout rounds.