After a stunning run of form, Lazio’s winning streak was finally broken by the hands of Roma at the Stadio Olimpico. Lazio stumbled at the first opportunity they had to take the second spot away from Inter in Serie A whilst the draw kept Roma in fourth, just ahead of Atalanta.

Despite being armed with plenty of attacking talent, Lazio severely struggled to impose themselves on their Roman opponents in this game and in the end, appeared fortunate to salvage a 1-1 draw away from home. Roma on the other hand, having been on a mixed run of recent form, looked rejuvenated and frankly awesome in this game.

Read our tactical analysis of how Roma dominated a Lazio side that had, up until this point, threatened to insert themselves into this season’s title race. We’ll examine just how Roma’s tactics reduced a recently free-scoring Lazio to a measly six shots on goal and our analysis will depict exactly how Roma asserted themselves over their opponents in such a controlling fashion.

Joaquin Correa returned to the Lazio side in exchange for Felipe Caicedo as Simone Inzaghi remained true to the 3-5-2 formation that had served them so well up to this point. Lazio would be hoping that the Argentine’s reintroduction to the side would continue to fuel Ciro Immobile up front, who is leading the race for Serie A’s top goalscorer, having gone into this game with a record of 23 goals in 19 games.

In the absence of Nicolò Zaniolo after his devastating ACL injury, Lorenzo Pellegrini lined up behind Edin Džeko on paper, however he played more like a traditional ‘8’ throughout the game. Due to this, despite Roma being depicted as lining up in a 4-2-3-1 formation, it played out more similarly to a modern variant of the 4-3-3.

With both sides not adding to their squads during the winter transfer window, there were no debuts to look forward to in this fixture. 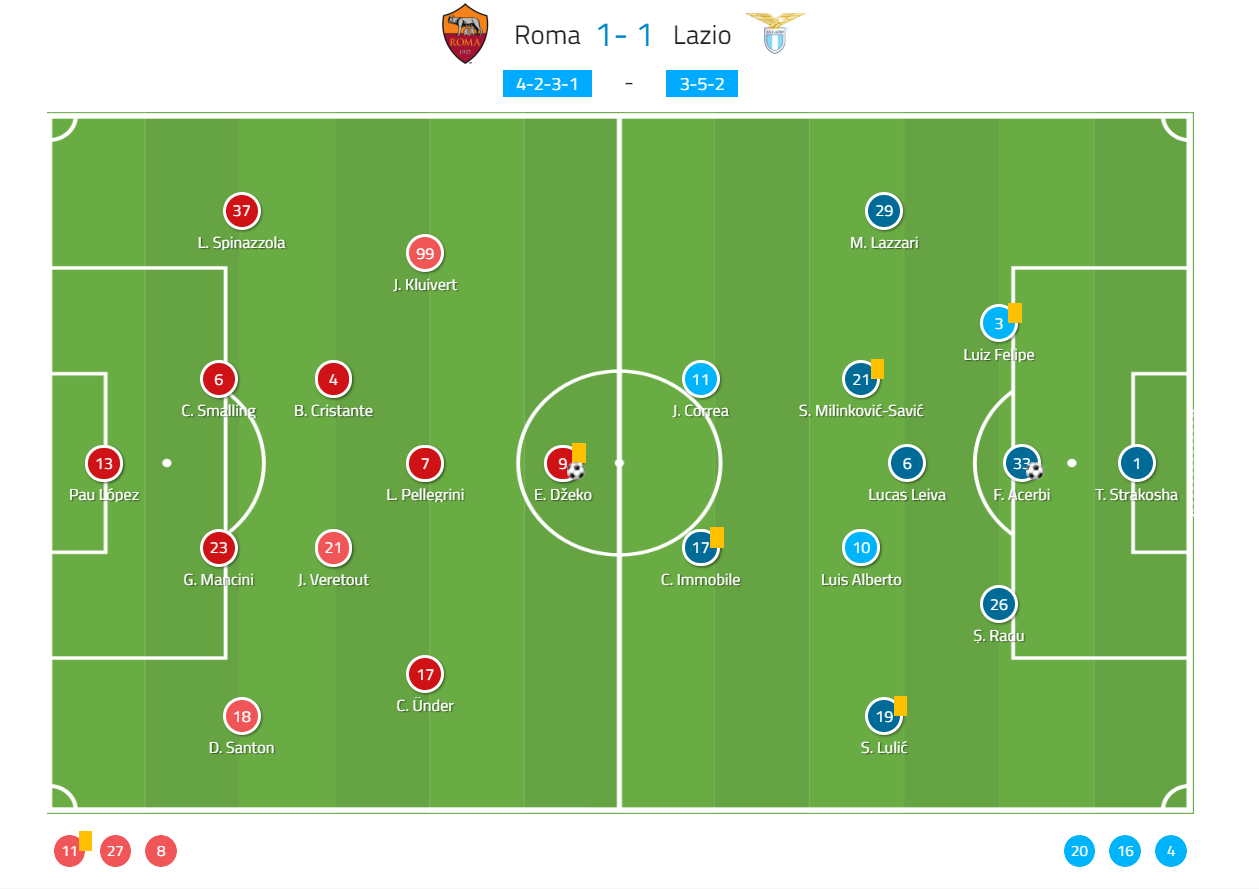 The one concern for Lazio in their current formation has centred around how they defend themselves down the flanks. Previously, they combatted this issue by shifting one of the wider midfielders out to the sides in order to pressure the opposition full-back in possession.

To overcome this defensive solution, Roma committed their fullbacks forward in both under and overlapping scenarios to pin both Lazio’s wingbacks and potentially their wide central midfield to the backline. This opened up great deals of space in the centre of the field for Roma’s midfield to dictate the flow and tempo of the game.

Cengiz Ünder enjoyed a great game against Senad Lulić and constantly had the beating of the Bosnian wingback, the Turkish winger managing to finish the game having completed 13 dribbles. This compelled the entire left side of the Lazio team to compensate and back off the rest of the Roma midfield which only further compounded Roma’s superiority.

The home side always ensured they had men positioned high and wide down the flanks, keeping Lazio’s wingbacks honest with their positioning and allowing their own fullbacks to support their teammates in overloading Lazio’s midfield line. Not only this, but Roma utilised classic tactics popularised by Pep Guardiola at Barcelona to help further overload Lazio in the centre of the pitch.

Lorenzo Cristeg would drop in between his centre-backs, abandoning his midfield position in order to adopt a place amongst the backline so as to allow for the progression of his team’s fullbacks. Similarly, further forward for the Romans, Džeko was often found dropping off the Lazio centre-backs to find more opportunities to receive the ball to feet. This would also help to give Roma a foothold of possession in between Lazio’s defence and midfield which would afford the time for the likes of Veretout and Pellegrini to make bursting runs forward into the final third of the pitch.

This helped Roma create plenty of good scoring opportunities in central areas of Lazio’s penalty area. Because of the influence Roma had in the final third of the pitch, the home team were easily able to overload the Lazio defensive block and attack their opponent’s box in large numbers and create a variety of opportunities for their attackers to exploit space within Lazio’s penalty area.

The presence this created for Roma in Lazio’s half of the pitch gave them control of the game due to the number of passing options they had in attack as well as stifling the play of Correa and Luis Alberto. This is because as Roma circulated the ball in and around Lazio’s half, the entire away side was pinned deeper and deeper within their own third and this meant Lazio struggled to create any meaningful attacks as Ciro Immobile was their only outlet to escape the pressure they were put under by their opponents.

This was reflected in the final output of the team’s attack, as aforementioned, Lazio only managed six total efforts on Roma’s goal during the game and no member of Lazio’s starting eleven could muster more than just a solitary effort on goal. Since the likes of Correa, Alberto and Sergej Milinković-Savić didn’t have as many opportunities as normal to break into the opposition’s box and influence the game in the way Inzaghi would’ve wanted.

Not being able to enjoy sustained periods of possession in Roma’s half, this meant Lazio were not able to create dangerous overloads in the final third which meant none of their attackers were able to find space and time on the ball on a consistent basis. This meant that neither Alberto or Correa could work the space necessary for them to extend their creative prowess on the game.

With no overloads in the opposition’s half, Lazio failed to get the better of the Roma backline and were often ill-equipped to ever put together a lethal attack or effectively counter-press their opponents in order to create potentially dangerous attacking opportunities on a turnover of possession. For this reason, Lazio’s attack was rather one-sided and predictable and had it not been for a calamitous mistake from Pau Lopez, Roma would’ve walked their way to a clean sheet in this game.

Despite Roma’s superiority, the game was ultimately decided by two meek displays from both team’s respective keepers, who will both have to take responsibility for the goals their teams conceded. Ignoring the fortune in Roma’s goal, it was entirely deserved as they outshot their opponents 24 to six in a potent outing for their forward players.

Paulo Fonseca will be delighted by his team’s performance though and will feel like they should’ve earned more than they did from this game. In contrast, Inzaghi will be alarmed at just how easy it was for Roma’s tactics to almost completely nullify his side’s most influential attackers. WyScout had the game end with an xG for Roma of 3.88 vs Lazio’s 1.07 which highlights just how much better Roma were on the day compared to their opponents.