Premier League 2021/22: Why it could have been worse for Man City in their Man United win – tactical analysis

The second Manchester derby of this Premier League season was played on Sunday with Manchester City hosting Manchester United at the Etihad Stadium. The result, as many expected, was a Man City win and the hosts had a clear margin over their neighbours. It would be a very easy task to address how good were City, including how they dominated the game. We want to give this game another angle of analysis by demonstrating some transitions scenes of the game. As we all knew, this could be City’s biggest weakness and they could suffer.

Ralf Rangnick took references from Antonio Conte’s Tottenham to set up his team. In the counter-attacks, there were similarities in terms of how they attacked the rest defence, leading to an equalizer but the same set up, unfortunately, also gave Kevin De Bruyne the second goal. This analysis will explain the transitions tactics of Man United in the derby.

City were missing some first-team players due to injuries. Both centre-backs, Rúben Dias and Nathan Aké could not play, so John Stones and Aymeric Laporte partnered in the defence, with João Cancelo and Kyle Walker as the full-backs. This time, Bernardo Silva returned to the midfield to join Rodrigo Hernández and De Bruyne, as Riyad Mahrez and Jack Grealish started as wingers, and so Phil Foden could play as the false-9 again.

In this game, United opted for a 4-4-2 formation, they were without Cristiano Ronaldo and Raphaël Varane, so Rangnick had to adapt. Victor Lindelöf and Harry Maguire started together as the centre-backs. In the midfield, Scott McTominay returned from injury and joined Fred as the 6s, with Anthony Elanga and Jadon Sancho as the wingers, Marcus Rashford came on as a substitute. Two midfielders, Paul Pogba and Bruno Fernandes were the strikers on paper but the team should be driven by the principles of plays.

Lately, when City have the ball, the rest defence structure consisted of mainly a 3-1 shape, the right-back was more playing infield as the third centre-back and the left-back was a bit higher to attack in the wide spaces. This was also the same in the derby as Walker came in to join Stones and Laporte, while Cancelo was higher in the back four.

In game 26 which City lost to Tottenham, the guests had a great counter-attacking scheme to create chances in transitions – City were unable to find a solution throughout the game. In the first moment, Tottenham always had Harry Kane, the striker, dropping to receive in spaces around Rodri. Since City only had one man in the second line, it was easy to find lateral space around the holding midfielder. When Kane dropped, City centre-backs had difficulties in the forechecking because the angle of receive and timing of movement could avoid this action, so Pep Guardiola’s men could not win the ball back in the first action.

Meanwhile, the wingers, Dejan Kulusevski and Heung-min Son would join the attack by making forward runs, so they were the third man options for Kane. Both were pacey players and they had the potential to arrive earlier than the City full-backs. Note that Son’s run is always through the gap between Walker and Dias, that could be a big threat when Dias oriented himself towards the striker, so that gap was stretched. 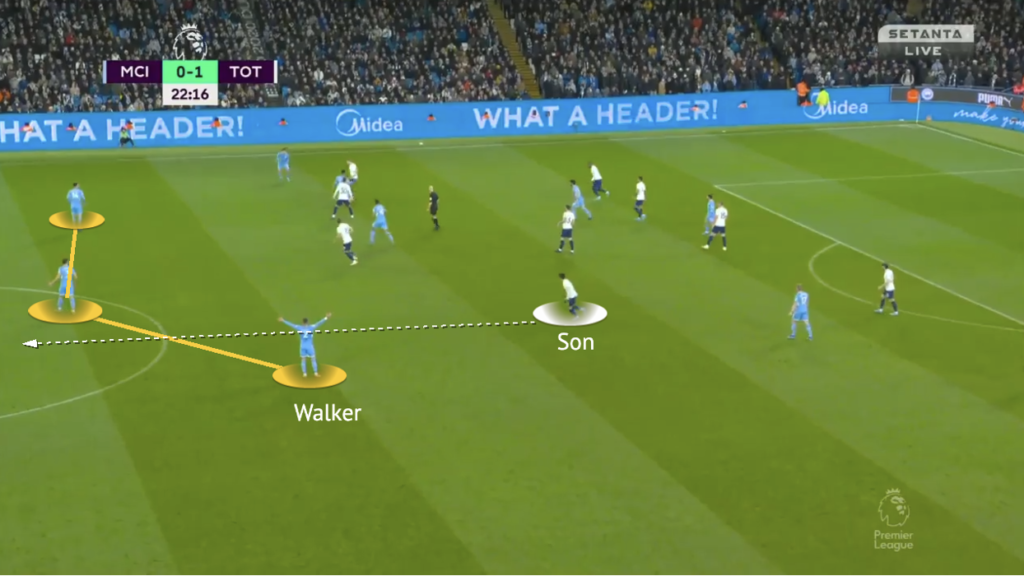 Here, the above image was an example of how Tottenham played in the transitions. The ball was in the left half-space, because Kane was so deep, none of the City centre-backs stepped up to close him, as they let Rodri deal with that zonally. Intriguingly, reports mentioned Pep’s troops even had an open discussion in the locker room after the game to discuss whether they should close Kane when he dropped. But, we wanted to show the winger’s movement with this example.

You could see when Walker was complaining to the referee by waving his hands, Son, was already starting the run all the way between Dias and Walker.  Even though the starting position of the left-winger is deeper, since he started the run earlier, and already facing the goal, he could arrive earlier than the defender. 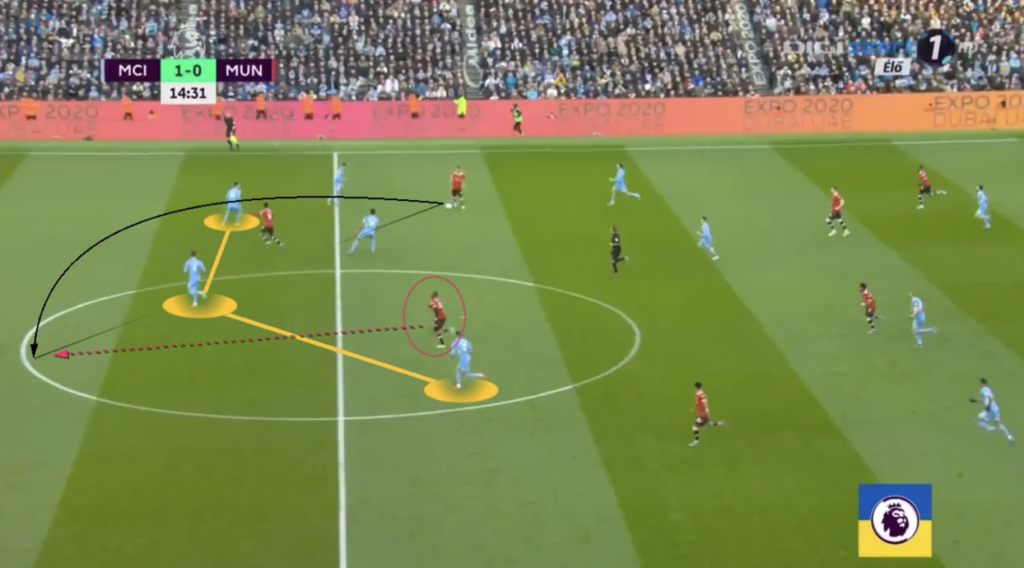 Here, we could see United doing something similar on one occasion in the derby although their method was a bit different. They did that by diverse timing of runs, which means using one player to make an early run to attack depth, that past the defence and force the defenders, breaking the offside trap. Then, the second player, Pogba, attacked the same gap as Son did and even though he was not as quick as the Korean winger, what determined his availability to receive was the timing of movement.

Since United were attacking on the right side, City defenders inevitably kept their eyes on Fernandes, so they showed the blindside to Pogba. In reality, the pass did not happen because Grealish came back to stop the Portuguese international with a foul. But if it did, you could imagine what Pogba could do in that space with Elanga arriving from the right half-space.

Of course, Tottenham and United were different teams, the setup would not look 100% the same, but there were similar structures as Rangnick targeted the same part of the rest defence to attack. City had Cancelo higher than Walker in possession to attack, the rest defence structure was also a 3-1 despite that was a 4-2-3-1 on paper, but Silva was rather flexible than staying in the same space.

When City attacked on the left side, and there must be chances for United to recover possession there. Then, the way they set up in transition was dropping one of the strikers in front of Laporte, preferably that should be Pogba, who had better physicality to shield the ball. The Red Devils wanted to exploit Laporte because he was not good at defending spaces in front, when he came out, spaces were exposed behind. To force City to move, another player, mostly Fernandes, could move into the blue zone, which inevitably forced Stones to step wider, further isolating Walker on the other side of the pitch. Compared to Son, the run of Sancho was on the outside of the right-back, but it could be flexible depending on the circumstances.

United, because of the close proximity when defending the wide spaces, also utilized this structure to reach Pogba and Fernandes in transitions. For example, Pogba could use Elanga or Fred as the third man, so the third man could loft the ball to the blue space. Without a defender pressing from behind, Fernandes could turn and face the opposition goal, then find Sancho on the other side. Or even, better, Pogba could directly find Sancho without connecting Bruno first. Then, it is about individual quality in big spaces behind the last line. 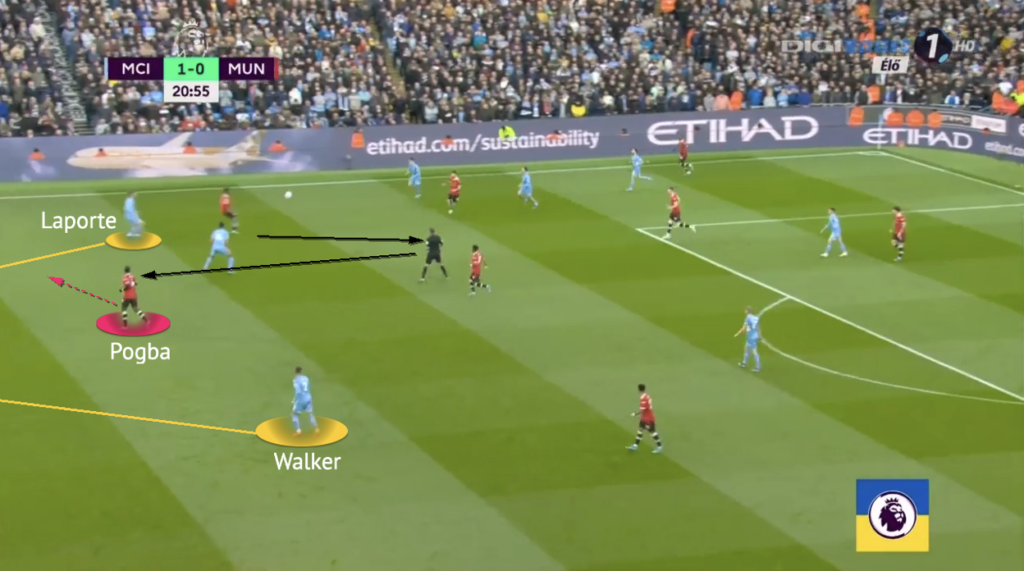 We can see how the above structure resulted in the equalizer. On this occasion, United win the ball back on the right side, and they already imbalanced the rest defence structure of City. When Elanga received the first pass, which was always a vertical one as the guests wanted to start a counter-attack as quick as possible, Laporte stepped up but he was too far to access the Swedish youngster.

Even though Elanga could not turn, he managed to find Fred as the third man, who could pass the ball to Pogba in the blue zone. Rodri could not counter-press Fred instantly because the first action of United brought him to Elanga, so Fred remained free. Sancho was initially deep but then you could see how quick he joined the counter-attack. 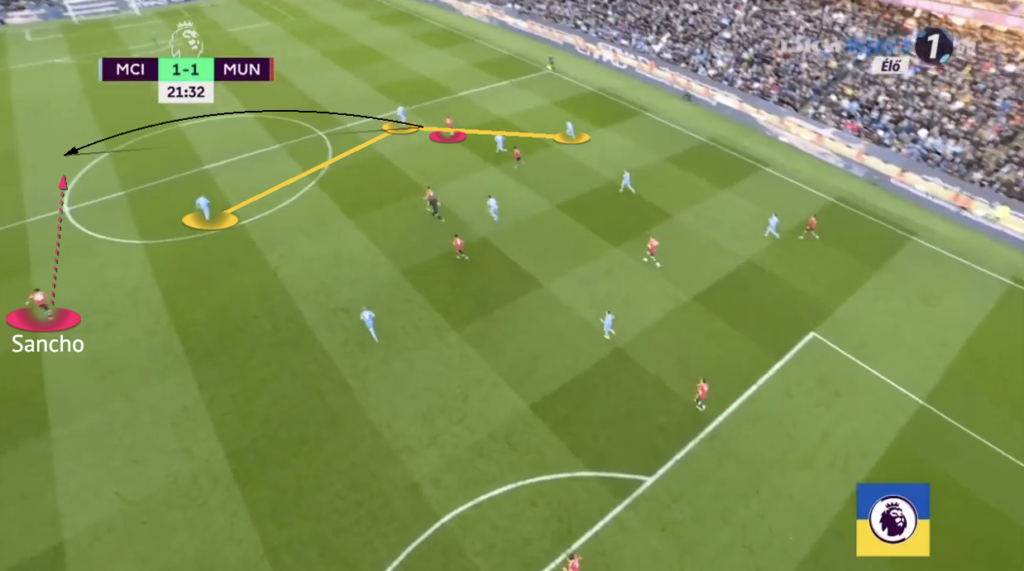 This camera angle shows the bigger picture of the goal, when Pogba received, the rest defence structure of City was imbalanced as Stones could not close him down in that 1v1 situation. Laporte was largely irrelevant because Elanga took him away already. Walker, was clearly isolated on the far side and he must move inner to close the gap to defend runners. This time, Pogba did very well to reach the winger and sent him in spaces behind. With the late runners of Fernandes, Sancho demonstrated his quality and scored. 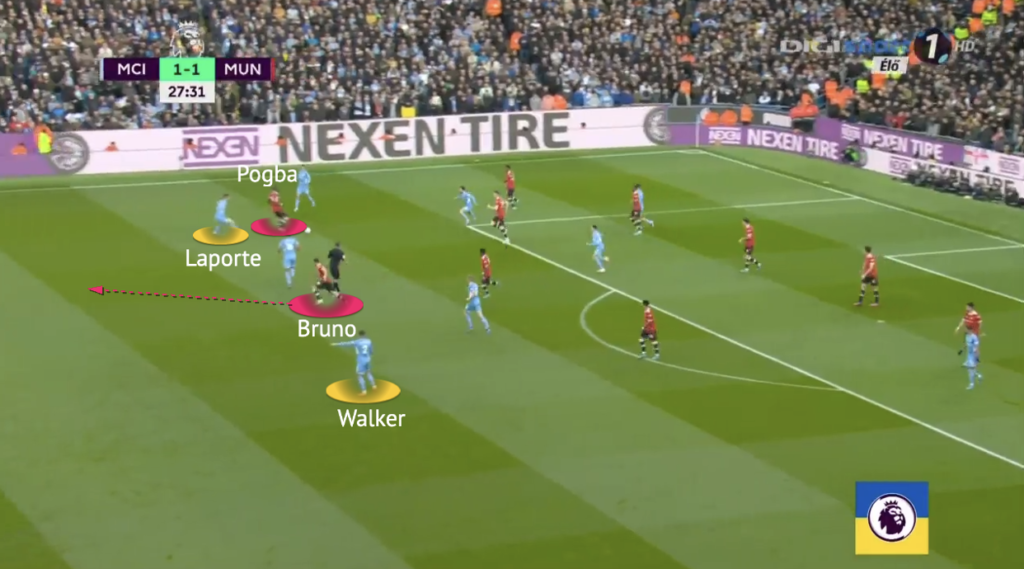 But that same approach did not bring to another success, unfortunately, they conceded the second goal from there. The above image shows the scenario before that goal, it was almost the same, this time was Pogba who moved to spaces in front of Laporte. They created the same situation to imbalance the City rest defence. As Fernandes travelled to spaces behind Laporte, that was a 1v1 on Stones and Walker isolation again, but unfortunately, the ball hit Cancelo’s head when it was played, and the poor defending afterwards led to the other goal. 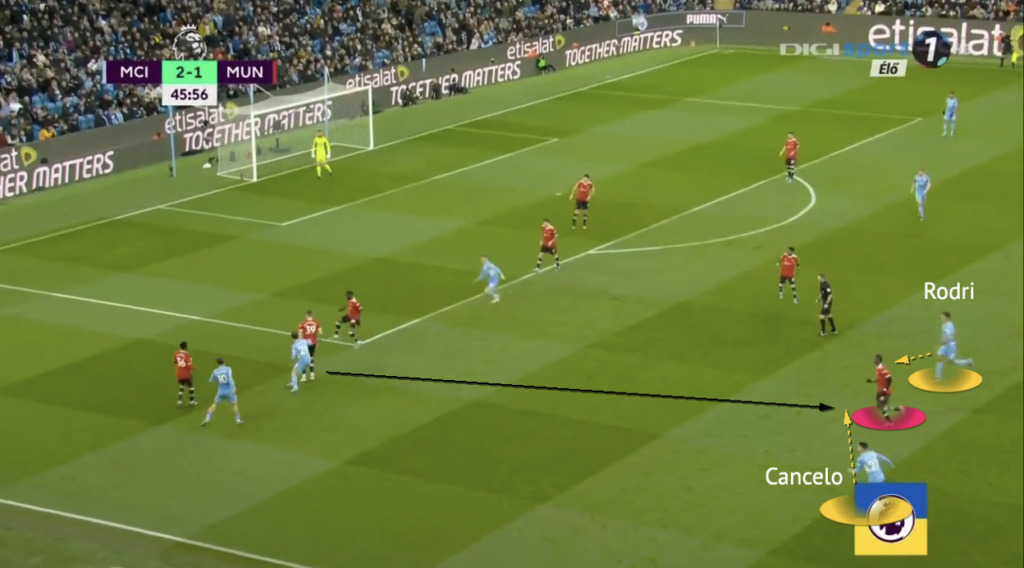 And City did not let the same structure happen for long, probably during the water break, when Pep had conversations with Laporte, Cancelo, and Rodri, they sorted something out. After that, the rest defence structure did not change greatly, but the way they counter-press was a bit different. Laporte no longer stepped up so early as Cancelo and Rodri would be both attacking the first receiver of United, and they won the ball back in those situations a lot in the second half. 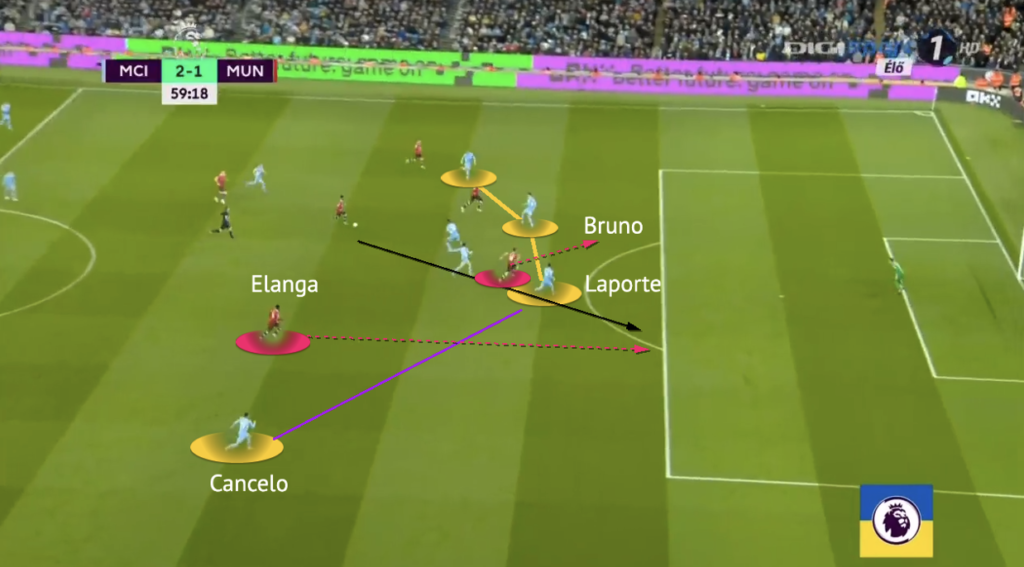 In the second half, despite the initial way of counter-attacking did not work, United might still be able to exploit the rest defence structure of City. For a couple of times, when Cancelo was high, the gap between Laporte and him was too big in transitions. United always wanted to hit the ball into that channel but the execution was mostly disappointing. As shown in the above image, Fernandes’ run took away Laporte and the purple gap was where they wanted to exploit.

But as Pep said, he knew the limits of human beings. The defender was not Flash so he could not be high up on the pitch and instantly be there in transitions, what mattered and deserved credits were the attitude and urgency of Cancelo to track back in those situations. The City left-back was on time to clear the danger before United pose real threats to Ederson.

It is clear that City were inarguably the better side in the derby, they fully deserved the win, especially in the second half, they were backed to their highest standard, but it was also cliché to address how good were City in possession without going into details. Hence, this tactical analysis mainly showed the tactics of Rangnick in transitions, at least even from this loss, there were good information for the German interim coach to take. The struggles of United was an extremely complex issue, and they will not be solved in one game, or one season – let’s see what they could achieve with Rangnick under the current condition this season.