The highest-scoring fixture in Premier League history lived up to its reputation, Liverpool came away as worthy winners at 3-1 against an in-form Arsenal. Both Jürgen Klopp and Mikel Arteta will feel their sides should have converted more from open play; however, the final score is perhaps a fair reflection of both sides performances on the day.

The tactical analysis tells the story of the game from a tactical standpoint across the 90+ minutes. The analysis covers the most prominent aspects of both sides performance, looking at how both managers set up to get success, including where Arsenal might improve defensively going forward.

Liverpool would build from the back against a high-press with width and depth, either playing short or long passes forward, depending on the positioning of Arsenal’s wing-backs. The long passes were mostly diagonal, such as Virgil Van Dijk on the left side playing across to the wide right to Mohammad Salah.

Long passes, either vertical or horizontal, were quickly met with support and forward runs. In the final third, the Reds would commit 8/9 players, all of which were capable of getting their name on the scoresheet from open play. During wide attacks, the forwards and full-backs could unlock the Arsenal defence with in-or-out swinging crosses, short cut-back crosses and penetrating runs from the half-space.

All Liverpool players were comfortable to play and receive the ball close to pressure, as well as being able to change the point of attack from one side to the other without a moments notice, to penetrate and score. In the transition to attack, it depended on the moment and the position on the field, however, often Liverpool would look to exploit a disjointed Arsenal defence at pace, direct and centrally.

In the defensive phase, Liverpool was equally and consistently intense, defending in both halves. Particularly in the transition to defend, Liverpool players would sometimes veer away from their positions, instead, identifying opportunities to isolate the ball carrier and frantically engaging the press to win the ball back.

Arsenal looked to build through the thirds against the rigorous high press from the Reds. Both wing-backs combined in every third to create overloads and provide crosses. Centre-forward Alexandre Lacazette would drop deep in the build-up phase to help progress the attack while remaining a focal point for crosses in the final third.

Arsenal deliberately looked to quickly exploit the spaces left vacant by the advanced Liverpool full-backs in the transition to attack. Arsenal played a high-risk-high-reward system by keeping three players forward in the defensive phase so they could counter-attack quickly with numerical superiority.

In the defensive phase, Arsenal offered five to seven players to the defensive unit depending of course on midfield runners from Liverpool. Forming a low block sitting just inside their box during Liverpool’s prominent attacks. In the transition to defend, Arsenal’s priority was first to deny forward passing opportunities rather than immediately pressing the passing options.

When analysing some of Europe’s top teams, you can narrow down the aspects of their playing style to identify a set of principles and sub-principles in their attack. However, with Liverpool, it is not that simple, with ten outfield players that can create and score from open play their potential is so wide-ranging.

Yes, Liverpool certainly would have identified ways to get at Arsenal however you could get a sense that the players applied a lot of common sense and critical thinking when opting to go long, short, central, wide and when to switch. Decisions that are right at the moment; however, do not seem to occur again. Perhaps a basis of decision making that considers the position of the Arsenal players and the moment of the game to assess opportunities.

Below are but two aspects of the Liverpool attack that either we saw quite frequently or that captures their principles in the attacking phase.

Playing long from the back. 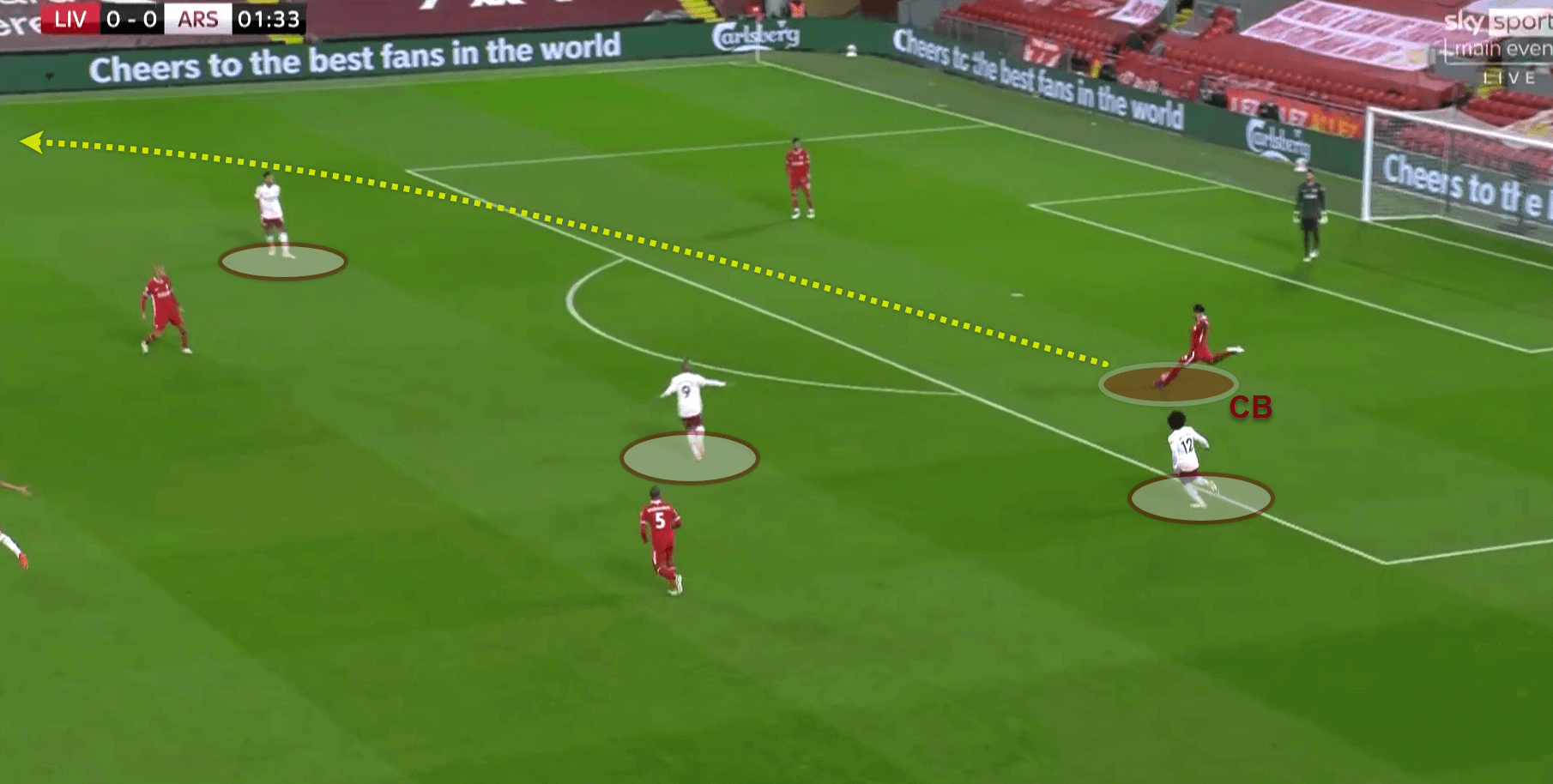 Above we see Van Dijk is about to play a long-diagonal pass out to the right flank for teammate Salah. After a brief spell of horizontal passes, the Dutchman opens his body to play a long accurate pass over the Arsenal forwards. 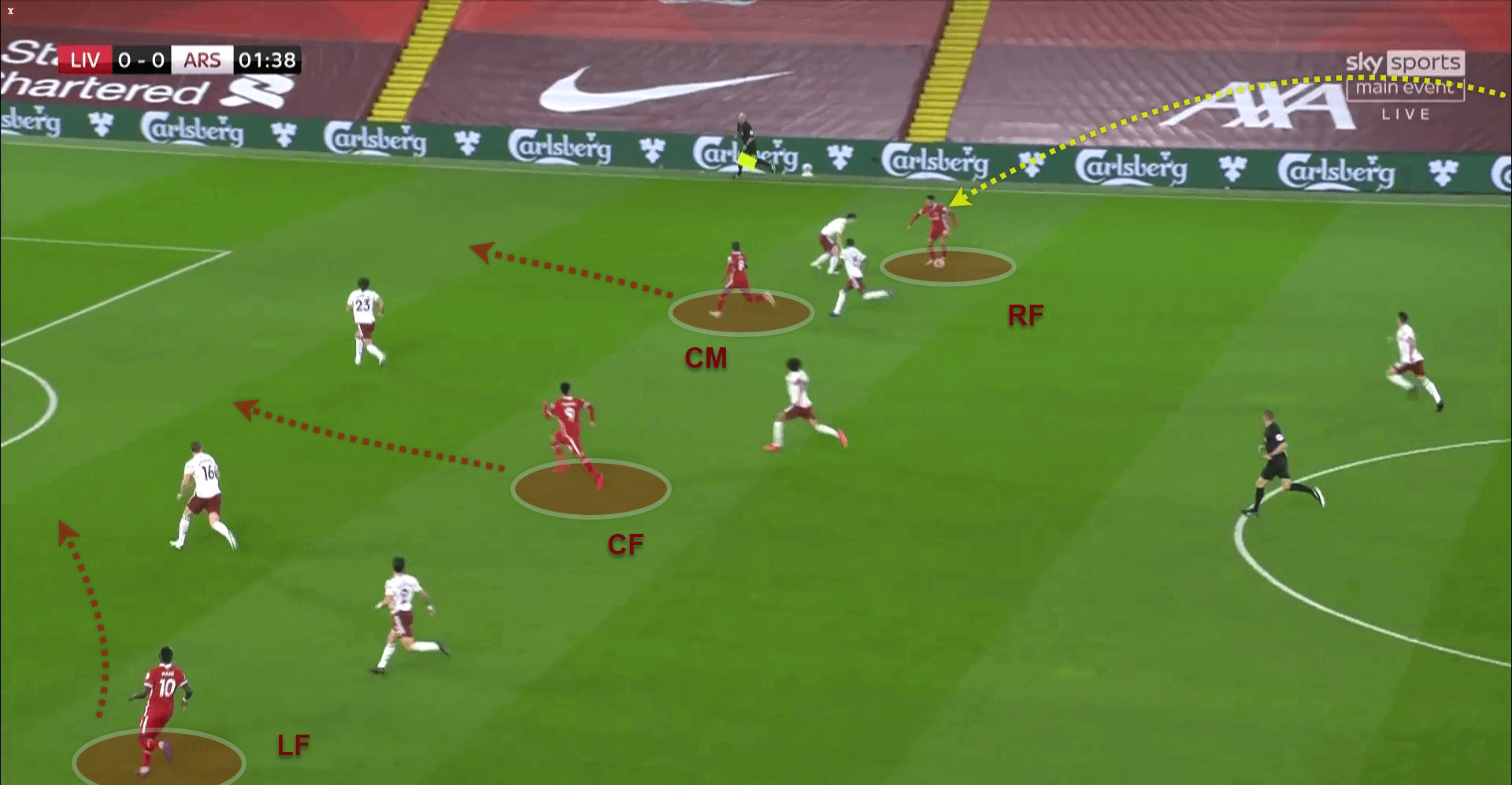 Salah takes down the ball with minimal pressure. Within seconds, the Liverpool players are making runs forward at pace to offer forward passing options and crossing options in the space behind the Arsenal defence. Left-footed Salah can then drive inside with the ball protected from the Arsenal defender, while the Egyptian faces his multiple passing options. Notice the forward run of Naby Keïta to offer himself as a forward pass in the half-space channel. 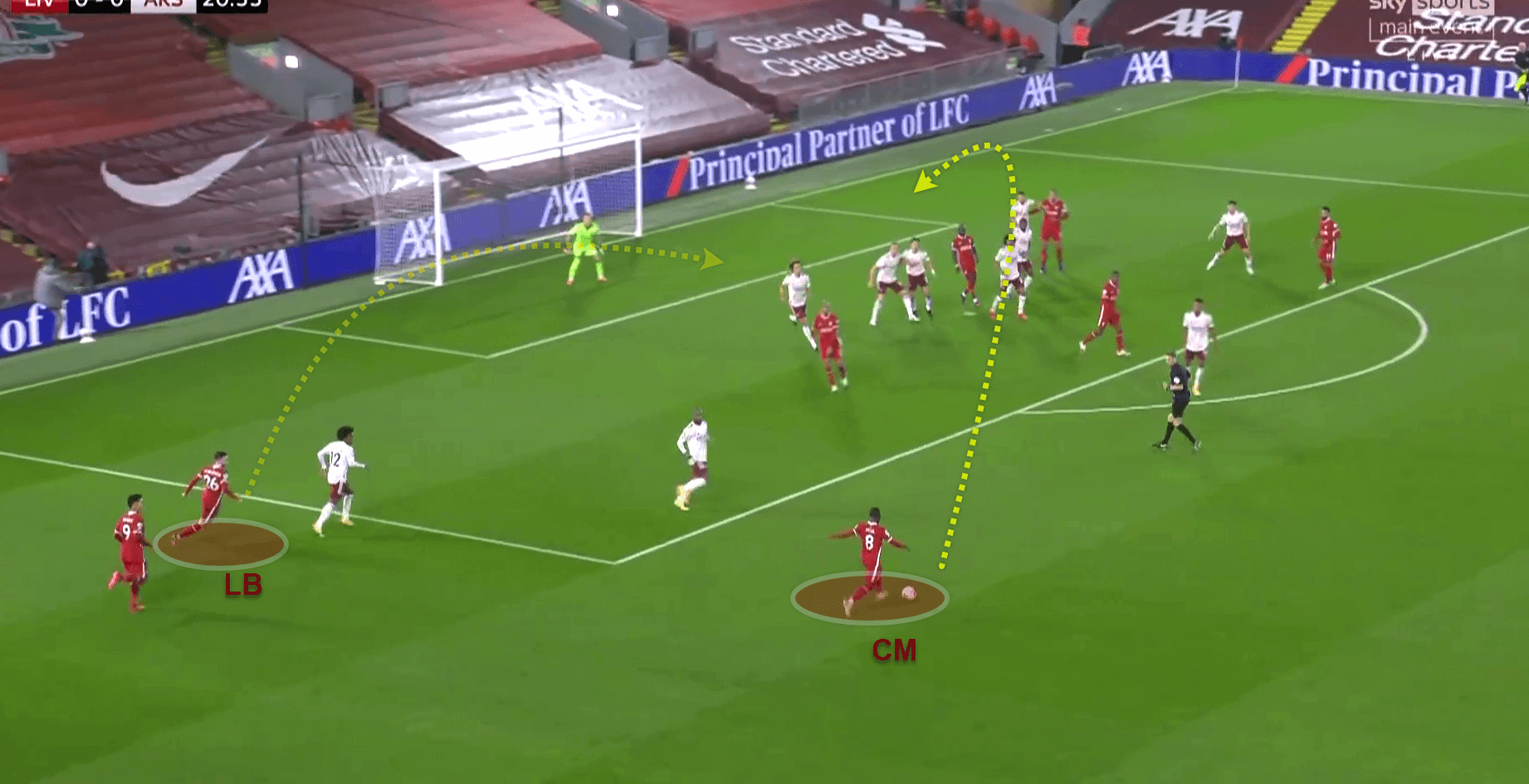 Above we see another moment, Liverpool has forced all 11 Arsenal players into the box. Moments after a set-piece we see Keïta has received a pass from Andy Robertson, from this point he turns and delivers an in-swinging cross to the back post.

Liverpool perhaps does this better than any other team but to have a left and right-footed crosser on both flanks opens up so many other goal-scoring opportunities. As it is challenging for teams to deny two crossers on the flanks playing at different heights to one another. As Arsenal had only one out-and-out wide player on each flank, Liverpool was better able to discover opportunities to penetrate from crosses as well as passes in the channel.

Agreed, it is an easy heading when analysing a team that conceded three goals; however, perhaps due to Liverpool’s sustained pressure and intensity, Arsenal was guilty of quite a few technical and tactical errors defensively.

Losing 1-v-1 defensive duels in their own third, allowing players to cut inside dribble towards goal as well as not marking late runners into the box Arsenal will no doubt go back and analyse some defensive errors before they play Liverpool again this week.

Above, we see Salah enter the Arsenal box moments before Liverpool score the equaliser to make it 1-1. Arsenal defender Keiran Tierney is engaged in a 1-v-1 against Salah outside the box. However, Salah manages to beat Tierney on the outside. Salah as a left-footer should have had a harder time driving inside from there as he had to expose the ball to the Arsenal defender to go by him.

As a result of this error, the two remaining Arsenal defenders Rob Holding and Héctor Bellerín are forced to shift across and cover, leaving Sadio Mané to convert from a rebound unmarked. 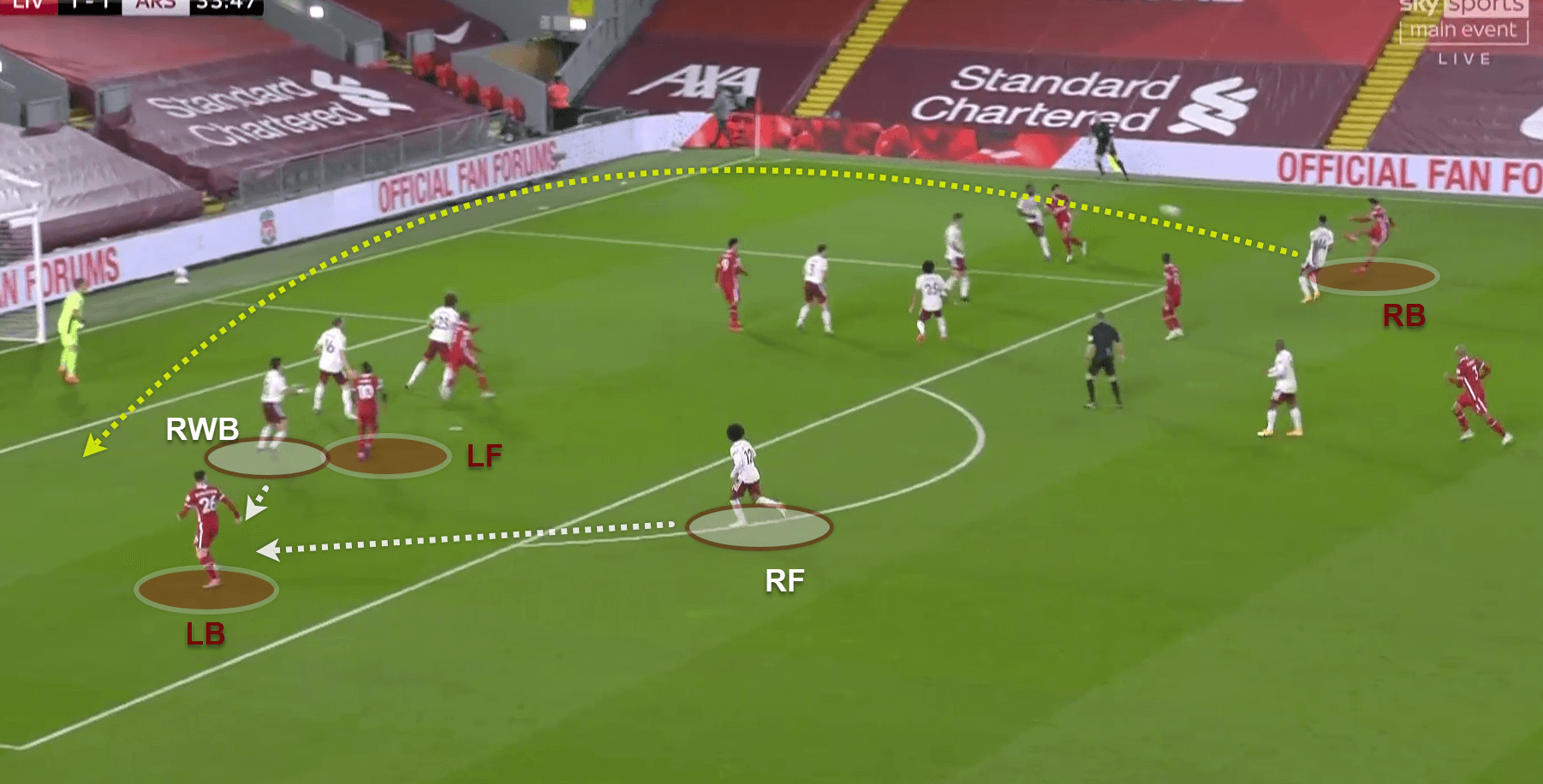 For Liverpool’s second goal, a collaboration of intelligent movement and good timing by Liverpool’s attackers that leads to the goal. Right-back Trent Alexander-Arnold delivers a one-touch cross to the back post. As the cross is delivered, Mané drifts inside dragging the Arsenal right-wing-back with him creating space for Robertson to take down and covert unmarked on his second touch. If Bellerín leaves Mané for Rob Holding, then Bellerín can defend the back post cross efficiently. 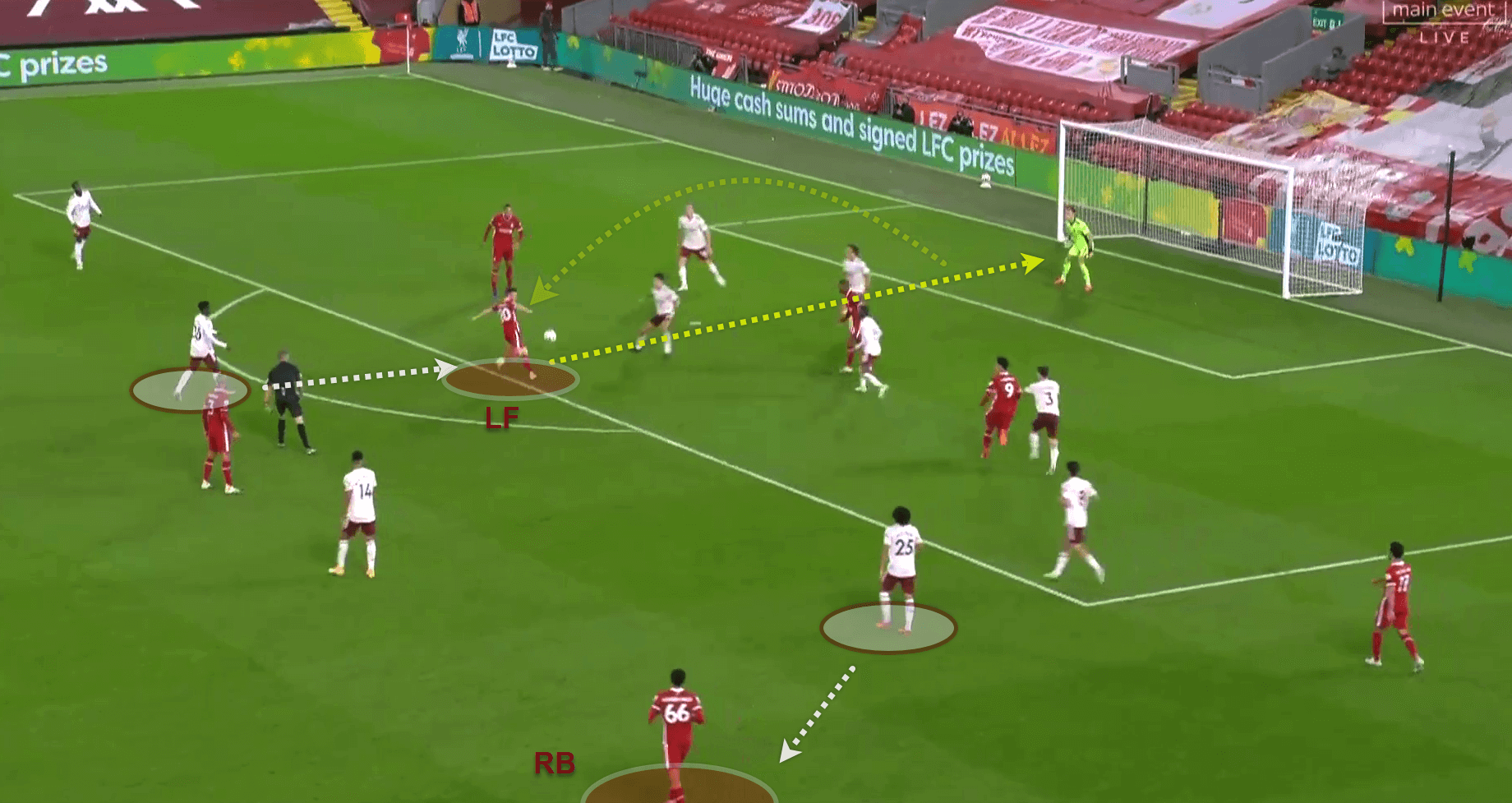 For Liverpool’s third and final goal, above, we see debutant Diogo Jota pick up the ball from a poor defensive header to the edge of the box, where he controls and converts down low to make it 3-1. Considering this picture, there is three crucial points of improvement for Arsenal. First Mohammad Elneney the Arsenal midfielder does not step out to apply pressure on the crosser Alexander-Arnold. As the ball comes from right-forward Salah on that same side before the ball is crossed. Second, David Luiz heads the ball only to the edge of his box, centrally in front of goal whereas a header out to the wide areas would deny a strike at goal. Finally, substitute striker Eddie Nketiah sees Jota is unmarked and in a dangerous position, Nketiah has ample time, and opportunity to defend the Portuguese forward before he can make a goal attempt.

Arsenal boss, Arteta did admit Liverpool have set a very high bar for Premier League teams to compete with. Yes, many learning opportunities have come from this game, and perhaps it was best for the Arsenal players to have been exposed to these challenges so early in the season.

The Gunners knew they would have been under fire for long periods of this game. Considering this the Arsenal boss would have identified an opportunity to counter the stretched Liverpool backline, in particular, the spaces vacated by the advanced Liverpool full-backs.

In the hope of unlocking the Liverpool defence and getting a goal, Arsenal committed 2/3 players forward in the defensive phase such that they could break quickly, combine well and get the reward. 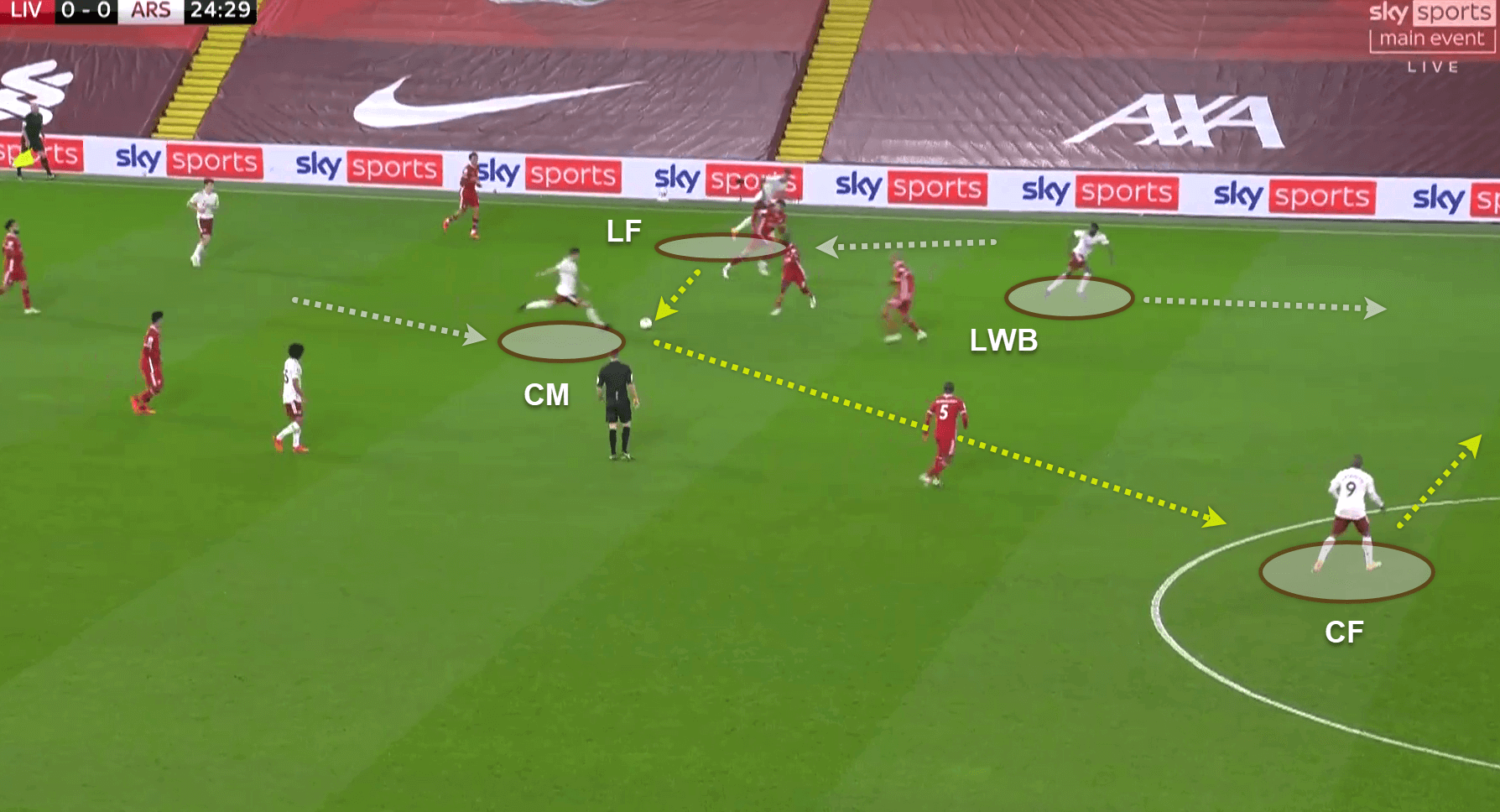 Above, we see Arsenal win back possession,  Granit Xhaka sprints towards the loose ball, and with his first touch, he plays a firm ground pass to Laczette. The Frenchman plays a first-time pass forward into the channel to meet the run of left-wing-back Ainsley Maitland-Niles. 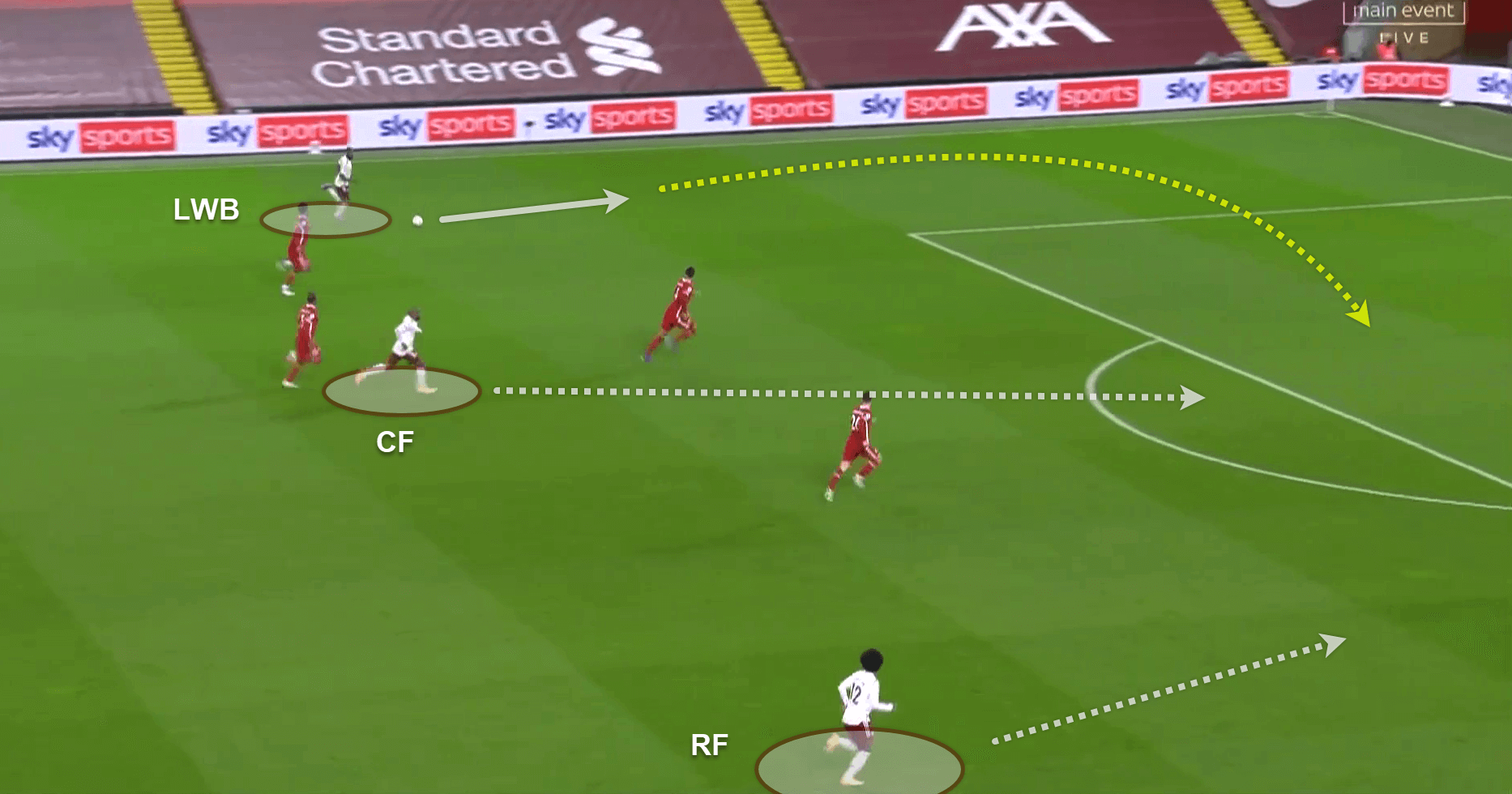 Maitland-Niles carries the ball forward in the channel and delivers a cross to meet the run of Lacazette. Notice Willian also keeps up with the pace of the attack to offer himself as an outlet or target for the back post. Although the cross meets the defender Robertson, it was Robertson’s error at this moment that gives Arsenal the lead.

Liverpool assistant manager Pepijn Lijnders has famously said: “intensity is our identity”.
In and out of possession the Red’s were ruthless, without delay the Merseysiders would go from a high-intensity attack to a high-intensity defence in transition and vice versa.

I would owe this aspect of Liverpool’s game above all others for nullifying the threat of Arsenal and getting success in front of goal. 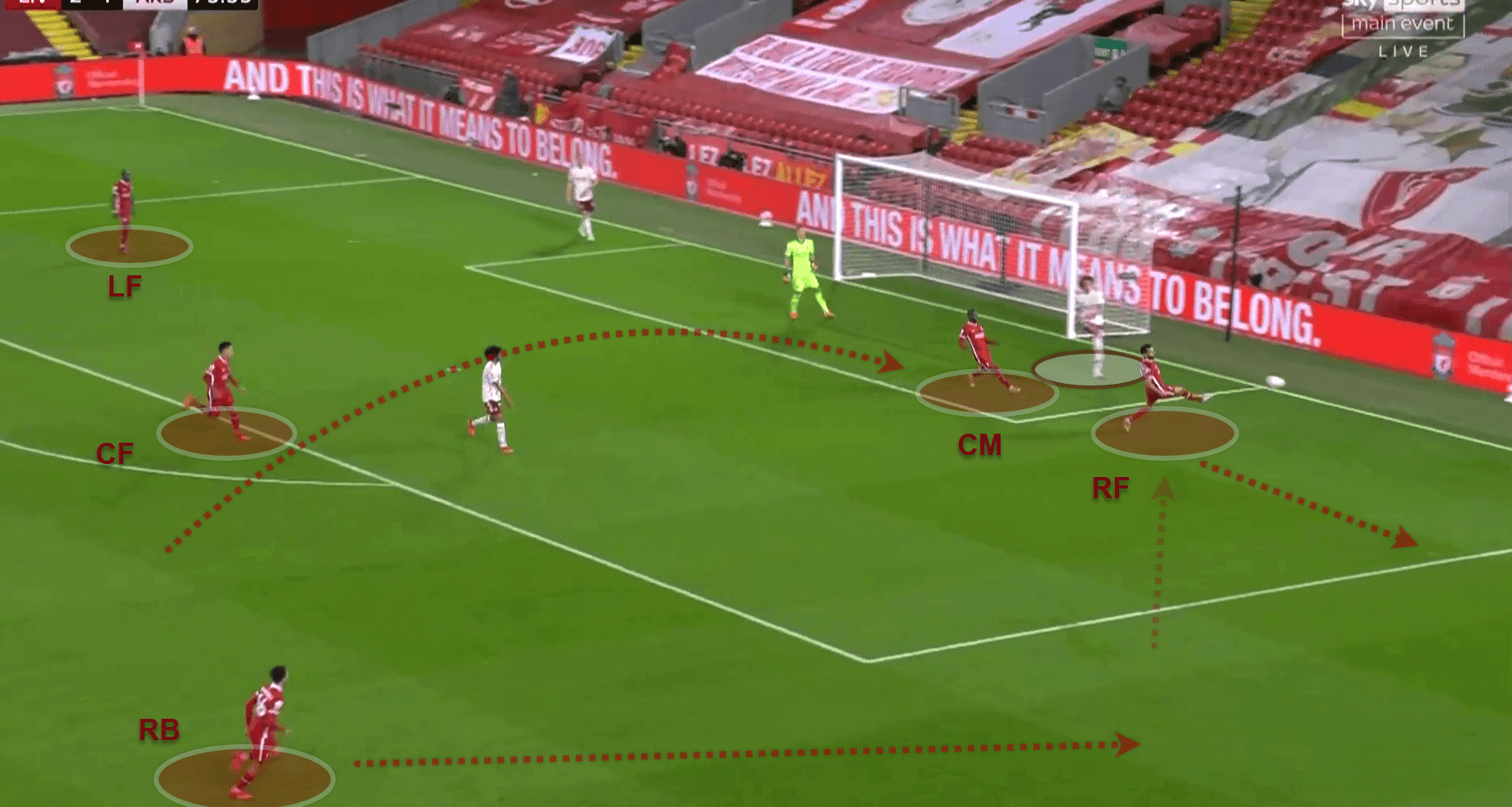 Above, we see how Liverpool set up to press high against Arsenal during the Gunner’s goal-kicks and restarts. Immediately when the first pass is played from the Arsenal goalkeeper, Liverpool steps into the box to engage the ball carrier while also applying man and space orientated pressing.

After the first pass is made, the first player to press the goalkeeper and the nearest centre-backs was Naby Keïta. This served to allow all other players to remain balanced while covering all passing angles as they too engage the press. This was a very effective pressing strategy from Liverpool as they forced Arsenal long on the majority of these occasions, in doing so, turning over possession. 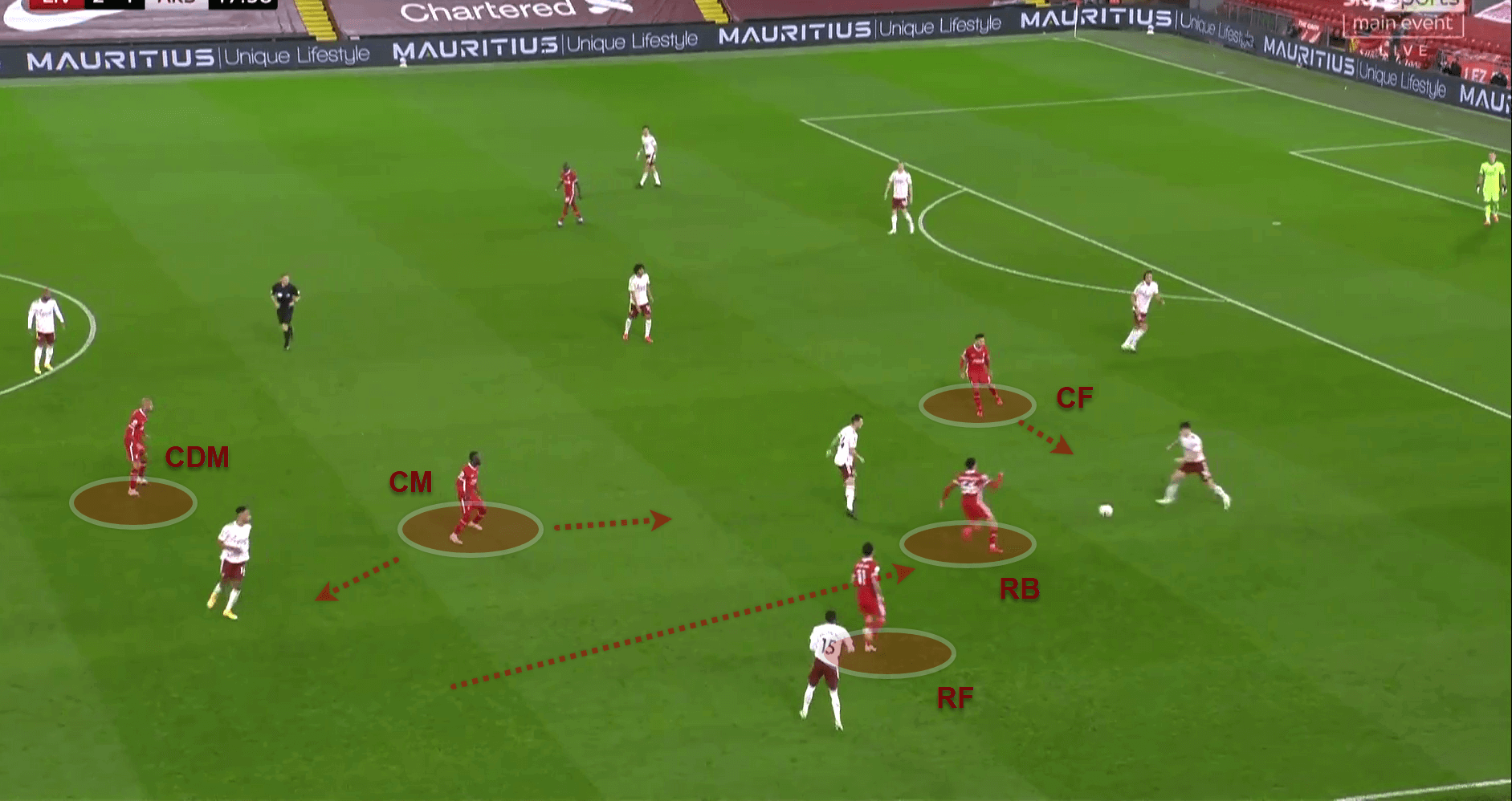 Again, above we see a moment Liverpool aggressively engage the press in the transition to defend.
To keep balance and screen all passing options, the forwards hold their position while the furthest player away right-back, Alexander-Arnold sprints forward to win back possession.

The Liverpool pressing strategy seemed unorthodox; however, it was effective. By having players make long vertical and horizontal sprints across the field while following the line of the previous pass, they are cutting out return passes, ultimately leading to ball carrier isolation.

Liverpool’s intensity and principles out of possession won them this game. Had some Arsenal players even of had time to lift their head, take a touch and find a pass when on the ball then we might have seen what more the Gunners could, however, they were seldom afforded the opportunity.

The Red’s go marching on as one of only three sides with a perfect three from three since the season began. Liverpool and Arsenal meet again the Carabao Cup this Thursday; however, it might be fair to suggest like last season, both teams will introduce a few squad players to allow players to rotate for that game.

Arsenal should not feel too disheartened, as Mikel Arteta rightly pointed out, what Arsenal have achieved since Arteta’s appointment nine months ago and compare that to Klopp’s first nine months in charge at Anfield, the North Londoners are showing encouraging signs of becoming one of the Premier League’s top teams again.

Liverpool go marching on in search their fourth win, away to Aston Villa next weekend while the Gunners host Sheffield United, a team that has failed to register a single goal since the 2020/21 Premier League season began.