The start of the calendar year is where things get serious. Teams struggling for form now have to pick up some points otherwise relegation becomes a real possibility. Teams looking to push for higher positions need to keep momentum building through the dense winter fixture list.

This Premier League fixture saw Tottenham travel to the south coast, where they met a tough Southampton side who had seen a recent change in fortunes, picking up seven points from the last nine available before this game.

In this tactical analysis, we look at the tactics implemented by Southampton and how they overcame a lacklustre Spurs. We also provide an analysis of the flaws in the Tottenham tactics which is restricting their attacking prowess. 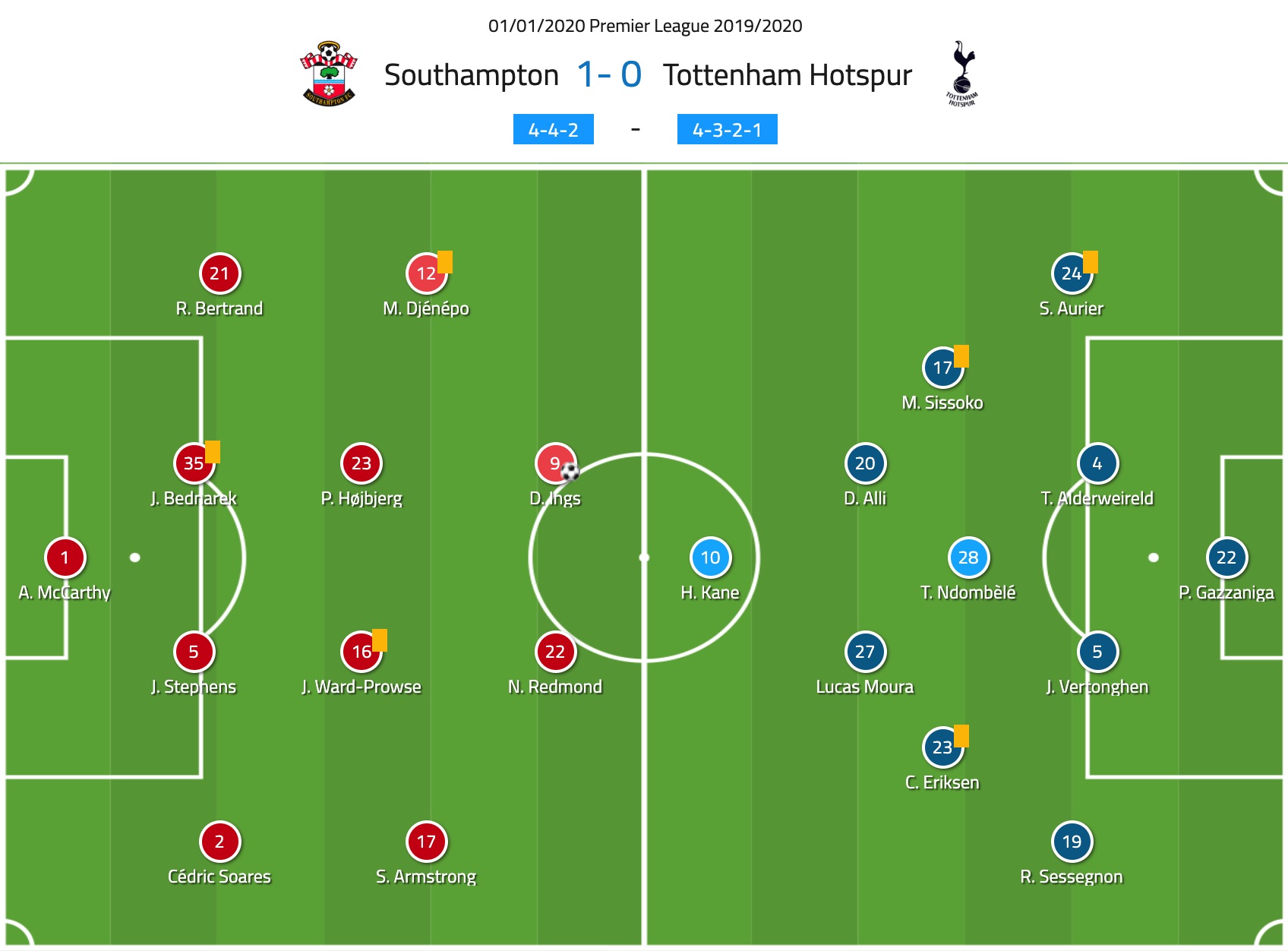 The hosts started in a traditional 4-4-2 shape, but their system was anything but. Danny Ings and Nathan Redmond led the line up front and were used as the first line in an aggressive Southampton press. The pair stayed narrow and moved in unison to block passing lanes into midfield whilst hassling the Tottenham defenders intently. Behind the first wave, James Ward-Prowse and Pierre-Emile Højbjerg commanded the second from their usual central midfield position. In this role, the duo constantly broke up play with aggressive interceptions, ground duels and if that failed, tactical fouls.

Moussa Djenepo and Stuart Armstrong provided the width. The wingers were instructed to run into the channels in offensive transition in an attempt to exploit the space vacated by the advancing Tottenham full-backs. Southampton’s full-backs each operated a slightly different role based on the system adopted by Spurs. Ryan Bertrand was given full license to attack, as he looked to support his winger with overlaps. The presence of Moussa Sissoko for Tottenham on the right-wing made this a viable tactic for Bertrand who was less afraid of being punished for his attacking role. This contrasted with Cédric Soares, who also was given license to go forward but was far more restricted due to the pace and guile of his opposite number, Lucas. This is evident in the passing map of the Saints below.

Despite their registered shape, the visitors actually started the game in a 4-2-3-1 system. Christian Eriksen and Tanguy Ndombele started as the double pivot in the base of the midfield. They dropped deeper in possessional cycles to collect the ball from the centre-back pairing of Jan Vertonghen and Toby Alderweireld. Dele Alli, Lucas and Sissoko made up the attacking three who supported Harry Kane in the lone striker role. Alli looked to pick up positions between the lines to link with the midfield pivot, and occasionally made movements from deep in behind the Southampton backline in an attempt to stretch the home side.

In possession Southampton weren’t immaculate, it was their excellent transitional and defending phases where they won the match. The home side didn’t look to build through the phases with long chains of short passing sequences. Instead, they had a direct tactic which quickly distorted the Tottenham shape and moved the ball into the final third much more quickly.

In their defensive third, Southampton looked to play short fluid football. Either Højbjerg or Ward-Prowse dropped to collect the ball as the centre-backs split. The full-backs pushed higher and wider to give an option once the initial pass was played into midfield.

This pass into midfield triggered Tottenham’s press. The visitors achieved a PPDA of 7.93 in the match. However, this didn’t phase the Saints who were clearly expecting this level of aggression from their opponents. Instead of rushing into a mistake, the home side smartly worked the ball to the spare man, highlighted red above.

Once with the spare man, rather than continuing to play short to build through the midfield, Southampton demonstrated that they had done their homework. Notice how Spurs use six players in their initial press. Southampton realised that to immediately punish this aggression, as soon as the spare man received the pass, a direct pass into the final third was an effective, low-risk option.

The Saints left four players forward to support this tactic. Above, the long ball is delivered after beating the press, which immediately creates a 4v4. The defensive line is turned and forced to retreat. The full-back is out of position and looking to recover the space lost to his respective winger. Finally, and most importantly, the gap between the defensive line and midfield line is so big that any second balls are almost guaranteed to be picked up by a Southampton attacker.

Looking at the picture above there are only two outcomes when the header is challenged for. Firstly, Ings wins the header and threads Armstrong in behind. Or, secondly, Vertonghen wins the header and Redmond picks up the second ball in acres of space in central midfield, ready to run at the retreating defensive line in a 4v4 situation. Either way, Southampton retain possession but high up the pitch as a result of this two-part fluid to direct football tactic.

To thwart this tactic, Tottenham needed to be more aggressive with their defensive line. Rather than drop and cater to the advancing Southampton attackers, Spurs needed to be organised and brave by holding a high line closer to the half-way line. Doing this would have reduced the vertical gaps between each positional line, and thus made them less vulnerable to the long ball.

However, Tottenham didn’t have the confidence to play that high and so, in the end, the tactic paid off. Ings broke away from a fleeting Tottenham defence and expertly slotted home to give the Saints the lead.

Out of possession, Southampton were even more impressive, demonstrating hard-work, coordination and anticipation – all key components of a successful press.

Ralph Hasenhüttl’s team operated a high man-to-man press, which we can see above. The Saints achieved a PPDA of 6.11 which is more aggressive than their average of 9.96. This intensity forced mistake after mistake out of Tottenham who struggled to build cohesive attacks amidst the high pressure. As a result, Southampton restricted Tottenham to an xG of just 1.12.

The Frenchman often struggles in the right inside-forward position as his attributes are not typecast for the role. His lack of ability in tight 2v2’s on the wing compounded with his weak sense of timing for a run in behind limits Tottenham’s ability to build attacks down the right side.

On the left side, we can see a different picture. Lucas is much more adept and finding pockets between the lines and as a result, sees more of the ball in more advanced areas of the pitch. Notice how there are also much stronger links between Lucas and his attacking teammates, as the Brazillian can use his dribbling ability to move inside, off the wing and into central areas where he can make fast interchanges in attempts to penetrate the opposition lines.

This limitation also impacts the balance further as teams are able to attack the right side of Tottenham more freely and not be punished in transition as we discussed earlier. The reason for his inclusion is obvious – Jose Mourinho is trying to protect a vulnerable Serge Aurier. However, the imbalance it causes to the North London club is clear in the two pictures.

A sobering defeat for Mourinho and his men who have been hit with a lightning bolt of reality since his appointment six weeks ago. More time on the training ground is needed to build a structure in this delicate Tottenham outfit. A huge question mark, however, hangs over Mourinho’s head as to whether he’s still able to instil it.

Southampton, on the other hand, will be delighted with both the result and their performance. They implemented their tactics perfectly on and off the ball, and controlled the tempo of the game. They were the better side on the day and can be proud of the fact they deserved to win the match. Saints fans will be hoping to continue this level of performance and keep moving up the table away from danger and on to bigger things.