Chelsea’s new season under Frank Lampard has been a rollercoaster. They have had decent games, such as the UEFA Super Cup final where they lost in a penalty shootout against Liverpool, and games where the result was not aligned with their performance inside the pitch, like the 4-0 loss against Manchester United.

Although the team is still trying to adapt to Lampard’s style, the defensive performance has been so far their weakest link. Until the last weekend game against Brighton, Chelsea had not been able to secure a single clean sheet during the season, in any of the competitions they are facing.

Meanwhile, Brighton started the season with the right foot beating Watford 3-0 on the first game of the Premier League, but since then they have not been able to win again. In the Carabao Cup, they barely eliminated Bristol Rovers in the first round but were then kicked out of the tournament by Aston Villa in the following round. Chris Hughton was laid off given their weak start to the season.

In this tactical analysis, we go over the tactics employed by both Chelsea and Brighton in the 2-0 victory of the former. Although just starting, in a season that has been so far dominated by Liverpool, Chelsea managed to get closer to European cup places while Brighton is starting to see the relegation zone as they stand 16th just by goal difference. 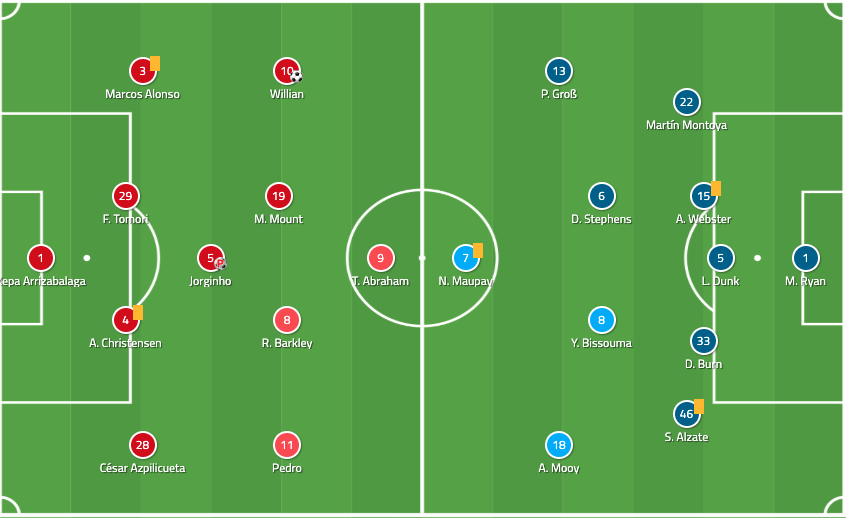 Chelsea started with a 4-1-4-1, with Jorginho as a sole central midfielder. Surrounded by very offensive players, he was very important in leading the defensive pressure imposed by Chelsea, forcing his teammates to collaborate on the task. Tammy Abraham was located as the sole striker, and although he didn’t score, he had a good game resulting in a constant problem for Brighton defenders.

The visitors played with a 4-4-2 that alternated into a 5-4-1. Sometimes when defending they had two forwards as the most offensive line, with Neal Maupay and Pascal Groß, but as the team was usually located entirely in their half, Groß could move between the offensive and midfield line.

A tale of the two wings

Chelsea’s start of the game was very intense. Without the ball, they inflicted a big amount of pressure onto the Brighton players that usually resulted in either lost possession or long balls by Brighton trying to ease the game far from their goal area. Tammy Abraham as a sole striker was usually backed by Pedro, Willian, Ross Barkley, Mason Mount and Jorginho in their pressing efforts, blocking both wings and the centre channel. 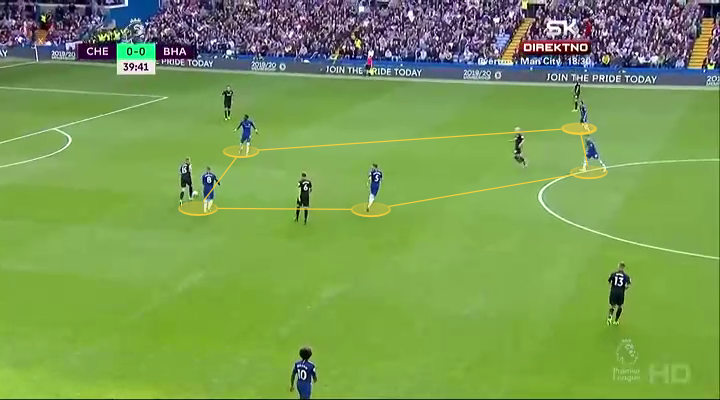 When attacking, Chelsea had a very direct attacking game, usually accelerating the game closer to the middle of the pitch. They needed two or three vertical passes at the most to get closer to Brighton’s goal area.

Their attacks were done mostly through the wings, with different setups on each. On the right wing, we saw some very interesting swaps in the positioning of Azpilicueta, Barkley and Pedro. The last two interchangeably moved back closer to the defensive line while Azpilicueta did forward runs looking to receive long balls by Pedro or Barkley. The images below show a case where Pedro moved back to receive the ball while the second showed Barkley doing the same, and in both cases with Azpilicueta running forward. 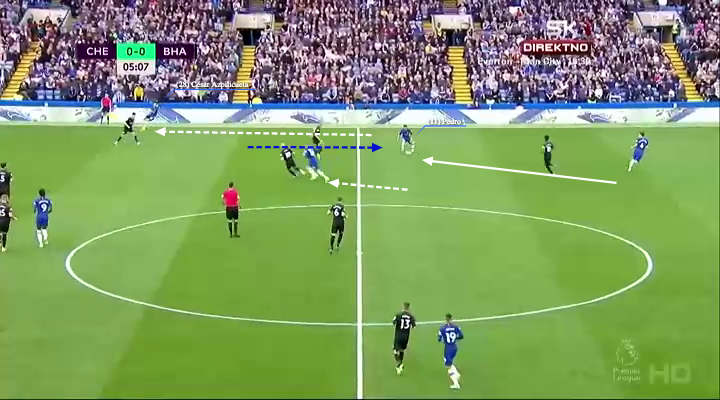 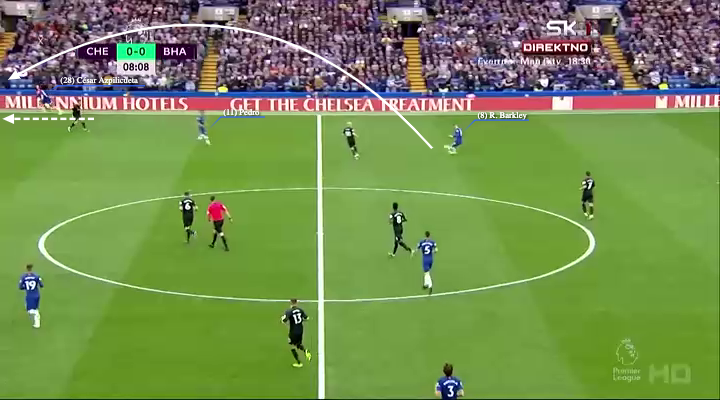 Brighton players were confused by these movements and usually allowed the player from Chelsea that moved back to receive with space and time to execute the pass. Because Azpilicueta was usually the one finishing the plays, these attacks went wide in an attempt to get the Spanish full-back to throw crosses into Brighton goal’s area.

On the other wing, the positioning of Marcos Alonso was more similar to a usual full-back while Willian stood as a winger on the same side. The build-up was usually done through Marcos Alonso and when Willian had the ball, because he is a right-footer, he mostly cut inside trying to find Abraham or throwing long shots. 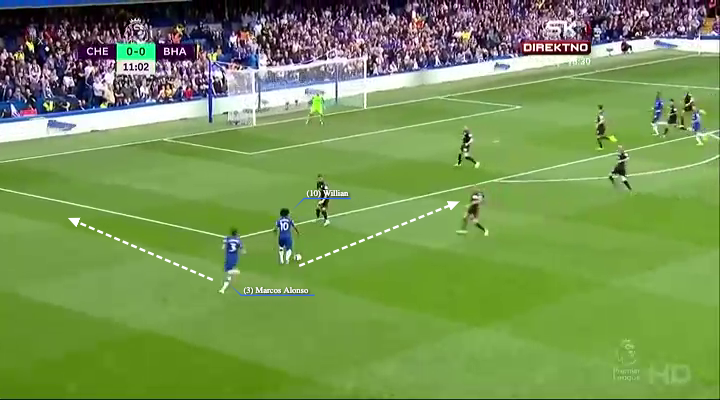 This attacking scheme, though intense, didn’t result in very clear goal chances by Chelsea since they had mostly long shots and set plays as their closest chances. But it helped stop Brighton from playing much, if any, offensive football.

Do you need an incentive to attack?

While the previous analysis was related to the attack of Chelsea, it was also interesting to see the lack of attacking interest by Brighton. By the 57th minute, as the image below shows, the visitors had zero attempts on goal, almost after two-thirds of the game. Their actual first attempt was in the 60th minute. 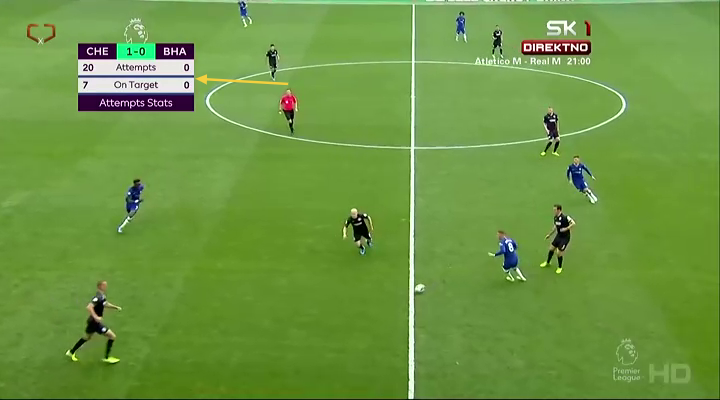 Although Brighton usually tried to build up from the back, during and after Chelsea’s initial pressure they were unable to create clear goal chances. They tried either by long balls, that usually were dependent on the individual quality of their forwards – mainly Maupay – which wasn’t present in the game.

Or they sometimes were able to build-up through the wings, especially the left one during the second half after Gaëtan Bong entered the game in a substitution that was correctly read by Graham Potter, as most of the attacks they tried came by Bong.

They took advantage of the weaker defending by Chelsea’s right wing, and the fact that Azpilicueta also tended to move higher more than the other wing. Eventually, Lampard had to respond by including Kovačić to support Jorginho, given Barkley’s less defensive orientation. The image below shows the spaces found on the left wing, and the spaces left by the midfield of Chelsea. 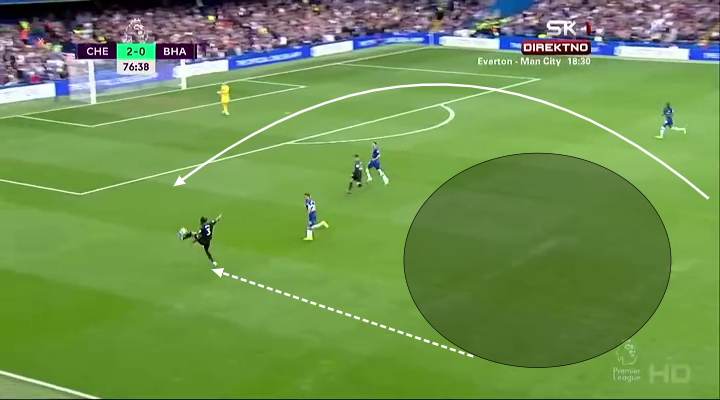 But those attempts usually ended with a passive collective performance, where most of Brighton players were positioned in a straight line next to Chelsea’s defenders, without creating any surprising movements, and forcing Bong to throw easy cross balls for the home team’s defence. Below you can see how all passes lines are blocked by Chelsea, and Brighton players lacked surprise to lose their markers. 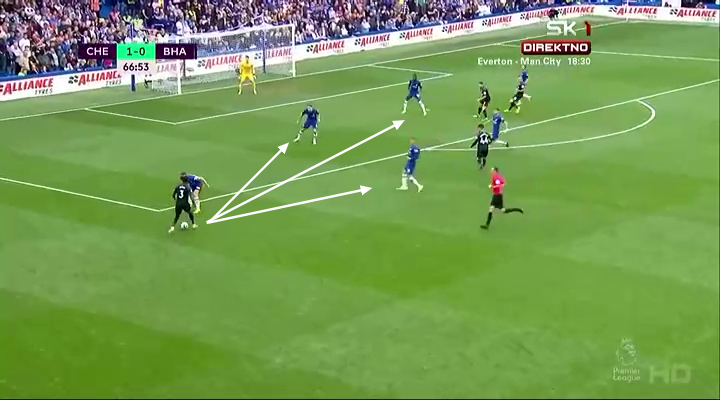 The Italian was one of the top performers of Chelsea. As the sole central midfielder, he had to time the team’s momentum both for pressing and attacking. When without possession, he was usually centrally positioned, covering the centre of the pitch without specific marking but providing coverage for any potential misposition of his teammates.

We can see this in the sequence below where Jorginho covers the spaces very efficiently, being close to the ball at all times and becoming the second line of defence in case any of his teammates could lose a duel. 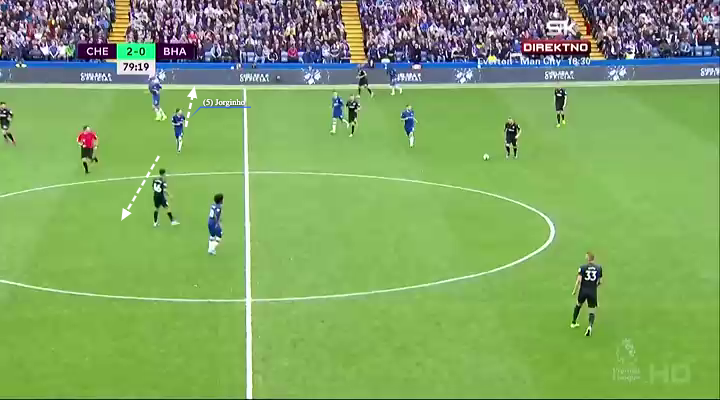 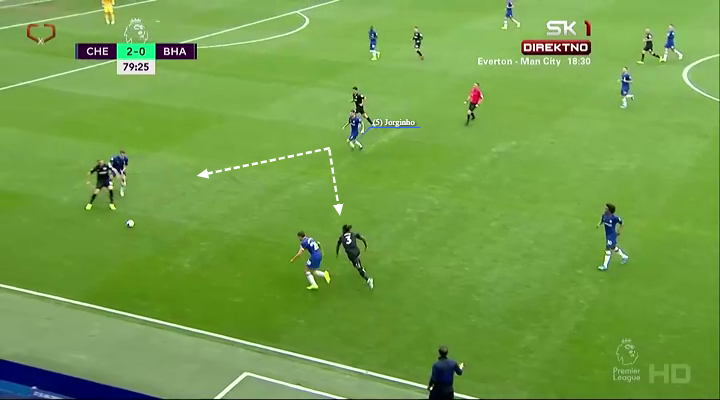 At the times of more intense pressure by Chelsea, he was usually the one dictating the moment the collective pressure started, being the leader of such pressure. Without Kante on his side, the physical demand was much larger for Jorginho.

Although he was helped by the other midfielders, they don’t have the defensive mindset found in the French international. See below how he crosses Chelsea’s offensive line to pressure Brighton’s goalkeeper. 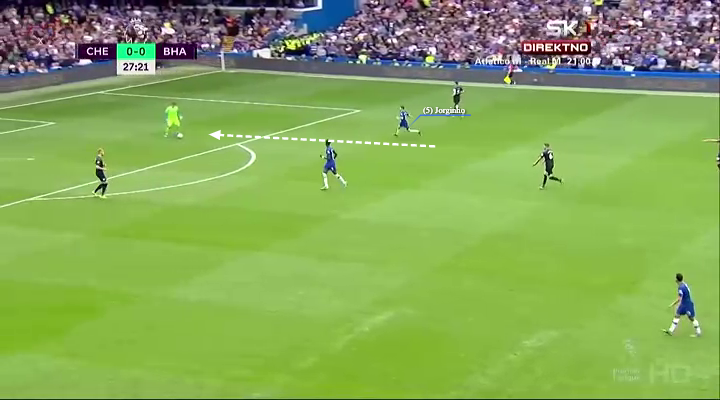 Offensively, he always was an alternative when building up from the back. Although at the beginning of the game Chelsea used more of the wings, which resulted in smaller offensive participation by the Italian, he usually moved with the play closer to Brighton’s goal area.

This allowed him to both participate offensively when the ball came back to the middle, or to be very close to Brighton’s midfielders in case possession was lost, putting a very effective counter pressure to recover the ball as fast as possible. Below you can see Jorginho very close to Brighton’s goal area, recovering the possession and not allowing a clean build-up by the visitors. 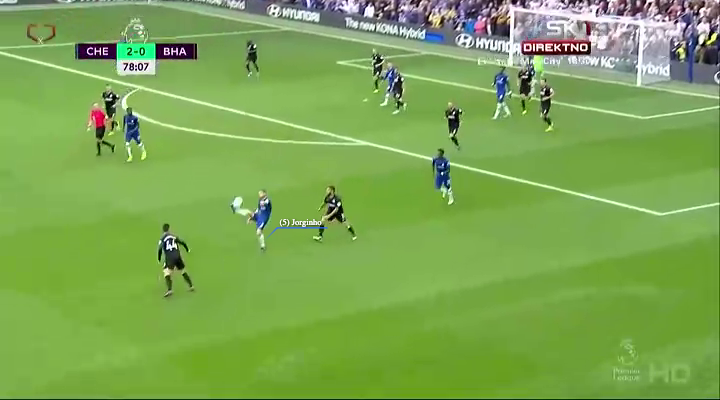 Kante has been one of the big players Chelsea has had in a while, and because of some injuries, he lately hasn’t had the continuity he wished. Jorginho, meanwhile, although proven already both in Stamford Bridge and Napoli before, was able to maintain the equilibrium of Chelsea’s midfield decently.

It was a well-played game by Chelsea. Although they dominated possession, they were not able to create very clear collective goal chances, at least until the final third of the game when Brighton decided to move up their lines.

Their intensity and well-practised movements need to translate in chances that can leave one of their players on an advantaged position to score. Maybe a difference that you see against Liverpool or Manchester City is that although teams tend to position very defensively against them, they manage to create a good amount of goal chances. Chelsea has a harder time doing that.

Brighton on their side, had a weak game, creating almost no danger to a team that have had defensive issues so far this season. They barely reacted after conceding a goal and it seems that the players are still trying to get used to Potter’s style. Although it is visible that the team tries to build up from the back, is still hard to find the attacking style they are trying to impose.

There is still plenty of time for them, but points are needed to move away from the relegation zone.