Chicago Red Stars won 1-3 at PNC Stadium when they met Houston Dash last weekend for the 2022 NWSL Challenge Cup thanks to the two Mallory Pugh goals and a penalty converted by Arin Wright. It was the first match of the season for both teams and it witnessed a great comeback for Chicago Red Stars following Rachel Daly’s first goal of the match while it showed that Houston Dash will need to revise and improve numerous things before the kick-off of the 2022 NWSL season.

Specifically, Houston Dash’s defence will need some improvements in terms of organisation, reaction and marking in order to concede less in the future and to be more solid. It is true that this is just the first game of the season and the analysis cannot be meticulous at this stage since everything can change to the better or to the worse in two or three games. Yet, it is fundamental to identify the errors early on and start working on all what went wrong so that the team doesn’t drop more points.

Moreover, working on improving the defensive organisation and performance during this time of the season is vital for both teams and for all NWSL teams because making sure that the team concedes less would ensure dropping less points as it would also let the team work comfortably on the attacking phase between the games.

In this tactical analysis article, the focus will mainly be on Houston Dash’s defensive errors while at the same time we will discover how both teams look tactically at the start of the season in addition to exploring Chicago Red Stars’ attacking performance and how they were able to make a valuable away comeback.

James Clarkson preferred to start this match relying on the 4-2-3-1 formation with Jane Campbell as a goalkeeper, Haley Hanson, Katie Naughton, Sophie Schmidt, Allysha Chapman in defence, Marisa Viggiano and Kelcie Hedge as central midfielders, Nichelle Prince and Maria Sánchez on the wings with Shea Groom playing as an advanced playmaker behind the former West Ham striker, Rachel Daly. The latter brings a lot of experience and depth to the team given that she regularly plays with some top European teams’ players like Chelsea, Arsenal, Manchester City and Manchester United during her time with the national English team, even though she was often played out of position.

On the other side, Christopher Petrucelli chose the 3-4-2-1 formation as he preferred to defend with a back-three, making sure to have a rather powerful midfield with dangerous wingers who would retreat whenever needed in defence. The line-up included Alyssa Naeher as a goalkeeper, Zoe Morse, Tierna Davidson and Tatumn Milazzo as central defenders, Vanessa DiBernardo and Danielle Colaprico as central midfielders, Bianca St-Georges and Arin Wright on the wings with Mallory Pugh and Yūki Nagasato supporting the striker Ella Stevens in attack. 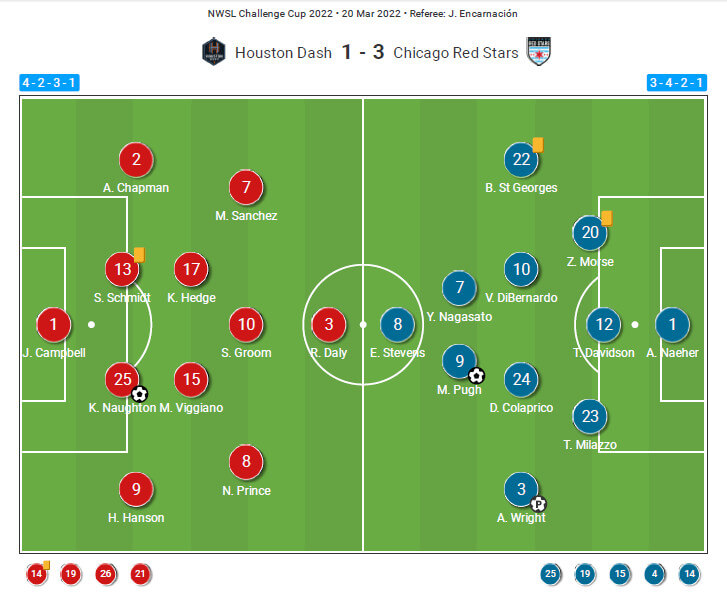 Houston Dash kicked off their new season with a home loss after they were ahead in the score for a few minutes. Despite scoring that goal following a well-executed free-kick from Daly and a great finish by Naughton, exploiting Naeher’s hesitant clearance, Houston Dash committed numerous defensive mistakes that led to conceding a first Chicago Red Stars’ goal just after a few minutes when Houston Dash’s defenders remained high and left a look of space ahead of Pugh who used her pace to surpass her two markers and reach the box.

Moreover, at the time of the pass, the two defenders needed to be closer to Pugh so that they can commit a foul, intercept the ball or at least disturb their opponent and prevent her from shooting on goal. Yet, this didn’t happen and the two defenders were easily surpassed, which allowed Pugh to advance with the ball almost freely, cut inside and score despite Campbell’s saving attempt. 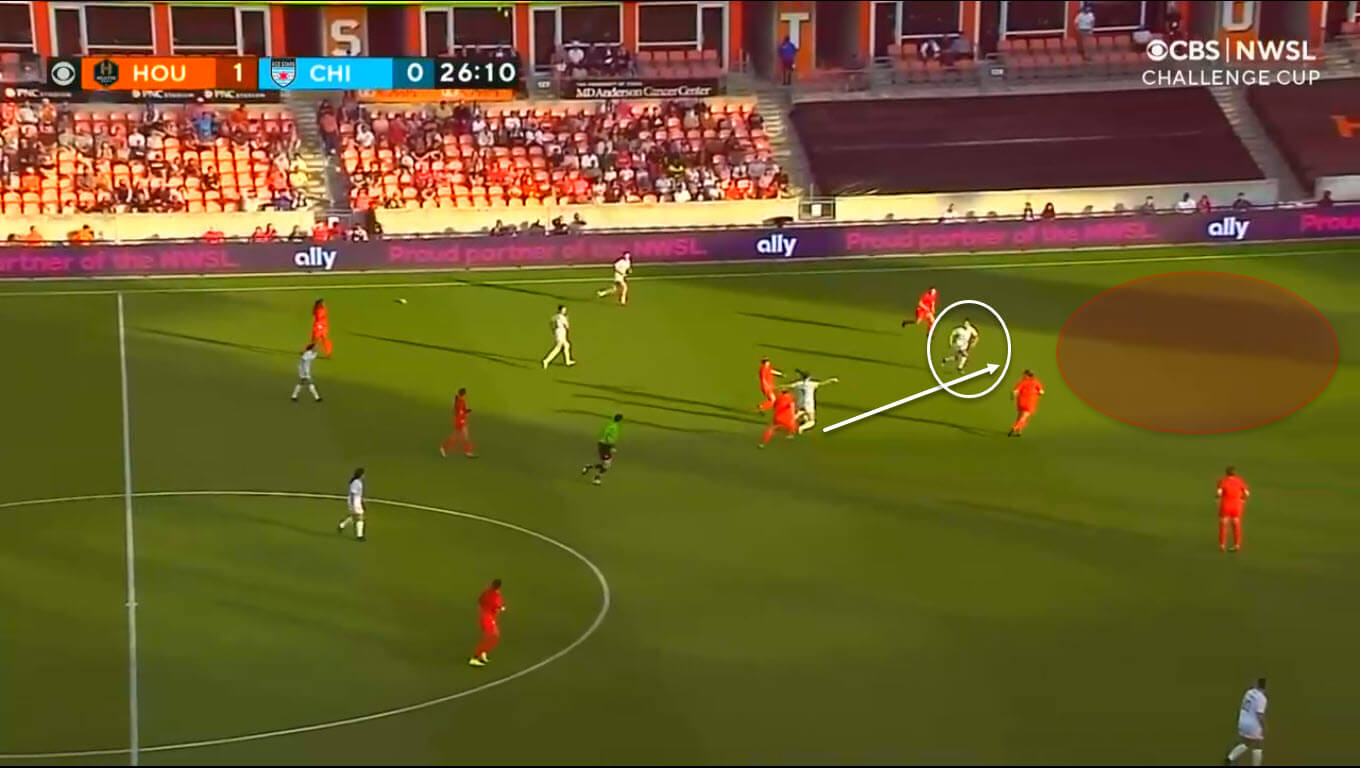 Houston Dash conceded 8 shots on target out of 11 shots, equalling an average of 72,73% of shots against, which is quite a lot. And despite winning 59,49% of the defensive duels, they were not as good in the air since they only won 46,88% out of those aerial duels. What is more worrying if we base our analysis on statistics, is the successful sliding tackles rate which doesn’t exceed the 16,67% in this match.

Houston Dash players attempted 6 sliding tackles, and just a single one of them was successful. Therefore, the team needs to work on improving their defensive decision-making and on organising when to stay high and when to retreat urgently to not concede counter-attacks.

More importantly, they will have to improve their performance in aerial duels as well as in their sliding tackles’ decisions and timing. All this can be improved quickly since the players will start getting back to their form by playing regularly, and therefore, problems related to timing and to defensive reactions can be solved in the near future. However, such issues need to be addressed before it becomes too late.

Working with the players on improving these defensive weaknesses in training can be very beneficial to accelerate the solving of such issues and to avoid conceding goals due to the same errors.

Houston Dash will also need to avoid falling into the trap of committing unnecessary mistakes inside the box and risk losing points for the sake of a risky contact that can be avoided such as what happened during the action that led to Chicago Red Stars’ penalty.

During that corner-kick, Schimdt pushed her direct opponent from the back at the moment when the latter was about to jump and try hitting the ball. Dash’s defender could have used another way to stop her opponent from reaching the ball such as jumping with her or anticipating her movement and jumping in front of her instead of staying at her back and trying to make her lose her balance. 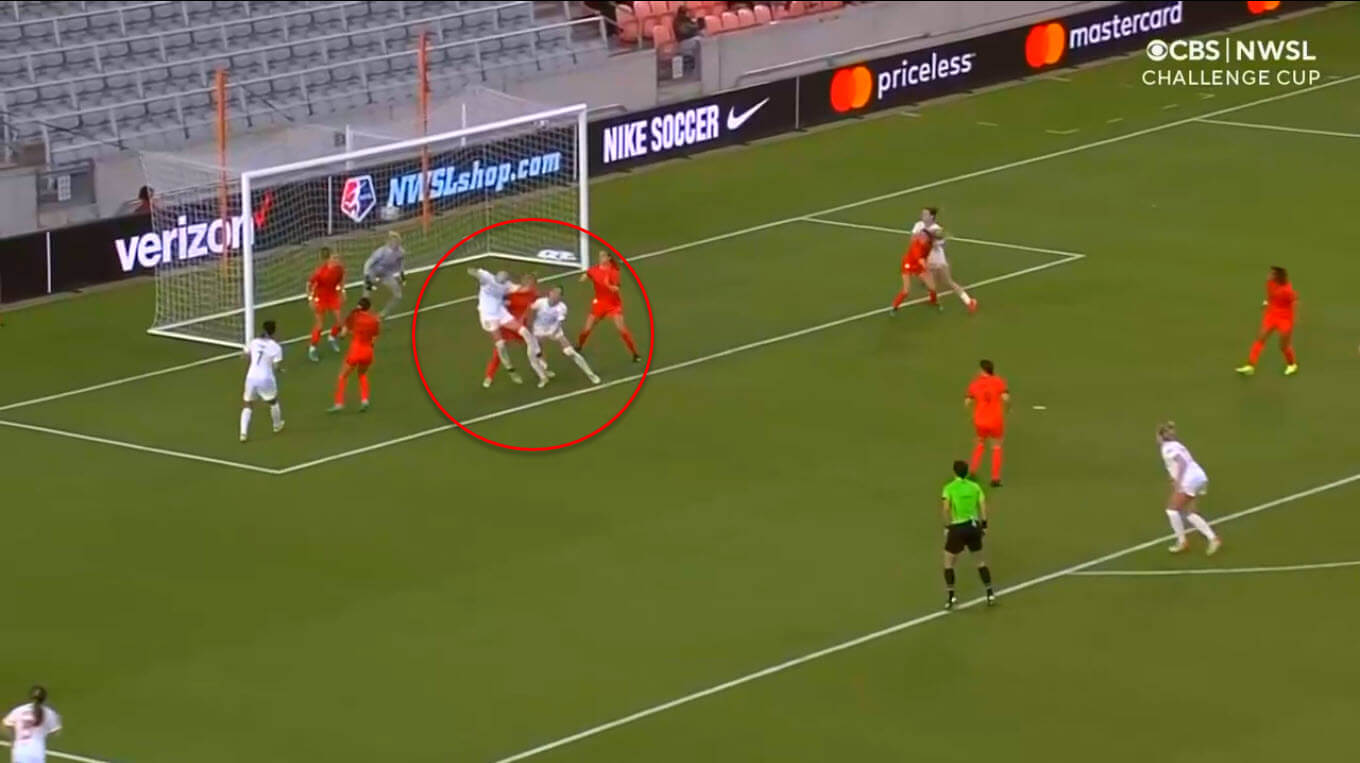 The third conceded goal from Houston Dash was also an avoidable one since they already knew that Pugh is a dangerous player who has already scored a goal in this same match when left alone. Therefore, such players shouldn’t have been given a lot of space for manoeuvre and specifically for shooting and this was not only the defenders’ mistakes but also Hedge and Viggiano’s since these two were the players who needed to form a defensive line in front of the defence and not let it exposed to threats.

In fact, the initial mistake that led to this goal action was a wrong control from Hedge when receiving a simple pass from Naughton. Such build-up and concentration errors can happen when players are lacking playing time such as in this case, yet, they will need to address such errors in training in order to find their references and avoid losing points due and getting punished following some avoidable errors.

Another defensive point that needs to be made in relation to the way of defending and specifically to how Naughton deflected Pugh’s shot. When making the decision of trying to deviate a shot, the defender needs to go for it and be crucial in clearing the ball or at least ensuring that it’s being deviated away from goal.

This can be done through sliding tackles or even with a powerful ball kick, especially if the shot is expected beforehand and when the defender has the time to make such a decision, like in our example. Naughton was intelligent enough to know that Pugh is going for a shot and to identify the path of the shot, yet, she wasn’t determined enough in her deviation attempt, which led to confusing Campbell and conceding a goal. 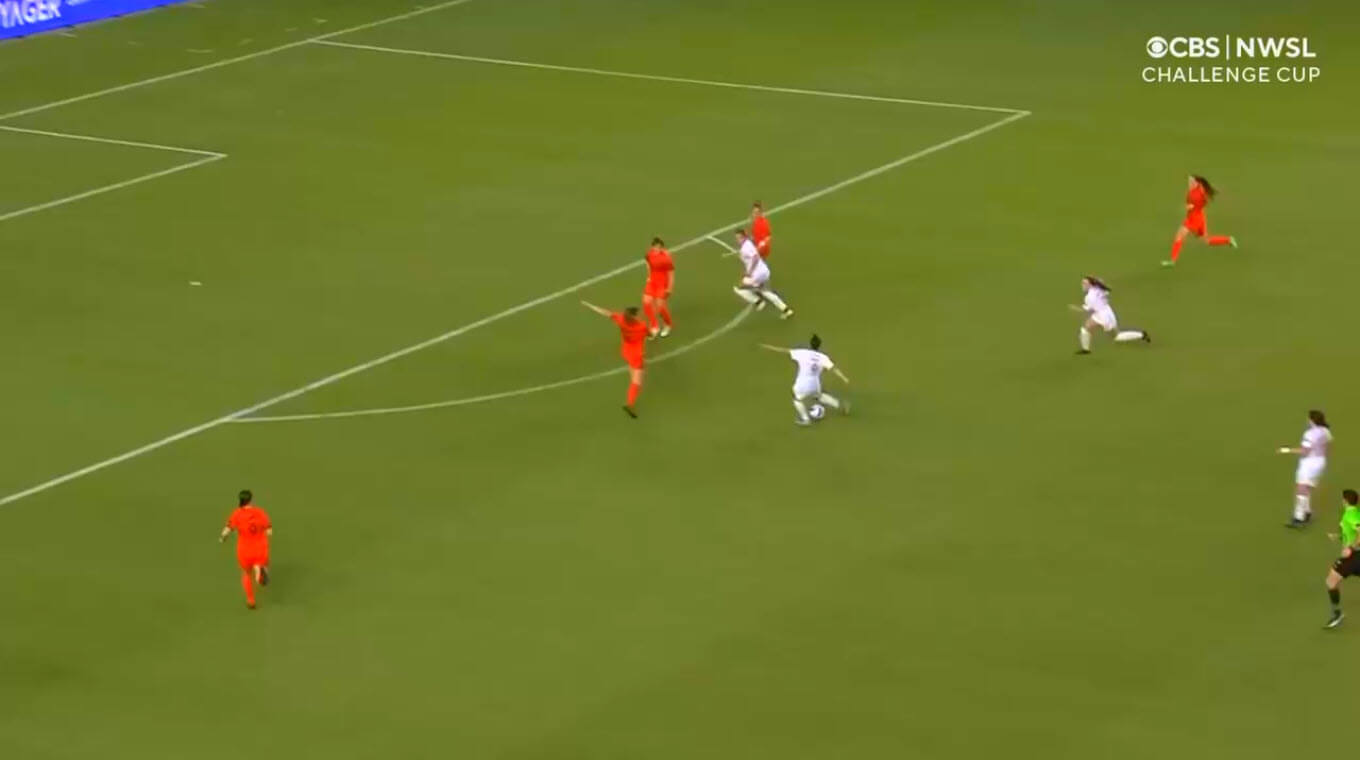 In comparison to Houston Dash, Chicago Red Stars were solid enough in defence, winning 65,28% of the defensive duels and making three successful sliding tackles, 32 clearances and 66 interceptions vs one single successful sliding tackle, 8 clearances and 38 interceptions for Houston Dash. In addition to that, Chicago Red Stars showed that they were more realistic than their opponents in terms of chance creation and especially in finishing since they shot 8 times on target out of 11 shots, while Houston Dash shot 5 times on target out of 11 shots.

Chicago Red Stars did not only exploit their opponents’ mistakes very well, but they also proved their ability to create organised actions that can be worked on even further in the future to be more automatic and more efficient. For instance, Ava Cook brought a lot of dynamism to her team’s attacks as soon as she was subbed on for Stevens at half-time. She was able to attract the defenders to her and received a pass while retreating to create a space for players coming from behind towards the box.

This action allowed Pugh to find a lot of empty space inside the box when Cook passed the ball to Nagasato. Then, Pugh was able to receive a through pass from Nagasato in that space, however the finishing was not on point. 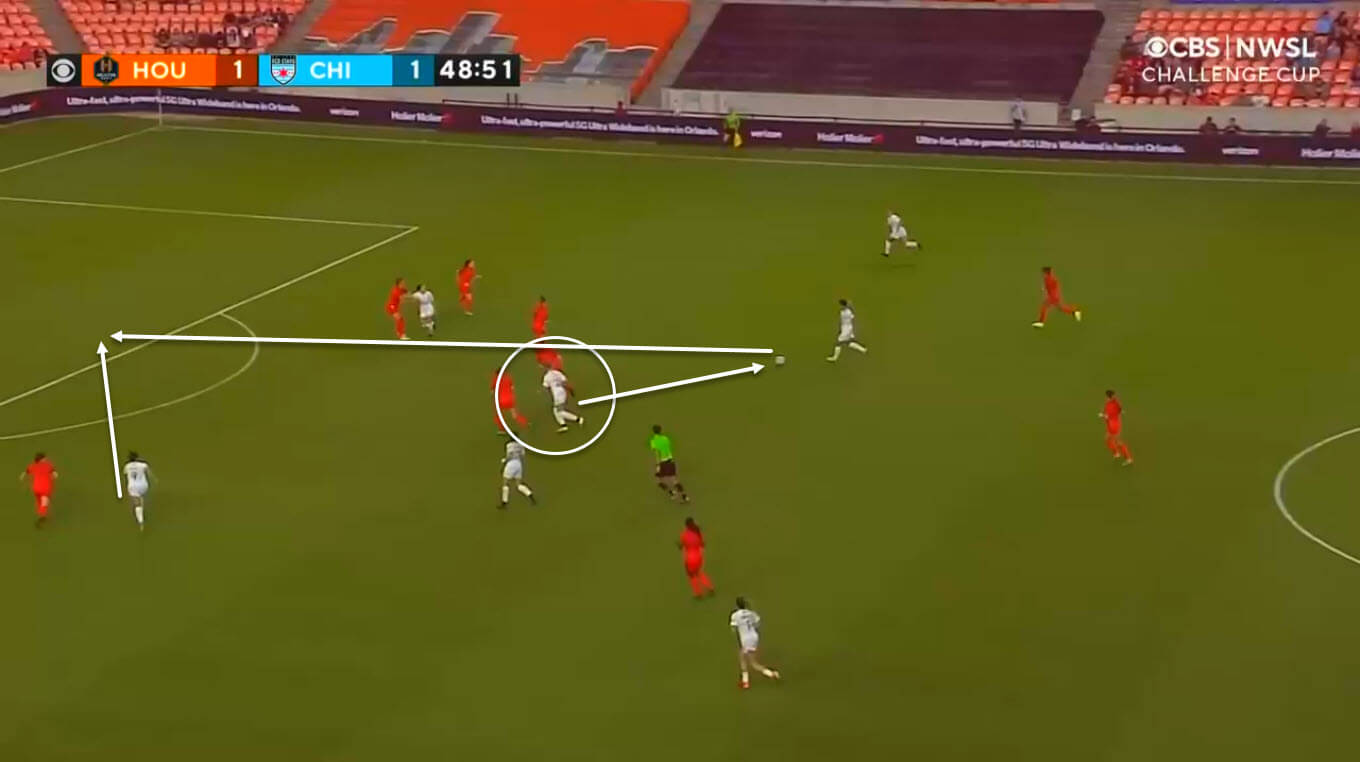 Chicago Red Stars can work even further on such movements and attacking plans since they showed in this match that they have quality players who can be dangerous whenever they are concentrated since their attacking movements were good and also varied.

This variety was noticed in a lot of instances especially during the second half as we saw Pugh and Cook exchanging roles many times with the latter being excellent in positioning herself according to the positions of her teammates and to defenders. She was very good at spotting the free areas and moving towards them in order to receive the ball in suitable situations. What facilitated this even further, is that Pugh attracted all the attention of defenders whenever she was near or inside the box, letting some room for Cook to escape from markers and ask for the ball.

In the following action, Sarah Griffith was about to cross when Cook freed herself from marking by retreating a little bit since she also noticed that Pugh has already filled her position. This enabled Cook to be completely free and receive the ball in a shooting position. But unfortunately for her, her volley attempt wasn’t good enough and it ended up at the feet of Wright who launched a great left-footed shot that was denied by Campbell. 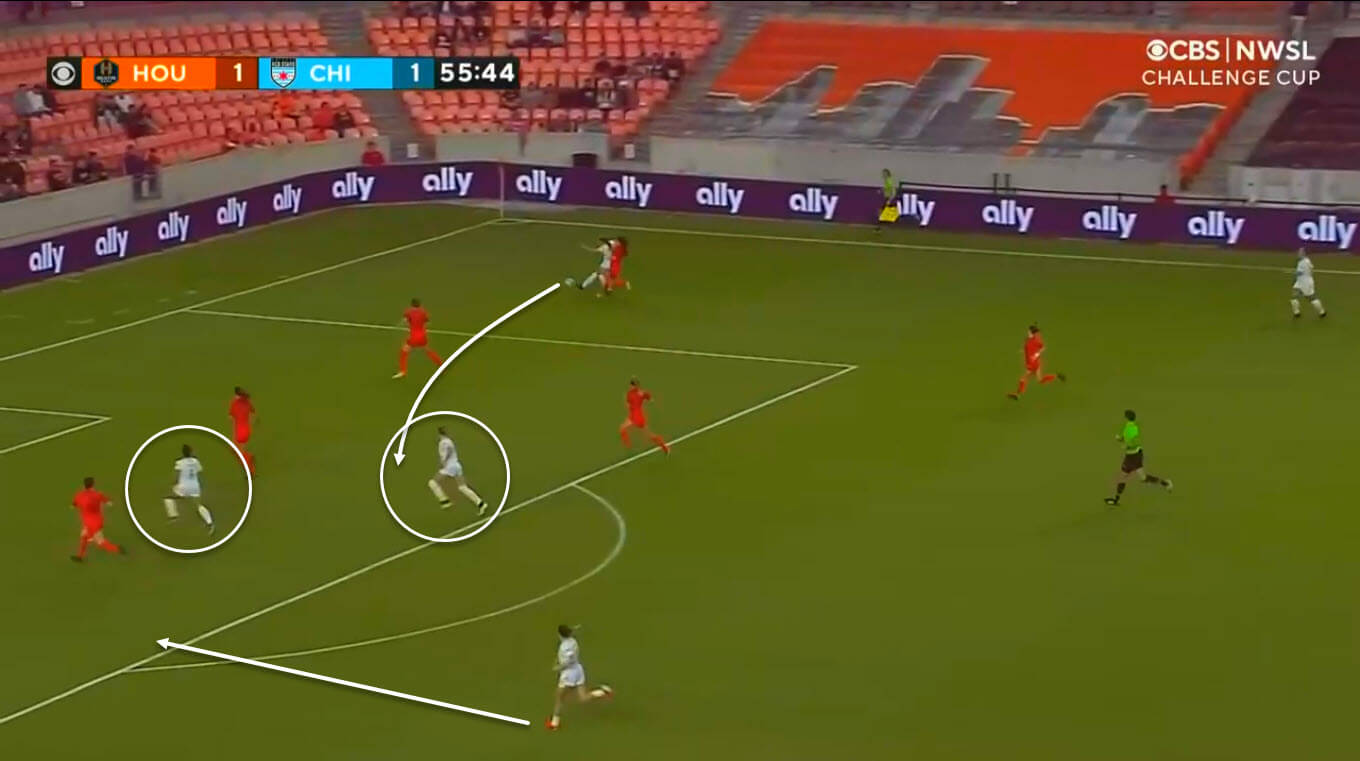 Chicago Red Stars were able to get a well-deserved win following an excellent performance against a tough team. Nevertheless, they should keep their feet at the ground and continue putting on similar or better performances in order to get better results in NWSL than last season. This can only be done by continuing on improving their attacking performances and especially training on adding more variety to their attacking plans and tactics as well as finishing them well.

On the other hand, Houston Dash will have to make numerous revisions and training regarding their defensive organisation, the build-up from the back and chance creation. The team needs to overcome these issues quickly before the NWSL season kicks off in order to avoid suffering from other results and lose precious points early in the competition.