Washington Spirit lifted the 2021’s NWSL trophy last weekend after beating Chicago Red Stars 2-1 and therefore they won their first-ever NWSL title after finishing as runners-up during the 2016’s season. The match was played at Lynn Family Stadium in Louisville between the third and the fourth in the NWSL standings after both teams were able to exclude OL Reign and Portland Thorns in the semi-finals.

Washington Spirit managed to lift one of the most competitive leagues in women’s football and they are now equal to teams like Chelsea, Bayern Munich, Juventus, Paris Saint-Germain and Barcelona who also won their national league trophies in the past 2020/21 season.

In this tactical analysis, we will analyse the reasons that helped Washington Spirit’s to overcome their opponents during the match while looking at their attacking and defensive tactics. At the same time, we will look at what prevented Chicago Red Stars from winning in an attempt to identify what lacked their overall performance.

Washington Spirit started the match using the 4-2-3-1 formation with Aubrey Bledsoe as a goalkeeper, Kelley O’Hara, Emily Sonnett, Sam Staab and Tegan McGrady in defence, Andi Sullivan and Dorian Bailey as a central midfielder with Ashley Sanchez playing as an advanced playmaker, Trinity Rodman and Tara McKeown as wingers to support the team’s striker, Ashley Hatch.

On the other side, Chicago Red Stars played according to the same 4-2-3-1 formation relying on Cassie Miller in goal, Tatumn Milazzo, Sarah Gorden, Tierna Davidson and Arin Wright in defence, Morgan Gautrat and Sarah Woldmoe as central midfielders, Vanessa DiBernardo as an advanced playmaker with both Rachel Hill and Mallory Pugh on the wings and Katie Johnson as a striker. 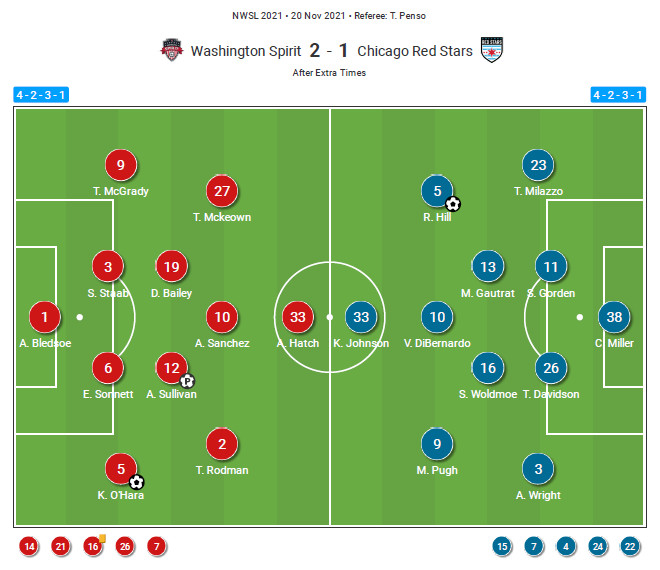 Chicago Red Stars did not start this match badly. On the contrary, they were the first to threaten their opponents’ goal thanks to Pugh’s individual efforts on the left-wing. What lacked the team however was the shooting accuracy and the absence of crucial finishing when being close to the penalty area. As you can see in this first Chicago Red Stars attempt, Pugh does very well to cut inside while dribbling away from her marker and opening the shooting angle for herself. Yet, she didn’t exploit the chance and her shot was neither angled nor powerful to confuse the goalkeeper. 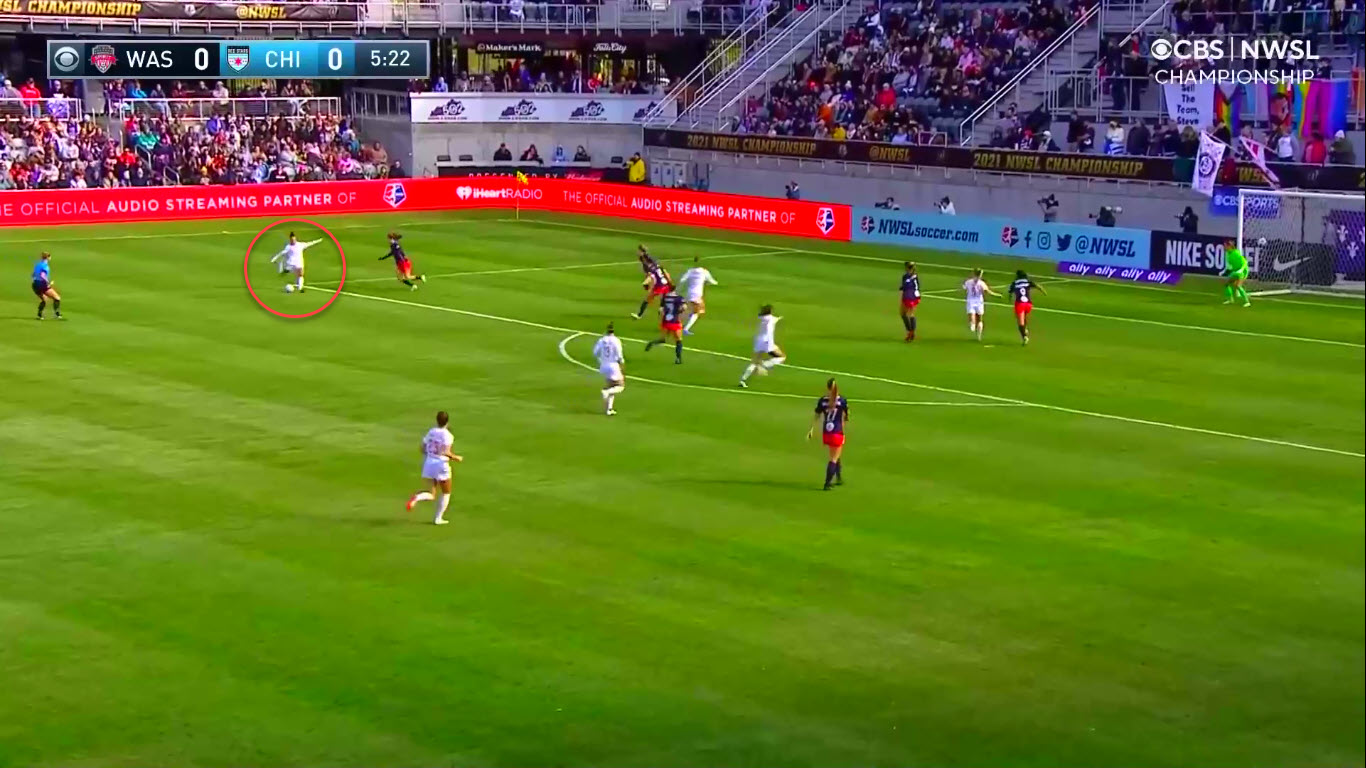 Chicago Red Stars exploited the fact that Washington Spirit’s defensive line was a bit advanced at times by serving the striker Johnson with through passes in the space between the back-four and the goalkeeper. In this example, you can see how Gordon was the player who initiated the attack with an intelligent pass towards Johnson. The only mistake concerns Johnson’s off the ball movement in this action since she started to advance before the pass was launched, and therefore, she fell in the trap of offside. 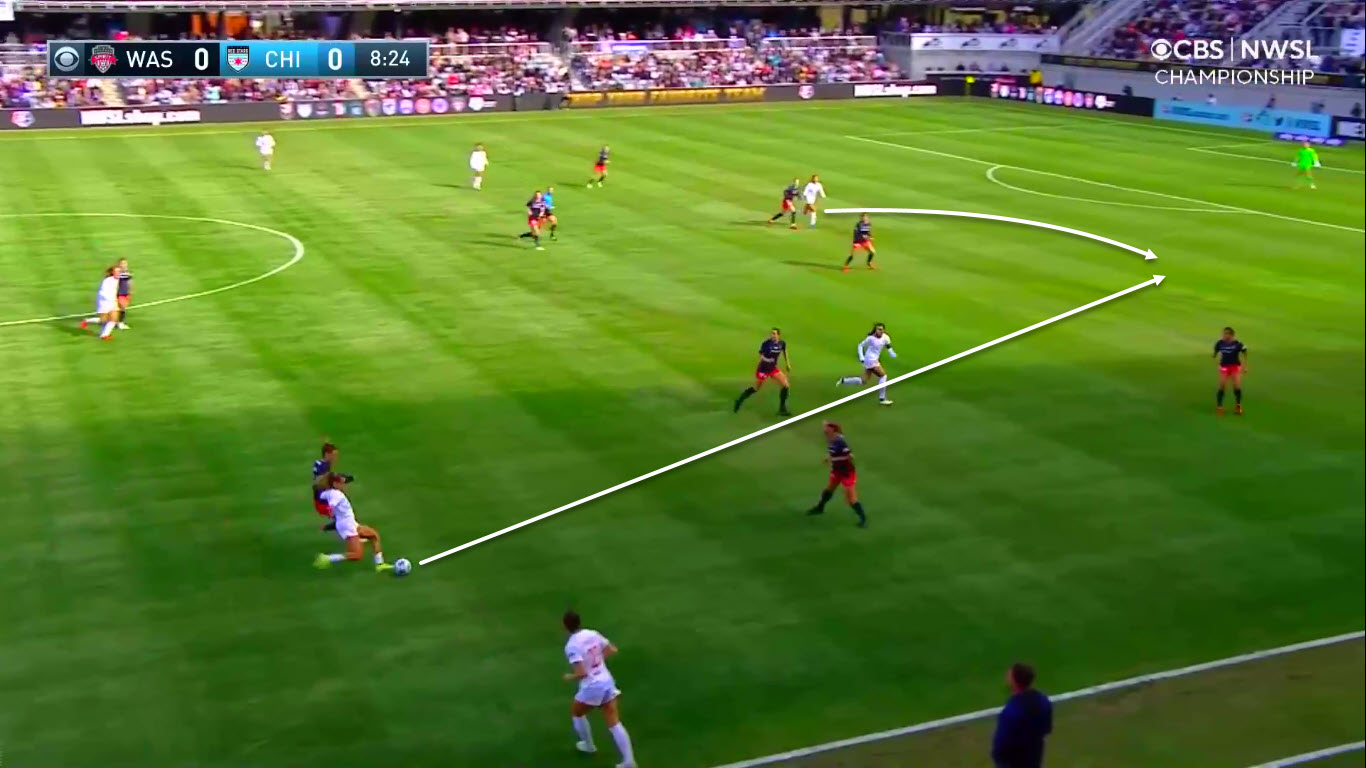 The injury of a leading player like DiBernardo has surely had its psychological and tactical impacts on the rest of the Chicago Red Stars’ players since DiBernanrdo was not only the captain but also the dynamo of her team especially when attacking. This playmaking role was attributed to Makenzy Doniak and the team who did her best to replace her teammate in the best possible way.

Chicago Red Stars continued their attacking attempts with the same idea in mind, letting Washington Spirit’s defensive line get high and then surprise them with accelerations without the ball and through passes towards the moving players. After the previous offside action, Hill was able to receive the ball in a regular position following an excellently timed through pass from Johnson who retreated to play as a playmaker and clear the way for both wingers and for Doniak who was advanced. This successful movement and pass created a lot of space for Hill who cut inside and aimed at shooting, but her shot was deflected. 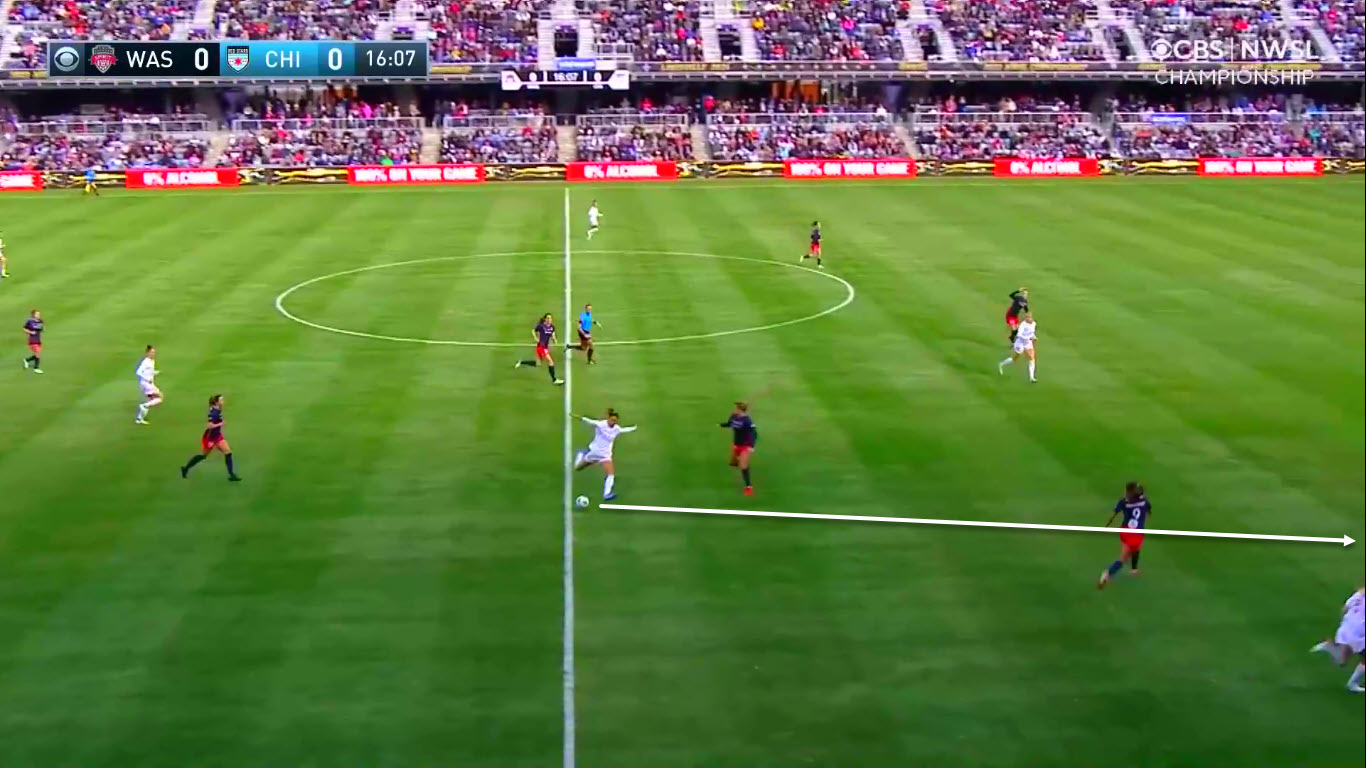 Chicago Red Stars were much more dangerous than Washington Spirit especially during the first half in terms of chance creation. At the same time, they were defensively organised and didn’t let Washington Spirit advance a lot or create something concrete. This was further confirmed with a goal at the last minute of the first half following a great effort from Pugh on the left-wing. The latter was crucial for her team on the attacking aspect and in this goal action she was quick enough to dribble past her direct opponent and cross the ball accurately in the direction of Hill who made a few steps to reach it and score the first goal of the match at a delicate timing. 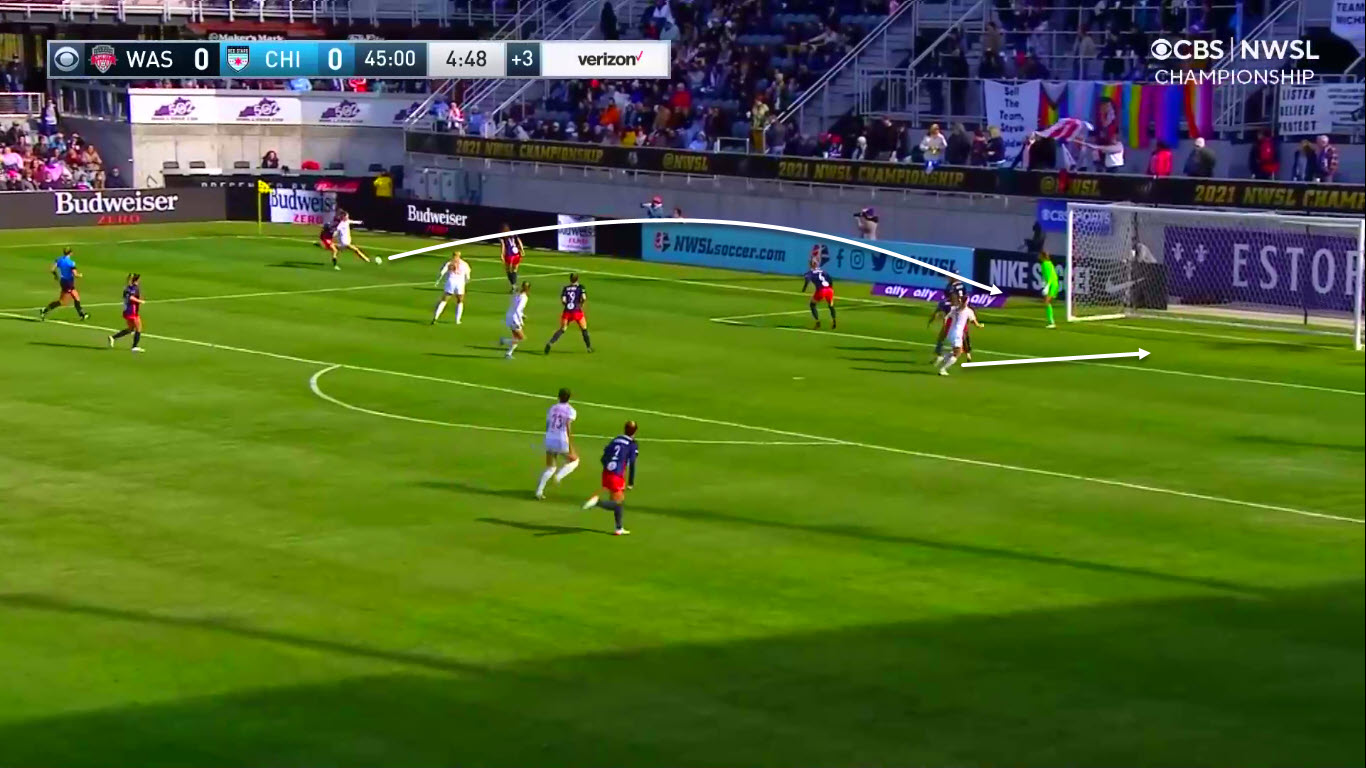 Pugh however was subbed out at the end of the first half and this added more imbalance to Chicago Red Stars’ attacking aspect since they continued the match without two of their key attacking players, Pugh and DiBernardo.

Moreover, the team looked very inactive during the second half and preferred to retreat and defend for most of the rest of the game, and that’s one of the reasons why they lost the command of the match. Allowing Washington Spirit the space and the time to attack resulted in numerous problems for Chicago Red Stars as Washington Spirit came back after the break with a lot of determination to get back in the game and score goals.

Since Chicago Red Stars retreated and were not as dangerous as in the first half, Washington Spirit exploited this approach and started the second half of the match with a lot more quickness and ball possession. They were able to attack regularly and threaten Chicago Red Stars’ goal quite often mainly through the left-wing where Rodman was excellent. In fact, she could have scored the team’s equalising goal at the 60th minute after she found some space for shooting but her shot hit the near post and went out. She was the primary source of danger for her team thanks to her dribbling skills and physical strength. At the same time, O’Hara was very useful on the right-wing with some accurate accelerations and crosses that brought danger and could have been exploited better by the players who were waiting inside the box. 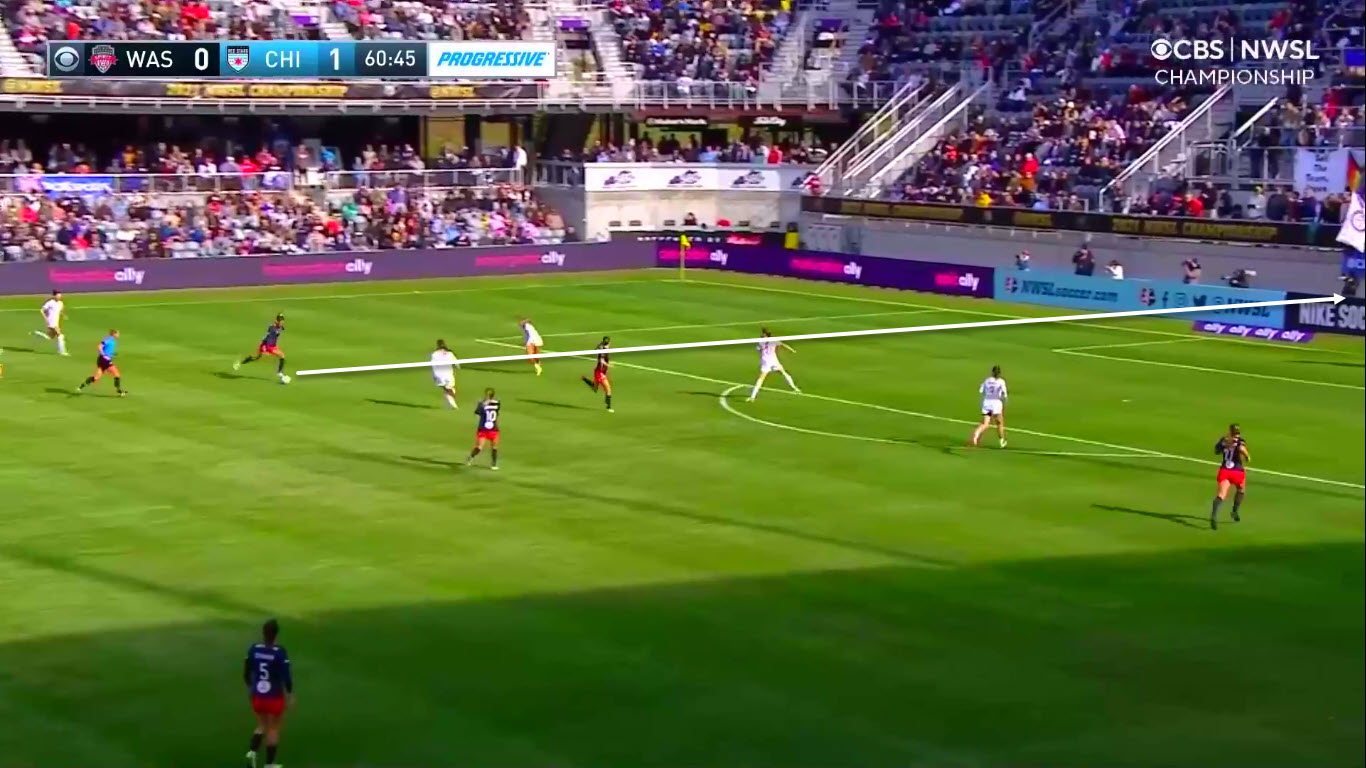 Rodman then was also the source of the action that awarded her team a penalty at the 65th minute following her insistency to control the ball well and keep it at her feet despite the disturbance from Chicago Red Stars’ defenders. McKeown was also intelligent enough to conserve the ball very well following Rodman’s pass and oblige her direct opponent into committing a heavy mistake at a dangerous time.

Sullivan was successful in scoring the penalty and the match became much more intense for both teams as Washington Spirit were dominant in this part of the game by keeping possession and trying to reach Chicago Red Stars’ goal repeatedly. They alternated between crosses towards the penalty area and penetrations from the wings but couldn’t score in regular time as both teams’ players looked very tired.

Nevertheless, Washington Spirit were better in this period and proved that at the start of extra-time by scoring a well-played action with Rodman receiving the ball and dribbling on the left-wing before spotting O’Hara intending to advance behind her marker and towards the goal and crossing the ball perfectly towards that spot to make the ball meet with O’Hara’s penetration. O’Hara’s off the ball movement and Rodman’s great vision and execution of the cross made this goal a very beautiful one and therefore Washington Spirit’s triumph a deserved one. 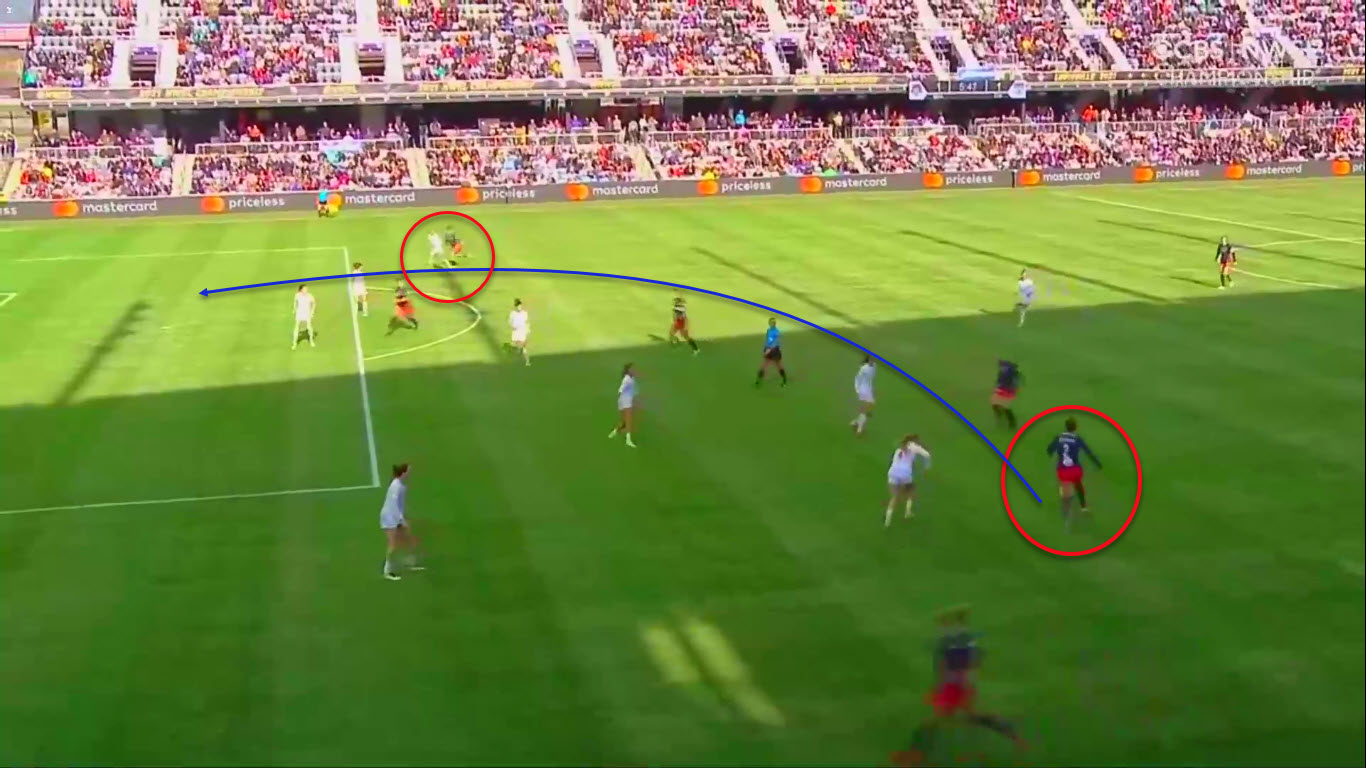 This match proved once again that the NWSL is continuously progressing despite all the issues surrounding the league and that this league’s level is no less than the big European leagues. Chicago Red Stars should be proud of the achieved results of this season especially when considering that they excluded a team like Portland Thorns in the semi-finals and were also about to win in this final if they didn’t commit some defensive mistakes at the end of the match. The team lost most of their efforts within the first half as they were also prevented from the services of their two key attacking players since that moment. They should build on what they achieved for next season in order to lift the trophy in the upcoming seasons.

While for Washington Spirit, it should be said that the team knew how to earn their win despite not being essentially good enough at first. Yet, they did what it takes to turn the table by scoring two goals with Rodman and O’Hara being the protagonists of this final.