UEFA Women’s Euro 2022 kicked off at Old Trafford on Wednesday, July 6 with an opening match between England and Austria, a solid tactical clash which ended with a single goal from Beth Mead. This game is directly related to both Norway and Northern Ireland since the four teams share the same Group A. Therefore, the battle between England and Norway has already started and at the moment both teams were able to pass their first test.

Norway succeeded in beating Northern Ireland 4-1 in a match that saw the Norwegians perform very well, especially from an attacking perspective. This win puts both England and Norway in the top two spots with a slight advantage for Norway in terms of goals. Norway will have to continue believing in their abilities and perform well in order to protect their lead of the group when they meet England in their next match, knowing that the mission will be complicated for both teams.

Afterwards, the winner of England versus Norway will surely have a great advantage over the others to finish at the top of the group, and that’s why it will be a decisive match. At the same time, Northern Ireland will have to face Austria in their upcoming match and they will have to win in order to make up for their first loss.

In this tactical analysis, we will focus on analysing Norway’s performance and tactics in their match against Northern Ireland in order to explore their strengths and shed some light on what went wrong.

On the other side, Northern Ireland opted for the 3-4-3 formation with Jacqueline Burns as a goalkeeper, Julie Nelson, Sarah Mcfadden and Kelsie Burrows in defence, Abbie Magee and Demi Vance as wing-backs, Nadene Caldwell and Chloe McCarron as central midfielders while both Lauren Wade and Simone Magill played on the wings and formed the attacking trio with the striker Rachel Furness. 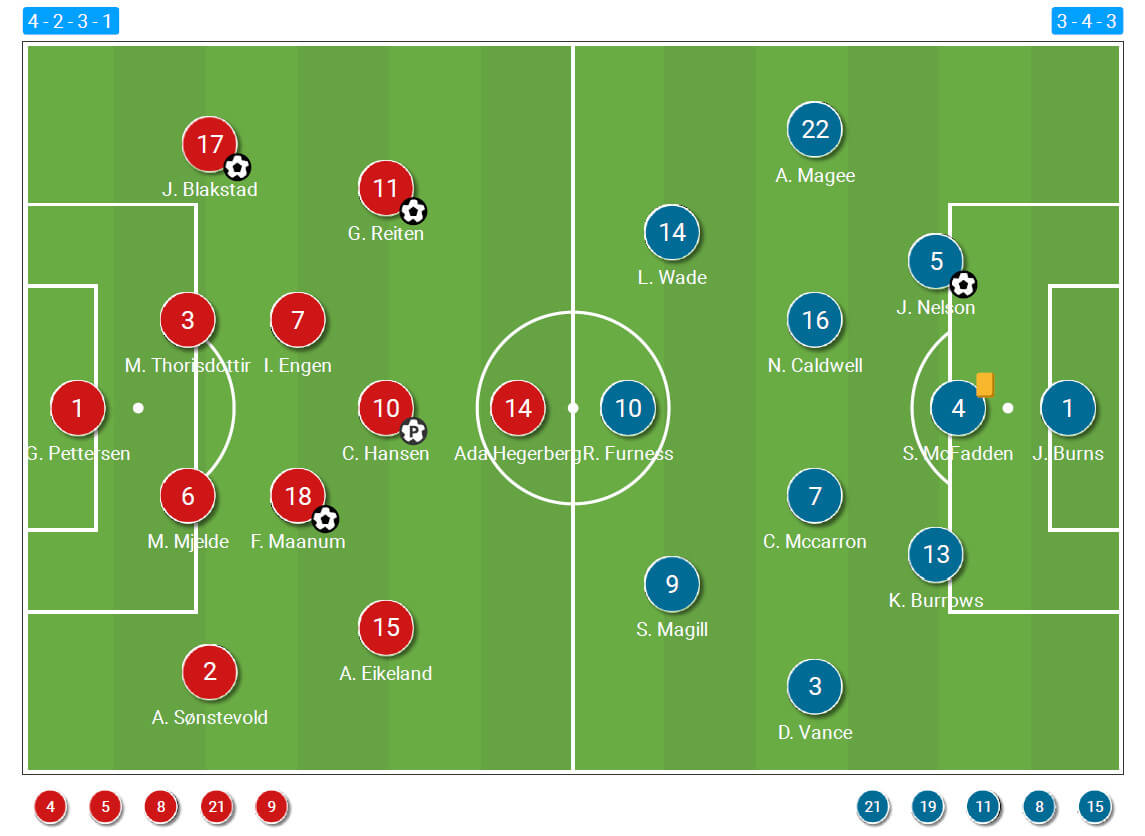 Norway started the match with a clear intention to play attacking football and press high on Northern Ireland in order to have more possession and threaten their goal extensively as early as possible. They were able to shoot 19 times with 10 shots on target as they had 60.36% of possession, which proves Norway’s relative domination in this match. What is striking though is that Norway were not good enough in duels and especially in offensive duels as they won just 37.8% of these.

This can work against Norway in the future but at the same time it highlights the fact that they mostly rely on key passes and movements in order to reach the goal. Also, Norway missed a lot of dangerous chances in this match and that’s where they can improve.

Reiten’s performance in this game stood out because her passing and vision were excellent as she contributed in most of her team’s attacking actions by providing key passes in dangerous areas. What was even better is that these passes were often from a first or a second touch. Such as in the following picture, she played a huge role on the left-wing alongside Blackstad in order to serve her teammates near or inside the box. 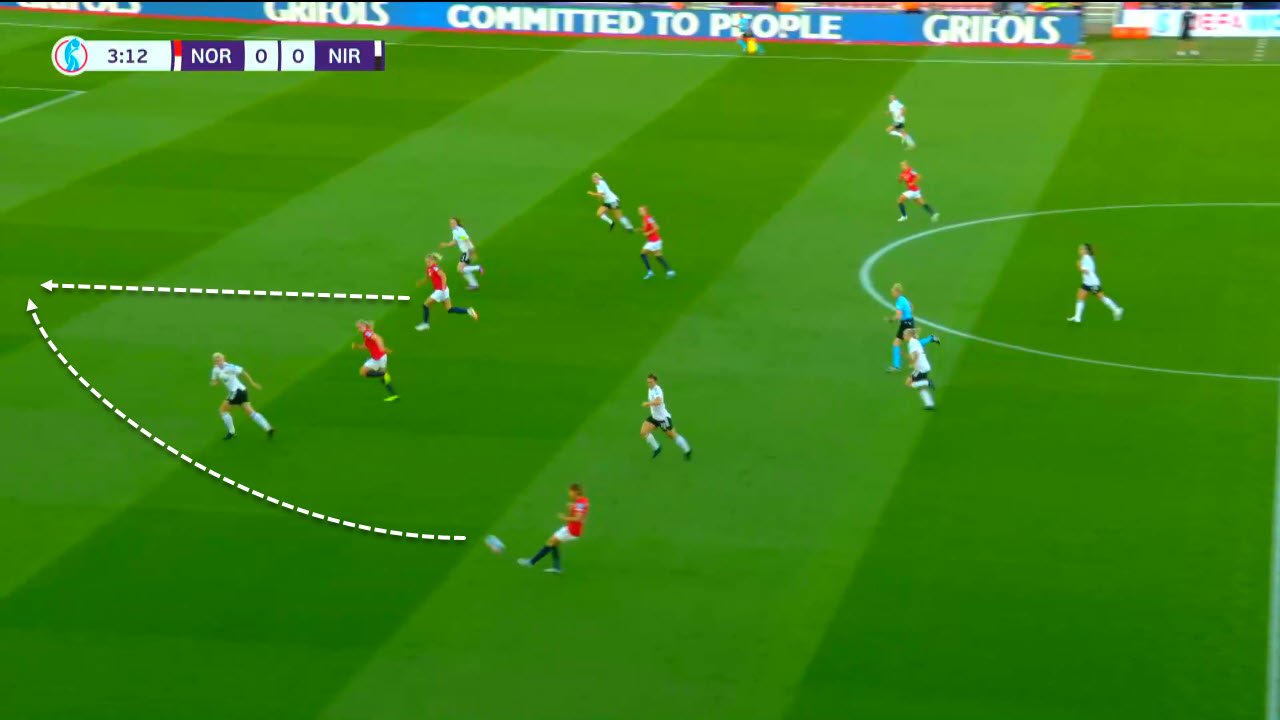 A few minutes later after the mentioned chance, Reiten was at the heart of Norway’s first goal when she received a pass between two Northern Ireland players and immediately gave a through pass to Blackstad who was waiting on the left-wing while being unmarked. The quickness with which Reiten analysed the situation, identifying her teammate and executed the pass were crucial to completing the action with success. This means that if Reiten took a bit more time to notice Blackstad and give her a pass, the latter wouldn’t have found enough space for shooting and would have already been marked. 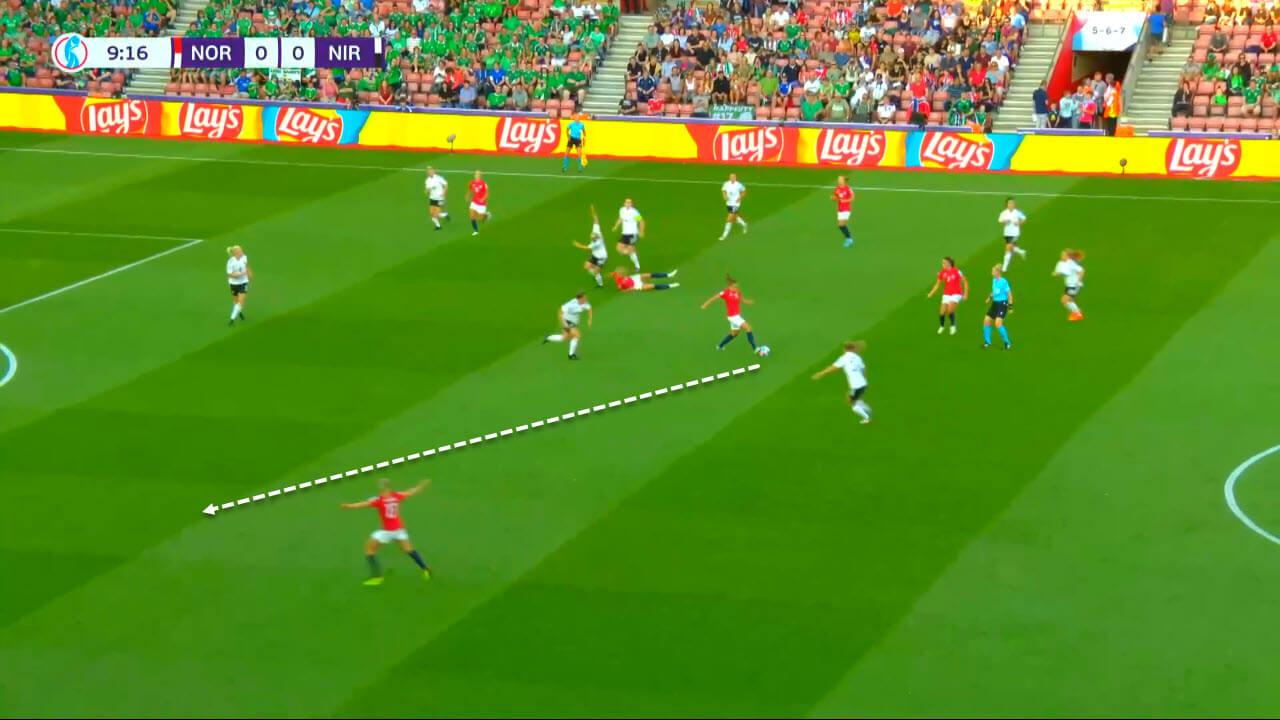 Reiten was also able to score a direct free-kick as well as she gave an assist to Hegerberg for the fifth goal too, and this proves the player’s importance for this Norway side even further. The fifth goal in particular shows exactly how Norway’s attacking players have a lot of chemistry between each other and they were able to transform that chemistry into quick actions and short passes that lead to goals. It needs to be said that this goal was also preceded by a one-two combination between Reiten and Hansen, which highlights this chemistry and tactical intelligence even further. 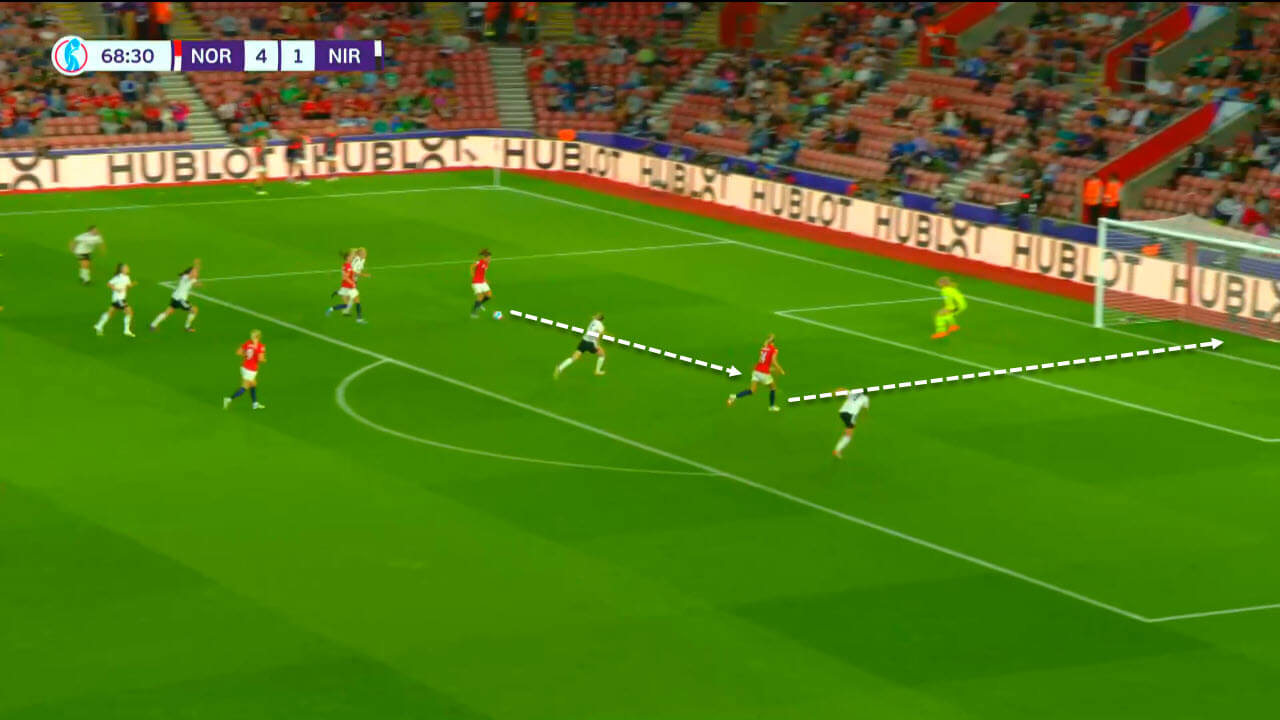 Moreover, Maanum’s shots from distance were excellent and helped Norway get more confidence and attack with more determination and less stress. The player was also able to score Norway’s second goal thanks to the team’s high pressing on Northern Ireland’s defence in order to disturb their building from the back. Maanum herself was successful in intercepting the ball from her direct opponent before providing a pass to Hegerberg who was intelligent enough to give the ball back to Maanum who was in a better shooting position than her. 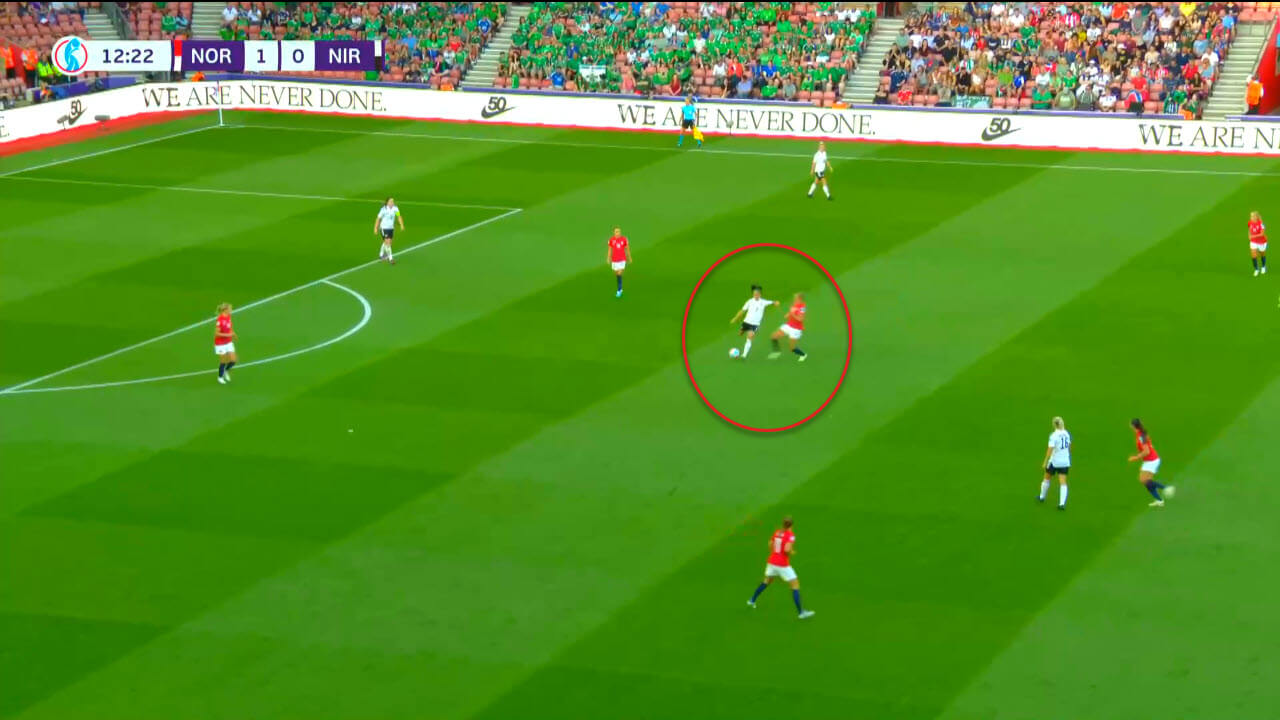 Hansen’s impact in this match was also fundamental as she had the liberty to attack both from the right and the left-wing, relying on her excellent dribbling skills and on her shooting abilities with both feet. So in addition to playing in the middle, she often moved to both wings and cut inside in order to find shooting space for herself or provide crosses/passes to Hegerberg or to Reiten who often advanced towards the box during attacks. Norway rely on these ideas a lot and they proved successful against Northern Ireland. Yet, they will have to diversify their attacking plans even further in the upcoming games in order to surprise England and Austria. 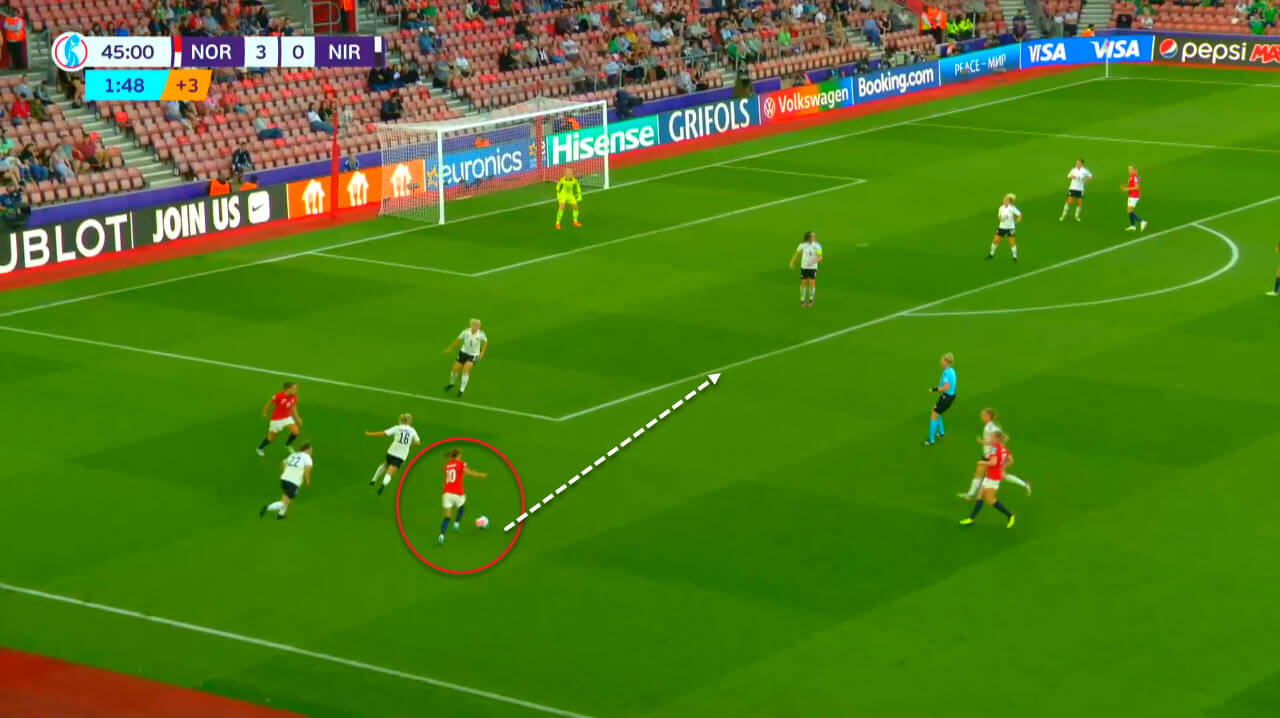 Generally speaking, Norway were solid enough in defence and didn’t concede much to Northern Ireland. They conceded 6 shots against with 2 being on target as they won 56.67% of the defensive duels. Norway were able to stop Northern Ireland’s threat on most occasions. However, the team was not convincing in terms of aerial duels as they conceded a goal due to poor set-piece marking, like you can see below. The defence needs to be more attentive against more dangerous teams in order to avoid conceding goals from such situations. 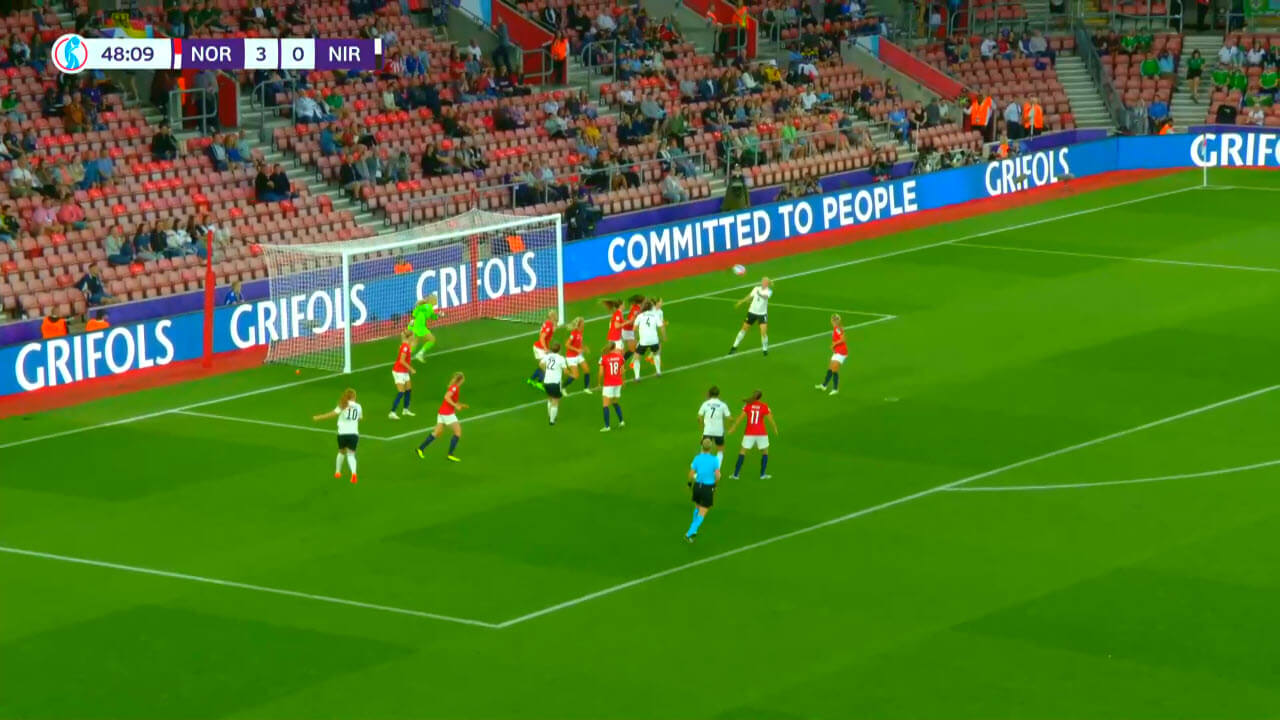 Norway must build on this defensive performance and improve their weaknesses in the air as soon as possible especially when knowing that they will be facing excellent players in aerial duels such as Ellen White. Therefore, they will need to be much more aggressive and reactive when defending crosses or set-pieces.

Norway’s first match of the tournament witnessed the best possible start for the team despite the conceded goal. As the analysis showed, they kept their balance throughout the match and used their attacking weapons very well to disturb Northern Ireland.

On the other hand, Northern Ireland shouldn’t be ashamed of their performance as they did their best to stop Norway but the level of players created the difference at the end of the day. At the same time, the group stage has only begun and the team has got the time and the opportunities to defend their chances until the end and strive for points against Austria and England.