The MLS Eastern Conference playoffs have been lower-seeded teams upsetting the natural order of things. One of these teams has been expansion team Nashville SC. On Sunday evening they visited the Columbus Crew at their new stadium in Ohio.

In his first year at the helm in Columbus, Caleb Porter has revitalized the Crew. After an incredibly subpar 2019 where they won six lost five and tied six, Columbus finished in fourth at the end of the 2020 regular season. Steadying a club that was on the verge of being moved away from Columbus, Porter has brought the Crew back to where they belong in the league.

Nashville SC has quietly set a new standard for expansion teams to follow. Retaining their coaches and core group of players from their USL days, Nashville has done a great job building their squad. With veterans such as Walker Zimmerman, Dax McCarty and keeper Joe Willis, the Music City team has a balanced squad that has shown it can go toe to toe with the best.

Porter lined his team up with Zardes as the true target man, while MLS newcomer of the year Lucas Zelarayán would play between the lines as a second striker. Joining those two in the attack were wingers Pedro Santos and Luis Díaz. Between the four of them, they have 19 goals and 14 assists. Due to Eloy Room’s positive COVID test, Andrew Tarbell deputised in goal. 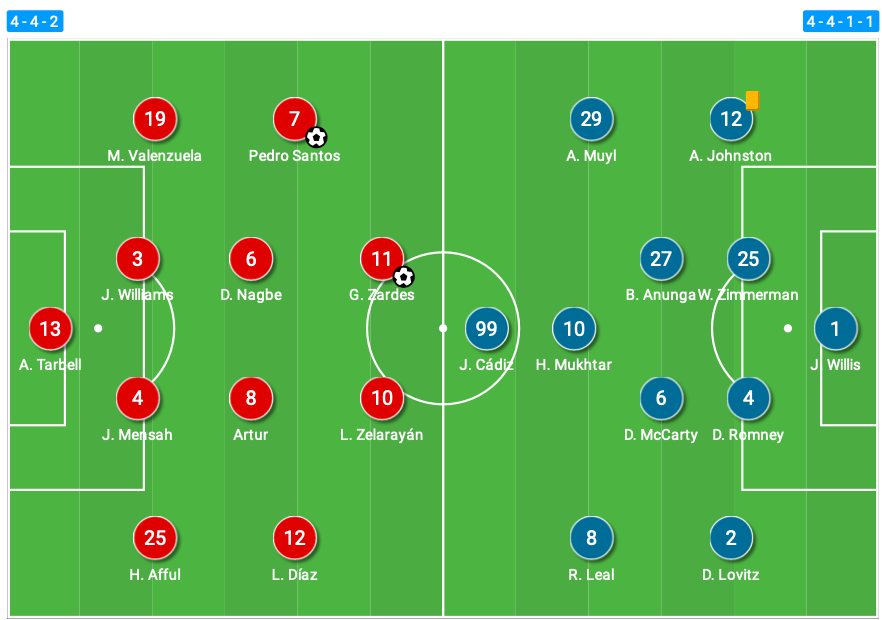 Gary Smith sent out the usual suspects for the Music City side. Blending a solid group of attackers such as Hany Muhktar and Jhonder Cádiz with stout defenders led by Walker Zimmerman, Nashville were incredibly balanced. Alex Muyl and Randall Leal were wingers who would invert, while Dax McCarty and Brian Anunga operated as the team’s engine in the midfield.

When Nashville was not in possession of the ball, they looked to cut off passing lanes and force Columbus to slow the game down. Similarly to Atletico Madrid, Nashville their two compact lines of four to congest the middle they forced the Crew to play wide. 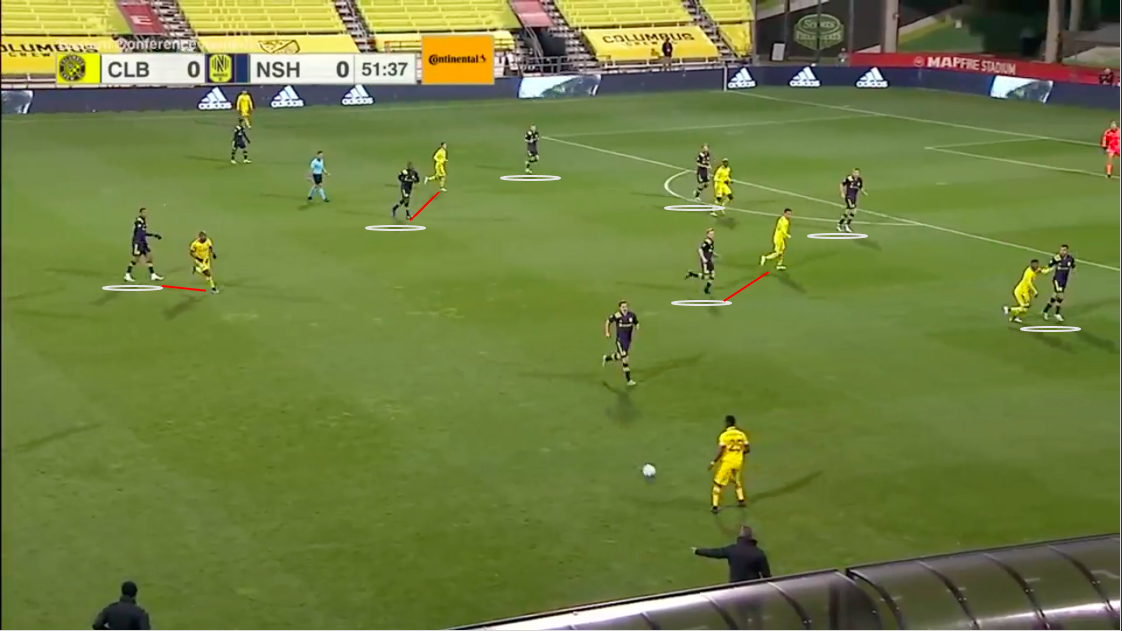 Above we can see an example of Nashville’s defensive positioning. As the ball is wide, Muyl is pressuring while McCarty tracks Zelarayán’s run. Cádiz is shadowing Nagbe, while Anunga uses his cover shadow to cut out Santos. The way that Muyl applies pressure forces the right back into a backwards pass. 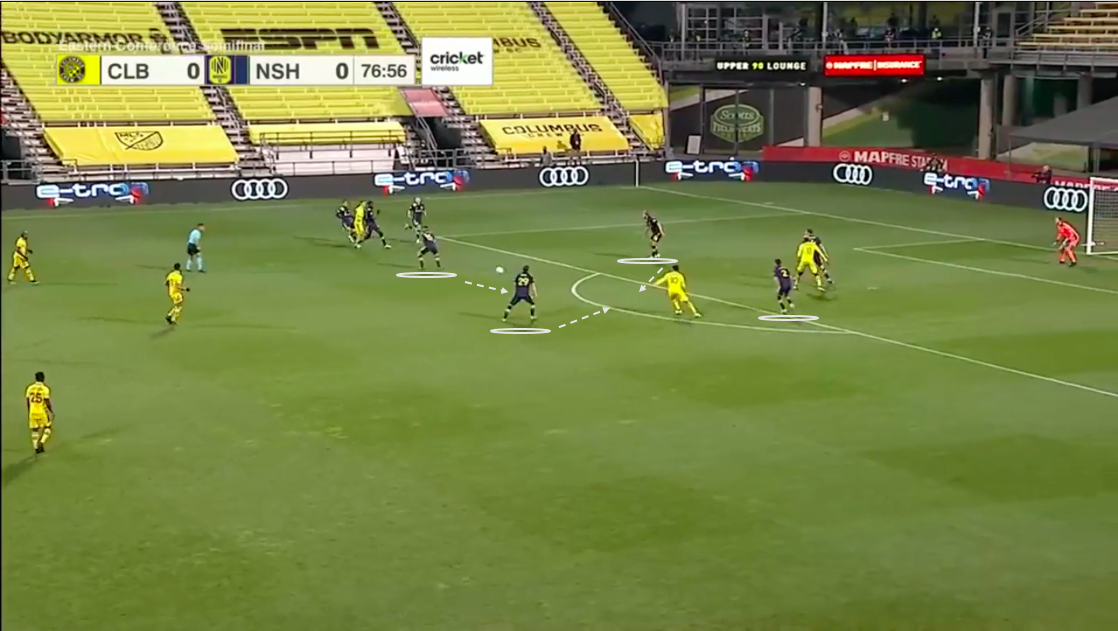 On the rare occasion that a pass would find a Columbus player between the lines, the Nashville defenders would press heavily and force them out. As Zelarayán receives a pass, we can see that Muyl and Lovitz are close enough to immediately apply pressure. 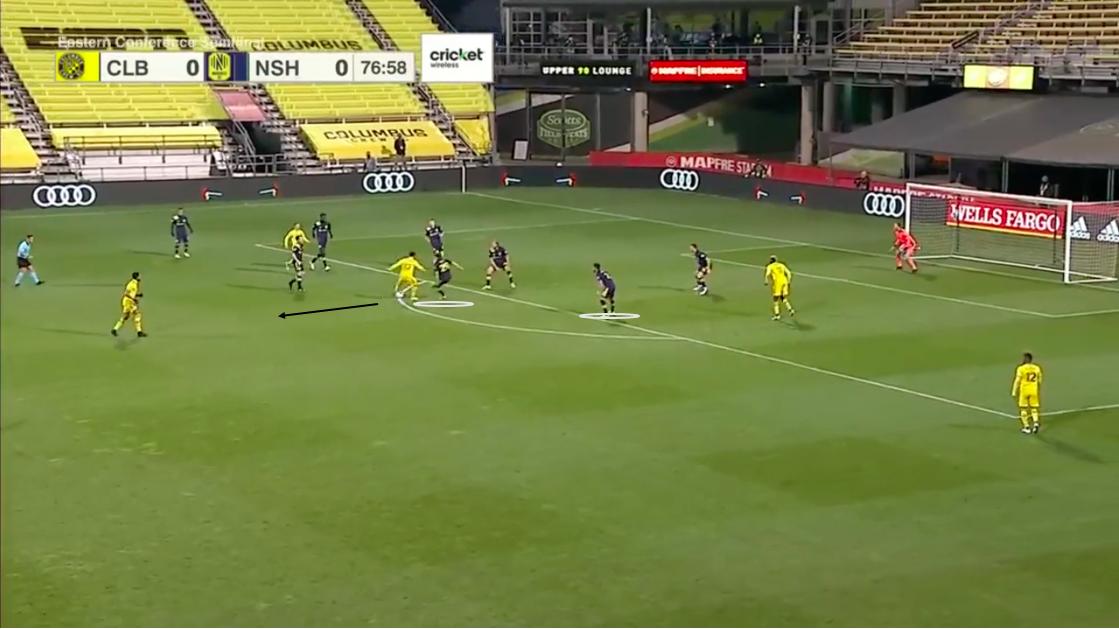 Instead of trying to tackle and win the ball, Muyl intelligently positions himself goalside to force the midfielder backwards. McCarty aids the defensive effort by doubling the pressure, while Zimmerman provides cover in case the winger gets beat.

While their approach was patient, Nashville was able to put in the tackles once the Crew either came centrally or attempted to dribble in the flanks. Throughout the game Nashville put in 19 tackles, winning 113 duels.

In the next section of the analysis, we will look at the Crew’s attempts to play through the Nashville defence.

As the Barcelona of old, Columbus looked to patiently move the ball side to side to find pockets of space to progress the ball. They would also look for diagonal switches to the weak side after overloading one side. 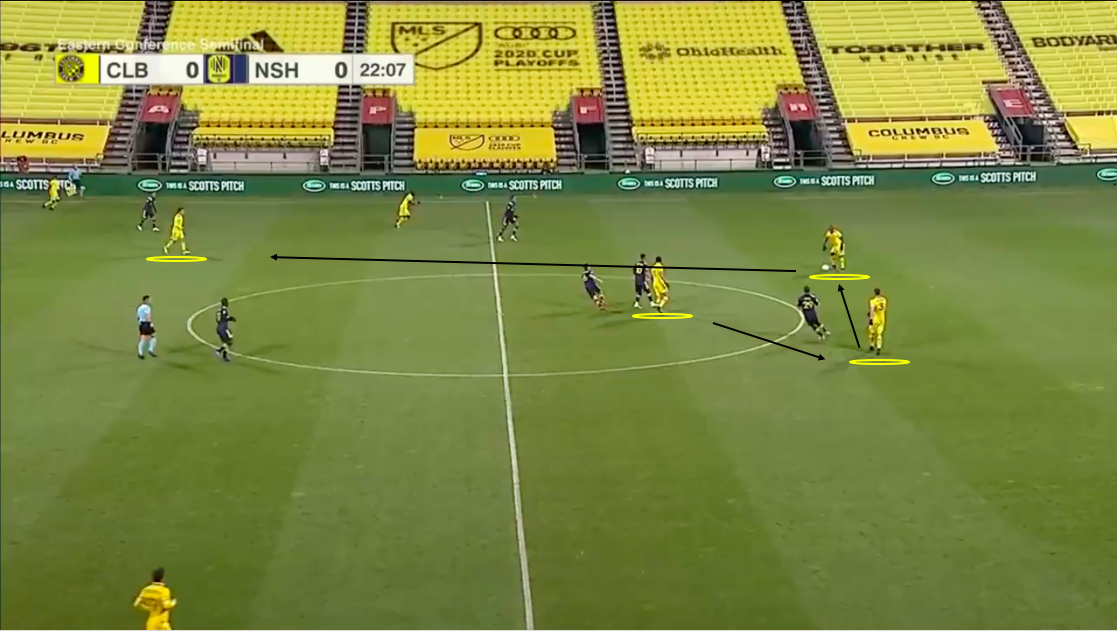 Instead of playing wide, the centre backs adopted a more narrow positioning in possession. One of the midfielders from the double pivot would also remain near to aid in the build-up. This tactic would draw out the midfielders to press the ball carrier as we see above. 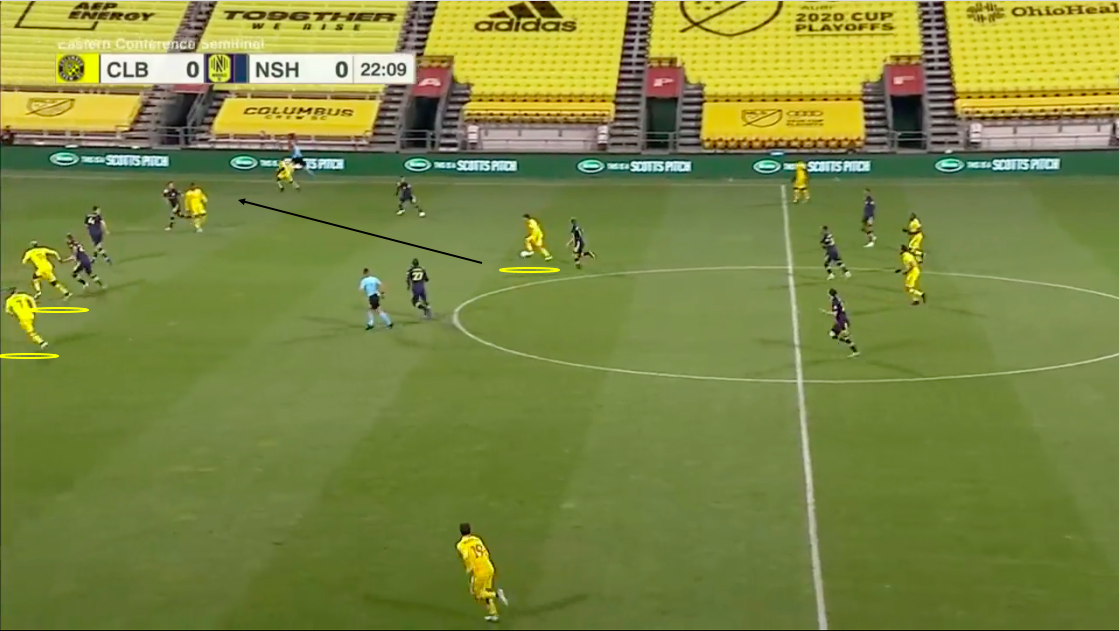 Eventually, the space between the lines would open up for Zelarayán, and from there, the Crew would increase the tempo of their play. In this sequence, the Argentine is able to turn and play quickly to Afful on the right side. 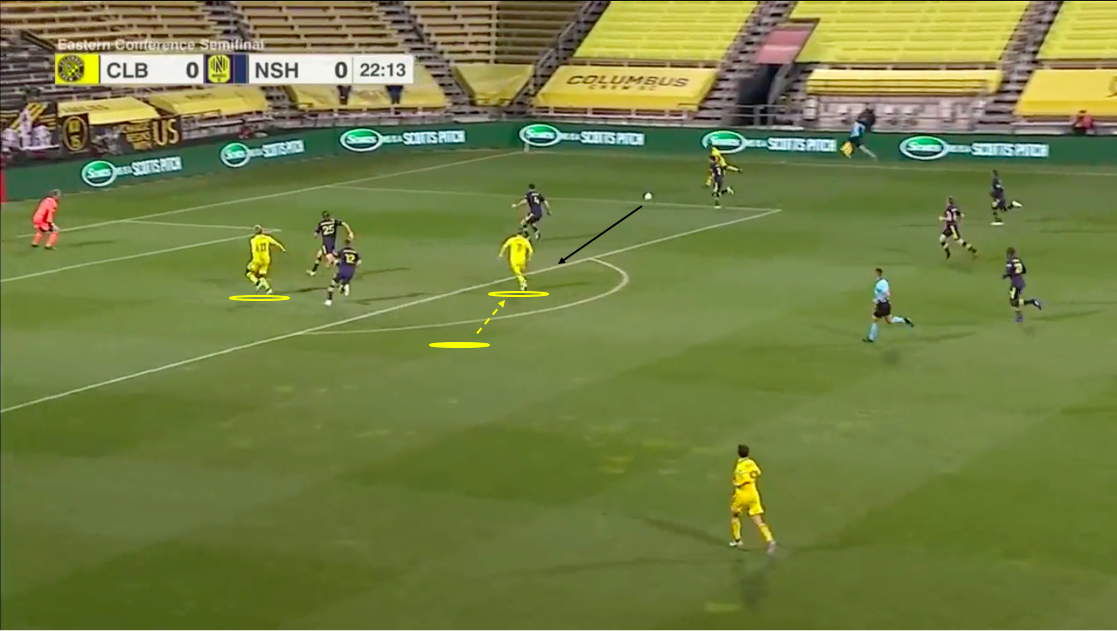 As this is happening, Zardes begins his run while staying in the defender’s blind spot while Santos stays between his teammate and the outside back. Zardes’ run drags the defenders towards the six-yard box, opening a passing lane for Santos. Although Afful is able to accurately cross to the Portuguese winger, Santos shoots over.

The Crew’s insistence on this tactic is clearly shown by their 23 attempted crosses. Due to Nashville’s defensive discipline, they were only able to connect on five.

The visitors’ double pivot worked in a different manner than Columbus. Instead of one dropping between the centre backs and the other playing higher, they both remained near a similar line. Always operating between the Crew’s forwards and midfield line, McCarty and Anunga provided support to the attacking players. By bouncing the ball back and forth with the centre backs and outside backs, the midfielders were able to create space in the wide areas. 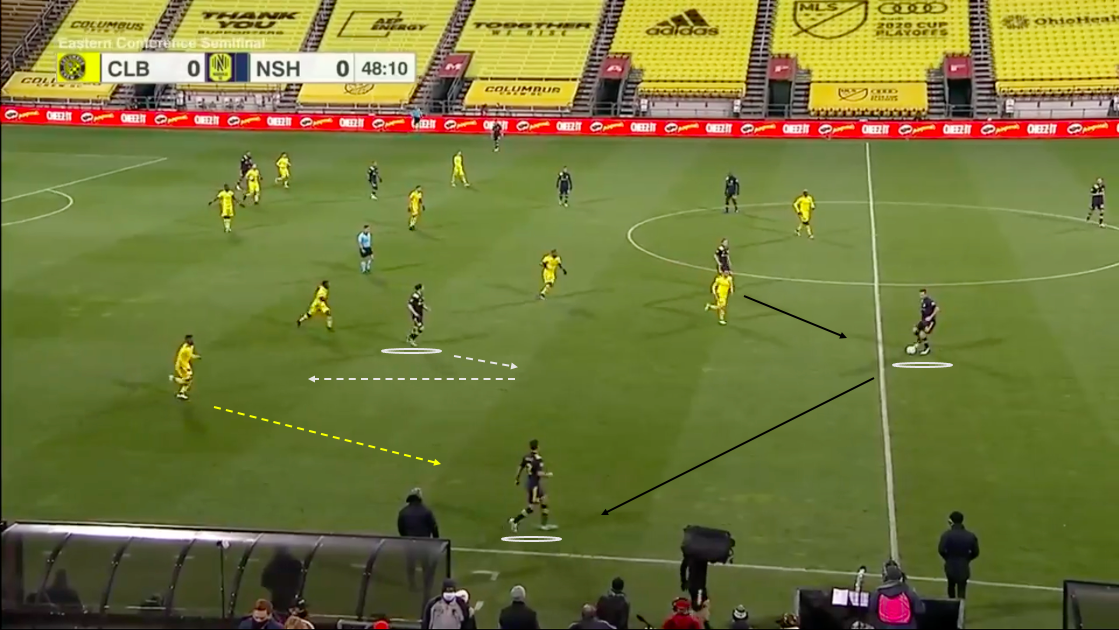 Using the outside backs to provide width, Nashville’s wingers would utilize off the ball movement to create 1 v 1 situations. Above we see an example of this tactic in motion. After receiving the ball from McCarty, Romney is able to play towards Lovitz on the left flank. 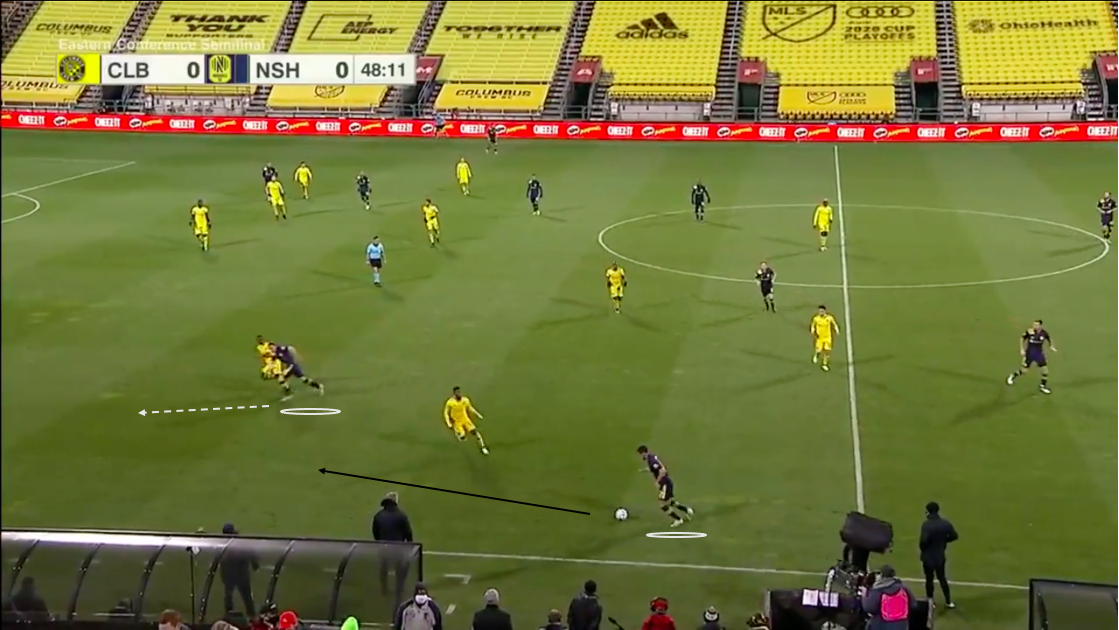 Muyl begins to check for the ball, drawing his defender and another towards his left-back. The moment Lovitz receives the pass, the right-winger cuts back and runs down the line. Lovitz quickly plays him through.

How the Crew won

While the Crew were unable to find a way through in regular time, they killed off the game in extra time by playing quickly through Nashville’s rare disorganization. After a throw-in makes its way to Zelarayán, the defenders begin to converge on him to win the ball back. 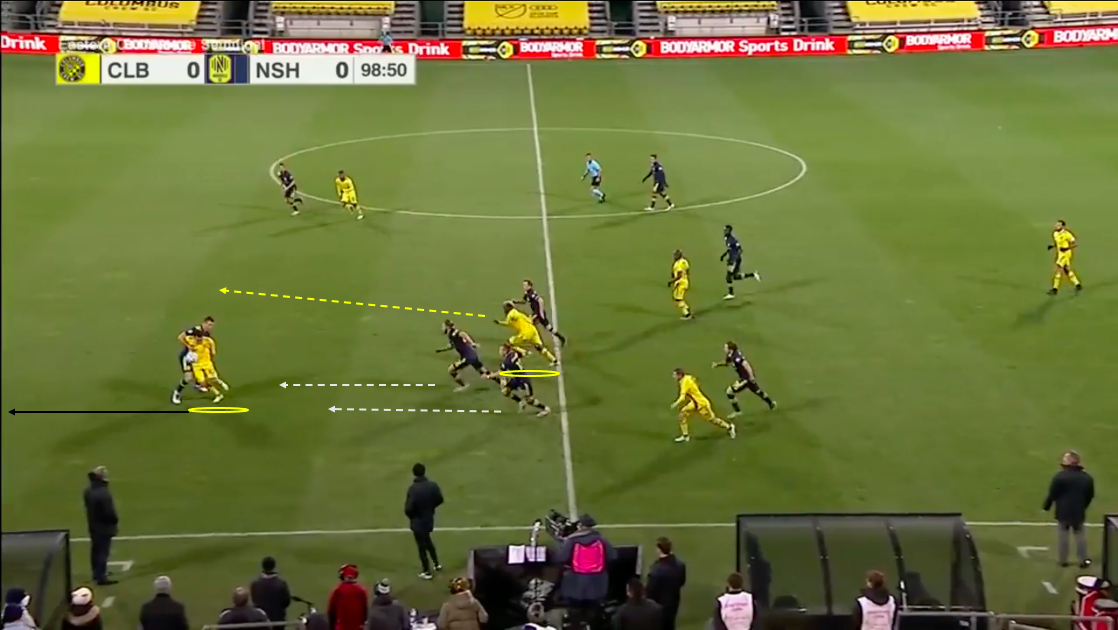 Zardes intelligently gambles and takes his run in the halfspace towards the goal line. After receiving the pass from his teammate, Zardes is in behind the defence. 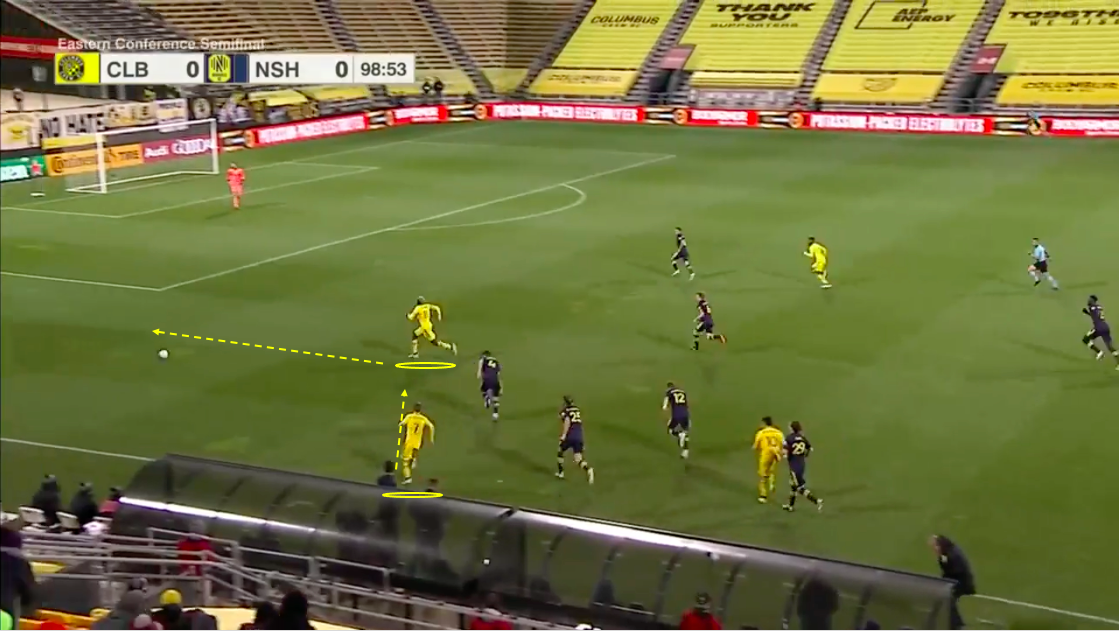 Santos is able to avoid being marked by taking his run from the touchline to the penalty spot, where he finishes the cutback. This tactic keeps the Portuguese winger in the defenders’ blindspot. 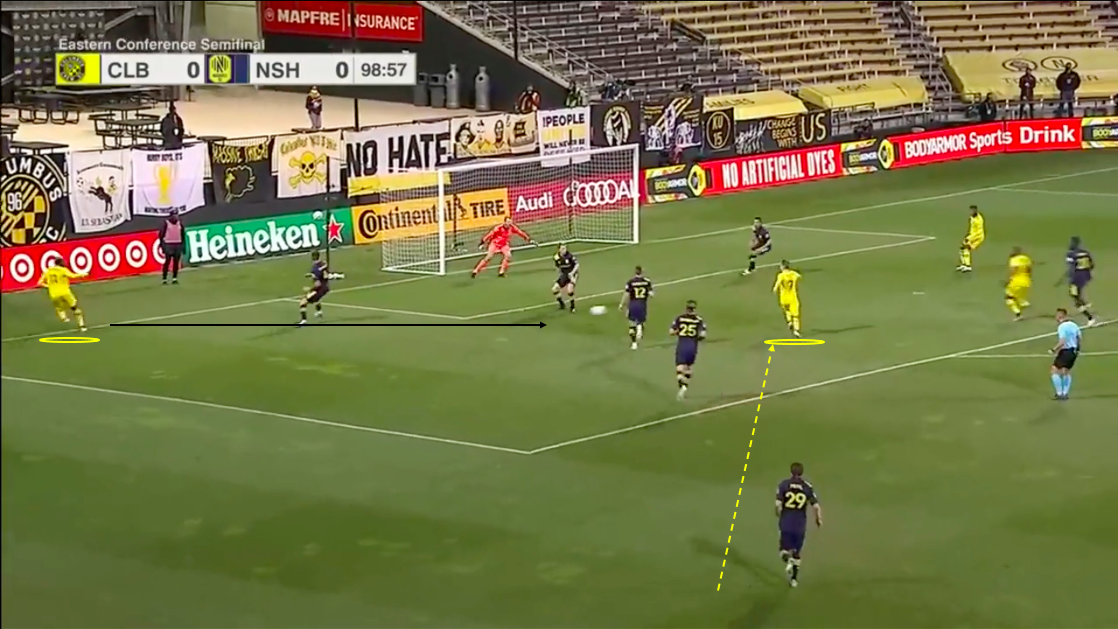 In the build-up to the second goal, Nashville was using Zimmerman as a target, in a manner similar to Real Madrid with Sergio Ramos. Nagbe is able to find Zardes after a corner is cleared. 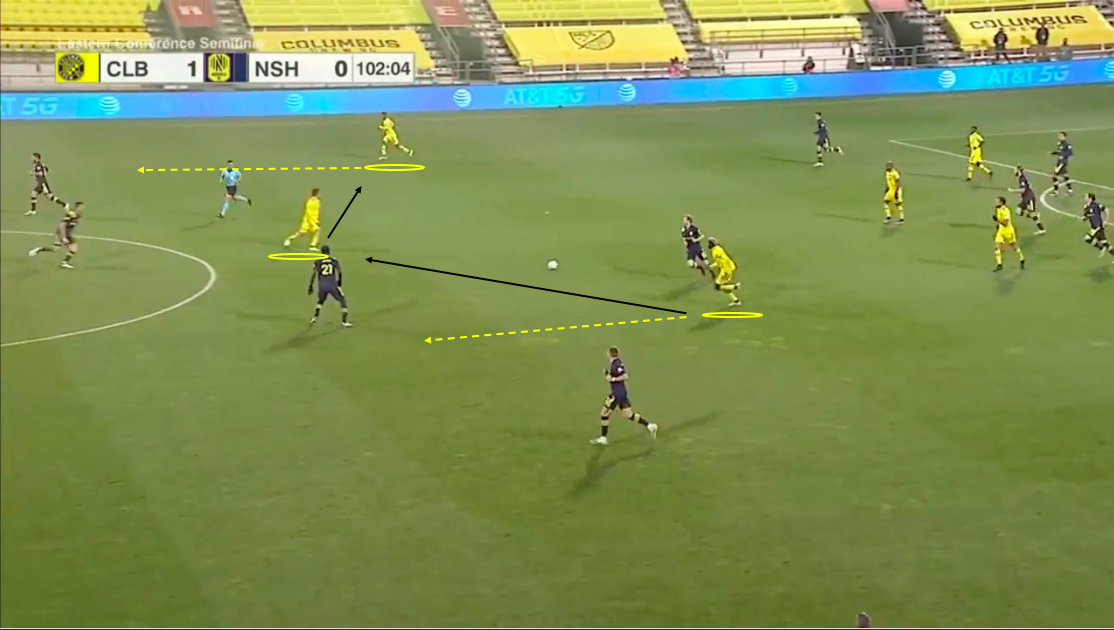 Now on the counter, Zardes is able to help the ball get the Díaz on the flank. Again the striker attacks the space where Zimmerman would occupy in the defence. Díaz spots his run and plays a killer through ball, creating a 1 v 1 with Zardes and the keeper. 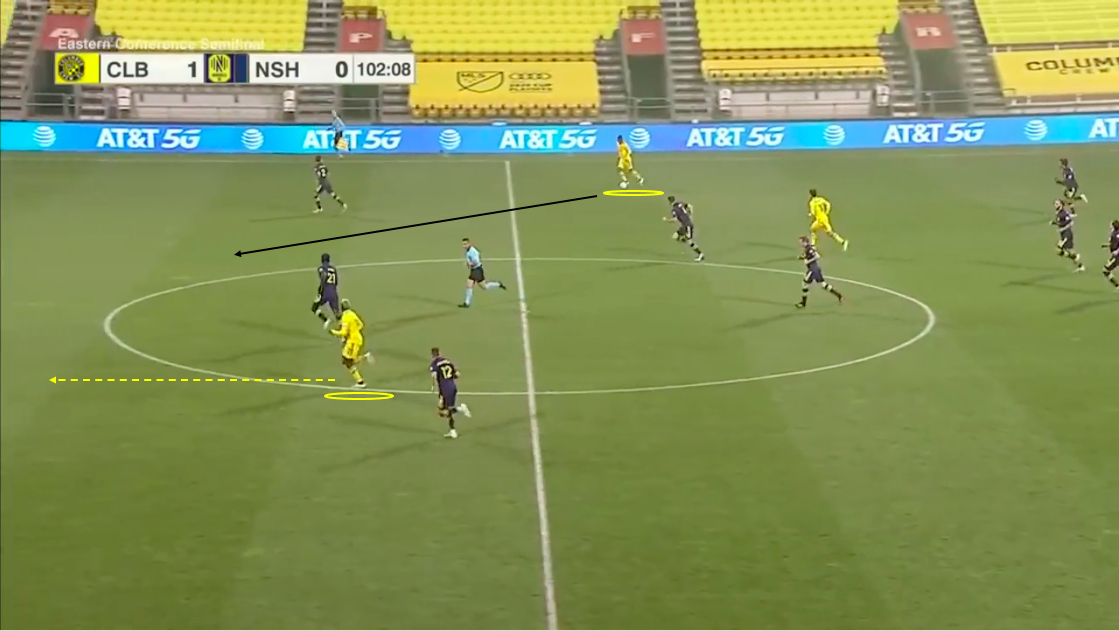 Columbus was able to clinically punish Nashville in these two moments and advance to the semi-finals of the playoffs.

The tactical battle between Porter and Smith finished with a strikers masterclass from Gyasi Zardes. The work that Gary Smith has done with Nashville has not gone unnoticed, and the Tennessee side will only go up from here. Up next for Porter and the Crew is a meeting with Bruce Arena’s New England Revolution. The Eastern Conference final will pit two of the original MLS clubs in a match that no one really expected.