Paris Saint-Germain drew 3-3 against Monaco in what is undoubtedly a highly exciting and entertaining match in Ligue 1. Both teams traded goals but neither was able to outscore the other.

This was Roberto Moreno’s Ligue 1 debut as a Monaco manager but he’s immediately faced with a mammoth task in Paris Saint-Germain. The Spanish coach was able to bring his side to an impressive victory in his first match in charge against Reims in the round of 64 of Coupe de France but it will be a much different game against an offensively aggressive PSG.

Thomas Tuchel’s side were unbeaten since matchday 13 in Ligue 1, maintaining an outstanding six-match winning streak.

In this tactical analysis, we’ll take a closer look at both team’s tactics and the key statistics in this tightly-contested match. 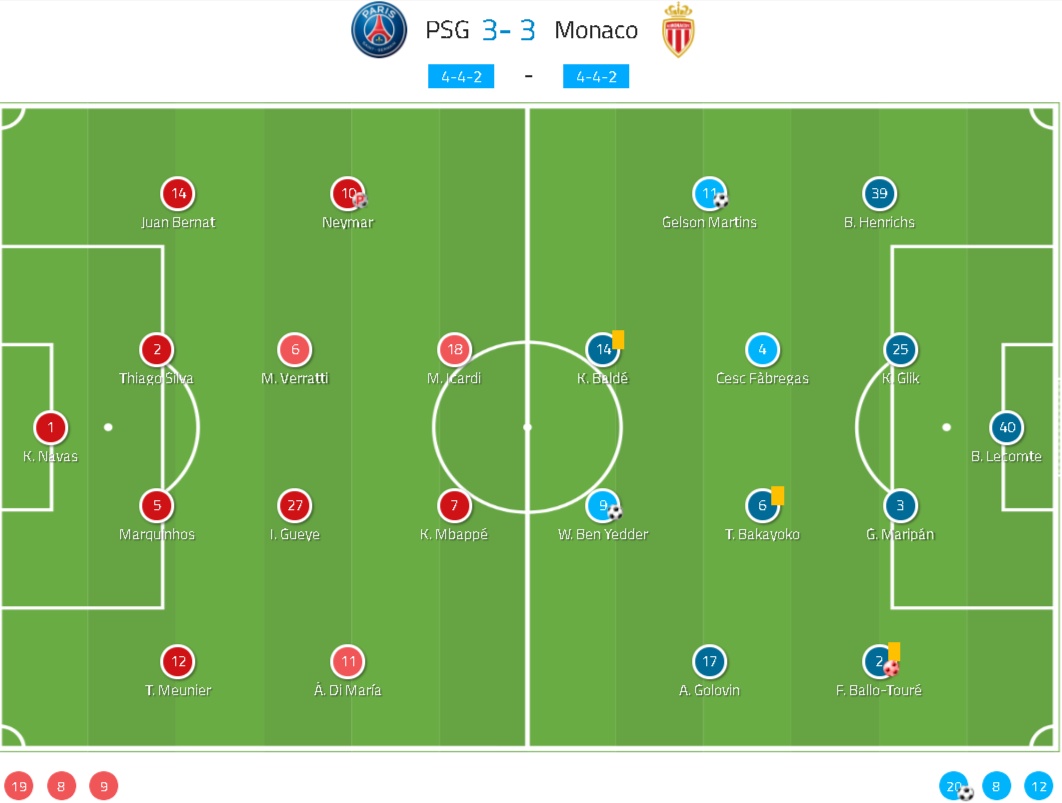 Tuchel deployed his team with 4-4-2 once again in this match having used the same system in their previous game as they thrashed Saint-Étienne 6-1 at home. Not a lot of tactical tweaks can be seen as Paris Saint-Germain played their usual attacking and aggressive football. However, they did seem a bit more cautious due to Monaco’s pace in transitions. Only two new faces came in the starting line up for this match with Keylor Navas and Thiago Silva back in the starting 11, replacing Sergio Rico and Thilo Kehrer respectively.

Moreno, on the flip side, decided to use a different system in this game, deploying his team in a 4-4-2 as well. In the previous game against Reims, Moreno used a 4-3-3 that worked well against the low-blocking side. Moreno maintained pretty much the exact same lineup as the last time out but some tactical tweaks can be seen in this game.

Neymar and co. started the game with attacking intent, quickly throwing a number of players inside the opposition half right after the game started.

As usual, PSG were quite patient with possession, rotating the ball around and waiting for a breakthrough to occur. They mostly utilised short passes and controlled with very few touches, allowing very quick combinations in tight spaces in the middle. 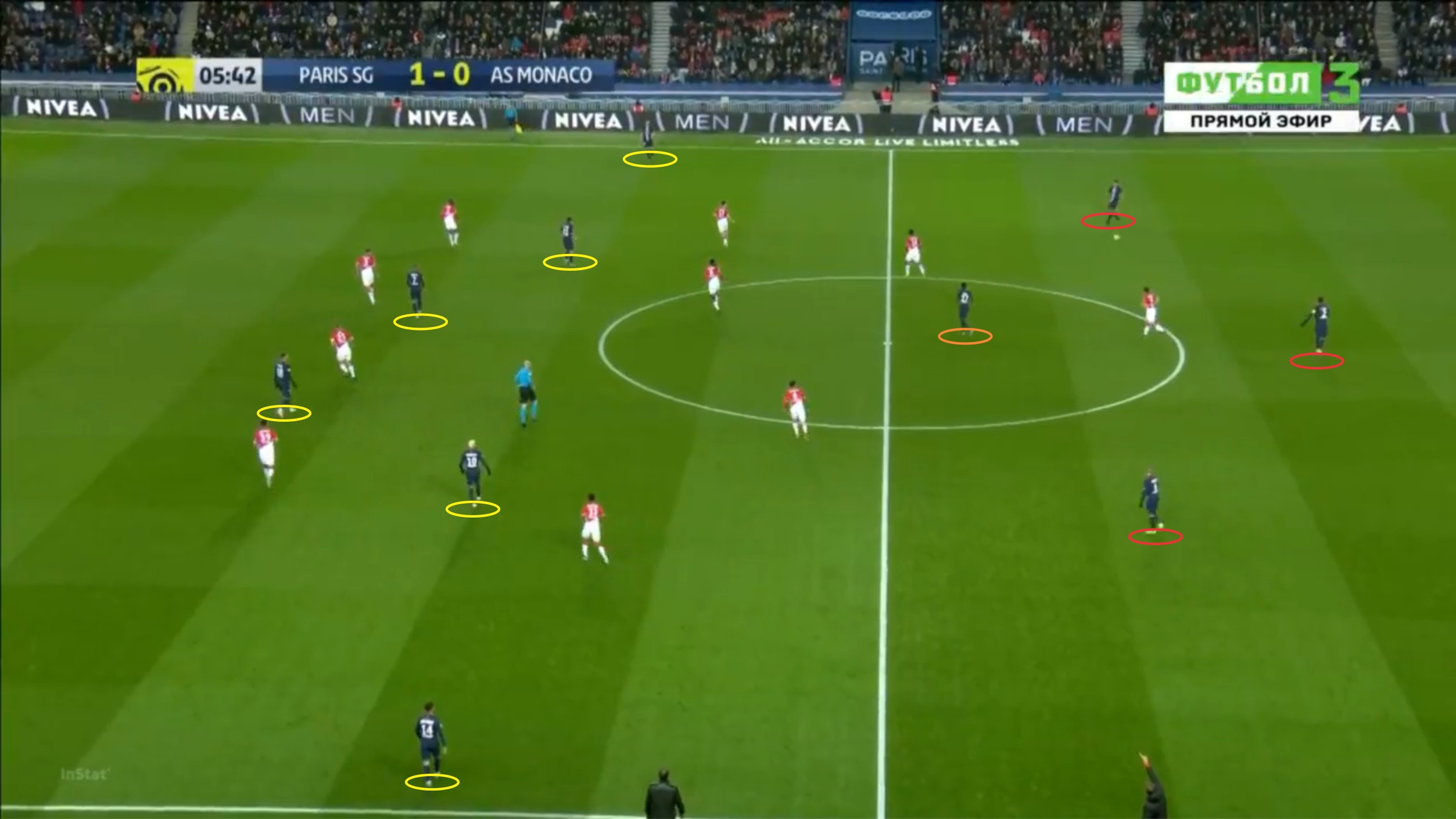 When in attacking phase, PSG would immediately create this 3-1-6 shape right from the build-up. In this match, Cesc Fàbregas seemed to be given the task to tightly mark and actively follow Marco Verratti around. By dropping deep and sitting beside the two centre-backs as in the picture above, Verratti successfully freed himself from his marker.

Right from the start the two full-backs were already sitting high and wide looking to exploit the spaces on the flanks. Meanwhile, the two wingers mostly sit in the half-spaces, occasionally dropping slightly deeper to link play and/or progress with the ball. The two strikers upfront also had slightly different tendencies. While Kylian Mbappé often roamed wide and was much more dynamic, Mauro Icardi stayed advanced and central, posing as the fox in the box. 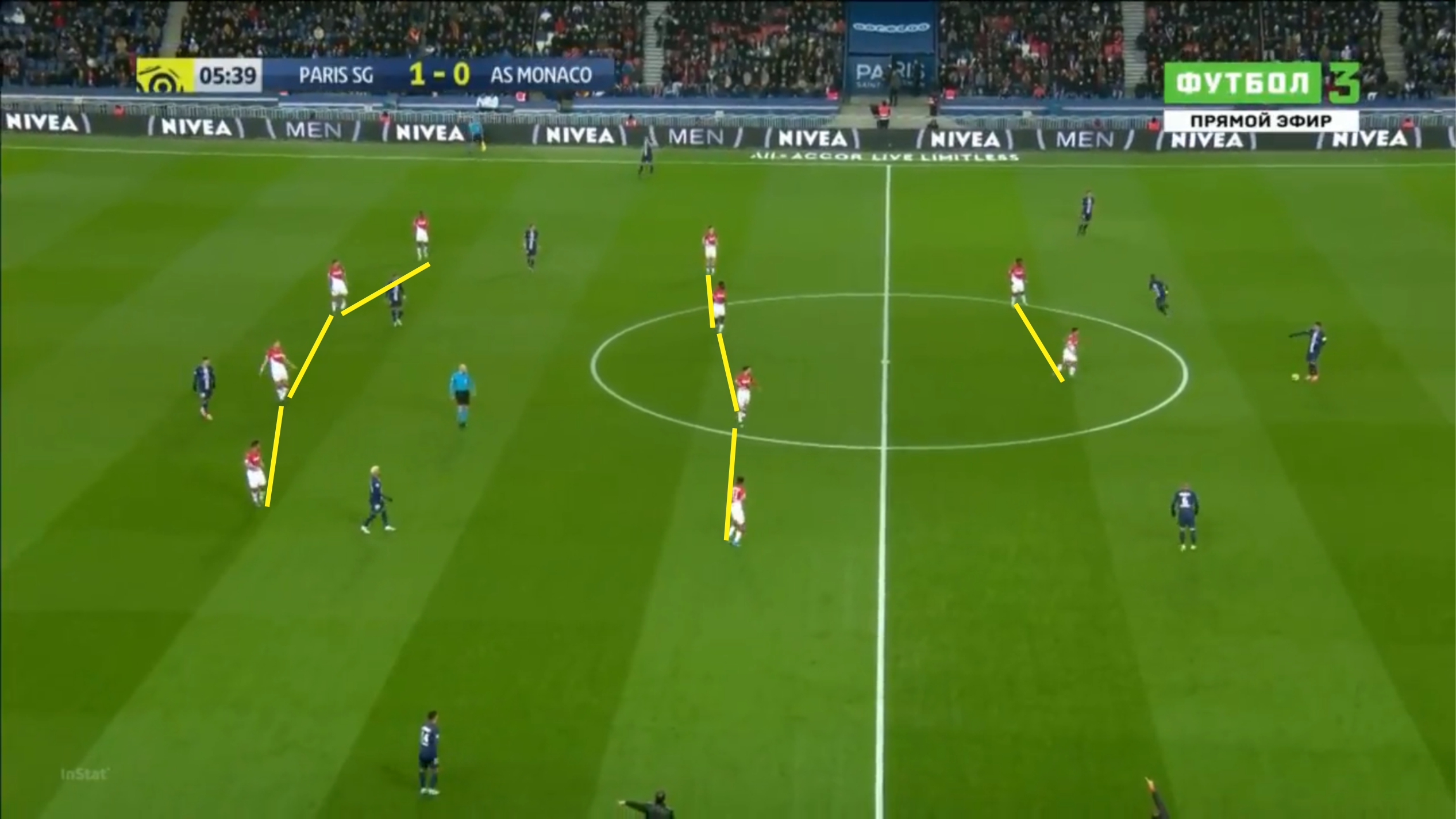 Moreno knew PSG’s tendency to play through the middle and breakthrough centrally, so he decided it would be best to counter that with a mid-low 4-4-2 block with narrow width.

In here, the first line of Monaco didn’t exert aggressive pressure towards the backline but would just casually close down the ball-carrier. Unlike against Reims, Monaco didn’t press high but would wait until the ball was moved wide or when the ball has entered the middle third before they triggered their pressing trap. This system allowed PSG to play around at the back but denying access to progress, especially through the middle. 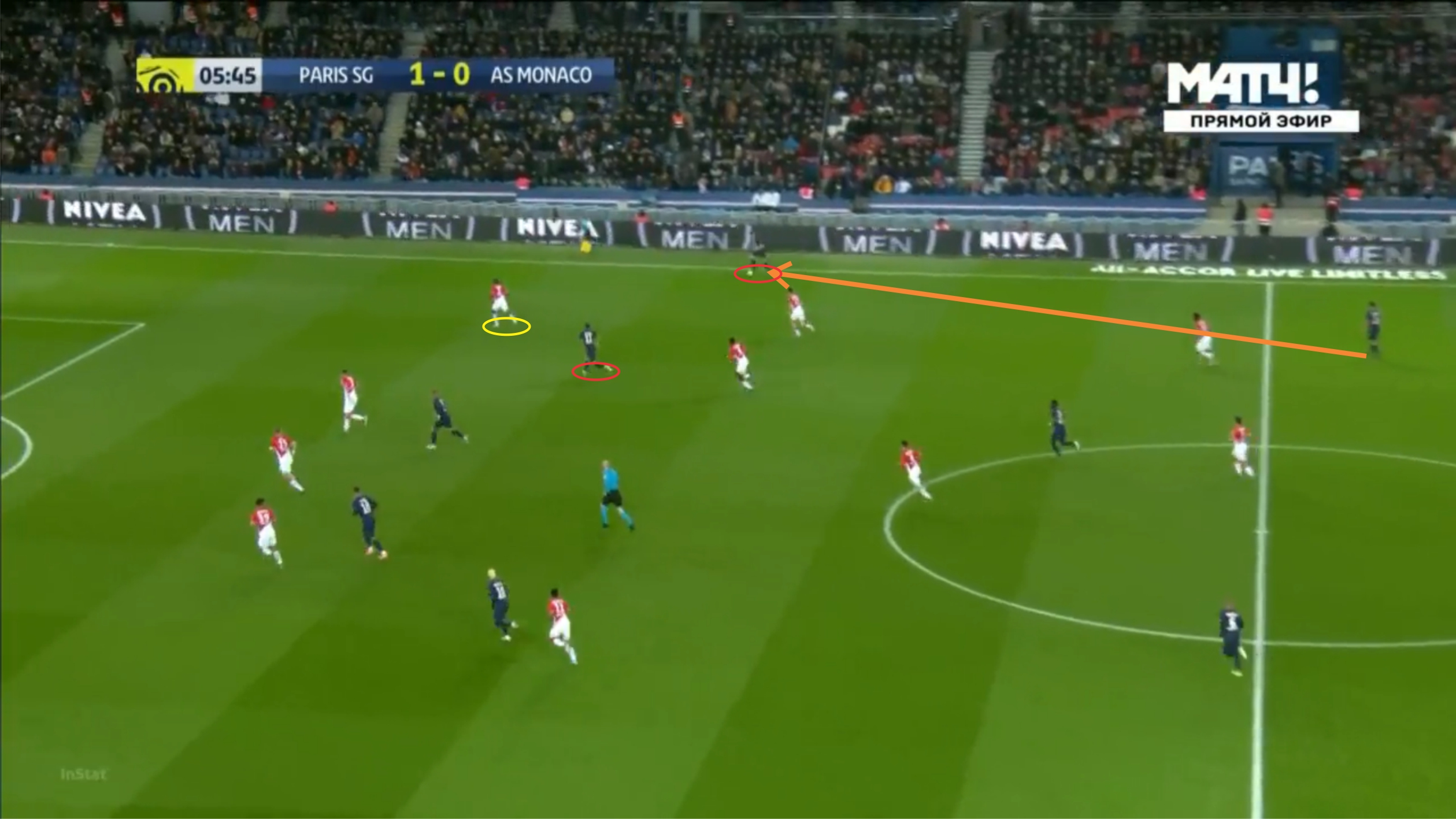 Despite being denied access to combine centrally, PSG managed to find a way around. Tuchel’s side would play down the line as in the picture above. When the PSG right-back received the ball, a 2v1 against opposing full-back was immediately created, giving PSG great advantage out wide.

PSG, however, had the tendency to play the ball inside rather than bring the ball down the byline and cross from there. In this particular scenario, Thomas Meunier had the opportunity to engage in a 1v1 duel or pass the ball towards Ángel Di María in the half-space but chose to execute the latter.

There were also some rather unique movements by Paris Saint-Germain though this didn’t seem to consistently occur. In this particular situation, the two strikers moved outside, both occupying nearby centre-back and full-back. This gave the two PSG full-backs near the touchline the licence to attack the width.

Meanwhile, the two wingers made an inward run from the half-space, rotating their positions with the two strikers. This put the Monaco backline under a confusing and a rather difficult situation as literally every PSG player could be a danger in front of goal and letting one of them free could prove fatal.

You could also see how the second line of Monaco started to get narrower and overloaded the middle which allowed Verratti the chance to supply the ball to the flanks. In this case, Verratti could have chipped the ball into space in front of him or played the ball to the left flank but chose instead to pass the ball onto the path of Meunier on the right flank.

PSG made most of their dangerous chances in this game from the half-spaces and the middle. 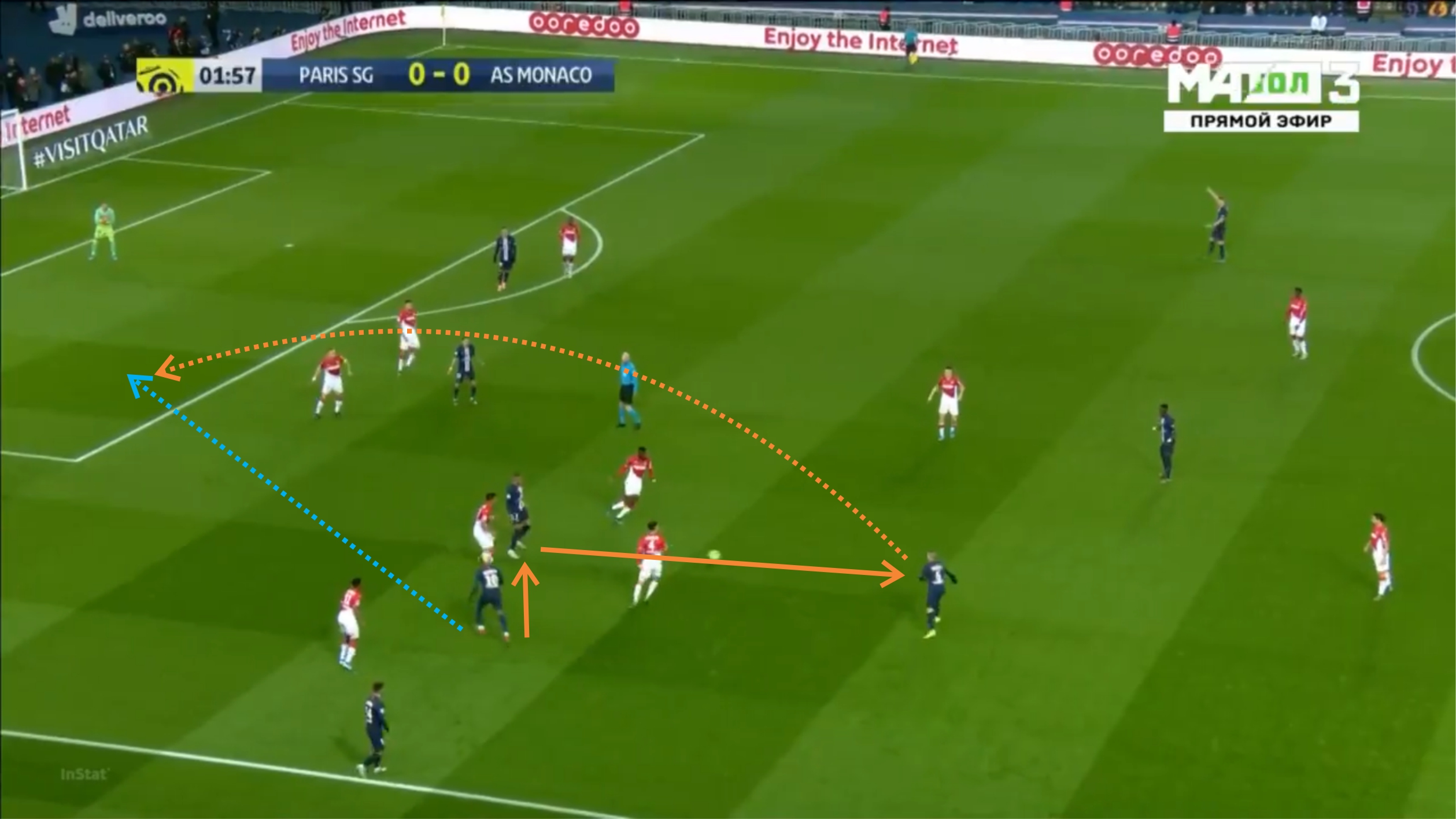 Above is the creation of PSG’s first goal of the game. Neymar played the ball to Mbappé before quickly rushing onto space behind the Monaco right-back (who’s now turned his focus to Mbappé). Mbappé gave the ball to Verratti and the latter in turn chipped the ball into the box after spotting the run of Neymar. The Brazilian winger then chested the ball down and put the ball into the net on the half-volley.

Unlike against Reims, this time Monaco were the side that got dominated. Moreno’s side still tried to play from the back and tried to keep possession but found it quite difficult and pretty risky due to PSG’s high block and aggressive frontline pressure. 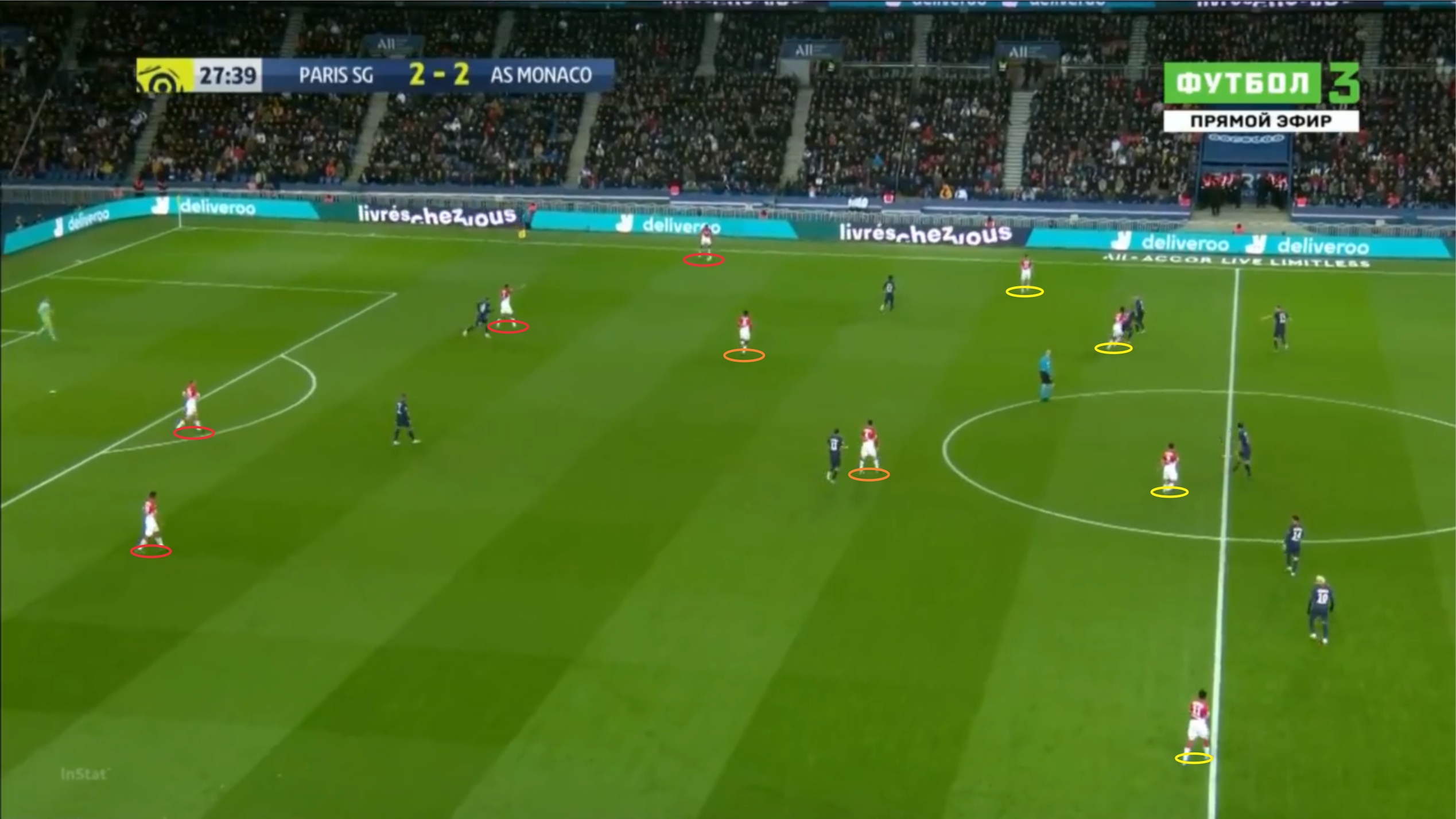 Just like mentioned in the tactical analysis of Monaco vs Reims, when building up from the back, Monaco maintained a pretty rigid structure. However, their shape/structure would be more flexible as the ball progressed into the opposition half.

In the picture above you can see that the two Monaco full-backs didn’t sit high and wide to stretch the defence but would stay rather deep. This could potentially attract a PSG winger to press and open up space behind him.

Once Monaco managed to escape PSG’s frontline pressure, they tended to break forward very quickly, usually just by driving forward with the ball or playing a pass into space to exploit their very high defensive line.

Monaco didn’t always have the opportunity to break forward through open play, especially in the first half. However, they’re extremely quick in transitions. This, coupled with the fact that PSG were playing with a very high defensive line made Monaco extra dangerous on the break. 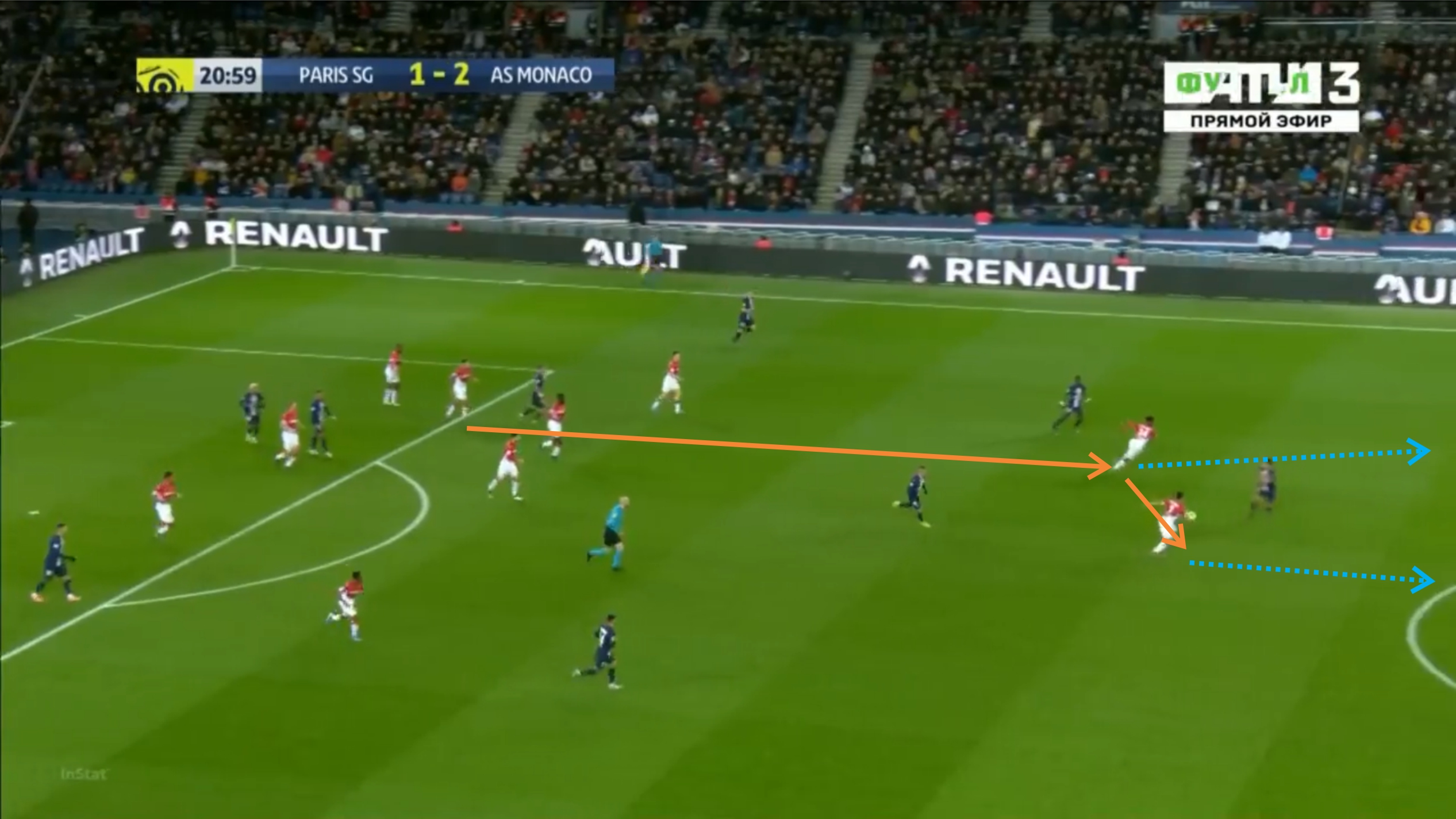 Monaco were very direct and straightforward once they regained possession. They’d just give the ball towards the pacey players or just kick it into space behind PSG’s defence for the players to run onto.

In the picture above, Monaco won back possession inside their own box and the ball was immediately played to Keita Baldé who, in turn, flicked the ball towards Wissam Ben Yedder. 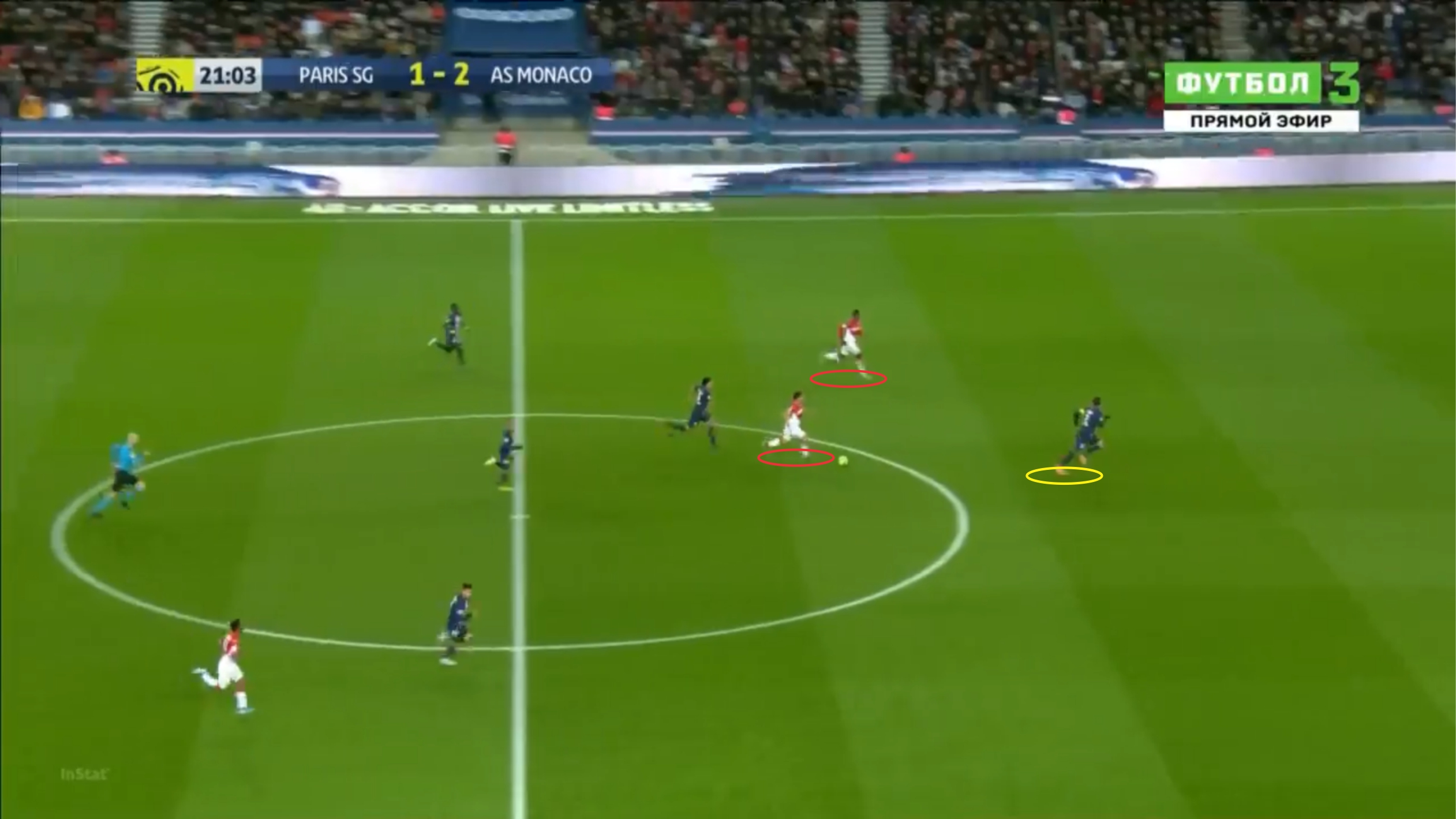 Ben Yedder easily skipped past the challenge of Marquinhos thus creating a 2v1 situation against Silva. Ben Yedder managed to bring the ball into the edge of the box before giving it to Baldé who had his shot blocked brilliantly by Navas who used his feet to make the save.

Monaco relied a lot on quick breaks and exploiting space behind PSG’s defence in this game. Moreno’s side caught PSG napping twice to score two quickfire goals in the first half to put Monaco ahead 1-2. 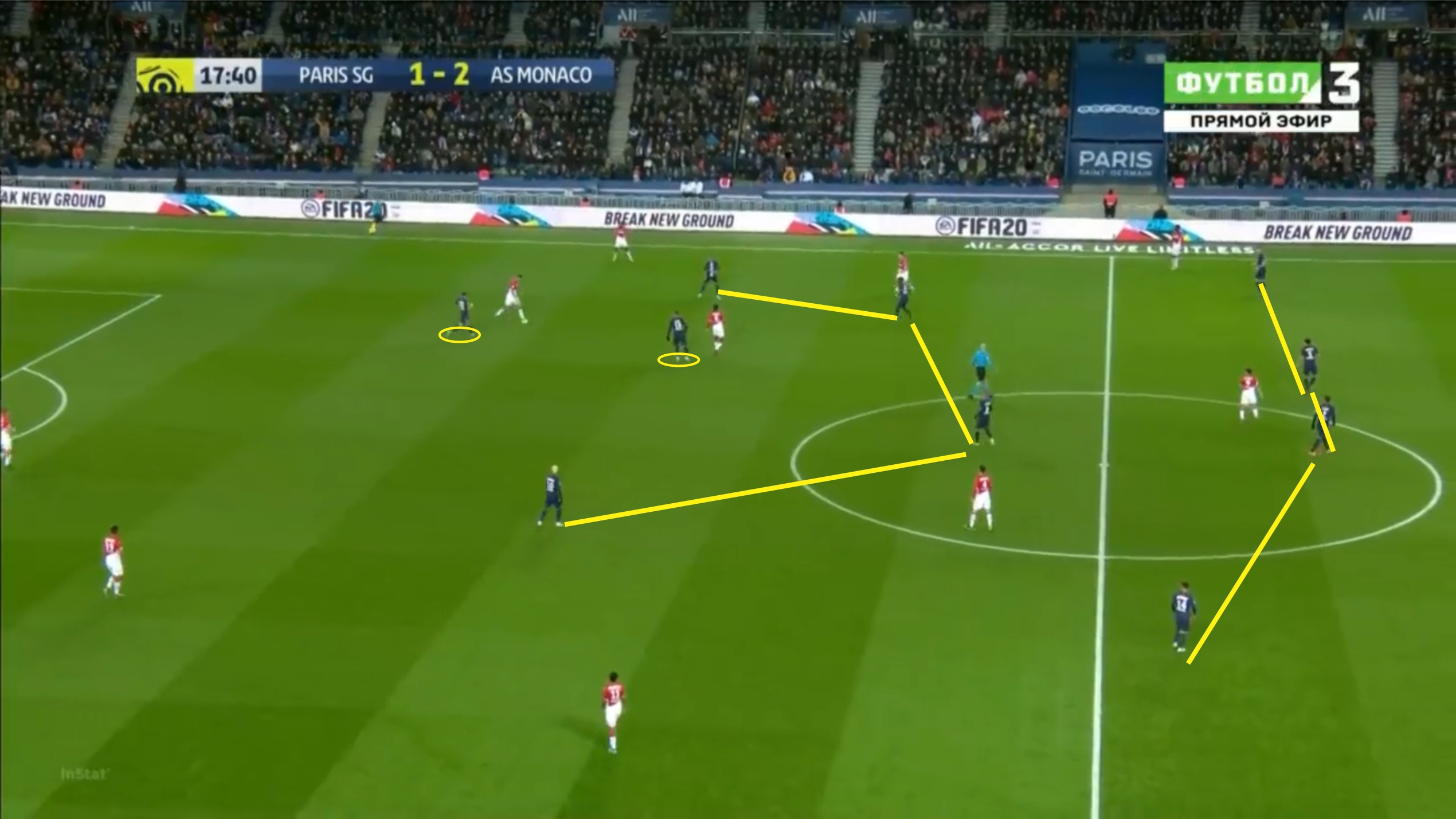 PSG blocked high and press aggressively mainly in a 4-4-2 shape which could turn into more of a 4-2-3-1 as Mbappé would usually mark the access to the nearest ‘6’. 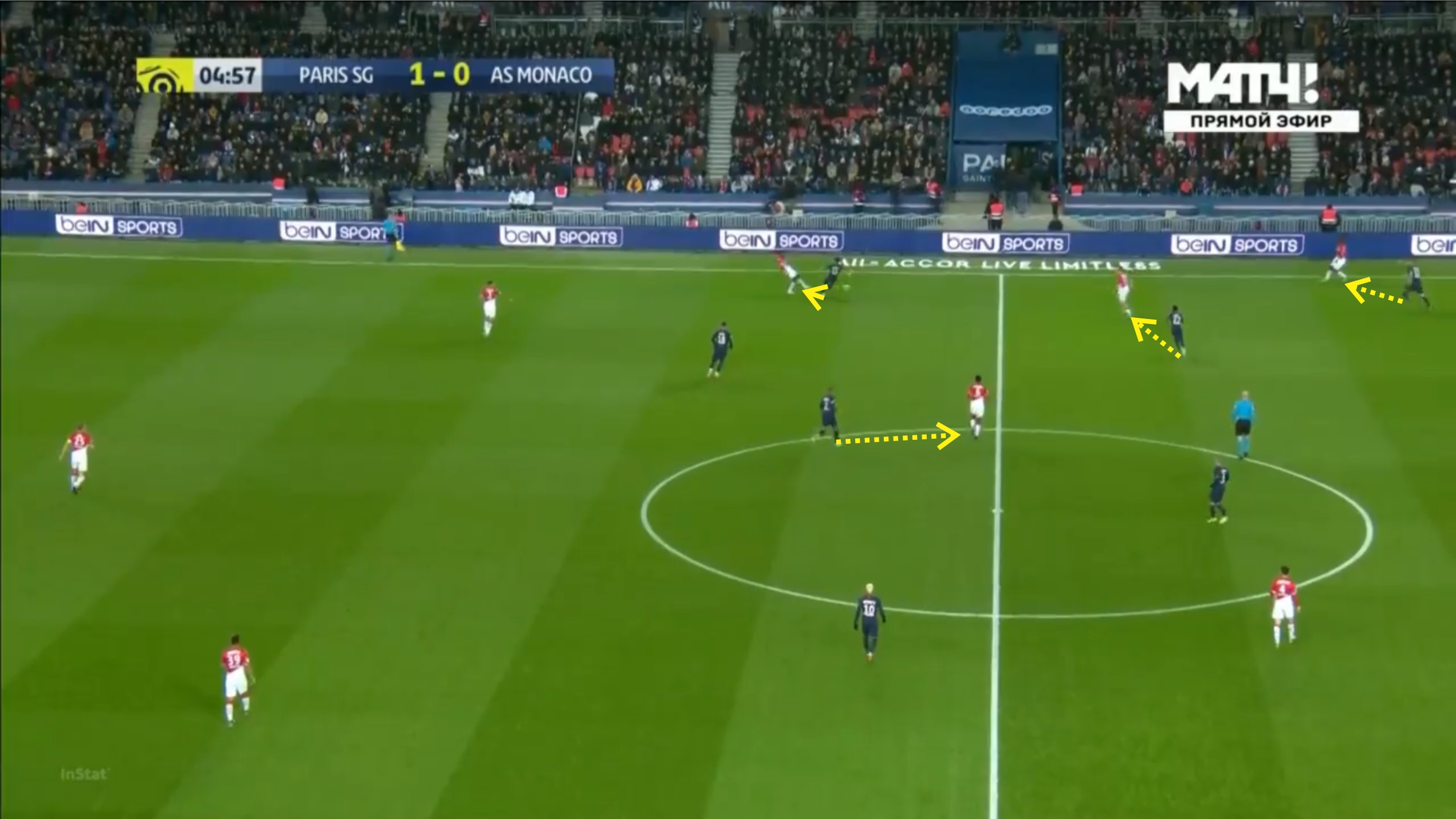 During most of the first half, PSG managed to really unsettle Monaco and pile on the pressure by pressing high and recovering the ball in Monaco’s half. However, in the second half, there seemed to be a slight drop in discipline when defending from upfront. This seemed to be a poor habit of PSG especially after leading in the first half. PSG may have not conceded a lot of goals in all competitions this season but a fair amount of those goals conceded usually come in the second half of the game.

PSG, as usual, dominated possession and piled on the pressure by quickly counter-pressing after losing the ball in advanced areas. Monaco, however, did well to absorb the pressure and quickly hit PSG where it really hurt before they were able to put pressure on them.

Monaco were mostly solid throughout the game as they managed to restrict space and swarm the box to prevent the ball from entering and finding a PSG player there, but PSG proved to be too difficult to handle at times.

The score of 3-3 should be a fair result for both sides but the away team certainly would be the happier of the two teams.