Even though this was an international friendly match, it promised to be an interesting game to watch since both national teams have so many talented players in their squad. In addition, in such games, it’s also always about prestige and the players want to show the coach that they are the best option on their according position.

In this game, it was exactly that case. Germany and Argentina both took this game completely serious in the somehow rematch of the 2014 World Cup final. In this tactical analysis, we will look why Germany was able to be 2:0 in front at the break and which tactics helped Argentina to get a 2:2 after 90 minutes.

The line-up of Joachim Löw surprised many people and for example, the German television broadcaster predicted a different formation ahead of the game. They thought that Emre Can would play alongside Joshua Kimmich in front of a back four, Julian Brandt and Serge Gnabry were expected as wingers and Luca Waldschmidt as the single striker.

However, Löw lined his team up in a 3-4-3 and 3-4-2-1 respectively. Marc-André ter Stegen was the man between the sticks while the back three in front of him consisted of Niklas Süle, Can and the debutant Robin Koch. Kimmich and Kai Havertz were the central midfielders while the two players of RB Leipzig Marcel Halstenberg and Lukas Klostermann were the wing-backs. Waldschmidt and Brandt were the wide players while Gnabry played in the centre upfront.

On the other hand, Lionel Scaloni used a 4-2-3-1 formation with Lautaro Martínez as a single striker and Paulo Dybala behind him as number 10. Roberto Pereyra and Ángel Correa were the wingers while Leandro Paredes and Rodrigo de Paul played in the defensive midfield. The back four was made of Juan Foyth, Nicolás Otamendi, Marcos Rojo and Nicolás Tagliafico. Agustín Marchesín was the goalkeeper.

Lionel Messi wasn’t in the squad as he is currently suspended and other stars as Ángel Di María or Gonzalo Higuaín weren’t part of the team as coach Scaloni wants to give more young players a chance and makes a kind of a little revolution in the Argentinian national team.

That’s no huge difference and it was part of Germany’s plan. They either used a high pressing to win the ball higher up the pitch and have a short way to the opposing goal as soon as they have won the ball or sat back deeper to lure Argentina out and create space for counterattacks.

When they pressed in at Scaloni’s team, the whole German squad pushed forward to stay vertical compact. In these cases, also the players of the back three followed their opponents into the opposing half as this can be seen in the image below. Süle follows his opponent to avoid that a gap between the midfield and the back three can occur.

However, since they had with Gnabry and Brandt two fast players for counterattacks on the pitch, they also often defended deeper in a 5-4-1. Since Argentina is a team, which likes to dominate the game and circulate the ball, they took their time during the build-up and slowly moved the ball further up the pitch when Löw’s team defended deeper.

Considering this, all players of Scaloni’s team moved in this situation further up the pitch what created space for Germany which they used during their transition moments. They used this pattern also ahead of the 2:0 of Kai Havertz. In the example below, we can see Germany’s defensive system. 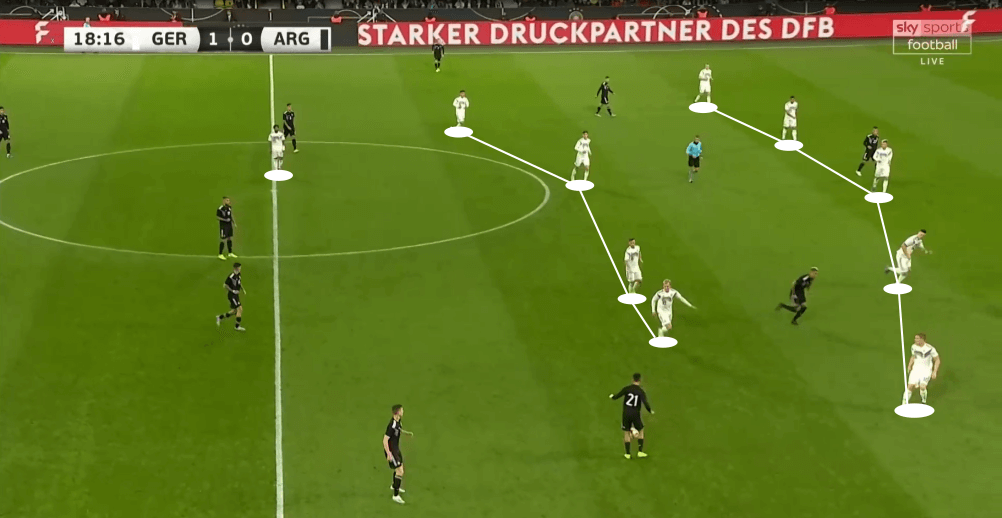 It was quite surprising that Waldschmidt didn’t play in the centre upfront. However, since Gnabry would mostly stay wide as a winger, he would have occupied the same space as Klostermann on the right side. In light of this, it made sense to let Brandt and Waldschmidt play in the wider positions since both like to move in the half spaces and receive the ball in these areas to create something dangerous. We’ll look at Gnabry’s role later in this analysis too.

The intelligent movements of Waldschmidt and Brandt during their possession phases combined with Gnabry’s speed when it came to counterattacks seemed to be the perfect mixture for Germany in the first half. Besides, the wing-backs also supported those three men upfront and Klostermann, for example, provided one assist and won back the ball for his team ahead of the 2:0. In the image below, we can see Freiburg’s striker Wladschmidt in the left half space which he mostly occupied.

Argentina’s asymmetric approach without any success

As already mentioned above in this analysis, Argentina had during the first 45 minutes more passes per period of possession. Also, they played 45 more successful passes in the first half. However, they had just one shot on goal which was from distance. Compared to Germany’s three shots on Marchesín’s goal, it shows that Argentina weren’t able to convert their seeming dominance into goalscoring chances.

However, they used during their build-up an asymmetric formation. Foyth stayed deeper to create a kind of a back three with Rojo and Otamendi while Tagliafico pushed higher up the pitch. Considering this, Correa mostly shifted inside to position in the left half space. Paredes and de Paul stayed in front of the back three. Pereyra stayed wide on the right side and Martínez stayed in the centre upfront. Dybala had a lot of freedom but mostly positioned himself in the right half space. Their positioning can be seen in the image below.

However, they could rarely break through and on the other side, they also didn’t defend that well. Especially Atletico Madrid’s Correa showed a very bad performance in the first 45 minutes and also didn’t look that good ahead of the 1:0 as we can see in the image below. Klostermann received the ball on the wing and easily went past the Argentinian winger. Correa never really tried to get into a duel and the German wing-back had enough time and space to play the ball into the centre.

However, Argentina was as already mentioned in this analysis just one time in the first half able to get really dangerous as de Paul shot from distance, but the ball just hit the post. This was one of the few situations in the first half in which they were able to find a player who has a lot of space in a central position. In this case, it was possible since Argentina was able to overcome the pressing on the right side and then Dybala played a great pass to Martínez in the centre who laid the ball off for the midfield player from Udinese. In light of this, Scaloni’s team were not often enough able to play past Germany’s pressing and when Löw’s team sat deeper Argentina never found any space between the lines to progress the ball.

The winger of Bayern Munich was once more one of the best players on the pitch as he scored the 1:0 by himself and assisted Havertz to score the 2:0. Especially in the situation ahead of his goal, he used his three great strengths: acceleration, the technique to control the ball and finishing. He came first to Klostermann’s cross as he’s so fast, then he chipped the ball a bit to have it in the right position to finish it with the second touch and put the ball past Marchesín.

However, he didn’t only score his 10th goal in his 11th appearance for the German national team but was in general very important for his team. As you would expect, he didn’t just stay high during their periods of possession. Instead, he tried to move between the lines and drag the opposing centre-backs out of their position. Besides, he moved a lot to always provide a passing option and his teammates often found him with passes between the lines as you can see in the example below.

Also, he was important for Germany’s moments of transition. With the aid of his speed, he’s surely one of the best German players when it comes to counterattacks. In addition, he has, as already described, the necessary technique to control the ball as fast as possible which helps him and his team a lot during counterattacks.

In the example below, he receives a high pass since Löw’s team want to get out of the counter-pressing situation of Argentina. Gnabry can get the ball under control with the first touch in the air to then immediately pass the ball to his teammate to keep up the speed of this counterattack.

In the half time, many people maybe thought that this game would be over. However, Scaloni’s team came back and rewarded themselves for their great second half and scored twice. So, the result of the game after 90 minutes was 2:2.

The main reasons for that were, that both coaches adjusted their teams’ tactics and systems. Scaloni took off the disappointing Correa and brought for him Marcos Acuña on. Besides, Lucas Ocampos replaced Rojo and they switched to 3-4-3. This had two main reasons: firstly, due to that change, they had two offensive thinking players on the left wing what forced Klostermann to play more defensive and so, he wasn’t able anymore to support his teammates in the offence that much. Secondly, Martínez often looked a bit alone upfront as Correa was nowhere to be seen. With Ocampos on the left side, he had a player beside him, who was more present.

So, Argentina got better in the second half, but Germany was still able to sometimes get up the pitch and create dangerous situations. The turning points were then the substitution of Brandt and Gnabry as then Germany subbed off their fast players for the counterattacks. The two young players went off the pitch in the 66th and 71st minute respectively, and Nadiem Amiri and Suat Serdar replaced them. Both men are great players and strong on the ball, but no real players for counterattacks which Germany would have needed as Argentina dominated the game. In addition, Lucas Alario came on for Argentina and so they had another man who supported Martínez in the centre. And exactly this paid off ahead of the 2:1 as Koch had to mark both Argentinians ahead of a cross and in light of this, Alario was free to score with a header in the 66th minute as shown below. 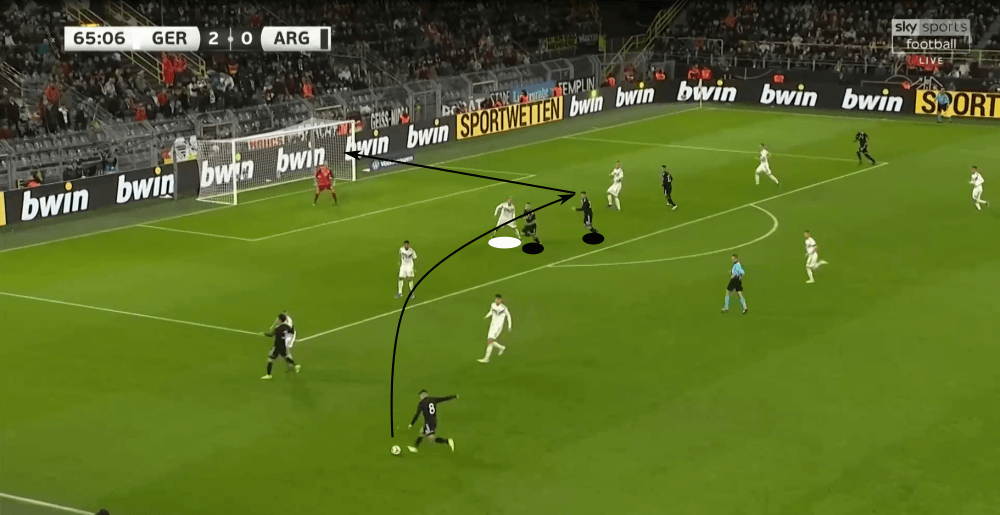 In the second half, Germany was almost never able to get out of their own half and Argentina dominated the game. Löw’s substitutions left his team with no real fast player for counterattacks on the pitch and so Scaloni’s team increased the pressure from minute to minute and created several chances. And then it was the other substitute Ocampos who was able to score the 2:2 in the 85th minute. Considering this, the two coaches had a huge impact on the second half and Scaloni made the right decisions to get a draw.

In the first 45 minutes, Germany was the clear better team. Even though Argentina dominated, Löw’s team used several defensive tactics to avoid goalscoring opportunities for Argentina and create space for themselves for counterattacks.

In the second half, the changes which were made by the two coaches influenced the game extremely with the better ending for Argentina who will face Ecuador in their next international friendly. On the other hand, Germany will take on Estonia in their next game for the qualification for the EURO 2020.