Germany faced Austria in the UEFA Women’s Euro 2022’s quarter-finals and the Germans were able to book a ticket for the semi-finals after beating their opponent 2-0. In fact, the result might let us think that the mission was easy for Germany, however, the reality is that Austria threatened Germany on several occasions and were very close to equalising during both the first and the second-half.

This does not take away the credit from Germany who resisted until the end and were able to add a second goal in the final minutes to secure their qualification, knowing that they scored their first goal at the 24th minute of the match. Both Germany and Austria surprised most followers of the tournament with their consistent and convincing performances during the group stage and continued to do so in this quarter-final match since both teams have never showed any sings of surrender and kept their chances alive until the 89th minute.

Prior to this match, Austria conceded just one goal in their three group stage games and were able to disturb all of England, Norway and Northern Ireland. The team looked solid and compact in defence and knew how to circulate the ball and keep possession while advancing to reach the final third. And as the players got used to the atmosphere and to the tournament, we started noticing some great attacking actions from Austria and they were able to materialise those actions against Germany as well since they shot ten times in this game and hit the woodwork thrice. At the same time, Germany proved most followers wrong when they succeeded in qualifying at the top of the “group of death”, knowing that they beat all of Spain, Denmark and Finland without conceding a single goal and while scoring nine goals in three games.

In this tactical analysis article, we will be looking at how Germany succeeded in winning this game by focusing mainly on their attacking performance while also exploring Austria’s tactics, the positive aspects of their performance and what they lacked to equalise or beat Germany.

Germany were lined-up according to the 4-2-3-1 formation with Merle Frohms as a goalkeeper, Giulia Gwinn, Kathrin Hendrich, Bayern Munich’s Marina Hegering and Felicitas Rauch in defence, Lena Oberdorf and PSG’s Sara Däbritz as central midfielders, Lina Magull as an advanced playmaker, Svenja Huth and Klara Bühl on the wings and Alexandra Popp as a striker.

On the other side, Austria relied on the 4-1-4-1 formation with Arsenal’s goalkeeper, Manuela Zinsberger, one of FAWSL’s promising right-backs, Laura Wienroither, Carina Wenninger, Marina Georgieva and Verena Hanshaw in defence, Sarah Puntigam as a defensive midfielder, Sarah Zadrazil and Laura Feiersinger as central midfielders, Julia Hickelsberger and Barbara Dunst on the wings with Nicole Billa as the team’s sole striker. 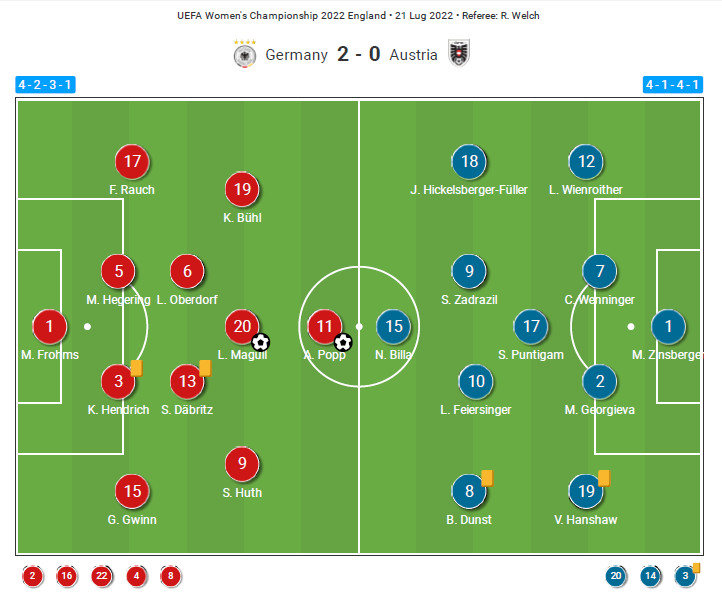 Germany were the team that had more possession in this match with 60,25% against 39,75% for Austria. The Germans were able to exploit that possession very well in attack by shooting 20 times, although they didn’t threaten Austria’s goal a lot because only five shots out of 20 were on target. The team relied mainly on their quick and physically strong wingers to advance through the wings and serve Popp or one of the midfielders and mainly Magull or Däbritz, who often advanced to create numerical superiority inside the box and attempt at finishing actions.

One of the first German’s attacking attempts saw Rauch advancing on the left-wing and playing the role of Bühl while Magull made sure to insert herself in the free spot inside the box, acting like a second striker with Popp who was also waiting for a through pass. 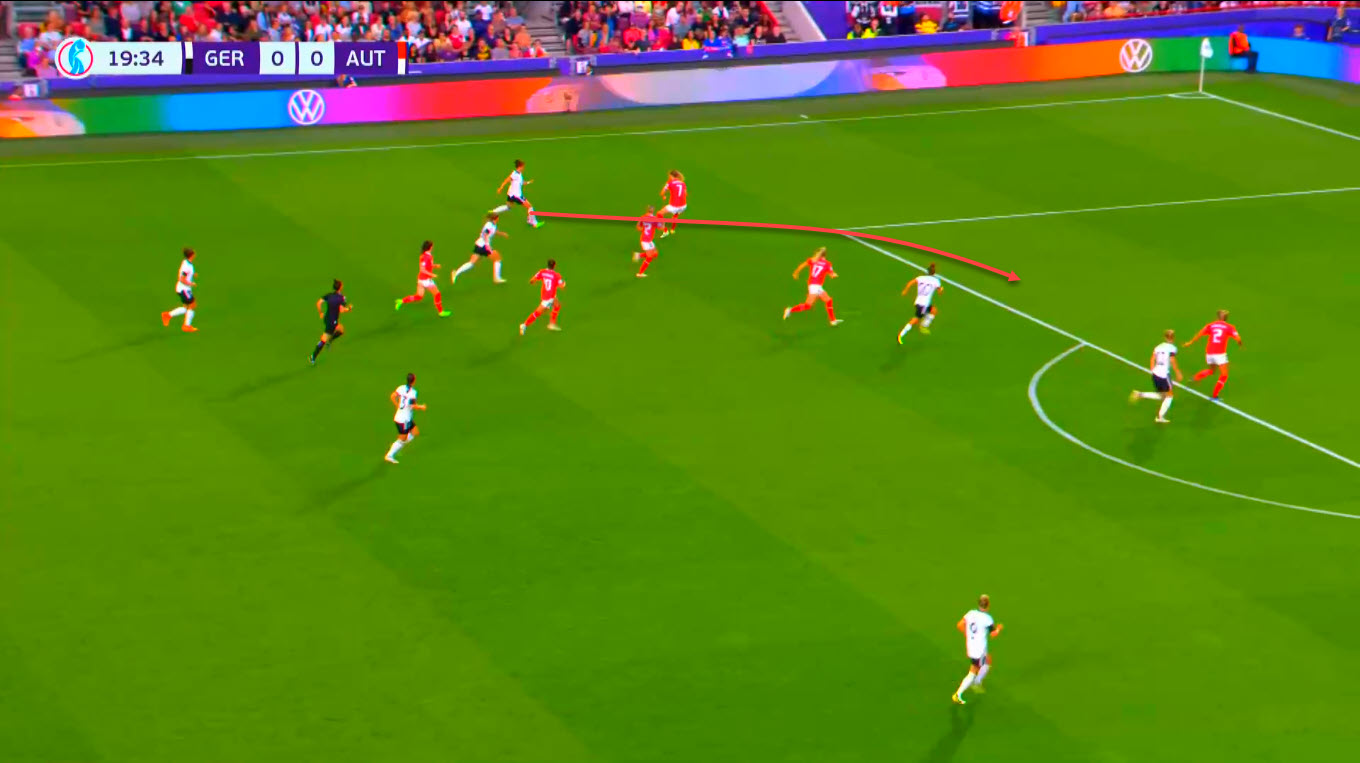 Germany were successful in scoring their first goal after just a few minutes after a clear mistake from Zinsberger that was intercepted by Rauch in the direction of Bühl who exploited the chance extremely well by winning her duel with her direct marker and entering the penalty box while looking for adequate passing possibilities. She identified Popp who was still trying to get rid of the defenders in her way but at the same time she saw Magull coming from behind and not being noticed at all. Bühl therefore provided an assist to Magull who put the ball inside the net with a simple shot that gave no time for Austria’s goalkeeper and defenders to react or save the goalscoring attempt. 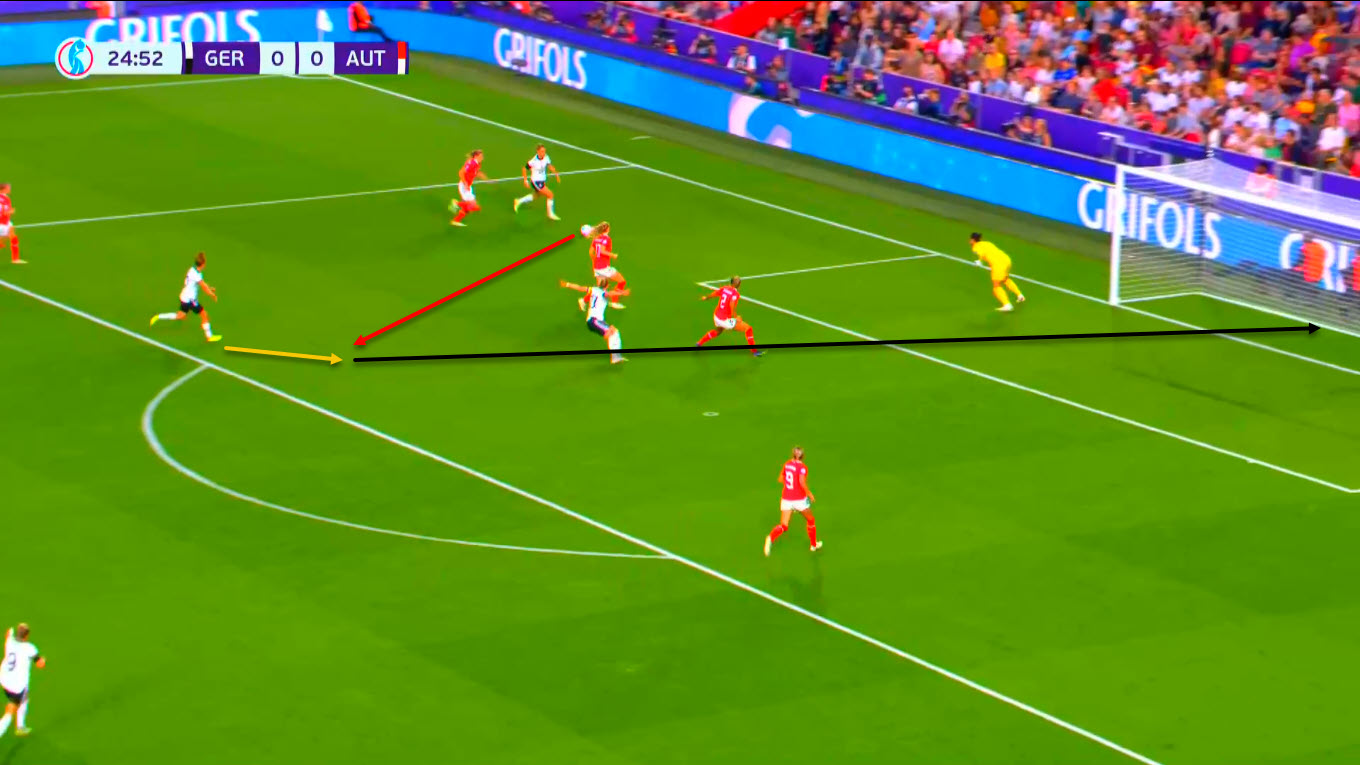 After scoring their first goal, Germany conceded far too many chances to Austria who were very close to equalising. Also, the Germans should become more decisive in finishing games early in such situations in order to not risk falling in bad scenarios, although it is not as easy as it sounds. Germany have done their best in order to score a second goal and their attempts didn’t stop in the second-half, but at times they weren’t lucky enough and at other times they didn’t finish the actions as accurately as needed.

Suitable scoring opportunities came for Germany especially during the second-half but they weren’t as accurate in finishing as they were in their first goal. Bühl was at the centre of almost all of her team’s actions and represented a key threat to Austria’s defence as she usually won her duels against her direct opponents with ease and always found a way to provide a key pass to a player coming from behind. This time, it was Gwinn who received Bühl’s pass and aimed at scoring it in the bottom left corner but she wasn’t lucky enough because her shot hit the post and went out. 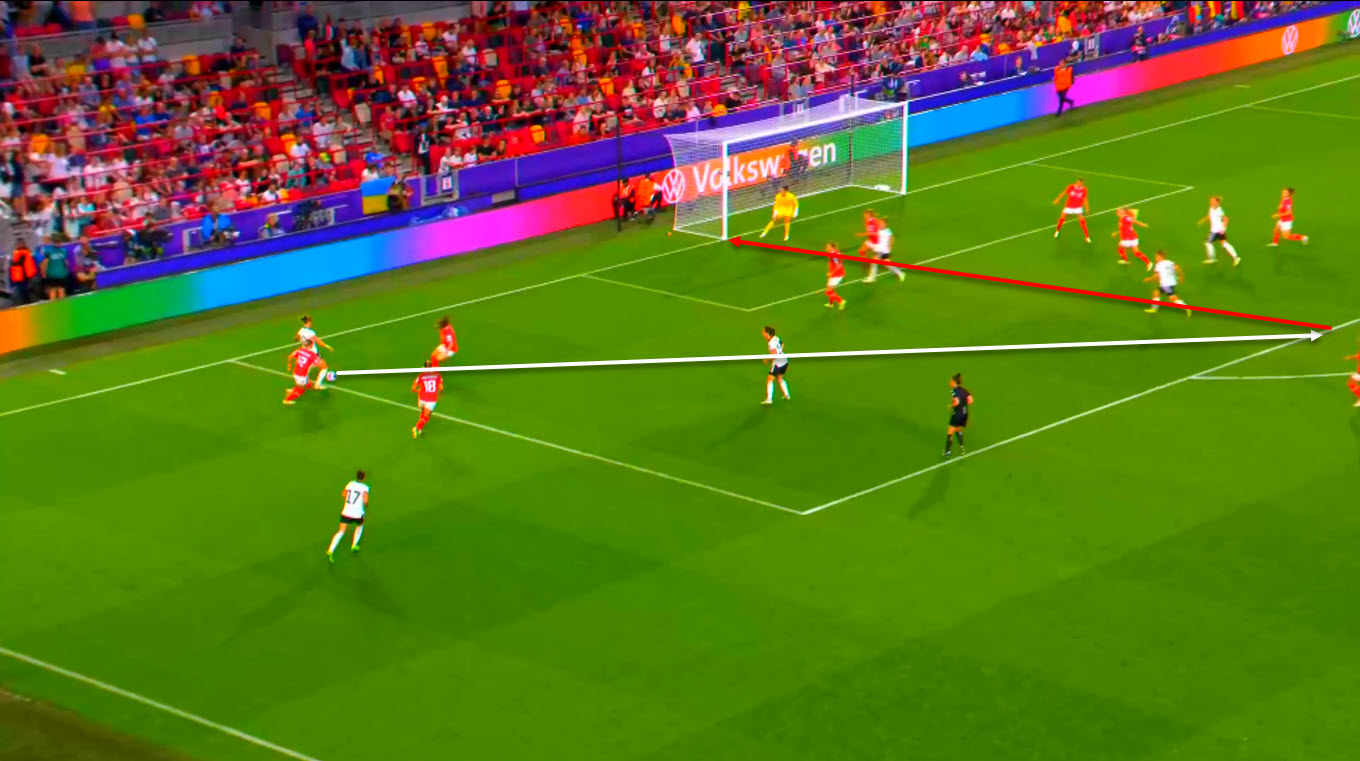 Bühl herself hit the crossbar with an amazing shot from distance after dribbling past her opponents while cutting inside. She proved in this match that she is a very talented winger who is extremely dangerous on 1 vs 1 and who also has a great vision, passing skills and shoots with power and accuracy as well. 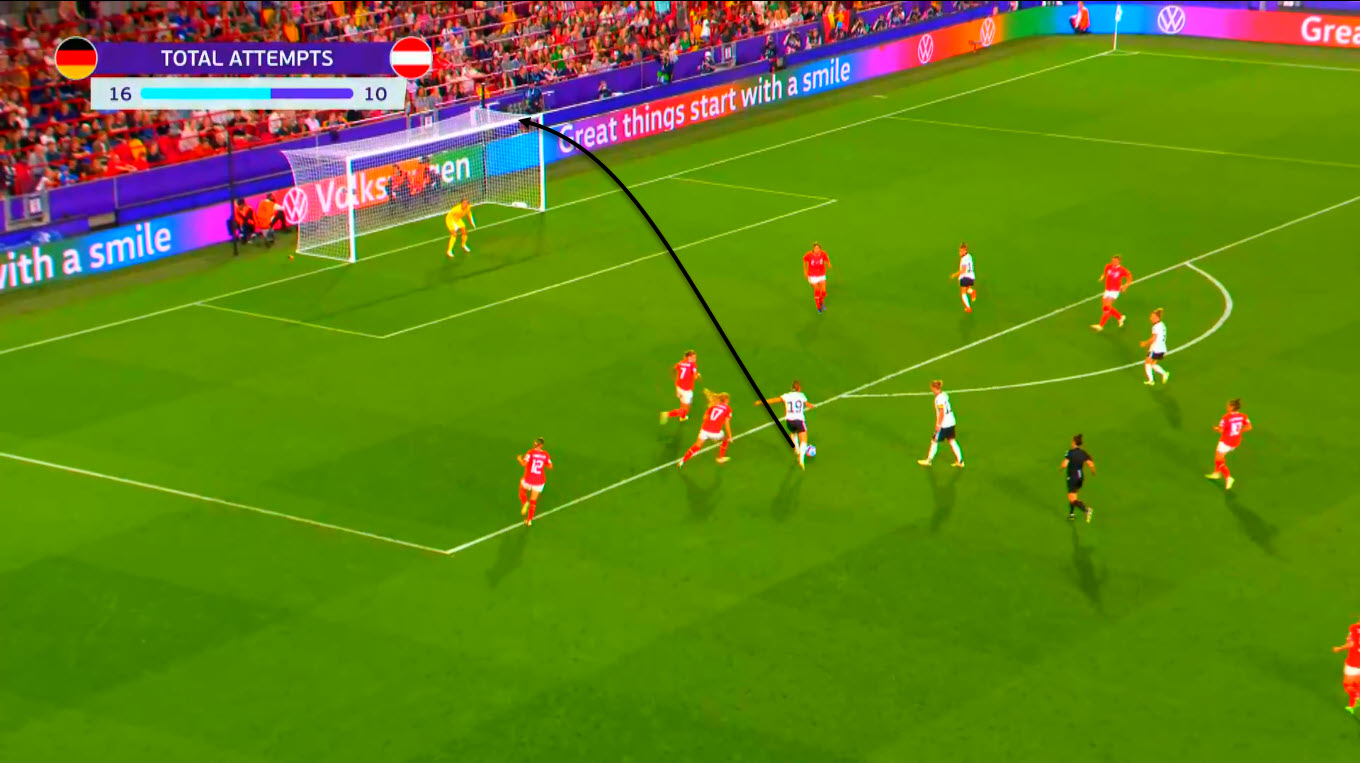 Nevertheless, she had a golden possibility to materialise all these skills and coronate her efforts by scoring a goal after receiving a through pass from Popp to be just in front of goal with no real instant disturbance, but she missed the target in a strange way. Germany will have to exploit such opportunities in a much more concrete way in the future by working on finishing even more in training to not regret missing chances when facing tougher opponents. 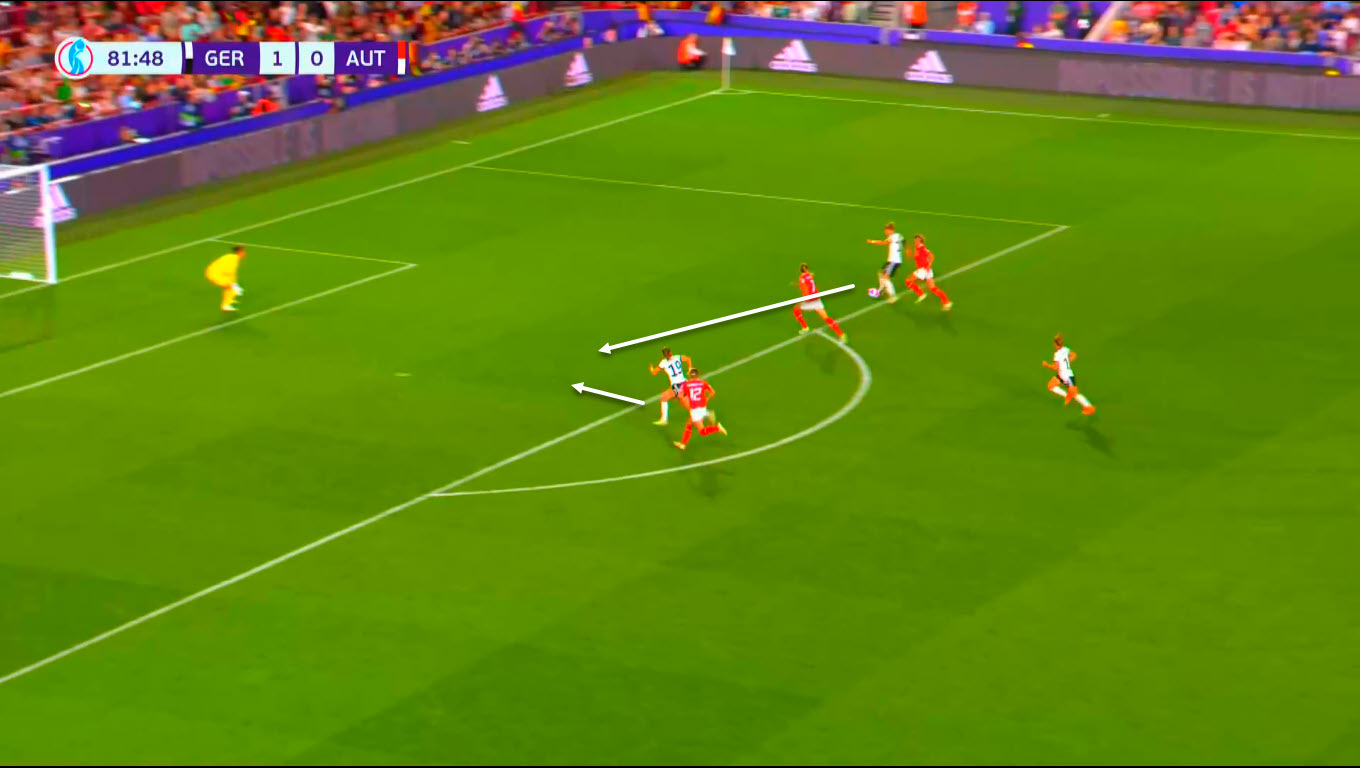 At the end of the day, Popp’s experience and finishing abilities were enough to secure the match at the last minutes for Germany as she exploited another mistake by Zinsberger and anticipated her movements with a sliding tackle to deflect the ball and turn a clearance into a German goal that ended Austria’s hopes for a late comeback.

Austrian players shouldn’t be ashamed of their performance, on the contrary, they have to be proud of their Euro 2022 journey as well as of their performance during this match. They were able to disturb Germany throughout the match and created a lot of danger to their defence. In fact, Austria were very close to scoring especially when they were behind in score and the players showed no complex in trying to defend their chances.

Moreover, Austria were the first to attack and to threaten their opponent as Georgieva hit the post with a powerful header following a corner-kick at the 12th minute and was not lucky enough to see her shot go inside the net. But this was just a proof of how Austria were determined to play all their chances despite the German’s advantage on paper. 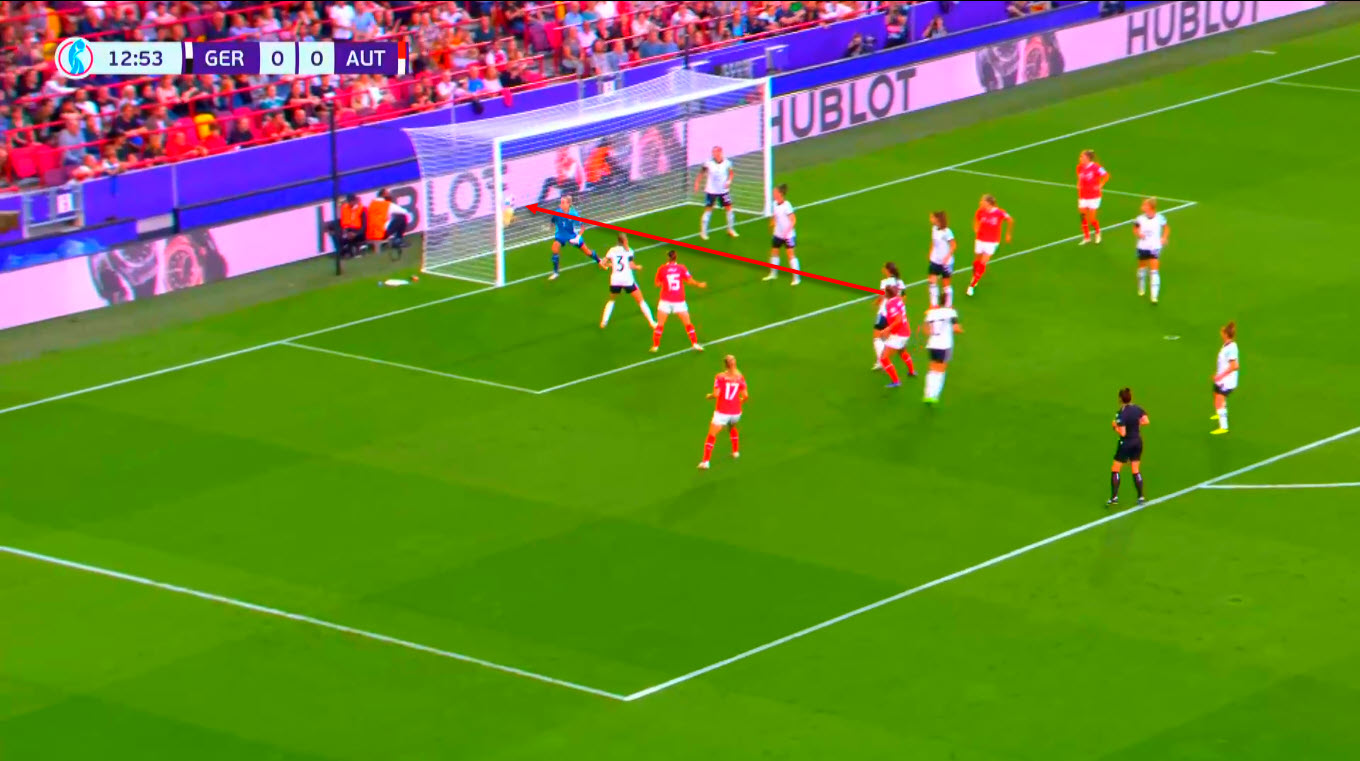 Nevertheless, they exploited every opportunity and every German mistake in order to create some threat and aim at scoring. For instance, Dunst didn’t hesitate or think twice after Frohms made a bad clearance and Dunst immediately thought about shooting from distance as soon as she controlled the ball. Her chip attempt was successful despite the long distance as it hit the crossbar and went out miraculously, for the chance of Frohms who risked conceding a goal that would have complicated things for Germany. 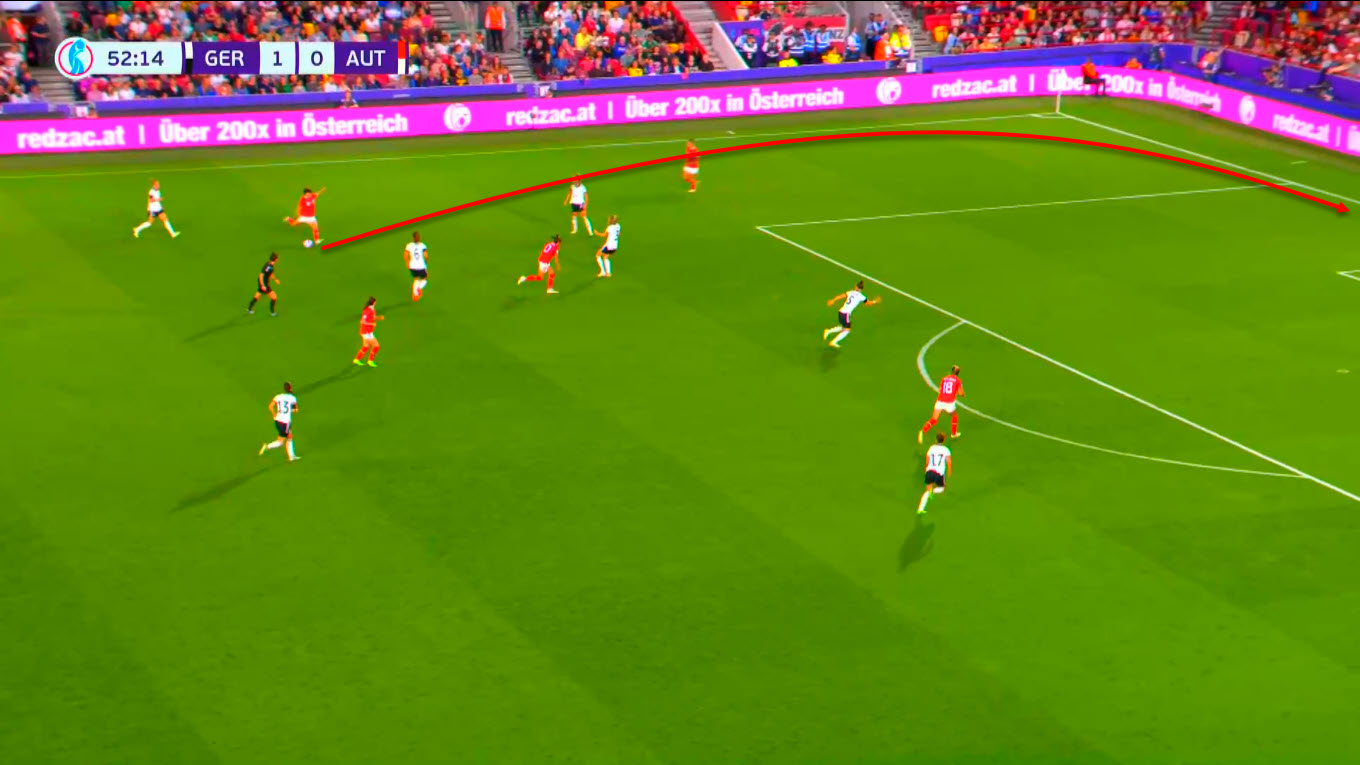 A few minutes later, Puntigam, one of the team’s key players, was able to shoot from distance with great power after the ball was deflected off a German player but her shoot hit the post and went out once again although it was well shoot and well angled. And that’s exactly why Austria should be proud of their performance even though these clear goalscoring chances can only make the team suffer more.

Such performances will serve as a lesson for the team though as it will help them identify their big defensive mistakes that costed them two crucial goals, while at the same time it would help them be more clinical in attack and make sure to avoid hitting posts and shoot more accurately in the future, knowing that this team has a great potential that needs to be even improved ahead of the upcoming tournaments. 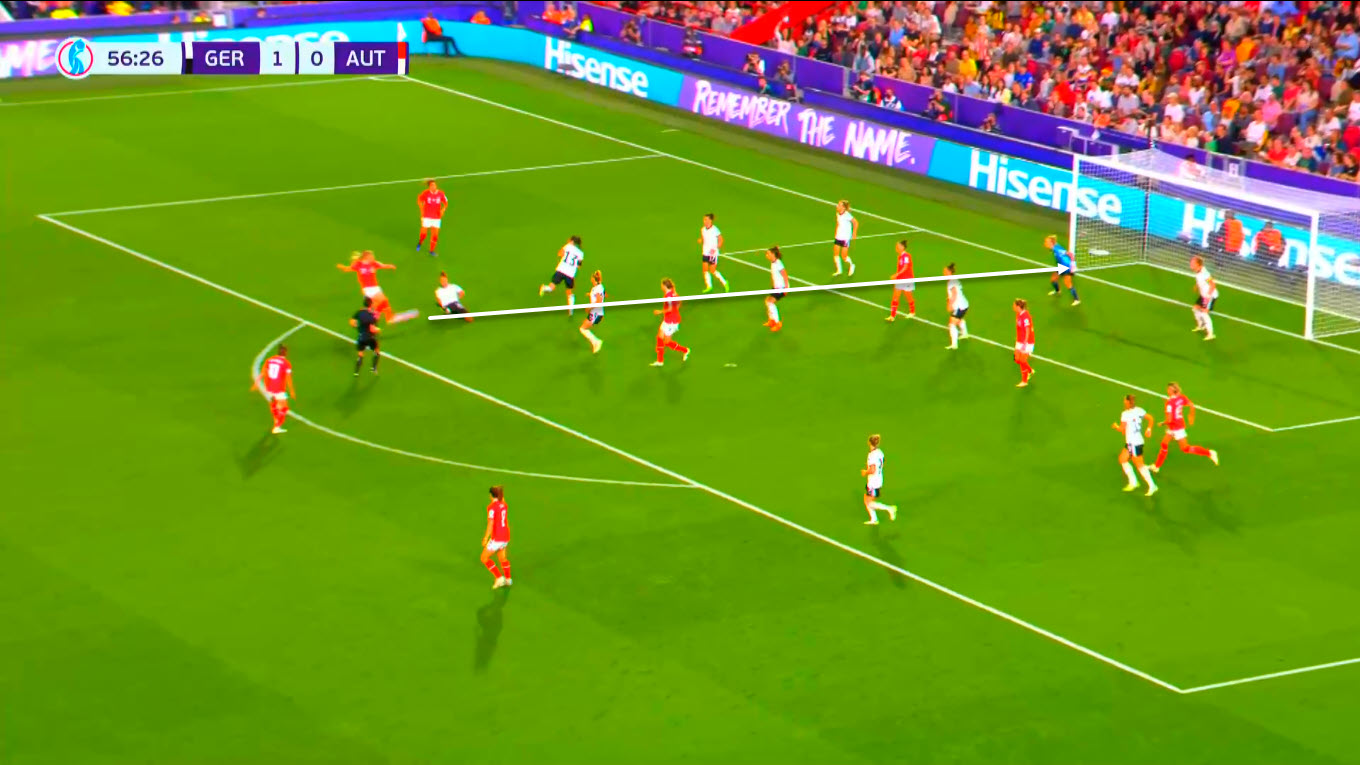 Germany got the victory that they wanted and deserved following a convincing attacking performance and a dominance that confirmed once again that the Germans can reach the final and lift the trophy once again. At the same time, as our analysis showed, Germany looked fragile on certain occasions and conceded some dangerous opportunities and they need to work on that defensive aspect as soon as possible to avoid such things in the semi-final.

Austria will quit the tournament knowing that they did their best and that they were the surprise of the tournament so far since they put on some excellent performances against though teams. They will have to work harder to the upcoming tournaments to confirm that they have the potential to reach advanced stages on big occasions.