With only one match remaining to play for each team, England are actually at the top of the group with 27 points, having won all of their games so far, while Austria hold the second spot with 19 points. They have won six games, drew once and lost twice. Nevertheless, they have guaranteed qualification to the playoffs where they will have to battle for a World Cup ticket with the eight other playoff teams. However, England have already secured their qualification to the 2023 Australia and New Zealand World Cup thanks to their convincing performances throughout the qualification phase journey.

In this tactical analysis article, we will explore the Lionesses’ tactics in order to see how England succeeded in scoring two goals in a difficult away game and how they managed to keep a clean sheet while also looking at Austria’s errors and what lacked their performance in order to disturb England and get a better final result from this match.

The analysis will begin by introducing both teams’ line-ups and we are going to begin with the hosts. Irene Fuhrmann, Austria’s head coach, started the game according to the 4-1-4-1 formation with Arsenal’s goalkeeper Manuela Zinsberger, Laura Wienroither, Carina Wenninger, Marina Georgieva and Verena Hanshaw in defence, Sarah Puntigam as a defensive midfielder, Sarah Zadrazil and Laura Feiersinger as central midfielders, Julia Hickelsberger and Barbara Dunst on the wings with Nicole Billa as the team’s sole striker.

On the other side, Sarina Wiegman, England’s head coach, opted for the 4-2-3-1 formation with Mary Earps as a goalkeeper, Lucy Bronze, Millie Bright, Leah Williamson, and Manchester City’s Alex Greenwood in defence. A double pivot composed of Georgia Stanway and Keira Walsh, Bethany Mead and Lauren Hemp as wingers, Manchester United’s Ella Toone as an advanced playmaker and Alessia Russo as a striker. 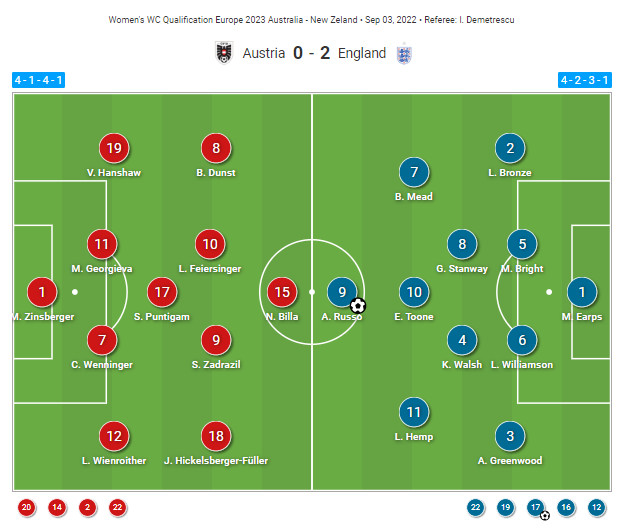 England showed once again that they have a high quality attack and some of the best attacking players in Europe by beating Austria in an away game while creating a lot of goalscoring chances. In fact, England shot 11 times in this game and six of these shots were on target, including two goals. This means that the team creates well and usually finishes the action well too. Nevertheless, Wiegman should always work on improving these statistics and especially on reducing the number of shots off target per match, which requires more concentration in front of the goal and more finishing training.

England started the match with the right mentality as they pressed high on Austria’s defence, had more possession with 63.66% to 36.34% and were more dangerous inside the final third. They exploited their wingers’ quick and efficient dribbling skills in order to reach Russo either via crosses or by penetrating towards the box or cutting inside. Moreover, Toone played a significant role in creating space for the three other attackers whenever she advanced with the ball inside the final third as she attracted Austrian defenders to her.

As opposed to the second half, the Lionesses started the game with Mead on the left wing and Hemp on the right one, creating confusion in Austria’s marking missions. Alongside both of these wingers, Bronze and Greenwood’s contributions were very impactful as they advanced so often and helped in creating a numerical superiority whenever England were in Austria’s half. Not only that, both Bronze and Greenwood brought a lot of quality to England’s final passes as they both are very good crossers.

In reality, England’s first goal came from a Mead advancement and a Greenwood accurate cross towards the box which met Hemp’s head. Hemp then directed her header towards Russo, and when you have an instinctive and determined finisher like Russo, you can guarantee that she scores goals from such situations despite the difficulty of the action. She had to completely go for a volley using her left foot to reach the ball and put the right impact on it in order to go inside the net. 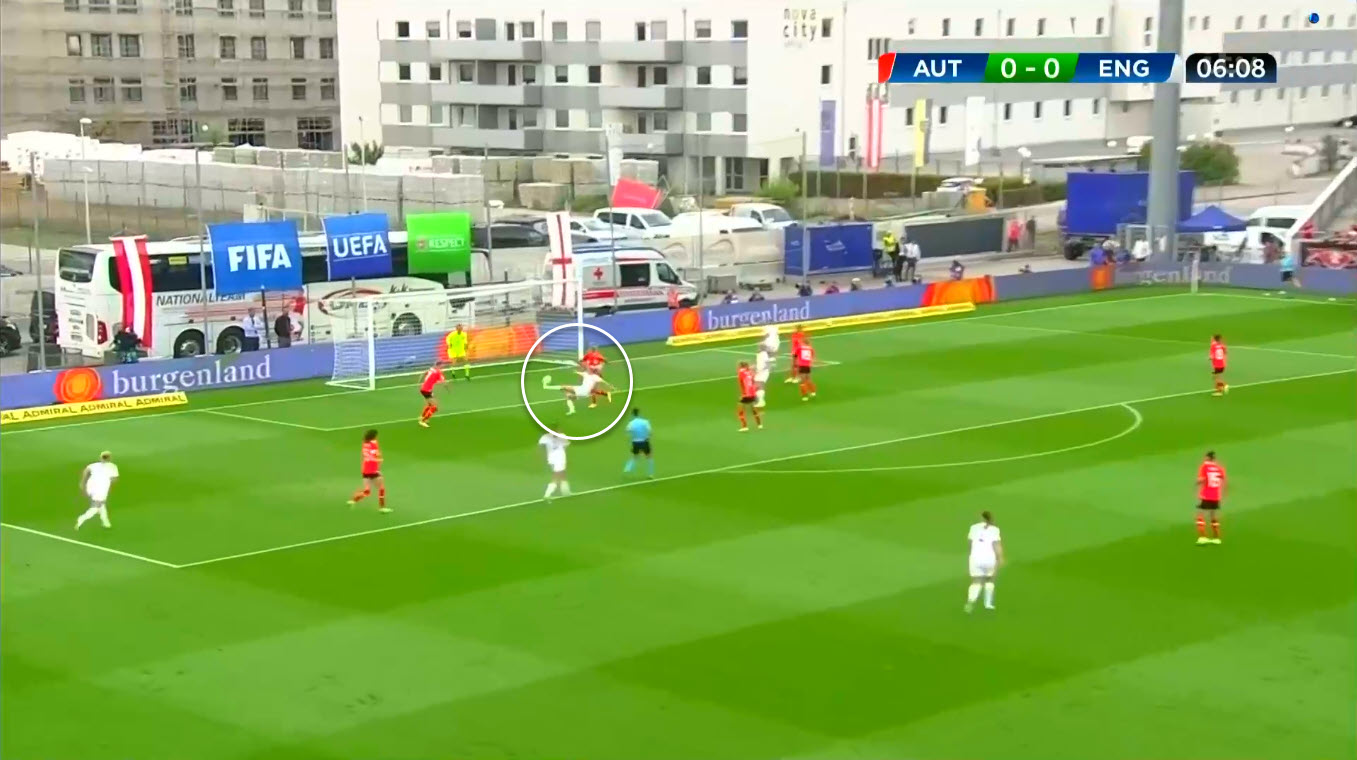 Following this first goal, England did not retreat and continued their attacks mainly relying on shots from distance from Walsh, Toone, Hemp, Mead and especially Stanway who was successful in scoring a beautiful and powerful shot from distance during WEURO 2022. She tried to repeat a similar goal during this match but wasn’t successful on a few occasions and she preferred to pass to Mead in other situations like she usually does. But this just explains how much variety this English team can have in their attacking plans.

They use crosses very well from both wings towards Russo, most attack and midfield players have great shooting skills, and if all of these options fail, they can rely on dribbling from the middle through Toone or exploit Hemp and Mead’s cutting inside. At the same time, Wiegman’s role, in this case, is to ensure when to monitor the players’ decision-making and show them when to go for one of these solutions and when to go for other solutions. For instance, Stanway repeated her shots from distance on several occasions and at times she had better solutions to go for.

In the following example, you can see how far the distance of her shot was when at the same time she could have given a through pass to Russo who was moving to meet a possible pass. Also, she could have given a pass to either Hemp or Mead who were better positioned and could have brought more danger by penetrating the box or by crossing. Monitoring such actions and decision-making inside the final third would improve England’s goalscoring rates even further and make the team more efficient from an attacking perspective, knowing that they are already excellent in this aspect. 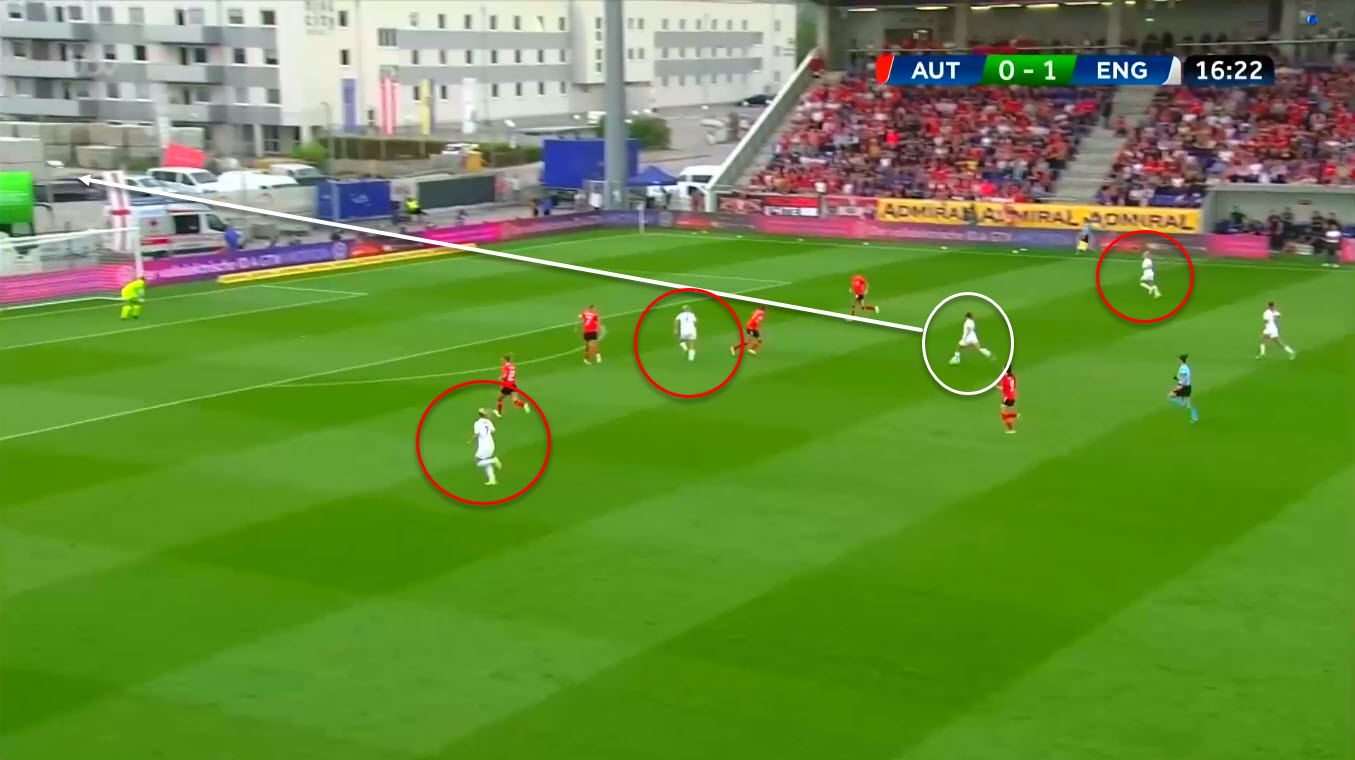 Austria’s performance in this match was marked by a lot of confusion and uncertainty in defence due to England’s organised attacking attempts and their continuous threats. In this regard, Austria were not able to resist the big number of opportunities created by England and conceded two goals despite succeeding in limiting Russo and the wingers’ danger on a number of other occasions.

And apart from Russo’s finishing skills that allowed her to avoid Austrian marking for a few seconds and score the team’s first goal, the second England was scored thanks to collective work from the team and due to some individual mistakes from Austria.

It all began when Zadrazil lost the ball after controlling it and after resisting Stanway’s immediate pressing. Then, Toone and Beth England exchanged passes quickly and gave it to Stanway when Austria’s defence was not really organised and their defensive block was still high since the team was in a possession phase. Stanway and Nikkita Parris noticed this and exploited it in their favour as they first saw Parris’ penetration behind the defensive line and immediately provided a through pass towards her running direction. Parris then showed no hesitation when finishing the attack with success, ending Austria’s hopes for a comeback. 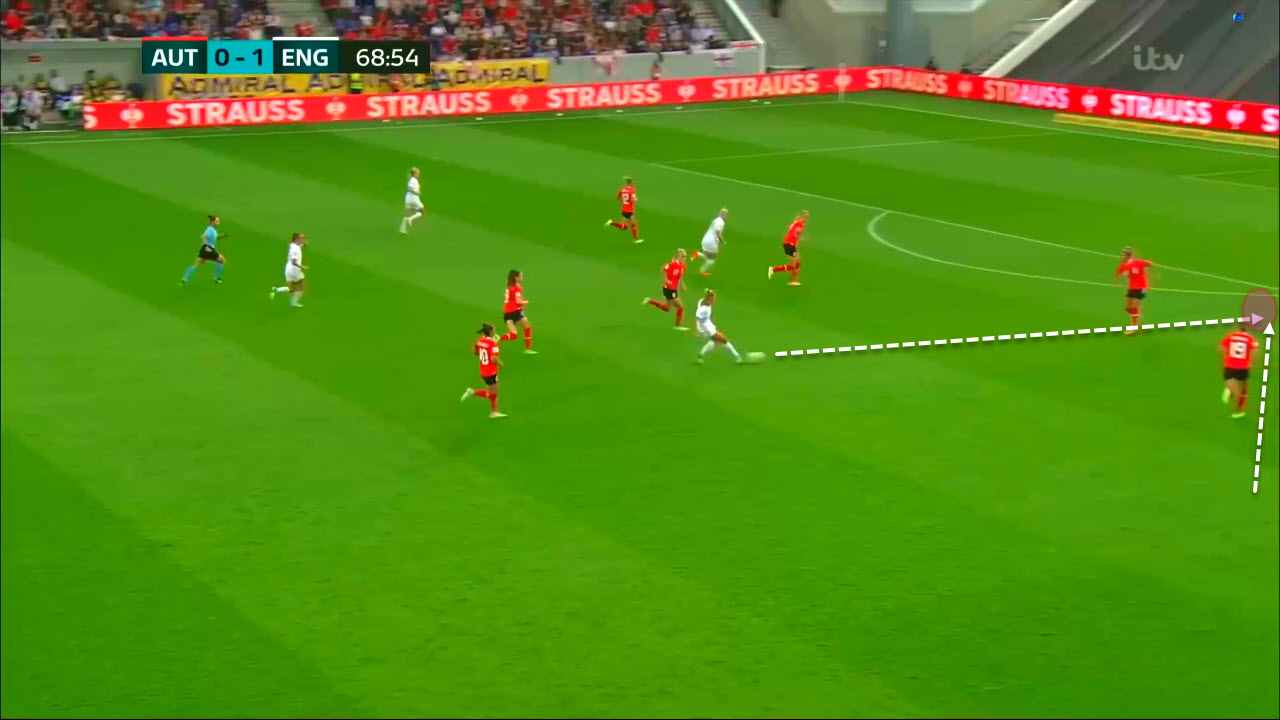 Despite conceding these two goals, Austria had the chance to recover and make up for the conceded goals as Hickelsberger had the opportunity to exploit Bronze’s wrong pass in a better way. Bronze was disturbed by three Austrian players in this action and therefore she was passing the ball in a hurry, making a huge mistake that could have led to an Austrian goal. Hickelsberger could have opted for a first-time shot since the pass was inviting at the edge of the box. However, she preferred to control the ball and bring it to the right before shooting. That’s how she got marked by three opponents and she wasn’t able to shoot in the way she wanted.

Such crucial decision-making abilities are key against such strong opponents and failing to opt for the most adequate decision at the right timing makes it complicated for teams to avoid defeats or draws. 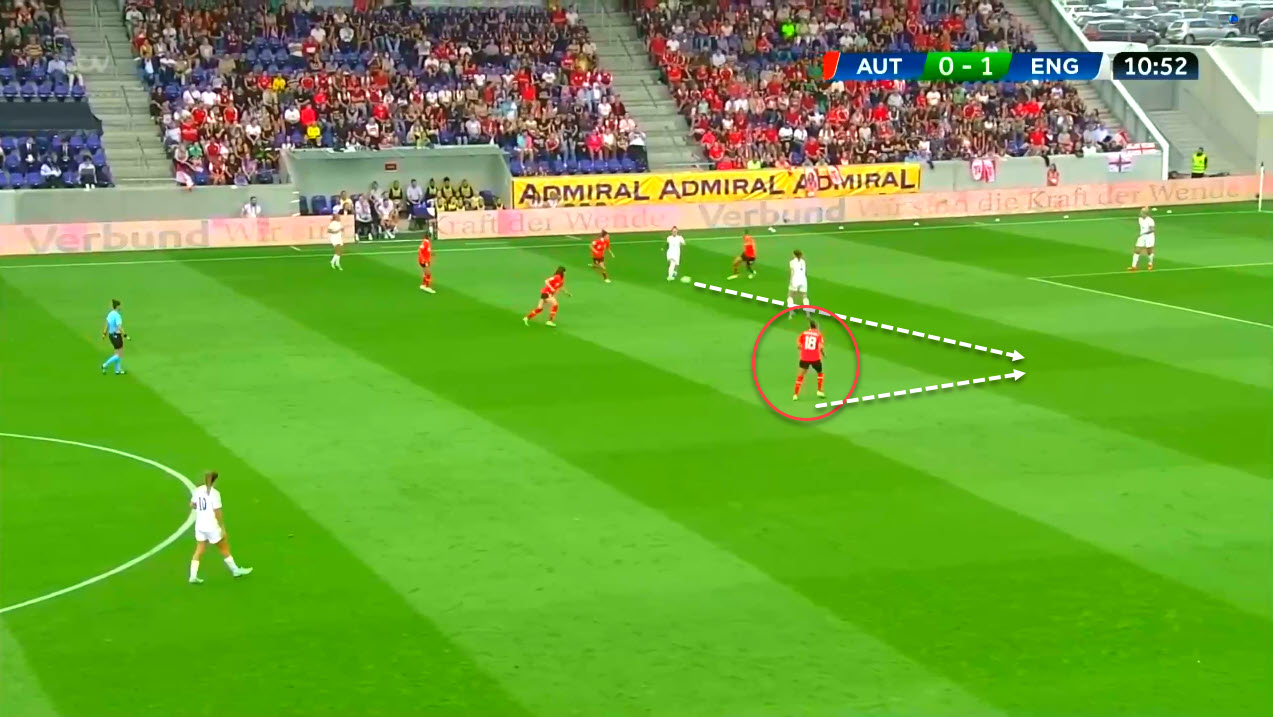 Austria missed other chances too mainly following some England defensive mistakes related to wrong passing, but couldn’t punish their opponent in the required way due to a lack of concretisation of the opportunities and also because the final pass accuracy was one of Austria’s issues during this game.

Improving their exploitation of opponents’ defensive mistakes following their pressing efforts would serve the team a lot in the future since they are good enough in terms of high pressing and can lead any team to commit some mistakes in their own half.

England showed once again that they are among the best teams in Europe and in the World at the moment and that they don’t intend to stop their development journey after winning WEURO 2022. On the contrary, the team is continuing to improve on most aspects in preparation for the upcoming Women’s World Cup, despite committing some worrying defensive errors.

On the other side, Austria will need to address some key elements before passing to the playoffs in order to increase their qualification chances and improve their team performances. These required improvements are mainly related to the defensive organisation and to the adaptability to complicated and sudden scenarios, the quality of the final pass, and the finishing and exploitation of opponents’ defensive mistakes.