“They were clinical in their chances, we weren’t,” – How Arsenal stole three points from Manchester United Women

Arsenal hosted Manchester United in a Friday night fixture at Meadow Lane in a critical match for both sides. Both Arsenal and Manchester United have fallen behind in the title race for the FA Women’s Super League, but this meeting is important to determine who will get the FAWSL spot for next season’s UEFA Women’s Champions League. Arsenal has struggled this season in key matches, claiming only one point from an available 15. Their struggles in these matches account for their 15 point deficit behind league leaders Chelsea LFC coming into this fixture.

Manchester United came into this match with a six-point lead on Arsenal for the third and final UWCL spot, but the visitors have struggled for consistency this year. They are attempting to secure European football for the first time since the team’s inception, but have missed some key personnel. A big miss has been Tobin Heath, who suffered a leg injury in early January that has ruled her out for at least three months. United hoped to replicate their previous meeting in November when they were able to secure a 1-0 victory with an 83rd minute goal by Ella Toone.

Arsenal coach Joseph Montemurro has continued to use the 4-1-4-1 that has allowed Arsenal to win their last three matches, including a 4-0 victory over Birmingham City LFC 12 days earlier. Arsenal is suffering several key injuries, particularly in defence, which forced some of the three changes in personnel. Both of their first-choice centre-backs, Leah Williamson and Jennifer Beattie, are on the sidelines with injury. These injuries caused a shuffling of the host’s midfield. Lia Wälti moved from midfield to centre-back,  partnering with Lotte Wubben-Moy. This meant Arsenal captain Kim Little returned to the side at holding midfield. The other change was Jordan Nobbs dropping to the bench, replaced by Jill Roord. Another key change for the Gunners was the return of Manuela Zinsberger in goal, replacing Lydia Williams, to make her first start since early February.

The visitors came into this match in mixed form, with three wins out of their six league matches since the start of 2021. Manchester United manager Casey Stone made two changes to her 4-2-3-1, which she also used in United’s 3-0 victory at home to Aston Villa on 7 March. Jess Sigsworth was replaced at striker by US international Christen Press, while Lauren James returns from injury to start on the left-wing over Kristy Hanson.

This tactical analysis will show how Arsenal created an own goal from pressing high early. This analysis will also show how Manchester United controlled possession during the match, and creating several quality chances that Arsenal was lucky to stop. Finally, we will look at how Arsenal’s second goal, and red card, allowed them to focus all of their attention defensively and close down the spaces for United to attack.

Arsenal started this match on the front foot and pressed Manchester United high up the pitch. From the initial kickoff, the visitors had trouble progressing the ball up the pitch. It wasn’t until after the first goal that United was able to control the ball in the home side’s half of the pitch. The opening goal for Arsenal owed much to the pressure they were able to apply.

In the first image below, Manchester United right-back Martha Harris receives the ball on the touchline and is immediately put under pressure by Caitlin Foord. In the second image, Harris retreats with the ball, as the Arsenal midfielders and forwards move to limit her passing options. Harris is forced to pass the ball weakly back to Amy Turner, but before the centre-back can receive the ball, Vivianne Miedema steps in front of her. 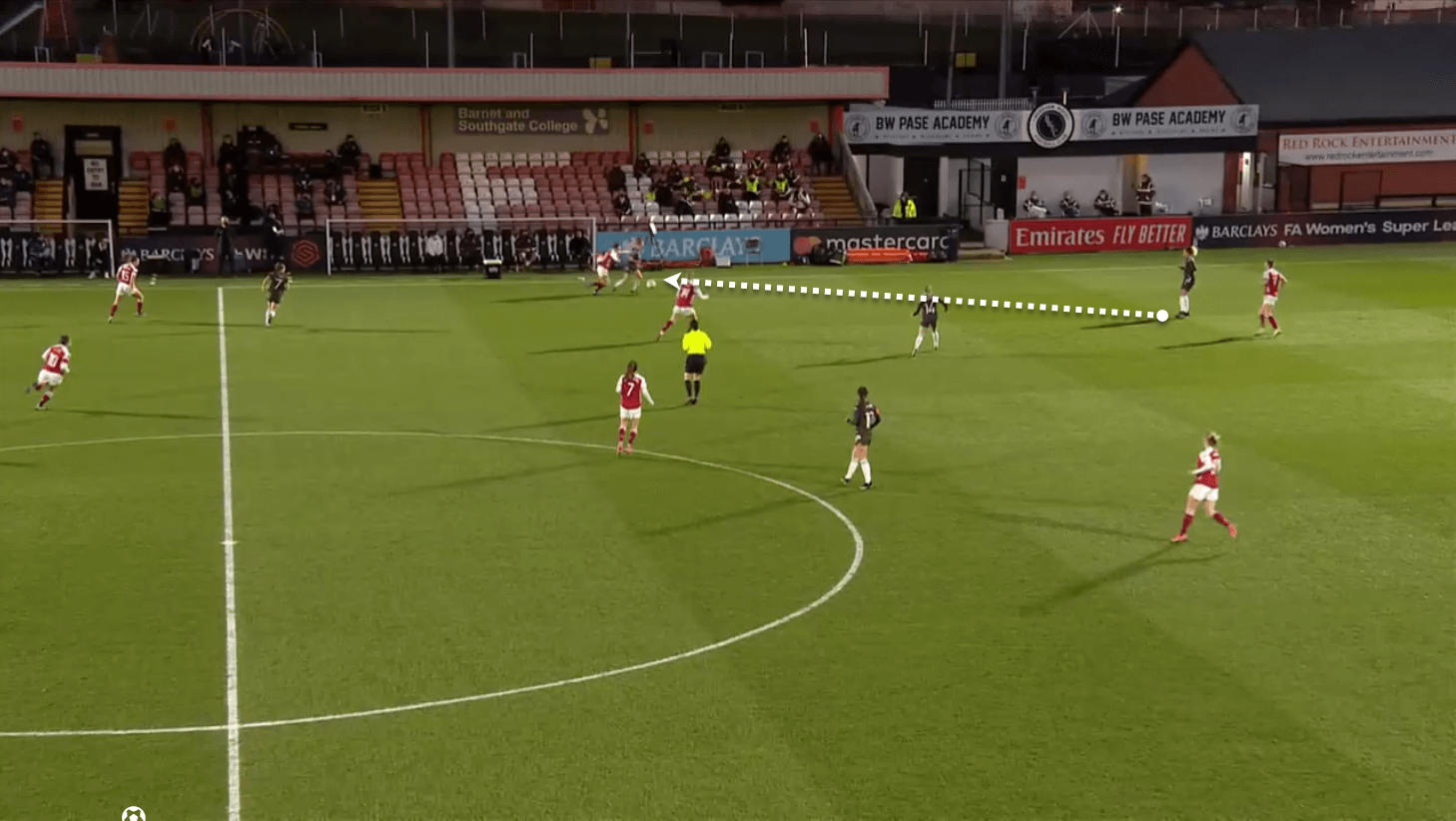 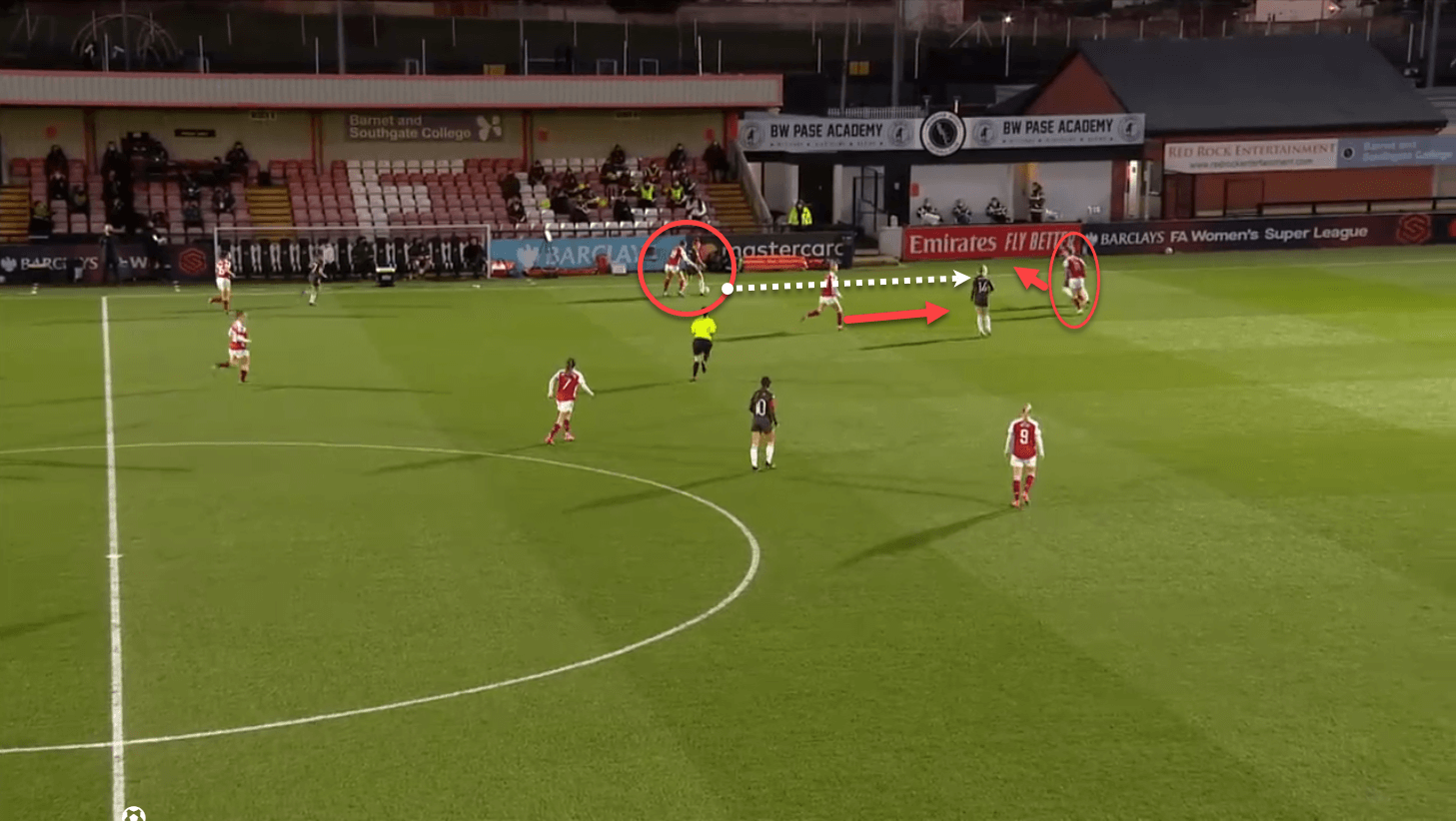 With the ball recovered so high up the pitch, and with Manchester United spread across the field during their build-up, Arsenal is left with plentiful options to launch their attack forward. In the image below, we can see Miedema has recovered the ball and lays it off to an on-rushing Foord. Foord now has the ball with no defender able to directly challenge her. This allows Foord to get her head up, and see the forward runs. Midfielder Jill Roord breaks forward in the left half-space, while Bethany Mead is in the middle of the pitch. In the second image below, we see that Manchester United midfielder Katie Zelem is forced to step forward to challenge Roord, leaving hectares of space for Roord to move into. Foord can slide a through-ball forward for Roord to latch onto. 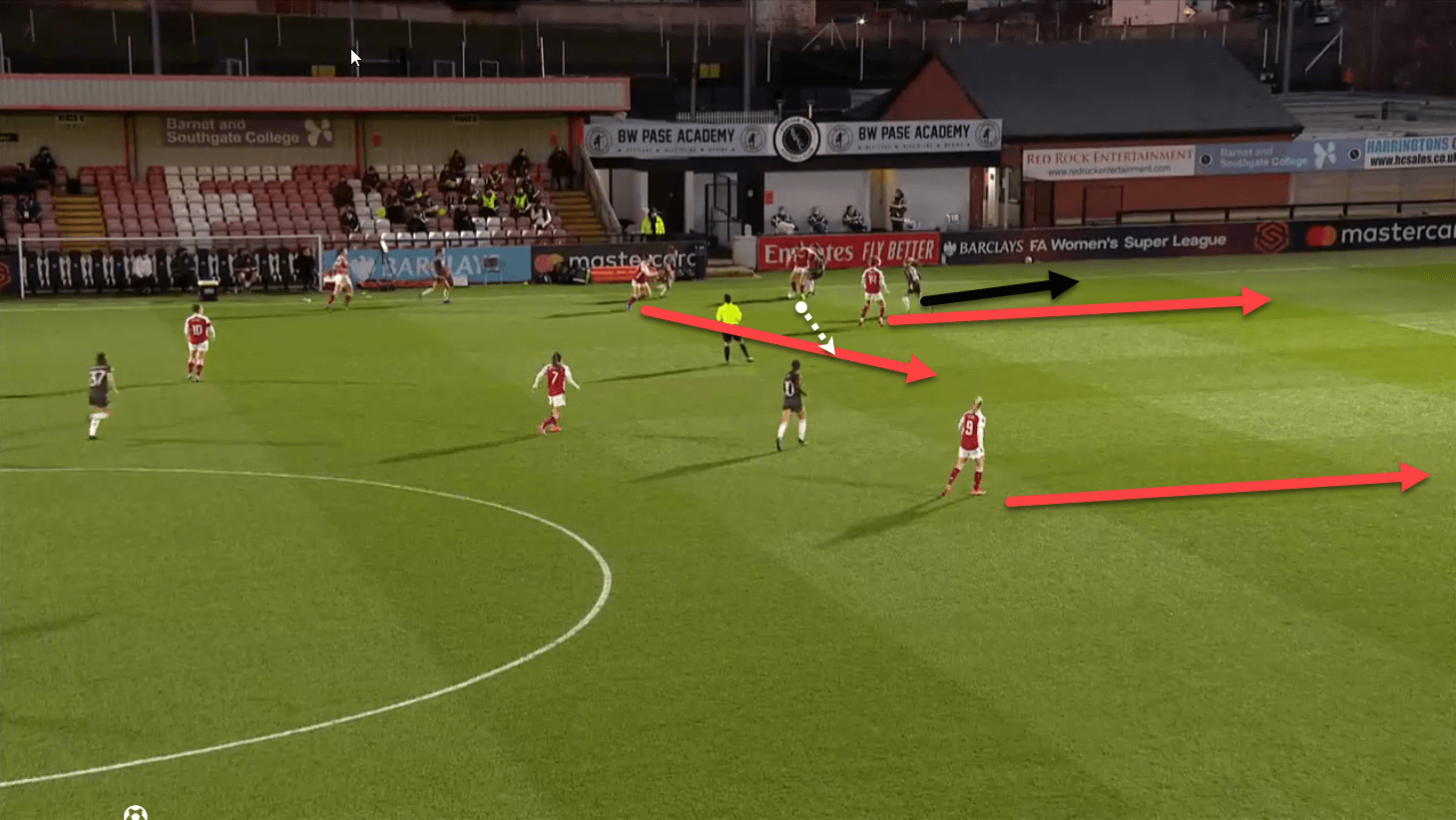 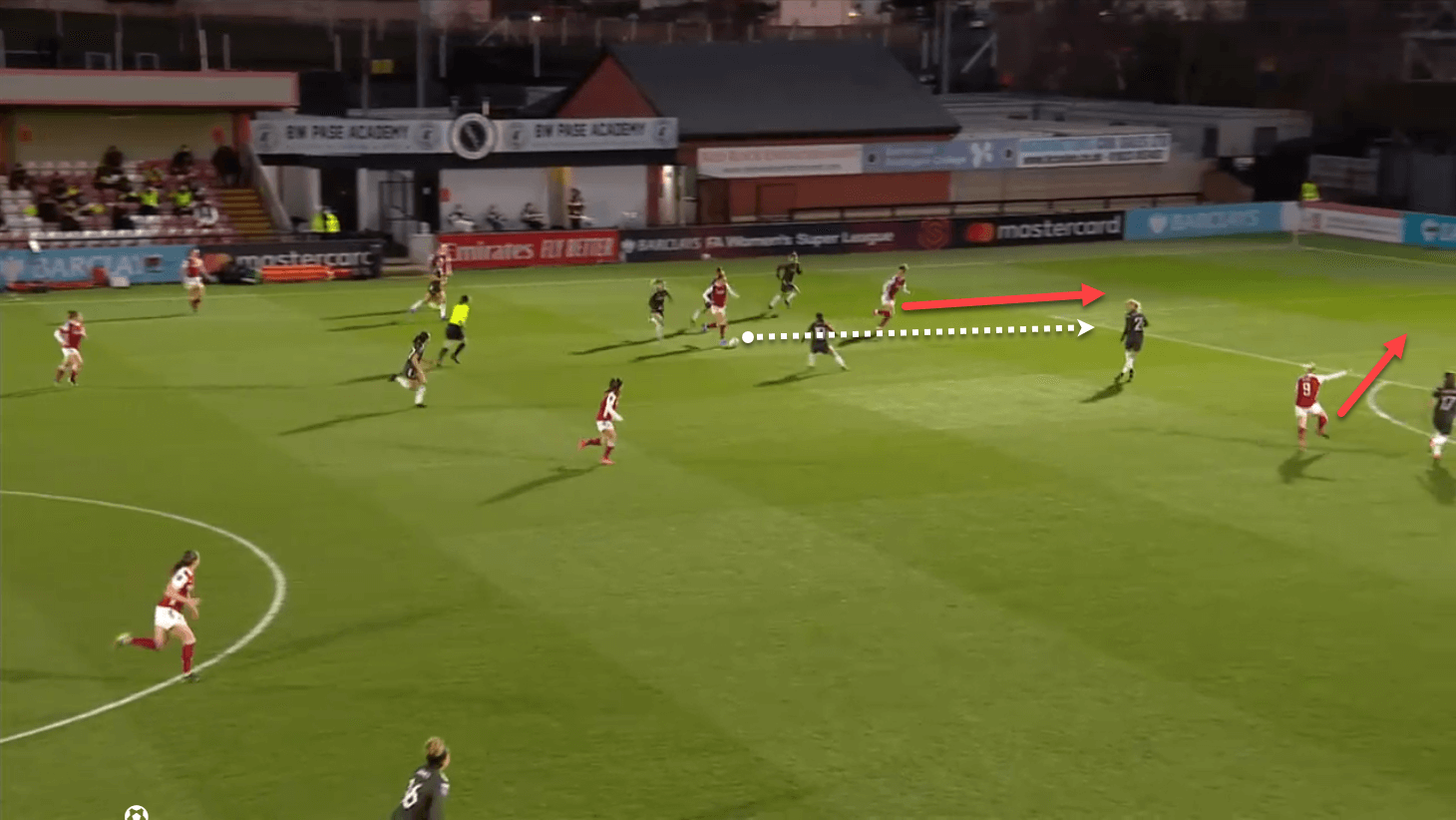 In the final image below, we see Roord has run onto the pass by Foord. Mead reverses her run, moving towards the back post. This forces Manchester United left-back Ona Batlle to mark her. When Roord tries to cross the ball to the back post, the ball deflects off of Millie Turner’s shin and loops into the net past a helpless Mary Earps for an own goal. 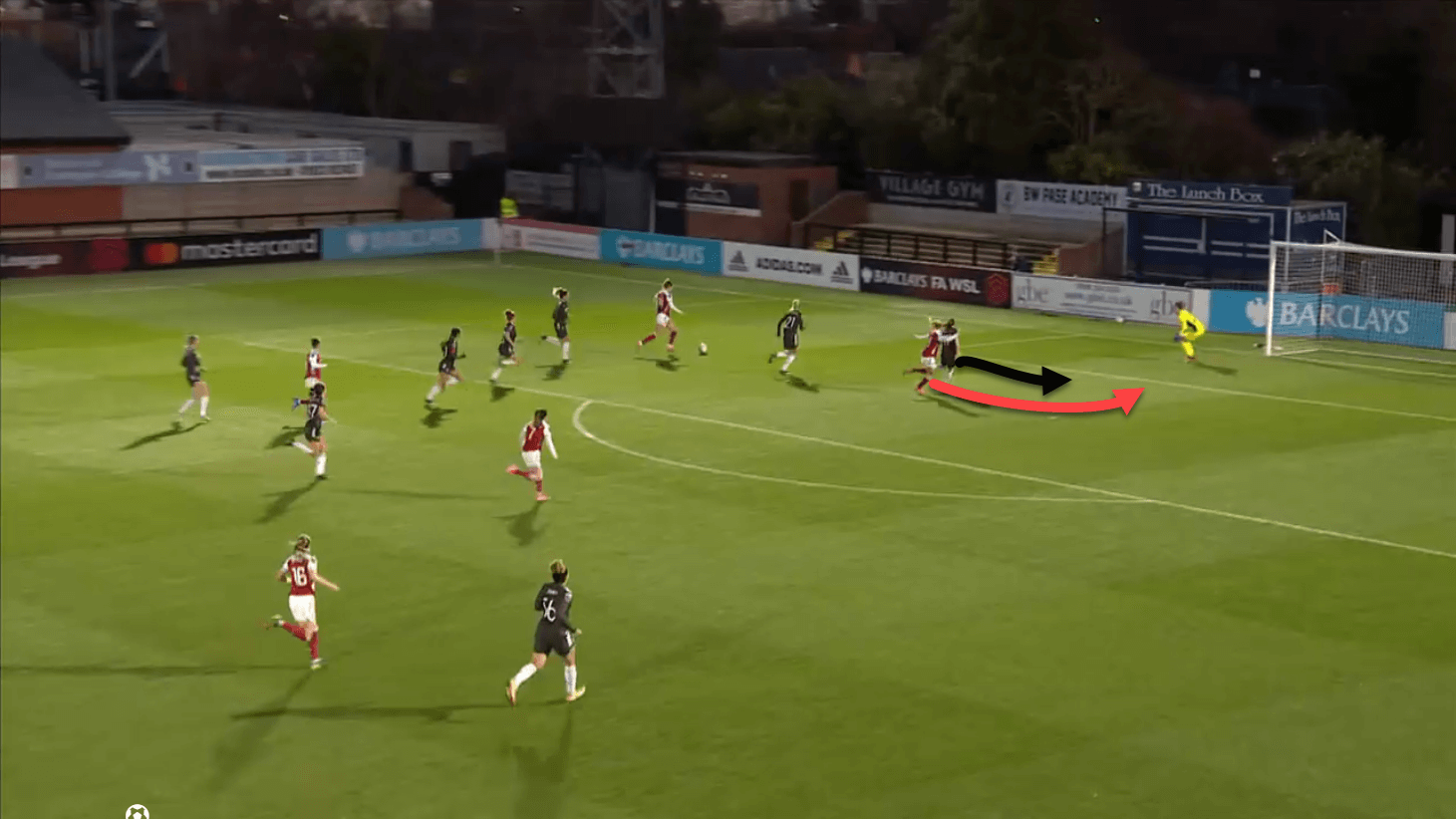 After the early goal, Arsenal stopped pressing United as high up the pitch. They were content to defend deeper, while still trying to make it difficult for the away team to progress the ball into the midfield. Casey Stoney’s side now worked to press Arsenal. One of Manchester United’s most effective players in this phase of the match was Jackie Groenen, who wasn’t afraid to press the backline from her position in midfield. One of United’s first chances of the match came from her work rate.

In the first image below, we see Groenen apply pressure on Jill Roord as she receives the ball from Wälti. With Christen Press also applying pressure, Roord has little choice but to play the ball back to Wälti. In the second image, we can see that Groenen has continued her pressing past Roord, and closes down Wälti. Groenen can block the pass, and the ball deflects to Press. This leads to Manchester United’s first shot of the match. 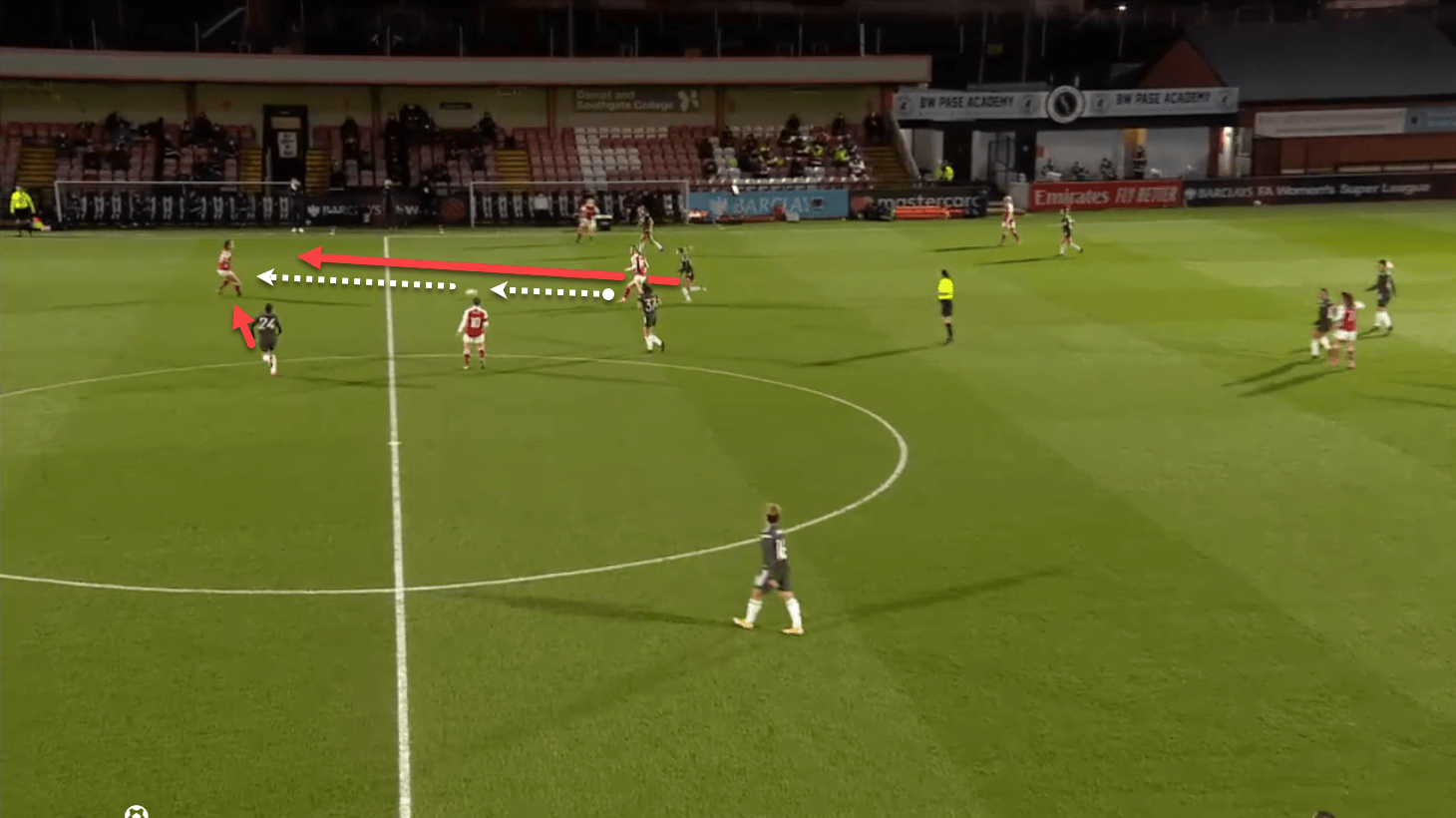 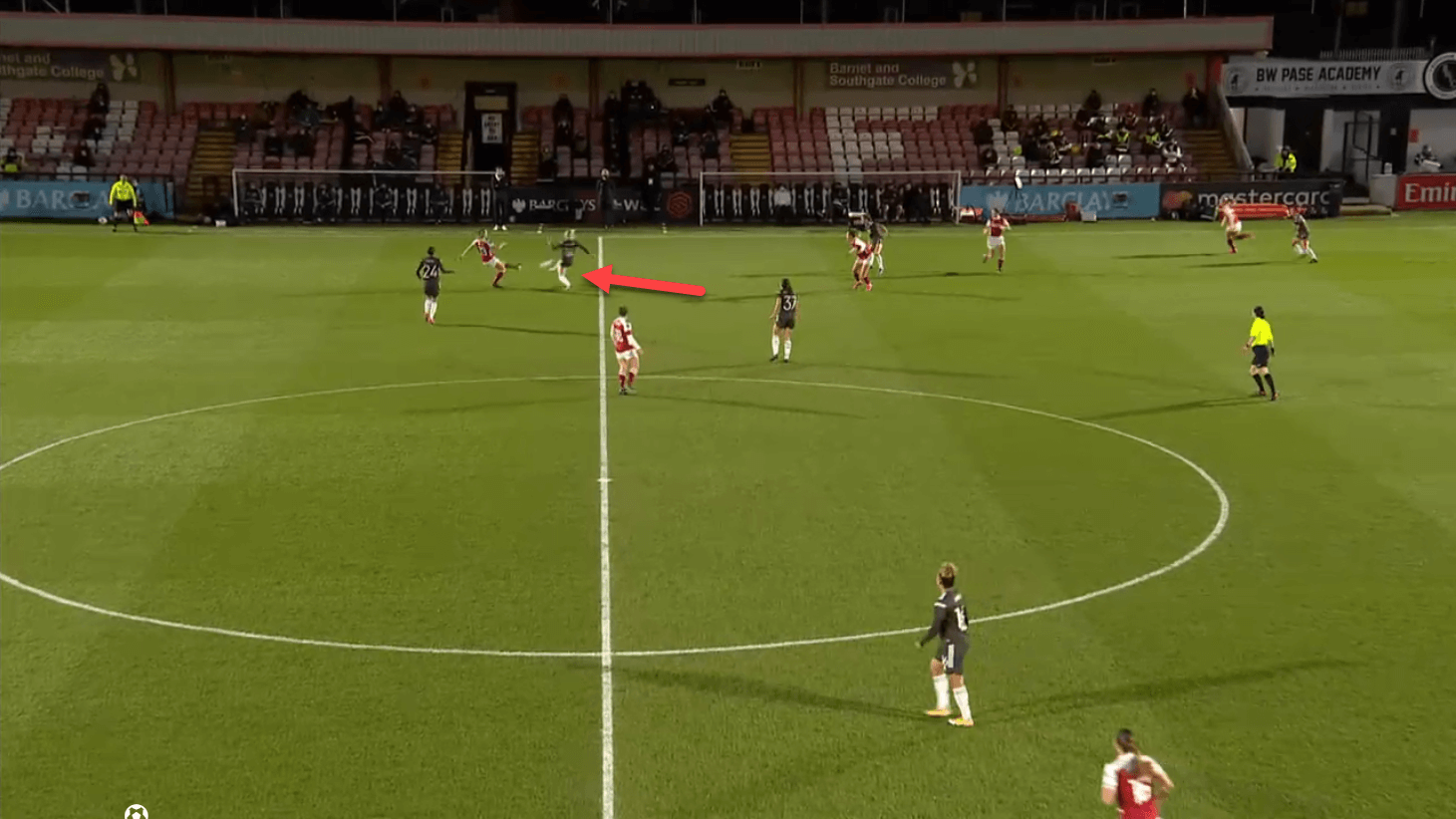 Arsenal stopped pressing high up the pitch, and this change in strategy allowed Manchester United to control more of the possession. United had some difficulties moving the ball from defence into the midfield, but they were able to craft a solution. With the defence having time on the ball, they looked to bypass the midfield and play the ball into the forwards. The most dangerous option was the 22-year-old former Arsenal youth product Lauren James on the left side, and most of United’s most dangerous attacks came down this flank.

Later in the first half Manchester United was able to force another excellent goal-scoring opportunity through their high press, and the work of Jackie Groenen. With pressure on the Arsenal backline, Wubben-Moy plays a slow, soft pass into Danielle van de Donk, who comes short to show for the ball. This is shown in the first image below, and the lack of pace on the pass allows left-back Batlle to immediately close her down. Under the challenge from Batlle, van de Donk falls to the ground and the Manchester United fullback wins the ball. 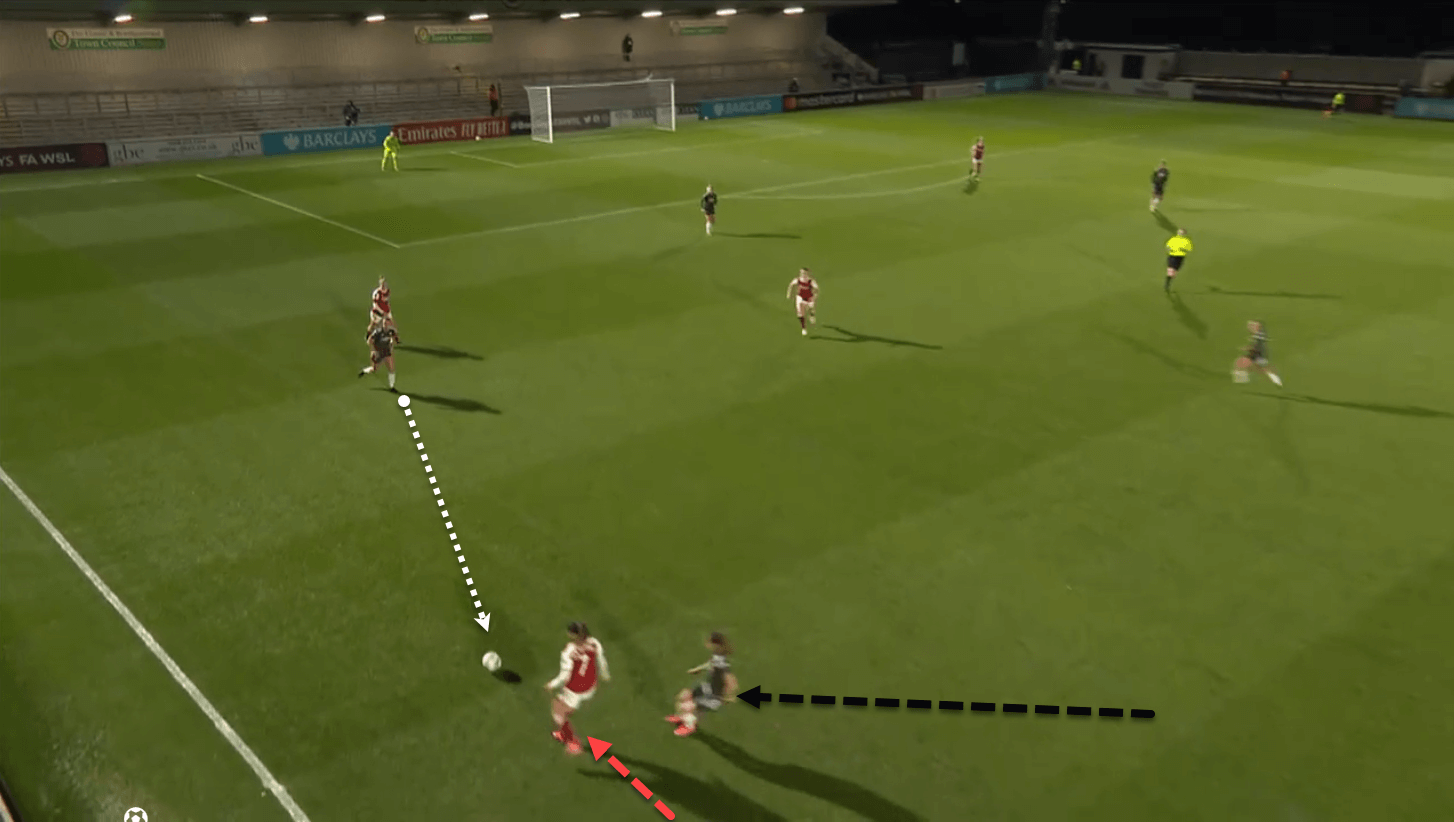 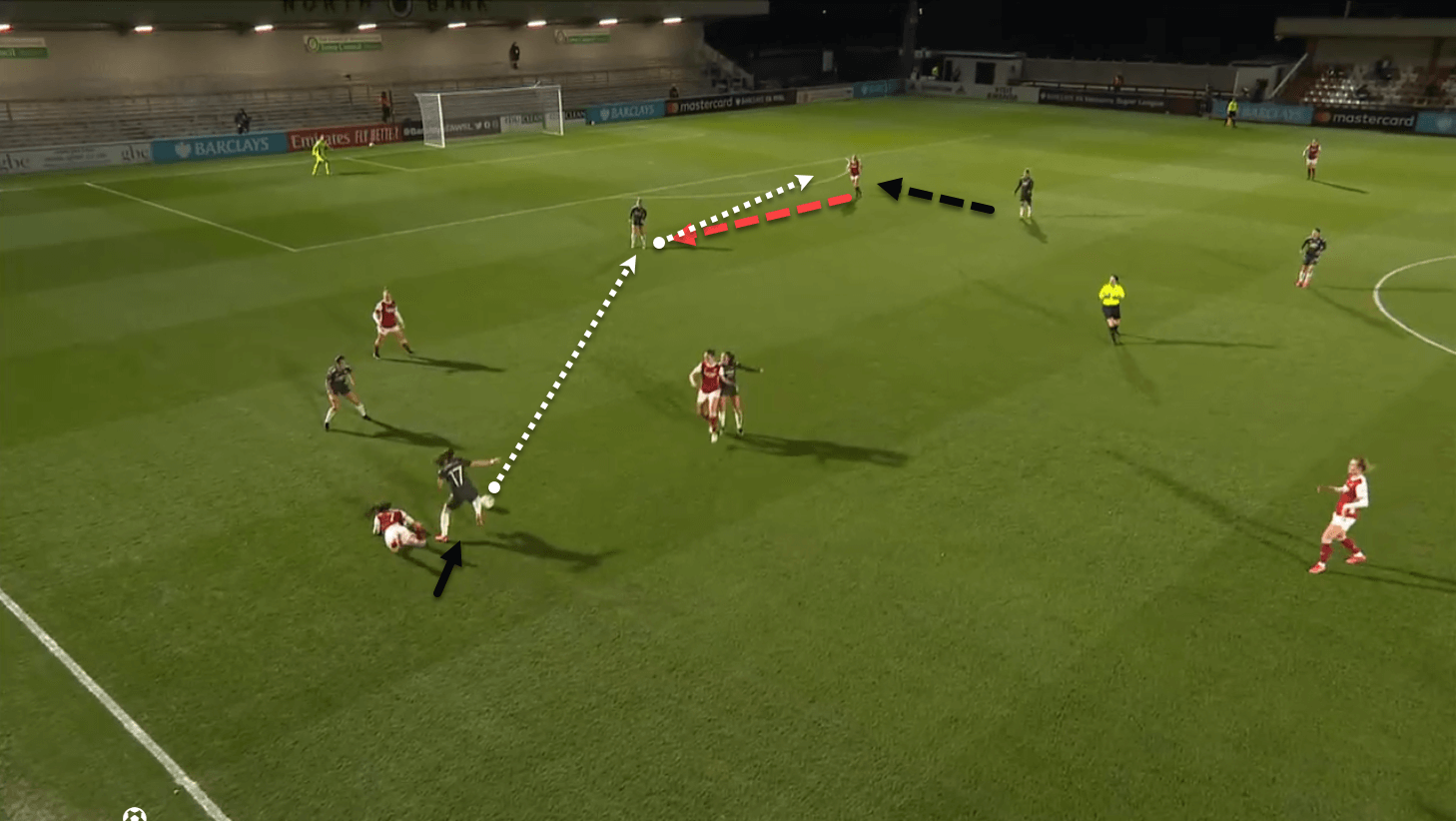 In the above image, Batlle has won the ball. She immediately passes up the pitch to Groenen, who is the most forward attacking option for the visitors. With Groenen receiving the ball, Wälti is forced to move across and attempt to mark the midfielder. This leaves Lauren James alone in a central position, and Groenen can find her with a simple pass. James has the ball in a dangerous position but isn’t able to capitalize on the opportunity due to poor finishing. This was a repeated theme throughout the match for Casey Stoney’s side, as they were able to recover the ball high up the pitch through their pressing and quick passes into the forwards, but their finishing let them down.

A second goal, followed by a red card, meant Arsenal could park the bus.

Arsenal was able to get to half-time with their 1-0 lead intact. As the second half started, it looked like it was going to be another 45 minutes of difficult defending from the home side. Their task got easier in the 52nd minute when Lotte Wubben-Moy was able to double the Gunners lead from a corner. Less than 10 minutes after taking a 2-0 lead, Arsenal was reduced to 10 women after Bethany Mead picked up her second yellow card of the match. It may seem counterintuitive, but having somebody sent off seemed to make the rest of the match easier for Arsenal. 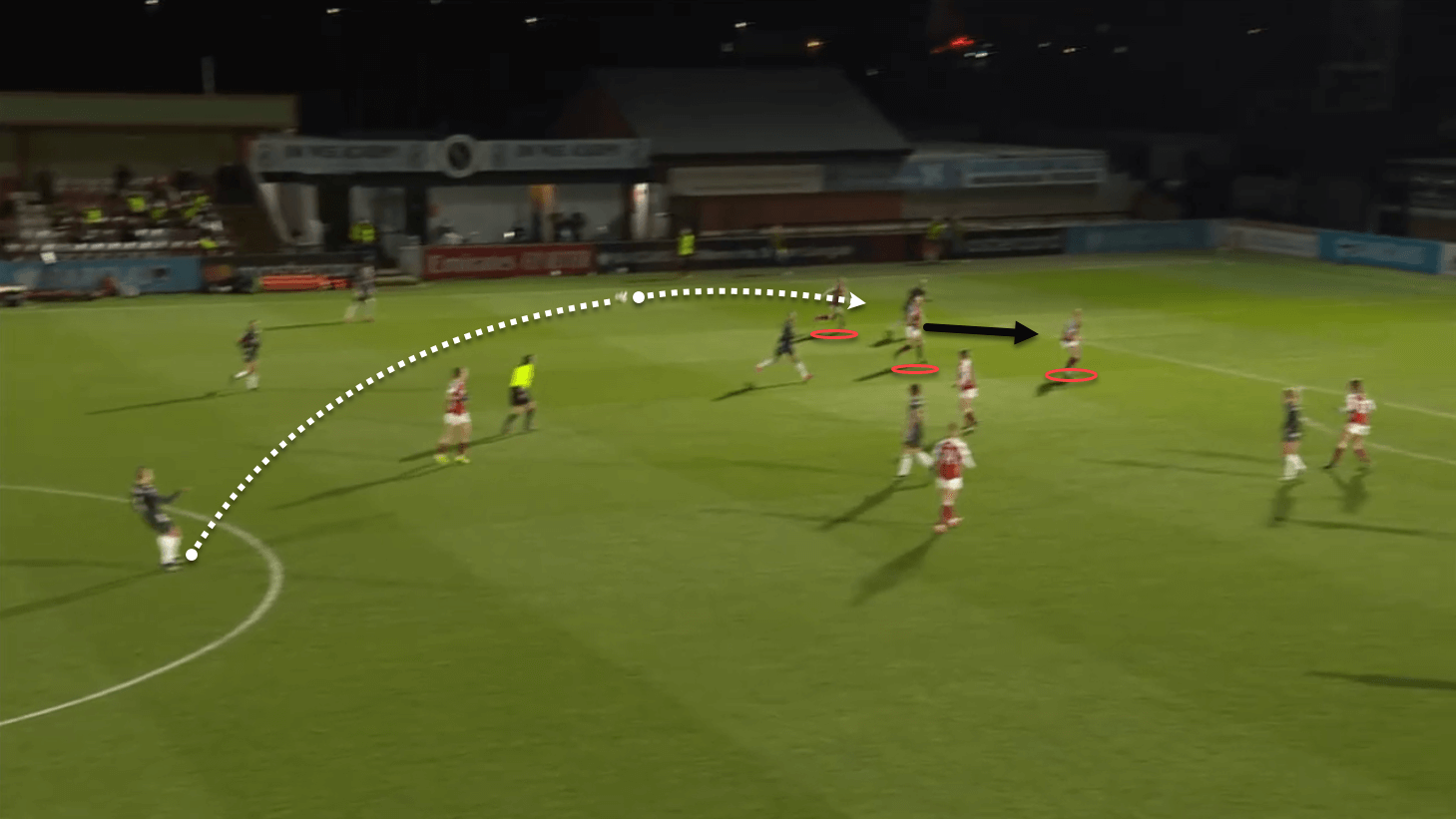 The home side was no longer tempted to try and press higher up the pitch and was content to just sit in a deep block. This meant that United’s pacy attackers could no longer try and get behind the defensive line. As we see in the image above, United tries to play a ball that they had success with throughout the first half. The centre-back attempts to play a lofted ball over the Arsenal backline, for James to run onto. With the deeper line and more support, there are three Arsenal players ready for the pass and they easily cut out the play.

It also meant that Arsenal no longer tried to play out of the back, and played more long balls. In the graphic below, we can how the change affected Arsenal goalkeeper Manuela Zinberger. In her previous start against Manchester City, she only attempted three long balls in the match, while against Manchester United she attempted 19. With the ball going long, Manchester United couldn’t press Arsenal’s backline and recover possession high up the pitch. They had to recover the ball in deeper positions and had to try and progress through a more organized Arsenal block. 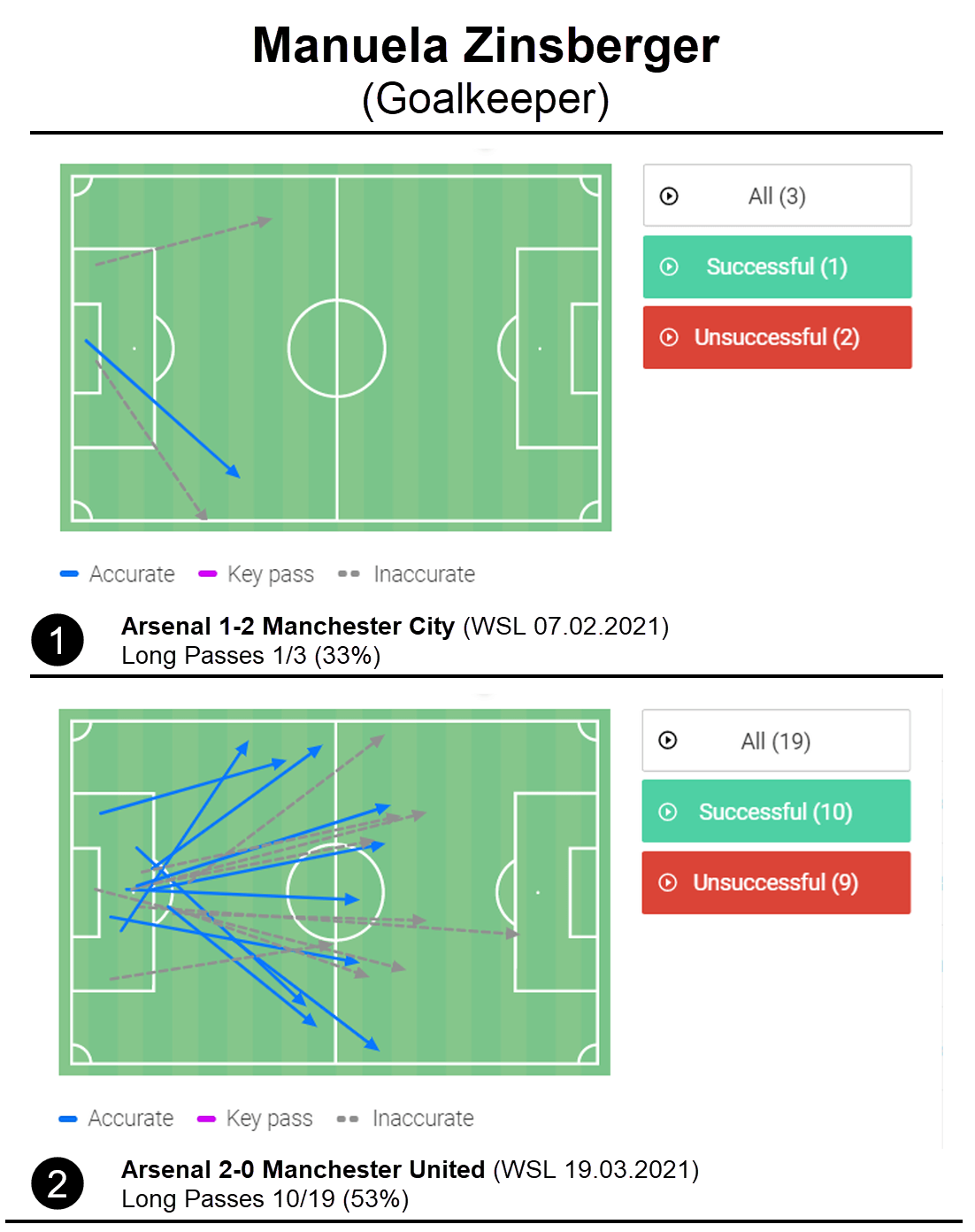 After the red card in the 62nd minute, Manchester United was unable to muster another shot on goal. The red card allowed Arsenal to focus solely on holding their position and restricting the space that United’s forwards had to work in. With tighter marking and fewer gaps, the visitors were unable to craft any chances. The home side was able to cruise easily in the final 30 minutes, keeping the ball in front of their block as United showed no ability to break down the defence.

These were an important three points in Arsenal’s season, as they try to ensure they have European football next season. Losing this match would have left them nine points behind Manchester United, as the visitors looked likely to book a place in the UEFA Women’s Champions League after only a few years in existence. This was the first time this season that Arsenal has been able to claim three points in an important match, while Manchester United continued the inconsistency that they’ve dealt with since the beginning of the new year. Both sides look to be out of the title race, but this match means that the battle for the third European spot will probably come down the last few weeks of the season.