Yet again, Ireland faced off against Denmark in a Euro 2020 Qualifiers match of utmost importance; the winner would automatically qualify for the 2020 UEFA European Championship. Two years ago, these two sides met in a critical 2018 World Cup playoff matchup. In the second leg, Christian Eriksen scored a hat-trick as Denmark devastatingly defeated the Irish 1-5 in Dublin. Since then, the two nations have faced off three times, drawing all three. While the result was again a draw this time around, Denmark would yet again go through as they stood two points ahead of the Boys in Green coming into the match. This tactical analysis will examine the tactics of both sides and offer an analysis of how Denmark coped against Ireland’s overall solid performance. 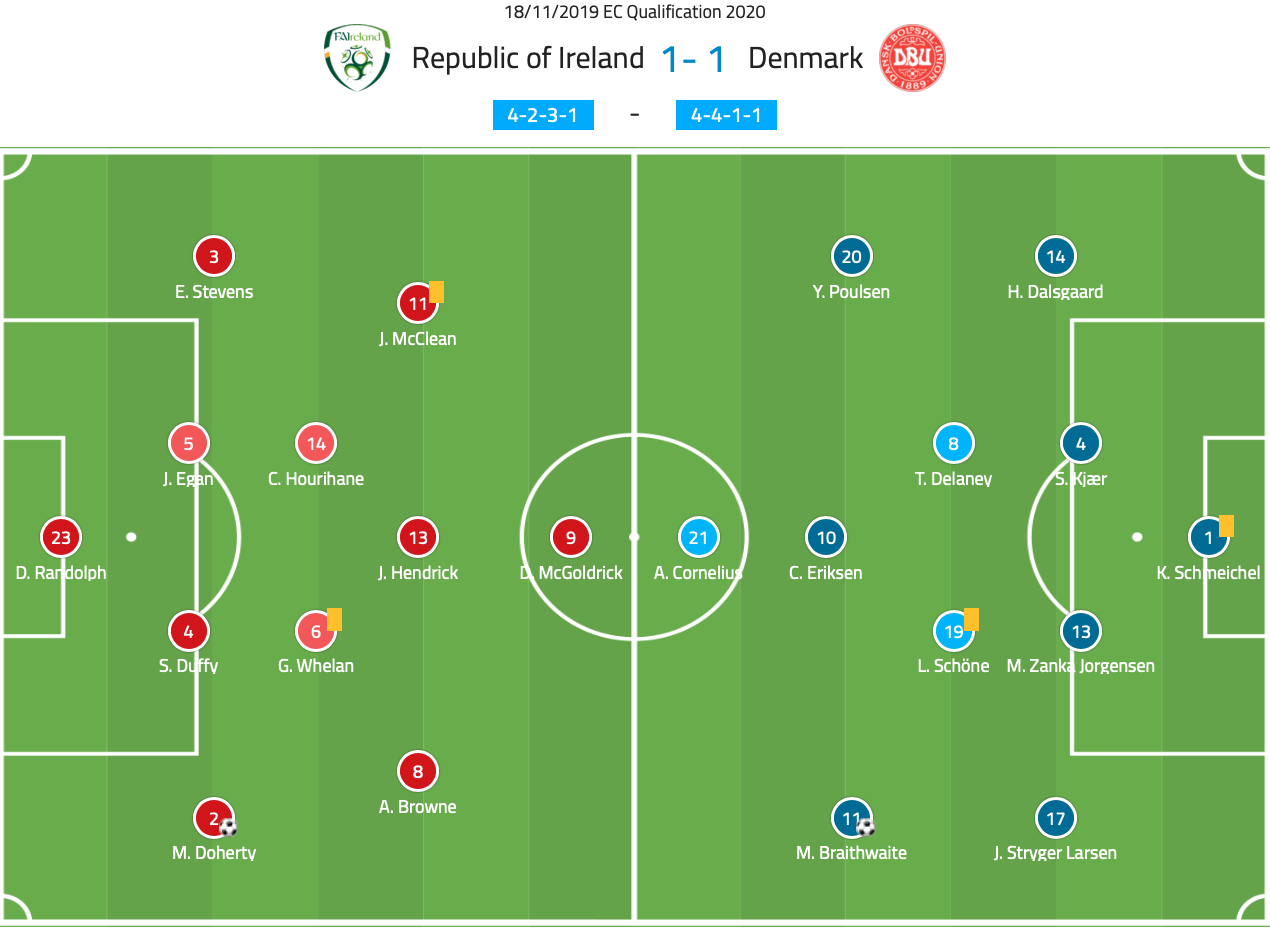 The hosts lined up in a 4-2-3-1 formation. Ireland had a few members missing from the squad, including Seamus Coleman due to a suspension, and Derrick Williams, who scored his first-ever international goal against New Zealand last week, out with injury. Manager Mick McCarthy, who had guided Ireland to the round of 16 in the 2002 World Cup in a previous stint with the team, handed Matt Doherty the starting right-back spot in Coleman’s place. Captain Shane Duffy, John Egan, and Enda Stevens completed the back four. Ireland’s midfield five included Glen Whelan and Conor Hourihane occupying the deeper areas, with Alan Browne and James McClean in the wide attacking areas alongside Jeff Hendrick. Sheffield United striker David McGoldrick began up top as the lone striker.

Denmark set up in a similar formation but attempted different movements in and out of the structure. Henrik Dalsgaard and Jens Stryger Larsen started as the full-backs, next to Simon Kjær and Zanka, who was making a surprise start over Chelsea centre-back Andreas Christensen. Thomas Delaney and Lasse Schöne defended the central midfield areas, with a four-man attack of Yussuf Poulsen, Martin Braithwaite, Christian Eriksen, and Andreas Cornelius ahead of them. Both Delaney and Cornelius however would be subbed off relatively early with injuries and were replaced by Pierre-Emile Højbjerg and Kasper Dolberg respectively. 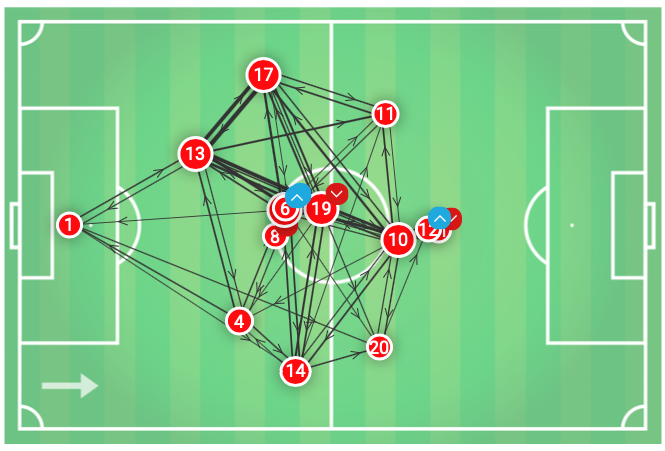 Via Denmark’s pass map however, we can see how the movements of the forward players actually resulted in a differing shape. The primary distinction is Eriksen’s forward positioning, which is nearly parallel with the strikers’. There are two similar reasons behind this movement; Denmark actually defended in a 4-4-2 shape, and their front pressing required the midfielder to push forward into these areas.

Front pressure and the defensive block

The two tactical setups of both these sides had defensive differences but similarities in attack. Denmark organised slight front pressures out of possession, which at times moved into the opposition’s half. 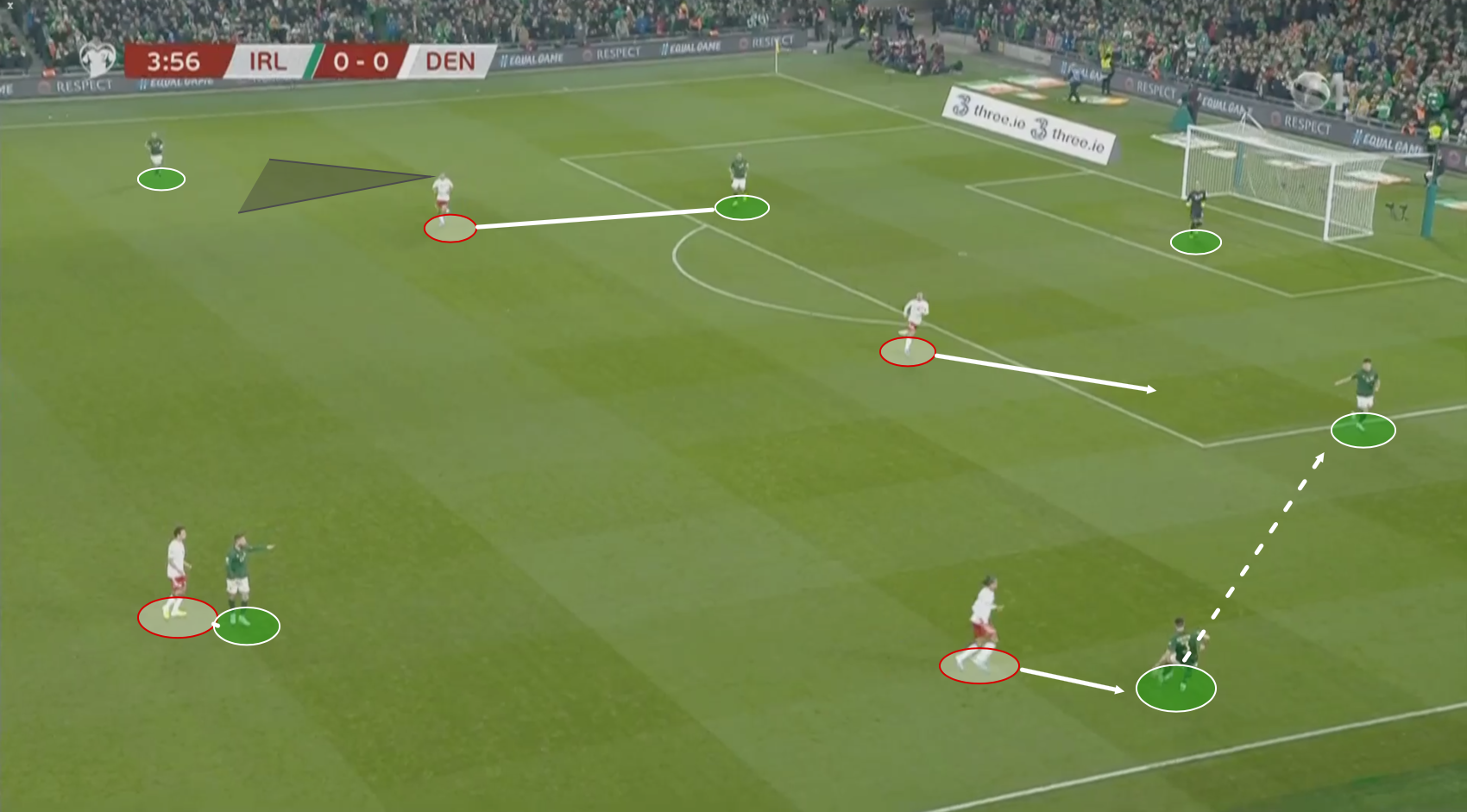 Ireland rarely pressed early and instead began the match using more of a structured defensive block. This limited Denmark’s attacks for a majority of the match, at varying levels of the defence. 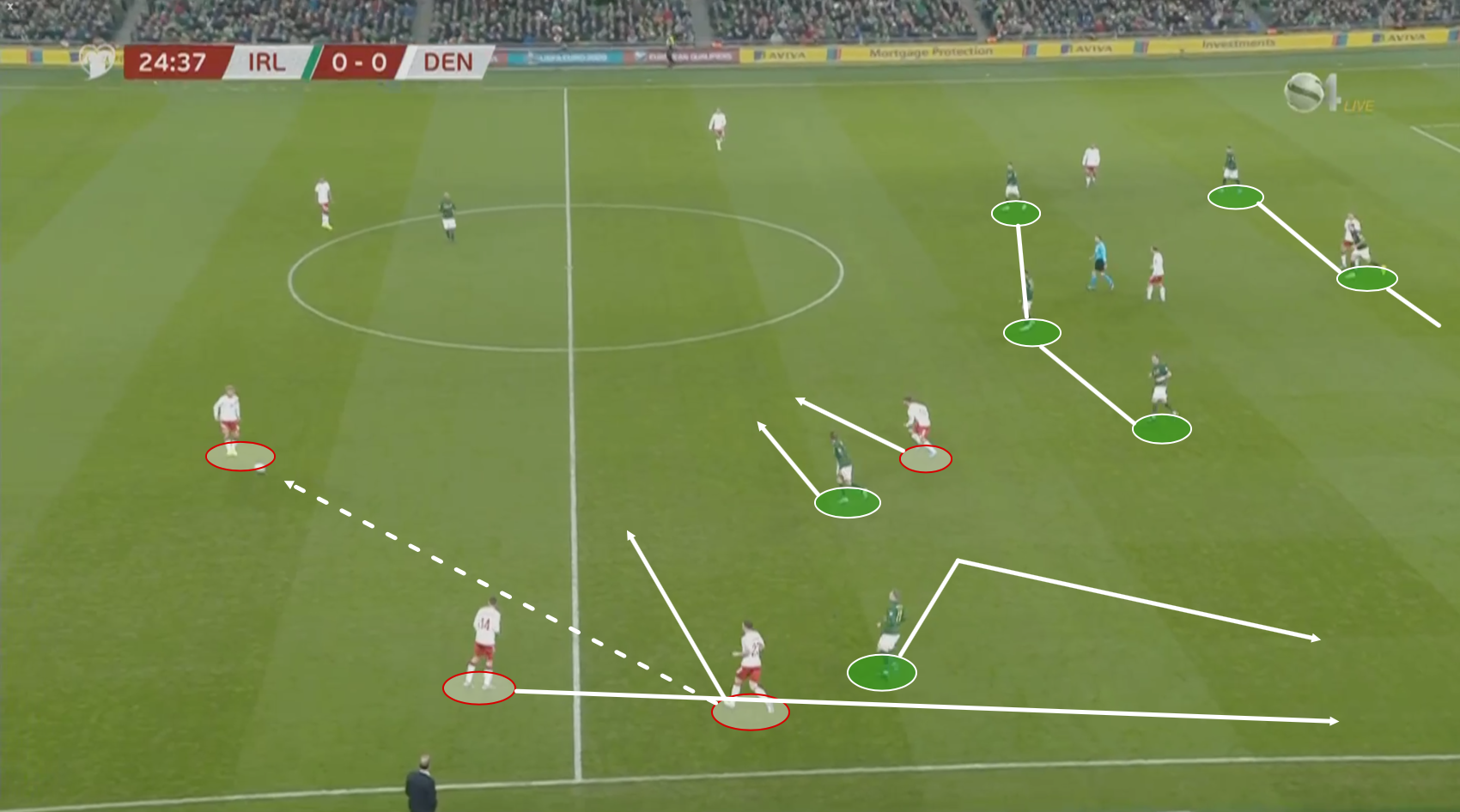 Ireland’s defensive lines were strong at keeping solidity and using multiple levels to end Danish attacks. In the example above, Hendrick marks the midfield outlet as he shifts centrally. Højbjerg completes a back-pass to the centre-back then moves into the half-space that the midfielder left. The idea of these inward possession movements is to create space wide and allow the full-back, Dalsgaard, to make a wide run down the left side of the compact block. McClean however, who had been marking Højbjerg, maintained his width. Even though Dalsgaard was able to receive the ball down the flank, McClean was able to deflect the cross out of play.

In addition to overall poor possession play, Denmark’s press wasn’t terribly effective. A number of times the press was able to be bypassed via open areas in the wide and half-spaces. 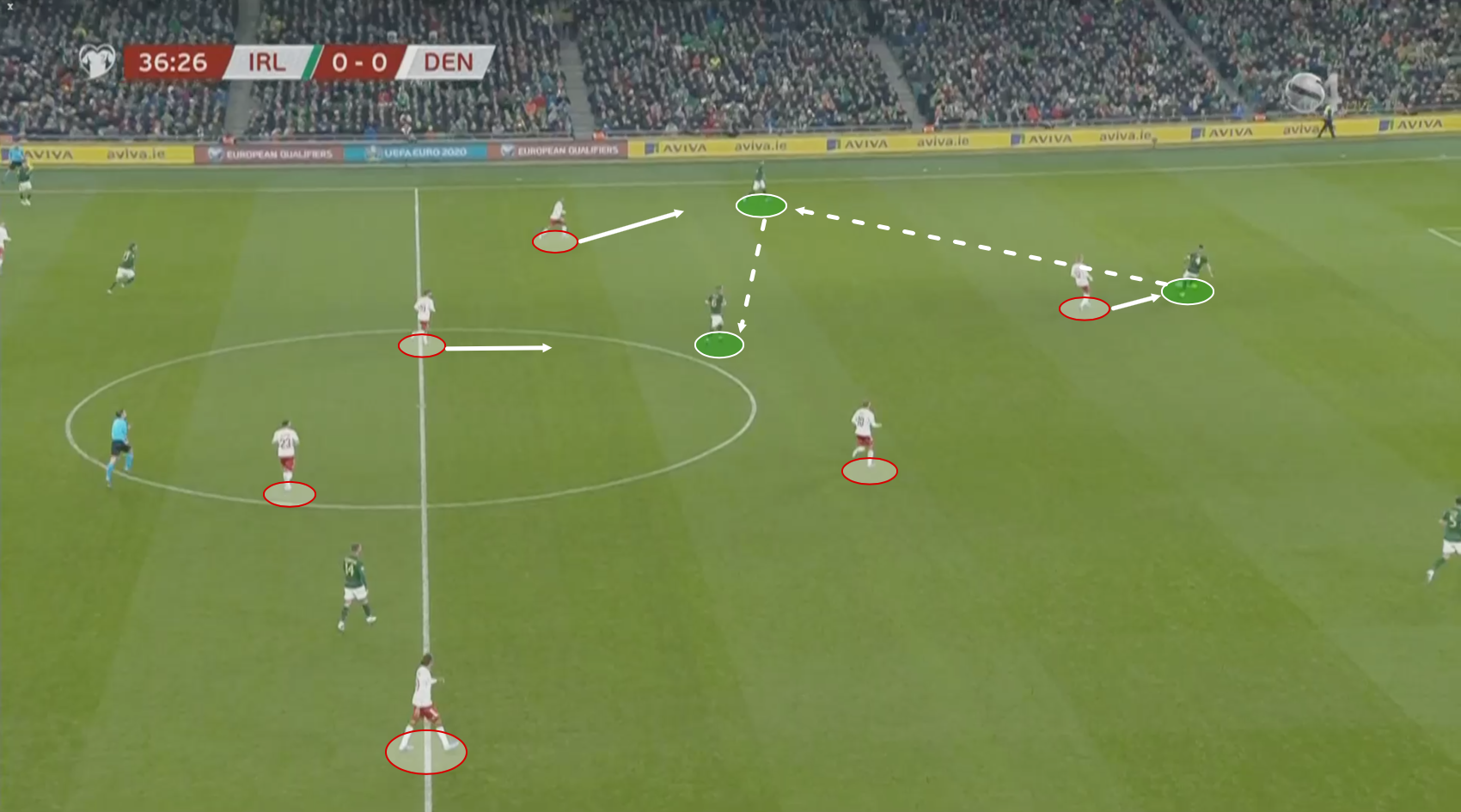 Here, with Ireland in possession, Denmark initiate a front press. This pressure however isn’t aggressive enough, and Ireland have ample time to diagonally progress the ball. Duffy passes wide to Doherty, who controls it with one touch and quickly completes the diagonal progression back into the half-space to Whelan.

Ireland primarily played the ball out from the back this match, and combined with the poor opposition press they are able to hold possession into the attacking half. Initially this began with long balls over Denmark’s press. 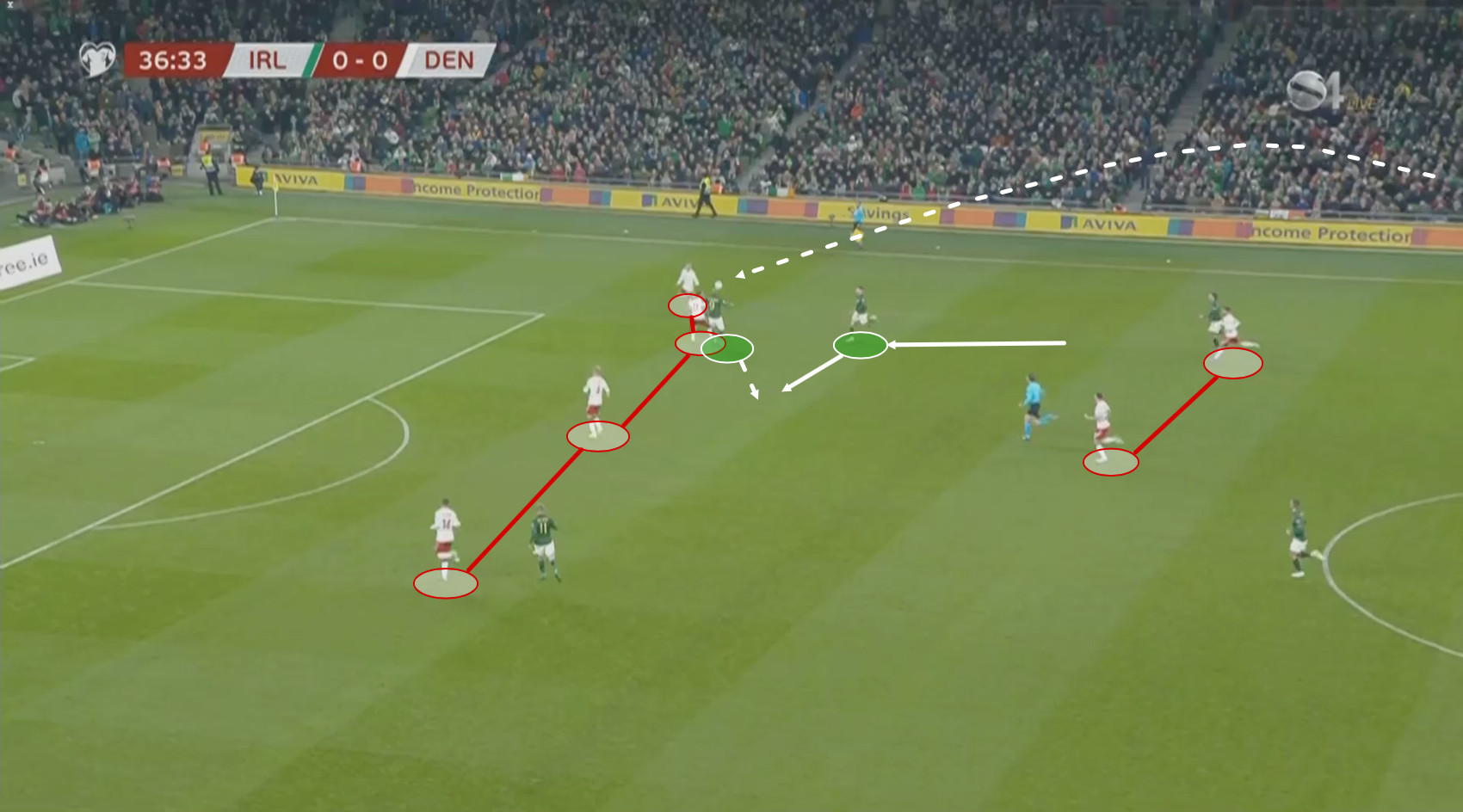 As a continuation of the previous figure, Whelan hits a long ball over Denmark’s front press and high midfield. Thanks to the press, there is space available to exploit between the two defensive lines. McGoldrick does well in hold-up play to bring down the long pass and lay it off to Browne in the half-space, who fires a shot just barely past the far post.

Ireland were so effective at getting around Denmark’s press and progressing the ball, that the visitors eventually opted to defend in their own half and allow Ireland possession. In these situations, Ireland were again able to progress using wide combinations, this time farther down the pitch. 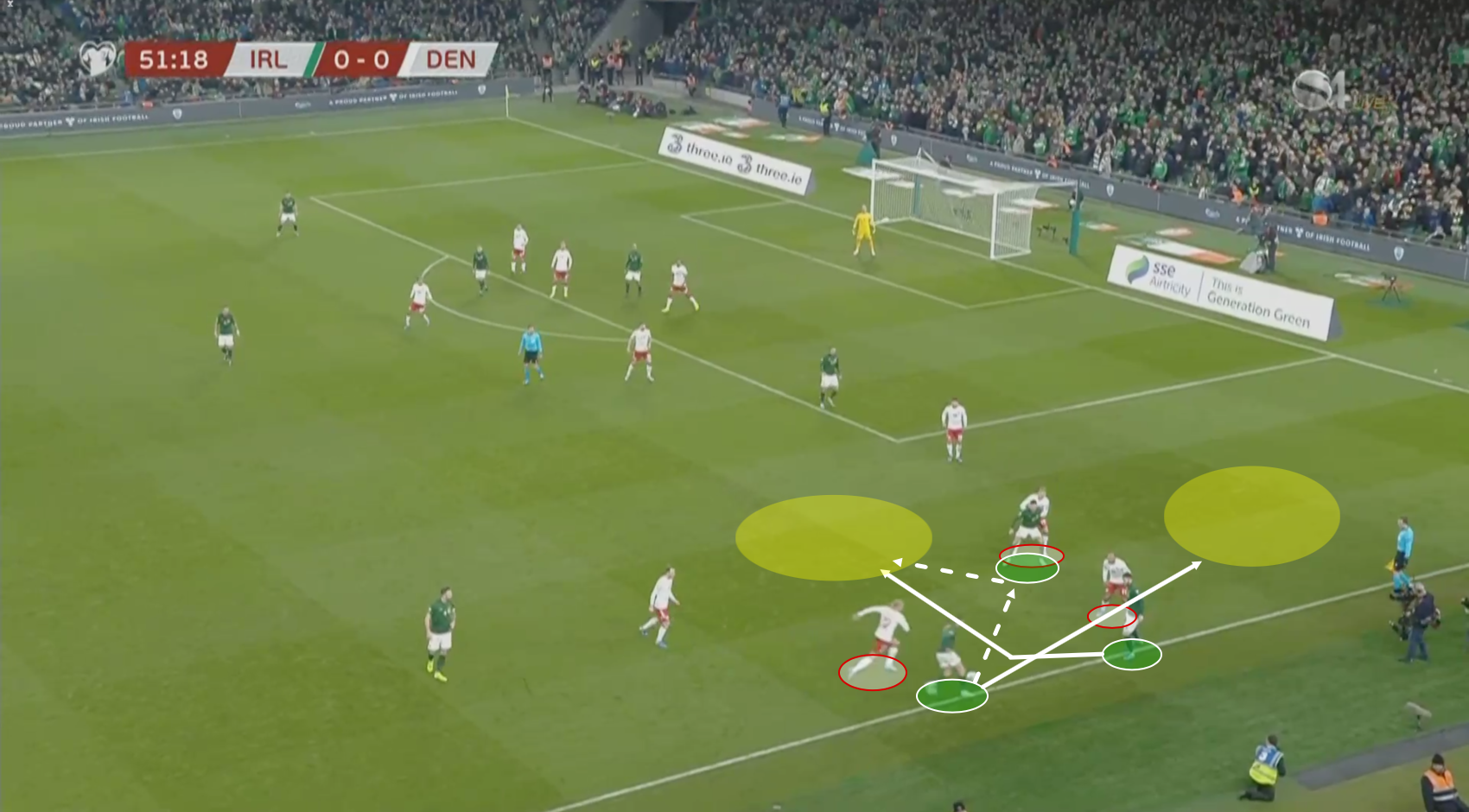 In the example above, we can see Ireland use another full-back to midfielder combination. With Doherty positioned high, Hourihane passes the ball inside to Browne. Doherty and Hourihane then make crossing runs past each other, forcing the defenders to commit. The Danes aren’t able to successfully pick up the other player, and Doherty receives the ball on his inside run toward a dangerous area. 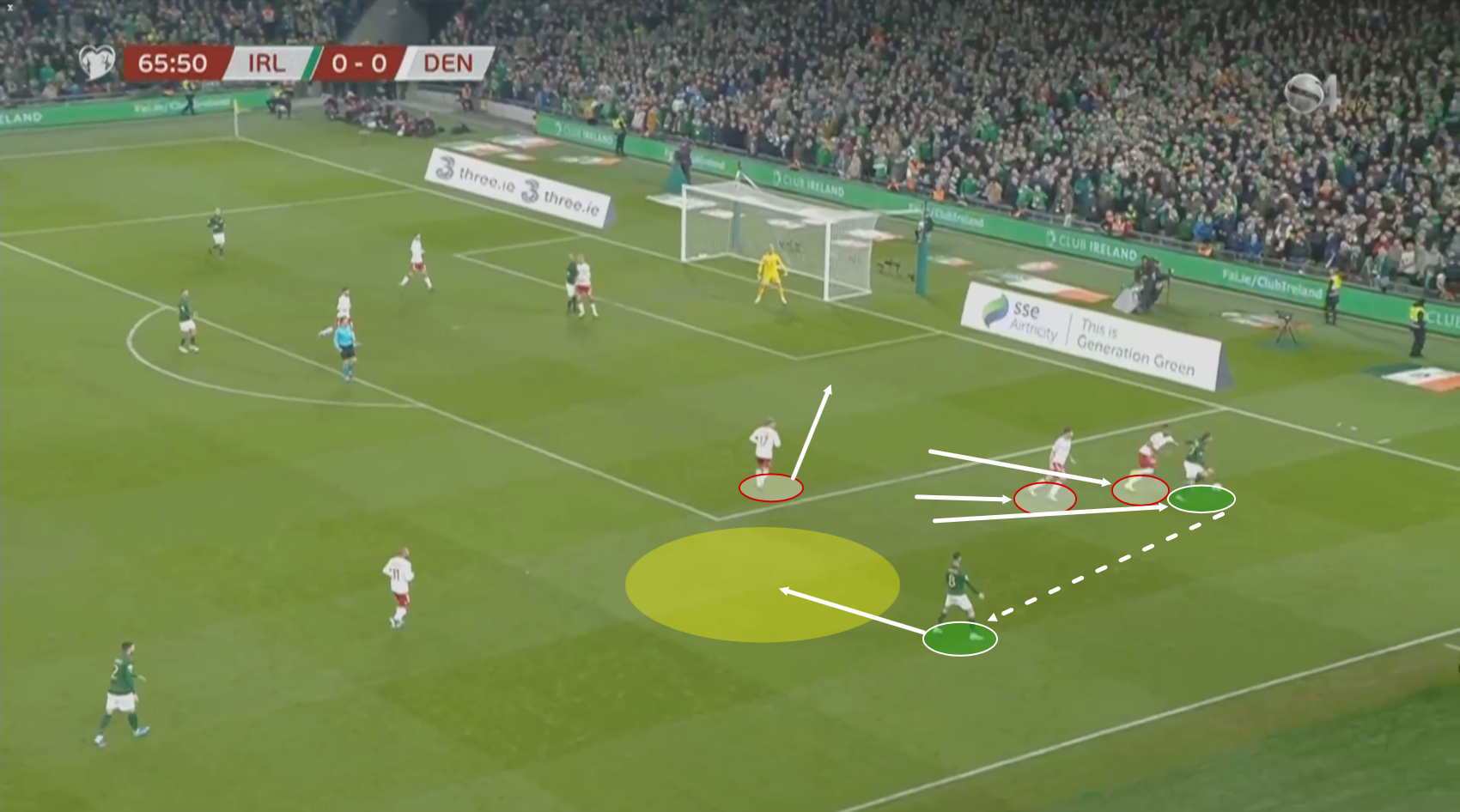 In this example, Ireland possess the ball again in the wide areas. Hendrick dribbles the ball down towards the bottom right corner, pulling multiple defenders with him. The full-back, Larsen, drops inside to cover Zanka’s space. This however opens up space for Browne, who receives the back pass and dribbles centrally towards the box.

Overall, Ireland controlled much of the second half. As a result, Ireland statistically dominated shot numbers, with 15 to Denmark’s three.

With Ireland so comfortable in possession in the attacking half, Denmark attempted long balls and quick attacks over Ireland’s high backline. Fortunately for the Red and White, this provided enough opportunities to push Ireland back and break the deadlock. 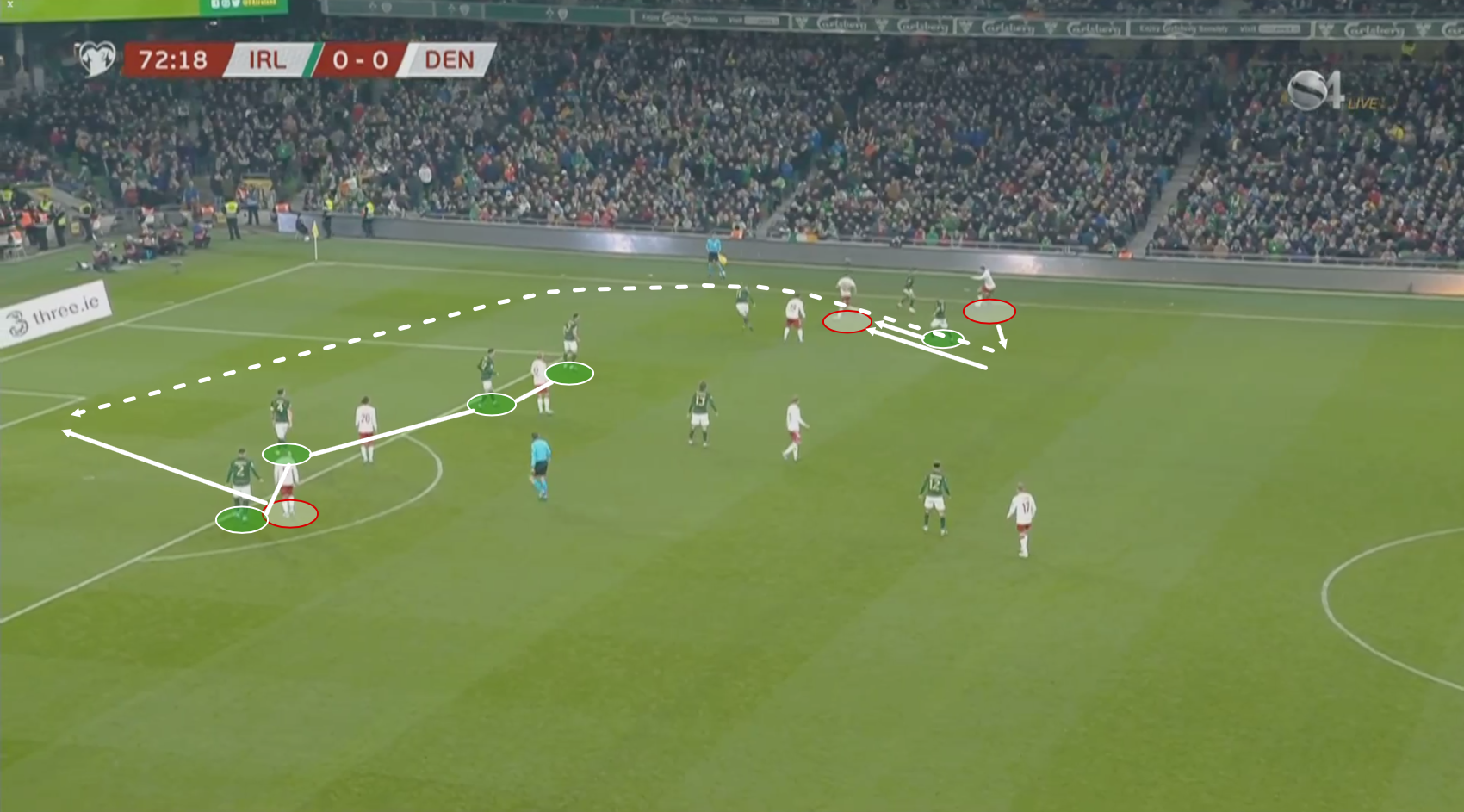 Dalsgaard receives the ball from Højbjerg, who continues his underlapping run inside the full-back down the touchline. This lures his marker with him, and gives Dalsgaard space to cut back and send a long ball over Ireland’s defensive block. Braithwaite makes a run down into the box, and Doherty’s ball-watching leaves the Leganés attacker open for a goal.

Other than the goal, Ireland’s defence was excellent in shielding dangerous areas in the defensive third, but their attack struggled to form high-quality chances. The major obstacle Ireland often found on their crosses in the final third was Denmark’s defending of the near post. Many of Ireland’s crosses were shallow and thus were easily cleared by Denmark’s bunching of defenders at the near post. 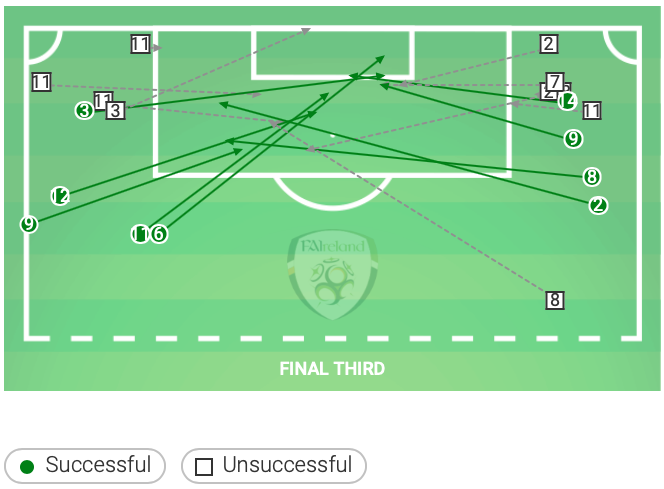 As you can see in the figure above, only five of Ireland’s 13 near-post crosses were successful, while four of their six far-post crosses met their mark.

It wasn’t until late in the match that Ireland eventually counteracted this with a higher cross to the far post, and they benefited immediately. 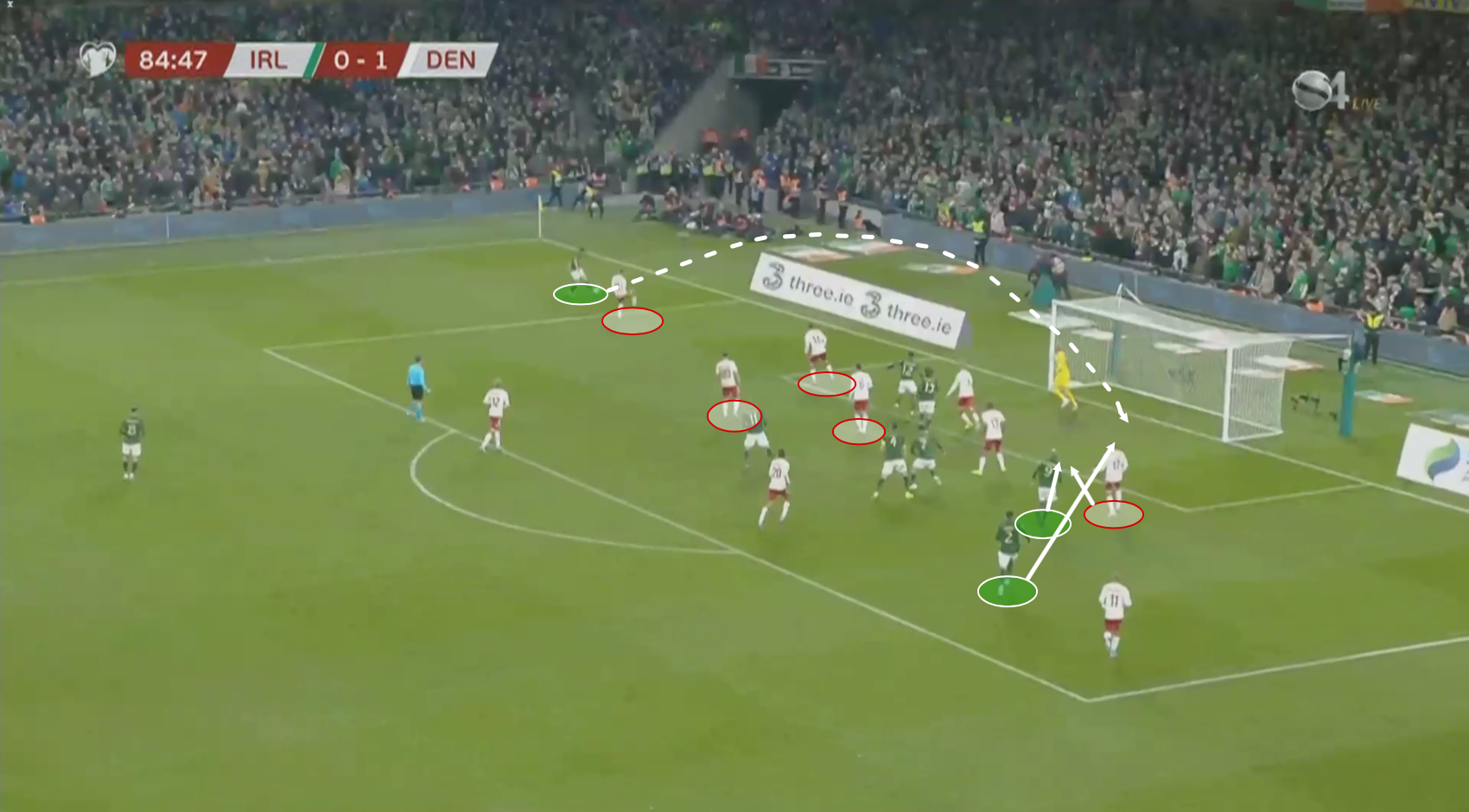 With Denmark overloading the ball-near side of the box, Ireland could outnumber their opponents on the far side. A two vs one advantage led to the equaliser, as Doherty headed in a long cross from Stevens.

Both Ireland and Denmark attacked more aggressively in the waning minutes, but ultimately the home side could not find another goal. Ireland may feel slightly unlucky as their xG was 0.7 compared to Denmark’s 0.37.

When it comes to tactics and in-depth analysis, this wasn’t the cleanest of matches. Both sides suffered in key areas; Ireland in finishing, and Denmark in defensive solidity and chance creation. Now, Ireland will have to navigate the treacherous Euro qualifying play-offs in March, first taking on Slovakia before meeting Bosnia and Herzegovina or Northern Ireland for a spot in the prestigious tournament. Denmark meanwhile continue on an outstanding 15-match unbeaten streak, and while they didn’t play their best this match, can look forward to continuing their upward trajectory.