EURO 2020: why the Netherlands were their own worst enemy in defeat to the Czech Republic – tactical analysis

The Euro 2020 round of 16 has delivered some excellent games so far, with Denmark comfortably defeating Wales, and Italy struggling to advance past Austria. However, arguably the biggest shock came in this game, with a resurgent Netherlands side facing a Czech Republic team with little pressure on them. This tactical analysis will look at how the Netherlands’ attack changed for the worse as the game progressed, as well as the Czech Republic’s wing play and second half tactics, looking to control the game and put pressure on their opponents after half-time. 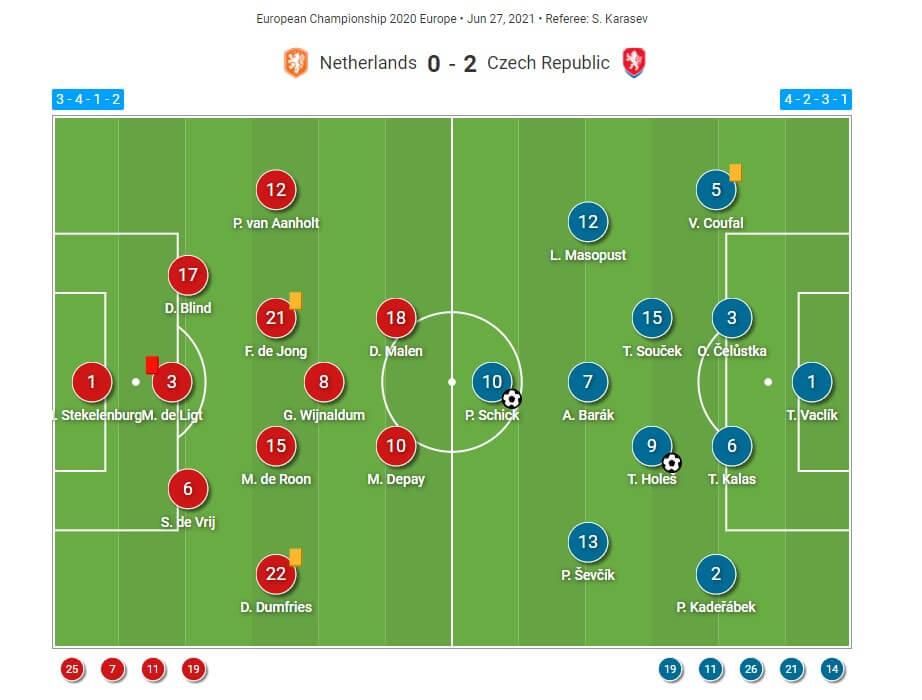 The Netherlands made just one change from their final group game win against North Macedonia, with Ryan Gravenberch being replaced by former Middlesbrough midfielder Marten de Roon, who partnered Barcelona’s Frenkie de Jong in the centre of the field. Wolfsburg striker Wout Weghorst was again on the bench, with Liverpool-linked Donyell Malen again playing alongside former Manchester United forward Memphis Depay in attack, whilst captain Georginio Wijnaldum once again started in the attacking midfield role behind them.

The Czech Republic made three changes of their own from the 1-0 defeat to England. Left-back Jan Boril was suspended for this game, so Hoffenheim’s Pavel Kaderabek came in to take his place. Captain Vladimir Darida and fellow midfielder Jakub Jankto moved to the bench, with Antonin Barak and Petr Sevcik replacing them. Striker Patrik Schick, who scored three times in the group stages, again led the line, whilst West Ham United right-back Vladimir Coufal and midfielder Tomas Soucek were also in the starting XI.

The Czech Republic’s main tactic in this game was to attack down the wings, and it was obvious from the start that this was where they felt they could play transitionally from defence to attack.

Here, the ball is in their own half, with the defence spread out across the pitch to cover as much ground as possible. This enables the full-backs to stay close to the sidelines, ensuring the Czech Republic control those channels, meaning they can transfer the ball to their teammates further up the field. The Netherlands played with a narrow structure throughout the game, preferring to dominate the central areas and not leave themselves spread out and exposed to through balls, and Malen, Depay and Wijnaldum have formed their usual triangle here to show that. However, when they had possession in these situations, the Czech Republic always had control of the game, with the Netherlands unable to close individual players down.

The issue for the Czech Republic was that they made too many mistakes in the first half, wasting good opportunities when in the final third. Here, winger Lukas Masopust is looking to find a teammate in the middle, but his cross is overhit and goes towards the other wing. He was not helped by the fact that barely any Czech players were looking to get behind the Dutch defensive line, so his options were limited.

It wasn’t just with crosses that they had problems. They also passed poorly at times too, with attacks breaking down too quickly and making it easy for the Netherlands to reclaim possession whenever they lost it. When finding the reasons why the Czech Republic didn’t score in the first half, not turning their good build-up play into chances is a big one.

In the second half, they persevered with their wing play, continually pushing their full-backs high up the pitch to put balls into the box. Here, we see right-back Coufal in possession, with the Dutch defence set up to try and make it hard for the Czech Republic to break through them centrally. However, what was increasingly evident in the second half was that the Czech players had more space in the opposing half to operate in, and were therefore able to increase the number of opportunities they had.

This section has looked at the main aspect of the Czech Republic’s attack; their wing play. One possible reason for them targeting this area was because of the Netherlands’ wing-backs, Denzel Dumfries and Patrick van Aanholt, who have constantly got into dangerous attacking positions throughout the tournament. Therefore, by pushing up the wings, it is possible that the Czech Republic were trying to nullify that threat, which would be understandable.

The Czech Republic’s second half improvements

We mentioned how the Czech Republic were finding more spaces to attack through in the second half, but they improved in all areas of their play, showing more intensity and quality.

Here, the Netherlands have a goal kick, but Maarten Stekelenburg’s options are limited. He can’t play a short pass out to the defenders, because three Czech players have closed them down, as the three boxes show. Therefore, he has to kick long, which is what the Czech Republic wanted him to do. Once the ball is in the air, they have a good chance of winning it and starting another attack, so, by pressing the defenders when out of possession, they were able to control the game and dictate how the Netherlands played. Normally, we expect teams to sit back and be compact when out of possession, but this demonstrates the newfound energy and confidence in the Czech performance after half-time.

We also mentioned how the Netherlands were leaving more spaces open in the second half, and this image demonstrates how the Czech Republic took advantage of that. Soucek has the ball here, and could pass into a teammate on the edge of the box. However, he decides to shoot at goal instead, seeing the gap ahead of him (indicated by the red line) and looking to punish the Dutch defenders for leaving it open. Whilst his shot is saved by Stekelenburg, this again indicates the Czech players’ confidence, looking to go forward when they had the ball and trying to make things happen.

Two game-changing things had happened by this stage; Juventus defender Matthijs de Ligt had been sent off, and Tomas Holes had opened the scoring. Both of these led to the Czech Republic increasing the pressure on their opponents, and they played with a more free-flowing style of football after the break as a result.

Defensively, they were strong when needed too. The Netherlands didn’t have any shots at goal in the second half, which was partly down to their poor quality in possession, but also down to the Czech defenders winning the ball every time it came near their box. Here, there are three Czech players positioned close to each other, making it difficult for the Dutch attackers to run behind them. This was a common feature of the second half, and again showed just how much improvement they made. Therefore, we can see the reasons why they were the better side in the second half, both in attack and defence.

We have focused mainly on the Czech Republic in this analysis, looking at where they went wrong in the first half and how they improved in the second. However, the Netherlands’ poor attacking play in the second half also contributed to their eventual loss.

The common theme in the Netherlands’ final third play was options, as they always had players available whenever they had the ball. Here, both Malen and Depay have moved out to the right wing, which would ordinarily leave the central spaces open and unoccupied. However, Wijnaldum has moved into that area, giving the two forwards a passing option if they want to transfer the ball back into that channel. This also forces the Czech defence to remain spread out, rather than all of them surrounding the ball, making it easier for the Netherlands to attack down the wing and find the right pass into the box.

When Dumfries and van Aanholt were able to get up the field, they also helped to create options. Here, the Czech Republic have five players back, trying to stop the Dutch attackers breaking through them. However, because the full-backs are present here, on either side of the main forward line, it allows the rest of the Netherlands players to drift inside, playing more centrally, which increased the number of players they had in attack. Therefore, they have options in different areas of the pitch, giving them a better chance of maintaining control of this situation, especially as the Czech players are unable to cover every available option and not leave spaces open in the process.

The Netherlands had a good hold on the game in the first half, always getting players ahead of the ball to help create and convert goalscoring opportunities.

If we now look at their performance in the second half, we can see the stark contrast in their performance. Manager Frank de Boer had withdrawn Malen shortly after the red card for de Ligt, bringing on Quincy Promes instead, but Promes was seemingly tasked with helping out defensively, plugging the gap, and not helping Depay in attack. That left the new Barcelona forward on his own, and this image shows how that made it easier for the Czech Republic to play around him.

As much as the Netherlands controlled the first half, the Czech Republic saw more of the ball in the second half, constantly moving it around the pitch and trying to create opportunities. As the Dutch were leaving spaces open, generally lacking organisation, there were more gaps for the Czechs to play forwards through, so it is clear from this that the Netherlands’ response to the red card of sitting back did not help them, especially after Holes had scored the opening goal of the game.

Once Weghorst came on for de Roon, the Netherlands reverted back to playing with a front two. However, their problem then was poor quality with the ball, as Depay here turns and overhits his pass, meaning that, from a good attacking situation, the Czech Republic win a throw-in and can attack forwards again. This lack of composure was another reason for the Netherlands not getting back into the game, even when they had started to play a more attacking style of football again.

From this section, we can see how the Netherlands’ tactical alterations did not help them, and their changes to try and make it harder for the Czech players to get near their goal also didn’t work. This is something there will no doubt be questions asked about in the coming days, as their tournament performance is analysed in great detail.

In conclusion, this tactical analysis has shown how the Netherlands and Czech Republic dominated the game at different times. However, it was the Czechs who got the win, and this was down to a few key reasons, such as their improved second half positivity, and the Dutch players’ poor play after half-time, as they never looked like scoring after conceding the first goal. Their group stage results would have given them confidence of advancing far into the knockout stages, but this result brings them back down to earth, as their mistakes were continually punished by a Czech team who now go into their quarter-final tie against Denmark knowing that they have nothing to lose.