On Saturday evening, the Baku Olympic Stadium in Azerbaijan hosted the third semi-final of Euro 2020. The game was disputed between the Czech Republic and Denmark with the Danes coming out as narrow winners in a 2-1 victory.

The match was quite evenly contested for the most part and Denmark managed to hold on in the second half to their lead. Unfortunately for the Czech Republic, their tournament has come to an end but Jaroslav Šilhavý and his men can be proud of getting it thus far.

Denmark will now play England in the semi-final, which is a mouth-watering tie on paper, following the Three Lions’ emphatic win over Andriy Shevchenko’s Ukraine in Rome. This will be a very difficult game for Kasper Hjulmand’s side but given their brilliant tactical display against the Czechs, fans will be very encouraged that they can go all the way and complete an incredible fairy-tale story. 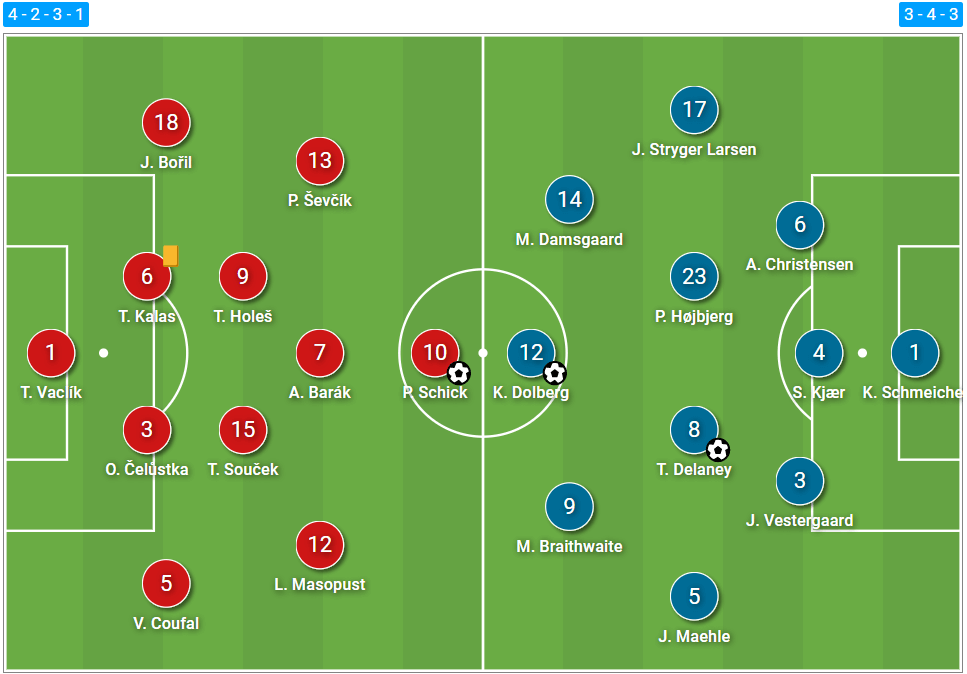 There was just one change across both sides, and it came from the Czech Republic. Jan Bořil came in at left-back in place of Pavel Kadeřábek and played in a back four with Tomáš Kalas, Ondřej Čelůstka, and Vladimír Coufal with Tomáš Vaclík in goal.

Šilhavý maintained the 4-2-3-1 that his side is so used to playing with and the remainder of the side was exactly the same. Tomáš Souček and Tomáš Holeš started as the double-pivot and have been formidable together throughout the tournament.

Antonín Barák was the number 10 for the Czech Republic, flanked by Lukáš Masopust on the right and Petr Ševčík on the left. The in-form and in-demand Patrik Schick started as the sole striker.

For Denmark, Hjulmand named a completely unchanged team to the one that thrashed Wales 4-0 in the Netherlands the Saturday prior and the 3-4-3 remained their system of choice although the manager did use a 4-3-3 too against the Welsh.

Kasper Schmeichel started in net, protecting the goal behind a back three comprising of Jannick Vestergaard, Simon Kjaer, and Chelsea‘s Andreas Christensen. Joakim Mæhle and Jens Stryger Larsen were deployed as the wingbacks and flanked a double-pivot of Thomas Delaney and Pierre-Emile Højbjerg.

Barcelona forward Martin Braithwaite and Sampdoria’s Mikkel Damsgaard were utilised by Hjulmand out wide and supported the lone striker and hero from the previous round, Kasper Dolberg.

Denmark set up in a 3-4-3 and their shape remained as this when they were in the first third of the pitch and looking to build their way through the thirds.

In this shape, they maintained a lot of depth with the three forwards constantly making runs in behind the Czech defence in order to stretch the backline vertically and the wingbacks hugged the touchline which stretched them horizontally. 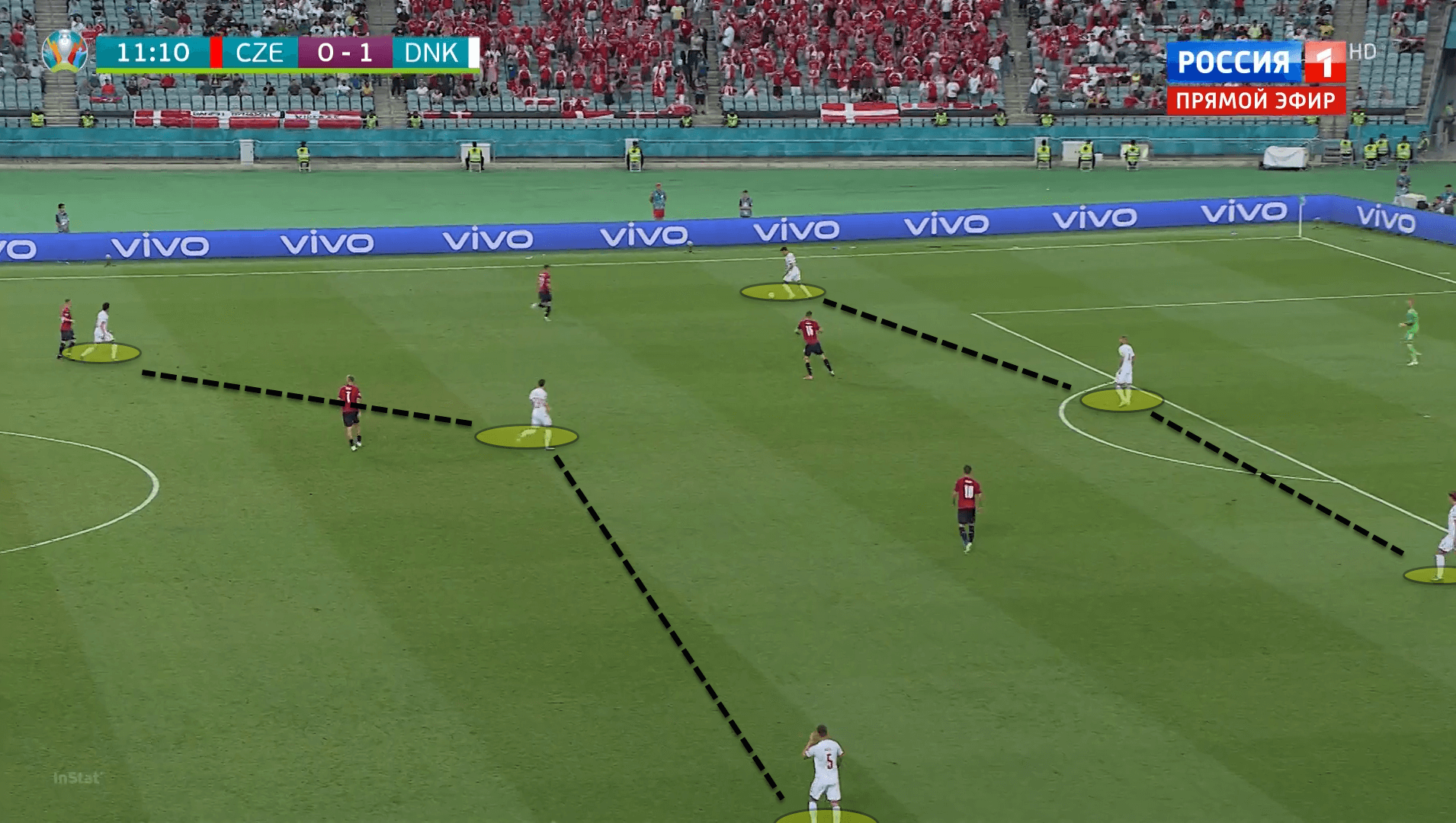 This intense stretching of the Czech Republic’s high block meant there was a lot of space between the Czech backline and midfield line for Denmark to play directly into when they were struggling to play out from the back, which happened more often than not, particularly in the first half. 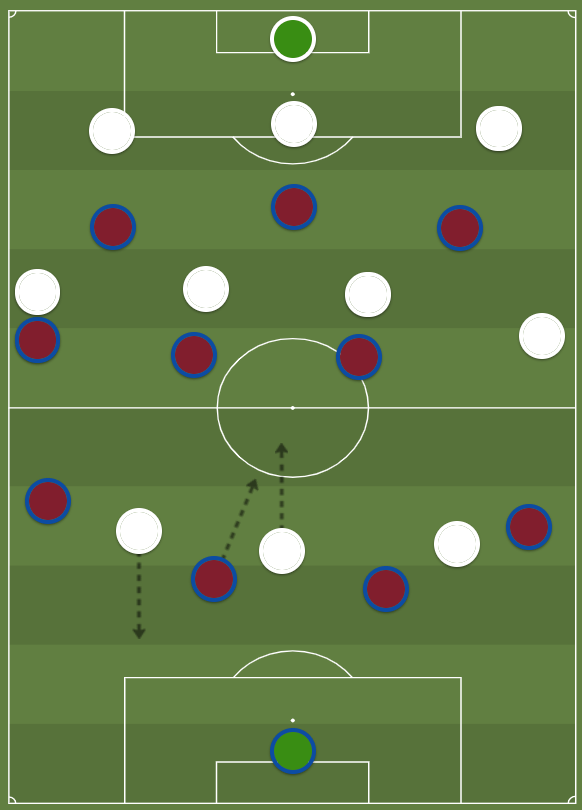 With countermovements from the forward line, as seen in the visual above, Denmark could progress the ball further up the pitch quickly and receive it between the lines, dragging players out of position in the process and leaving space to be exploited.

This set-up in possession also made coordinated pressing with Czech Republic’s backline and midfield very difficult as the backline were pinned back by the three Danish forwards and so were unable to support the double-pivot when they were forced to press high.

However, the Czech Republic still executed a solid press with their midfield and forward line against Denmark’s backline and midfield when the Danes were in the build-up phase of their attacks.

The Czech Republic deployed a man-oriented high press and it worked quite well, one of the main reasons Denmark were forced to play long quite a lot over the press as they were unable to play through. 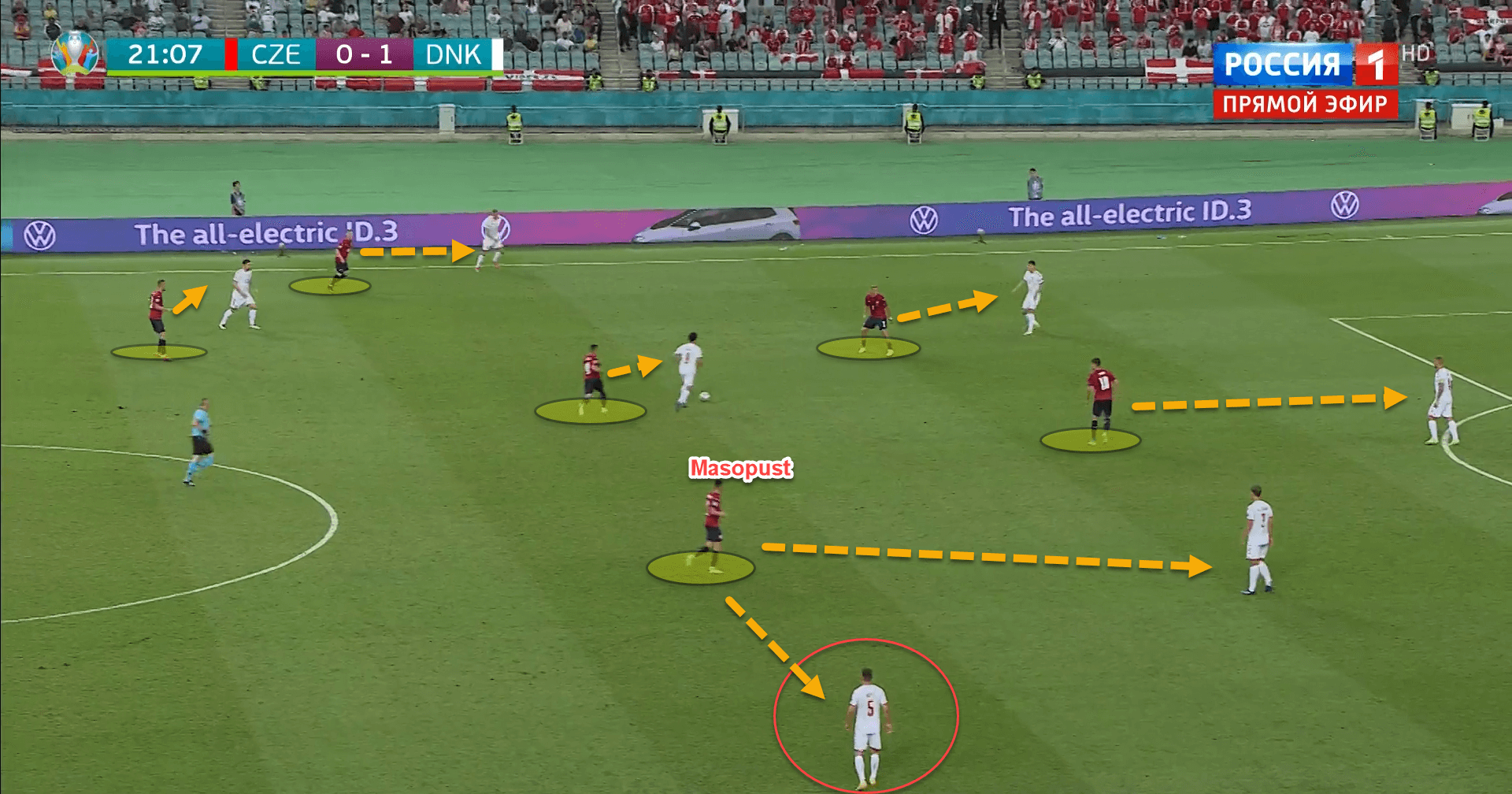 Here, the Czech Republic’s man-oriented high press against Denmark’s backline and midfield can be seen. It was a very tight man-marking scheme and the Danes struggled to get any room in possession to turn or play forward.

Masopust was tasked with the most important role in this high press by his manager. The Czechs would force Denmark to play over to the left side of the pitch (Denmark’s right side) and Masopust would push inside to press Vestergaard, which would leave Mæhle free on the opposite side of the pitch for a switch of play.

Masopust’s role was crucial because as soon as the ball was switched to Mæhle, the winger was forced to leave his man and quickly shift over to the Danish wingback and try and intercept the pass. 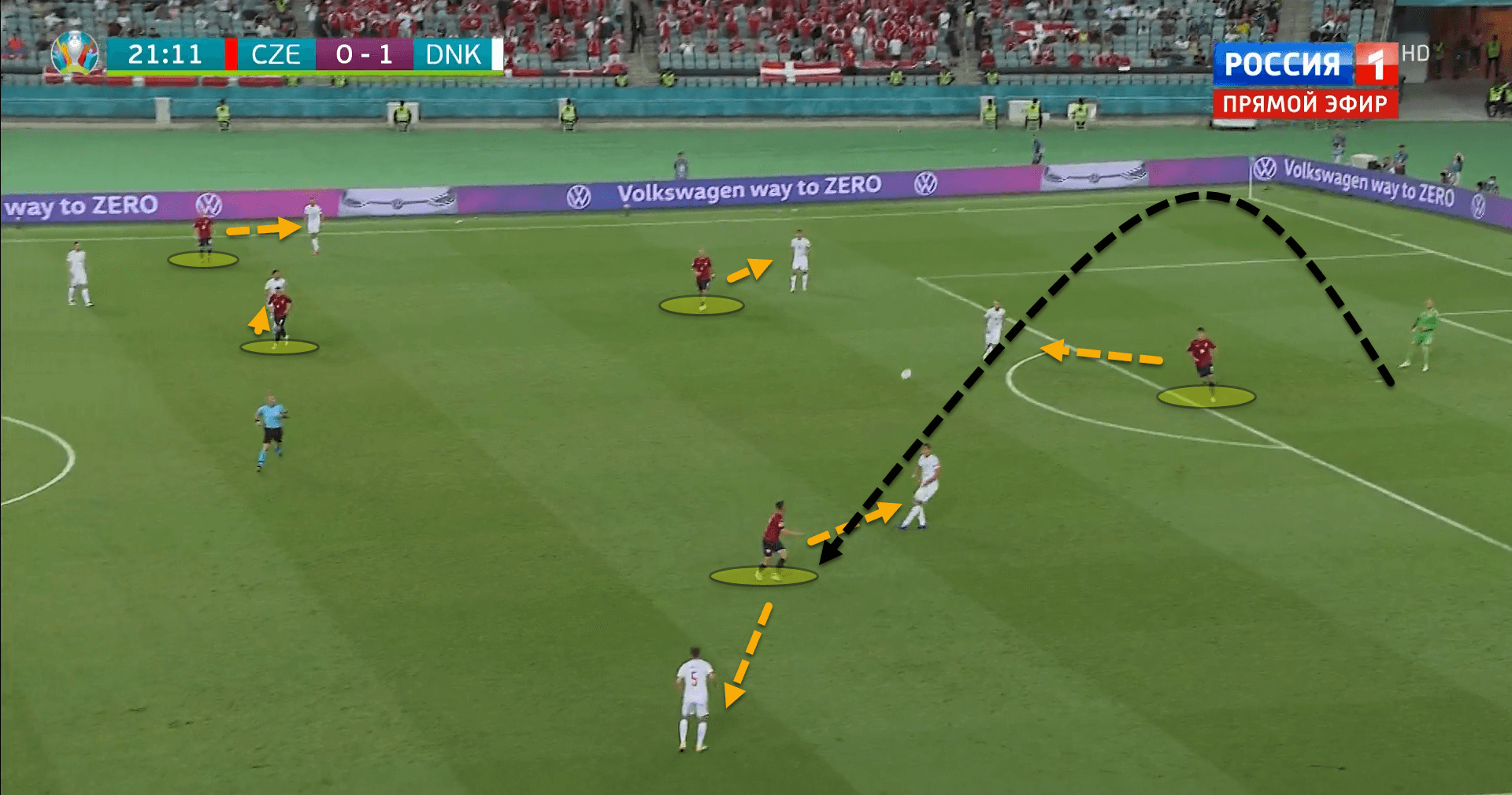 In this instance, Denmark were really struggling to play out from the Czech Republic’s high press and so Schmeichel quickly switched the ball out to Mæhle. Masopust read the switch instantly, stopped man-marking Vestergaard and began to move out towards Mæhle. The winger intercepted the pass and the Czech Republic nearly scored from the attacking transition which that this resulted in.

Although Denmark went 2-0 up, it never looked as though they were in control of the game at all in the first half. The Czech Republic had a number of great chances in the opening 45 minutes but failed to convert.

Šilhavý’s side found it quite easy to break through Denmark’s high press as they would constantly create central overloads. Wales and Belgium did the exact same thing in their games against Denmark and yet Hjulmand persists with the 3-4-3 high press.

The Czech Republic, whilst they had established possession in a positional attack and were trying to break the Danish first line of pressure, used a back three.

Against Denmark’s front three press, this matched up perfectly. However, when Šilhavý’s men managed to break through the first line of pressure, it caused Denmark quite a lot of problems numerically. 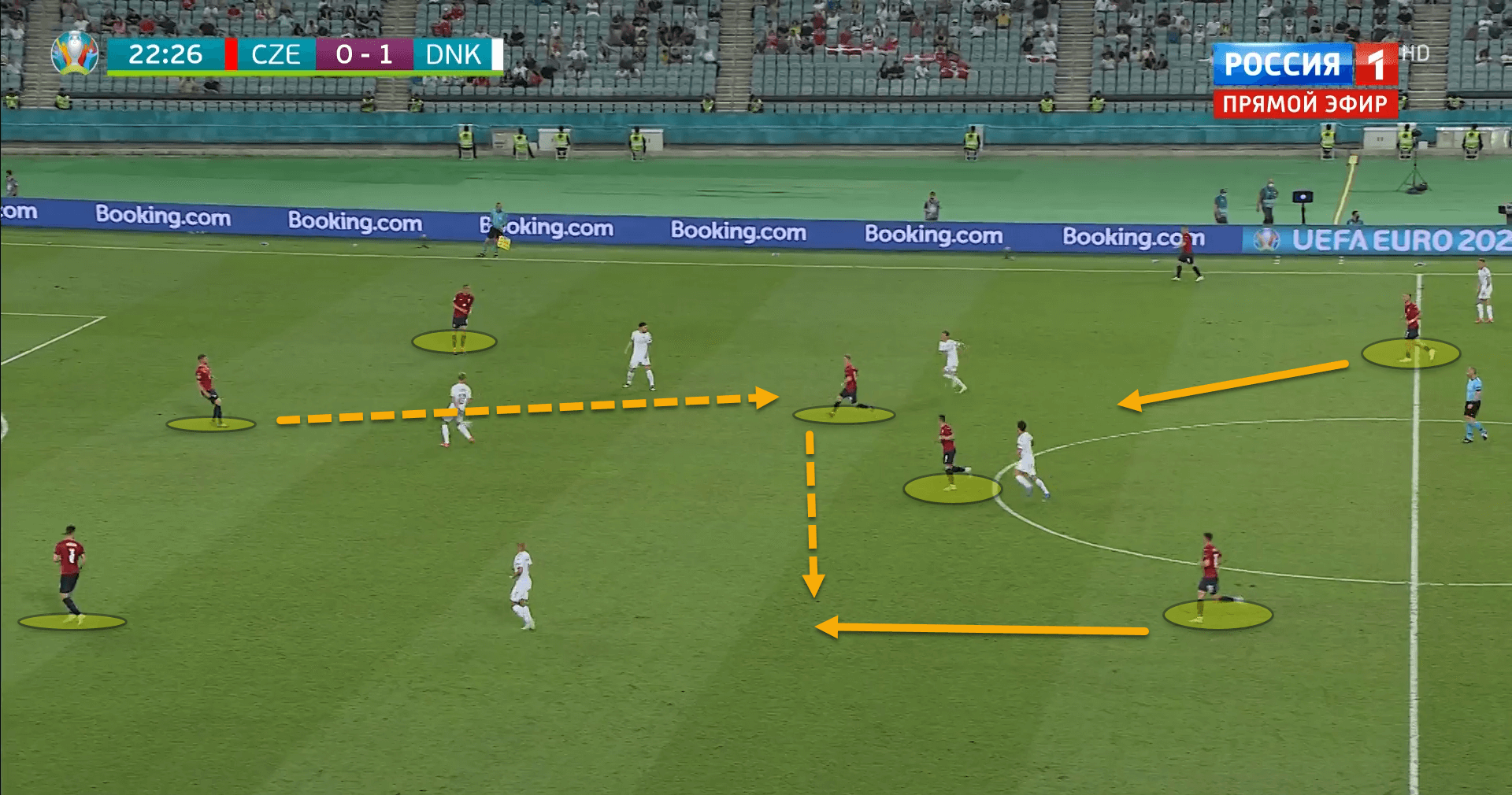 Here, the Czech central defender has broken the Danish first line and played the ball into the feet of one of the Czech pivot players. The issue here is that Denmark’s second line is outnumbered 4v2 in the middle of the pitch making progression past this line of their high block very easy.

Even further up the pitch, Czech Republic would overload the midfield double-pivot of Denmark which would allow for easy ball progression. The Danish centre-backs were forced to be aggressive and push out of the backline to help the midfield duo out when Denmark were sitting in a deeper block.

The Danish centre-backs did this quite well, helping out the midfield when it was clearly being overrun, but it did leave space behind them to be exploited. In fact, the central defenders doing this led to a fantastic chance late on in the second half for Denmark when Vestergaard aggressively closed down Masopust and the Danes capitalised from how many Czech bodies were piled forward with a quick transition into Damsgaard. 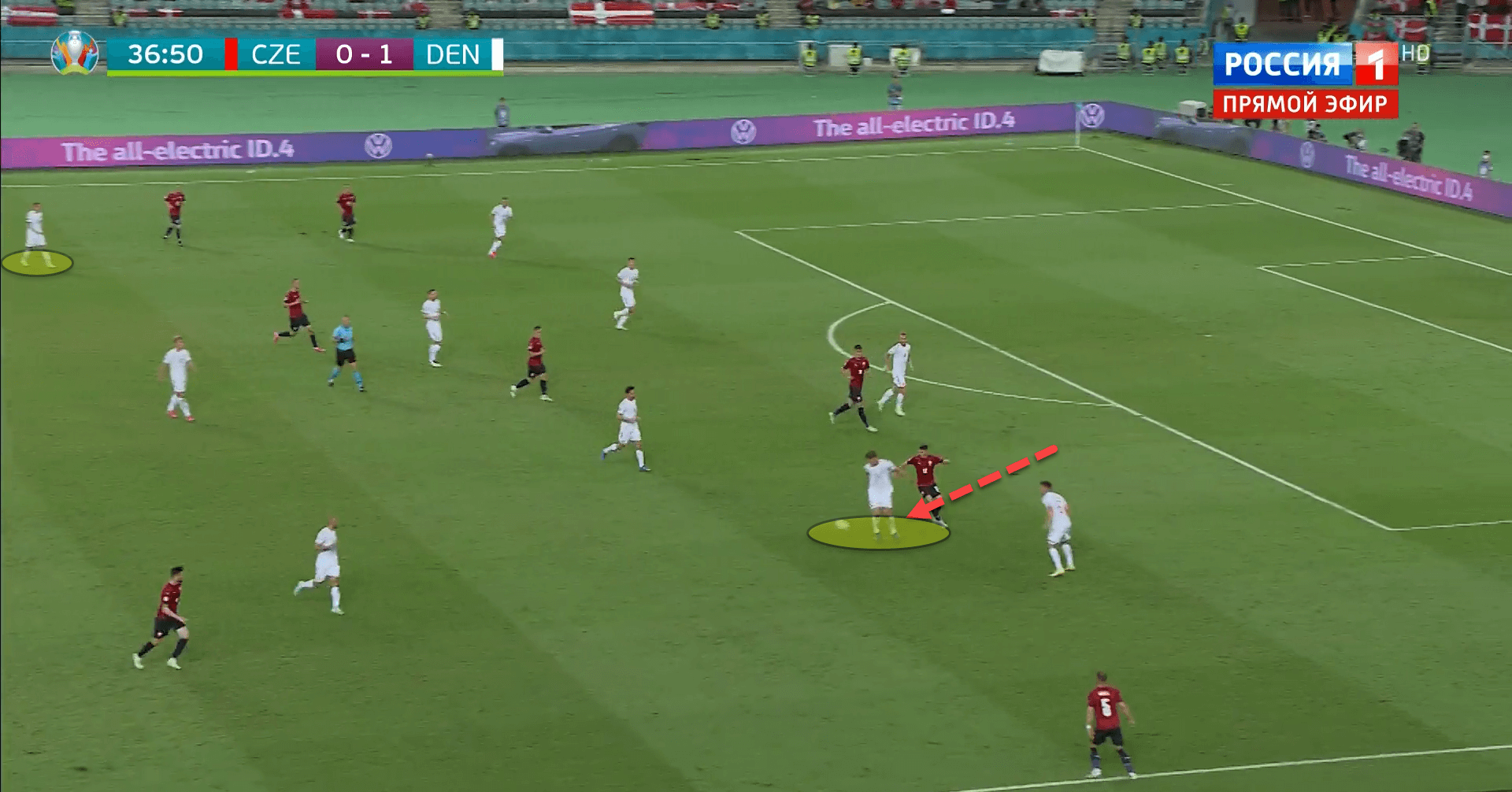 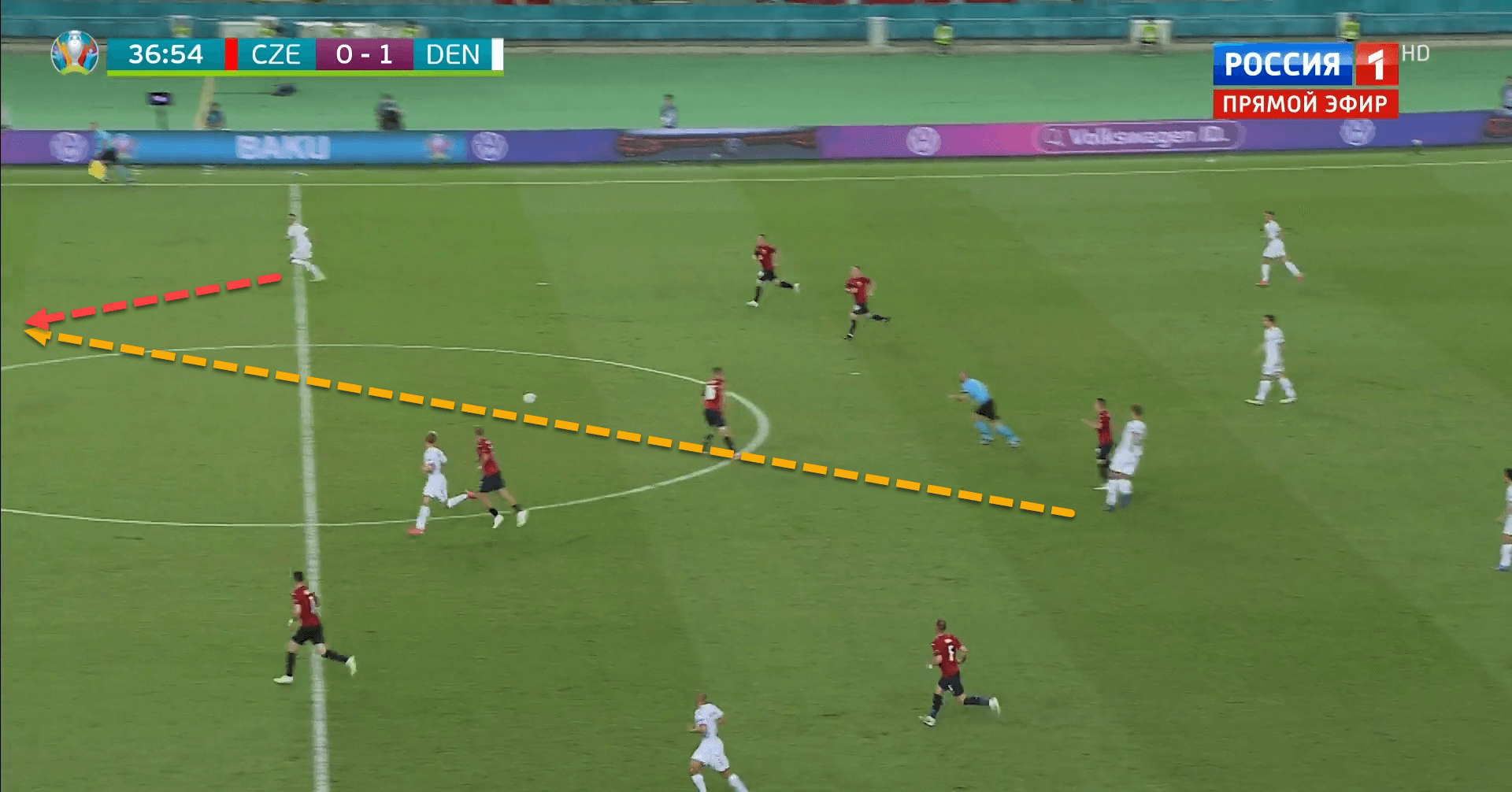 The Czech Republic did manage to get themselves back into the game after an exceptional early ball from Coufal found Schick in space inside the area. The Czech Republic were trying this move as their primary source of final third play throughout the game. 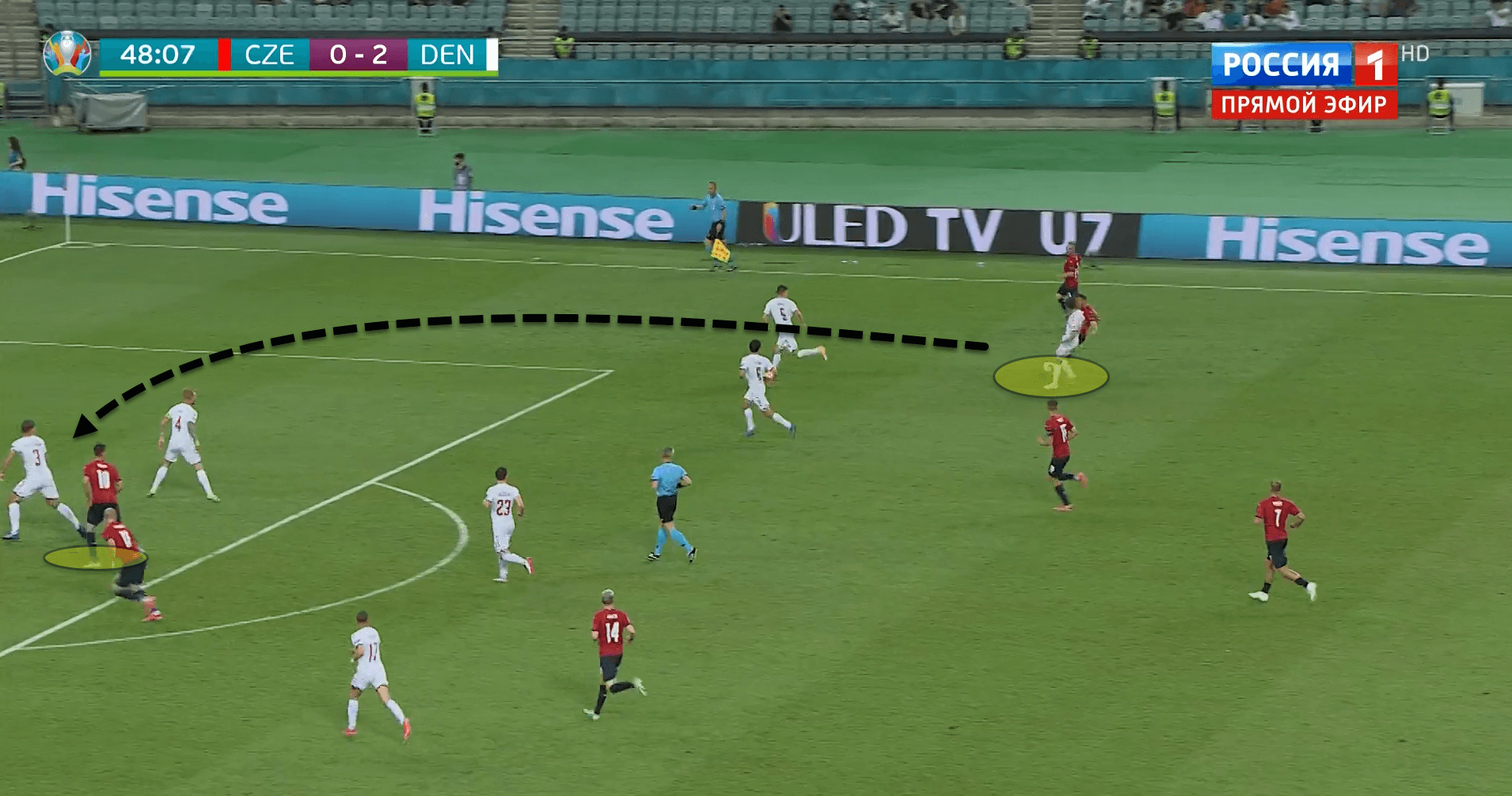 Although Denmark were still winning, Hjulmand knew that something needed to be fixed with how his side were setting up in the defensive phases.

As stated already, the same issue of being numerically overloaded centrally arose again as it had done against Belgium and Wales. In the 2-1 defeat to the Belgians, Hjulmand was far too late with the change but against Wales, he switched up the system by just the 13th minute of the game.

In this quarter-final, the switch was exactly the same against the 4-0 trouncing of the Welsh. Hjulmand changed the formation from a 3-4-3 to a 4-3-3 and put Christensen into the middle of the park, playing zonally.

Delaney and Højbjerg remained in the middle but having Christensen behind them allowed them to have a player who would zonally mark any players that dropped between the lines, which made central progression extremely difficult for the Czechs. 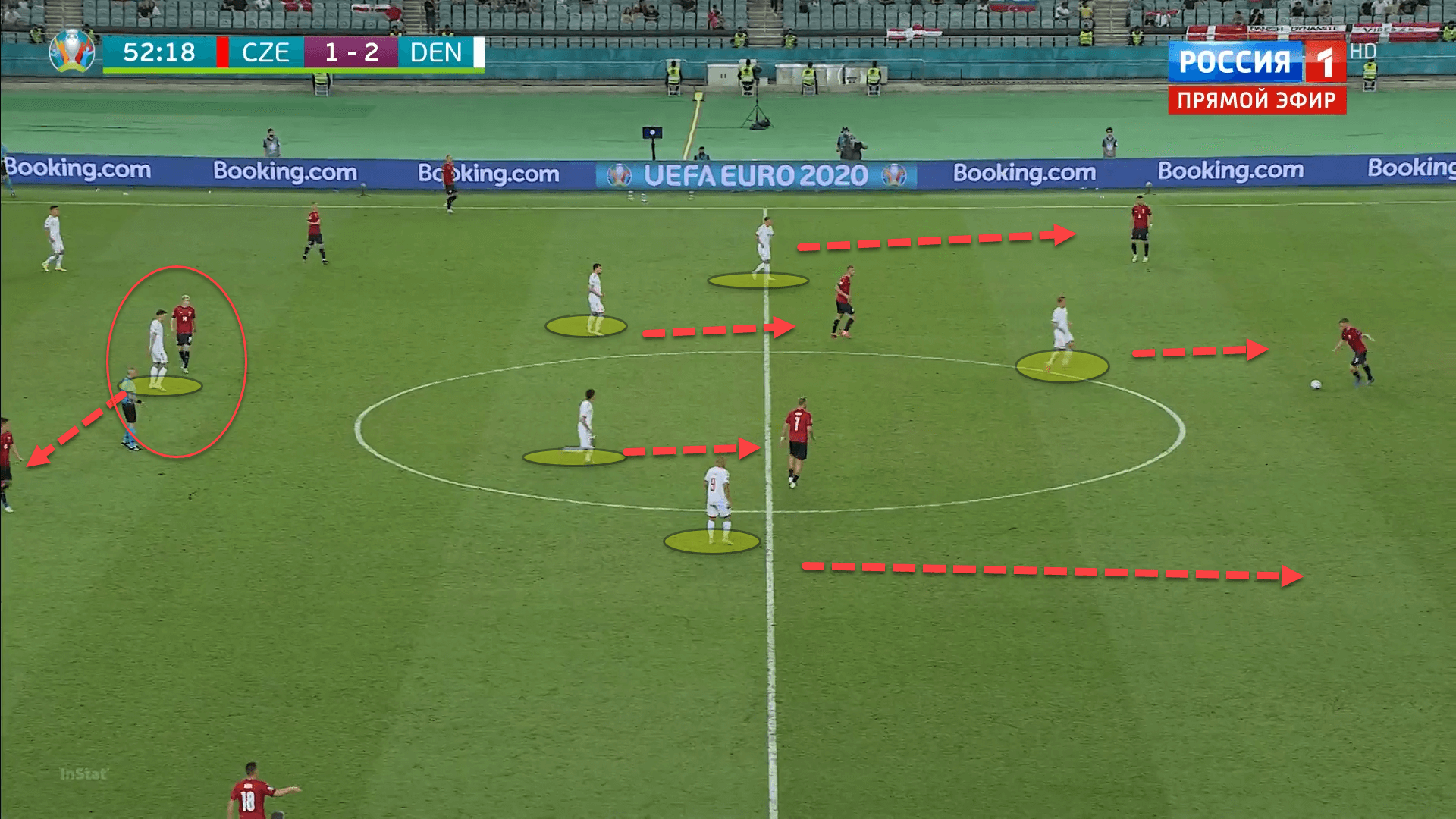 This image shows how effective the change from the manager was in nullifying Czech Republic’s ability to play behind Delaney and Højbjerg. The two midfielders can focus on defending against the Czech double-pivot whilst the Chelsea centre-back picked up any players dropping between the lines.

Eventually, Brentford midfielder Christian Nørgaard came on for Damsgaard for the final 30 minutes of the game and Denmark’s shape shifted once more. Christensen dropped back into the backline and Hjulmand switched the formation from a 4-3-3 to a 5-3-2 for the remainder of the game as Denmark just needed to hold onto their lead. 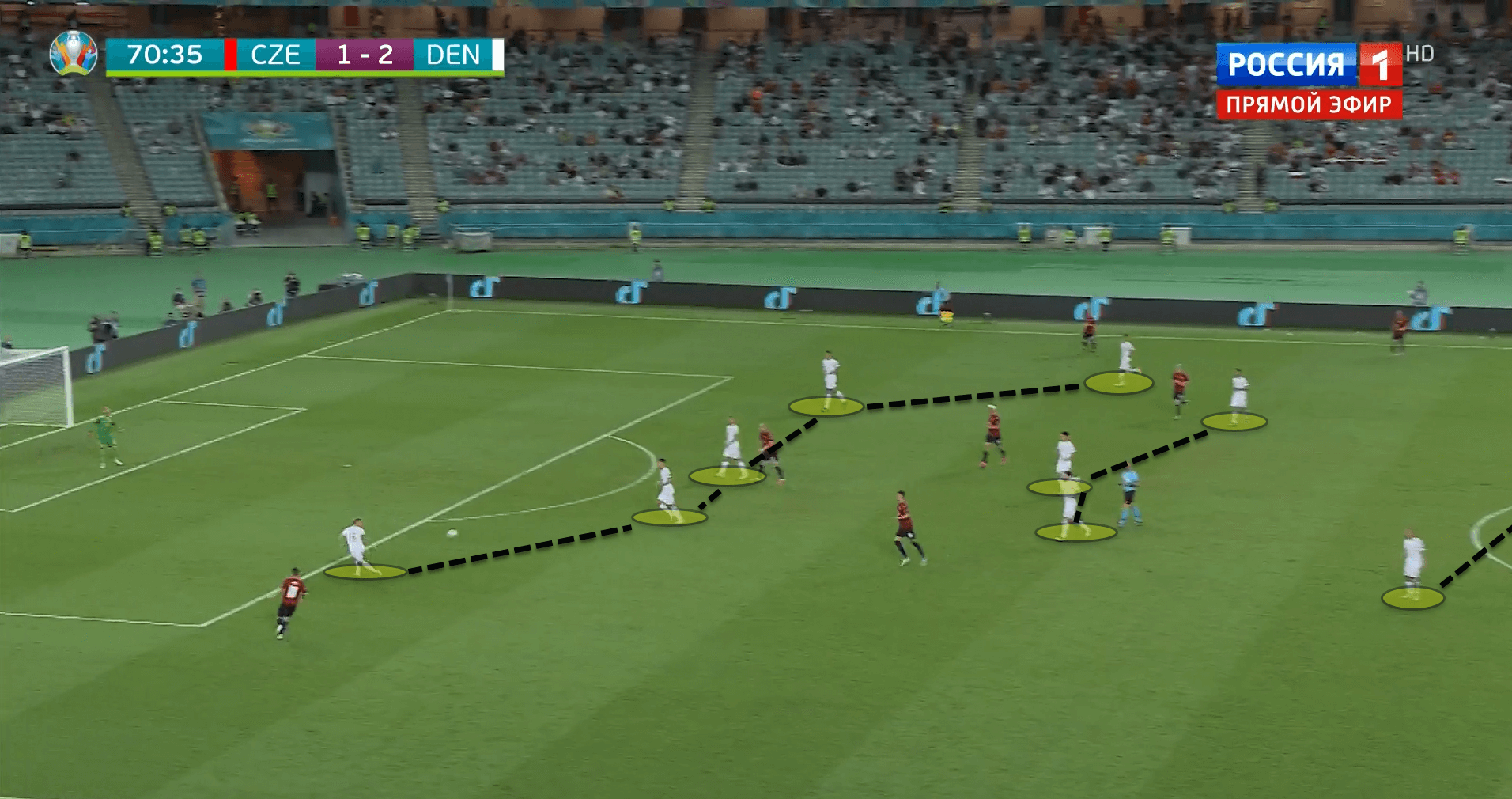 The Czech Republic found this shape-shift even harder to break down and ultimately couldn’t. Denmark were more than happy to allow their opponents to have possession and the Czechs mustered 53 percent of the ball possession over the ninety minutes compared to the Danes’ 47 percent.

The Czech Republic were left to try their hand at half-chances for the remainder of the game and, despite their best efforts, the victory went to Denmark.

Tactically this game was very interesting and leaves a lot to be worried about when looking at how Denmark will set up for their semi-final bout with England. Hjulmand did fix the issue once more, as he had done already against Wales, but one does wonder why he persists with the 3-4-3.

Perhaps the manager believes the formation’s benefits in possession and in transition far outweigh its liability out of possession. One would feel that Denmark will be looking to shift their formation to more of a 5-3-2 against England as opposed to the 3-4-3/5-2-3 but we will have to wait and see.

For the Czech Republic, they gave it their all and Šilhavý set his team up strong tactically for this match. Their inability to control the counterattack and stop crosses coming into the box ultimately lost them the game but the Czechs can certainly be proud of their efforts throughout the tournament. 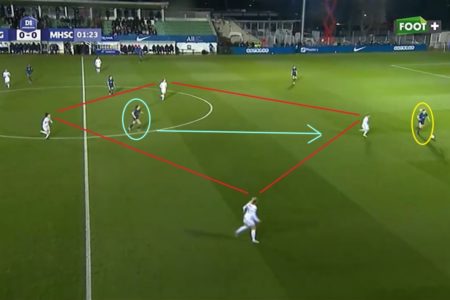 “An absolute powerhouse”: Why “understated” PSG midfielder Sara Däbritz could be on the move this summer – scout report

As with most of the leagues around Europe, the 2021/2022 Division 1 Féminine season is rapidly drawing to a close, […] 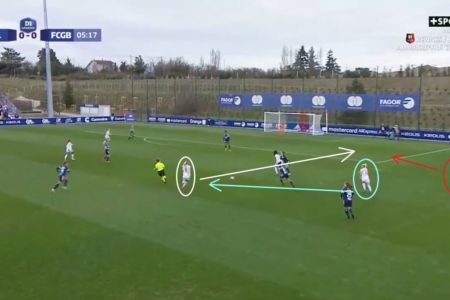 With the majority of leagues wrapped up for the summer, attention has now turned to the upcoming summer transfer window, […]