Arsenal’s Carabao Cup campaign ended early yet again. This time, at the hands of Tottenham Hotspur. Unlike their 4-2 victory over Tottenham a few weeks ago, Arsenal were outplayed. Over the 90 minutes, Tottenham proved more intelligent which showed in the 2-0 scoreline.

Arsenal went into the game with a depleted defence. Granit Xhaka continued at centre back and Ainsley Maitland-Niles came in at right back. This was originally a back four as seen in the lineup graphic below: 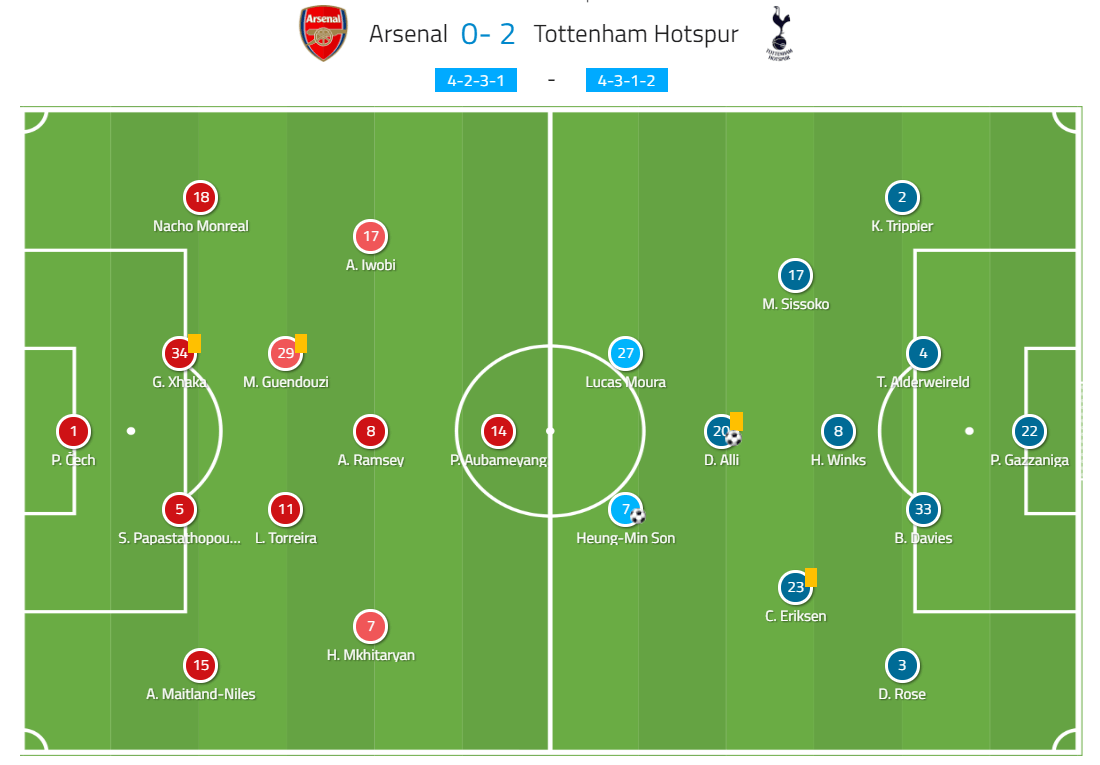 Tottenham came into the game with a very strong team with Harry Kane being the biggest miss. However, this played into their hands. Without a natural striker, their front three was able to pick up incredibly dangerous positions throughout the match.

Not only were they a handful for the Arsenal defence, but the Arsenal midfield also. This could be seen in the pace at which their goals were scored.

Both Tottenham goals came from long balls from their goalkeeper. With this, we can see that in these situations, Arsenal weren’t ready and didn’t know how to handle Tottenham’s attack. Furthermore, with midfielders and wingers occupying central areas, their speed, agility and movement off the ball made them harder to pick up.

However, the makeshift defence are caught ball-watching and are rightfully punished.

That space in front, in between and behind the defence was also the direct cause of the second goal. However, what makes the second one more alarming is that Arsenal had changed to a three-man defence at half-time with Laurent Koscielny replacing Henrikh Mkhitaryan.

The space he receives the ball in is massive and dominated by Tottenham attackers. The fact that no one follows him in isn’t the only shocking moment but also the distance between Sokratis and Koscielny. Obviously preoccupied with Heung-Min Son, Sokratis feels he has to cover him. But if he keeps a similar distance to Koscielny as Xhaka, he can help change the situation the defence is in.

Despite, falling off as the game grew on, Arsenal started well. They created chances well and were on the front foot for a while. What helped them do this was playing in central areas. Although starting in a 4-2-3-1, Mkhitaryan and Alex Iwobi aren’t the best wide players.

Also, considering they were up against Kieran Trippier and Danny Rose, would’ve been hard to see them beat them one-on-one. Therefore, Arsenal’s best chances came through the middle as seen below.

Unfortunately for Arsenal, Mkhitaryan couldn’t finish when one-one-one with the goalkeeper. However, this showed that on the night, Arsenal could create. When Mkhitaryan and Iwobi came into central areas, this forced Tottenham to concentrate more, creating spaces for onrushing players like Ramsey.

This led to a barrage of Arsenal chances late in the first-half but they couldn’t convert.

Chasing the game, Unai Emery made yet another half-time change. Bringing on Koscielny and losing Mkhitryan in midfield. However, this proved to be the wrong change. In the second-half, Arsenal’s attacks were much more lacklustre than in the first-half. This was because, with fewer people in midfield, Arsenal allowed Tottenham to dictate their play as seen below:

One of the big questions an hour before kick-off was: ‘Where is Mesut Ozil?’. The answer that was given was that he was left out for tactical reasons. However, following Arsenal’s 2nd loss to Tottenham at the Emirates, it’s clear that his absence had an effect. Had he been available for selection, its very unlikely that Koscielny would’ve come on at half-time, and ultimately, that decision hindered Arsenal going forward for the rest of the match.

However, not every call Emery will make will be right and this will be a learning experience. With that being said, it is clear for all to see that without Ozil and Alexandre Lacazette in the side, Arsenal are much weaker creatively. We’ll see if that changes on Saturday against Burnley.