Chelsea came into this matchup against Barnsley in the EFL Cup as heavy favourites given that the Blues are fighting for a place in the Champions League whilst Barnsley were fighting to stay in the Championship last season. The stark contrast in quality was on full display as Frank Lampard’s men romped to an easy 6-0 win with club-record signing Kai Havertz scoring a hattrick and Tammy Abraham getting a goal along with three assists. Ross Barkley and substitute Olivier Giroud also got on the scoresheet to hand Gerhard Struber’s team a massive defeat.

This tactical analysis will examine the tactics used by both Chelsea and Barnsley in this EFL Cup match. The analysis will highlight the fortunes of both teams’ pressing as well as how Barnsley could have exploited Chelsea’s double pivot. 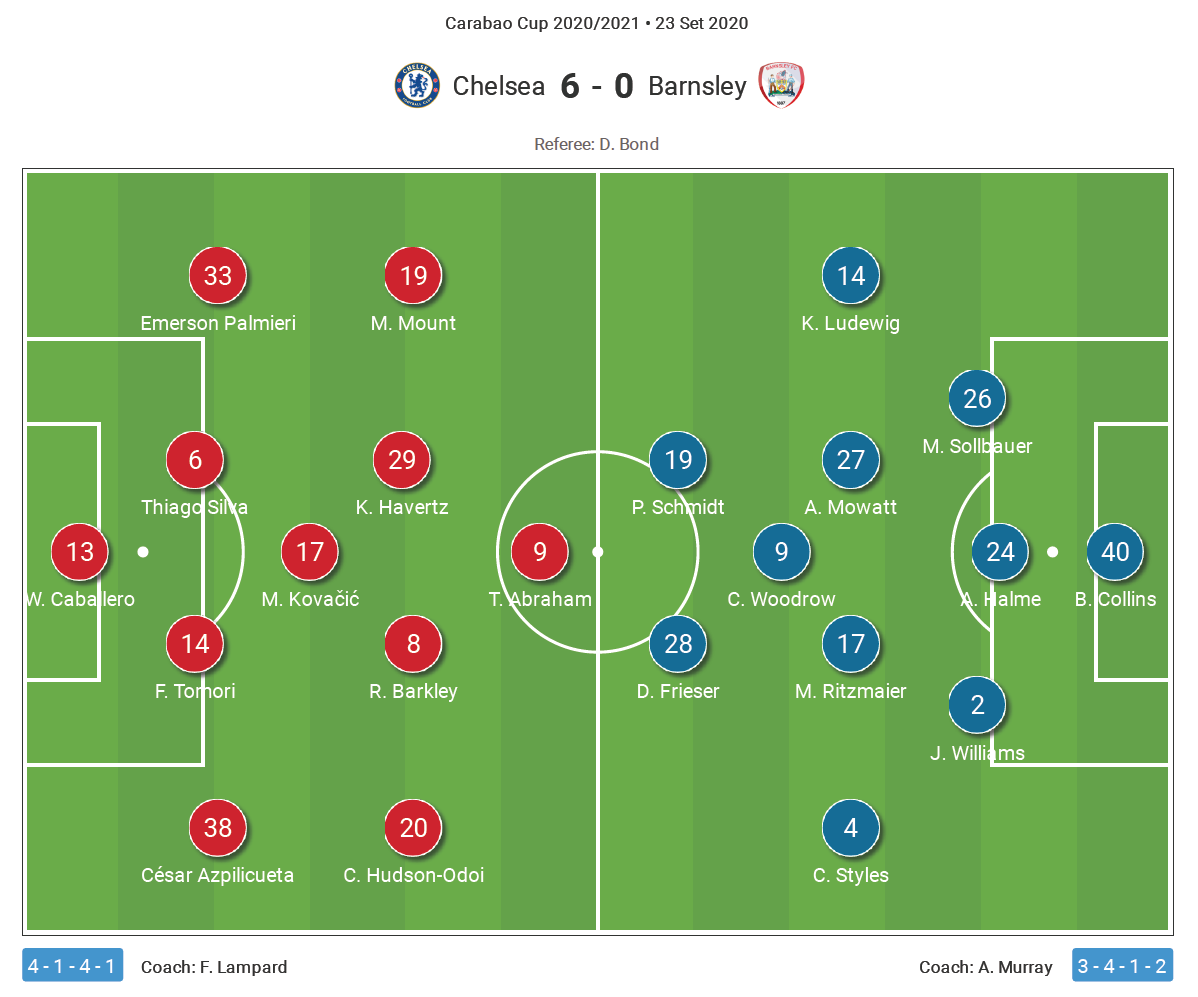 Chelsea lined up in a 4-1-4-1 formation that they often use. Willy Caballero starts in goal with a back four of Emerson, debutant Thiago Silva, Fikayo Tomori and captain César Azpilicueta. Lampard opted for a single pivot of Mateo Kovačić, that became a double pivot in-game, with Ross Barkley, Mason Mount, Kai Havertz and Callum Hudson-Odoi in front of them as the attacking midfielders. Tammy Abraham started as a lone striker.

Barnsley began in a 3-4-1-2 formation that they have featured quite often this season. Ex-Chelsea keeper Brad Collins started in goal with a back three consisting of Jordan Williams, Aapo Halme and Michael Sollbauer. Kilian Ludewig and Callum Styles were the wing-backs with Marcel Ritzmaier and Alex Mowatt making up the midfield pairing. The front two for Struber’s side consisted of Dominik Frieser and Patrick Schmidt with just behind as the attacking midfielder Cauley Woodrow.

With Chelsea being near the top of the Premier League, the gulf in technical quality compared to most teams will be quite big especially if that team is near the bottom half of the Championship. Barnsley, like most teams, employed a version of the press that was high up the pitch and intense. It worked some of the time, mostly in the first half, as they were able to stop Kovačić getting on the ball when building out from the back. This example below from early in the match showcases good pressing from Barnsley. 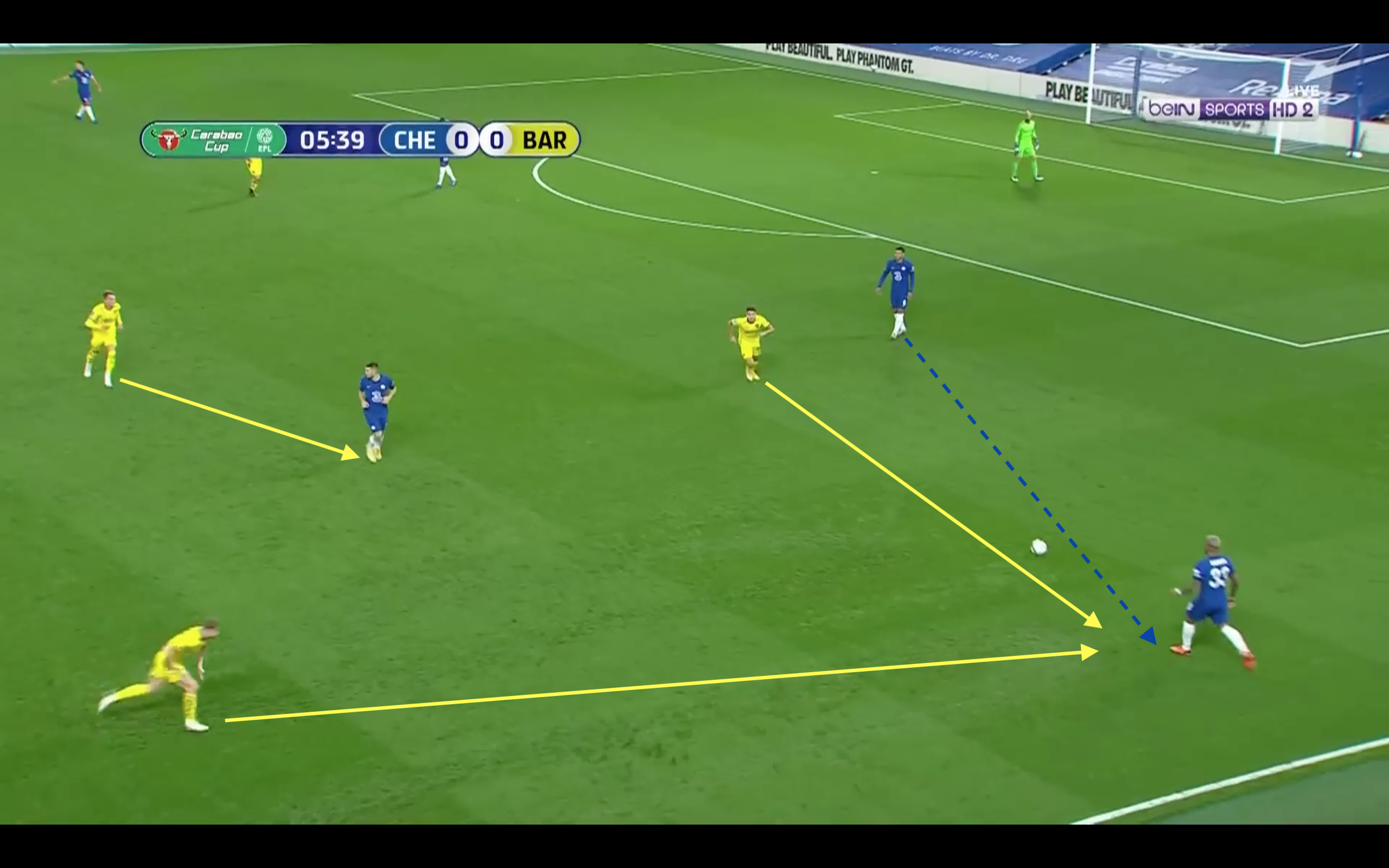 Thiago Silva played the pass into Emerson but when the centre-back had the ball, the Barnsley forward forced that pass to the left-back. The reason for this was that Emerson was the pressing trigger more often than not. As soon as the pass is played to the left-back, Barnsley’s right-back flies in to put pressure on Emerson. The striker who pressed Thiago Silva is also looking to close in and will look to keep Silva in his cover shadow to prevent a pass back to him. With Kovačić looking to drop for a passing option, one of the attacking tridents is closing in on the Croatian to make that pass a very risky one. In the end, with two players closing in on Emerson, the Brazilian looks to send it long but the ball ends up going out of play.

However, as the game got on, the press seemed to be disjointed a lot of the time and Chelsea grew in confidence. They were able to get into the opposition’s half in just two passes and were able to get at the defence with ease. 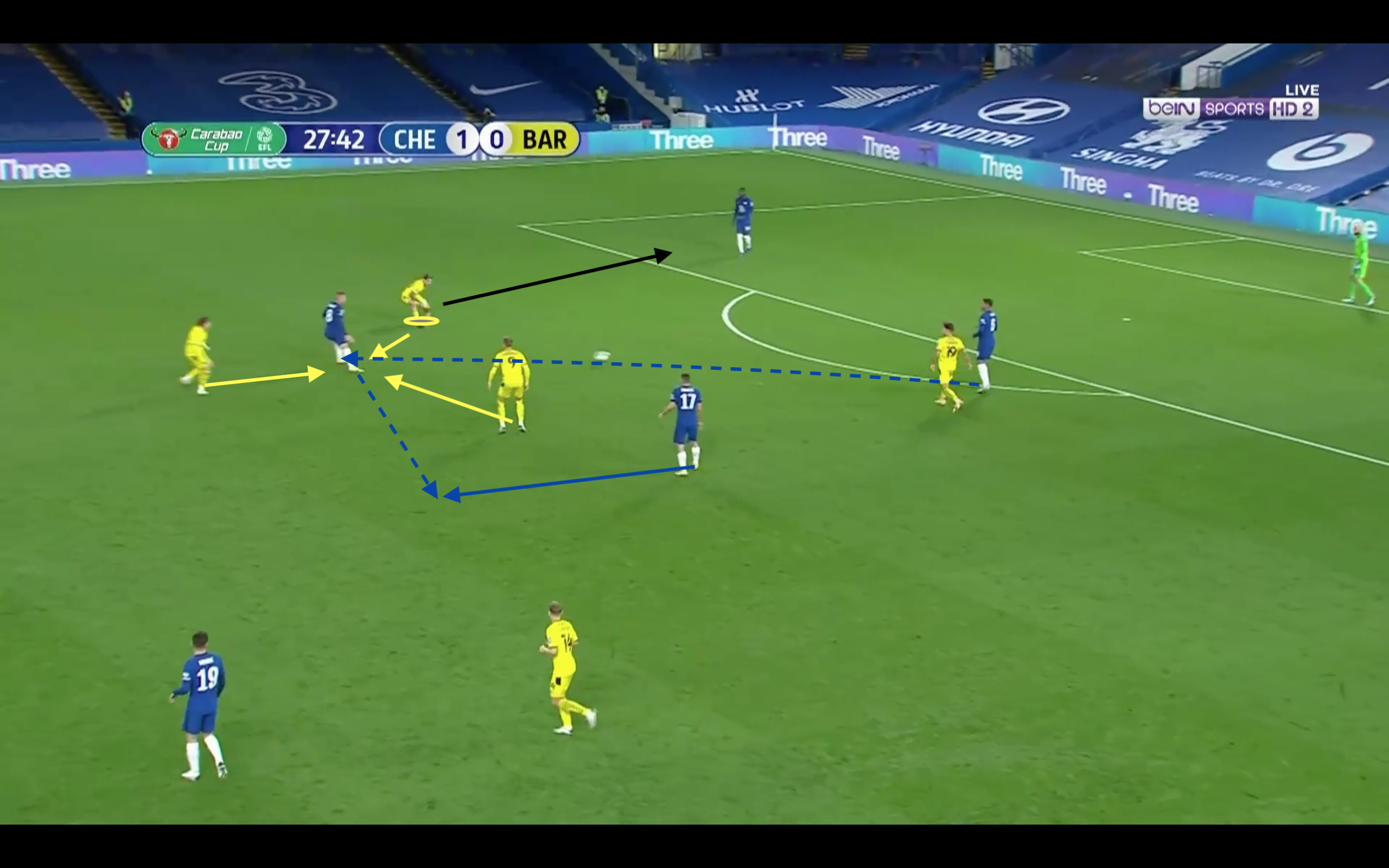 Here, Silva plays the pass to Barkley after Frieser, highlighted, does a great job of ‘stunting’. This is when a player fakes going to go close a player down, in this case, he fakes going to press Tomori, so that it opens a pass that seemed harmless but becomes risky as the player switches directions and closes that player, in this case, it’s Barkley. Now Barkley has three Barnsley players on him but he keeps the ball fantastically well, holding off two players with his strength while keeping great control of the ball. Kovačić moves into the open space and Barkley finds him, which now takes three players out of the game and gives Kovačić space to drive into. This technical quality gets Chelsea out of a potential problem and they go on to score in this move after a fantastic dummy by Abraham for Havertz to score.

It should be noted that Barkley had a lot of success in ball progression from deep in this game because of Barnsley’s sometimes disjointed press but also seemed to over prioritise Kovačić’s ability which left the Englishman open. This move isn’t indicative of this success but Barnsley tried to trap Barkley by making him the pressing trigger but his technical quality proved to be too good in this case.

While Barnsley’s press was hit and miss, the same cannot be said for Chelsea who were able to force crucial game-changing errors that ended the game for them. The Blues aren’t renowned for their pressing but they have made a huge improvement under Lampard in this department. 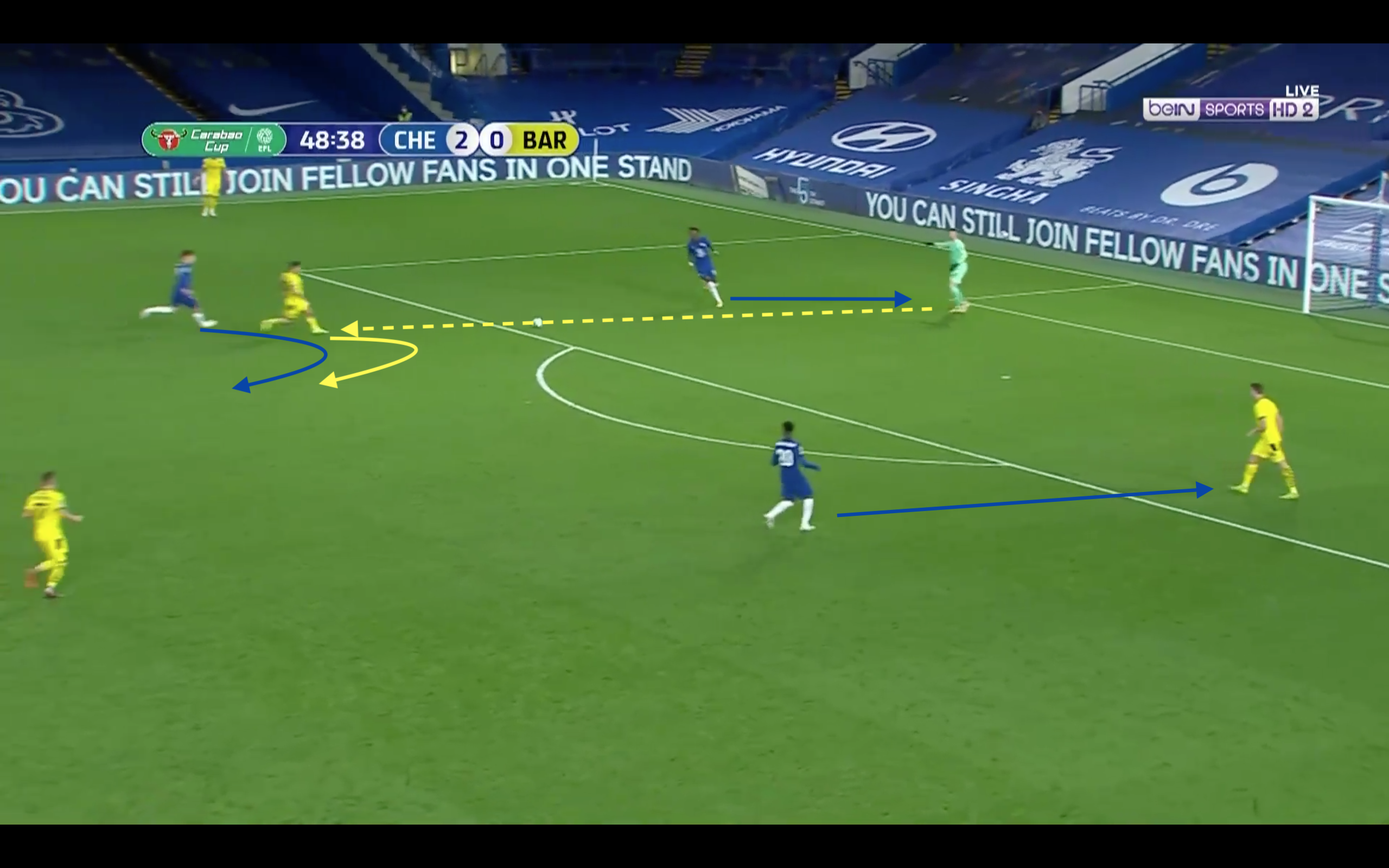 Just like Barnsley did, Chelsea goes man to man when Barnsley looked to build-up from the back. Here, Abraham closes the goalkeeper after forcing the pass from the centre-back and Hudson-Odoi closes down the left-back. The midfielder on the left is closed by Barkley offscreen and thus, the keeper has two options. The first is to go long, which likely results in Chelsea winning the ball and the second is to play the pass short to Mowatt. The captain is closed down by Havertz so he decides to turn out of the pressure but Havertz makes a fantastic slide tackle to win the ball back. Barkley makes a run from deep and collects the ball to finish easily past the keeper to put Chelsea up 3-0. 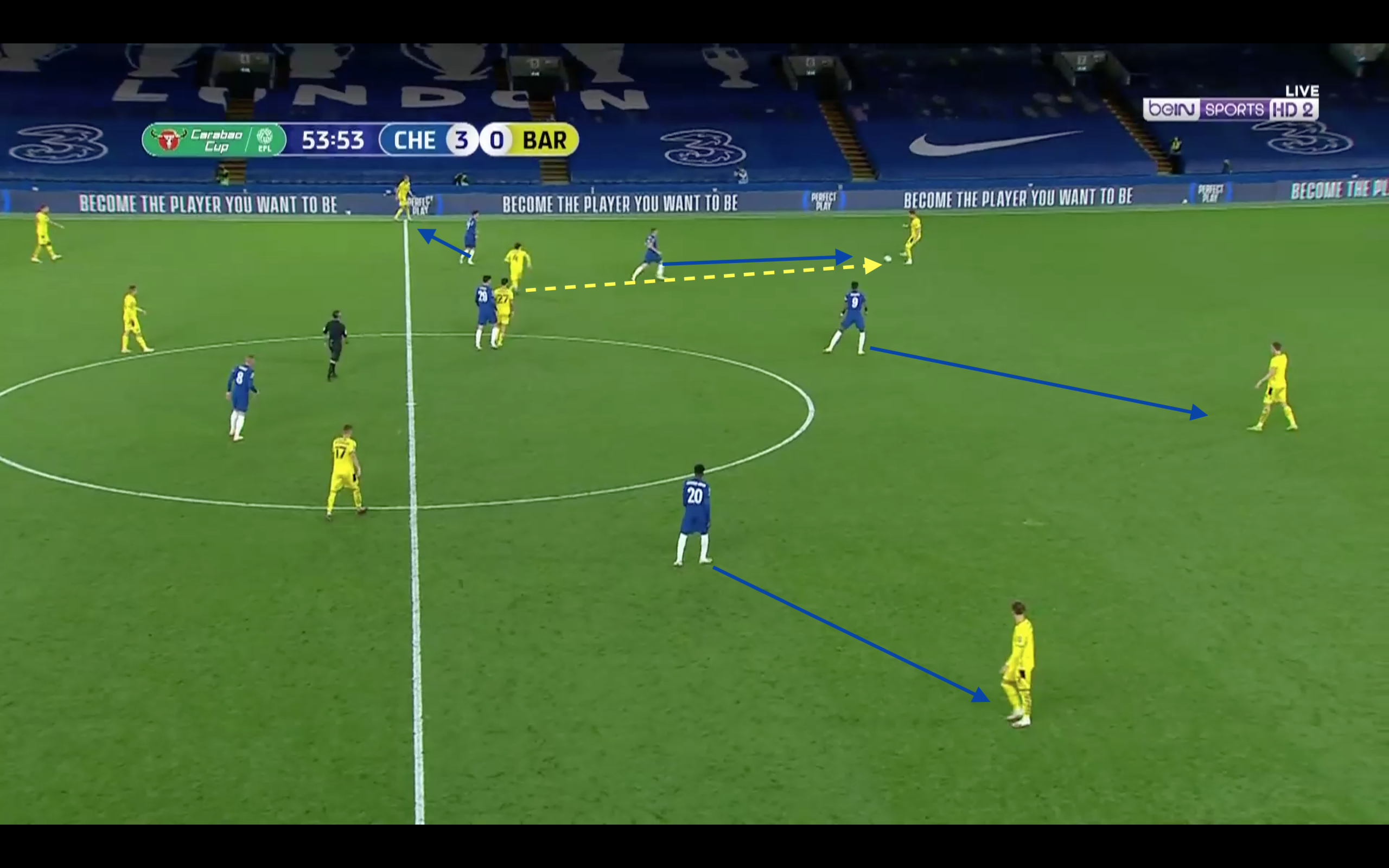 Again, a similar thing happens in this example. With Chelsea up 3-0, the Blues players are taking it easy apart from Kovačić who sprints out to press Sollbauer after he receives the pass. However, Chelsea are in a good position in terms of their structure, albeit it’s very basic and easy to do, as each player is close to a Barnsley player and thus making nearly every passing option useless. As Sollbauer receives the pass, he recognises this and panics, which leads to him failing to control the ball and Kovačić wins the ball back easily to set up Chelsea’s fourth and put this game beyond any doubt.

These two examples are very simple actions but when a gegenpressing is deployed, it can force the opposition to make a mistake and against Barnsley, they made three of that kind, which led to goals. The first goal by Abraham happened because the striker pressed the defender as he received the pass and outmuscled him for an easy one-on-one.

Despite the gaming ending in a 6-0 rout, Barnsley made it tough on Chelsea’s defence and had plenty of opportunities to score, especially in the first half. The mistakes they made in the second half via Chelsea’s pressing were non-existent and their build-up play and t pressing helped them have good attacking opportunities.

Although they had good chances to score, an area they could have targeted was the cut-back. Lampard opted for a double pivot of Kovačić and Barkley, which is quite an attacking double-pivot. It proved to be a success as Barkley added good offensive value to the side from deep but he was a liability when it came to defending – an exploitable area. 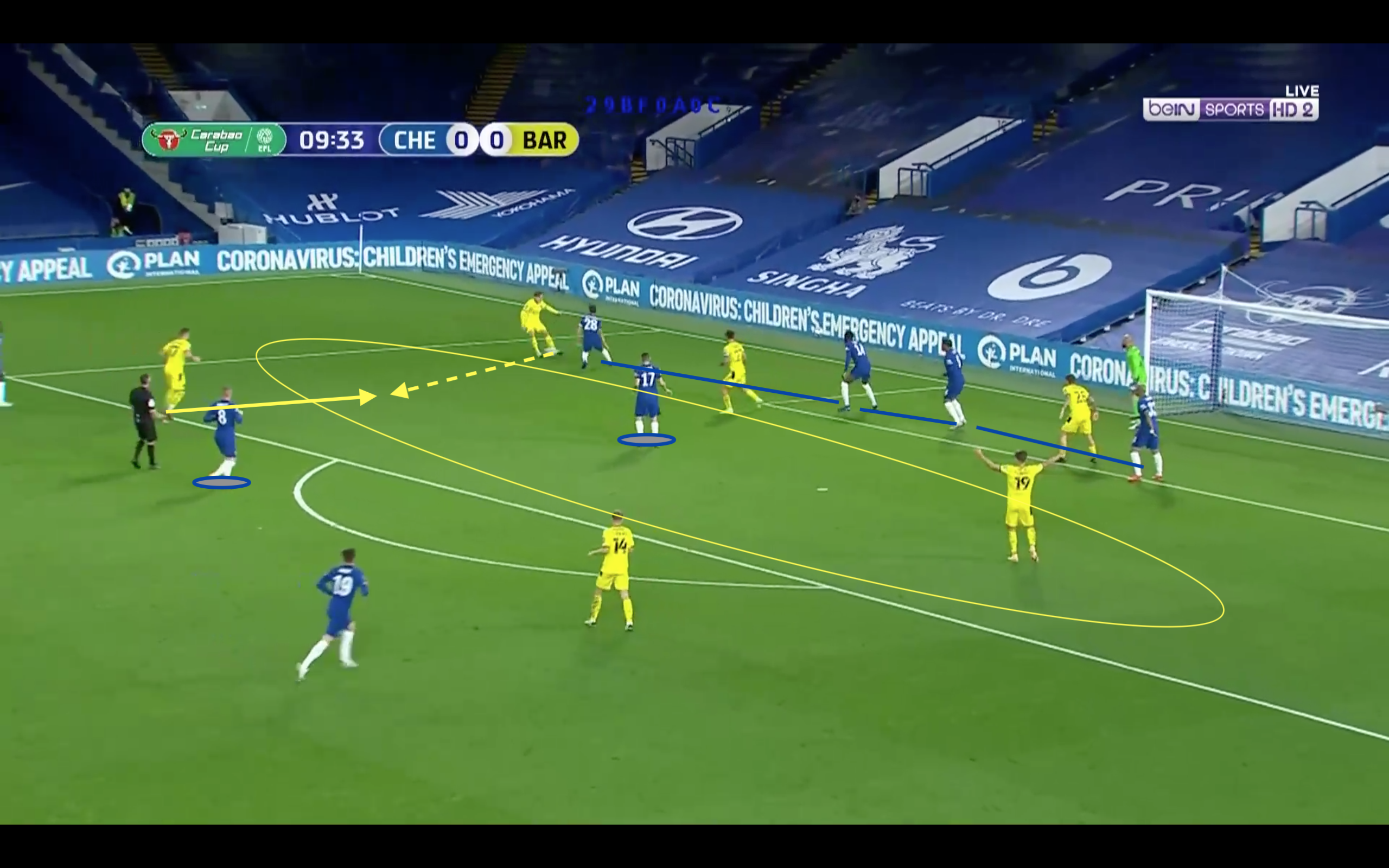 Here, just 10 minutes into the game, Barnsley accidentally find themselves in a situation for a cut-back after a cross was blocked. You can see the space either side of Kovačić, which is created by Barkley not tracking back and doing his defensive duties and the distance between them being too large. This leads to a shape looking like a 4-1-1, with the defence extremely deep as they’re looking to block the pass across goal. In this scenario, the pass is cut-back but the opportunity goes awry after a poor touch. Ideally, you’d want the player receiving the ball closer to the pocket of space. 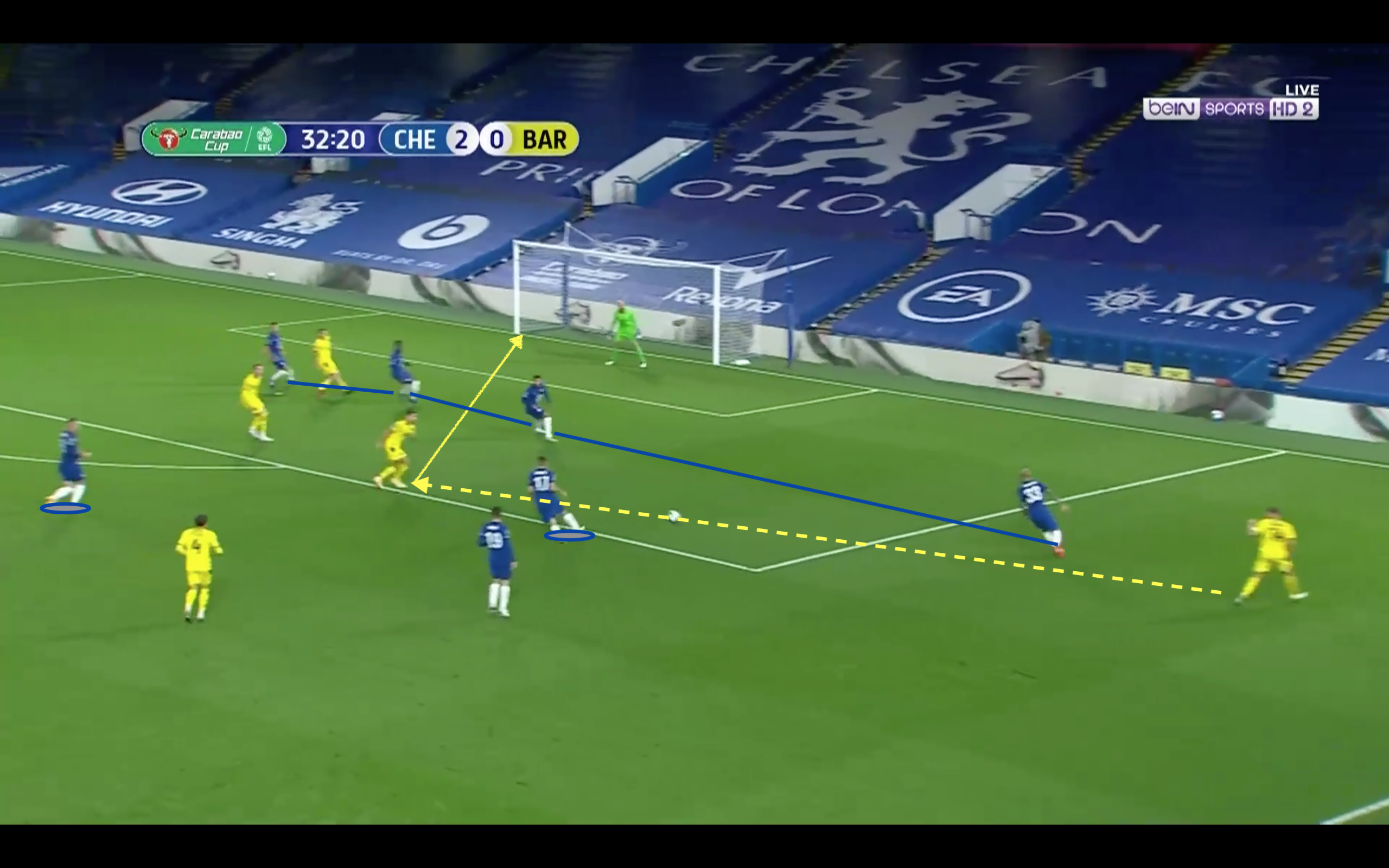 In this example, Barnsley do create a great chance via a cut-back. While Barkley and Kovačić are in a similar horizontal plane, they both get caught in this example as Barnsley’s attackers find space in-between the double pivot and back four – an advantage of using the cut-back. Here, the pass is cut-back and Schmidt forces a great save from Caballero.

While the attacking tactics from Struber were good, he could have made his team exploit this better. You would want cut-backs to be from a deeper crossing position like in the first example as that would generate better looks for the attacker but they rarely even threatened to use the cut-back. When they did try to do it in the second half, it was stopped well by the likes of Silva and Zouma who deserve credit for reading the play well.

Hopefully, this analysis provides some insight into how Chelsea were able to ultimately dominate their opponents. Barnsley put up a great fight in the first half and played some attractive football but a mistake heavy performance against top-class opposition almost always ends poorly.

Lampard will hope that his side can carry this form into their next match, which is against West Bromwich Albion away from home in the Premier League. Meanwhile. Barnsley welcome Coventry City in their next game where they will look to gain crucial points in their fight for survival.