The first match of the new EFL Championship match week saw the last ever west London derby at Griffin Park between Brentford and Queens Park Rangers.

The Bees are looking to maintain their promotion push and increase the pressure on the top two here so the first season in their new stadium can coincide with their inaugural campaign in the modern-day Premier League. Their last league fixture saw them put in an excellent performance away at Bristol City, winning 4:0.

QPR come off the back of two consecutive demolition jobs against the Welsh sides residing in the EFL Championship. On New Year’s Day, they beat Cardiff City 6:1, while in the FA Cup third round Swansea City were comprehensively swept aside 5:1. Nahki Wells will be looking to start where he left off after scoring a hat-trick against Cardiff.

This tactical analysis will look at the tactics used by Brentford and QPR respectively in this EFL Championship. We will also use analysis to investigate the tactics that got Brentford the win. 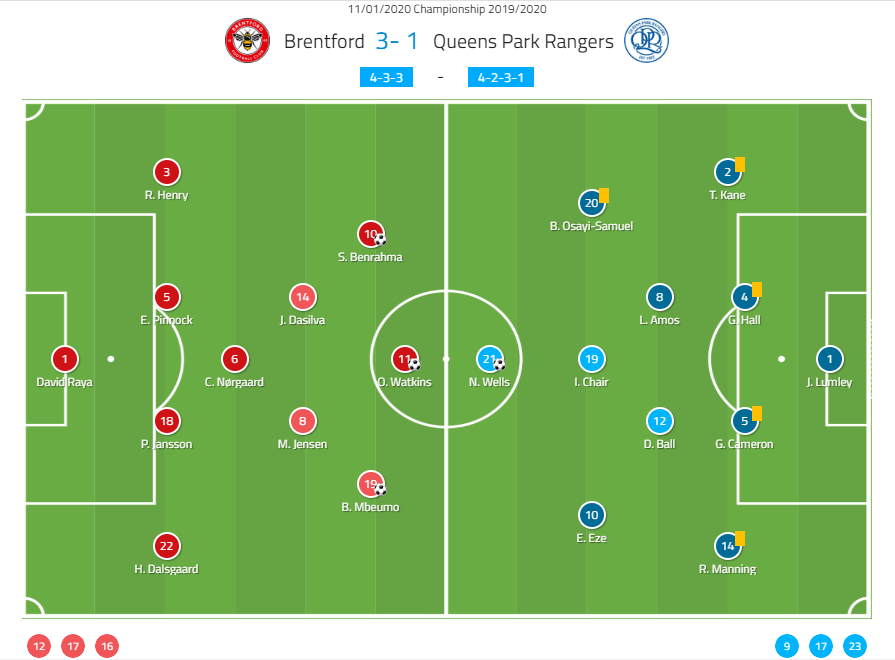 Brentford boss Thomas Frank finally seemed to be able to pick his best 11, with Henrik Dalsgaard coming back into the side at right-back. Christian Nørgaard made his second start in a row after injury problems caused him to miss a section of the Christmas period. He was joined in the midfield by technician Mathias Jensen and box-to-box supremo Josh Dasilva. The attacking trio made up of Saïd Benrahma, Bryan Mbeumo and Ollie Watkins intuitively dubbed “BMW” are looking to build upon their combined total of 33 goals and 11 assists.

Unsurprisingly, after scoring 11 goals and conceding two in their previous two, QPR head coach Mark Warburton kept the same six players in the midfield and attacking positions. Toni Leistner had been ruled out injured, Todd Kane replaced him, with Geoff Cameron shuffling across into centre-back. Additionally, Ryan Manning came in for LJ Wallace.

The aforementioned potency of the Brentford attacking trio means it’s imperative to maintain a compact defensive shape during the Bees’ build-up. For the most part, the execution of this was good – when settled into a visible, structured defensive shape. However, the away sides determination to laterally and vertically stretch the play during build-up of their own instead played into the home sides hands.

The ball-carrying ability and skill to play incisive through balls from the likes of Dasilva, Mbeumo and Benrahma saw them exploit space left unoccupied by the structure QPR deployed in their own attempt to feed the ball into offensive players such as Eberechi Eze.

Full-backs Kane and Manning commonly chose to refuse to aggressively venture past the halfway line when their centre-backs were in possession. To compensate for this lack of adventurousness central-midfielder Luke Amos had license to support and offer options to the attacking quartet, leaving Dominic Ball as a single, covering midfielder. Ball was hooked at half-time due to being outmanoeuvred by the nimble Brentford attack, who were exposing his poor positional awareness in this particular game. 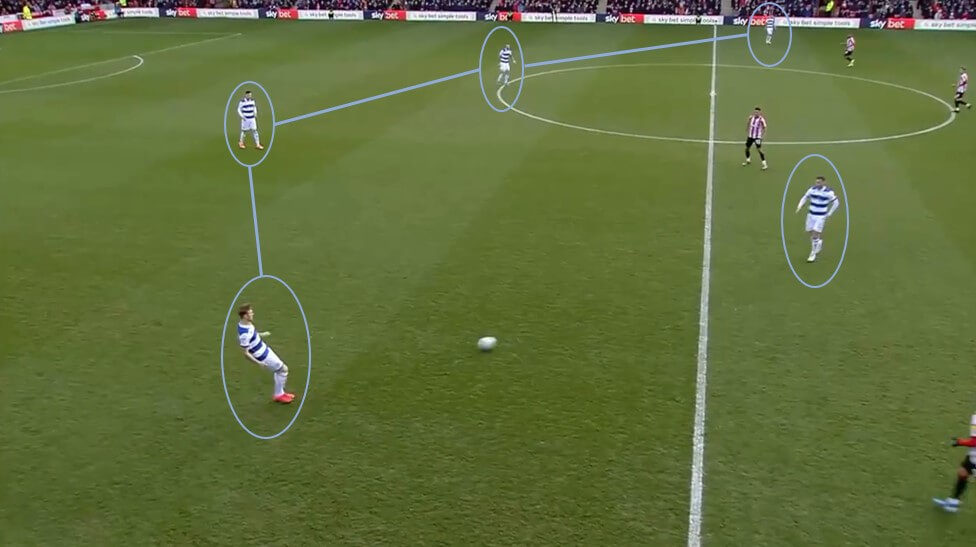 In this example above the passive positioning of the full-backs can be seen as well as Ball’s role as an anchor. Below is a still from the same move of which Amos is taking up an advanced position between four Brentford players, in the half-space. 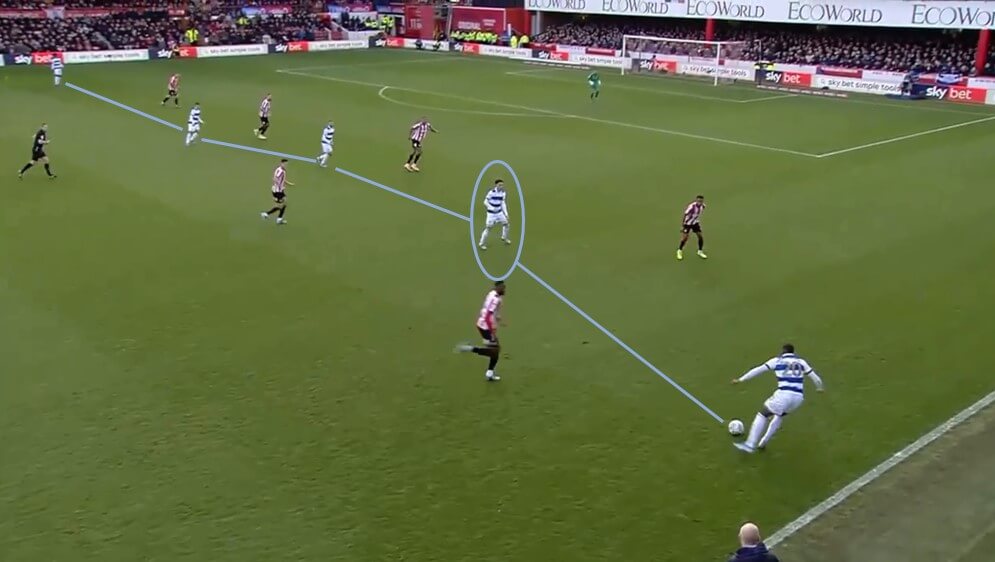 Defensively Brentford chose a 4-5-1 to restrict spaces when out-of-possession. Nørgaard lined up on pretty much the same line as Jensen and Dasilva. The Danish midfielder has excellent tenacity in addition to being able to successfully break up the play. The stats back this up; he registered five tackles, plus four interceptions.

The home side sat in a mid-block and only engaged when QPR entered the central third. This was when a midfielder sprang out in acknowledgement of a pressing trigger, such as entering this third. Others include an overhit pass backwards, a pass deep in the full-back zone and the opportunity of a recipient of a pass being pressed on his blindside. 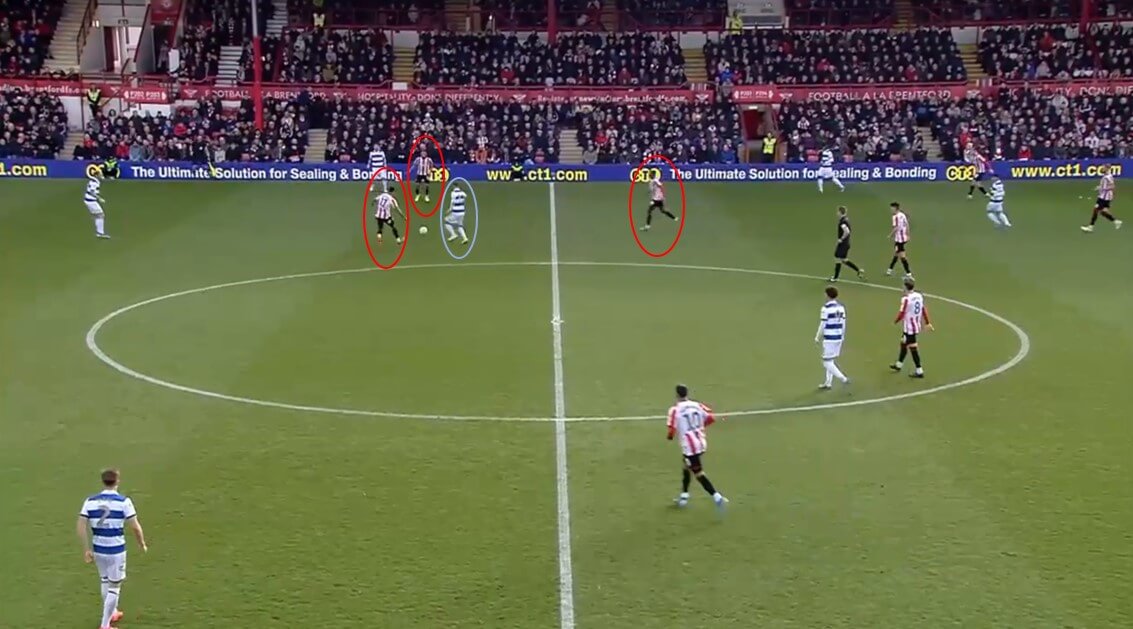 For the second Brentford goal, shown below, an error in the form of a weak kick by the unreliable keeper Joe Lumley gave Nørgaard the chance to put Mbeumo in. With left-back Ryan Manning was caught upfield, there was a no pressure on Nørgaard to make a difficult lofted pass harder and Cameron produced a clearance that was entirely ineffectual. 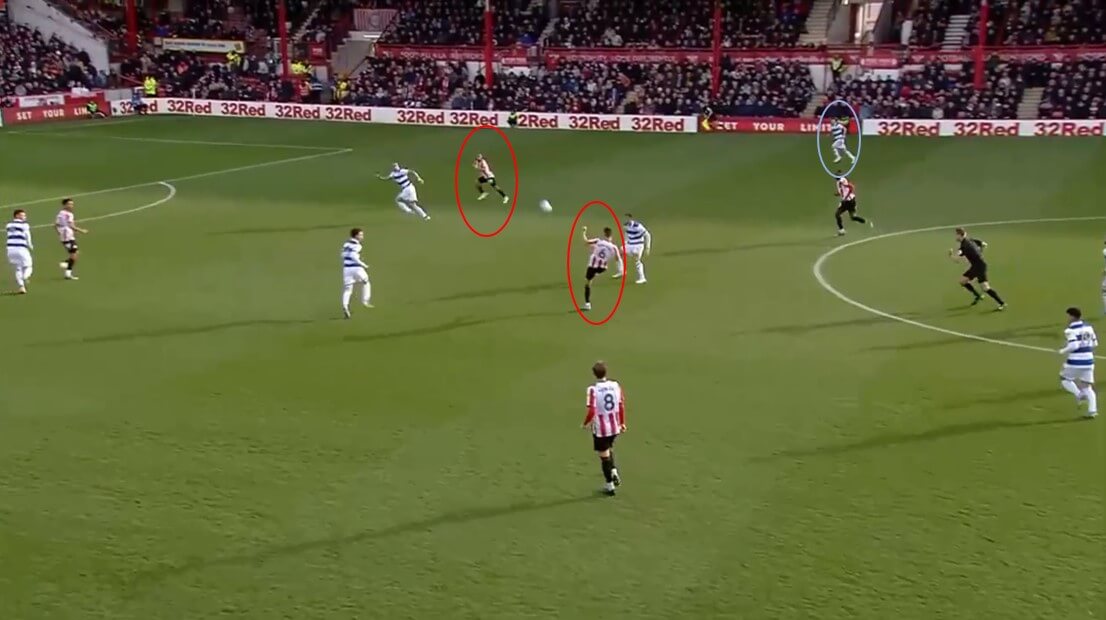 In another similar situation below, Nørgaard has once again nicked the ball, with it falling to Watkins. Nørgaard’s aggressive tackle has meant that every midfielder and attacker for the home side are present in the final third. Compare this to the unorganised state of QPR with just the back four and Chair in view and both Ball and Amos not detectable. Kane was forced to make scything tackle here, giving away a free-kick, but, as we will now come onto, these were also a speciality of the Bees. 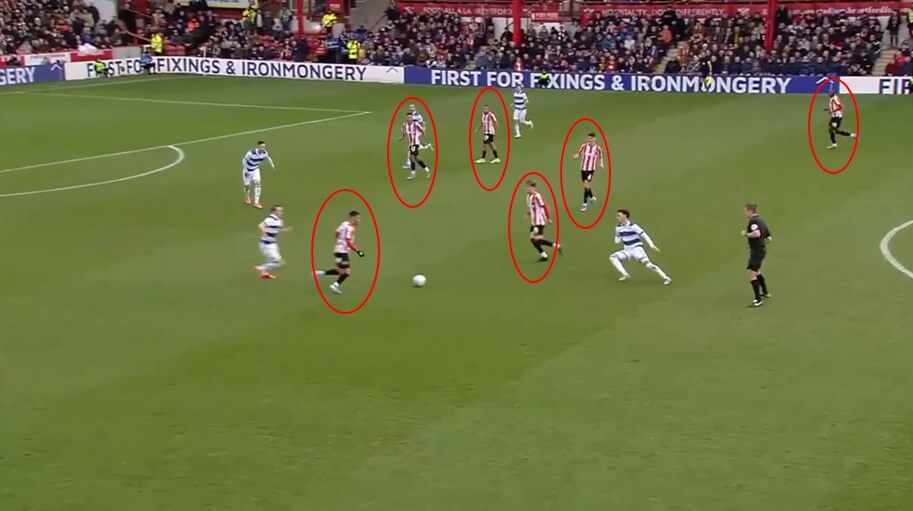 The aggression of Nørgaard pushing up onto the QPR double pivot together with Jensen and Dasilva being there already in their designated positions as well as Watkins dropping back overloaded the central areas and routinely gave them numerical superiority so they could regain possession and counter.

Inventive set-pieces give Brentford the edge

In the summer of 2019, Pep Guardiola took Brentford set-piece coach Nicolas Jover to the Etihad. He has since been swiftly replaced by Andreas Georgson, whose job title includes Head of Set Pieces. Having a dedicated coach on the payroll sums up Brentford’s unique and distinctive strategy for achieving marginal gains.

A set-piece got Brentford off and running and essentially secured them the three points with the third.

The first goal’s set-piece routine (above) transpired to be cut-back from a free-kick on the right edge of the penalty box. The goal scorer, Benrahma, started as the furthest player from the ball but made a curved run to eventually finish from near the penalty spot. Dasilva created confusion by a dummy run, leaving midfield partner Jensen to execute the cut-back. Additionally, a trio of Watkins, Pontus Jansson and Ethan Pinnock acted as blockers to stop Benrahma’s shot being blocked itself and give the Algerian sufficient space. 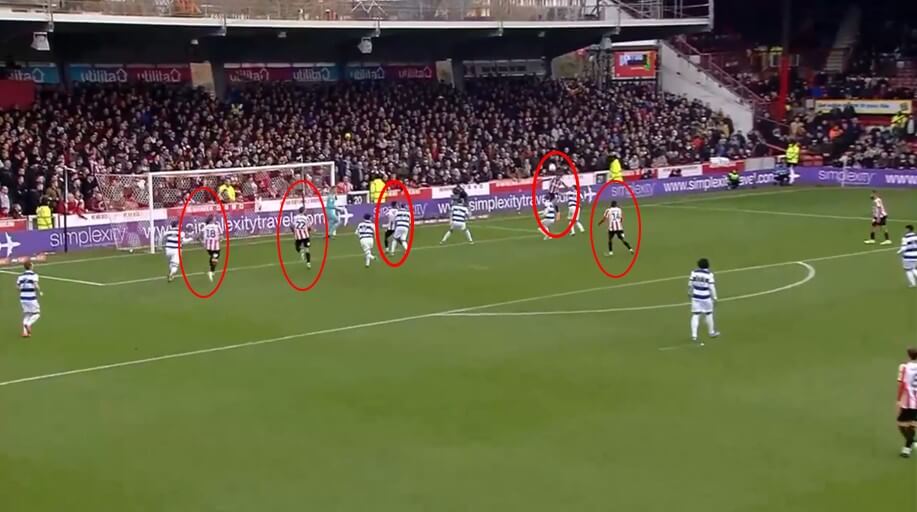 The second set-piece goal (above) was more traditional in its ways. Ethan Pinnock, who stands at 6’ 1”, is placed at the back-post. The 26-year-old has aerial superiority over his marker Manning who is two inches shorter and physically weaker. Poacher Watkins got his inevitable goal by staying central and nodding in Pinnock’s header, which was back across goal. Also, note the presence of the sizeable Jansson and Dalsgaard both following in as well in case Watkins missed the ball. Dasilva peeled off deeper instead ready for any clearances. Watkins is now joint-top goalscorer in the EFL Championship with 18 goals.

The EFL Championship has undergone a stylistic shift in recent years, adjusting to the modern trend of intricate technical play. Brentford, and their recruitment policy, have been one of the trailblazers. Jensen, Nørgaard and Mbeumo are all technically proficient players who were signed from clubs on the continent last summer.

Jose Mourinho’s differing usage of his full-backs in his Tottenham Hotspur side has been the topic of much discussion. Frank opts for a similar approach. Left-back Rico Henry possesses much greater attacking instincts that his opposite Dalsgaard. Therefore, in tune with left-winger Benrahma’s tendency to drift inside between the lines, Henry is allowed to get forward regularly. In addition to this, Dalsgaard’s defensive attributes are better suited for a more conservative role – his presence can help curb counter-attacks – and at 30-years-old (eight years more than Henry) he lacks the energy to get up and down the touchline.

Henry pushing up can force the right winger to track back, nullifying their attacking threat partially down that side. Benrahma is most effective in central areas of the pitch with a freer role. Henry going forward provides width down the left flank and maintains balance within the hosts’ attacking structure.

In Brentford’s pass map below that difference in roles between the two full-backs is glaring. Nørgaard has the dual responsibility of shielding the defence and being a single pivot, thus having play predominantly flow through him. Mbeumo also is positioned slightly wider than Benrahma, giving him more space for his direct dribbling cutting inside onto his favoured left foot.

This comfortable win for Brentford adds to the belief that this really might be their year. Their offensive ruthlessness and quality are superior to most in the league, alongside a defence that has conceded the least. Dropped points for both West Brom and Leeds in the 3 pm kick-offs gives the Bees encouragement that the automatic promotion places are still a realistic target if they maintain consistency and form.

QPR as a club are in a state of transition. Warburton has given the Hoops an identity and implemented an attractive style of play but a fragile defence is letting down a solid attack. They are currently seven points of the play-off places and with 19 games remaining this season, they’ll need to embark on an exceptional run of form imminently to be a contender in the backend of the season.