How did Ajax dominate Real Madrid?

Make no mistake about it, Real Madrid are football royalty. They have been crowned European Champions for the last three seasons and even now, as they undergo a season of transition, they are exceptionally dangerous. If Real Madrid are kings, however, then Ajax are princes of the game. Long held up as an example of how to develop youth players we are seeing Ajax start to play on the field as well as they are regarded off of it.

At Real Madrid, we have seen significant unrest this season. When club legend Zinedine Zidane chose to step down at the end of last season he did so after winning the Champions League over Liverpool. The club originally turned to the Spanish national team coach Julen Lopetegui. It was, however, quickly apparent that the Spaniard was out of his depth and the club and he has since been replaced by the former Ream Madrid player Santiago Solari.

Ajax, on the other hand, are relatively stable this season. Dutch coach Erik ten Hag was appointed last season and is now in his first full season in charge at the club. Over the summer they retained the majority of their key players, with the exception of Justin Kluivert, and they recruited intelligently.

When the draw for this match was made there was an argument that Ajax may actually have been favourites. They had impressed in the group stage despite a difficult group and were playing well domestically. Real Madrid, on the other hand, were struggling for consistency both in Europe and in domestic competition. Since the draw was made we have seen Ajax stumble domestically, including a 6-2 loss to fierce rivals Feyenoord. Real Madrid have at the same time rediscovered their consistency and are starting to find their swagger. 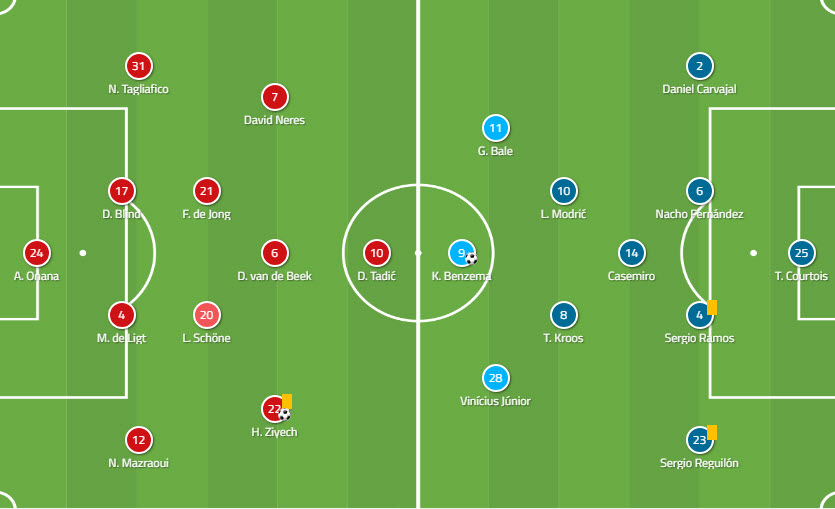 There was a slight surprise with the Ajax team news in that the Brazilian winger David Neres came into the team to play in the wide areas. This saw the Serbian attacker Dusan Tadic moved centrally although in truth Ajax played the match without a fixed striker. The Barcelona-bound Frenkie de Jong was the headline act in midfield and Matthijs de Ligt is the key man in defence. 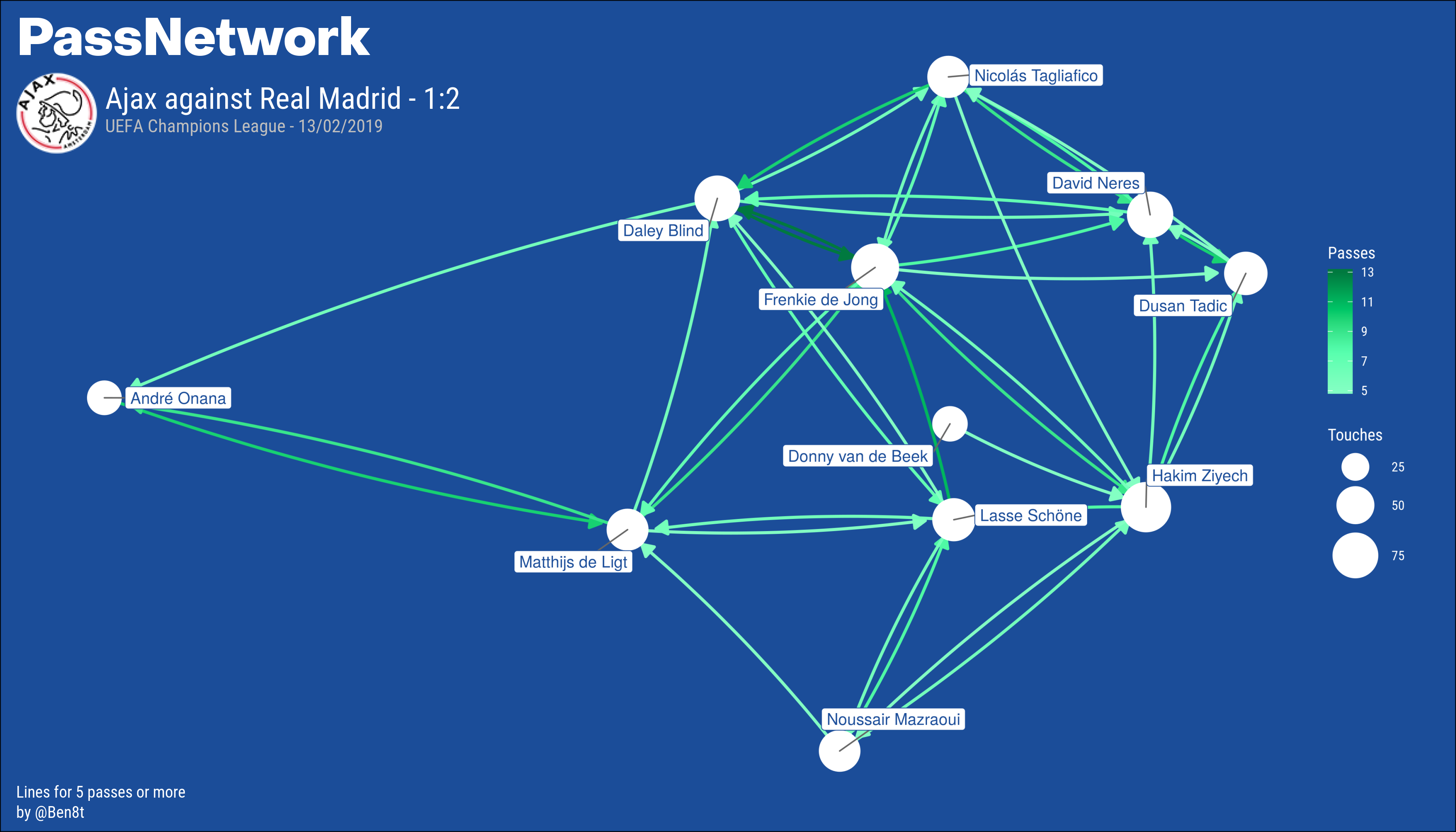 The pass network above shows that Neres and Hakim Ziyech on the other side played relatively close to Tadic and on the same line as the Serbian. This narrow positioning saw the three of them interchange positions from time to time.

The Real Madrid team news headline was that the left back Sergio Reguilon continued at left-back with the Brazilian international Marcelo continuing to be marginalised. In attack, Karim Benzema played centrally whilst Gareth Bale and Vinicius Junior played in the wide areas.

One of the key factors in the match, or in the first half at least, was the method that Ajax used to press the ball and disrupt Madrid as they tried to progress the ball forward. As the Spanish side tried to settle into the match they were hounded continuously by Ajax as they pressed and forced the ball back towards the Madrid goal. 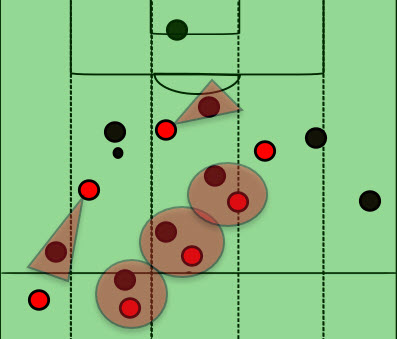 In the initial line of pressure, the Ajax forwards that were closest to the ball at any given moment would press the ball whilst keeping Madrid players in their cover shadow. This essentially means that they would press at an angle that would prevent the ball from being passed to a player behind them.

In the second line of pressure, the Ajax players marked their opponents tightly man to man. This prevented Madrid from being able to play easily into the central areas of the pitch. The way that Ajax pressed ferociously saw Madrid struggle to play with any consistency in attack. 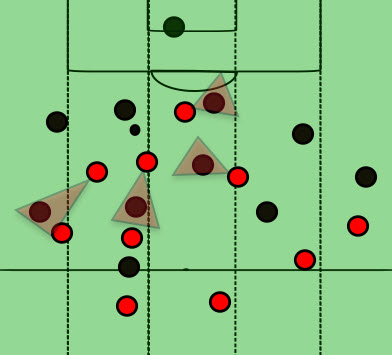 When in possession of the ball Ajax moved forward in waves of attacking pressure that stretched the Madrid defensive structure to breaking point. With technical players of the quality of Hakim Ziyech and Dusan Tadic in the final third Ajax were always dangerous. The key came in the first third of the pitch as Ajax looked to progress the ball forwards into the more technically capable players. 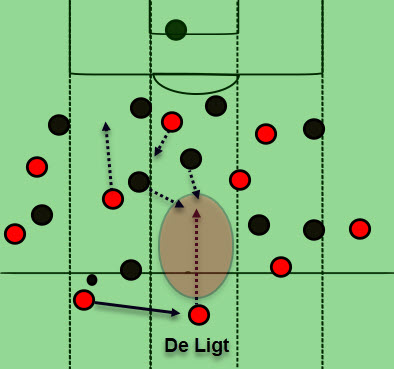 The club captain for Ajax, Matthijs De Ligt, was instrumental for Ajax both in the defensive and attacking phase. Not only is he the best young defender in European football he is also a player with the capability to play and contribute in the attacking phase.

As we can see above Daley Blind is initially in possession of the ball. Instead of looking to play a vertical pass into an area of the field that was congested he plays the simple lateral pass into the central area. When De Ligt takes possession of the ball his first instinct is to drive forward with the ball. As soon as he moves into advanced areas he forces two opposition players to move to engage the ball. As the two Madrid player engage the ball Ajax attackers can move in and exploit the space. 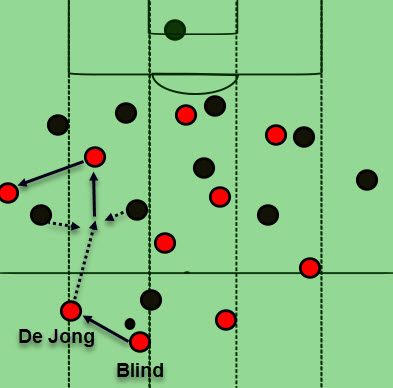 The other method that Ajax used to progress the ball initially saw Frenkie De Jong drop back to the side of the defensive line. He drops deep to pick up possession of the ball before driving forward. As he did so he forced the Madrid players to move to engage him to press the ball. As they do De Jong is able to release the ball at the right time to move through the press into advanced areas.

If the methods that Ajax used to progress the ball forward in this match were impressive their interchanging of positions in the final third was even more so. With no fixed striker holding the highest line we saw Ajax move in and out of it. This movement saw Madrid struggle in the initial phase of the match to find a working defensive structure. 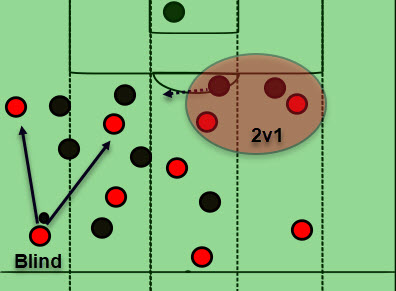 With the ball initially with Daley Blind the pass can either be played to Nicolas Tagliafico, the left-back out wide, or David Neres, who had moved into the half-space. As this pass is played it triggers the far-side defender for Madrid to move over to cover closer to the ball. As he does so he leaves a 2v1 advantage for Ajax on the far side of the penalty area. 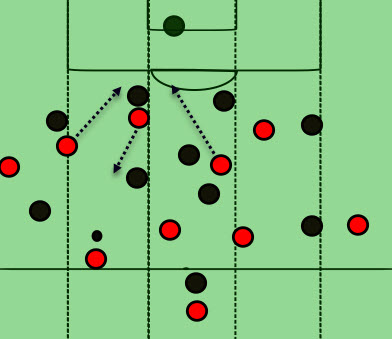 We also saw Dusan Tadic move from the highest line in order to create space in and around the defensive line that could be exploited by the other attacking players. As he moves deep towards the ball he offers a passing option but it was the movement beyond that which caused Madrid issues.

As Tadic moved deep David Neres and Donny van de Beek would move to the highest line. This constant movement made it difficult for Madrid to effectively defend.

In the end it was something that tactical analysis cannot account for that made the difference in the match. The disallowed goal for Ajax, chalked off by VAR, meant that Ajax went in at the break 0-0 as opposed to having a lead. The winning goal in this 2-1 win for Madrid came late on and left Ajax feeling robbed. On the balance of play they deserved far better.

The second leg in Madrid will be a difficult match for Ajax but they should approach it with confidence having already shown that they are a match for the European Champions.